The Falkland Islands have issued many iconic stamps, notably the Queen Victoria high values in 1898, and the Centenary set of 1933. Yet, in the old days, most collectors relied on just the Stanley Gibbons stamp catalogue and the 1950’s book on Falkland Islands stamps by B.S.H. Grant to help organising their collections. There was a need for a specialist society to research the stamps and postal history, and assist interested collectors.

So, in 1970 the Falkland Islands Philatelic Study Group (FIPSG) was founded following a meeting of some 50 collectors gathered together by Malcolm Barton. A one-page newsletter was produced and the first formal meeting was held in London on 26th September 1970, and its first committee was elected.

By September 1971 the newsletter had expanded and developed into a regular quarterly journal, “The Upland Goose”. This is distributed to all members and to leading philatelic libraries. The publication has been awarded medals at many international philatelic exhibitions. Membership grew rapidly, reaching more than 200 in 1975, and the Group now has more than 350 members worldwide. The Group is truly international in its membership structure.

The object of the Study Group is to research into all aspects of philately connected with the Falkland Islands, the former Dependencies, South Georgia and the British Antarctic Territory, leading to the publication of findings. Research is carried out by individuals or groups of members, collated through a nominated leader for each subject.

The Study Group Weekend meeting takes place annually, normally in March, during which an Annual General Meeting is held. Meetings are also held on a regular basis regionally throughout the UK, and meetings have been held in other countries as well, including the USA, Australia, South Africa, Norway, Sweden, Finland and the Falkland Islands.

The group is in the forefront of specialist philatelic societies and has belonged to the national Association of British Philatelic Societies since its inception, and actively participates in its activities. To commemorate its Silver Jubilee in 1995, the Group was honoured by the Royal Philatelic Society of London by an invitation to display material of the Falkland Islands. The display of 52 frames took place in January 1995 and was outstandingly successful. The Group has now received an invitation from the current President to present a Golden Jubilee display of Falkland Islands philately at the new headquarters of the “Royal” at Abchurch Lane, London, opened in November 2019 by Her Majesty the Queen. 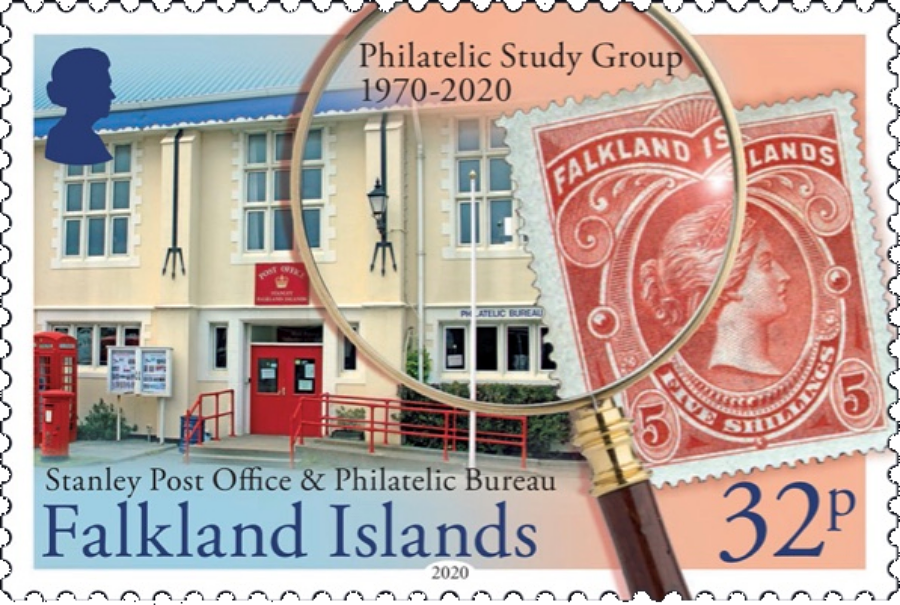 32p Stanley Post Office & Philatelic Bureau – many Study Group members buy stamps from the Philatelic Bureau and have visited the Post Office while in the Falkland Islands. The Post Office also provides information on the postmarks and cachets used, and the postal rates employed. The 1898 Queen Victoria 2/6d and 5/- stamps (the 5/- is illustrated here) were once voted as the most beautiful stamp designs in the world. 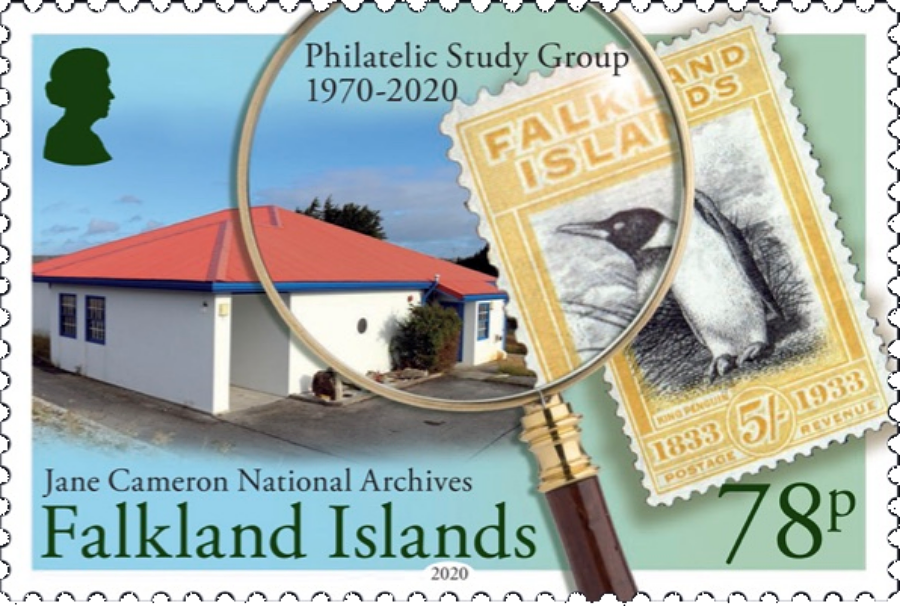 78p Jane Cameron National Archives – many Study Group members have used the research facilities at the Archives either by visiting or using the extensive online facilities. Information is held on stamp designs and proofs, correspondence between the Falkland Islands and Crown Agents, numbers of stamps ordered and destroyed, and shipping records. These provide vital information for specialist collectors. The iconic 5/- King Penguin stamp from the 1933 Centenary set is illustrated here. 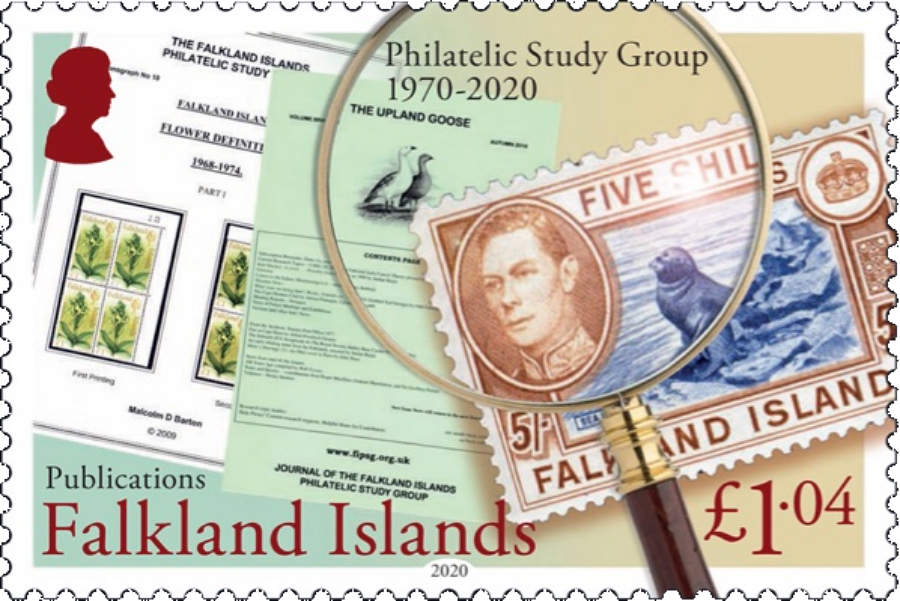 £1.04 Publications – the Study Group magazine Upland Goose is published four times a year showing the latest research and news about Falkland Islands philately. In addition, a colour supplement of the annual Weekend meeting of the Study Group in the UK is produced. Some twenty monographs on specialist aspects of Falkland Islands collecting have also been published over the years, and these are distributed free to members. The 5/- King George VI definitive stamp was in use between 1938 and 1952. 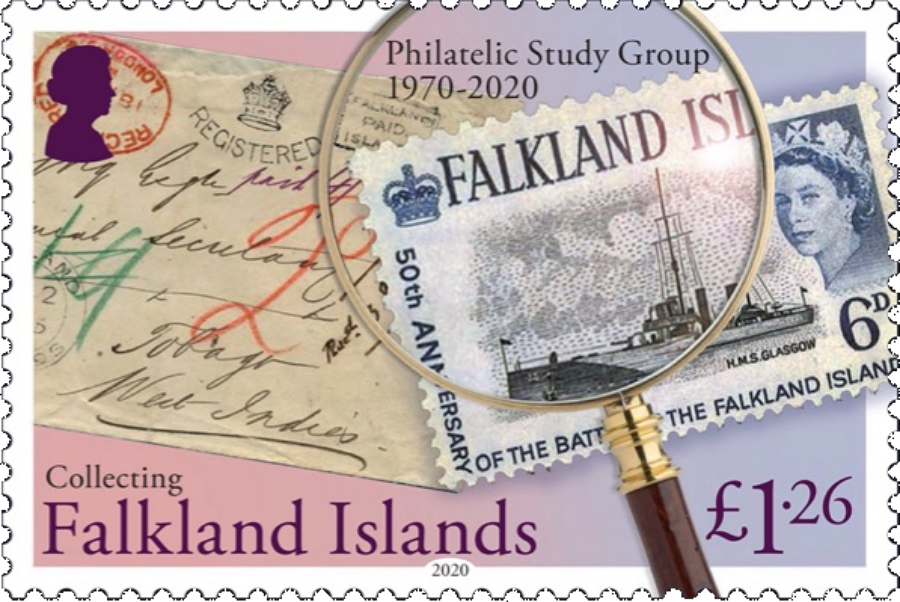 £1.26 Collecting – there are more than 350 specialist Study Group members worldwide, and many more interested Falkland Islands stamp collectors. A catalogue of Falkland Islands, South Georgia and BAT stamps is regularly published by Stefan Falkland Heijtz FRPSL. This also includes many other aspects of Falklands philately, including varieties, postmarks, and specialist subjects such as whaling mail, air mail and the 1982 Falklands War. The stamp also depicts the precursor to Falkland Islands stamps, the 1869 Black Frank and one of the most famous stamp errors, the 1964 Battle of the Falklands 6d. with the incorrect ship in the centre, HMS Glasgow rather than HMS Kent. 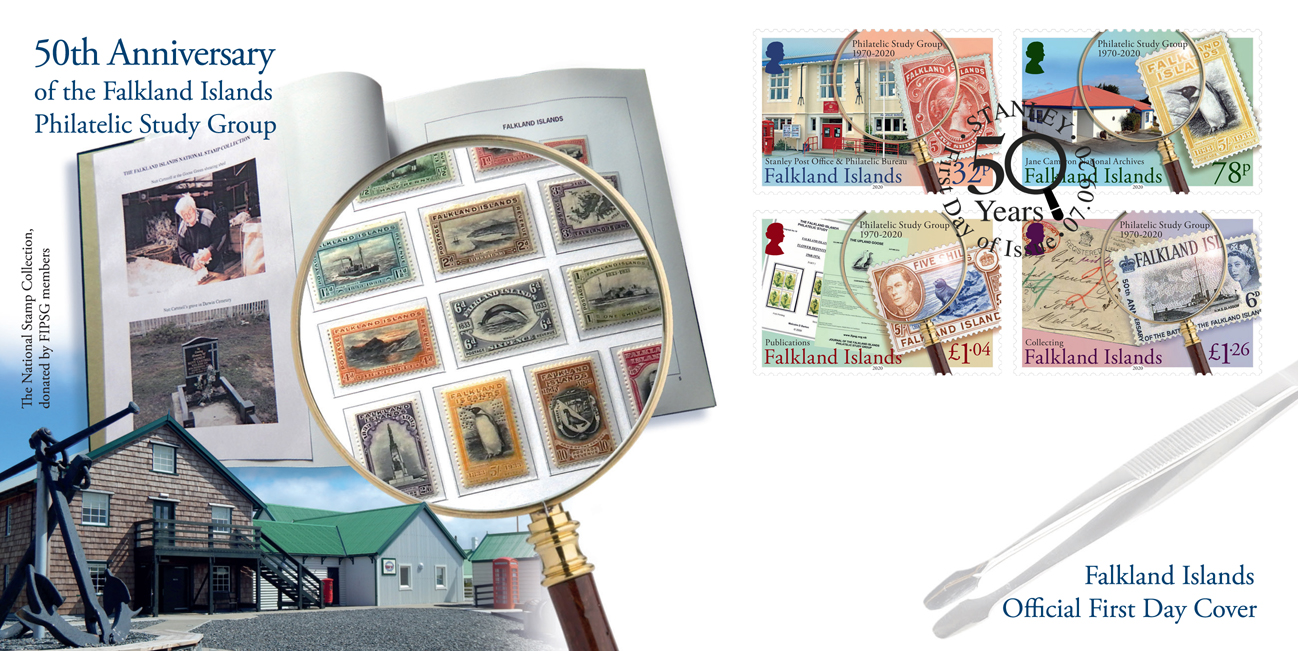 The First Day Cover shows the Historic Dockyard Museum in Stanley and the National Stamp Collection. This collection is on display in the Museum – it was put together mostly by members of the Study Group and donated to the Museum in 2010. The page illustrated shows the 1933 Centenary set and a picture of Nutt Cartmell and his grave in Goose Green. Nutt was probably the most well-known local stamps collector in modern times, and the National Stamp Collection was created in his honour.