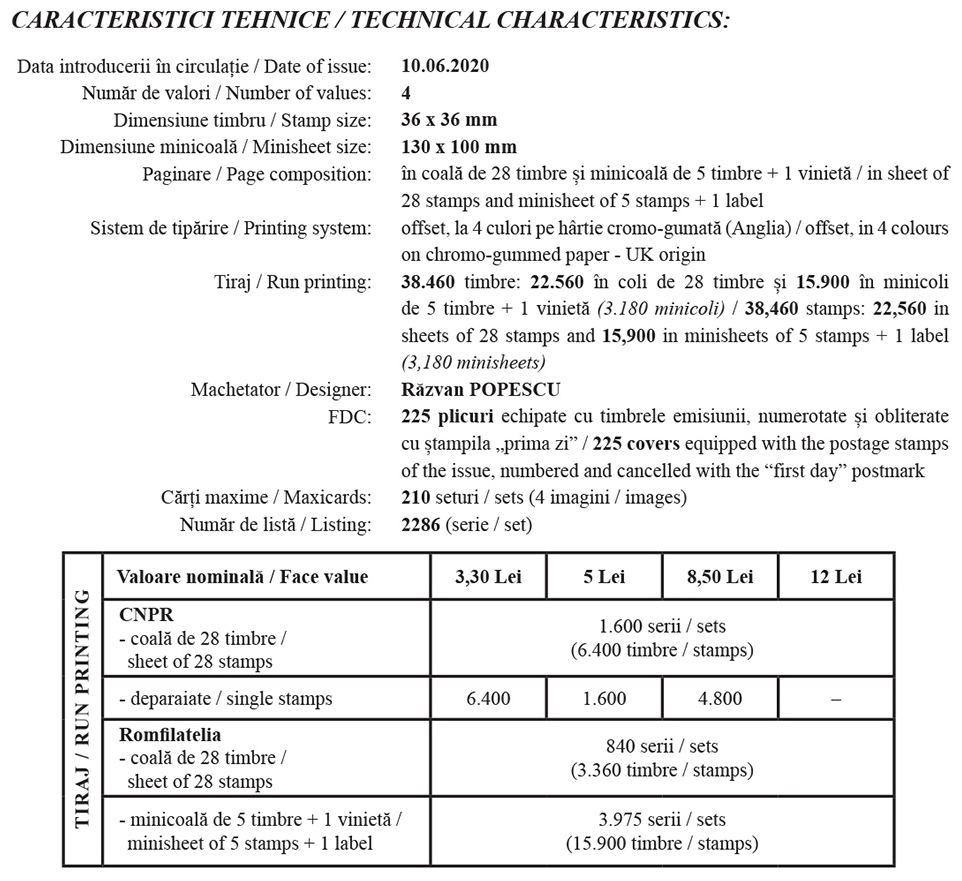 Romfilatelia offers to collectors a new philatelic theme dedicated to Fauna, through the postage stamps issue Squirrels, which will enter into circulation on Wednesday, June 10th, 2020.

Squirrels (Sciuridae family) are mammals that are part of the large group of rodents, the family comprising about 55 species, spreading in the most part of Europe and Asia, and in the New World from southern Canada to northern Argentina. They generally populate coniferous, deciduous and tropical forests, both in wetlands and arid areas. 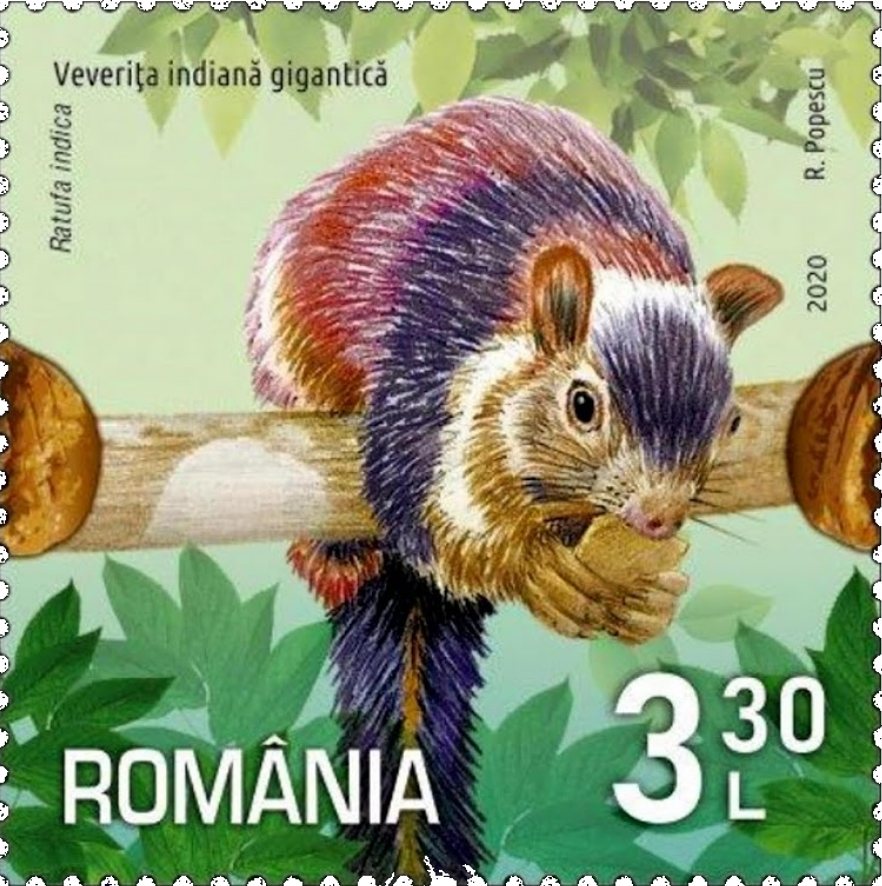 Indian Giant Squirrel – Ratufa indica (Erxleben, 1777), illustrated on the stamp with the face value of Lei 3.30, includes four species that, as the popular name suggests, are large species, the length of the head and trunk reaching up to 457 mm, to which the tail of approximately the same length is added. The weight is between 1.5 and 3 kg.

The Indian Giant Squirrel comprises four or five recognized subspecies, one of which has the potential to be considered a distinct species, all being endemic to south-western, central and eastern India. It is found at altitudes between 180 and 2,300 m, in a strongly fragmented area, where, locally it is a relatively common species in the areas where it lives.

It is a diurnal arboreal species, which populates exclusively the tropical wet forests, without entering the plantations. It lives in the canopy of very tall trees where it also finds its food sources made up of fruits, nuts, shoots, the bark of some trees, insects and even bird eggs.

They do not descend to the ground unless they are chased from trees by a series of predators. The jumps they make during these movements can reach up to 6-7 m in length. When walking for food, they do not keep their tail lying on their backs, as other squirrel species do, but move it in various positions, in order to maintain balance. They usually live alone and hidden in the dense vegetation of compact forests. Reproduction takes place several times a year and gestation lasts 82 days. Longevity is up to 16 years. 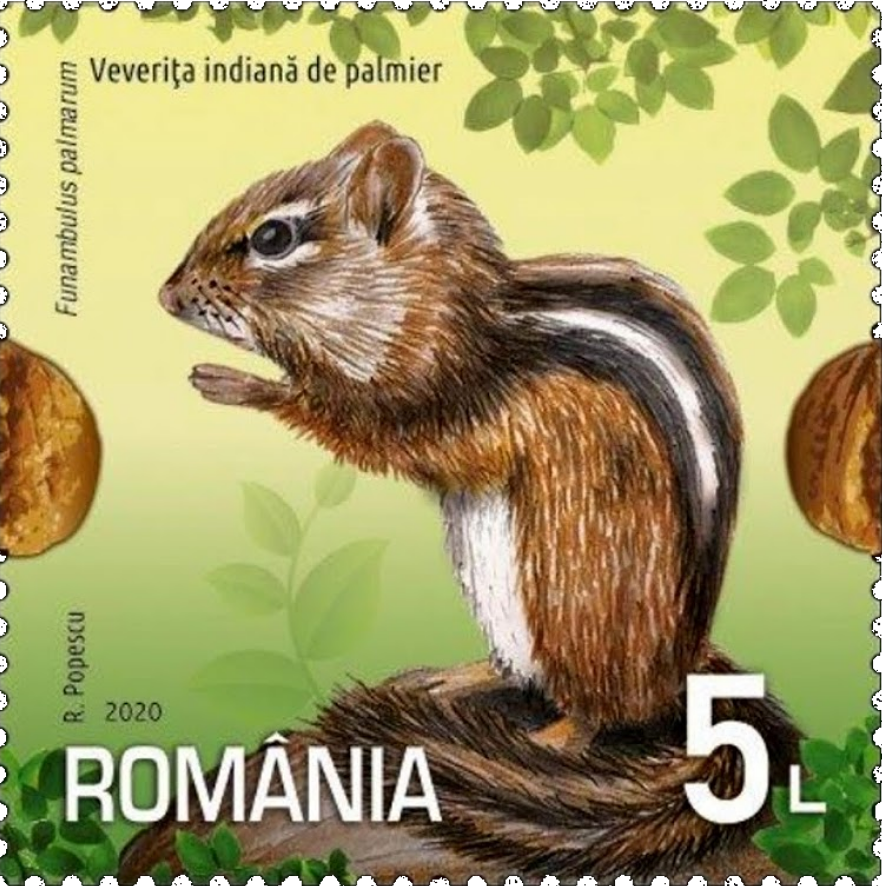 Indian Palm Squirrel – Funambulus palmarum (Linnaeus, 1766), represented on the stamp with the face value of Lei 5, it is one of the five species of Asian-striped squirrels of the Funambulus genus, whose species are widespread in areas with palms and lowlands in India and Sri Lanka. In the 19th century, the Indian Palm Squirrel was also introduced to other areas outside the native region, including Madagascar, Réunion, Mauritius, Seychelles and Australia, where it causes minor damage.

It is a diurnal, semi-arboreal species, that generally populates tropical rainforests, often entering tea, cardamom and coffee plantations, as well as settlements. The species is endemic to the southern part of India and Sri Lanka, being found at altitudes between 0 and 2,000 m, where, locally it is a common species.

The fur has soft and thick hair and is grey-brown or black on the back. The head is grey or reddish brown. Characteristic are the three light-coloured stripes present on the back of the animals. On the underside, they are reddish or light brown. They are diurnal, all day long looking for food, both in the trees and on the ground. They are not scary, enduring human proximity and often settling in the outbuildings of houses. The food consists of seeds, nuts, stems and shoots, buds, leaves, flowers, insects and larvae. Reproduction takes place 3 times a year, the gestation lasting 40-45 days. The number of babies at birth is 2-4. Sexual maturity is reached at the age of 9 months, and longevity in captivity is about 5-6 years. 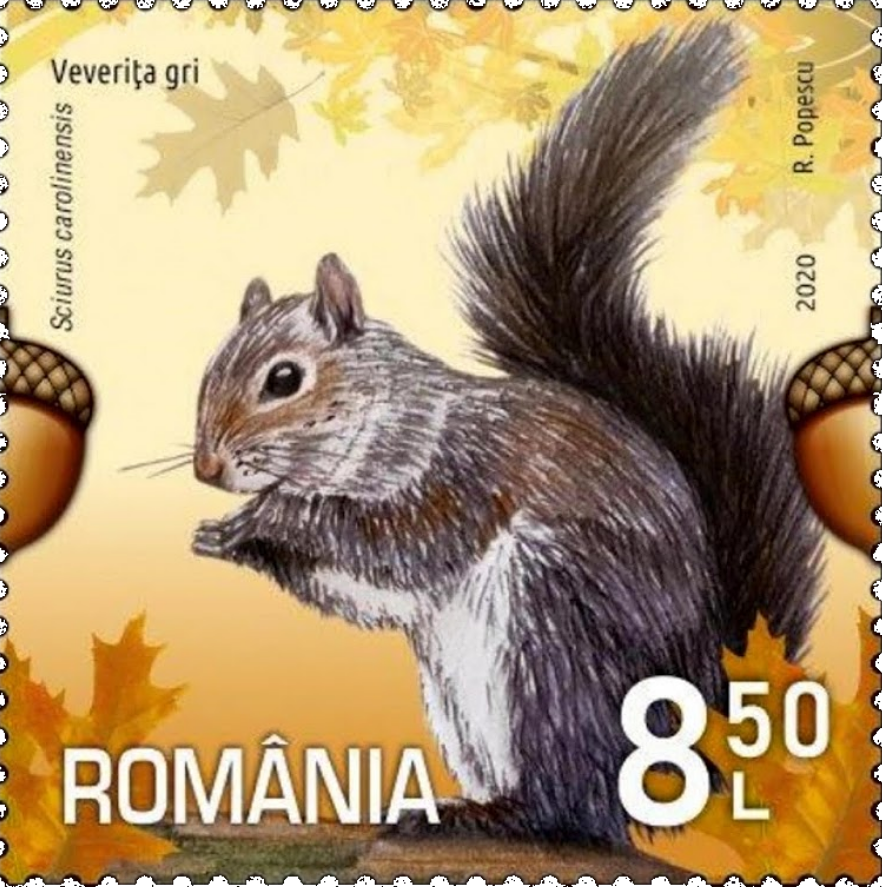 Squirrels, under normal conditions, do not cause damages, but in the absence of regular food sources can gnaw the bark of shrubs and eat freshly sprouted wheat threads. This is the case of the Gray Squirrel – Sciurus carolinensis Gmelin, 1788, rendered on the stamp with the face value of Lei 8.50. Moved from its native area, in the eastern United States and southern Canada, was deliberately introduced to the United Kingdom and South Africa, where it reproduced so much that it began to cause damage in cereal crops and fruit bush plantations. In its native area, the Gray Squirrel is widespread and abundant, being reported densities of up to 21 individuals/ha in urban parks, both the size of the population and the area increasing.

It prefers mature deciduous and mixed forests, their specific composition being decisive for the local size of the populations of Gray Squirrels, the densities being influenced by the number of trees that produce nuts and acorns. It is active during the day, mainly in the morning and late afternoon, sometimes having short periods of inactivity of one or two days in case of extreme weather conditions.

It builds its nest in trees, usually in their cavities, but it can also build nests from braided leaves and branches, lined with grasses and mosses. For sheltering the nest, dry hollows, with a diameter of up to 25 cm and a height of 40-50 cm are preferred.

The female sometimes moves her babies from one nest to another, supposedly to get rid of flea over-infestation. It also finds shelter in hollows, as well as in abandoned bird nests. It is not a territorial species, and the fact that it presents an irreversible dispersion, on a large scale in case of exceeding some population levels, gives the Gray Squirrel a high degree of invasion risk. In addition to this, it was found that following deliberate introductions to the United Kingdom, the Gray Squirrel led to the gradual replacement of native squirrels by transmitting diseases with devastating effects on the latter. Although it is prey for many species of predators, it seems that this aspect does not limit its dispersal. 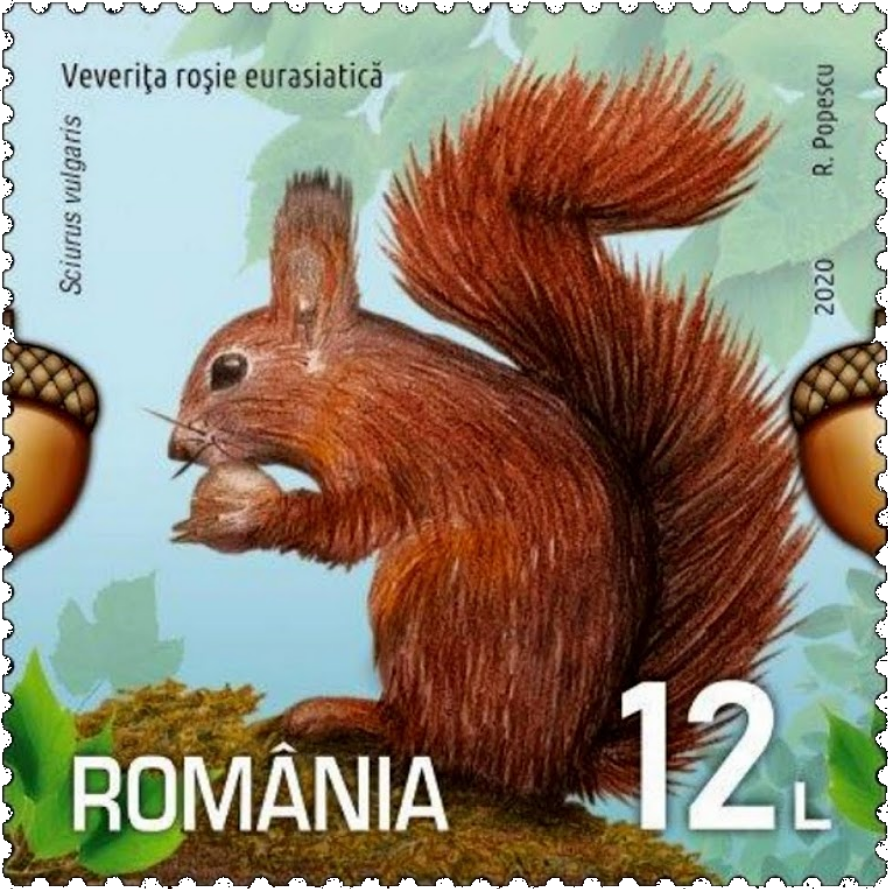 The Eurasian Red Squirrel – Sciurus vulgaris Linnaeus, 1758, illustrated on the stamp with the face value of Lei 12, is widespread throughout the forest area of the Palearctic region, from Ireland to Japan. In the south, it reaches the Mediterranean Sea, southern Ural Mountains, Altai, central Mongolia, Manchuria, Korea, and north-eastern China.

It prefers forests with tall and hollow trees, with dense branches that allow a good nesting location. It gets installed in the edges of woods if there are orchards with fruit trees in the vicinity, especially with walnuts. In Romania, it is found from the plain up to 1,500 m altitude. The nest is made of braided branches, lined with grass, moss, hair, feathers and is covered with a braid of twigs to protect it from rain.

It also finds shelter in hollows, as well as in abandoned bird nests. It does not hibernate. In the crowns of trees, it moves by jumps, the tail helping it to maintain balance. It descends agilely on the trunks of the trees, upside down. It moves easily on the ground. It is solitary, but in the cold period of the year, they gather in groups of 4-6 individuals. It consumes different vegetables, depending on the season, pine seeds and other conifer seeds, then mushrooms and insects, bird eggs and hatch and occasionally small rodents. Surplus food is stored individually in rock crevices and hollows. The mushrooms are deposited at the bifurcation of branches. Reproduction begins in the first months of the year. Gestation lasts 38-40 days after which 2-7 bald youngsters are born, with the eyes closed for the first 3 weeks of life. Breastfeeding lasts 6-8 weeks and sexual maturity is reached at the age of one year. The maximum longevity is 10 years.

Romfilatelia thanks the “Grigore Antipa” National Museum of Natural History from Bucharest for the documentary support granted to the achievement of this postage stamps. 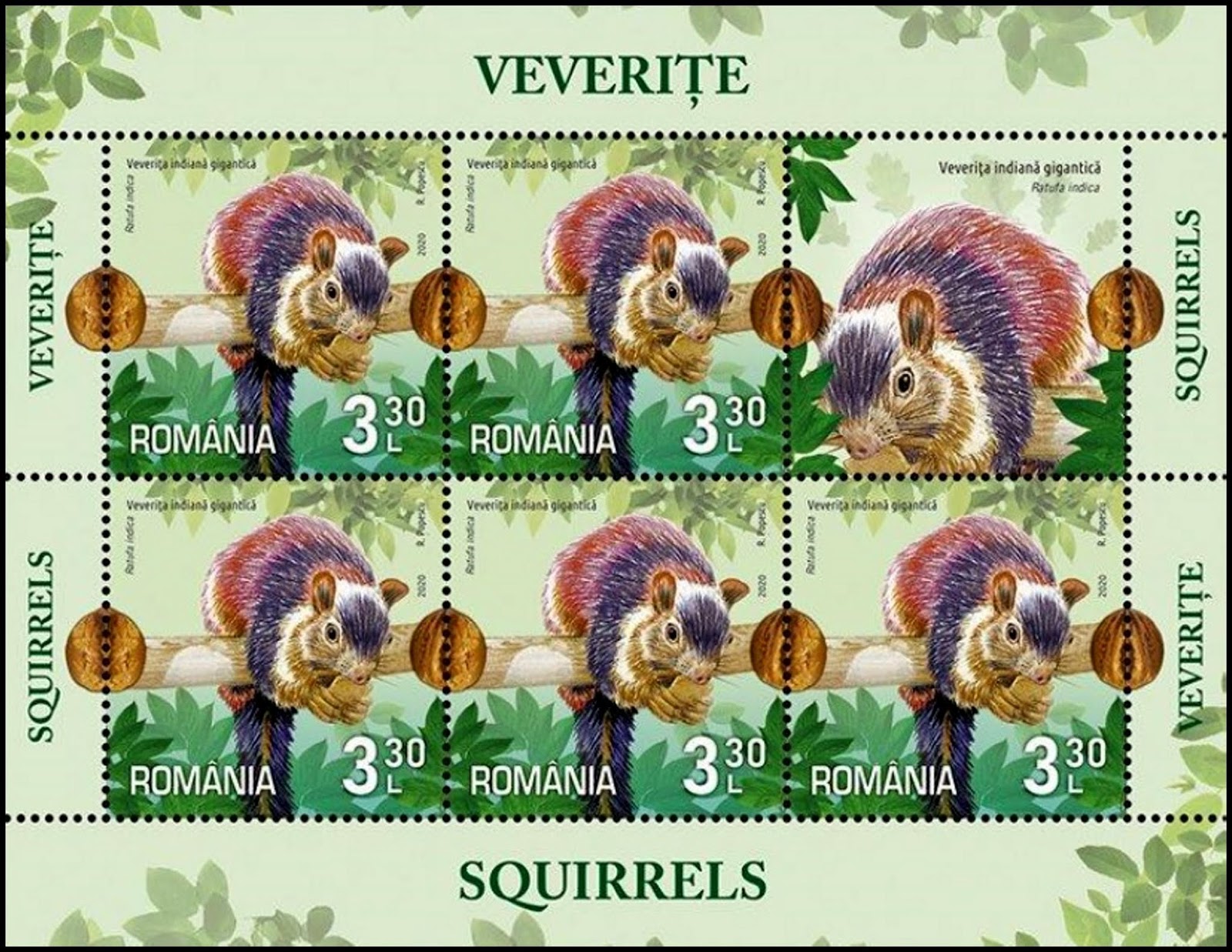 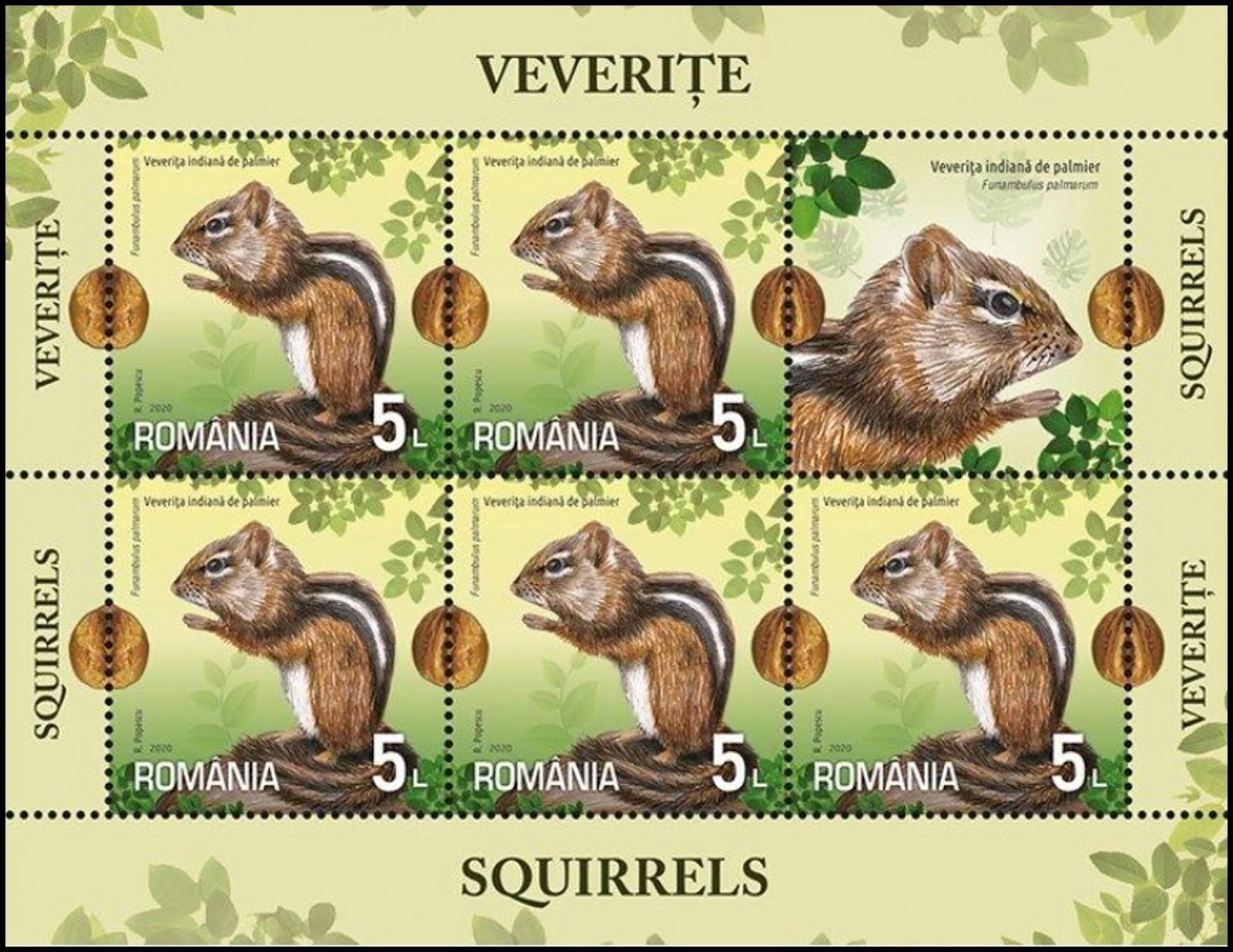 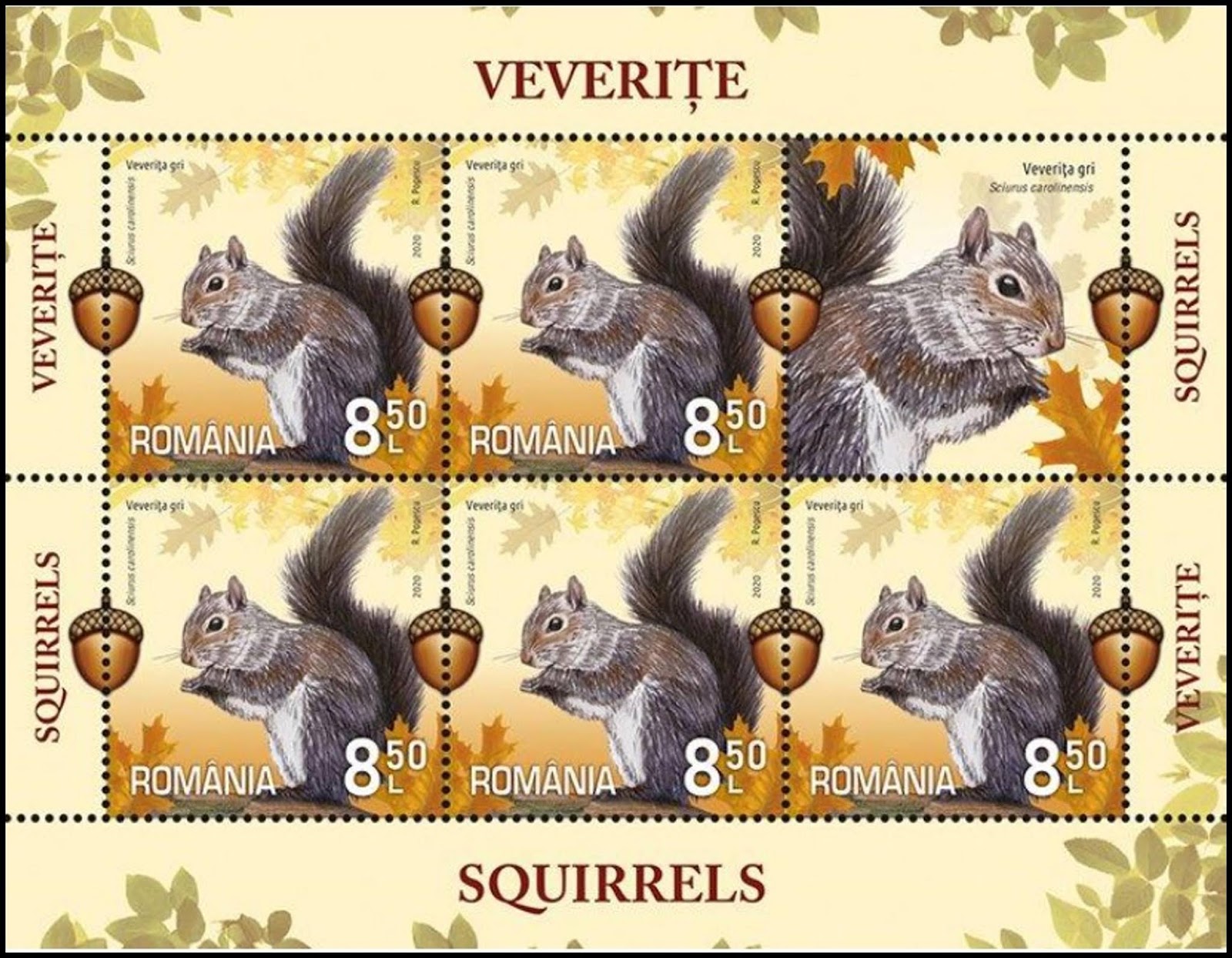 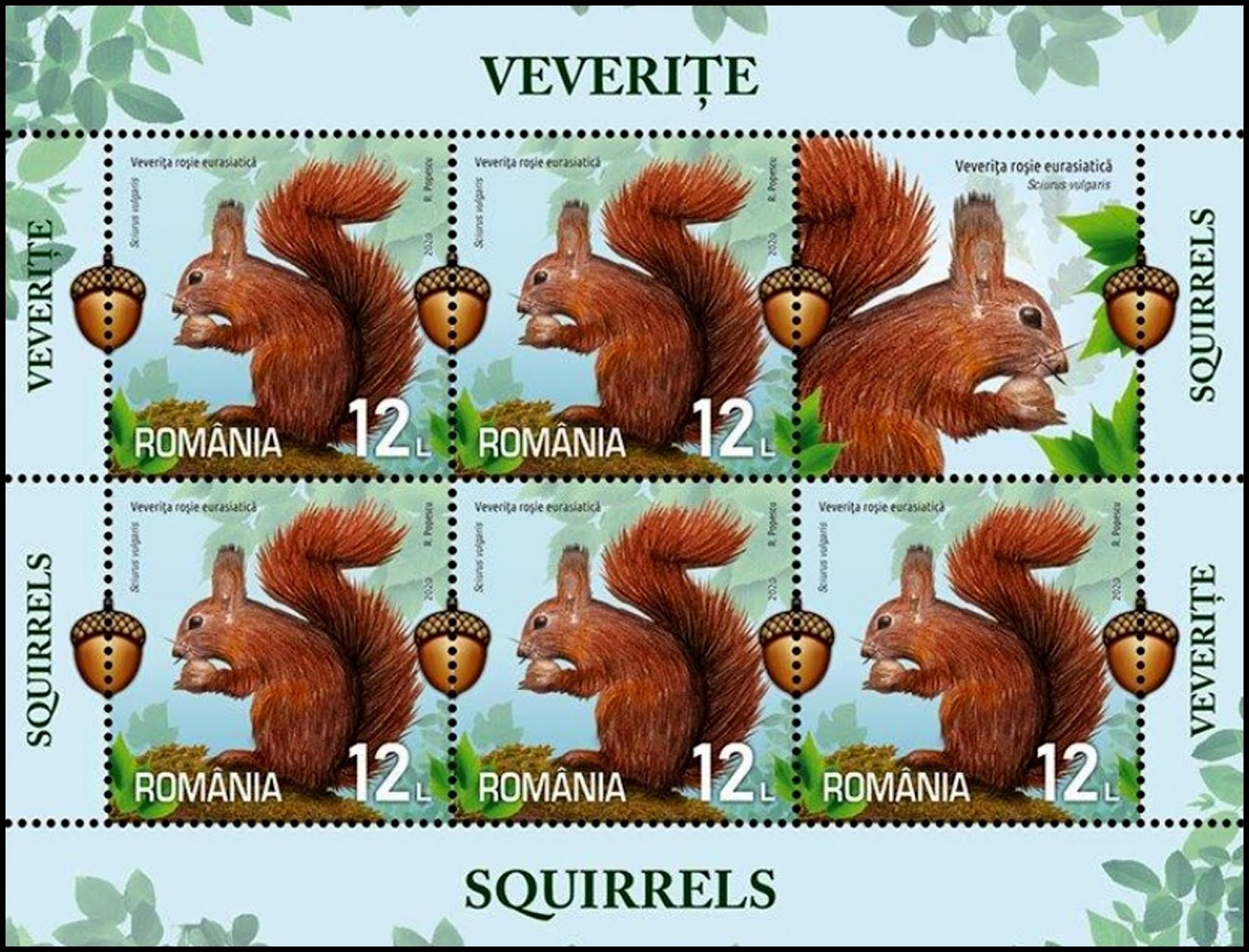 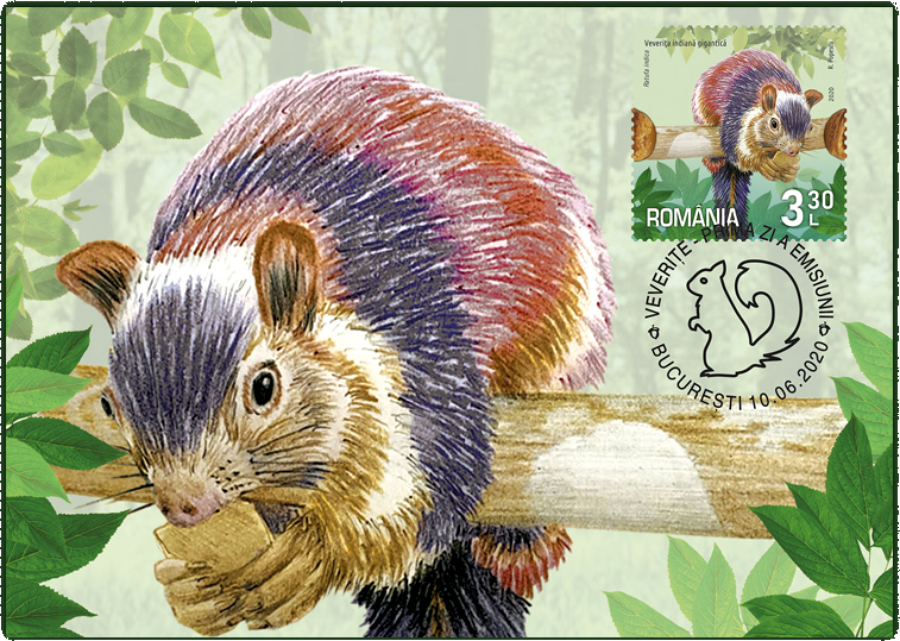 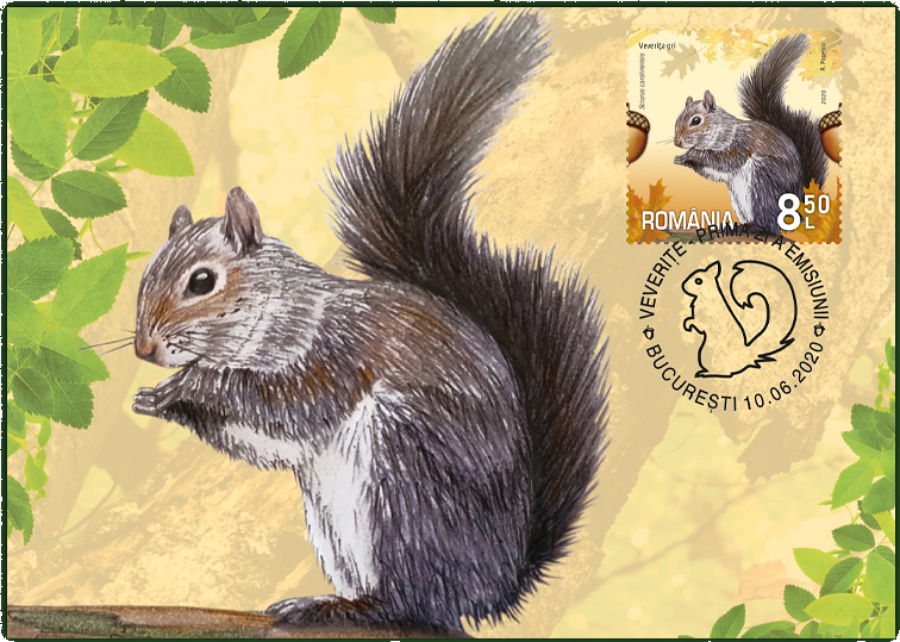 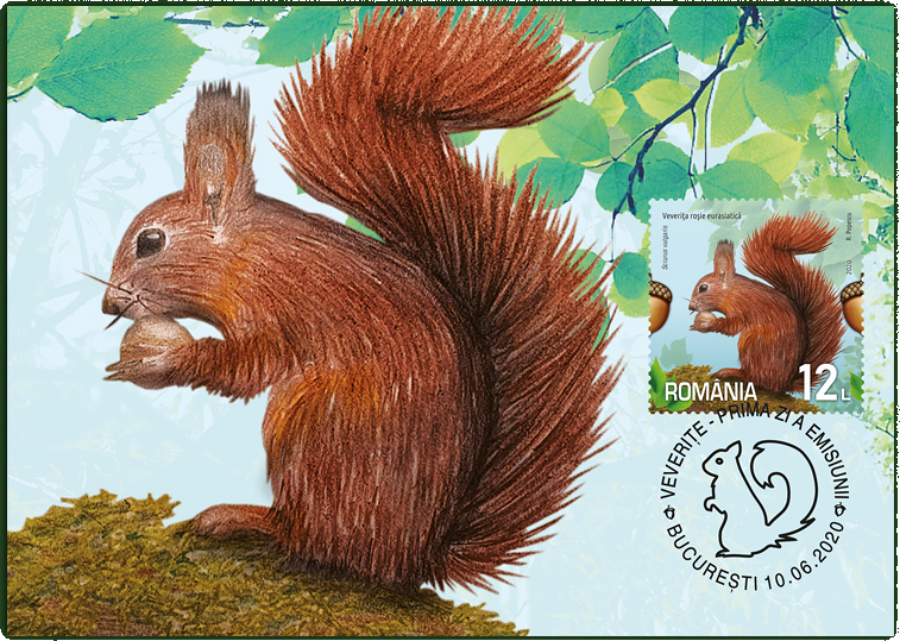 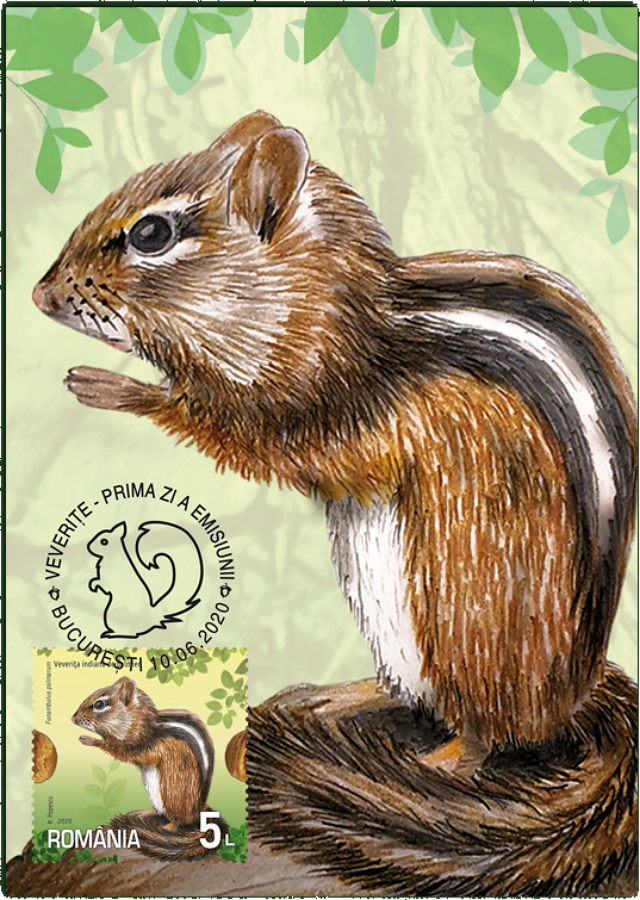