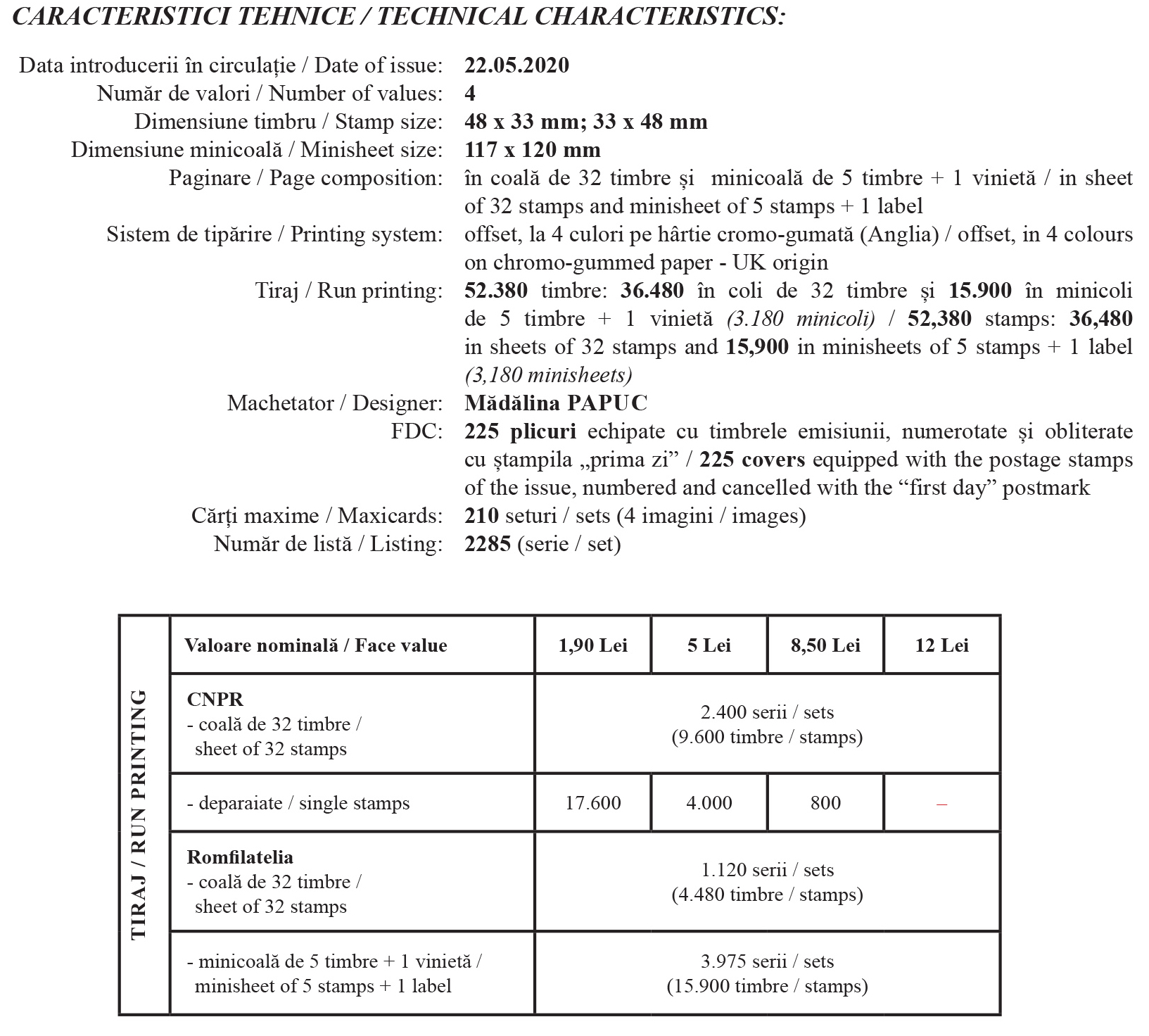 Romfilatelia continues its series of projects dedicated to Fauna, one of the most appreciated topic by the collectors, through Pheasants postage stamps issue, which will enter into circulation on Friday, May 22nd, 2020. The issue is a philatelic premiere because all the four stamps of the series are dedicated exclusively to the pheasants.

Pheasants are part of the Phasianidae family, along with quails, partridges and other related species forming a very large family, with over 200 species spread in the tropical and temperate regions of the globe. The main centre of dispersal of the family is Asia. 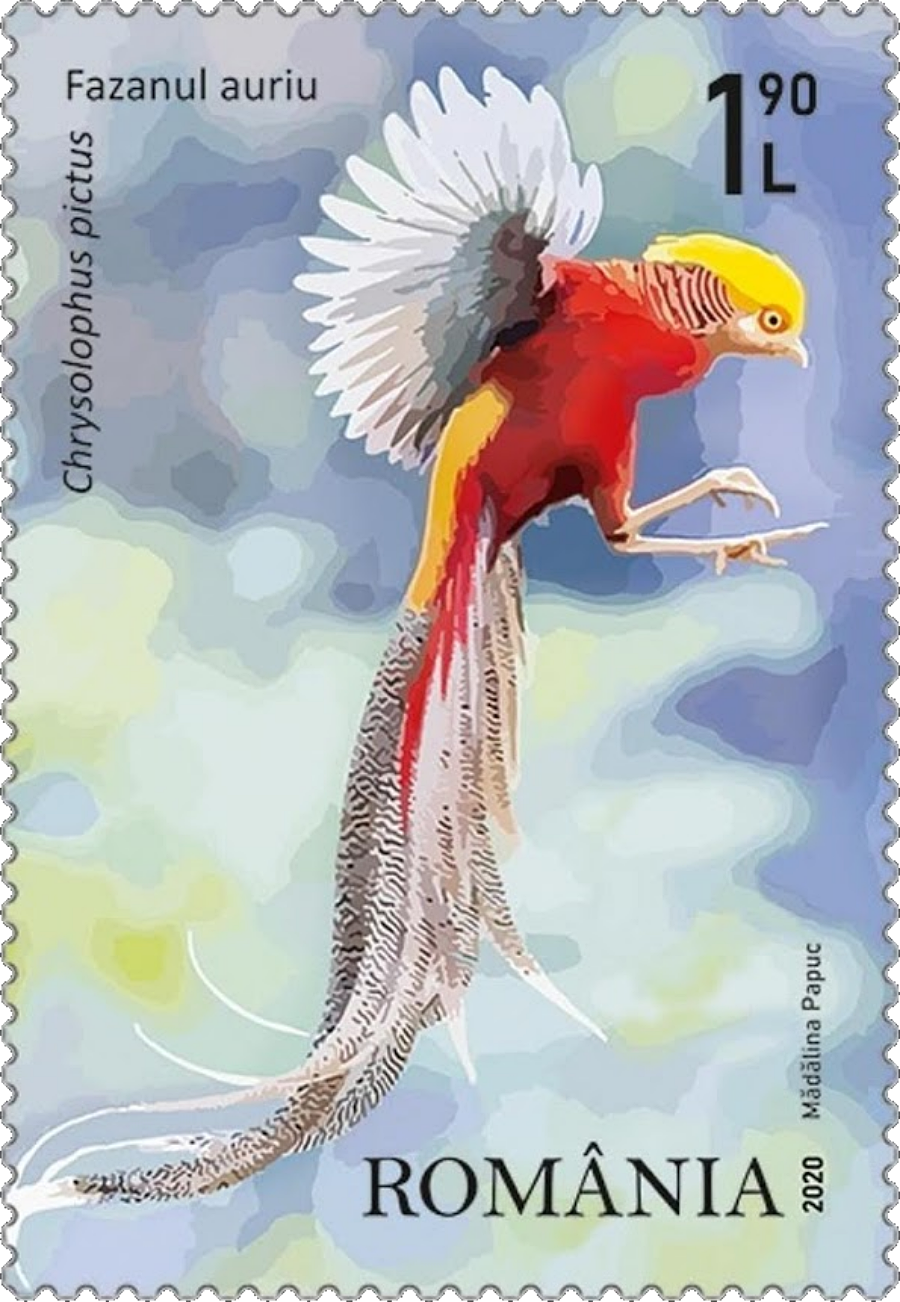 Golden Pheasant, or “Chinese Pheasant” – Chrysolophus pictus (Linnaeus, 1758), rendered on the stamp with the face value of Lei 1.90, is native to Asia, Mongolia and central China, where it lives in forested areas. As an ornamental species, it was introduced to Europe in the fifteenth century mainly due to the plumage of males, which is particularly beautiful. The most beautiful adornment are the golden crown, which covers the top, an impressive collar, which the owner can fluff during the wedding dance ceremonial to impress the female, and a tail almost one meter long. Georges Cuvier (1769-1832) shows that the description of the Phoenix bird we find in Pliny the Elder (23-79) is probably that of the Golden Pheasant. In the past centuries, it was highly sought after for collections in Europe. Nowadays, it is bred in captivity, where it seems to have adapted very well. In pheasant nurseries, two varieties of colour are more common, golden against red background and golden against yellow background. Young females lay up to 12 eggs in a clutch, and adult females can be stimulated to lay up to 40 eggs, which can be artificially incubated. Incubation lasts 21 days.

In the wild, it prefers young bamboo forests. They feed on various species of plants, including the flowers of several species of rhododendron, insects, spiders, other small invertebrates; they are generally omnivorous. 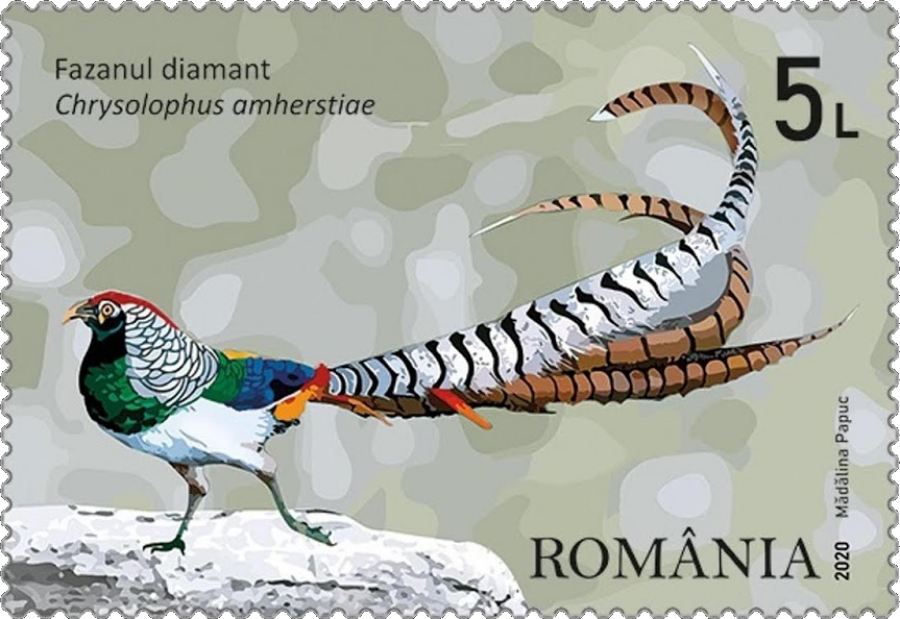 Lady Amherst’s Pheasant – Chrysolophus amherstiae (Leadbeater, 1829), illustrated on the stamp with the face value of Lei 5, lives in the highlands of Asia, southwestern China and Myanmar, where it inhabits mountain slopes at altitudes between 2,000 m and 3,500 m, reaching some high areas of Tibet and up to 6,000 m altitude. The preferred biotope is bamboo thickets and forests.

The plumage of the male is particularly beautiful. It has a white collar around the neck and a very long tail, whose ornamental feathers can reach up to a metre. The female lays up to 12 eggs, which it hatches for 22-23 days. These birds feed on plants but also on small invertebrates. The name of the species was given in honour of the Countess of Amherst, the wife of the Governor of Bengal, William Pitt Amherst, who in 1828 sent to London the first living specimen of this species.

On the International Red List (IUCN), this species has a stable population, and is classified in the category of low concern (LC). 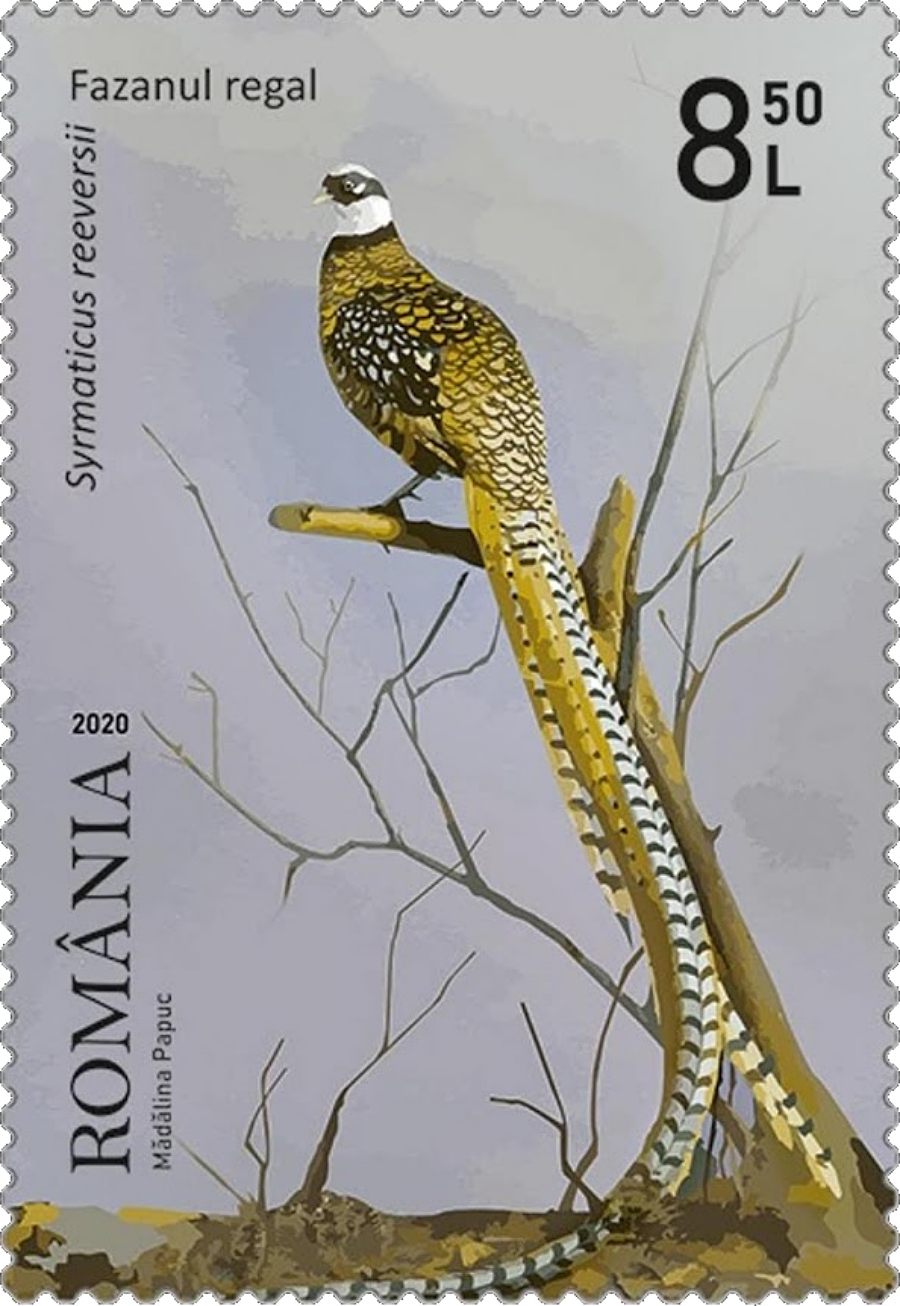 The plumage is bright, golden-scaled in the male, whose tail is coloured in shades of yellow with white and black and can reach 2 m in length. The sexual dimorphism is very pronounced, the female being yellowish. The Reeves’s Pheasants are aggressive towards humans, animals and even other pheasant species. They are heat and cold resistant birds. Their diet is varied, consuming seeds of wild and cultivated plants. Sometimes, they supplement their diet with insects, larvae and other small terrestrial animals. They are very well bred in captivity. The female lays 7-14 eggs in April, their incubation lasting 24-25 days. The name of this species was given in honour of the English naturalist John Reeves, who in 1831 brought the first living specimens of this species to Europe.

Because of the habitat loss, massive deforestation, hunting for food and tail feathers, this pheasant is assessed as vulnerable on the IUCN Red List of Threatened Species. 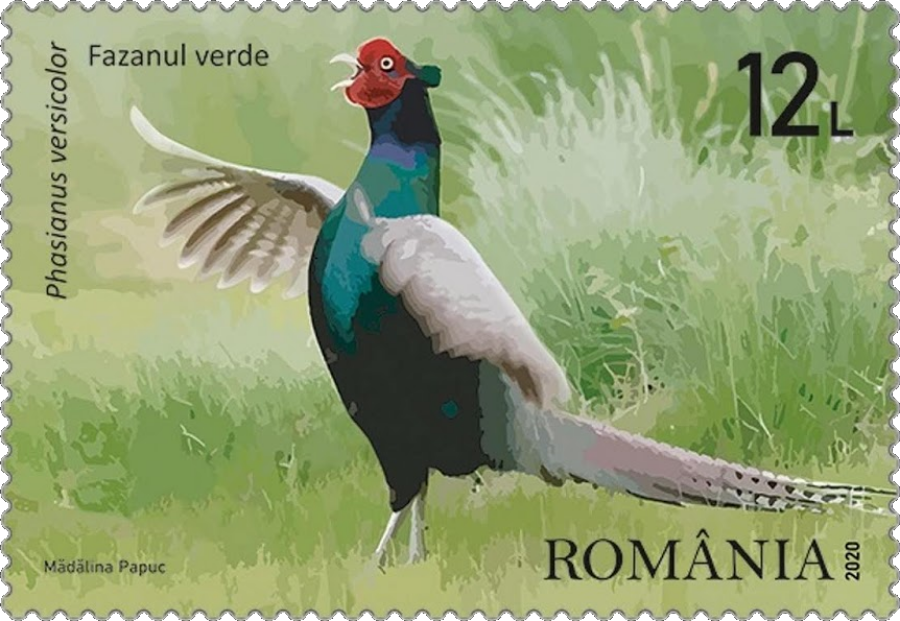 Green Pheasant, or Japanese Pheasant – Phasianus versicolor Vieillot, 1825, represented on the stamp with the face value of Lei 12 is, according to some sources, a subspecies of the common pheasant, while others separate it as a distinct species. The male has a characteristic dark green plumage, while the female is smaller and less intensely coloured.

It is widespread in several islands in the Japanese archipelago such as Honshu, Shikoku, and Kyushu and several other smaller islands and has been introduced as a species of hunting interest in Hawaii and North America. It populates forested areas, forest edges, areas with bushes and even pastures and anthropic areas. In its native habitat, it is a common, widespread species. The populations introduced to Western Europe have intensely hybridized with those of the common pheasant so that the original green colour no longer exists in this area.

Common Pheasant, or Ring-Necked Pheasant – Phasianus colchicus (Linnaeus, 1758), illustrated on the First Day Cover of the issue is the typical pheasant, the best known and most widespread nowadays, which Linnaeus, the father of modern systematics, called Phasianus colchicus, the Colchida pheasant. The legend says that a long time ago, a few birds, which currently belong to the western population, without a white collar, were brought to Greece by the Argonauts. The name pheasant derives from the Latin word Phasianus and comes from the Greek name Phasiornis: the bird of Phasis, the name of a river in the ancient province of Colchis, east of the Black Sea (in the Crimea), where, perhaps, the Greek Argonauts discovered this bird. The current distribution does not invalidate this hypothesis at all. It is supposed that the Romans introduced it to England. Before man changed its area of spread, its habitat extended from Asia Minor to East China and Korea. To the United States, it was introduced before 1790. A batch of the same species, but with a white neck, from China and Mongolia, was introduced around 1857. It was successfully introduced to New Zealand, Hawaii, Samoa, etc., as well as in Romania, where it is much appreciated by hunters.

It has a strong sexual dimorphism and is a polygamous species. The female hatches on grassy soil for 24 days in the months of April-June. The clutch contains 9-15 eggs. During the day, it searches for food in the fields through sowing, and at night it withdraws into the forest, sleeping in the trees. Up to date, about 34 subspecies are known, as well as many varieties bred in captivity.

Romfilatelia thanks the “Grigore Antipa” National Museum of Natural History from Bucharest for the documentary support granted to the achievement of this postage stamps issue. 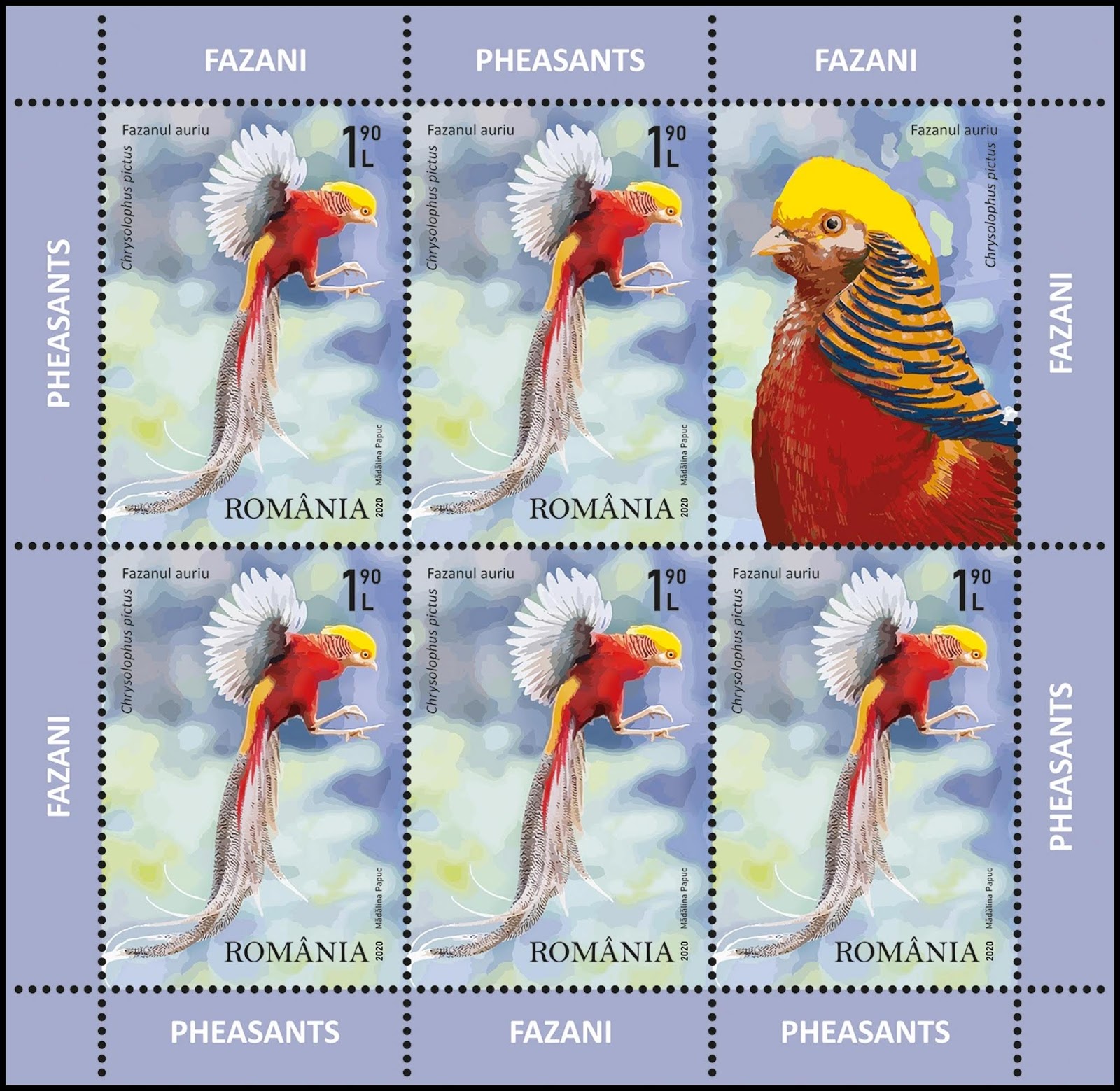 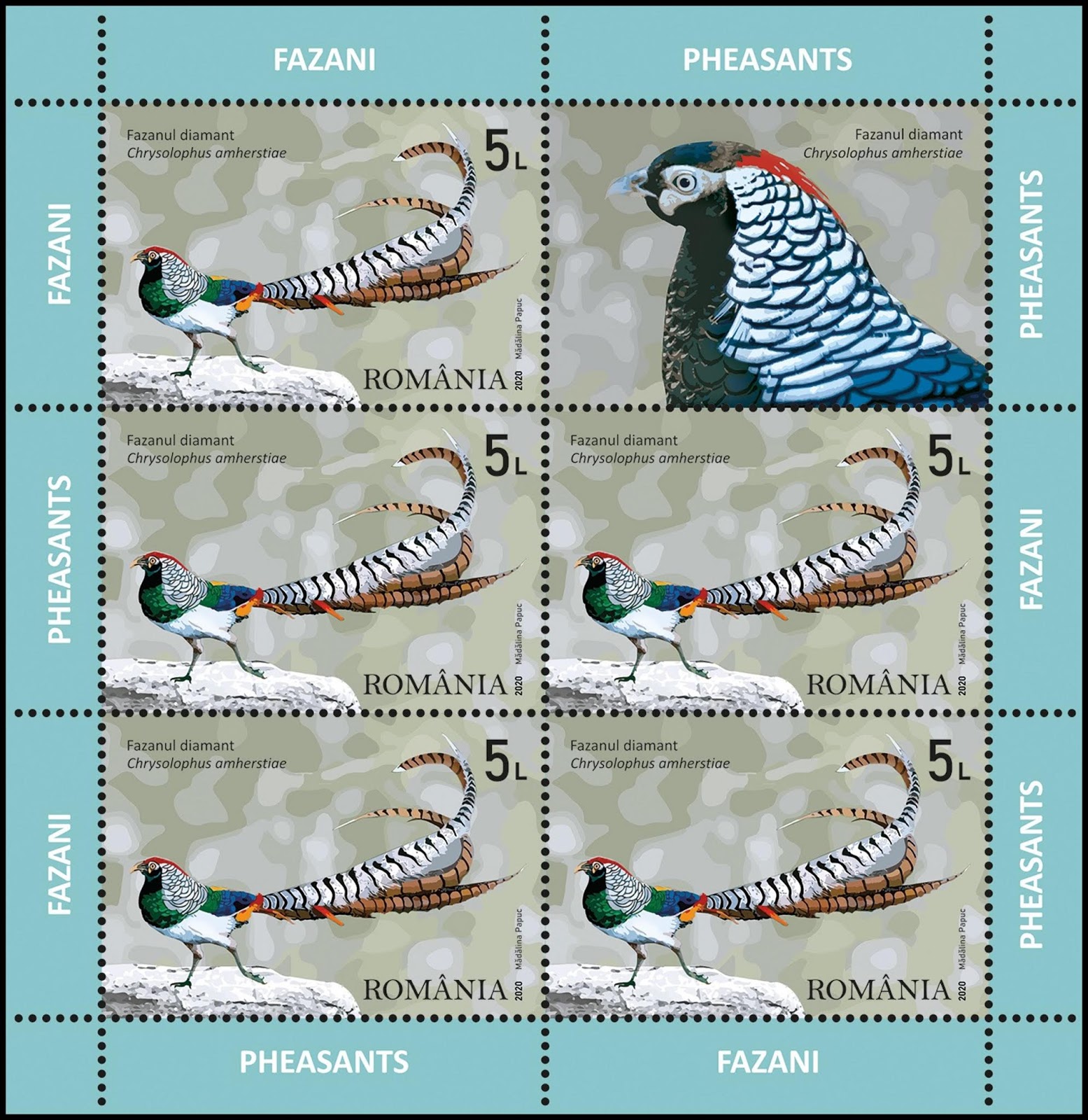 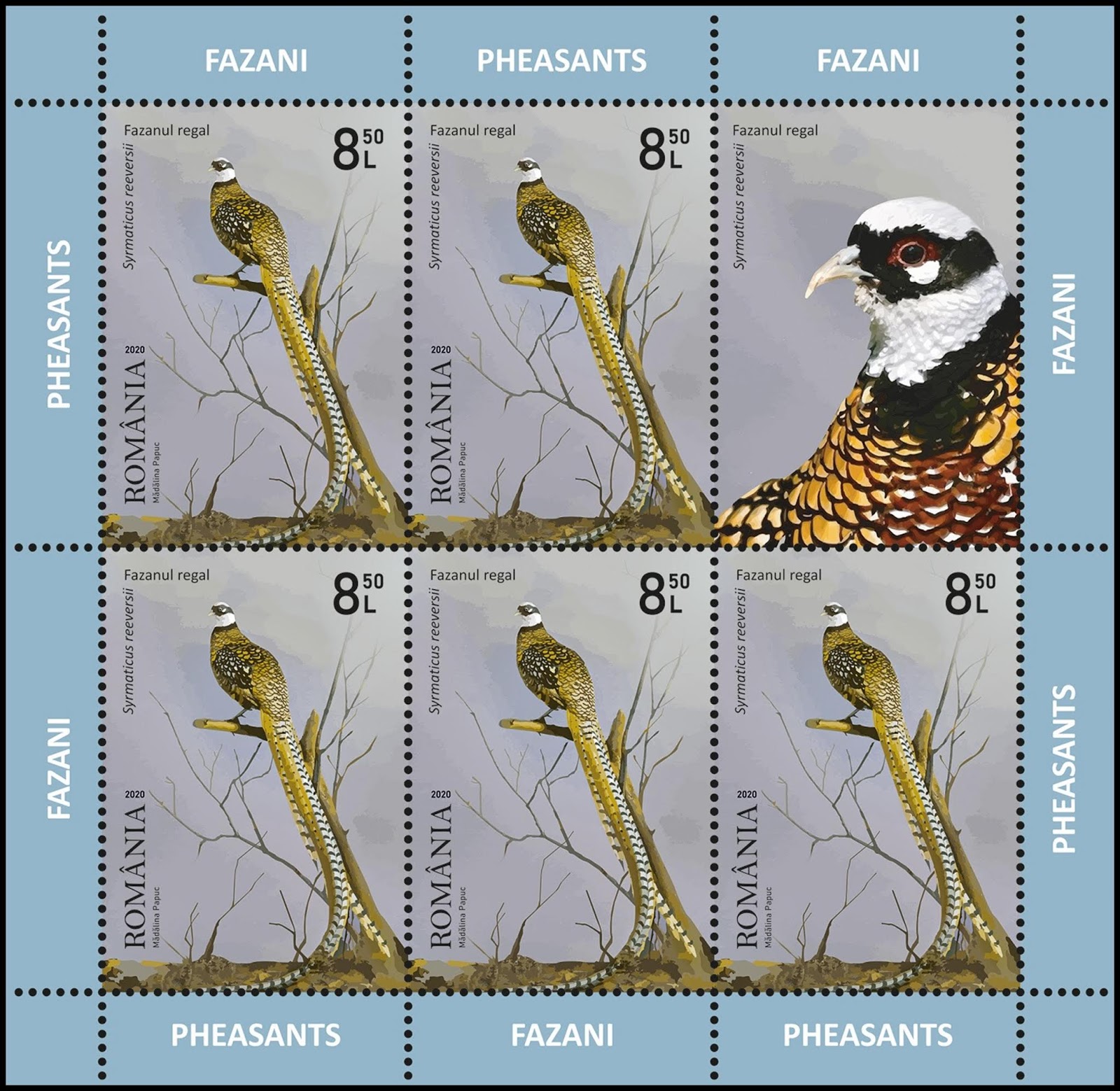 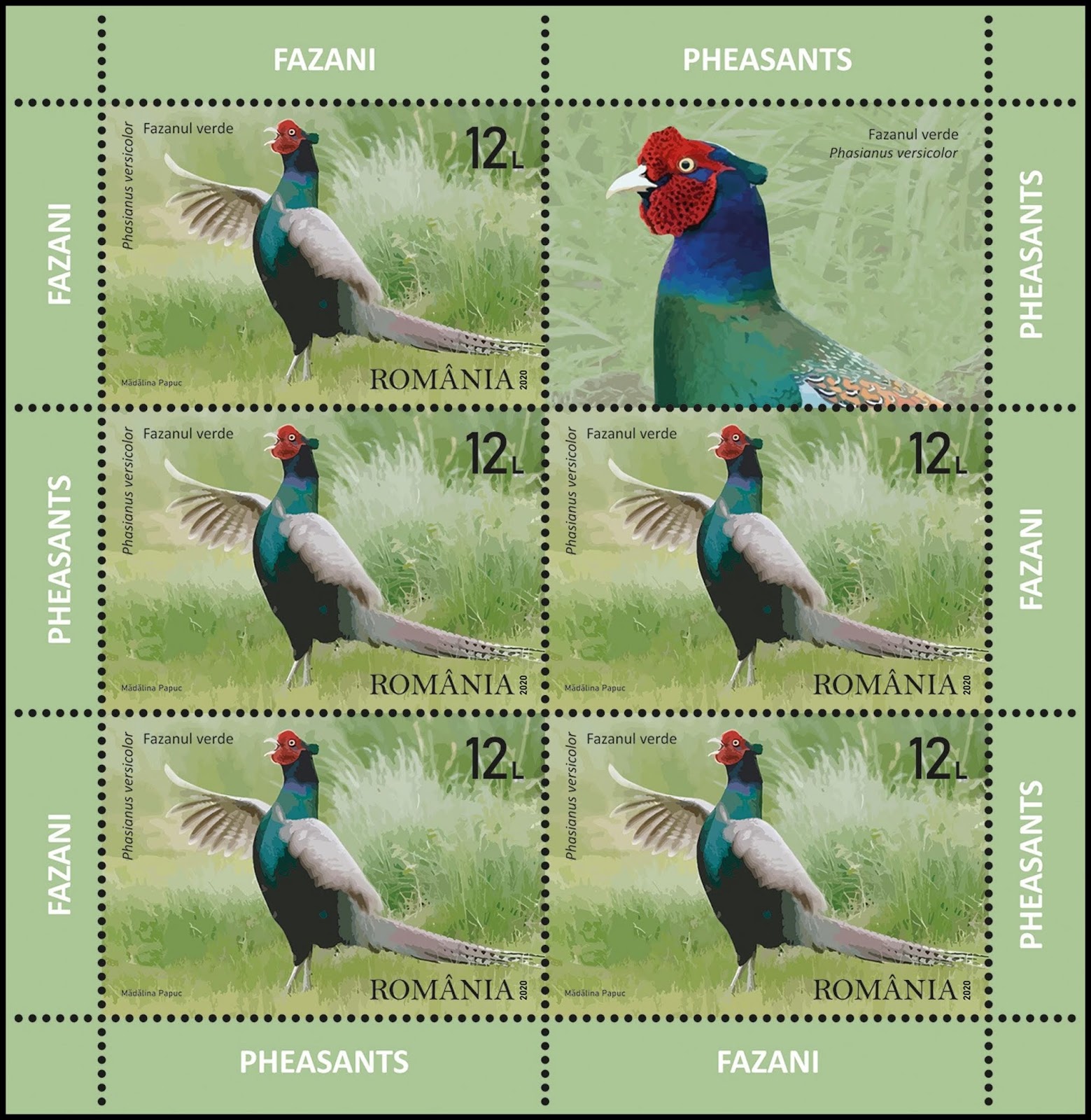 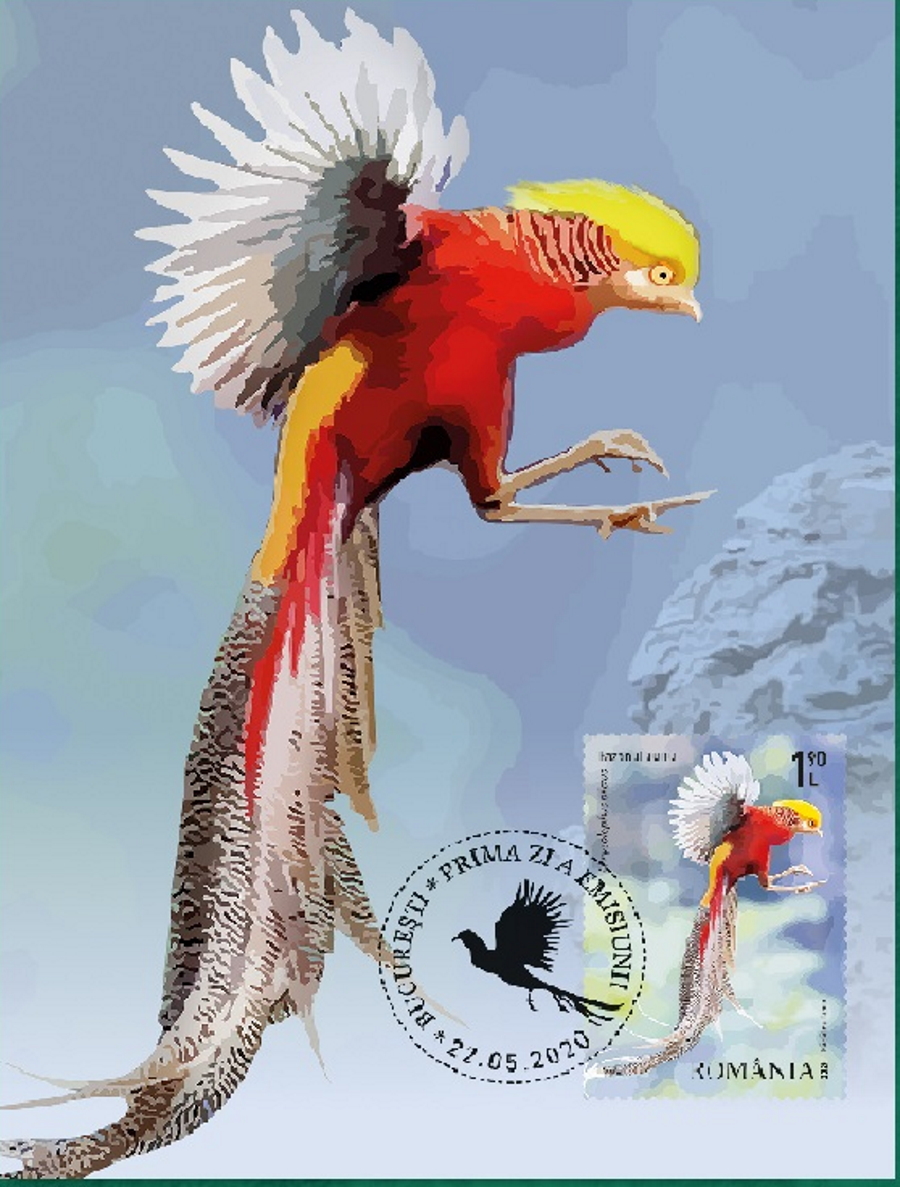 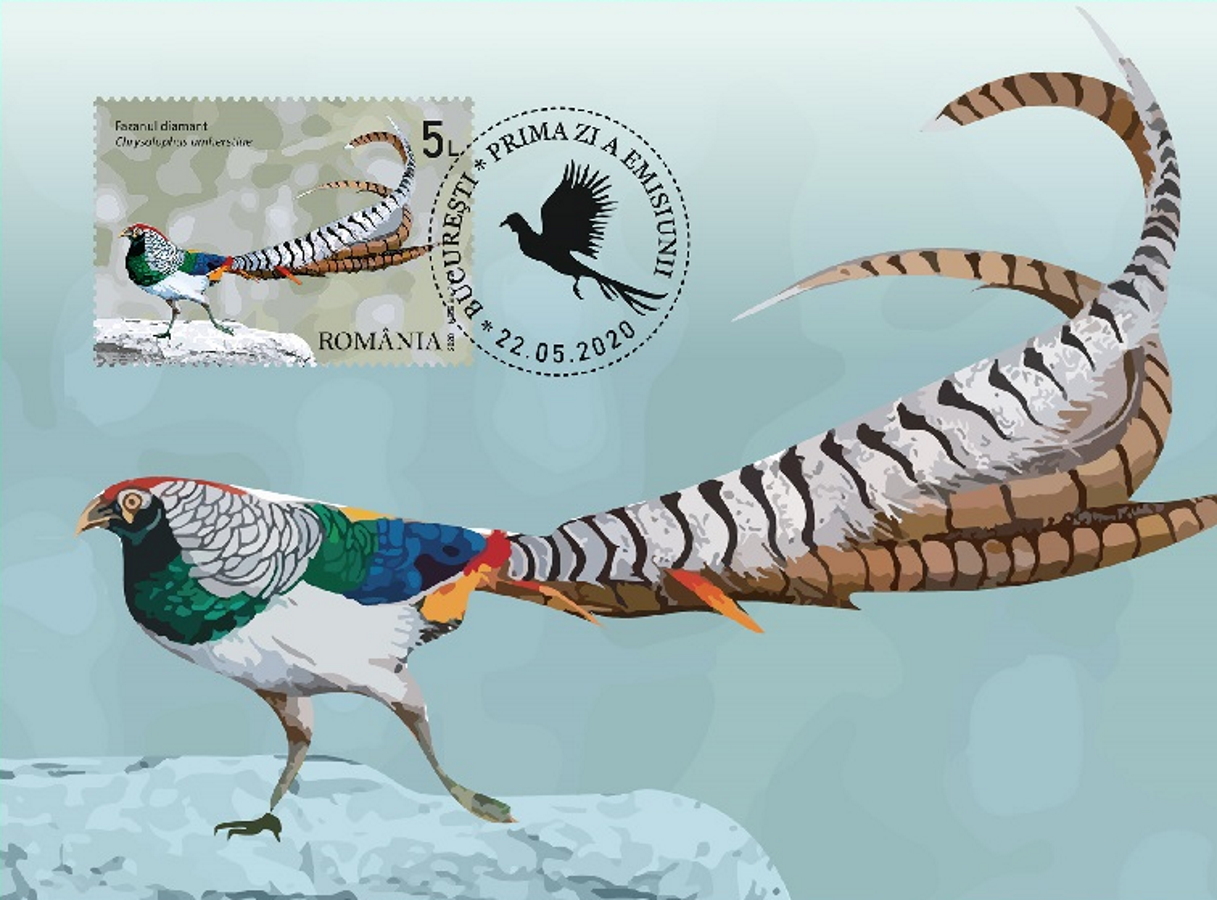 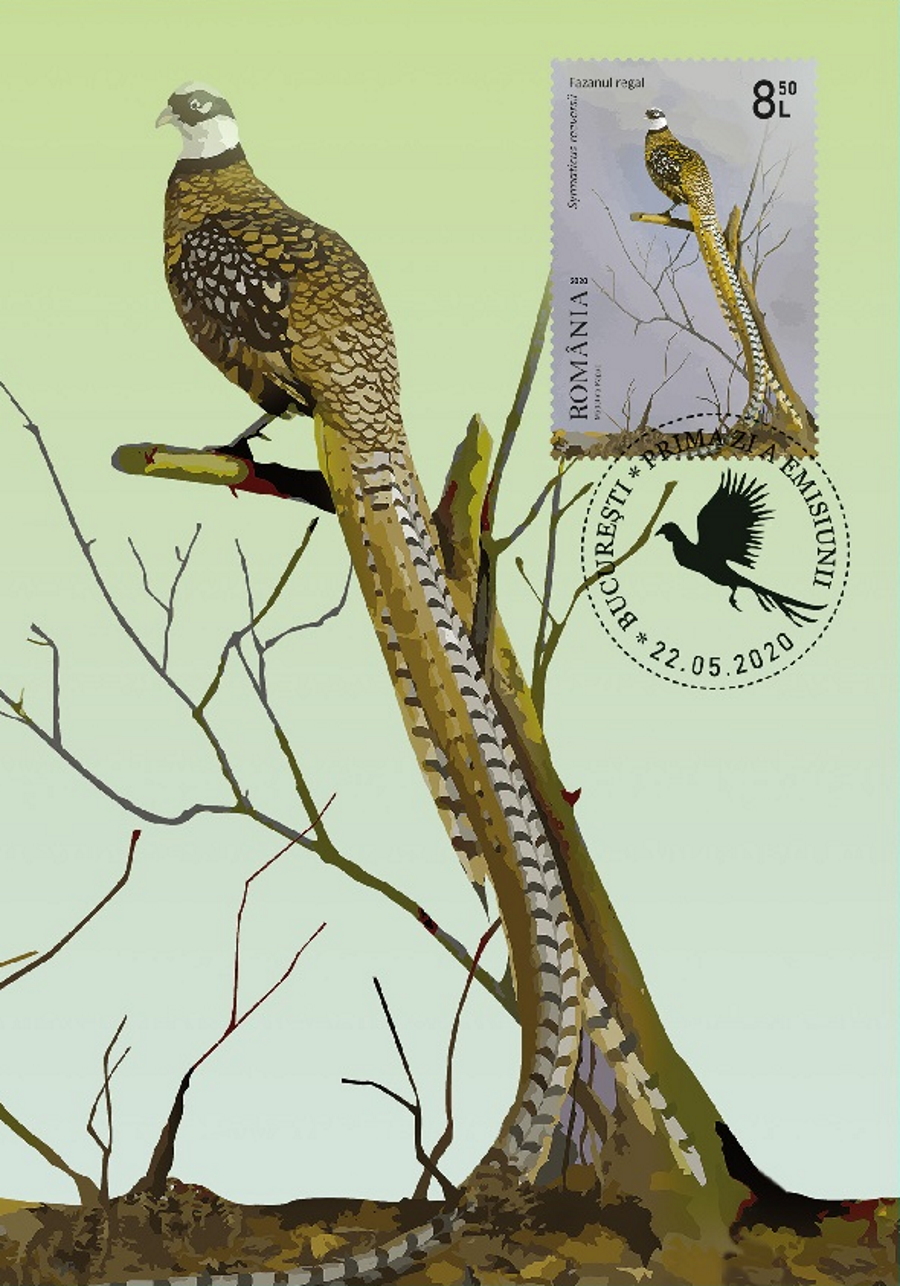 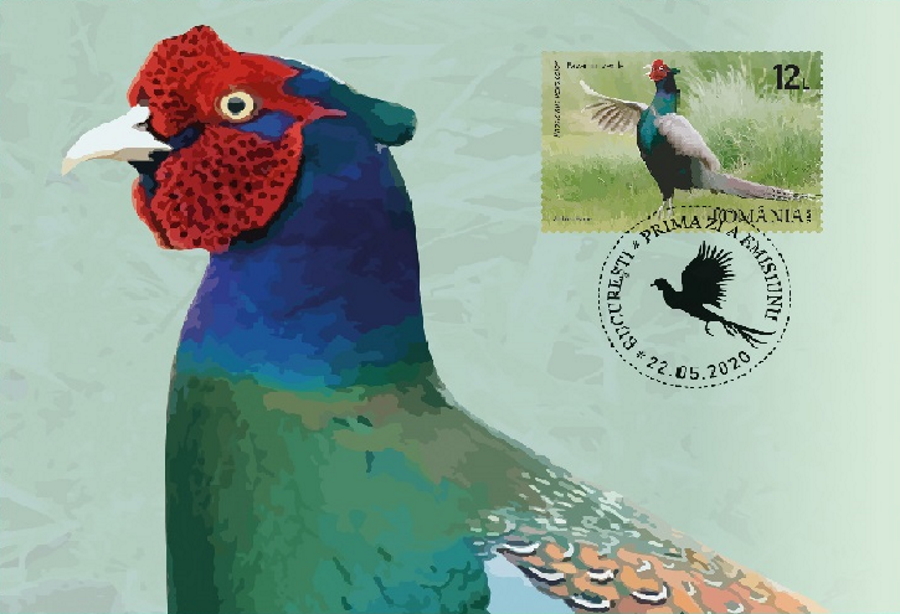