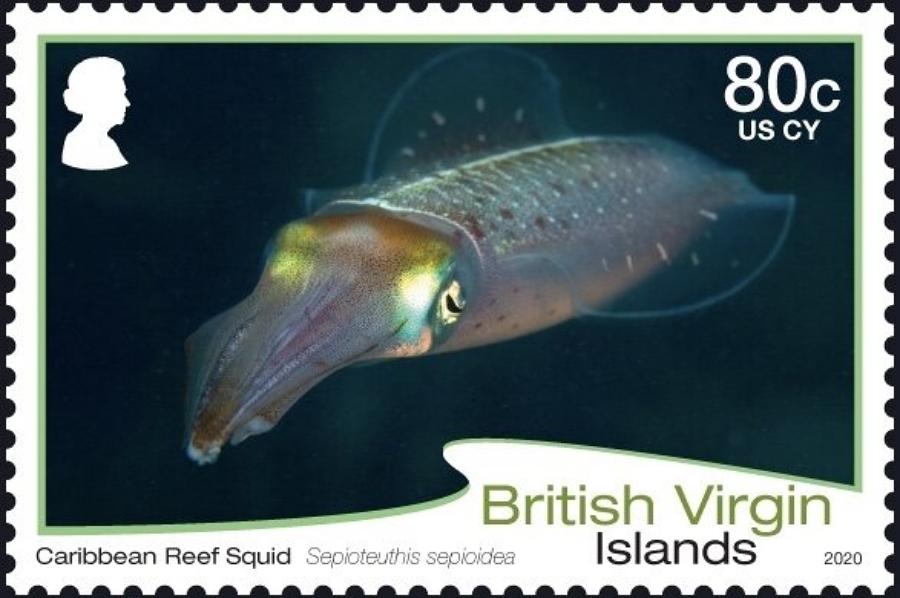 The Caribbean reef squid (Sepioteuthis sepioidea), commonly called the reef squid, is a species of small, torpedo-shaped squid with undulating fins that extend nearly the entire length of the body, approximately 20 cm (8 in) in length. In 2001, marine biologist Silvia Maciá discovered that squid were able to propel themselves up out of the water about 2 m (6.6 ft) and fly approximately 10 m (33 ft) before re-entry; a discovery which led to the identification of six species of flying squid.

The Caribbean reef squid is found throughout the Caribbean Sea as well as off the coast of Florida, commonly in small schools of four to thirty in the shallows associated with reefs. The habitat of the Reef Squid changes according to the squid’s stage of life and size. New hatchlings tend to reside close to the shore in areas from 0.2 to 1 metre (1 to 3 ft) below the surface on or under vegetation. Young small squid typically congregate in shallow turtle grass near islands and remain several centimeters to two meters from the surface to avoid bird predators. Adults venture out into open water and can be found in depths up to 150 m. When mating, adults are found near coral reefs in depths of 1.5 to 8 metres (5 to 26 ft). The Caribbean reef squid is the only squid species commonly sighted by divers over inshore reefs in the Florida, Bahamas and Caribbean regions.

This species, like most squid, is a voracious eater and typically consumes 30–60% of its body weight daily. Prey is caught using the club-like end of the long tentacles which are then pulled towards the mouth supported by the shorter arms. Like other cephalopods, it has a strong beak which it uses to cut the prey into parts so that the raspy tongue, or radula, can be used to further process the food. It consumes small fish, other molluscs, and crustaceans.

Caribbean reef squid have been shown to communicate using a variety of color, shape, and texture changes. Squid are capable of rapid changes in skin color and pattern through nervous control of chromatophores. In addition to camouflage and appearing larger in the face of a threat, squids use color, patterns, and flashing to communicate with one another in various courtship rituals. Caribbean reef squid can send one message via color patterns to a squid on their right, while they send another message to a squid on their left.

Like other cephalopods, the Caribbean reef squid, is semelparous, dying after reproducing. Females lay their eggs then die immediately after. The males, however, can fertilize many females in a short period of time before they die. Females lay the eggs in well-protected areas scattered around the reefs. After competing with 2-5 other males, the largest male approaches the female and gently strokes her with his tentacles. At first she may indicate her alarm by flashing a distinct pattern, but the male soon calms her by blowing water at her and jetting gently away. He returns repeatedly until the female accepts him, however the pair may continue this dance or courting for up to an hour. The male then attaches a sticky packet of sperm to the female’s body. As he reaches out with the sperm packet, he displays a pulsating pattern. The female places the packet in her seminal receptacle, finds appropriate places to lay her eggs in small clusters, and then dies. 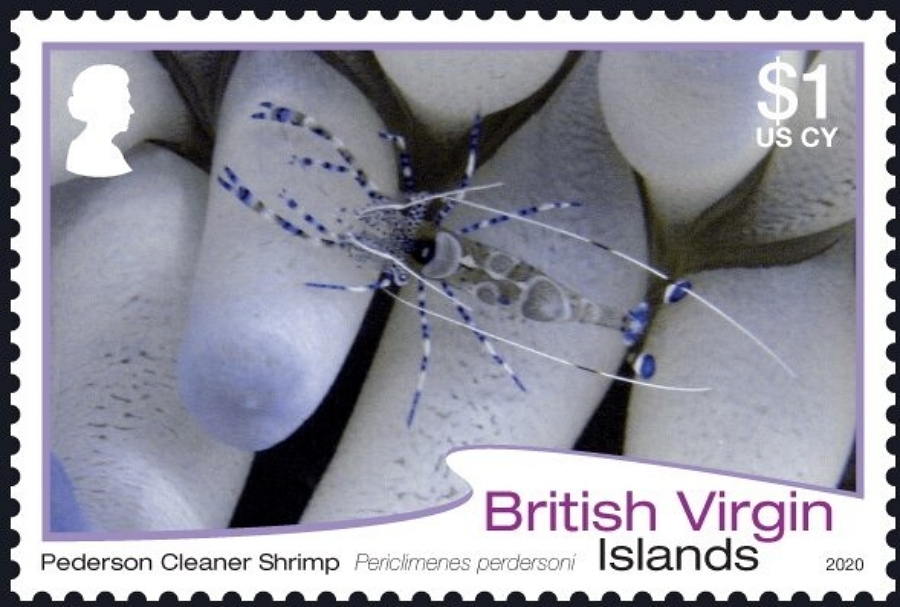 Ancylomenes pedersoni, sometimes known as Pederson’s shrimp, is a species of cleaner shrimp. It is part of the genus Ancylomenes and was described in 1958 by Fenner A. Chace Jr. as Periclimenes pedersoni. Ancylomenes pedersoni is found in the Caribbean Sea, often associated with a sea anemone, at depths of 1 to 15 metres (3 to 49 ft). They are often found on the reefs off Bermuda.

Pederson’s shrimp is a small transparent shrimp with bluish and violet markings on the body and long white antennae and within its range is unlikely to be confused with other species.

Pederson’s shrimp lives in association with a sea anemone, either Bartholomea annulata or Condylactis gigantea, living among the tentacles with impunity. Before it can do this it needs to acclimatize itself to the anemone by progressively pressing its body and appendages against the tentacles for increasing periods of time. After this it is able to move between the tentacles without getting stung but if it is separated from its host for a few days, it will need to repeat the immunizing procedure. Up to 26 shrimps have been found associated with one sea anemone but usually there are just one or two. The shrimp offers cleaning services to passing fish and attracts their attention by lashing its antennae about. Fish visiting the cleaning station will remain stationary while their external parasites are removed and eaten by the shrimp, which even cleans inside the gill covers and the mouth. If a neon goby sets up a cleaning station nearby, the shrimp will clean the client fish at the same time as the goby does. Researchers have shown that fish recognize the sea anemone Bartholomea annulata as being a place at which the shrimps’ services are likely to be available. The larger the sea anemone, the more likely fish are to visit it