Theme : For the first time in history, the Summer Olympics will be postponed to the summer of 2021. The stamp issue aims to highlight the continued commitment of our Belgian athletes in their pursuit of constant self-improvement.
Stamp : The stamp shows silhouettes of runners in the Belgian colours that give the impression of walking to the future. In addition, the logo of team Belgium and a Japanese Shintopoort are displayed. Sheet: Repetition of the runners on the stamp, in the Belgian colours.
Creation : Kris Maes
Stamp size : 60mm x 30mm
Size of the leaf : 200mm x 165mm
Classification of the leaf : 5 stamps
Value : 1 destination World
For : normalised consignments up to 50g
Paper : gumped white FSC
Tanding : 11 1/2
Printing process : Offset
Issue date : 15 June 2020
Repro and print : bpost Philately & Stamps Printing 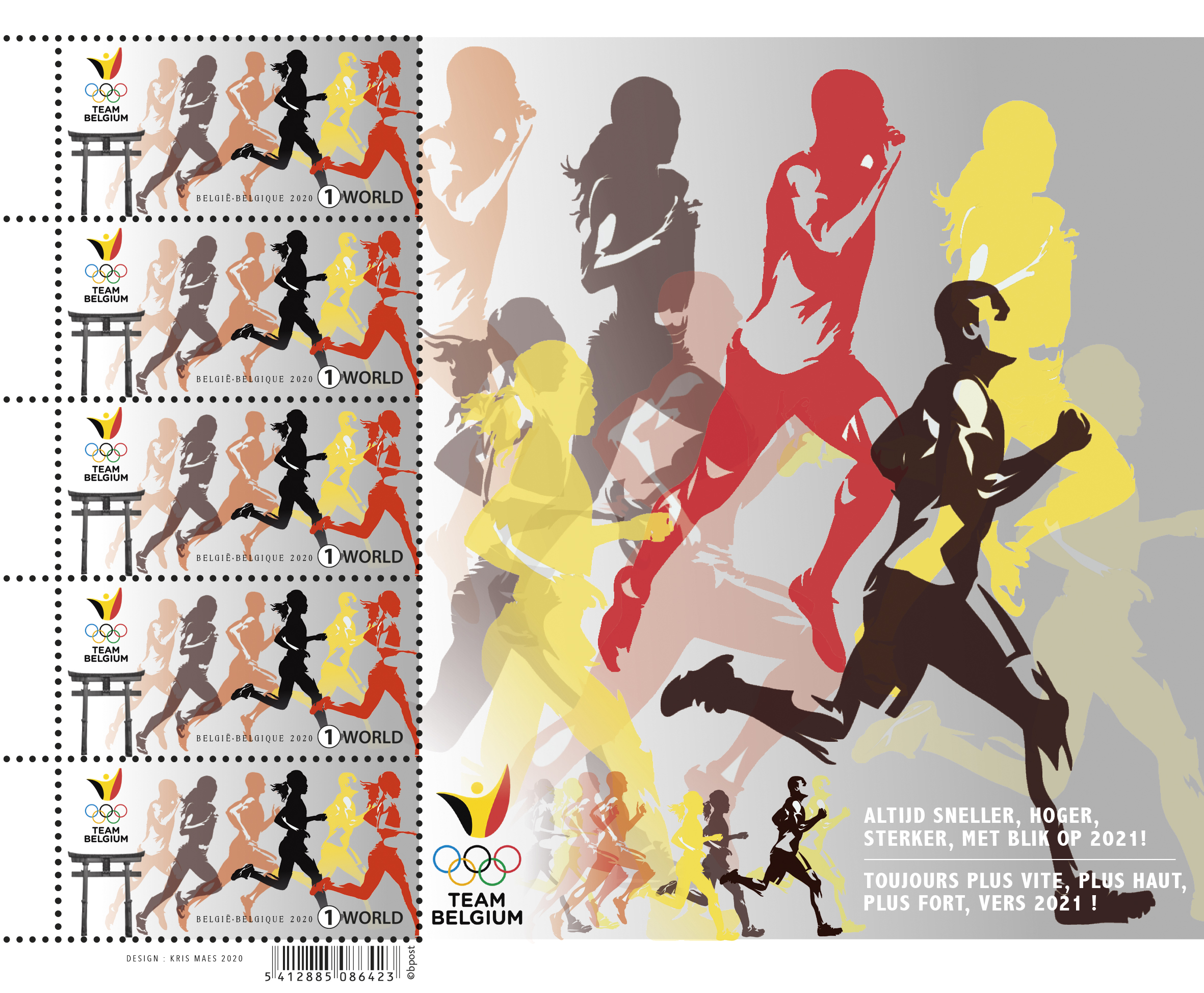 Belgium is expected to compete at the 2020 Summer Olympics in Tokyo. Originally scheduled to take place from 24 July to 9 August 2020, the Games have been postponed to 23 July to 8 August 2021, because of the COVID-19 pandemic. Since the nation’s official debut in 1900, Belgian athletes have appeared in every edition of the Summer Olympic Games, with the exception of the 1904 Summer Olympics in St. Louis.

Belgium women’s basketball team qualified for the first time for the Olympics as one of two highest-ranked eligible squads at the Ostend meet of the 2020 FIBA Women’s Olympic Qualifying Tournament held from 6 to 9 February 2020.

Belgium qualified a single boat in the women’s K-2 200m for the Games by finishing fourth overall and second among those nations eligible for Olympic qualification at the 2019 ICF Canoe Sprint World Championships in Szeged, Hungary, held from 21 to 25 August 2019.

Belgium entered a squad of eight riders (five men and three women) to compete in their respective Olympic road races, by virtue of their top 50 national finish (for men) and top 22 (for women) in the UCI World Ranking.

Following the completion of the 2020 UCI Track Cycling World Championships held in Berlin, Germany from 26 February to 1 March 2020, Belgian riders accumulated spots for both men and women in madison and omnium based on their country’s results in the final UCI Olympic rankings.

Belgium fielded a squad of three equestrian riders into the Olympic team jumping competition by winning the gold medal and securing the first of three available berths for Group A and B at the European Championships in Rotterdam, Netherlands. Meanwhile, two riders were added to the Spanish roster based on the following results in the individual FEI Olympic rankings: a top two finish outside the group selection for Group B (South Western Europe) in eventing and a highest overall placement outside the group and continental selection in dressage.

Belgium men’s field hockey team qualified for the Olympics by winning the gold medal at the 2019 EuroHockey Nations Championships held from 16 to 24 August 2019 in Antwerp.

Team Belgium fielded a full squad of four gymnasts in the women’s artistic gymnastics events by finishing seventh out of nine nations eligible for qualification in the team all-around at the 2019 World Artistic Gymnastics Championships held in Stuttgart, Germany, from 4 October to 13 October 2019.

Belgium qualified one boat in the men’s lightweight double sculls for the Games by winning the B-final and securing the last of seven berths available at the 2019 FISA World Championships in Ottensheim, Austria, from 25 August to 1 September 2019.

Belgian sailors qualified one boat in each of the following classes through the 2018 Sailing World Championships held in Aarhus, Denmark, from 30 July to 12 August 2018 , the class-associated Worlds, and the continental regattas.

Belgium entered one athlete into the taekwondo competition at the Games. Rio 2016 Olympian Jaouad Achab qualified directly for the men’s lightweight category (68 kg) by finishing among the top five taekwondo practitioners at the end of the WT Olympic Rankings. 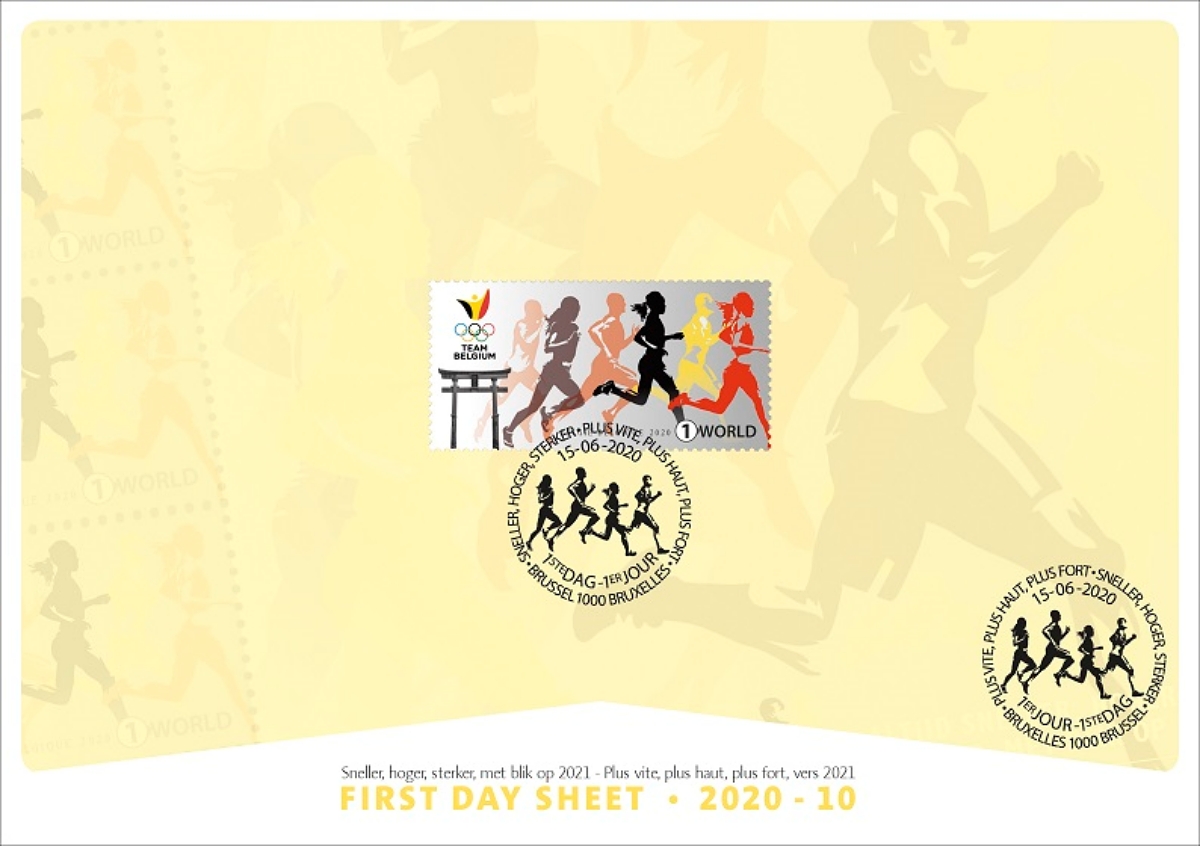