Victory in the Great Patriotic War

On June 26th, 2020, one postage stamps dedicated to the theme “75th anniversary of the Victory in the Great Patriotic War” is put into circulation. 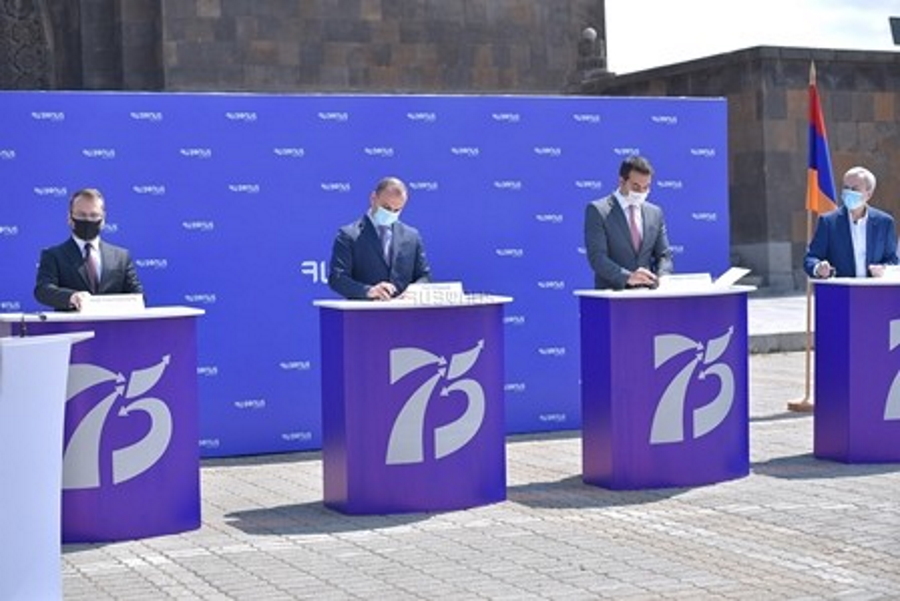 On June 26th, 2020, a postage stamp dedicated to the theme “75th anniversary of the Victory in the Great Patriotic War” has been cancelled and put into circulation on the territory of the “Mother Armenia” Museum of Military History of the RA Ministry of Defense.

The postage stamp with nominal value of 280 AMD is printed in “Cartor” printing house in France with the print-run of 40 000 pcs. The author of the postage stamp’s design is the designer of “HayPost” CJSC David Dovlatyan.

Since 1992, “Haypost” CJSC has issued 19 postage stamps and 3 souvenir sheets related to the Great Patriotic War. 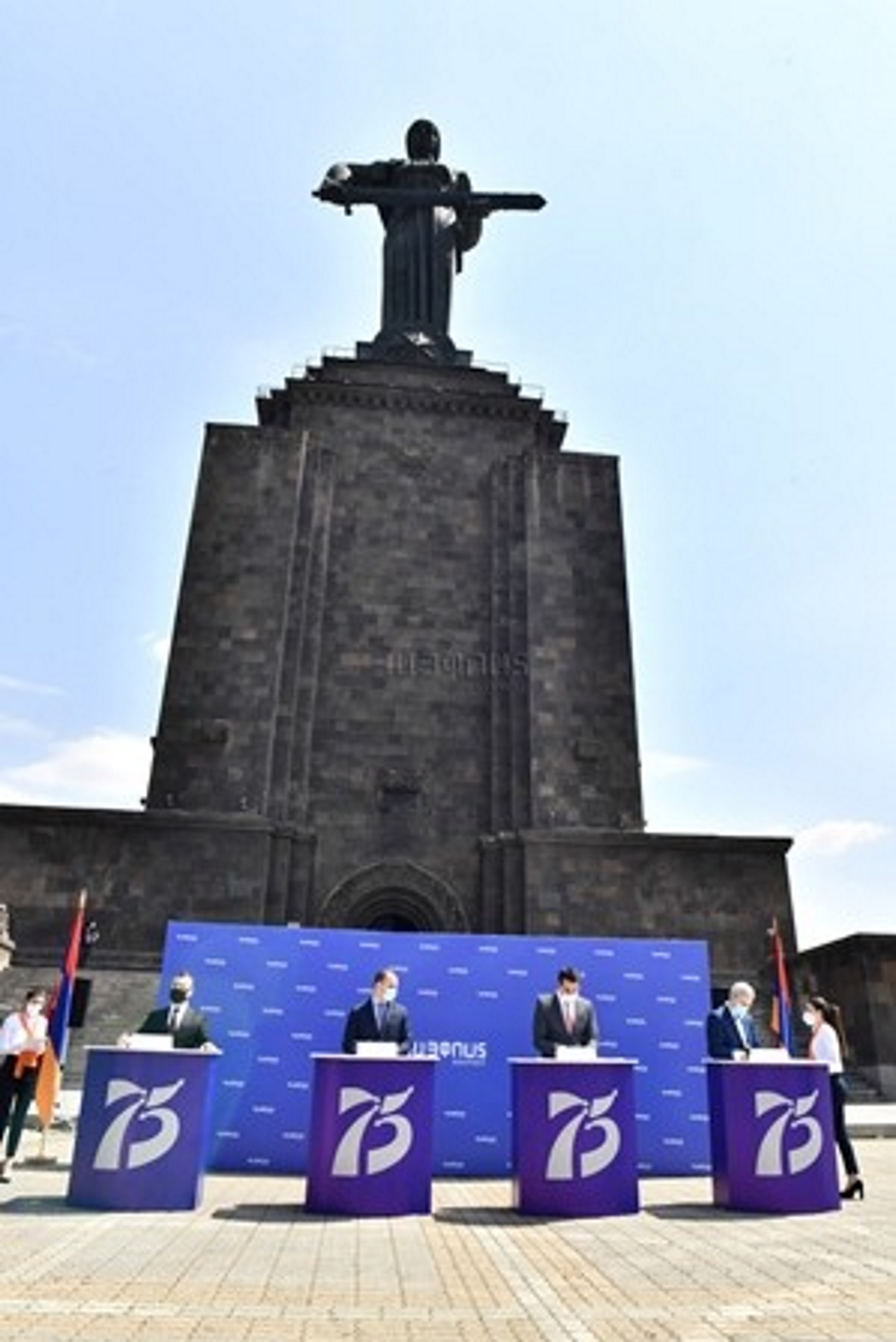 World War II
Armenia participated in the Second World War on the side of the Allies under the Soviet Union. Armenia was spared the devastation and destruction that wrought most of the western Soviet Union during the Great Patriotic War of World War II. The Nazis never reached the South Caucasus, which they intended to do in order to capture the oil fields in Azerbaijan. Still, Armenia played a valuable role in aiding the allies both through industry and agriculture. An estimated 300–500,000 Armenians served in the war, almost half of whom did not return. Armenia thus had one of the highest death tolls, per capita, among the other Soviet republics.

Six special military divisions were formed in Soviet Armenia in 1941–42, partly because so many draftees from the republic could not understand Russian. These six divisions alone had more than 67,000 soldiers. Five of them, the 89th, 409th, 408th, 390th, and 76th Divisions, would have a distinguished war record, while the sixth was ordered to stay in Armenia to guard the republic’s western borders against a possible incursion by neighboring Turkey. The 89th Tamanyan Division, composed of ethnic Armenians, distinguished itself during the war. Led by Major General Nver Safaryan, it fought in the Battle of Berlin and entered Berlin. Many Armenian soldiers also served in two other multi-ethnic divisions. They came not only from Soviet Armenia, but also from the other Soviet republics and other countries with considerable Armenian minorities.

The Armenian SSR provided weapons and rebuilt broken airplanes. Workers donated to the Defense Fund 216,000,000 rubles. Armenia, as a gift, sent to the front 45 wagons of provisions. Armenian communities in the Middle East and the West also donated considerable sums of money to the Soviet government to help construct a series of tanks for the Red Army. These tanks were named after David of Sasun, the hero of an Armenian medieval epic, and Marshal Bagramyan.

Outside of Armenia and the Soviet Union, Missak Manouchian was one of the leaders of the French Resistance. He was captured and executed by the Nazis in 1944, together with over 20 members of FTP-MOI Paris region led by Manouchian, and remains a much respected figure in modern French history. Decorated soldiers who fought in the United States Army include Ernest H. Dervishian (recipient of the Medal of Honor), Harry Kizirian (most decorated serviceman from Rhode Island and one of the most decorated marines of the war), and Victor Maghakian (one of the most decorated American soldiers of the war). Brothers Noel Agazarian and Jack Agazarian both served in the British Royal Air Force, Noel was promoted to Flying Officer and participated in the Battle of Britain before being killed in action in 1941, while Jack also became a field agent for the Secret Intelligence Service and was captured and executed in 1945. Their sister, Monique Agazarian, became one of only 10 young women accepted into the Air Transport Auxiliary for ab initio pilot-training.

Gevork Vartanian was an intelligence agent responsible for thwarting Operation Long Jump, and thus preventing the assassination of Joseph Stalin, Winston Churchill, and Franklin D. Roosevelt at the Tehran conference in 1943.

On the Axis side, the Armenische Legion was created within the Wehrmacht, which consisted mainly of Soviet prisoners of war, who had opted to fight for German forces rather than be sent to the Nazi POW camps or killed. The legion was led by former Defence Minister of Armenia General Drastamat Kanayan, who fought against the Soviet Union on the Eastern Front. Kanayan was among the minority in the legion who volunteered, under the hope of freeing Armenia from Soviet control. The total number of Armenians serving in the German armed forces during the war reached 33,000: 14,000 were placed in field battalions, while another 7,000 served in logistical and other non-combat units. The legion participated in the occupation of the Crimean Peninsula and the Caucasus. It did not take part in the Holocaust, on the contrary several Jewish soldiers captured as POWs were saved by some of the Armenians in the Legion. Several instances included Jews being sent to the battalion to evade detection by the Nazis. Towards the end of the war, many of the legion deserted, defected or revolted. In spite of Nazi Germany acknowledging the Armenians were an Indo-European (or Aryan) people, Adolf Hitler personally stated, “I don’t trust the Armenians.” 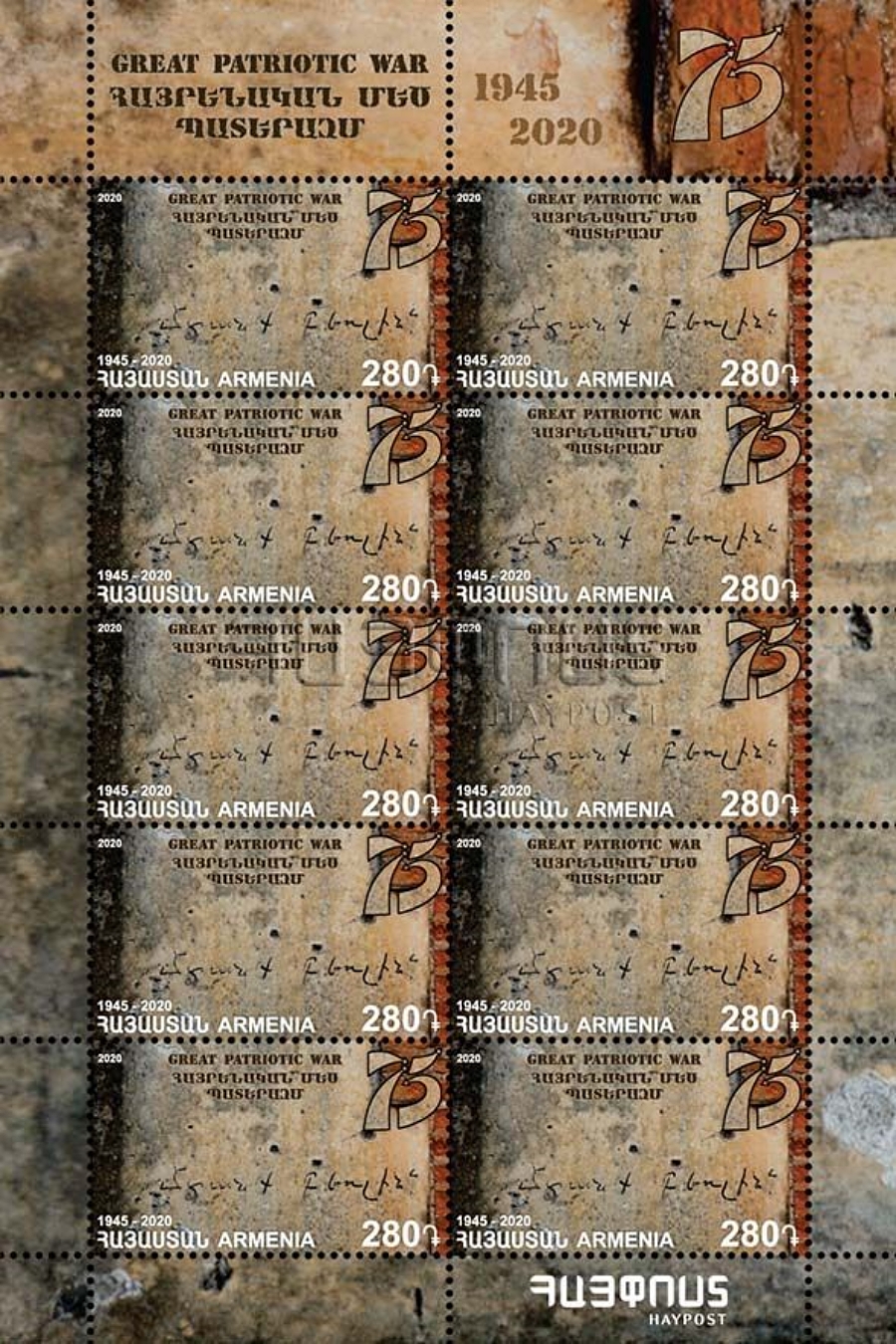 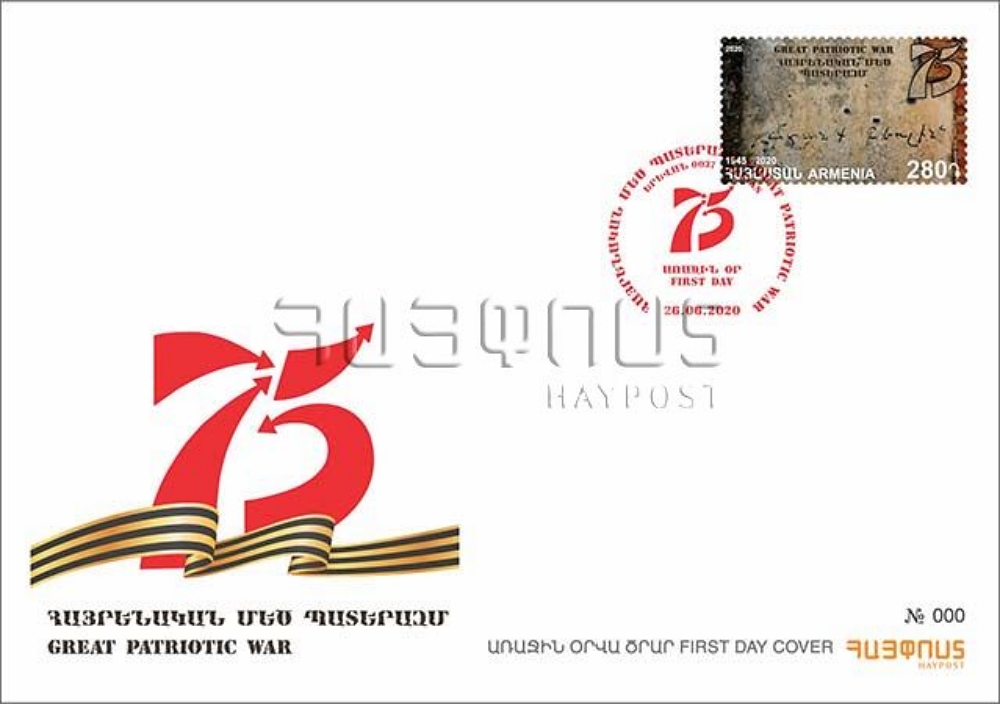