With the issue of this stamp devoted to the Virgin del Collado Stewardship, Correos reveals one of the oldest traditions still preserved in eastern Andalusia, specifically in the Jaen district of El Condado, in the village of Santisteban del Puerto. The Stewardship is a secular custom with its original roots in Medieval Spain. We know from the 14th century Capitulant Books that even then it was already celebrated as a group of devotional demonstrations devoted to the Virgen del Collado, whose image appeared on 26 April 1232 to the labourer, Esteban Solís, who was working his lands on a hill when he brought up a bell while ploughing which had the figure of the Virgin inside it. When the event became known it was credited with being a miracle. The image of the Virgin took the name “Collado” (hill) from the place where she was found and she was named patron saint of Santisteban.

The Stewardship’s main symbol is the “Picture of the Virgin del Collado”. It is a standard depicting the Virgin and the moment she appeared to Solís. The tradition, celebrated year after year in her honour, consists of venerating the Virgin with a wide range of events and festivities held within the Stewardship. Its culmination arises in the “Pascuamayo” festival, which, for the “Old Stewardship” concludes on Whit Monday with the “Picture” being taken up to the chapel of Santa María. Once there, the “Picture” is once again taken by a person who must jump and get the central pole to become a “Steward”, accompanied by two “Companions” who grab the side poles, or rods. This signals the beginning of a “New Stewardship” which will renew the wide range of festivities to entertain the entire village. The “Picture” will be deposited in the Steward’s house and this kicks off the many religious and secular festivals in honour of the Virgin. Local produce donated to the Brotherhood is auctioned; fritters are handed round; wheat donated by the village people is collected by muleteers and mules adorned with coloured ribbons and collars with vibrant bells and rattles; and the appointment of “Mill Commissioners” for the so-called “Charity Day” and the “Lads and Lasses Commissioner”.

The stamp depicts the moment the central pole of the “Picture” is taken by the new Steward and his Companions before the image of the Virgin del Collado and her devotees. The Navarrete Photographic Studio offered the images for the design benevolently. 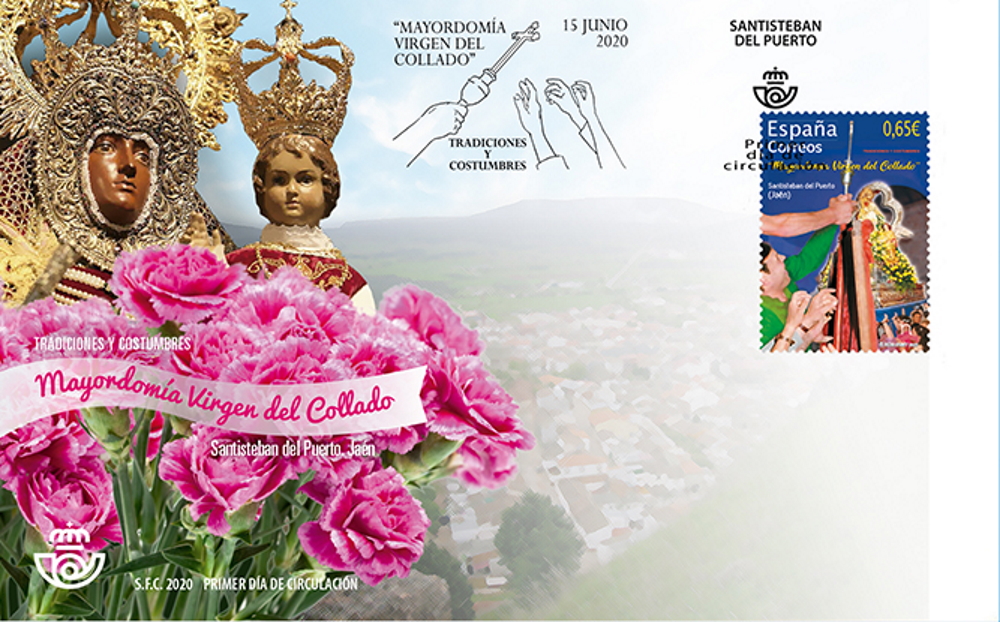