THE ARCHITECTS OF EUROPE. ROBERT SCHUMAN

The desire for a peaceful, united and prosperous Europe was the common goal of a group of visionaries who believed in a magnanimous project which we know as the European Union today.

Many of them began by playing a highly significant role in their home countries and later transferred this role to the construction of a united Europe that would all follow the same path.

They all fought and worked hard to achieve an international community to face up to world powers, above all in matters of the economy, but also in social and cultural matters.

On this occasion, the stamp features Robert Schuman. He was a statistician and important man of law. He was the French Foreign Office Minister between 1948 and 1952.

Along with his fellow countryman, Jean Monnet, he designed and drew up the declaration known as the Schuman Plan, which, this year, celebrates its seventieth anniversary, and which triggered the birth of the European Union.

His proposals included the joint control of coal and steel production which, at the time, were the most important raw materials for the arms industry.

This gave rise to the European Coal and Steel Community, the ECSC.

The stamp shows a three-dimensional cube with the colours of Europe and with Robert Schuman’s face drawn with its flag’s stars.

The 70 years since such a significant event for the history of humankind appear on the stamp which, today more than ever, celebrates the importance of being European. 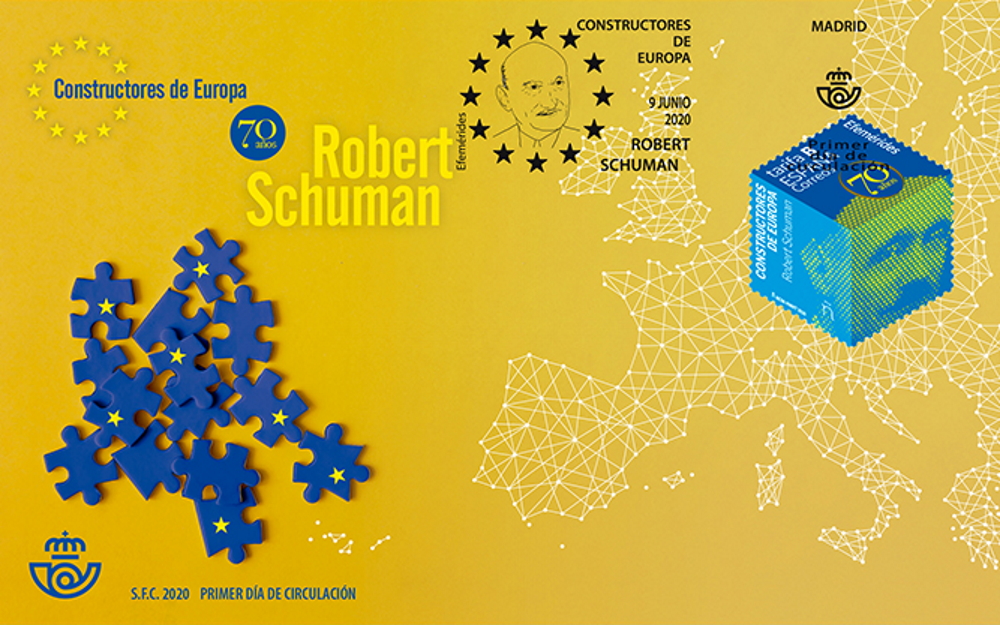