Born into a wealth family in Guipúzcoa in 1502, he moved to New Spain (the Americas), specifically, Mexico, when still young where he occupied various administrative posts.

There is a record that he did some work in the Court of the Inquisition, work that he appears to have done alongside patronage of a Spanish school created by the Augustine fathers.

In recognition of his work, he received lands in addition to others he purchased personally in the Michoacán region.

The expedition that left his name carved into the history books set sail from Puerto de Navidad on 21 November 1564, with Legazpi as captain-general and with secret instructions to change course for the San Lázaro islands. In January they made out the Ladronas islands (Marianas) and took possession of the largest one, Guam. They renamed Leyte as the Philippines in honour of the future king, Philip II, and Mindao island as Césarea Karoli.

They were received by chief Camatuhan and his son, regulator of Samar island, and carried out diplomatic work which gave rise to the foundation by Legazpi, on 8 April 1565, of San Miguel island.

In Cebú, they found the famous image of the Boy Jesus which must have come from a previous expedition.

Subsequently, in 1570, Legazpi entered the town of Manila, which the natives called Maynilad, a prosperous, commercial, Muslim enclave in the south of Luzón island.

The stamp dedicated to the great explorer, like its predecessors, is printed on wood-based paper and contains an illustration of Miguel López de Legazpi along with another of the islands he conquered. 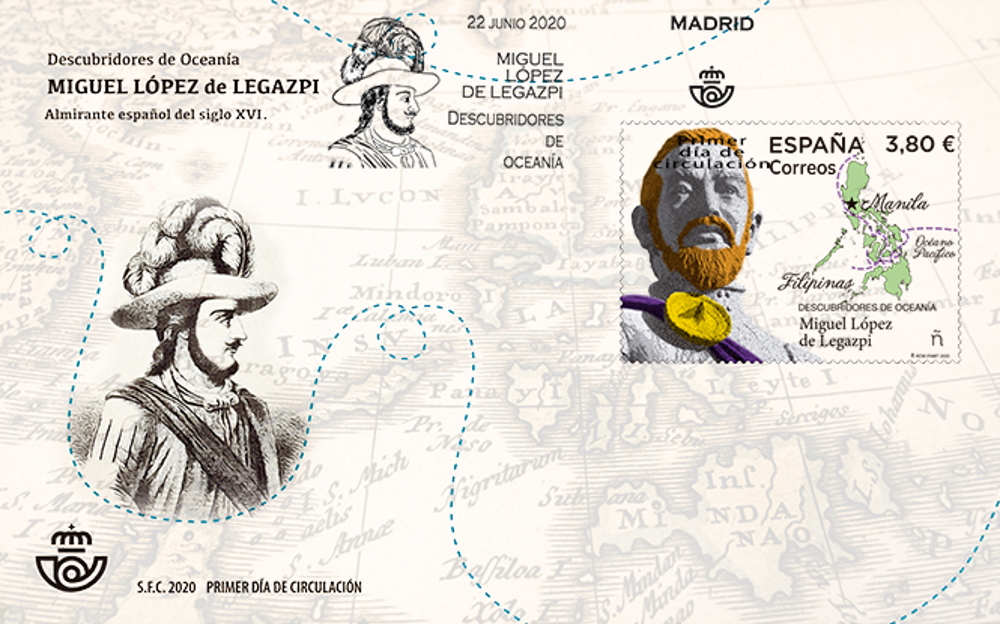