Gastronomy, nature, history and devotion are some of the special features on offer in Huelva for anyone who wants to get to know it. These features are included in the sixth stamp in the “12 months, 12 stamps” series which is being issued this year.

Embodying Huelva’s gastronomy we find Jabugo serrano ham, with a Denomination of Protected Origin. The name alone means a delicacy. It comes from Iberian-breed pigs, reared in the mountains, in the freedom of the “dehesa” (pastureland) and solely fed on acorns and natural pasture. Its production is located in the hear of the Sierra de Aracena and Picos de Aroche.

The Atlantic ocean, on the other hand, offers a multitude of fish and seafood, such as salt-cured tuna, mini squid, Huelva white prawns, and red prawns, which are shown on the stamp.

Intensive cultivation of strawberries surpasses foodie culture to become one of the main agricultural activities in the province, which is now the biggest producer in Europe and one of the main producers worldwide.

Huelva province became a part of World History as it was the place where Christopher Columbus made his preparations for the expedition that would discover the New World, which set sail from the port of Palos de la Frontera in 1492.

The so-called “Columbian Places” include the Santa María de La Rábida Monastery, Moguer and Palos de la Frontera, where there is a reproduction of the Santa María, La Pinta and La Niña ships on the Las Carabelas Wharf.

The Our Lady of Rocío Shrine, the façade of which appears on the stamp, symbolises the religious fervour of one of the most popular pilgrimages in Spain where more than one million people may congregate. The chapel is in the village of El Rocío, in the Almonte district, alongside the Doñana National Park. In particular, a panoramic view of the park, also known as Coto de Doñana, appears as the background on the stamp.

The lower dark blue stripe represents the colour of the provincial flag. 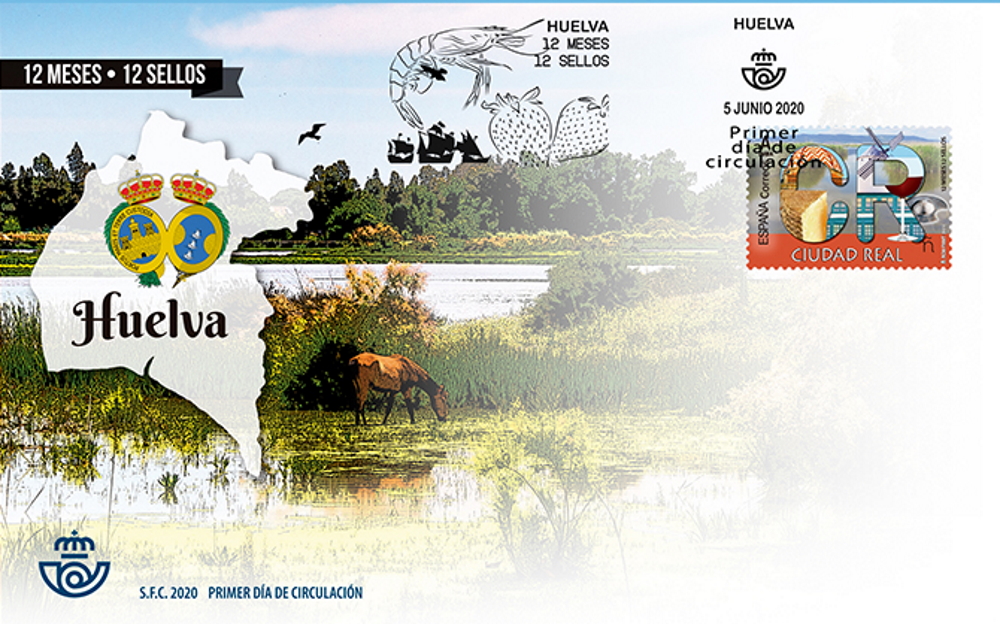