The Asia-Pacific Economic Cooperation (APEC) is an inter-governmental forum for 21 member economies in the Pacific Rim that promotes free trade throughout the Asia-Pacific region. Following the success of ASEAN’s series of post-ministerial conferences launched in the mid-1980s, APEC started in 1989, in response to the growing interdependence of Asia-Pacific economies and the advent of regional trade blocs in other parts of the world; it aimed to establish new markets for agricultural products and raw materials beyond Europe. Headquartered in Singapore, APEC is recognized as one of the highest-level multilateral blocs and oldest forums in the Asia-Pacific region, and exerts a significant global influence.

The heads of government of all APEC members except the Republic of China (which is represented by a ministerial-level official under the name Chinese Taipei as economic leader) attend an annual APEC Economic Leaders’ Meeting. The location of the meeting rotates annually among the member economies, and a famous tradition, followed for most (but not all) summits, involves the attending leaders dressing in a national costume of the host country. APEC has three official observers: the Association of Southeast Asian Nations Secretariat, the Pacific Economic Cooperation Council and the Pacific Islands Forum Secretariat. APEC’s Host Economy of the Year is considered to be invited in the first place for geographical representation to attend G20 meetings following G20 guidelines.

Its strategic priorities are to respond to the Triennial comprehensive policy review (TCPR) – which became in 2008 the Quadrennial comprehensive policy review (QCPR) – and global development priorities, as well as to ensure the UN development system becomes more internally focused and coherent. The UNSDG strategic priorities give direction to UNDG members’ efforts at the global, regional and country level to facilitate a step change in the quality and impact of UN support at the country level. Currently, the UNSDG is one of the main UN actors involved in the development of the Post-2015 Development Agenda. The UNDG was renamed as the UNSDG around January 2018.

Post PNG as the governing administration of postage stamps in Papua New Guinea, through its Philatelic Department has release a set of over-printed APEC 2018 postage stamps. 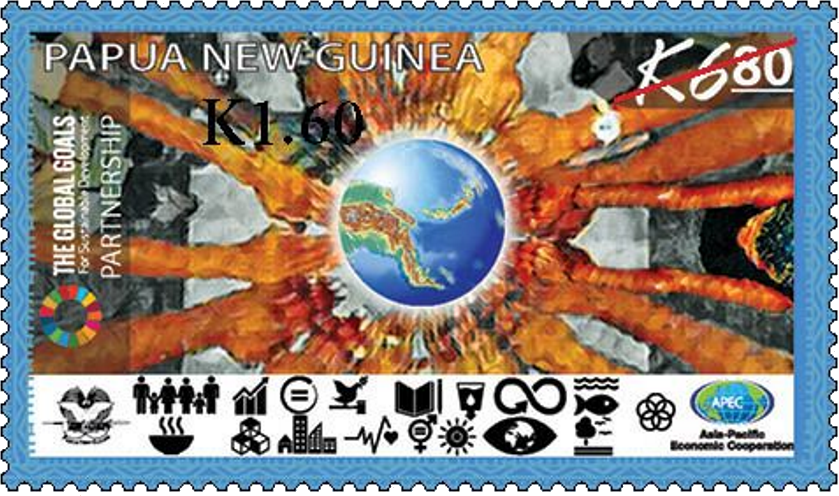 Sustainable, long lasting development requires deep partnerships between all stakeholders in society: governments, the private sector, civil society, NGOs, Faith groups and international partners. PNG, like 192 other countries, is a signatory to the Sustainable Development Goals (SDGs). The interconnected relationship between the SDGs necessitates innovation around partnerships. The spirit of the SDGs is informed by the need for meaningful citizen participation, with engagement of all people is vital. 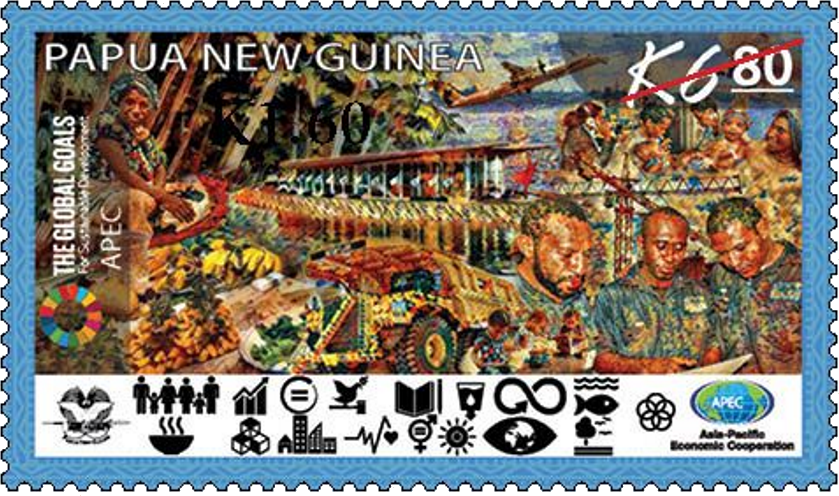 PNG is largely an agrarian, rural country that has significant strategic assets including mineral and natural resources. The APEC is a key opportunity to support trade and investment between Papua New Guinea and APEC members. It is also a unique opportunity to catalyse development through the priority areas of digital connectivity, promote sustainable, inclusive growth and advancing human development in the region. PNG’s focus areas put it in a strong position to leave a legacy of sustainable development. APEC will bring the country together, to connect with all citizens (young and old, females and males regardless of abilities, across the 22 provinces, to achieve better opportunities for all. 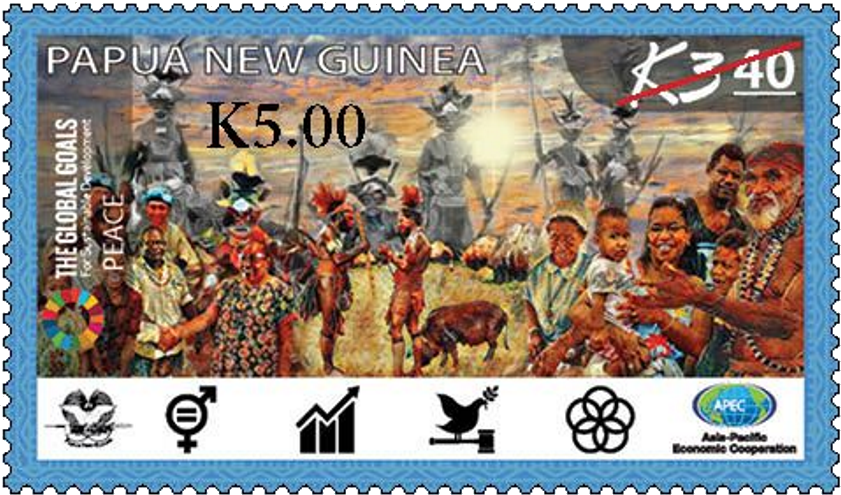 There can be no lasting sustainable development without peace. Strong institutions, capable of implementing key policies and reforms, and fostering inclusive equitable economic growth with transparency and accountability are key requirements. PNG has been a strong advocate globally for human rights for all. The country is also a contributor to UN Peacekeeping. Culturally, PNG has unique methods for settling disagreements between groups. Women, faith based groups and tribal elders play pivotal roles of establishing and maintaining peace. 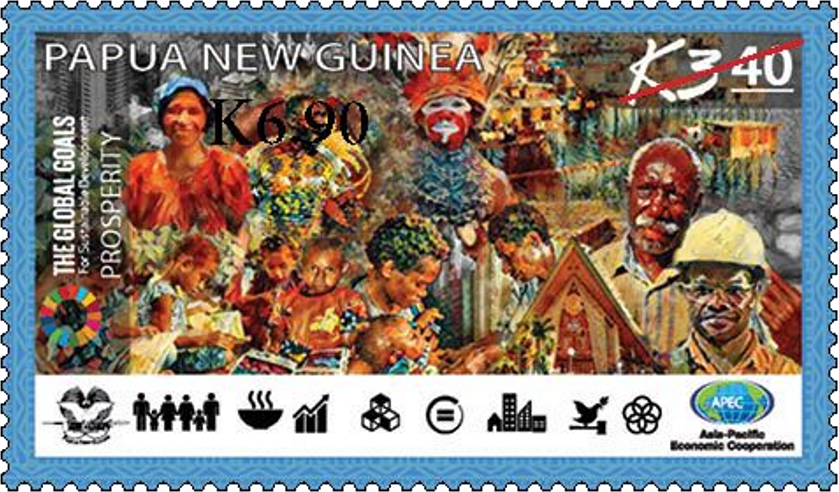 Papua New Guinea remains one of the most rural countries in the world. Most of population live a traditional subsistence lifestyle, supported by the diversity of forests, inland waters and coastal seas. Most people depend on agriculture, fisheries and forestry for their livelihoods. Local markets are vital. Driven by mining and excavation of natural resources, the GDP per capita has doubled over the past decade. The country’s future growth and prosperity will continue to depend on mining but also an expansion of agriculture, tourism, light industries including small and medium enterprises. Improving health, education, water and sanitation and gender equality are also vital elements for sustainable growth of the economy and the well-being of people. The PNG Hunters’ rugby league victory in the Queensland Cup grand final was one of the finest days in sporting history for the nation, inspiring a generation to aspire to achieve more. 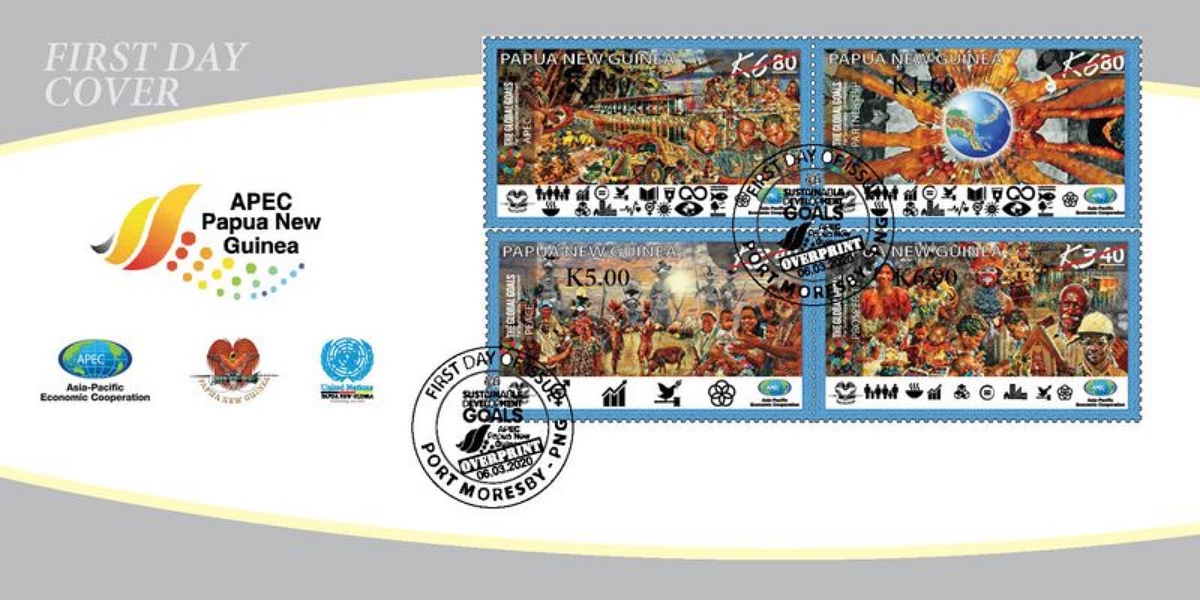