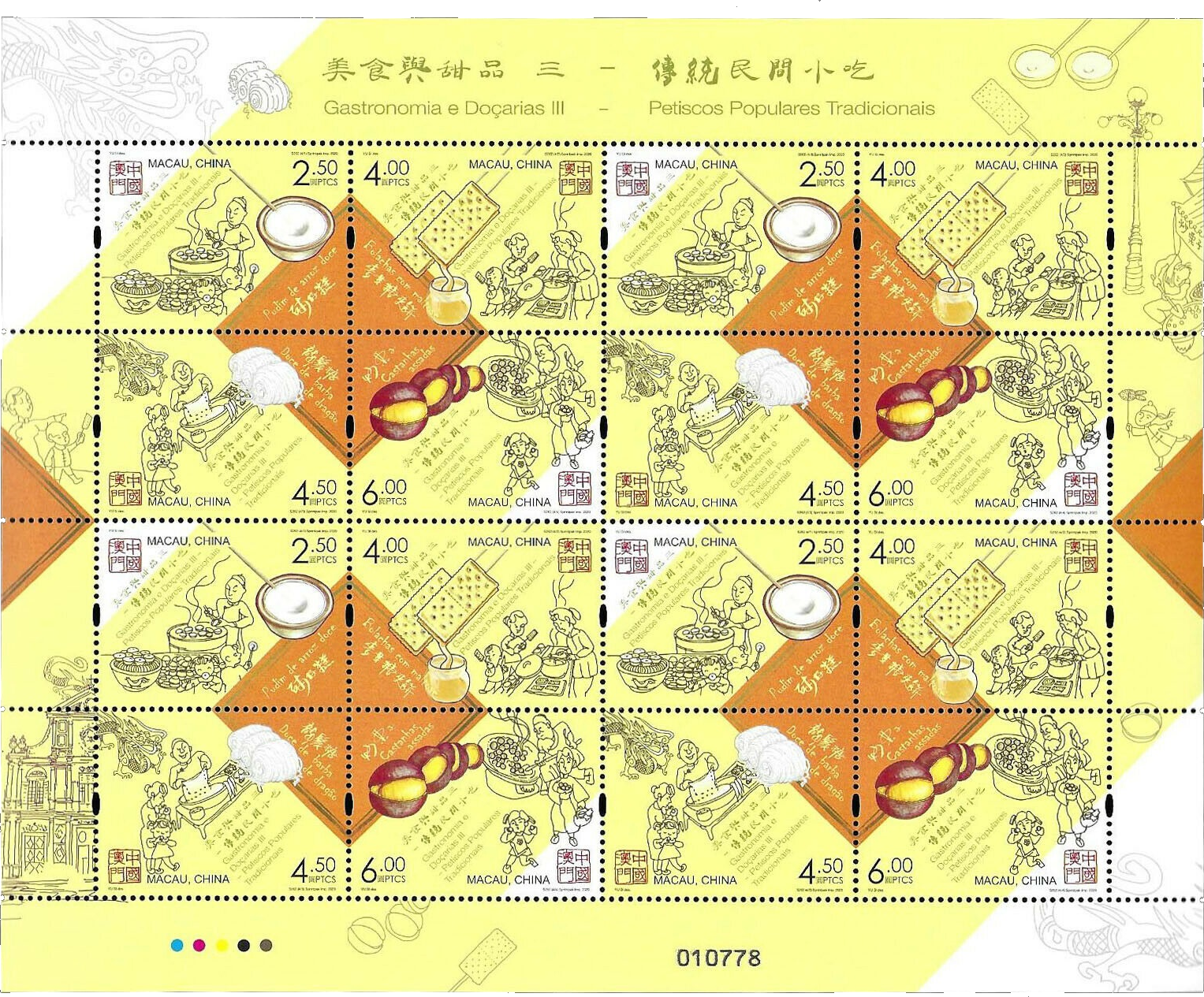 A wide variety of traditional popular snacks have emerged after centuries of evolution. They can both reveal the local customs and reflect the folk wisdoms.

Rice Pudding
Rice Pudding, a kind of Cantonese snack originated from Taishan, has already a history of hundreds of years. As early as the Ming Dynasty, the ancient literati came all the way to look for this snack. According to the Local Chronicle of Taishan County, “Beside the Huafengyu bridge, clear water gushes from the spring among the stones at the bottom of the river …… It can be used to purify the sugar. Steam it in a clay bowl after clarification”. This production method is passed down to today, and the Cantonese Rice Pudding is now popular both nationwide and overseas.

Maltose Crackers
Maltose, also known as “Yi” (malt sugar) in ancient times, is produced through the fermentation of rice, wheat, millet and corn, etc. It has the effects such as moistening the lungs, promoting the secretion of saliva, discharging heat, and treating symptoms of qi deficiency, general malaise, cold and deficiency of spleen and stomach, and dyspnea disorder. Cantonese people like to dip it with coconut shreds for snacks, while Hong Kong and Macao citizens use it to make “sandwiches-like” crackers. And the unique “bartering” feature of the malt sugar, i.e., exchangeable for old and used housewares, makes it very popular with children.

Roasted Chestnut
Roasted Chestnut, also known as “Sugar Roasted Chestnuts”, is made through stir-frying chestnuts with quartz sands and sugar. Fangshan, the suburban area of Beijing, is rich in chestnuts. While since Liangxiang was the distribution centre for chestnuts, they are usually called “Liangxiang chestnuts”. As early as two thousand years ago, the chestnuts already got their fame. According to the history, “Dates and chestnuts are abundant in the north and can feed people who even do not need to work in the fields.” According to the Diary of Xi Jin, “In autumn, at the shops and markets of Yanjing City, people stir-fry chestnuts mixed with sugar and gravels.” Those are the roasted chestnuts!

Sugar Painting
Sugar painting is a form of traditional Chinese folk art using melted sugar to create diverse range of patterns. The artwork can be appreciated and eaten. Originated from the Ming Dynasty, this folk art has evolved into the art of sugar painting nowadays. According to the Qing Dynasty novel “Jian Hu Supplement”, based on the customs of the Ming Dynasty, when people were worshipping, sugar was melted to create various birds, animals, and human figures as sacrificed items. The cast characters were usually dignified and distinguished-looking, like civil ministers and military generals. Therefore, they were also called “Sugar Prime Minister.”

A wide variety of traditional popular snacks have emerged after centuries of evolution, they can both reveal the local customs and reflect the folk wisdoms. This issue includes a set of four stamps and one souvenir sheet, illustrated five different snacks, include: “Rice Pudding”, typical of Guangdong province, originated from the city of Taishan, has already a history of hundreds of years; “Maltose Crackers”, Hong Kong and Macao citizens like to use it to make “sandwiches-like” crackers; “Dragon’s Beard Candy”, made of wheat flour and maltose, is produced by hand-pulling the mixture into threads and then rolling it into crispy candy; “Roasted Chestnut”, made through stir-frying chestnuts with quartz sands and sugar; and “Sugar Painting”, made with melted sugar to create diverse range of patterns, can be appreciated and eaten.

The above issue will be available for sale at the General Post Office, from 9:00a.m. to 5:30p.m., and the Communications Museum, from 9:00a.m. to 12:00 noon. The mail service for the relative philatelic products cancelled with the commemorative postmark will be available on the issue date at the above locations. The philatelic products are as follows:

The stamp designer of this issue is Ms. Yu Si, and the text of the information brochure is written by Mr. Lok Pó.

In order to reduce the influx of people and reduce their concentration, on that day, different service areas will be installed and measures will be taken to access the entrances and control the number of people at the General Post Office. There will also be limitations on the number of correspondence to be sent per philatelist, in order to control the period of stay of each person in the place. 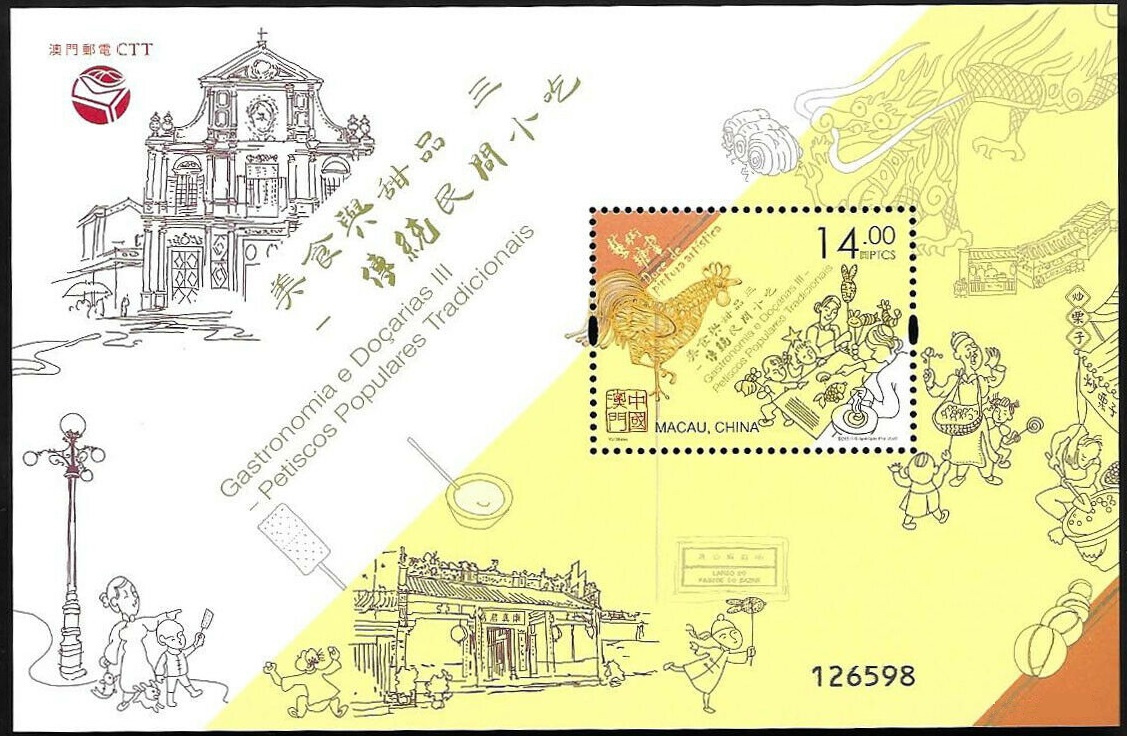 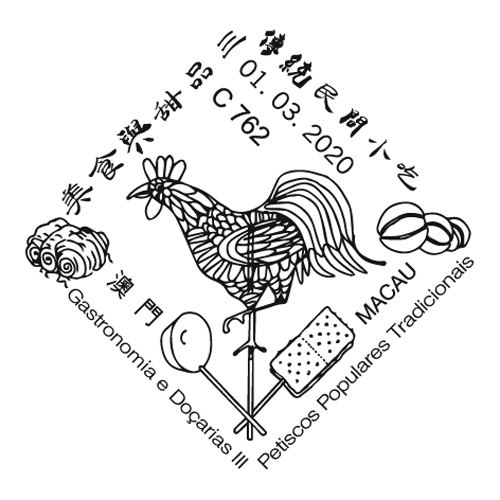