Songbirds In The Neighborhood 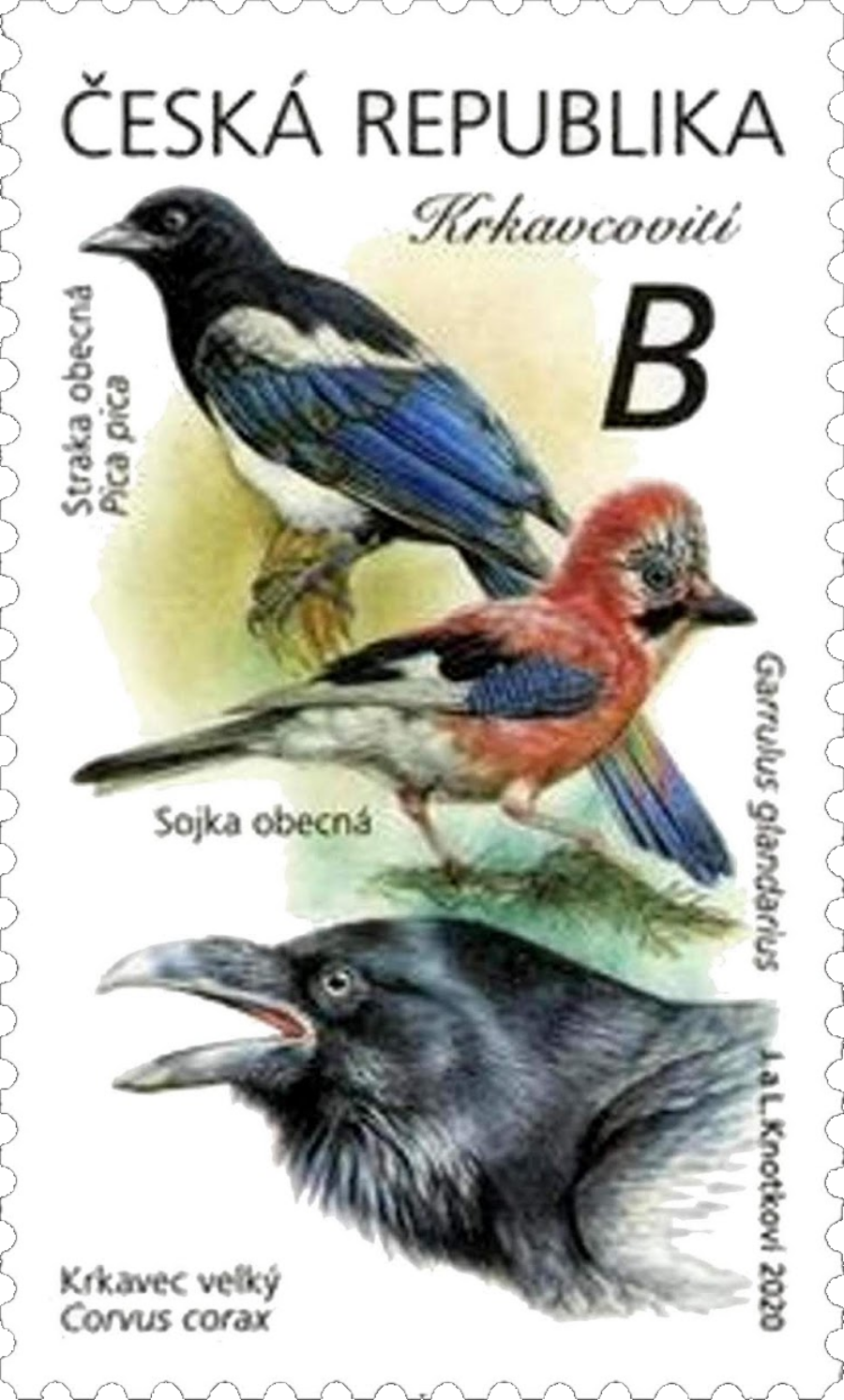 Face value: a stamp identified with the letter B corresponding to the price of Ordinary Letter – Standard up to 50 g in domestic Economy service (current price according to the Price List of Basic Postal Services.

Members of the former family, such as the common magpie (Pica pica), the common raven (Corvus corax), and the Eurasian jay (Garrulus glandarius)

This is a second issue in the series dedicated to songbirds around us. The first issue presented members of the tit and the finch families, this second issue introduces the crows and the thrushes.

Corvidae is a cosmopolitan family of oscine passerine birds that contains the crows, ravens, rooks, jackdaws, jays, magpies, treepies, choughs, and nutcrackers. In common English, they are known as the crow family, or, more technically, corvids. Over 120 species are described. The genus Corvus, including the jackdaws, crows, rooks, and ravens, makes up over a third of the entire family. Corvids are the largest passerines.

Corvids display remarkable intelligence for animals of their size and are among the most intelligent birds thus far studied. Specifically, members of the family have demonstrated self-awareness in mirror tests (European magpies) and tool-making ability (e.g. crows and rooks), skills which until recently were thought to be possessed only by humans and a few other higher mammals. Their total brain-to-body mass ratio is equal to that of non-human great apes and cetaceans, and only slightly lower than that of humans.

They are medium to large in size, with strong feet and bills, rictal bristles, and a single moult each year (most passerines moult twice). Corvids are found worldwide except for the tip of South America and the polar ice caps. The majority of the species are found in tropical South and Central America and in southern Asia, with fewer than 10 species each in Africa and Australasia. The genus Corvus has re-entered Australia in relatively recent geological prehistory, with five species and one subspecies there. Several species of raven have reached oceanic islands, and some of these species are now highly threatened with extinction or have already become extinct. 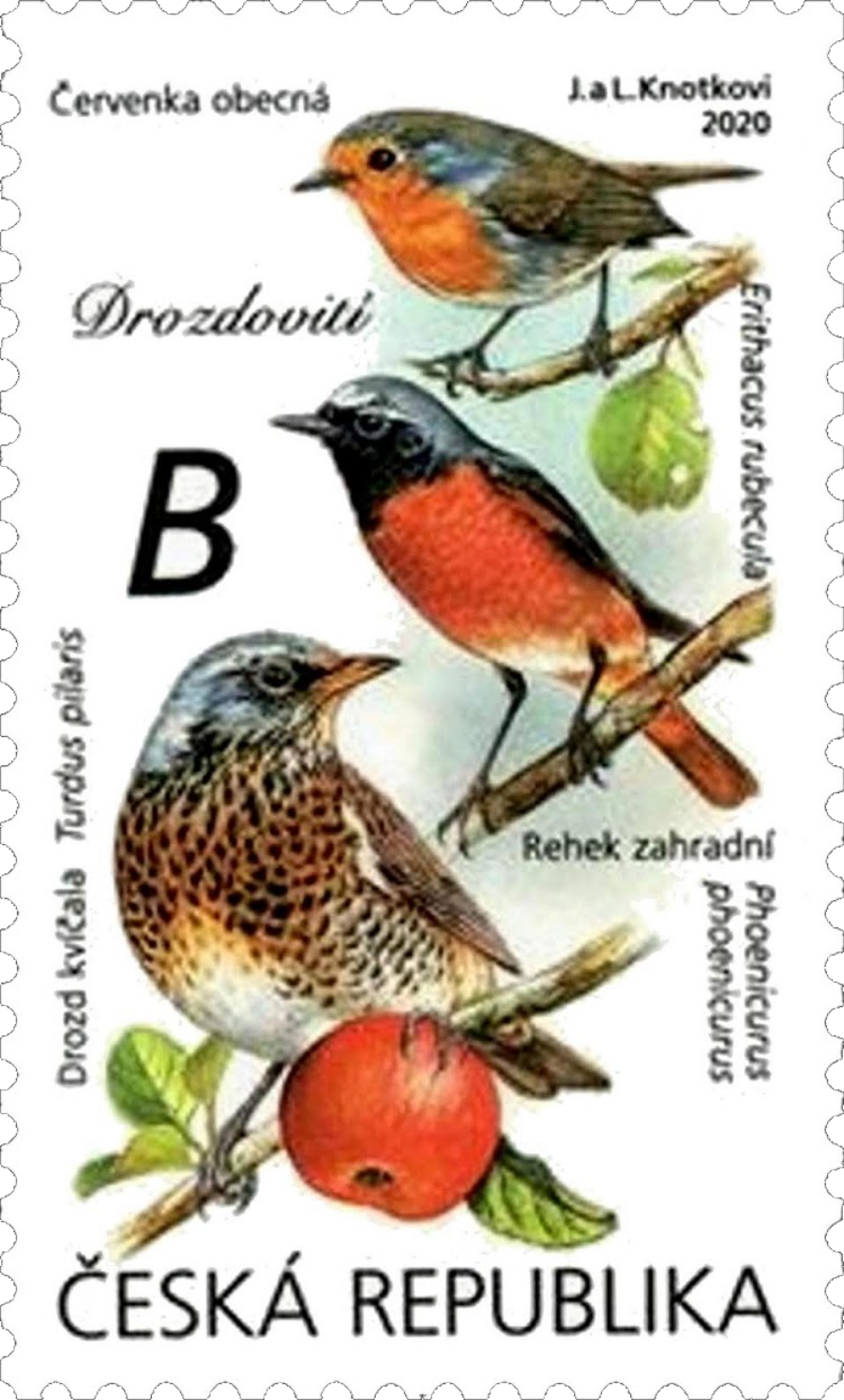 Face value: a stamp identified with the letter B corresponding to the price of Ordinary Letter – Standard up to 50 g in domestic Economy service (current price according to the Price List of Basic Postal Services.

Members of the thrush family, such as the European robin (Erithacus rubecula), the common redstart (Phoenicurus phoenicurus), and the fieldfare (Turdus pilaris)

This is a second issue in the series dedicated to songbirds around us. The first issue presented members of the tit and the finch families, this second issue introduces the crows and the thrushes.

The thrushes are a passerine bird family, Turdidae, with a worldwide distribution. The family was once much larger before biologists determined the subfamily Saxicolinae, which includes the chats and European robins, were Old World flycatchers. Thrushes are small to medium-sized ground living birds that feed on insects, other invertebrates and fruit. Some unrelated species around the world have been named after thrushes due to their similarity to birds in this family.

Thrushes are plump, soft-plumaged, small to medium-sized birds, inhabiting wooded areas, and often feeding on the ground. The smallest thrush may be the forest rock thrush, at 21 g (0.74 oz) and 14.5 cm (5.7 in). However, the shortwings, which have ambiguous alliances with both thrushes and Old World flycatchers, can be even smaller. The lesser shortwing averages 12 cm (4.7 in). The largest thrush is the blue whistling thrush, at 178 g (6.3 oz) and 33 cm (13 in). The great thrush is similar in length, but less heavily built. Most species are grey or brown in colour, often with speckled underparts.

They are insectivorous, but most species also eat worms, land snails, and fruit. Many species are permanently resident in warm climates, while others migrate to higher latitudes during summer, often over considerable distances.

Thrushes build cup-shaped nests, sometimes lining them with mud. They lay two to five speckled eggs, sometimes laying two or more clutches per year. Both parents help in raising the young. In almost all cases, the nest is placed on a branch; the only exceptions are the three species of bluebird, which nest in holes. 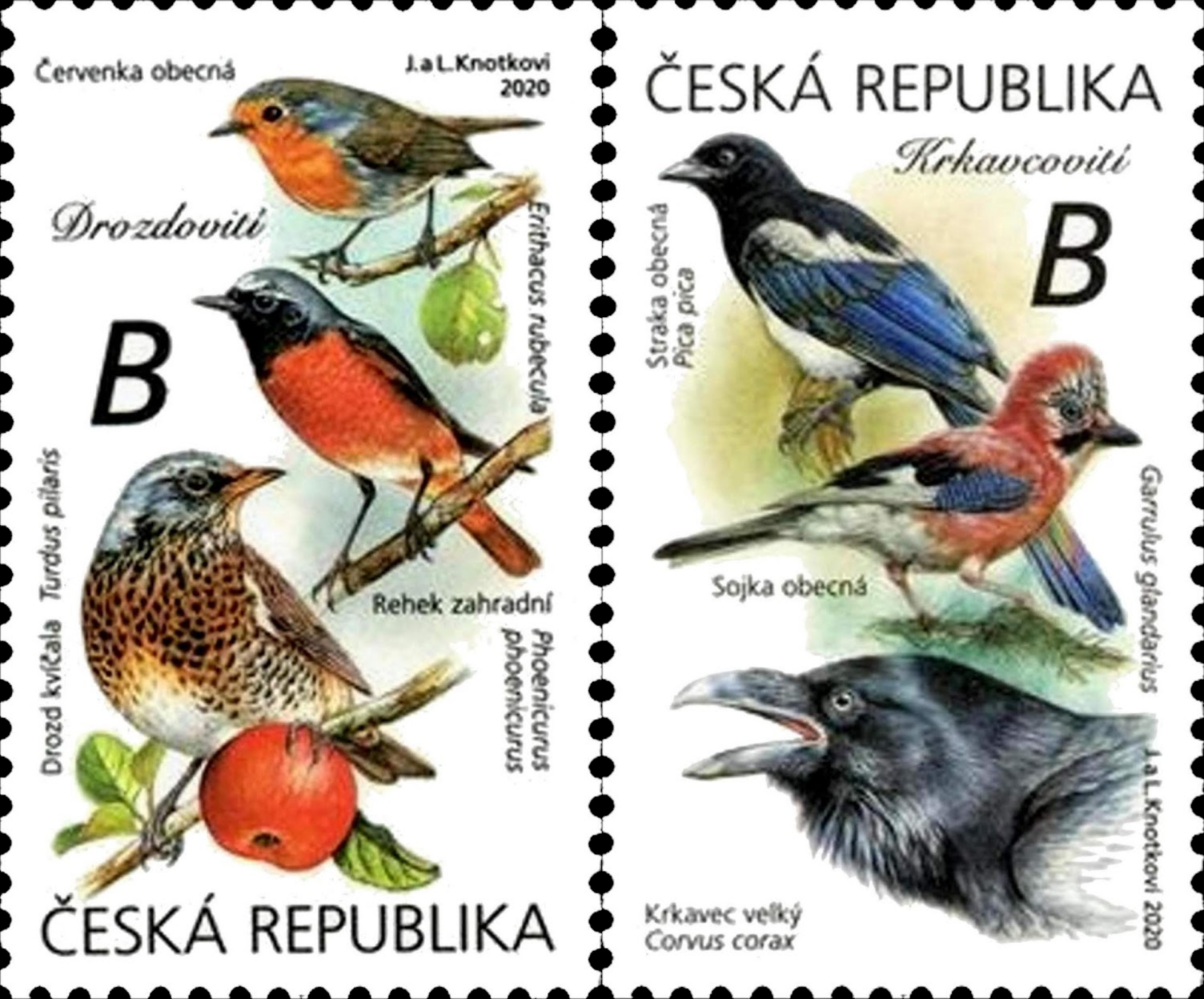