(News from 우정사업본부 / KoreaPost) On 5 June 2020 KoreaPost issued a stamp commemorating the “100th Anniversary of the Victory at the Battle of Bongodon”. This battle was part of a wider fight against Japanese occupation from 1919 onward. The fighting in 1920 is described on the Wikipedia page for an important Korean leader, Hong Beom-do, as: “In June 1920, Hong and his army fought against the Imperial Japanese forces, killing hundreds of Japanese soldiers in the battles of Samdunja(Korean: 삼둔자; Hanja: 三屯子) and Bongodong (Korean: 봉오동; Hanja: 鳳梧洞). In October of the same year, working together with Kim Jwa-jin, Hong again carried out an attack against Japanese troops at what is known as the (Battle of Chingshanli).”

KoreaPost released the stamps in a commemorative (souvenir) stamp sheet of 16 (4×4) stamps of 380 won each, printed by Royal Joh. Enschedé for POSA: 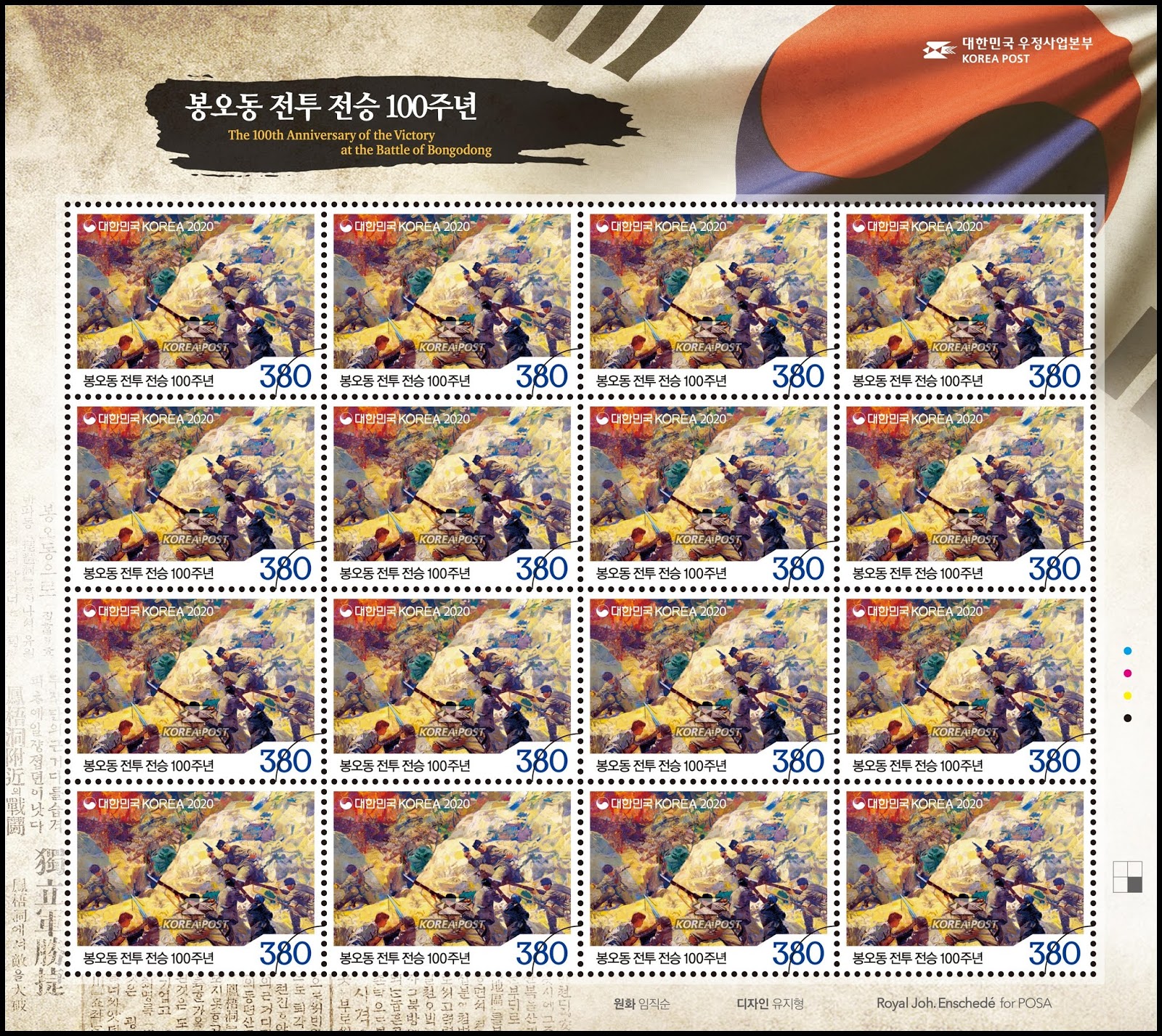 KoreaPost released this text with this new issue:

Many people recognize the period of Japanese colonial rule in Korea as a history of victimhood and humiliation. However, it must be noted that even during the 35 years of Japanese colonial rule, there exist historical records that bear testament to the hard fight against imperial Japan and the priceless victory to protect our national identity. The Battle of Bongodong (Fengwudong), also known as the `1st Round in the War of Independence,` is one of the greatest military victories in Korea`s history of independence movement. Honoring its centennial anniversary, Korea Post is issuing the commemorative stamp 100th Anniversary of the Victory at the Battle of Bongodong.

Upon hearing its defeat in the Battle of Samdunja, the 19th Division of the Japanese Army organized a river crossing pursuit group to go after the independence army. The independence army, who kept an eye on their move, crossed the Duman River on June 7 and lured the group into Bongo Valley in Wangqing County, Jilin Province where they fought fiercely. According to a report by 《Tongnip Sinmun》, a newspaper run by the Provisional Government of the Republic of Korea, the Independence Army killed 157 Japanese soldiers and injured 300 in the Battle of Bongodong. By contrast, only 4 of the independence army were killed and 2 critically injured.

The commemorative stamp for the 100th anniversary of the victory at the Battle of Bongodong comprises General Hong Beom-do`s Battle of Bongodong, a national documentary painting by the Western style painter Yim Jik Soon (1921–1996), and news articles from Tongnip Sinmun–Shanghai (Jun. 22, 1920) and Maeil Shinbo (Jun. 21, 1920). With this commemorative stamp, we hope you remember the independence army who strived to protect our national sovereignty, and appreciate that you are their proud descendants. 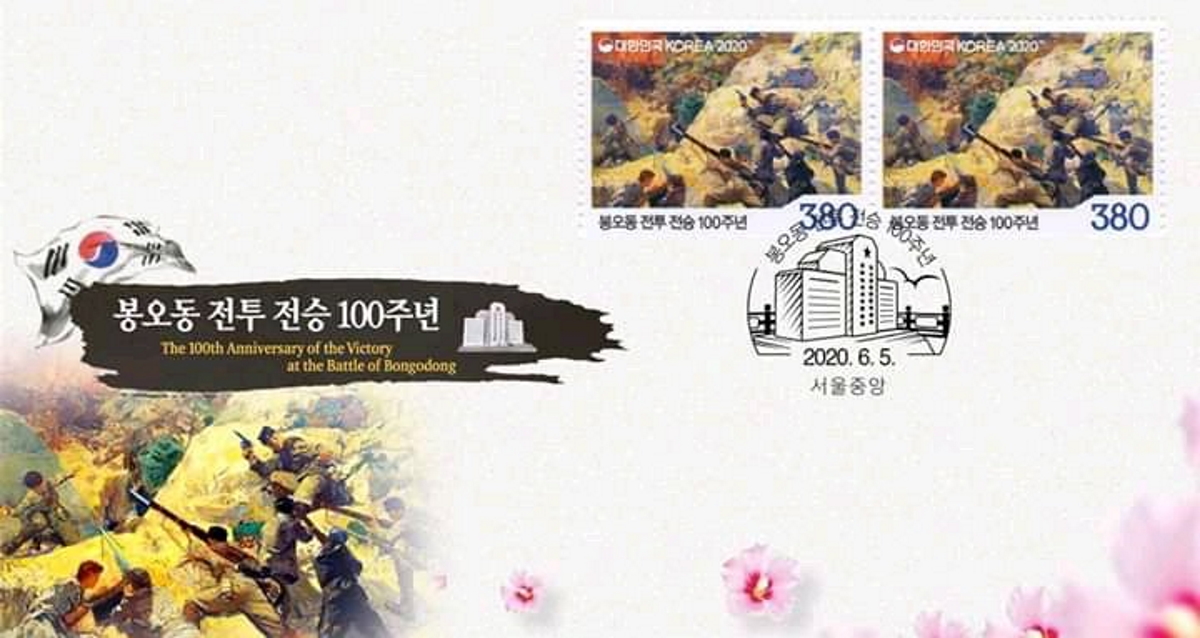 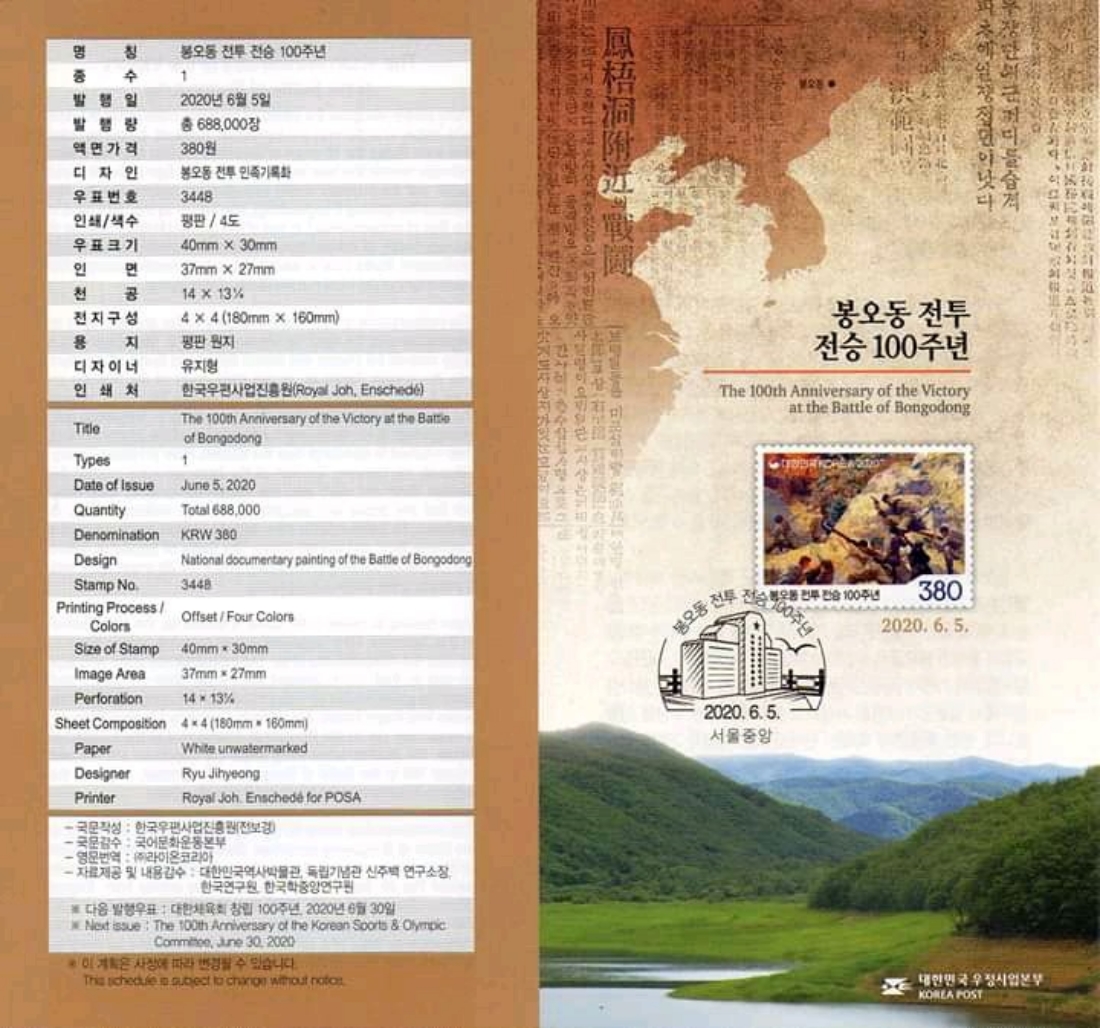 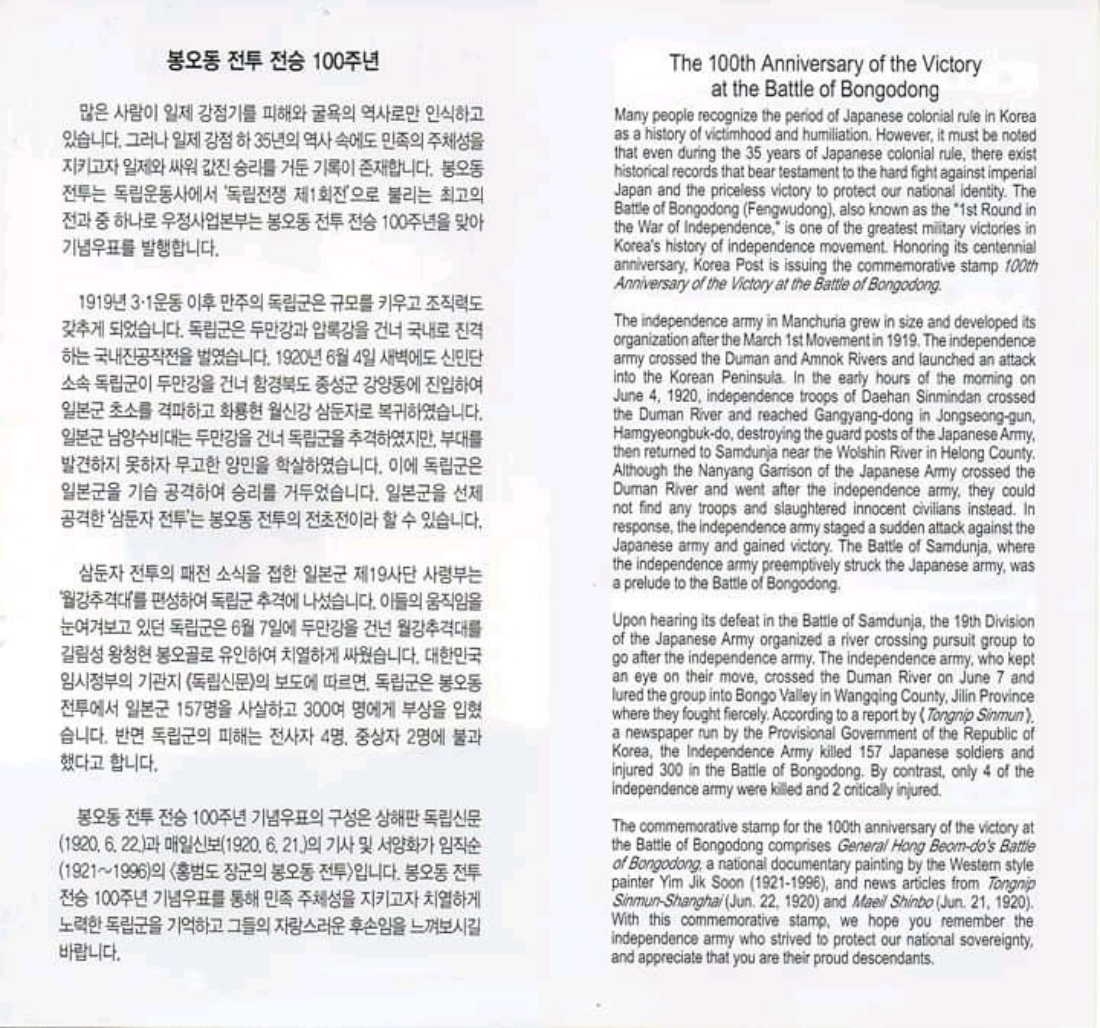 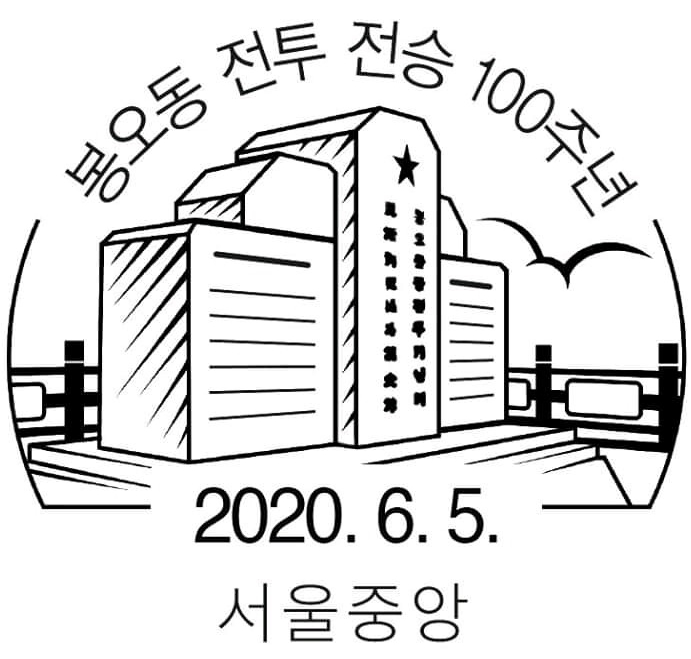