In the past few weeks, as the pandemic most commonly referred to as the Novel Coronavirus COVID-19 continues its hold upon people worldwide, the floodgates have truly opened with a deluge of stamp-related items overwhelming those interested in this particular philatelic theme. When I first attempted to track this type of material in my article “The Philately of COVID-19: Truths, Lies and Rumors,” only four stamps had been officially released with two or three personalized (semi-official) items and a trickle of related postal markings. There were also a number of rumored stamps, a few bogus designs appeared online, and an increasing amount of speculation. As I write this (on 21 May), there are now 31 face-different postage, semi-postal and variable-valuable stamps that have been released through nine different postal administrations around the world. As for the other types of items, they are numerous and perhaps many will remain generally unknown.

The earlier article was in large part inspired by a great deal of misinformation that existed in mid- to late March concerning the expected release of a COVID-19 stamp or stamps by the People’s Republic of China.  After all, this virus was first reported from Wuhan Province and the President of the United States kept often called it the ‘Chinese virus”.  Many collectors remembered the SARS pandemic of 2003 during which China released a single themed stamp in miniature sheets that were quickly snapped up and command high prices on the market to this day. So, demand for a Chinese COVID-19 stamp was quite high. Several preliminary designs made it to social media groups, stating that these had already been issued.  When China Post finally announced the real stamps, many collectors went wild with anticipation.  Then, the designs were recalled on the eve of their issue for a “fix” and thus increasing the interest.

The week that the (slightly) redesigned stamps were issued by China Post, the craze over this stamp theme reached a fever pitch and a huge number of designs for stamps, postcards, postmarks, souvenir folders, and so much more appeared online and elsewhere during the first week of May. It was, to put it bluntly, overwhelming and off-putting.  I gave up even trying to keep track for a while as so many of what was being mentioned were not even actual postage stamps at all.  Some were officially-sanctioned personalized stamps and sheets, of course, but there were others that were simply home-printed labels.  Numerous postcard sets were also created, some with official status but others without.

This article is Part One in an attempt to catalogue those items related to COVID-19.  Each article in this series will cover a different type of item (starting with those released by actual national postal systems). There are links to those stamps for which there are already New Issue Announcements on the Philatelic Pursuits web site.  Some of those posts contain more information and images than others.  I always update those articles as soon as I have additional details and/or better quality images.

Future installments in this COVID-19 Catalogue series will include posts dealing with meter stamps (while many may have been released at the same time as regular postage stamps, I decided to keep them separate); stamp agencies (releases by companies such as the Estonian firm of Stamperija and the Inter-Governmental Philatelic Corporation based in New York); postmarks and other postal markings (including commemorative cancellations, machine and ink-jet slogans as well as such items as Delayed or Sanitized Mail markings); post cards; and will touch upon the many bogus items have been passed off as actual upcoming releases (i.e., items claimed to be from Sri Lanka and Turkey among others).

I had planned to include a section devoted to the personalized stamps (both official and private) but have decided not to publish what I had compiled due to a number of reasons. While some are created by collectors as a way to commemorate this unprecedented time in most of our lives, other have been made purely as a means towards less than aboveboard results.  There are a few that attempt to cheat members of the general public through supposedly rare limited edition items and a growing number are surfacing with direct dies to organized crime, the latest in a history of attempts to use stamps as a form of money laundering.  Rather than attempting to separate the wheat from the chaff, I have chosen to avoid all stamps not officially issued by a legitimate postal administration.  I have learned a great deal about the personalized stamp services offered by many of these administrations and may compile that information into a non-Coronavirus article at some point in the future.

I do not have any set plan for publication of this series; I am putting a bit more priority on other types of new stamp issues and have some behind-the-scenes tasks I would like to take care of (updating the Google Calendar being near the top of my list of to-do’s). I expect we will be seeing COVID-19 stamps for quite some time yet so there is no hurry.

Since there may be a few new collectors dropping in, I thought it best to take care of some terminology:

A postage stamp is a small piece of paper issued by a post office, postal administration, or other authorized vendors to customers who pay postage (the cost involved in moving, insuring, or registering mail), who then affix the stamp to the face or address-side of any item of mail — an envelope or other postal cover (e.g., packet, box, mailing cylinder) — that they wish to send. The item is then processed by the postal system, where a postmark or cancellation mark — in modern usage indicating date and point of origin of mailing — is applied to the stamp and its left and right sides to prevent its reuse. The item is then delivered to its addressee.

Featuring the name of the issuing nation (with the exception of the United Kingdom), a denomination of its value, and often an illustration of persons, events, institutions, or natural realities that symbolize the nation’s traditions and values, every stamp is printed on a piece of usually rectangular, but sometimes triangular or otherwise shaped special custom-made paper whose back is either glazed with an adhesive gum or self-adhesive.

A variable value stamp, is a gummed or self-adhesive postage stamp of a common design, issued by a machine similar to an Automatic Teller Machine, with a value of the user’s choice printed at the time the stamp is dispensed. The value may be variable or from a fixed selection of postal rates. The stamps and machines are typically for use in retail or post office environments. As only the postal value varies from stamp to stamp, these stamps have been described as key type stamps. They are also closely related to meter stamps from postage meters.

A semi-postal stamp, also known as a charity stamp, is a postage stamp issued to raise money for a particular purpose (such as a charitable cause) and sold at a premium over the postal value. Typically the stamp shows two denominations separated by a plus sign, but in many cases the only denomination shown is for the postage rate, and the postal customer simply pays the higher price when purchasing the stamps.

A Postal tax stamp refers to a stamp which raises revenue for charity or war related projects. Postal tax stamps are similar to semi-postals, except their use is mandatory instead of voluntary. They are used to show payment of a compulsory tax on mailing letters and parcels. The taxes often go to a charitable institution or fund. The postal tax stamp originated in Spain and Portugal. Many Balkan nations and some Latin American nations have been the most prolific issuers of postal tax stamps. There are no postal tax stamps in the United States.

Personalized stamps are offered by a number of different postal administrations, including:

A charity label is a label resembling a postage stamp, sold by charities to raise funds] They are generally intended to be used on mail, as a way of advertising the sender’s support of the charity’s cause. Christmas Seals and Easter Seals are perhaps the two best-known types, although many kinds have been made.

While designed to look like postage stamps, they only rarely include a denomination, and never the name of a country. They are distinct from semi-postal stamps which also include a charge for postage. Charity labels are one of several kinds of cinderella stamp.

Prevention and Control of the Coronavirus Covid-19: 2 stamps with varieties 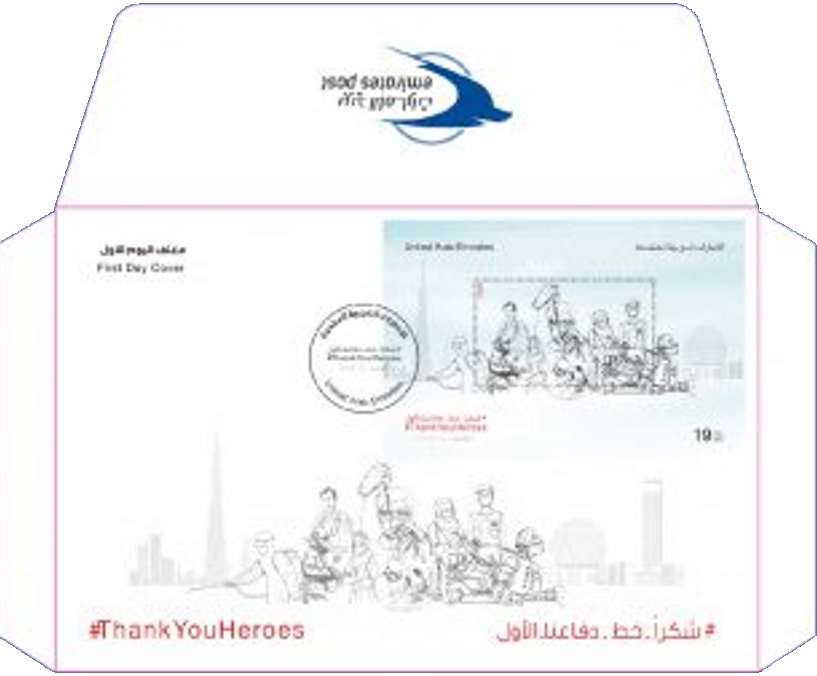 Union is Strength to Fight Against COVID-19: 2 stamps 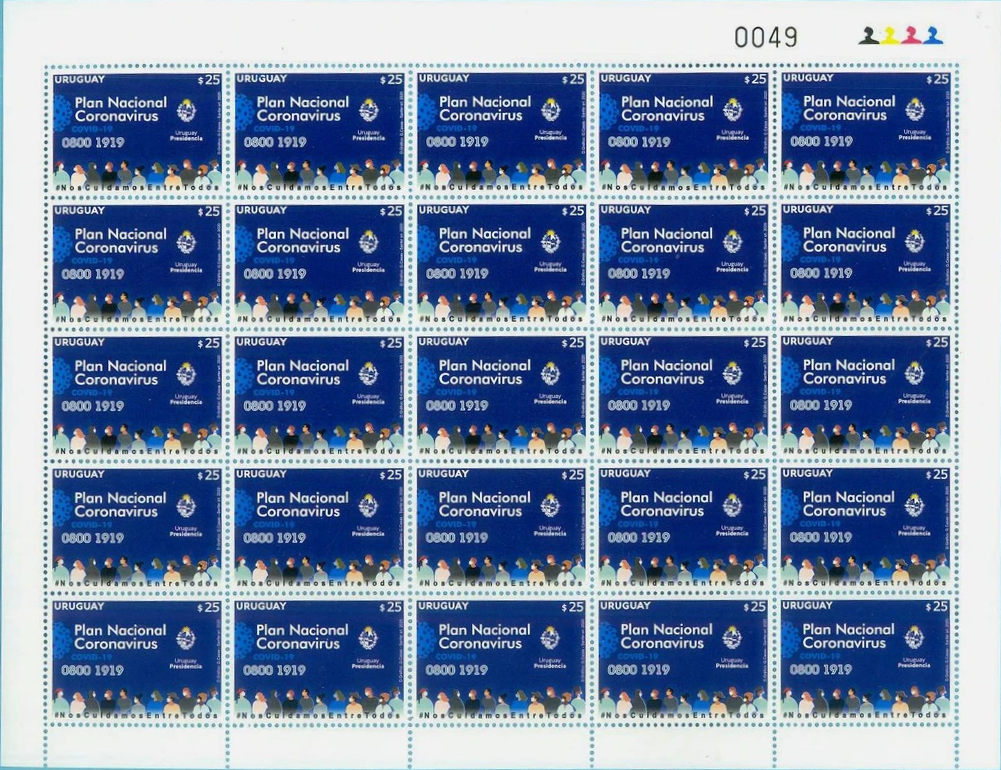 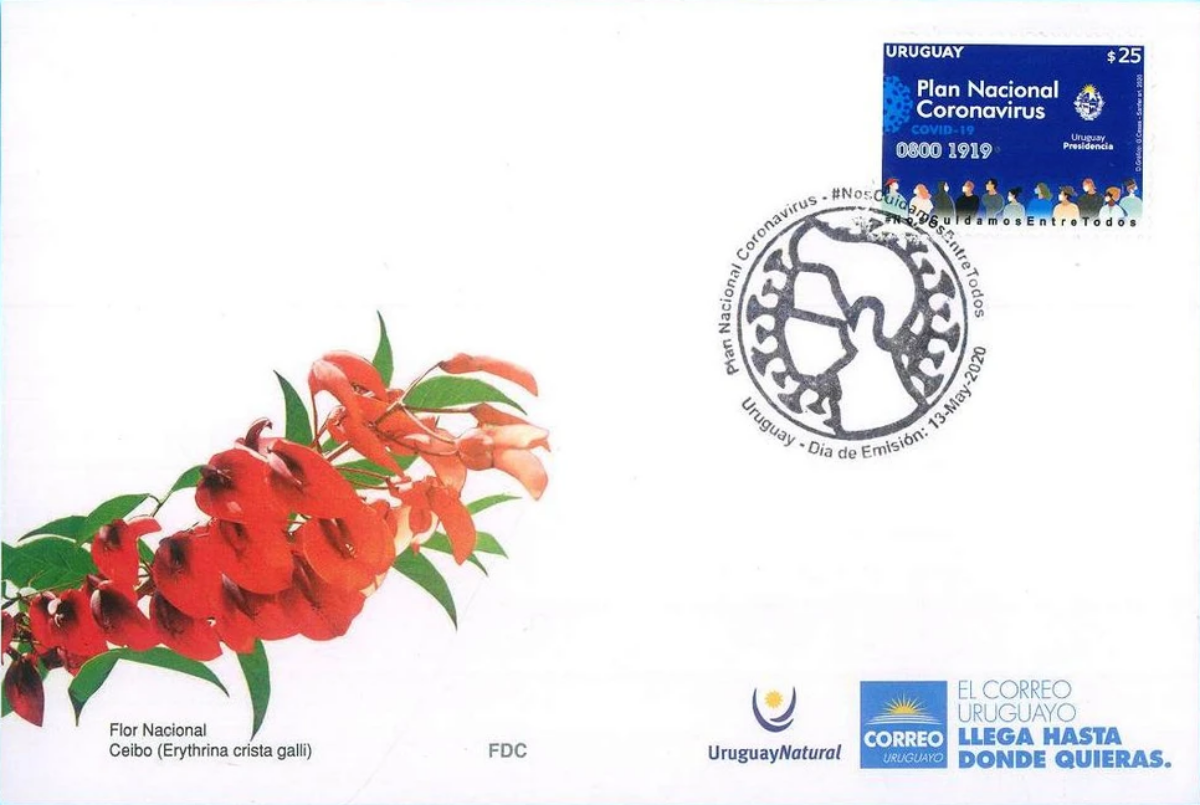 New Zealand Bear Hunt: 6 stamps in a miniature sheet; the purchase of the sheet includes a NZ$3 donation to the New Zealand Red Cross 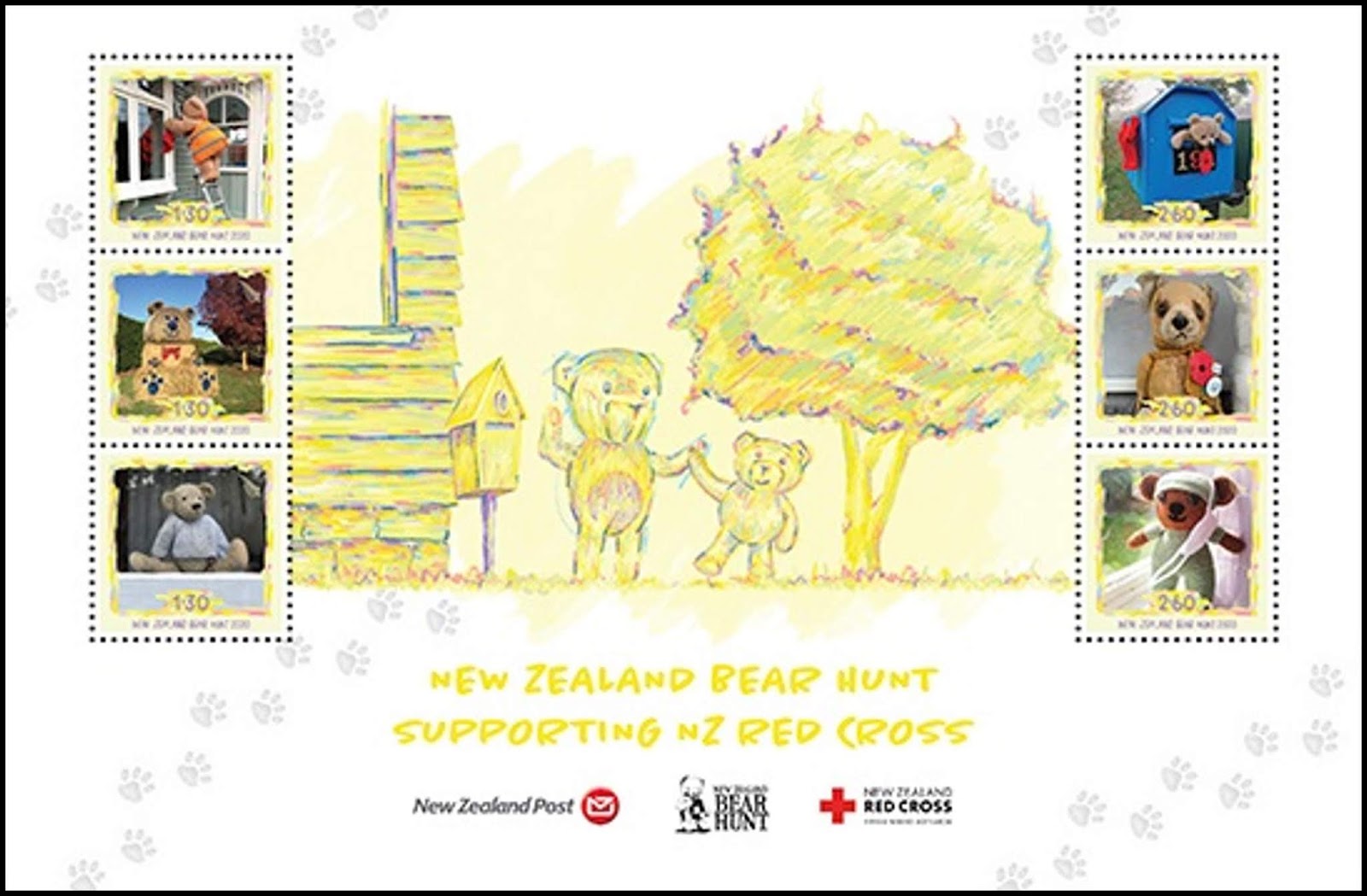 Part 1B:  Stamps Announced & Scheduled to Be Released

Thank You Stamps for Rescue Workers and Firefighters: 2 definitive stamps

Part 1C: Stamps Announced But Not Yet Scheduled

Combat to COVID-19: 6 stamps in a miniature sheet

Fight Against the COVID-19 Virus: 1 stamp

On 21 May, four school children were selected as winning entries in the #AlderneySpirit design contest.  Their artwork will appear on the upcoming stamps.

On 21 May, eight school children were announced as the winners in the #GuernseyTogether stamp design competition.  Their artwork will be used on the upcoming stamps.

Part 1D:  What Happened to These?

This stamp purported to be from Lebanon first appeared in online forums early in April.  However, the Liban Post website has been inaccessible (from Thailand, at least) for the last few months so I have been unable to confirm this as an official item. The design does bear the legend “July 2020” in the lower left corner so this may indicate an intended release date.

Finally, it has been claimed that North Macedonia issued a COVID-19 themed stamp on 9 May and immediately withdrew it.  Several independent sources contacted me about this but nobody has seen an image of the stamp or knows any further details.  If it was indeed withdrawn soon upon release, it is likely to have contained an error in design and may see an eventual release.

As you can see, tracking even those stamps issued by actual postal administrations can be fraught with difficulty. We are still in the early days of the pandemic and the interest in topical stamps related to the Novel Coronavirus COVIID-19.

I will update this page as more stamps are announced and then released as well as upgrade the images when i have them.

PART TWO will list Personalized Stamps in a similar format.  As these are usually released through service companies and not through the postal administrations, firm release dates often remain unknown.  These will be listed in the chronological order of the initial online reports of their appearance.

Assistance on this catalogue, and the articles on the individual stamps is much appreciated.  If you have details on release dates, technical specifications, good-quality scans of any material not yet included (and commercial postage uses of those items already listed), please do not hesitate to contact me.  You can comment below or send me an email at the address listed at the bottom of each page of this site.  I am also active on Twitter or you can join The Stamps of 2020 Facebook Group if you would like to contribute images and information and just want to know more about these stamps.