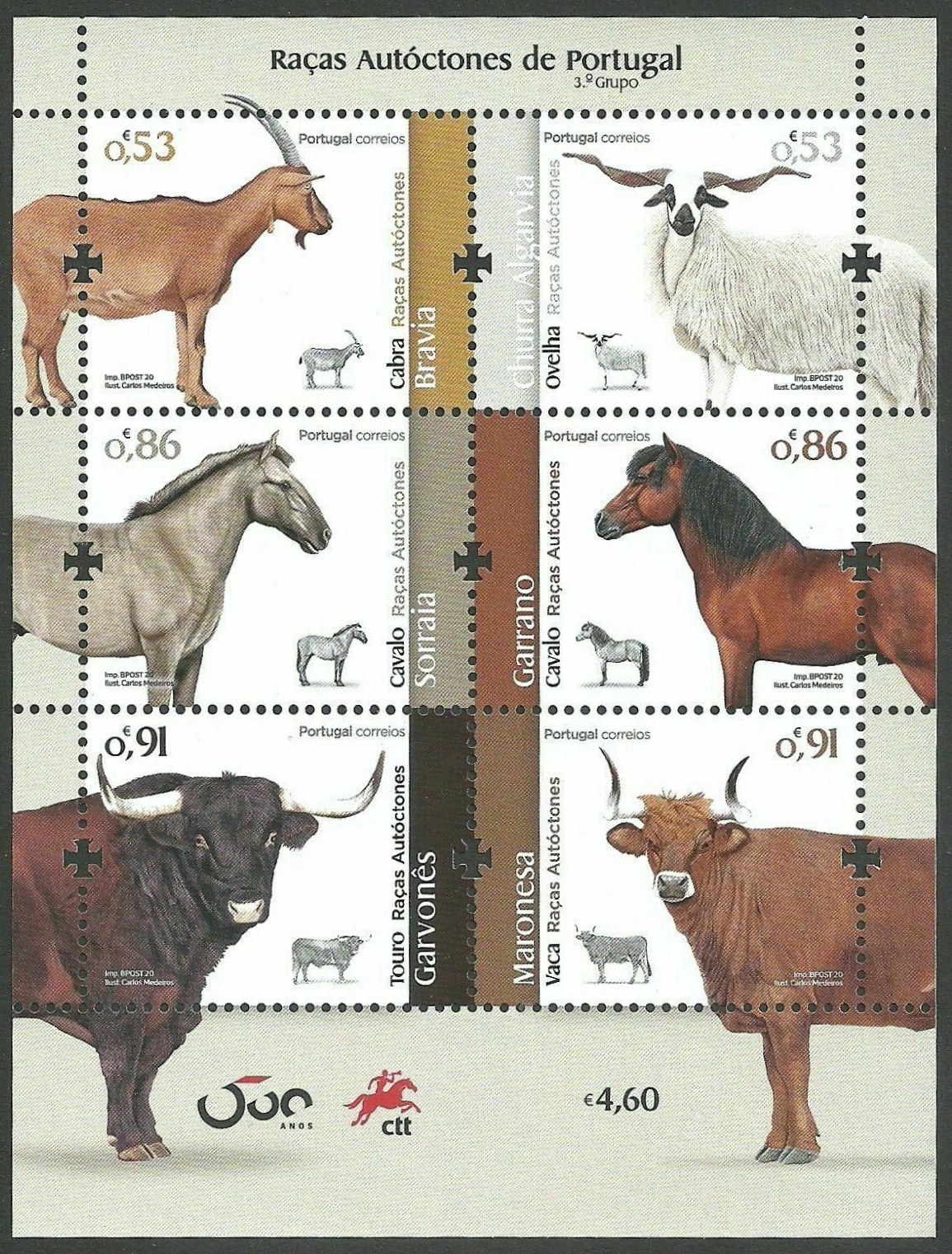 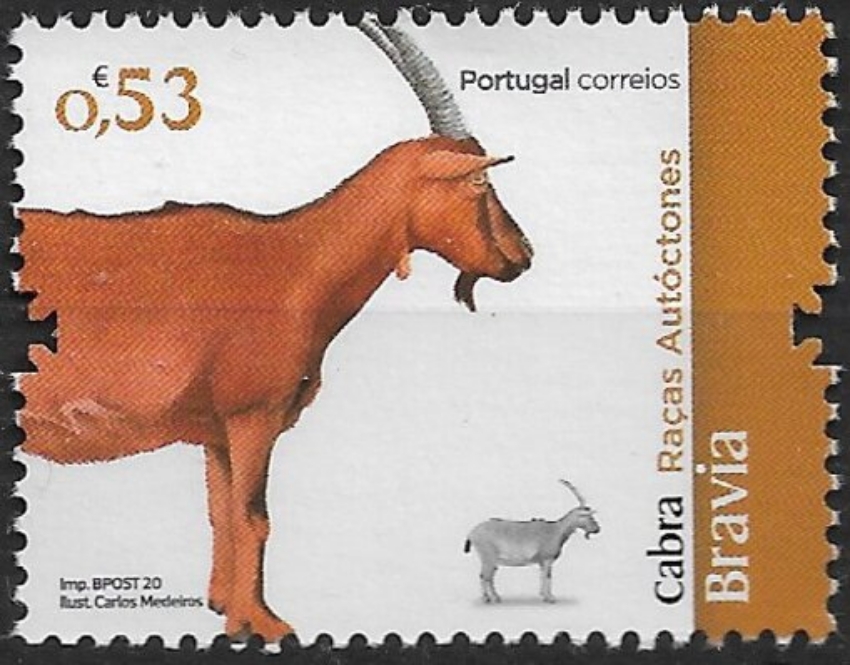 The domestic goat or simply goat (Capra aegagrus hircus) is a subspecies of C. aegagrus domesticated from the wild goat of Southwest Asia and Eastern Europe. The goat is a member of the animal family Bovidae and the subfamily Caprinae, meaning it is closely related to the sheep. There are over 300 distinct breeds of goat. Goats are one of the oldest domesticated species of animal, and have been used for milk, meat, fur and skins across much of the world. Milk from goats is often turned into goat cheese.

Female goats are referred to as does or nannies, intact males are called bucks or billies and juvenile goats of both sexes are called kids. Castrated males are called wethers. While the words hircine and caprine both refer to anything having a goat-like quality, hircine is used most often to emphasize the distinct smell of domestic goats.

In 2011, there were more than 924 million goats living in the world, according to the UN Food and Agriculture Organization.

Goats are among the earliest animals domesticated by humans. The most recent genetic analysis confirms the archaeological evidence that the wild bezoar ibex of the Zagros Mountains is the likely original ancestor of probably all domestic goats today.

Neolithic farmers began to herd wild goats primarily for easy access to milk and meat, as well as to their dung, which was used as fuel, and their bones, hair and sinew for clothing, building and tools. The earliest remnants of domesticated goats dating 10,000 years before present are found in Ganj Dareh in Iran. Goat remains have been found at archaeological sites in Jericho, Choga Mami, Djeitun, and Çayönü, dating the domestication of goats in Western Asia at between 8,000 and 9,000 years ago.

Historically, goat hide has been used for water and wine bottles in both traveling and transporting wine for sale. It has also been used to produce parchment. 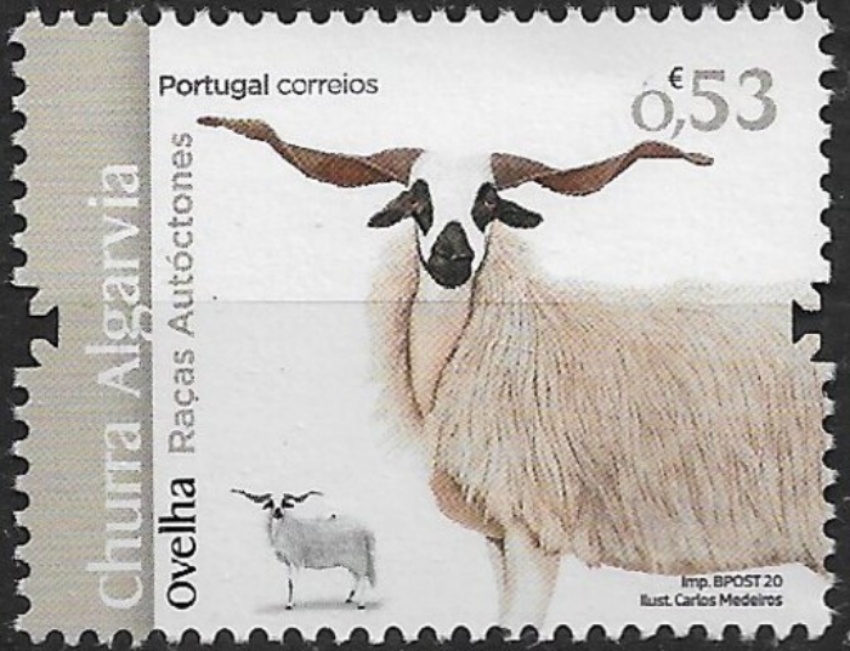 Sheep (Ovis aries) are quadrupedal, ruminant mammals typically kept as livestock. Like most ruminants, sheep are members of the order Artiodactyla, the even-toed ungulates. Although the name sheep applies to many species in the genus Ovis, in everyday usage it almost always refers to Ovis aries. Numbering a little over one billion, domestic sheep are also the most numerous species of sheep. An adult female is referred to as a ewe, an intact male as a ram, occasionally a tup, a castrated male as a wether, and a young sheep as a lamb.

Sheep are most likely descended from the wild mouflon of Europe and Asia; one of the earliest animals to be domesticated for agricultural purposes, sheep are raised for fleeces, meat (lamb, hogget or mutton) and milk. A sheep’s wool is the most widely used animal fiber, and is usually harvested by shearing. Ovine meat is called lamb when from younger animals and mutton when from older ones in Commonwealth countries, and lamb in the United States (including from adults). Sheep continue to be important for wool and meat today, and are also occasionally raised for pelts, as dairy animals, or as model organisms for science.

Being a key animal in the history of farming, sheep have a deeply entrenched place in human culture, and find representation in much modern language and symbology. As livestock, sheep are most often associated with pastoral, Arcadian imagery. Sheep figure in many mythologies—such as the Golden Fleece—and major religions, especially the Abrahamic traditions. In both ancient and modern religious ritual, sheep are used as sacrificial animals. 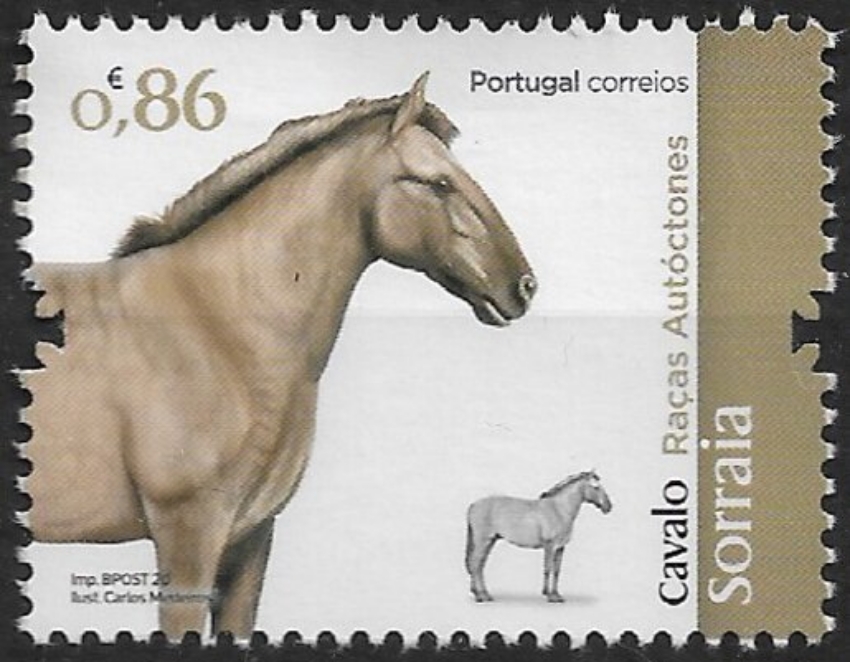 The Sorraia is a rare breed of horse indigenous to the portion of the Iberian peninsula, in the Sorraia River basin, in Portugal. The Sorraia is known for its primitive features, including a convex profile and dun coloring with primitive markings. Concerning its origins, a theory has been advanced by some authors that the Sorraia is a descendant of primitive horses belonging to the naturally occurring wild fauna of Southern Iberia. Studies are currently ongoing to discover the relationship between the Sorraia and various wild horse types, as well as its relationship with other breeds from the Iberian Peninsula and Northern Africa.

Members of the breed are small, but hardy and well-adapted to harsh conditions. They were occasionally captured and used by native farmers for centuries, and a remnant population of these nearly extinct horses was discovered by a Portuguese zoologist in the early 20th century. Today, the Sorraia has become the focus of preservation efforts, with European scientists leading the way and enthusiasts from several countries forming projects and establishing herds to assist in the re-establishment of this breed from its current endangered status.

Although it is known that the Sorraia developed in the southern part of the Iberian peninsula, the breed was isolated and unknown to science until the 20th century. Despite the lack of documentation, attempts have been made to reconstruct its history. Paleolithic parietal art images in the region depict equines with a distinct likeness to the Sorraia, with similar zebra-like markings. Analysis of mtDNA has been performed on Mustangs in the western United States that show similar mtDNA patterns between some Mustangs and the Sorraia breed. Spanish conquistadors took Iberian horses, some of whom closely resembled the modern-day Sorraia, to the Americas in their conquests, probably as pack animals. Similarities between the Sorraia and several North and South American breeds are shown in the dun and grullo coloring and various physical characteristics. This evidence suggests that the Sorraia, their ancestors, or other horses with similar features, may have had a long history in the Iberian region and a role in the creation of American breeds.

Otherwise, the Sorraia breed was lost to history until 1920, when Portuguese zoologist and paleontologist Dr. Ruy d’Andrade first encountered the Sorraia horse during a hunting trip in the Portuguese lowlands. This remnant herd of primitive horses had continued to live a wild existence in these lowlands, which were rather inaccessible and had been used as a hunting preserve by Portuguese royalty until the early 1900s. At the time of d’Andrade’s initial meeting the breed, the horses were ill-regarded by native farmers, although they were considered hardy native fauna that lived off of the uncultivated lands and salt marshes in the local river valleys. For centuries, peasant farmers of the area would occasionally capture the horses and use them for agricultural work, including threshing grain and herding bulls. 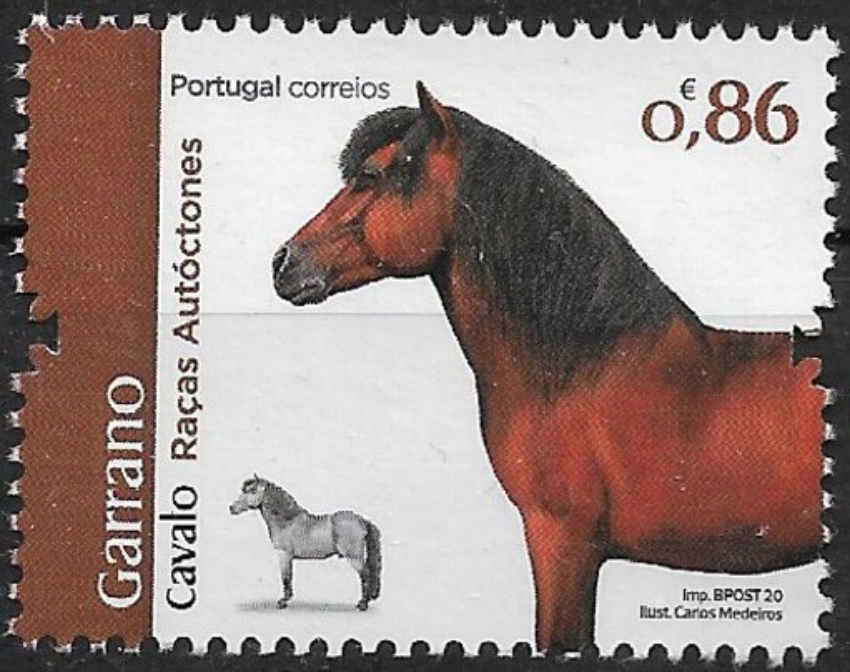 The Garrano, from Gaelic gearran, a pony of the Iberian horse family, is an endangered breed of horse from northern Portugal, mainly used as a pack horse, for riding, and for light farm work. An ancient breed, the Garrano has remained largely unchanged for thousands of years but is in decline due to predation and loss of interest in breeding for agricultural use.

It has many similarities with the Galician horse and the Dartmoor pony.

The horse is believed to be an ancient breed, with Northern Iberian Paleolithic cave paintings depicting horses with similar profiles. The similarities between the breed and the depicted animals lead to the conclusion that the breed’s appearance has remained stable. There is genetic evidence that the horse originates in Celtic regions, with additional research suggesting the later introduction of males for breeding from north Europe. Through cross-breeding with the Andalusians brought over by the Spanish conquistadors and the local Sorraia horse, they produced the Galica Mountain Pony. In the 20th century, the breed was infused with Arab blood.

The breed’s numbers have been depleted by wolf predation, as they are a preferred prey. They have also declined as they have become less attractive for agricultural work, as a result of which they have been crossbred with other species for meat. As of 2010, the population of Garrano was estimated at approximately 2,000, with a sex ratio of one stallion to 13 mares. 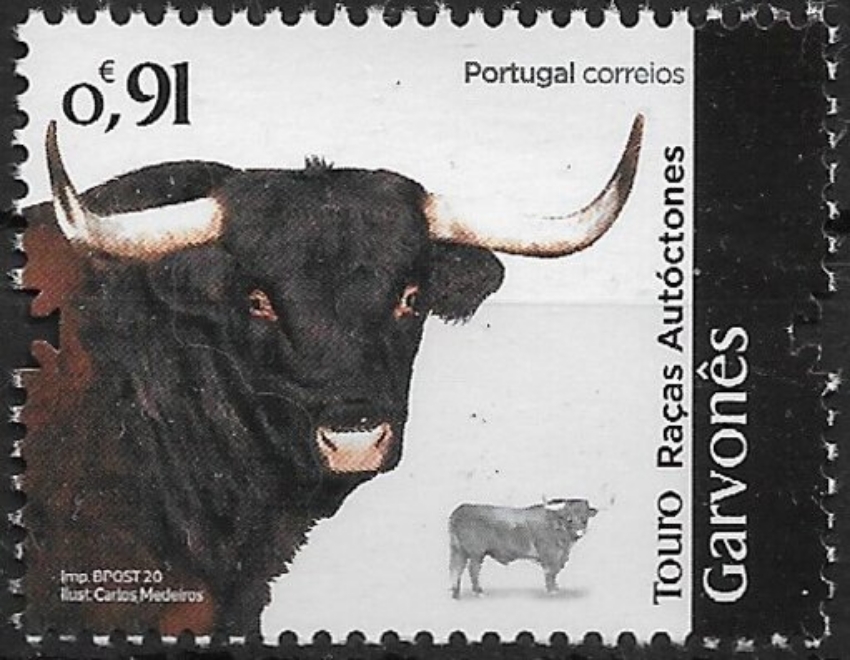 Cattle, or cows (female) and bulls (male), are the most common type of large domesticated ungulates. They are a prominent modern member of the subfamily Bovinae, are the most widespread species of the genus Bos, and are most commonly classified collectively as Bos taurus.

Cattle are commonly raised as livestock for meat (beef or veal, see beef cattle), for milk (see dairy cattle), and for hides, which are used to make leather. They are used as riding animals and draft animals (oxen or bullocks, which pull carts, plows and other implements). Another product of cattle is dung, which can be used to create manure or fuel. In some regions, such as parts of India, cattle have significant religious meaning. Cattle, mostly small breeds such as the Miniature Zebu, are also kept as pets.

Around 10,500 years ago, cattle were domesticated from as few as 80 progenitors in central Anatolia, the Levant and Western Iran. According to an estimate from 2011, there are 1.4 billion cattle in the world. In 2009, cattle became one of the first livestock animals to have a fully mapped genome. 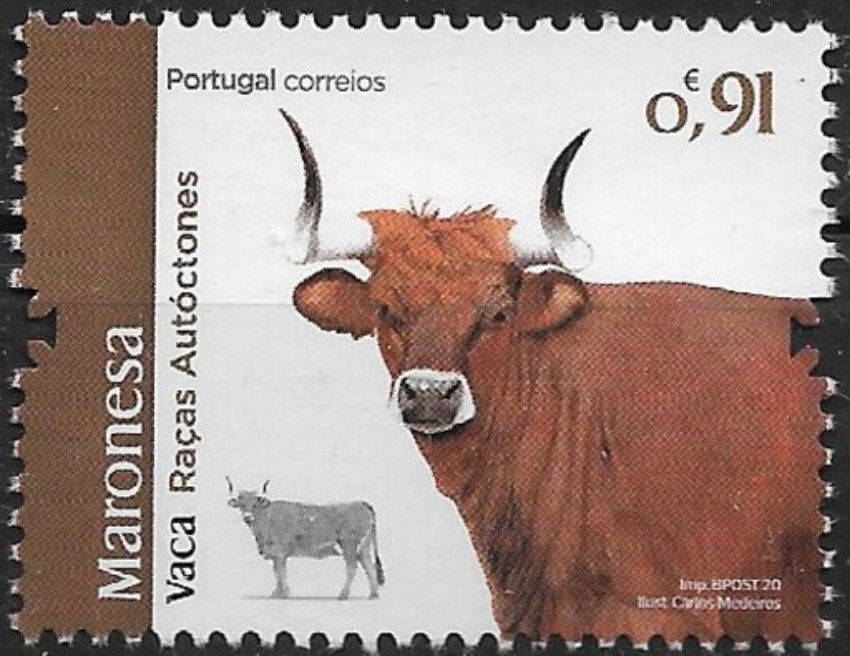 The Maronesa is a traditional Portuguese breed of mountain cattle. Its name derives from that of the Serra do Marão, which lies in the Trás-os-Montes and Douro Litoral regions in the northern part of the country. Its primary use is for draught power.

The origin of the Maronesa is not clear and remains controversial. Historical evidence suggests that it derives from cross-breeding of the Barrosã and Mirandesa breeds, and it was considered a cross-breed until about 1835, when it was acknowledged to be a separate breed. The Maronesa was formerly numerous in the provinces of Douro, Minho and Trás-os-Montes, and particularly in the Serra do Alvão, the Serra da Padrela, and the Serra do Marão. There is no census data from before 1940, when just over 25 000 head were counted; in 1955 there were 32 252 animals registered, and in 1972 there were 29 276. Numbers later dropped.

A breeders’ association was formed by fourteen breeders in 1988, and a breed register was started in the same year. By 1996 the number of farmers rearing the breed had risen to almost 1500. In 2008, the breed was officially approved by the Direção Geral de Veterinária, and the breed register became a genealogical herd-book.

In 2007, the FAO listed the conservation status of the Maronesa as “not at risk”. At the end of 2016 there were 4777 breeding cows registered in the herd-book; the total population was estimated at 8300–9900. Threats to the Maronesa include the falling number of keepers of the breed, their increasing mean age, and changes in the tax regulations. 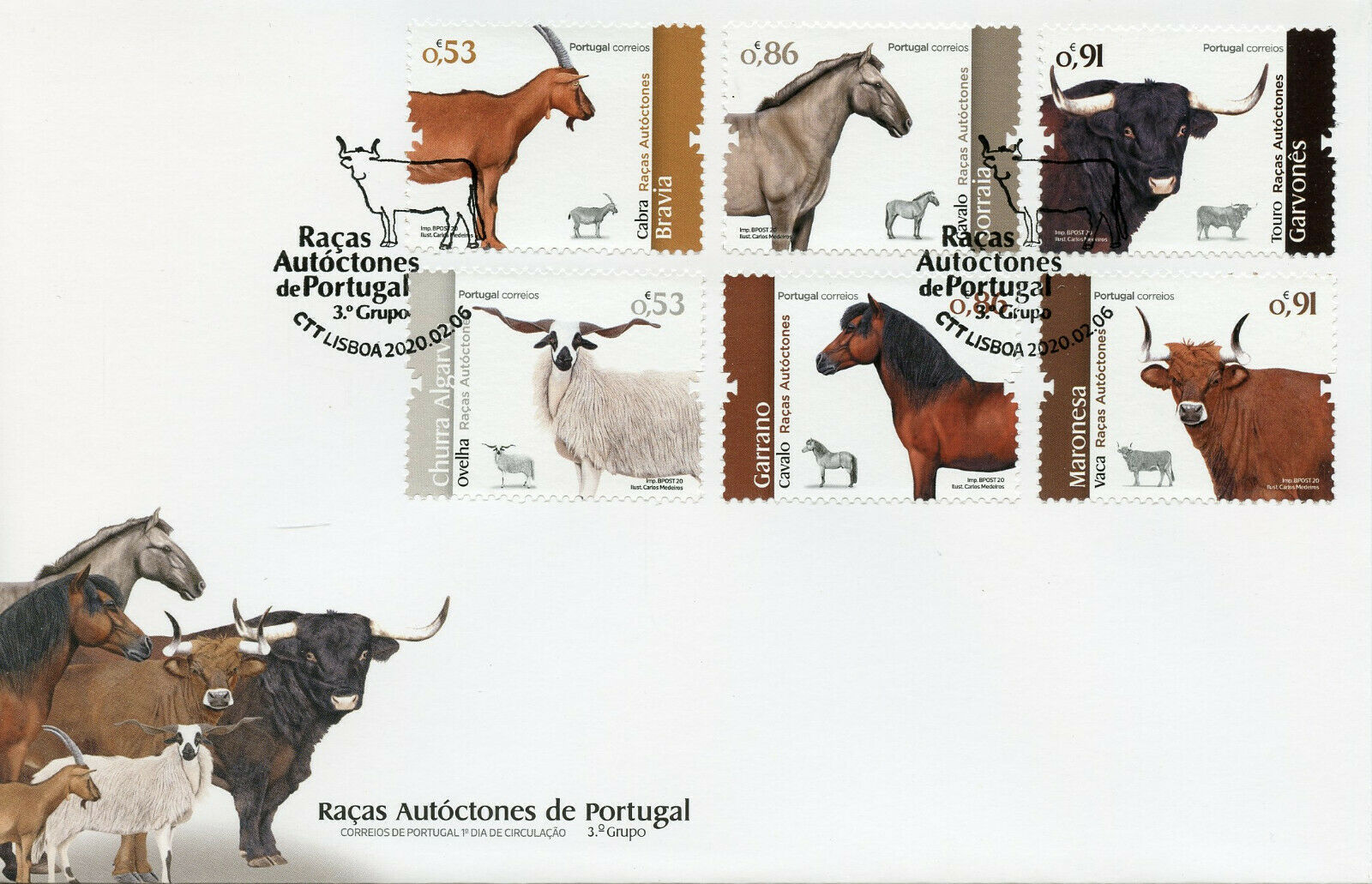 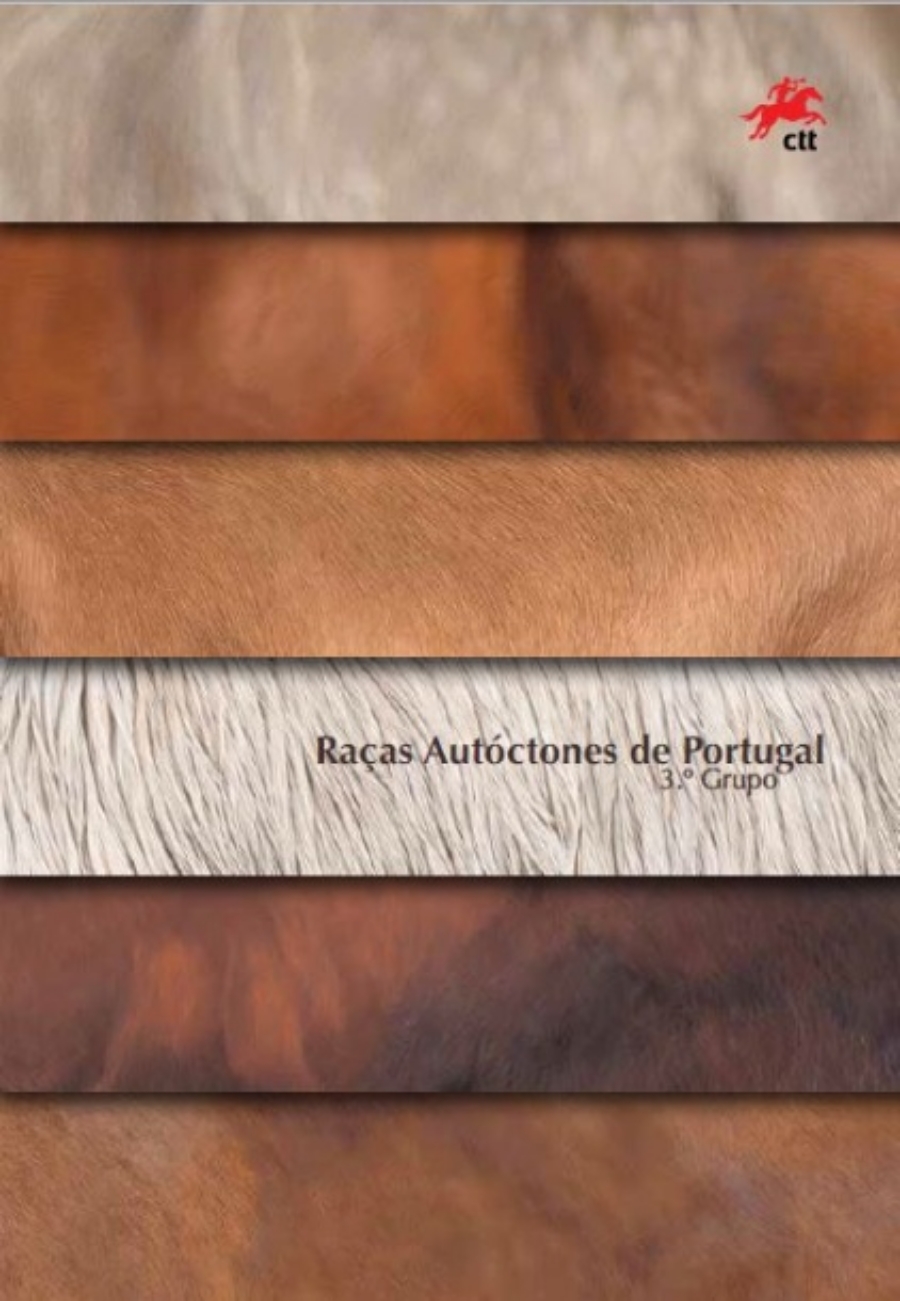 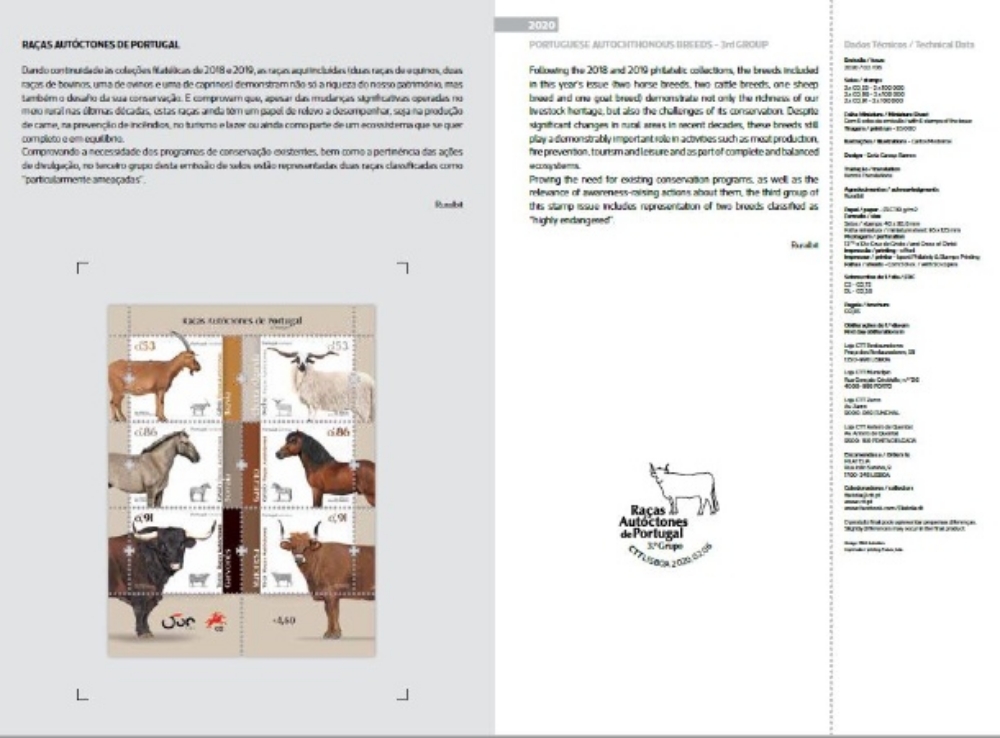