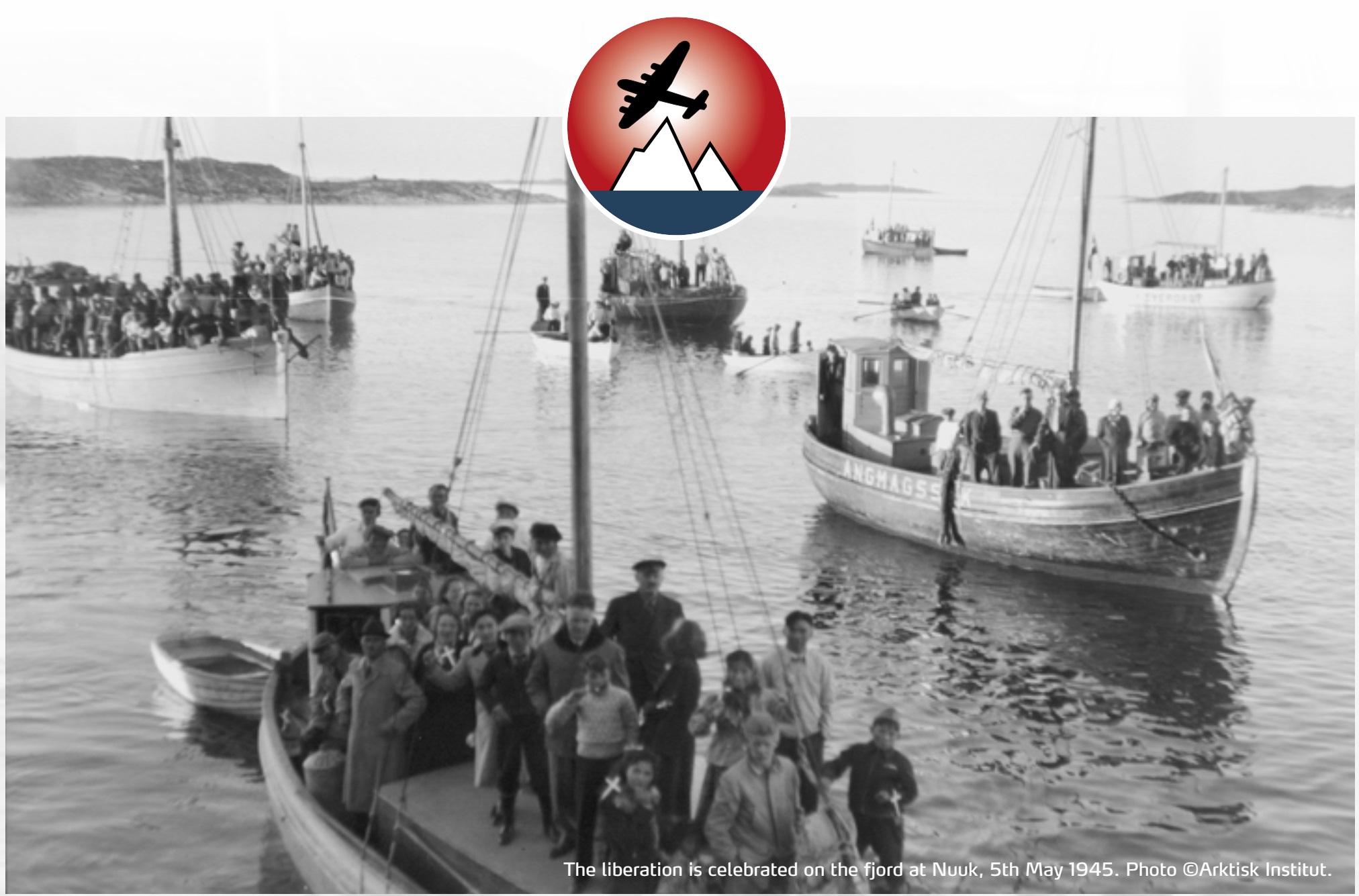 Greenland During the Second World War – As Seen by Greenlanders. Fifth and Final Part

This issue sees the conclusion of an important series of Greenlandic stamps. We have now reached the fifth and final part of ’Greenland during the Second World War – as seen by Greenlanders’. The final two stamps in the series will be issued on 18th May 2020.

All ten stamps in the series are printed as combined offset and laser etching. Naja Rosing-Asvid from Nuuk is the artist who produced all the designs in the series. Engraver and illustrator Martin Mörck undertook all the engraving work. All stamps in the series include photos from the war, while the hand-drawn sections are the fruit of Naja Rosing-Asvid’s own artistic expression. It has been very interesting to examine the historic material and to be involved in communicating this part of history to the readers of this magazine and to the people who collect our stamps.

We would like to extend our enormous thanks to Naja for all the amazing stamps she has designed for this series. She says that she has her basic knowledge of the subject through her work on designing exhibitions at the Greenland National Museum and her colleagues at the museum were helpful with information along the way. She also received first-hand descriptions from her mother, who was a child in Greenland during the war. In addition, Jens Heinrich’s PhD dissertation from 2010 ‘Eske Brun og det moderne Grønlands tilblivelse’ (Eske Brun and how modern Greenland came to be), was important source material. Also, both the National Museum of Greenland and the Arctic Institute in Copenhagen have made available the pictorial materials included in the series. Jens Heinrich’s dissertation was the source material for all of the articles we have published in previous issues of this magazine, when presenting the previous stamps from this stamp series. The paper was also the basis for the following account of the liberation and re-establishment of links between Greenland and Denmark after the end of the war. 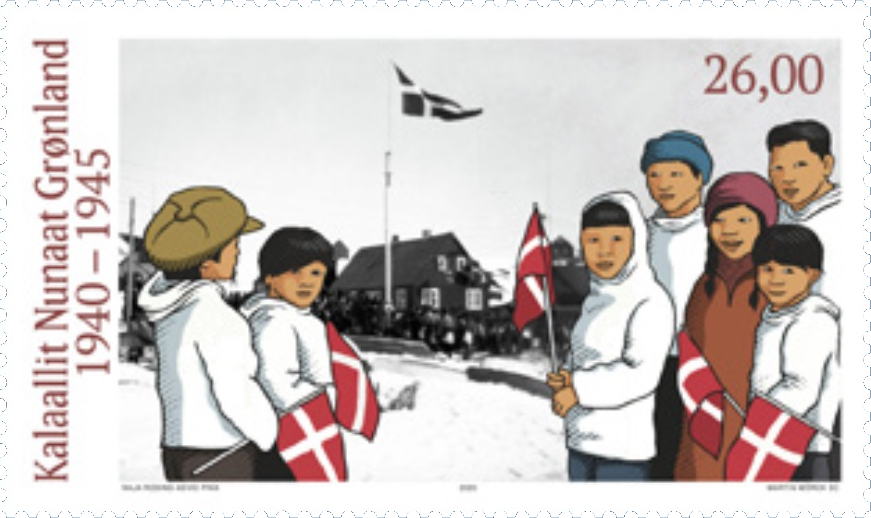 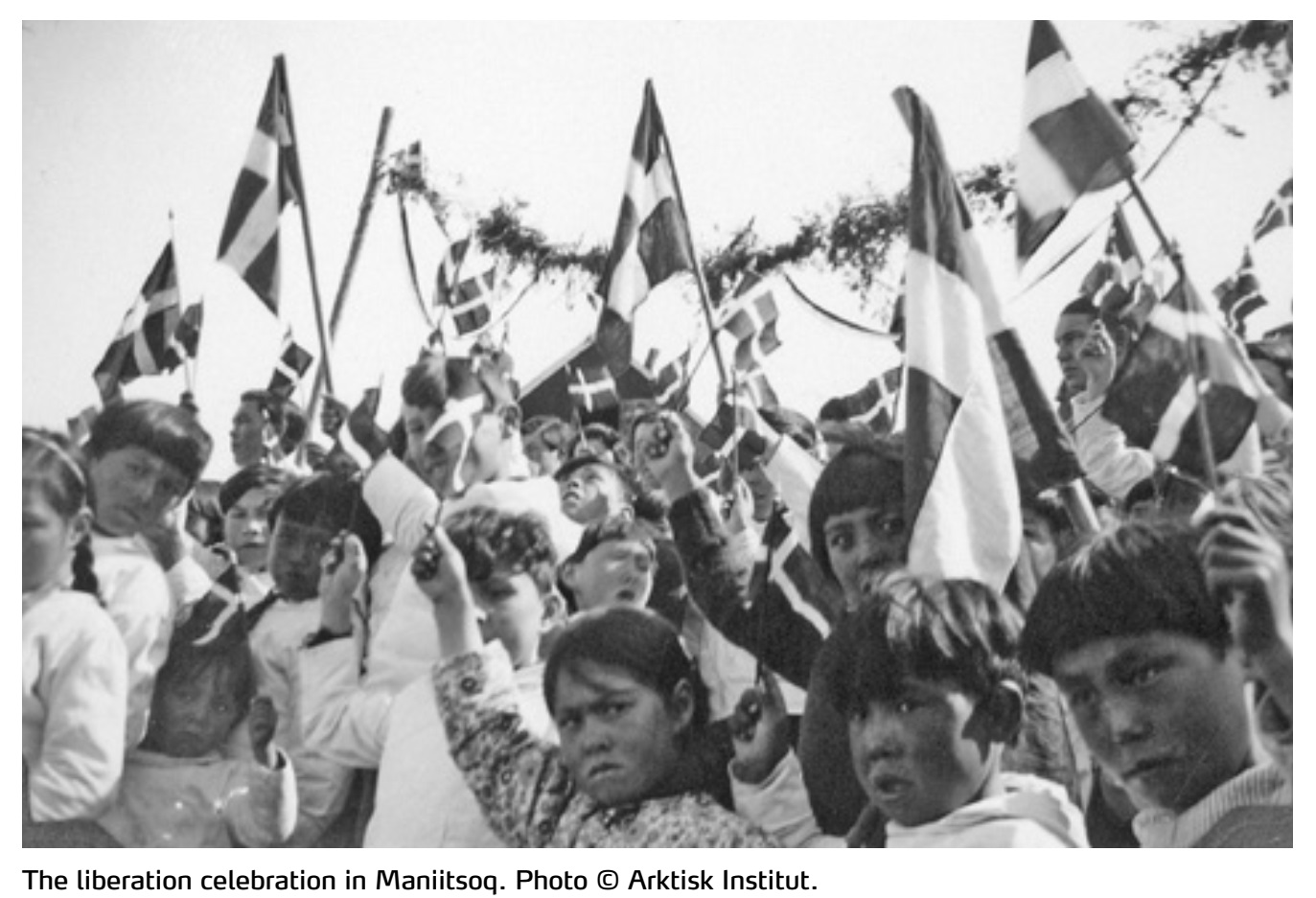 The Liberation
The war had strengthened the Greenlandic sense of loyalty towards Denmark. There is nothing to suggest that Greenlanders were particularly motivated towards independence from Denmark, neither during the war nor the years immediately afterwards. What was apparent from Greenland, however, was a desire for increased involvement in the decision-making process and greater equality with the Danes.

The most important wartime duties for national administrators Eske Brun and Aksel Svane had been to maintain Greenland, both with regard to the USA and, in part, with regard to Greenlandic confidence in Denmark’s ability to prevent Greenland from suffering shortages.

Building supply lines to and from the USA and, later on to and from Canada, required one of the national administrators to be located in the USA. Initially, Eske Brun was posted as leader of the Greenland delegation. He would, however, see himself largely outmanoeuvred by Henrik von Kauffmann, the Danish representative in Washington. Compared to Brun, Kauffmann was a bigger cog in a large machine.

Kauffmann was recognised as the independent Danish representative in autumn 1941, which meant that he outranked the national administrators from Greenland. Aksel Svane travelled to Washington later on where, against every expectation, he would spend the rest of the war as Kaufmann’s subordinate. This meant that Eske Brun was the only remaining national administrator in Greenland for the remainder of the war. Here, he would be the big cog in a small machine. According to Eske Brun, the guiding principles would be continued during the war, but:

“I still felt that I had plenty of freedom with regard to how I dealt with more detailed issues when the extraordinary situation required unorthodox solutions, but stubbornly pursued the same objective, which was to return home and be able to truthfully say that nothing happened to interrupt Danish work projects in Greenland that would prevent their resumption from where they were left in 1940.” 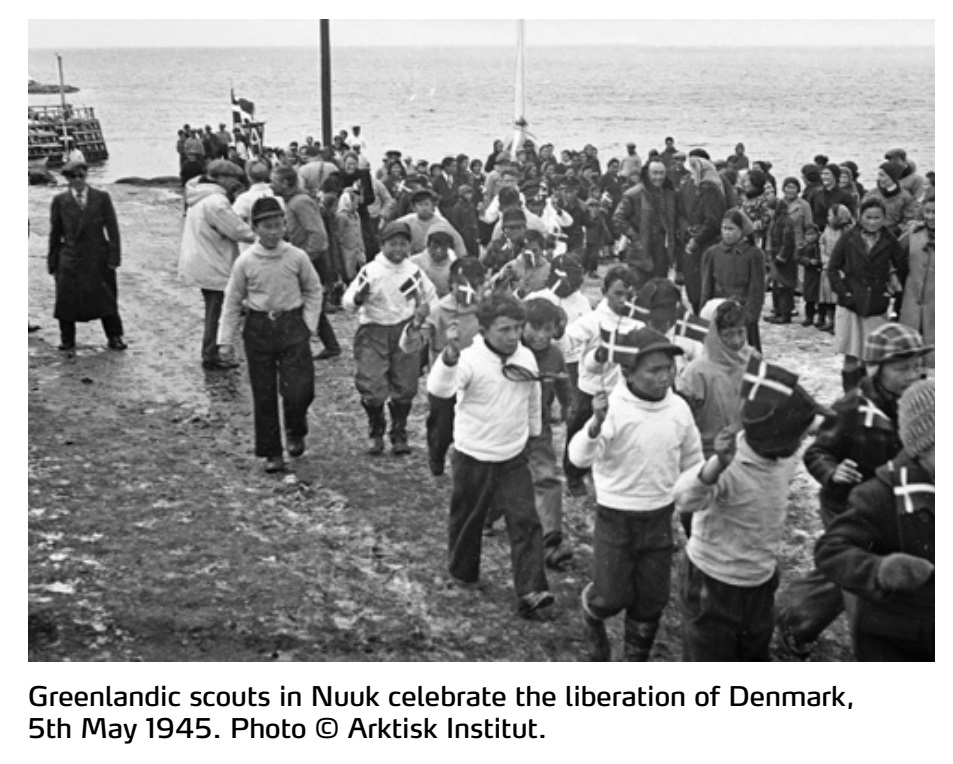 One example of Brun’s decision to make autonomous decisions was the 15% pay rise that was awarded to salaried employees in Greenland in 1942. This pay rise was justified because of the increased wartime living costs.
The founding of the weekly periodical ‘Grønlandsposten’, broadcasting services, the centralised administration and the national councils, changes to the supply system and, finally, the North East Greenland Sled Patrol can all be considered significant changes to former practices. These could all be categorised as “necessitated by the extraordinary situation”.

The result was that Greenland had throughout the Second World War worked against the Axis Powers and, thus, contributed to Denmark’s liberation. In addition, since Greenland was made available to the USA, this was considered a Danish contribution to the Allied war effort too.

When he arrived back in Denmark, Brun told the Politiken daily newspaper that Greenland had not suffered shortages during the war, but that it had been upsetting to hear all the terrible news from Denmark. Greenland was, therefore, very happy that Denmark was free once again. A few days later it was also confirmed in the Social-Demokraten daily paper that:

“Greenlanders, despite having been distanced for so long from Denmark, had a greater sense of attachment to Denmark than ever before.” 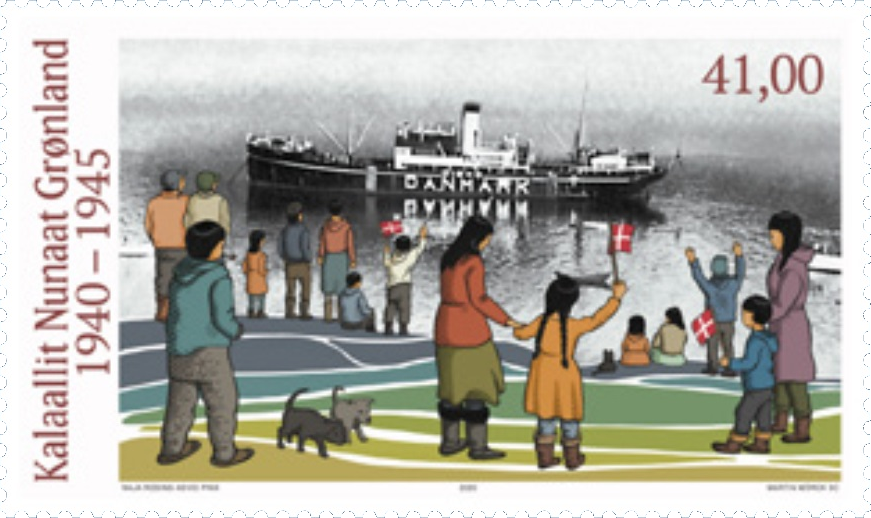 Links are Re-Established
There was plenty of joy and optimism among the Greenlandic population that links had been restored between Denmark and Greenland. For the entire duration of the war, Greenland had seen developments that were due to the extraordinary conditions and had proved itself to be ready to take on every new challenge that was presented.

Brun’s two reports from 1945 recommended a thorough investigation of policy for Greenland, but no radical reforms and, for example, no recommendation that a commission should be set up. Both Greenland National Councils did not want to see radical changes either but was unambiguous when it expressed that policy changes should be the result of a commission. Brun participated in some of the meetings that were conducted during the negotiations at the beginning of 1946, but to the disappointment of some of the Greenlandic delegates he did not support radical changes to current policy. The 1946 considerations expressed a cautious course of action, the idea being that policy would be reviewed within five years. 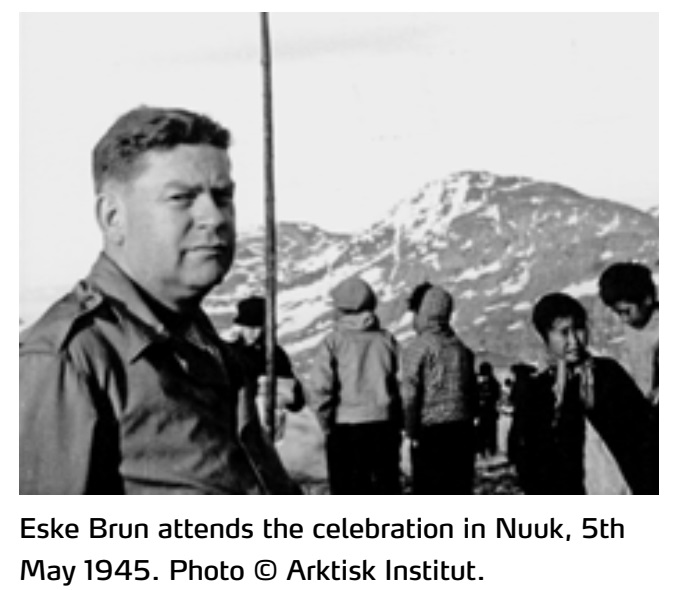 Greenland became an increasingly important negotiating piece for Denmark, with regard to the rest of the world. The USA was highly motivated towards maintaining a continued presence in Greenland, which would eventually become apparent to Denmark. Greenland was, thus, a high-value card in Denmark’s hand with regard to NATO and related security guarantees. 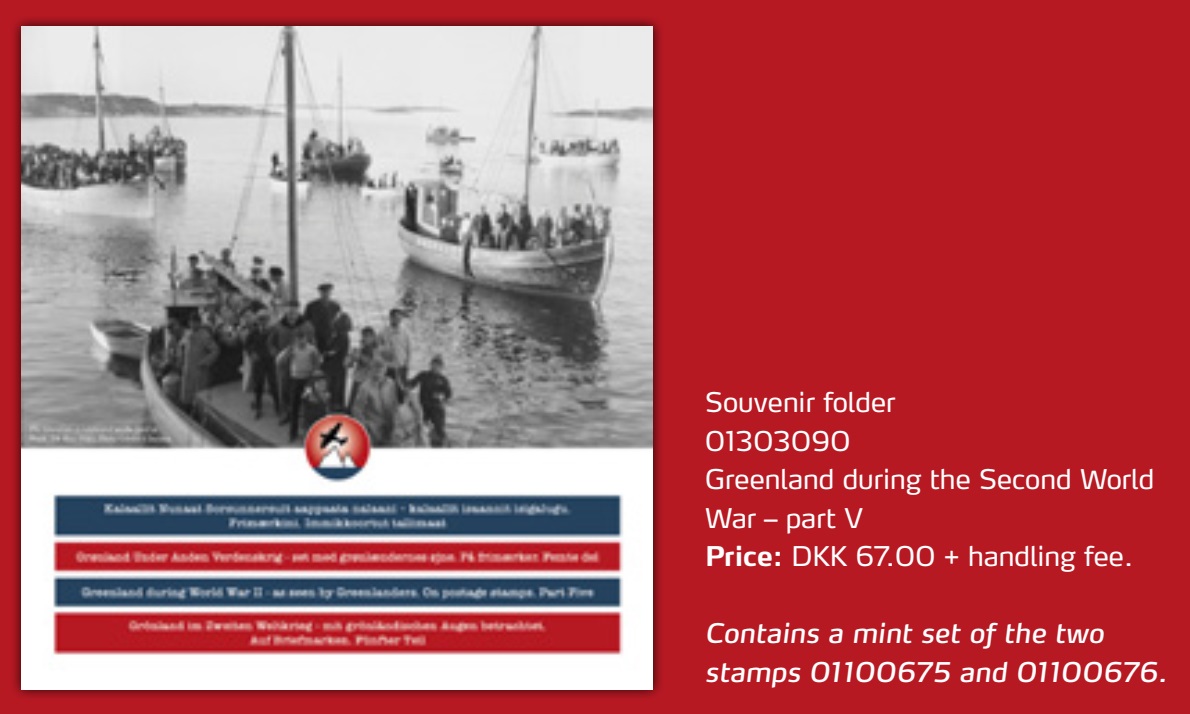 About the Artist
Naja Rosing-Asvid is a qualified architect and has spent the last twelve years working as an artist, exhibition designer, children’s author, scenographer and plenty of other things. Her art exploits various forms of expression, experimenting with materials such as waste fragments and natural materials. See some of her works here www.NajaRosingAsvid.dk. 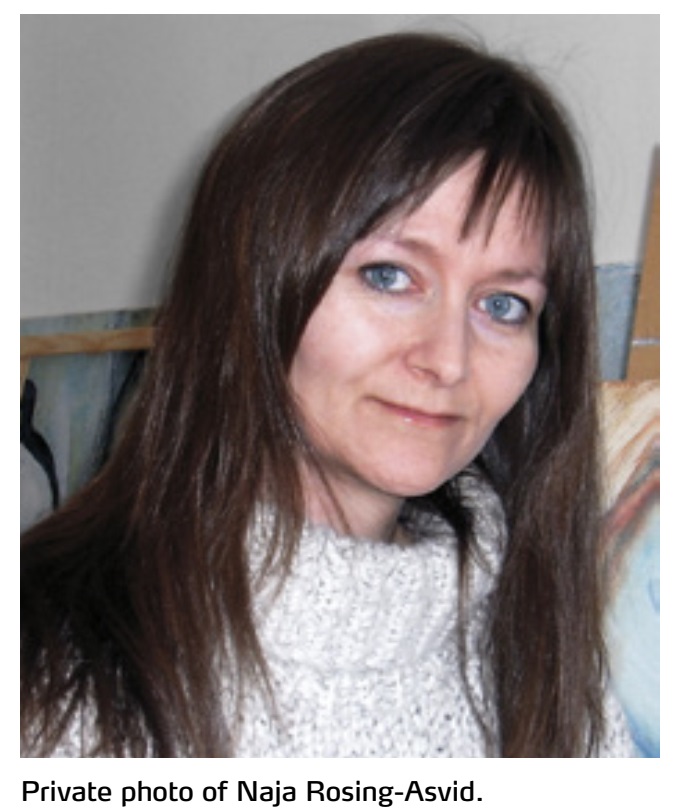 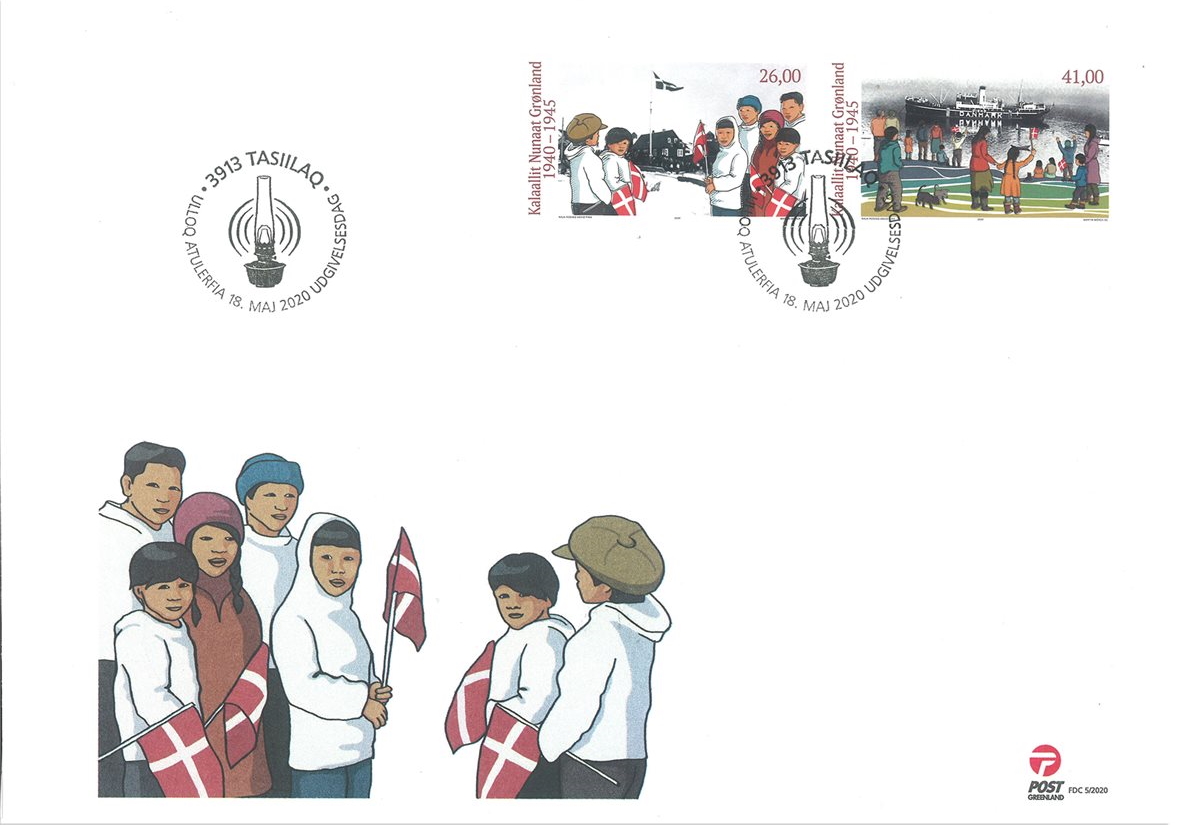 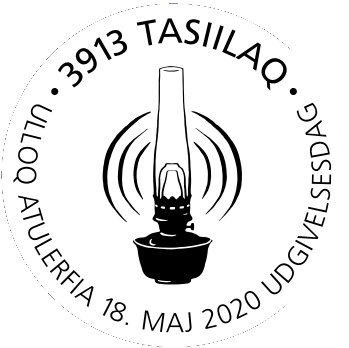