75th Jubilee of the American Issue

The very first Greenlandic stamps were printed in Denmark and issued in Greenland in 1938. These stamps were, therefore, in use in Greenland when the Second World War broke out the following year.

Greenland’s links to Denmark were severed when Denmark was occupied by Germany on 9th April 1940, as all Danish territory was considered hostile territory by the Allies. All supply lines to Greenland were, therefore, blocked – including by ship.

By 1943, various stamp denominations were becoming scarce in Greenland. In addition, higher values were required for airmail post. Work began to supply Greenland with new postage stamps. This work continued until the stamps were issued in 1945.

‘The American Issue’ covers the nine stamps that were issued in Greenland in February 1945 when the Second World War had entered its final phase. Unlike all other Greenlandic stamps from this period, the American Issue was printed in the USA instead of in Denmark. Hence the name.

The American Issue is very popular with collectors to this day, with increased demand for historic rarities. We have already written about this here in the magazine. Danish collector Flemming Petersen gave us a very interesting account in the Greenland Collector, February 2002 edition. One of the things he mentioned was the then-recent discovery of the first draft of the American Issue in the Danish National Archives in Copenhagen. 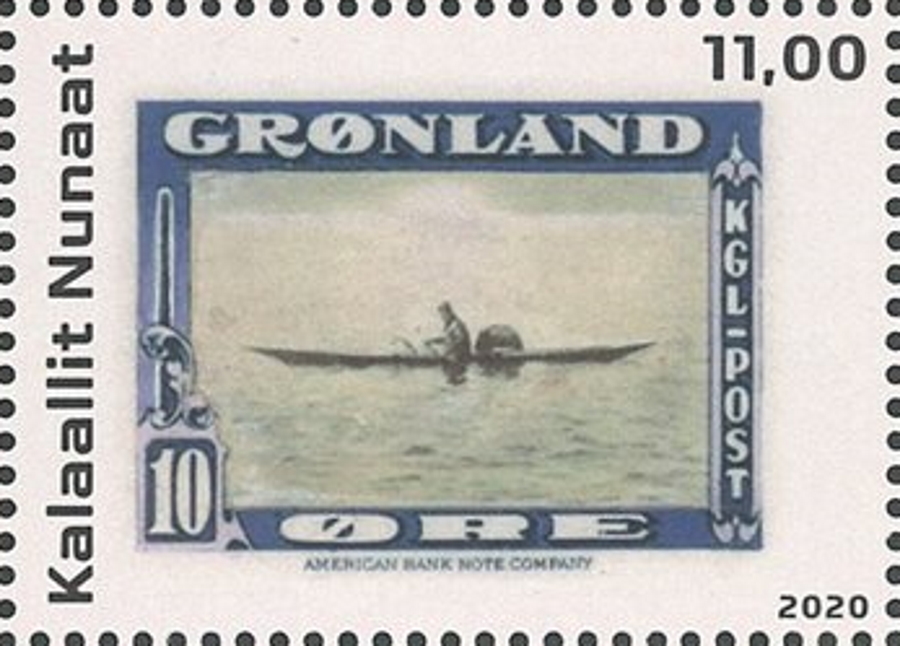 The American Issue – Background
The USA officially entered the Second World War after the Japanese attack on Pearl Harbor on 7th December 1941 and all post from the USA to Denmark stopped.

The population of Greenland would, however, receive all its supplies of food and consumer goods from the USA and eventually Canada, from the date of the German occupation onwards. This situation has also been described and depicted in the ‘Greenland during the Second World War – as seen by Greenlanders’ series of stamps to be issued on 18 May 2020.

One matter that was not presented in that series was Greenland’s need for postage and new stamps as the war drew to an end. The American Issue should be seen from this perspective.

What makes the American Issue particularly interesting is the process from and including 1943 onwards, when it was recognised that there was a need for new Greenlandic postage stamps, to their design – negotiated over a copious mail correspondence between Greendel (the Greenland office at the Danish General
Consulate in New York) and the USA – and their eventual printing and issue in Greenland in 1945 (also being sold from the USA to its allies and neutral countries), to finally being used as postage in Greenland, eventually attracting attention from both broader and newer collector circles. 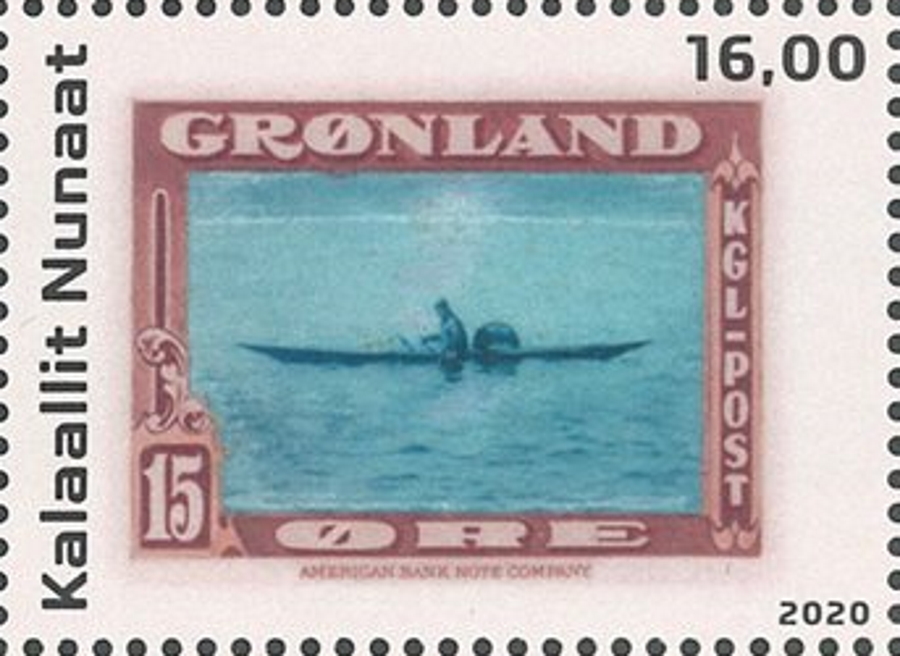 How it Came to Be
A letter dated 20th November 1943 sent by Eske Brun, Greenland’s national administrator, to the American Bank Note Company in New York stated that a new series of postage stamps was required and enclosed the following proposals for stamp designs and franking values.

Enclosed were original photographs and a few books from which the American Bank Note Company could find images that would be suitable to use on the stamps. A memo of 19th April 1944 shows that the initial designs
had been altered slightly. A few of the artworks were altered before the stamps’ layout was finalised and they were printed and issued. The initial artworks of 10th May 1944 show, for example:

Two samples of the first artworks for the nine American Issue stamps were sent to the Greendel representation for approval, addressed to Director G. Blackmore. 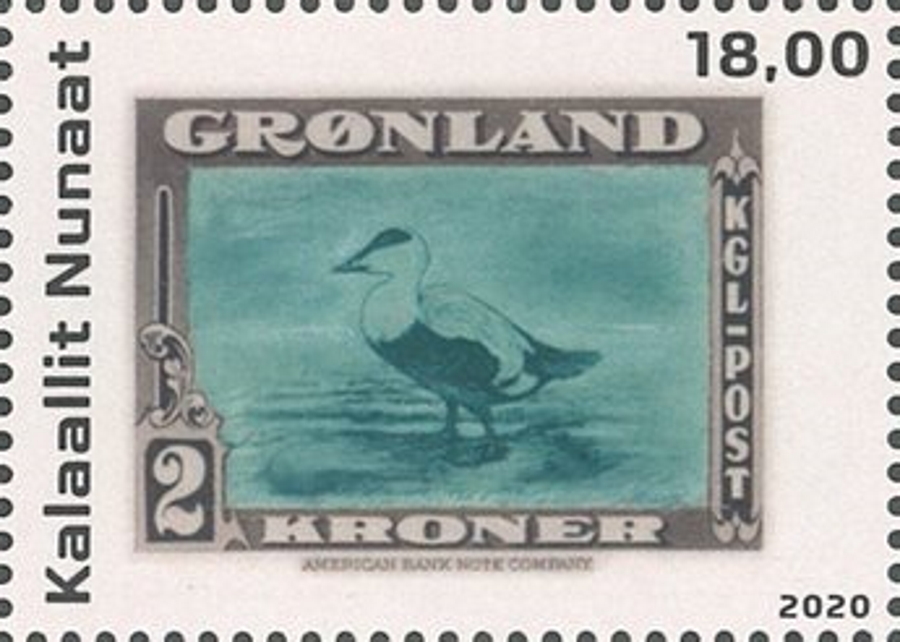 Director Tage Nielsen commented to the American Bank Note Company about the first artworks, pointing out that some of the dogs in the dog harness appeared to be running loose. Changes were also requested to the 10 and 15 øre and 2 kroner values and a popular original picture of King Christian X on horseback was supplied, the kayak design now being used for the 2 kroner value. The changes at this point were thus:

The 10 and 15 øre and 2 kroner values thus ended up being printed with other stamp designs than those that were originally planned.

First and Second Period of Use
After printing, the nine stamps were both sold from New York and sailed to Greenland, where they were issued on 1st February 1945. The stamps were then available for purchase in Greenland and from the Greenland office of the Danish consulate in New York. The earliest post from Greenland franked with the American Issue are known to be from February 1945, when it was possible to send mail to allied and neutral countries via the USA.

Danish collectors became very interested in the American Issue after the end of the Second World War. This was because many collectors in neutral Sweden had acquired these stamps. KGH, the Royal Greenlandic Trading Company, stopped selling the stamps in Greenland, after which all stamp supplies were to be returned to Copenhagen. The normal period of use of the American Issue in Greenland was, therefore, very brief. Ordinary letters from 1945 exist only in very limited numbers. 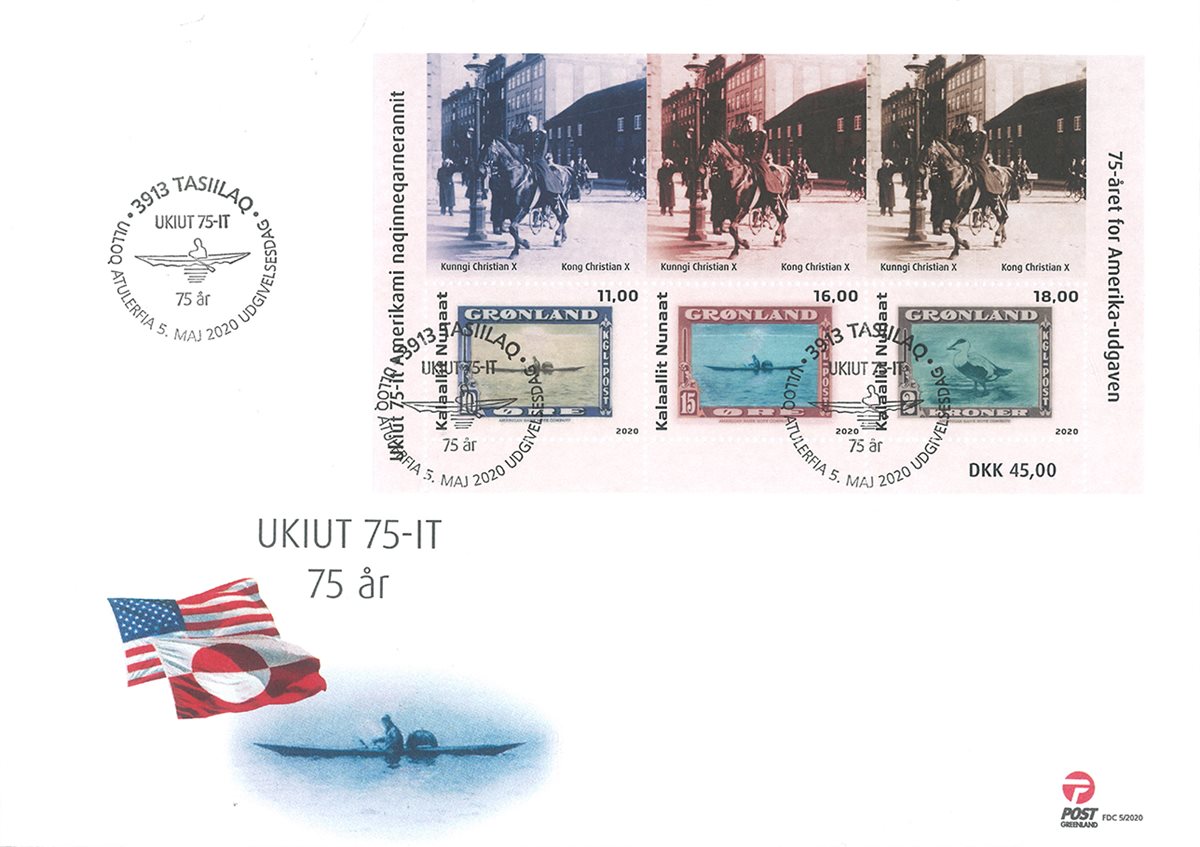 The first period of use is, therefore, calculated as being from February 1945 until the first ship of the following year sailed from Greenland to Copenhagen in the spring of 1946, when Danish collectors had been well-supplied with these stamps that were now being sent to Greenland for postmarking.

After the February and March 1946 sales in Copenhagen, during which the American Issue was sold to dealers and collectors, there was an excess of the 1, 2 and 5 kroner value stamps. These would eventually be used in Greenland, where the 1 krone stamp did not sell out until about 1950 and the 2 and 5 kroner stamps were still in use as late as in 1962. This period can be called the second period of use for these three values. Addressed letters etc. from this period have also become interesting collectors’ items.

Other Variants of the American Issue
The American Bank Note Company would later be declared bankrupt and some of the historical material would be subsequently sold at auction.

Other matters related to the American Issue that were not covered by this article include the American Issue with ‘Denmark liberated on 5th May 1945’ overprint, a specimen issue that was not sent to UPU countries because of the war, and the so-called ‘mother plate impression’, which first appeared in 1950. The ‘American Issue’ therefore has many facets that are of interest to collectors and others.

Souvenir Sheet ‘75th Jubilee of the American Issue’
Our ’75th anniversary souvenir sheet’ includes the three original images for the 10 and 15 øre and 2 kroner value stamps, with new upto-date denominations of DKK 11, 16 and 18 respectively.

The total price for the souvenir sheet is DKK 45, corresponding to the total face value of the three stamps. 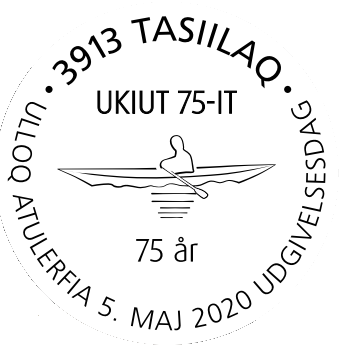