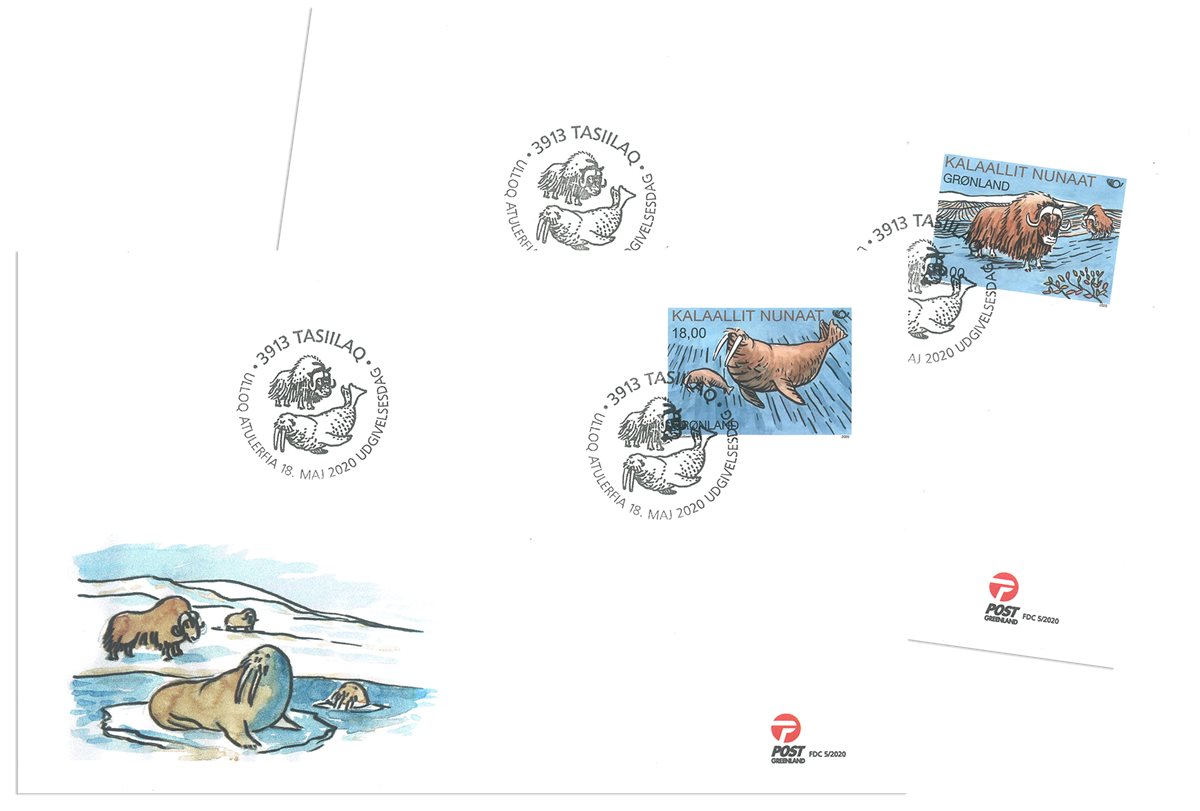 This is the final occasion upon which we shall be issuing stamps in the joint Nordic ‘Norden’ series. The decision that this year’s Nordic stamps will be the last was reached by unanimous agreement among all eight Nordic postal administrations.

Over the years, we have seen many notable joint Nordic stamp issues of which we have been very proud. The theme for our 2020 Nordic stamps is ‘Mammals’ and you should expect to see some very attractive stamps in this joint Nordic issue. These stamps will form an attractive final curtain for the Nordic series, which will then become an historical collector area.

Mammals in Greenland
Aficionados of Greenlandic stamps will already be aware that POST Greenland has depicted numerous different animals on our stamps – and mammals in particular – since the very first Greenlandic stamps were issued in 1938. Selecting the two species to depict on these two Nordic stamps, therefore, meant having to limit our options. We ended up choosing one significant land animal and one significant sea mammal that have not been depicted on our stamps very often.

POST Greenland’s final two stamps in the Nordic series will be issued on 18th May 2020. They are the creation of multi-artist Miki Jacobsen. His heavy yet intricate linework has truly captured the raw power of the two Greenlandic mammals he has depicted. 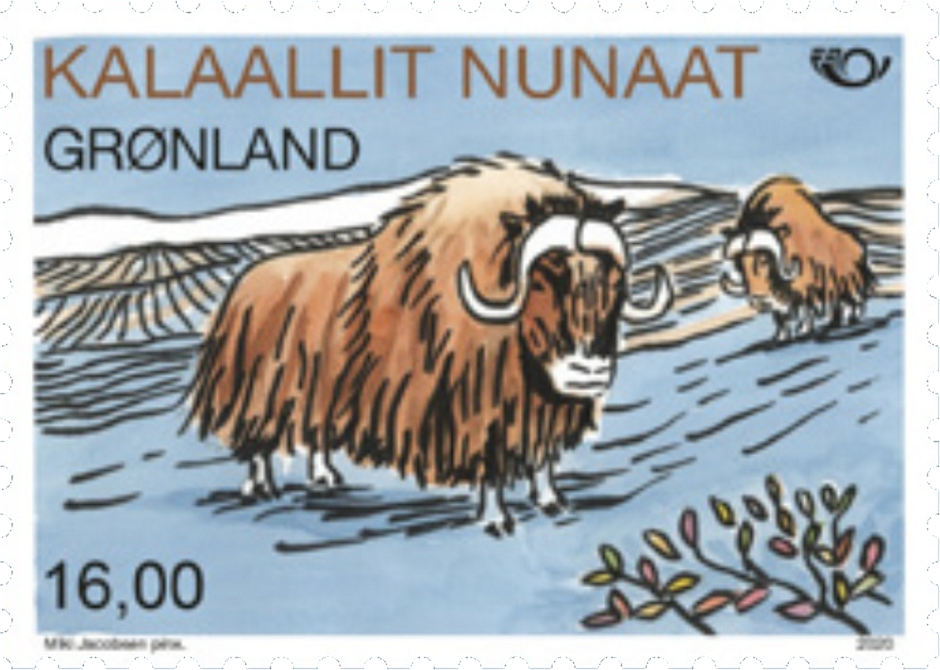 Musk Oxen
Musk oxen are best known for their horns and shaggy pelt, which is composed of a thick, grey inner wool and thick brown outer hair. They have fur and a snout resembling a sheep, but their horns are those of an ox.

Males’ horns are thick and have grown together at the brow. Musk oxen have lighter-coloured fur on the back and a hump above their shoulders. They are closely related to the goat-like goral, which lives in Asia.

Their natural habitat is in North and Northeast Greenland but they have also been introduced to various parts of West Greenland. Musk oxen normally live in herds and can be dangerous to approach.

Musk oxen are bovines. They feed on grass, shrubs, lichens and mosses as well as Arctic willow and other woody shoots. 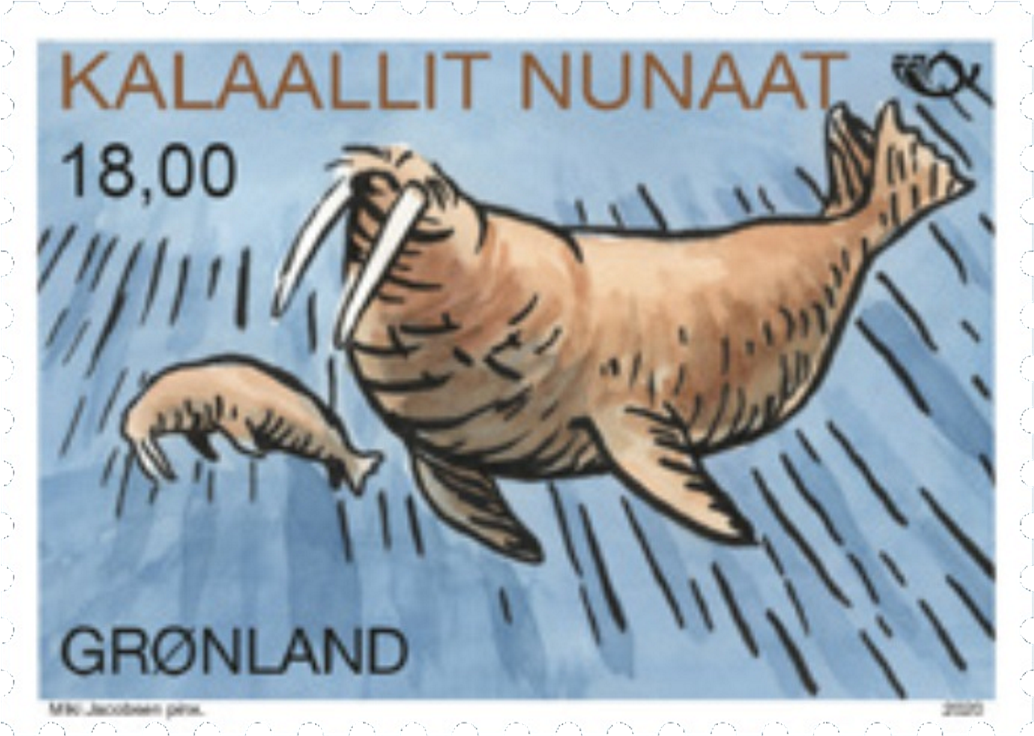 Walrusses
The walrus is a species of seal with a large, broad front body and neck and a small flat-snouted head with tusks up to 50 cm in length. Males are largest and often have scars and lumps on their front section, the result of violent pre-mating fights.

Walruses live near the coast or polynyas, i.e. areas of open water surrounded by sea ice. The walrus population of East Greenland has permanent resting places on land. Walruses live in herds and communicate with each other. 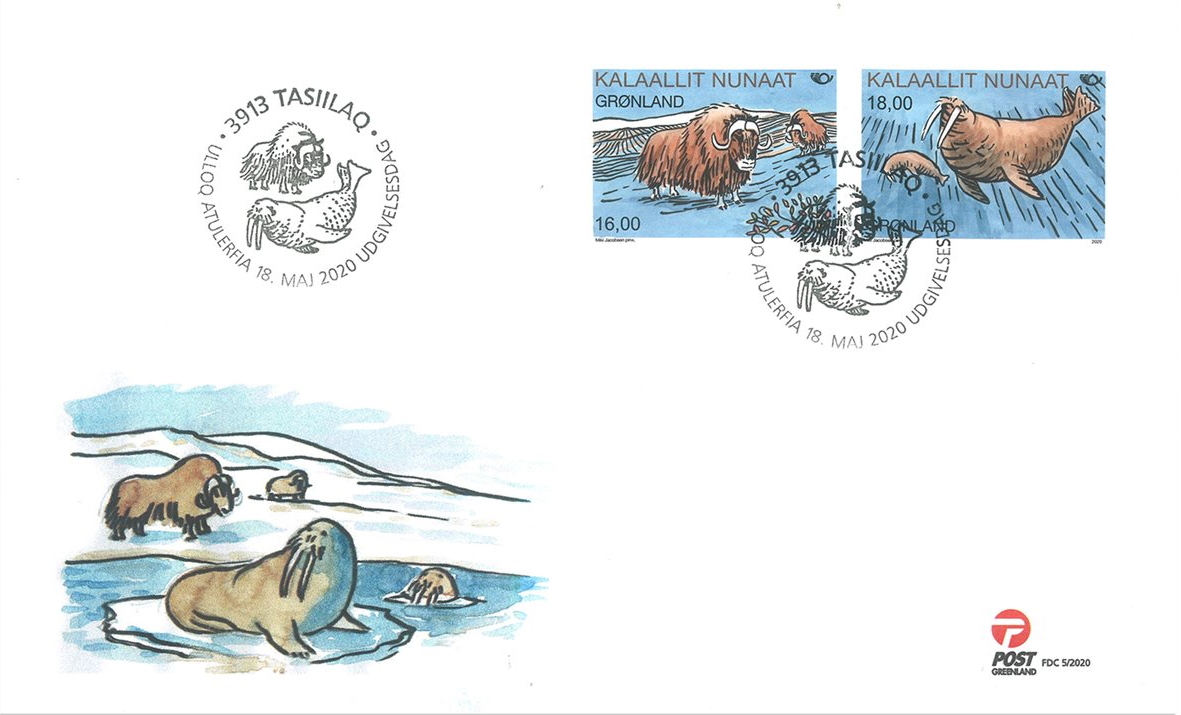 About the Artist
Miki Jacobsen was born in Paamiut in 1965. He has illustrated several children’s books and has exhibited in locations which include Greenland, Scandinavia, Ireland, the USA and Canada. He has also attended residential art courses at: Greenland’s School of Art, the Danish Design School and Nova Scotia College of Art and Design in Halifax.

Miki Jacobsen is skilled in several different techniques and means of expression, which he usually combines in his projects: painting, graphics, photography, computer graphics, sound and performance. Miki Jacobsen has been designing stamps since 1992. These two stamps are the 27th and 28th he has designed for POST Greenland. 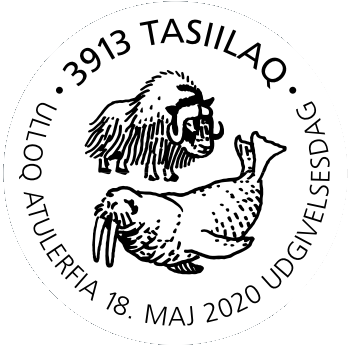