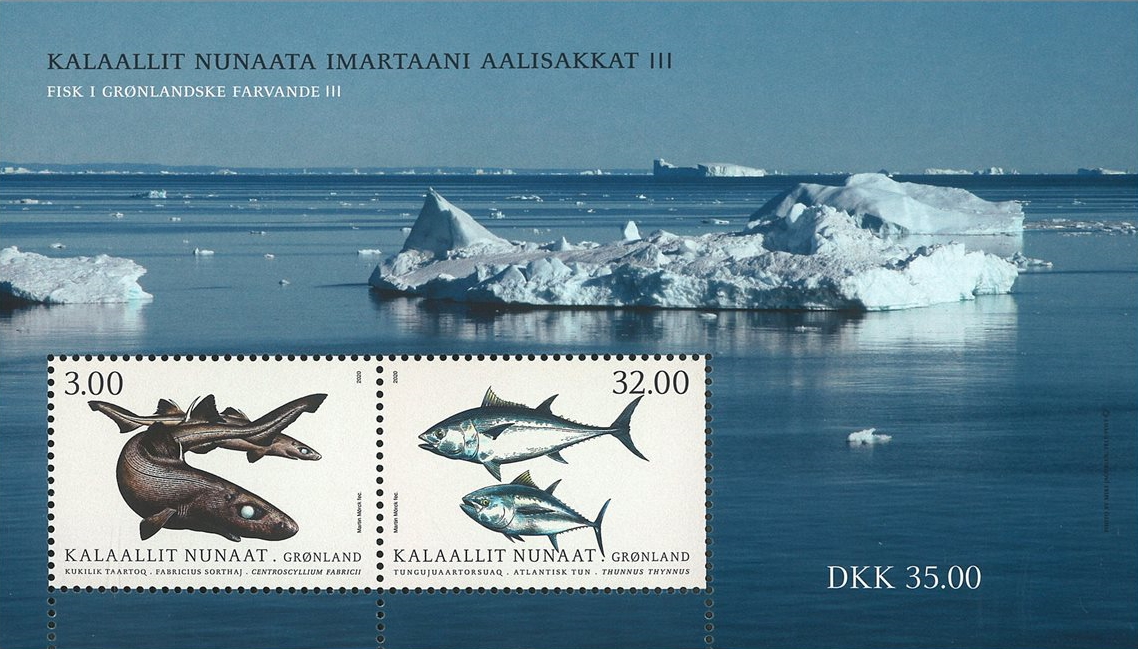 There are over 260 species of fish in Greenlandic waters. It was, therefore, a challenge to come up with a shortlist of only ten species for depiction in this series of stamps. This task entailed using the best available advice and expertise. The ten fish in our fish series were selected in collaboration with Pinngortitaleriffik – the Greenlandic Institute of Nature, in Nuuk.

Our fish series provides the opportunity for a greater insight into the fish that are of cultural and commercial importance to Greenland. Legendary Martin Mörck is the artist who drew all the stamps in the series. He found inspiration for the fish designs from his youth, where he worked with fish, both at sea and ashore. Martin’s many visits to Greenland spanning two decades, with countless boat trips, hunting and fishing both summer and winter, have strengthened his understanding of Greenland’s marvellous fauna.

The two species that are depicted on the two new fish stamps are black dogfish and Atlantic tuna.

Black dogfish live by the east coast of Canada, Baffin Island, Southern Greenland, Iceland and further south in the waters of Ireland and southern Norway. Near Greenland, black dogfish live at depths of 500 to 1,300 metres, both near the seabed and in open bodies of water.

Black dogfish are dark brown or black, with a spine in front of each dorsal fin. They can be up to a metre in length but are normally 60 – 80 cm long. Black dogfish have large, oval eyes and small, blunt ventral fins. Their teeth also have 3 – 5 tips. Black dogfish live on fish, cephalopods and crustaceans.

Atlantic tuna or bluefin tuna are the largest species of tuna. They can be over three metres in length and weigh up to 700 kg. Atlantic tuna is a migratory fish that lives in large areas of the Atlantic. Historically, Atlantic tuna are frequent visitors in Scandinavian waters, where they were previously fished extensively. 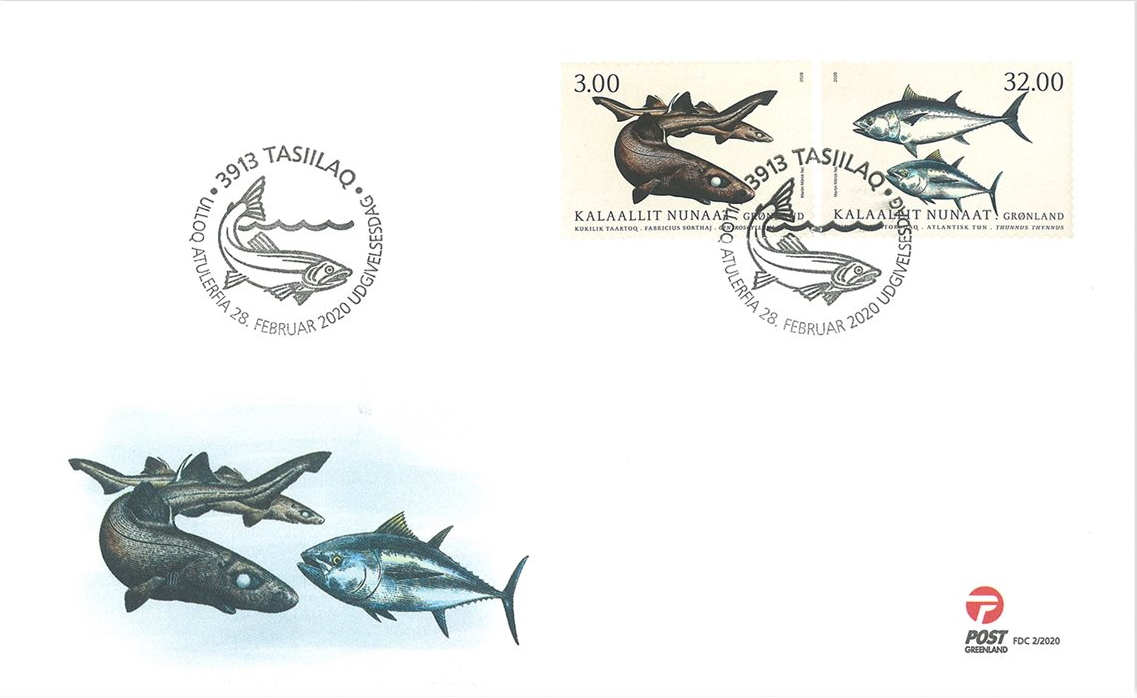 It may not just be the warmer seawater that has attracted this big fish to Greenland, but rather the fact that the Greenlandic ‘menu’ has changed and is suddenly more appealing to the tuna palate. As professor at the Technical University of Denmark, Brian MacKenzie, puts it, there may be a cascade effect, where the warmer seawater attracts mackerel to Greenland and the mackerel then attract tuna further north.

“Until 2009, there were almost no mackerel near Iceland and none near Greenland. Mackerel have moved in the last few years, however, and are now found off East Greenland.”

Martin Mörck, born 1955 in Gothenburg, is an artist and engraver of stamps, banknotes and portraits. His native language is Swedish, but he is actually a Norwegian citizen. After studying shipbuilding and art, he began an apprenticeship as an engraver in 1975. Since then, he has had over 600 of his engravings issued on postage stamps, mainly for postal services in the Nordic countries, but also for countries such as France, Monaco and Canada, China and the USA. Since his first stamp for Greenland in 1995, Martin Mörck has created the designs for and has engraved over 100 postage stamps for POST Greenland. 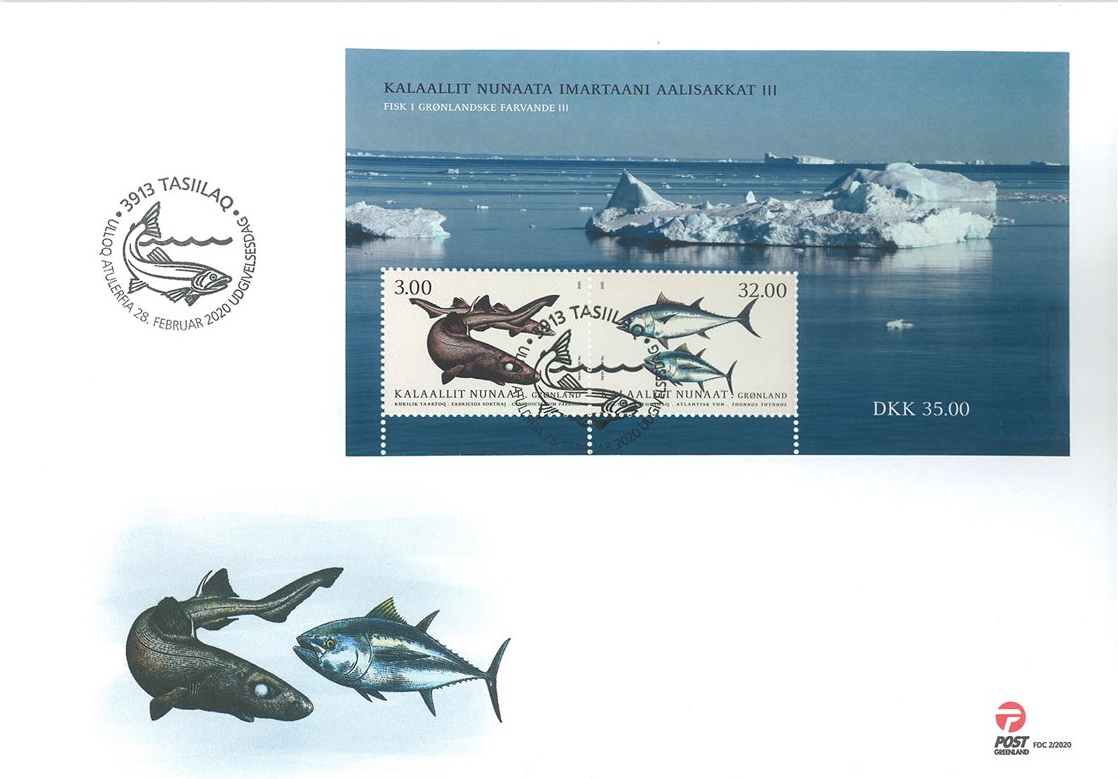 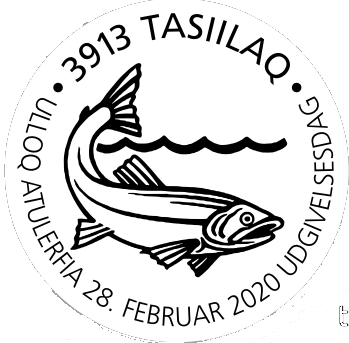