Issue date: 04/04/2020
Author: Klapp.ad (Marta Farrés – Roger Cortés)
Number of stamps per sheet: 20
Offset printing technique
Dimensions: 30 X 40.85
It was Jean Loiseau who initiated the creation of GR® trails. Passionate about walking and nature, he traveled the roads of France and Europe, compass and map in hand for ten years after the First World War, a passion that he wanted to share at the onset of holidays paid in 1936. Today there are 343 GR® trails, maintained by more than 20,000 volunteers. The GR®7 is part of the European E-4 route, connecting Cyprus to Morocco, notably through France, Andorra and Spain. In France he started in the Vosges mountains, at the Ballon d’Alsace. The last 100 kilometers cross the regional natural park of the Catalan Pyrenees and the Cathar country, up to Andorra la Vella where it ends after having taken the Madriu-Perafita-Claror valley.

This stamp is only valid from the Principality of Andorra.

The Customer is informed that he has a legal period of 14 days from the date of receipt of his order to retract by contacting customer service through the “Help and Contact” section on the Site or by sending the form of withdrawal appearing in appendix 1 of the CGV by post:
Internet Customer Service – The Boutique – 99 999 La Poste Cedex 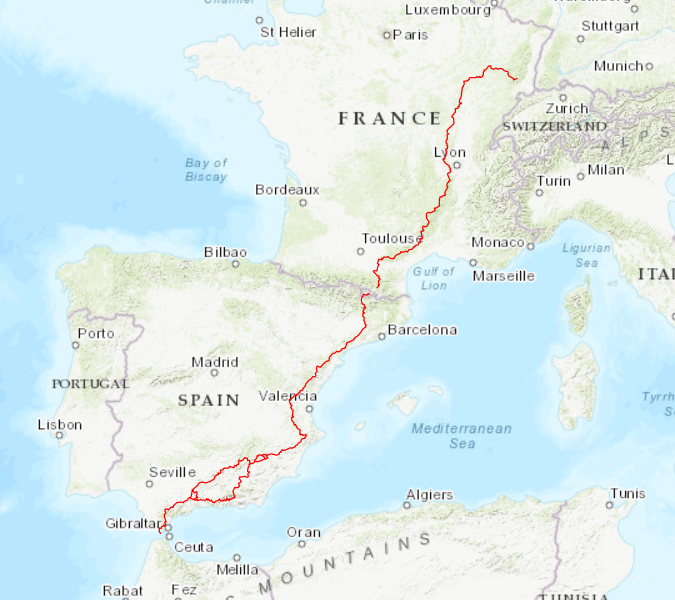 The GR 7 is a long-distance footpath in Spain, Andorra and France. It is part of both the Spanish network of Senderos de Gran Recorrido and the French network of Sentiers de Grandes Randonnées. Part of GR 7 forms the south-westernmost part of the European walking route E4 in Spain. GR 7 runs from Tarifa, near Gibraltar, across Spain, through France into Andorra, and back into France to Mont Aigoual and Aire-de-Côte in the Cevennes. GR 7 continues north from the Cevennes mountains and the final 250 km end on the top of the Ballon d’Alsace, Alsace, northern France; here it meets E5.

The Spanish GR 7 is 1900 km long. It was the first long-distance footpath to be marked out in Spain, and was initiated in 1974. It runs up the east side of peninsular Spain, but at some distance from the coast. From south-west to north-east, it runs through the Spanish regions of:

Like all the Gran Recorrido paths, the GR 7 is marked with red and white waymarks. These waymarks, at least on some segments of the trail, are few and faded.

There is a choice of two routes around the Spanish Sierra Nevada, one to the north of the mountains, and one to the south below. The Southern Route through the Alpujarra foothills is popular, linking numerous small Spanish villages.

The French part of GR 7 is 1400 km long. From Andorra, the GR 7 continues in France, through the Cevennes to Mont Aigoual and Aire-de-Côte, and then north to Alsace.

GR 7 appears to coincide with European walking route E7 in northern Spain, in Andorra, and in France as far as the Cevenne. From the Cevenne the European walking route E7 continues south along GR6,] through the South of France, Italy, Slovenia, and Hungary. It will eventually end in Romania, so as to create a route that will reach from the Atlantic (Lisbon, Portugal) to the Black Sea; however, some stages, including parts of the route through Italy, are still in planning.