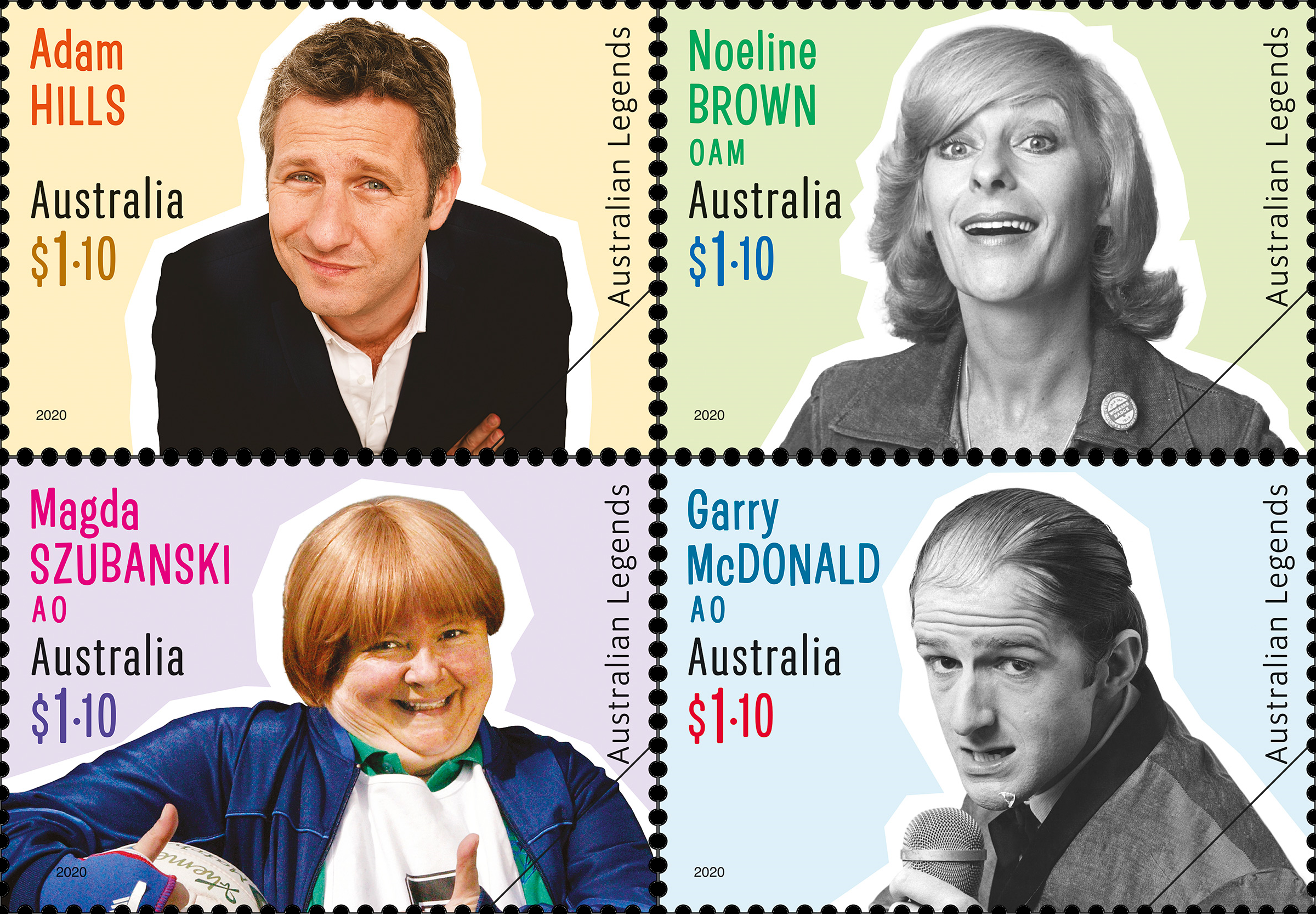 Australia’s unique brand of humour has its origins in the dry wit of 19th-century bush ballads. The nation’s comedic voice has grown over time in vaudeville theatre, radio shows, television, cinema and, more recently, podcasts. Live stand-up has long been a major part of Australia’s comedy scene; the world-renowned annual Melbourne International Comedy Festival was established in 1987.

This year’s Australia Post Australian Legends are superstars of comedy who have entertained and delighted audiences for decades, not only by giving hilarious performances but also by helping us to laugh at ourselves. The Australian Legends of Comedy 2020 are Noeline Brown OAM, Adam Hills, Garry McDonald AO and Magda Szubanski AO. 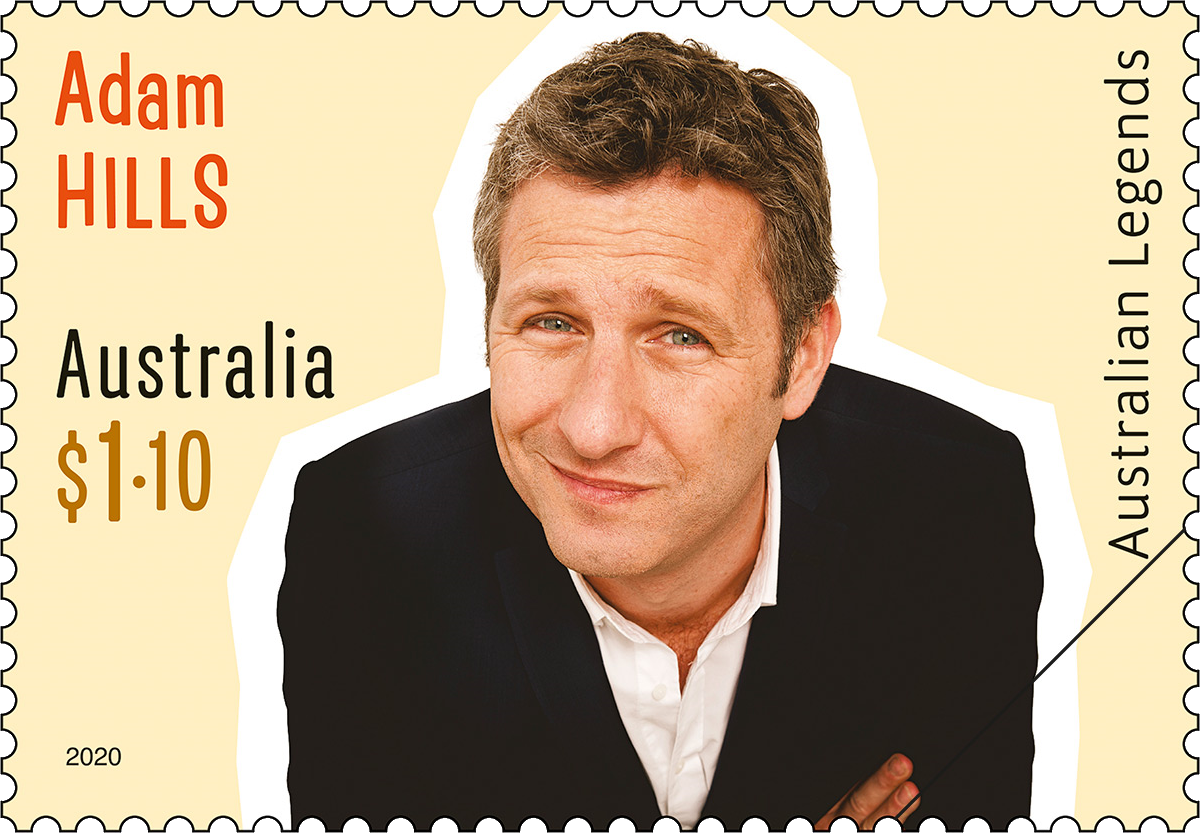 $1.10 Adam Hills
Adam Hills first appeared in Australia’s live, stand-up comedy scene in 1989, at the Sydney Comedy Store. After a stint in radio, he went on to tour an impressive 15 solo comedy shows nationally and internationally, to wide acclaim. As well as building an enviable reputation in the live comedy scene, Adam Hills shot to fame as host of the hit television music quiz show “Spicks and Specks”, from 2005 until 2011, and of television talk show “Adam Hills Tonight”, from 2011 until 2013. His fame was also cemented in Britain, as host of the television talk show “The Last Leg”, between 2012 and 2019. Adam Hills has won and been nominated for an extensive number of national and international awards for his comedy. 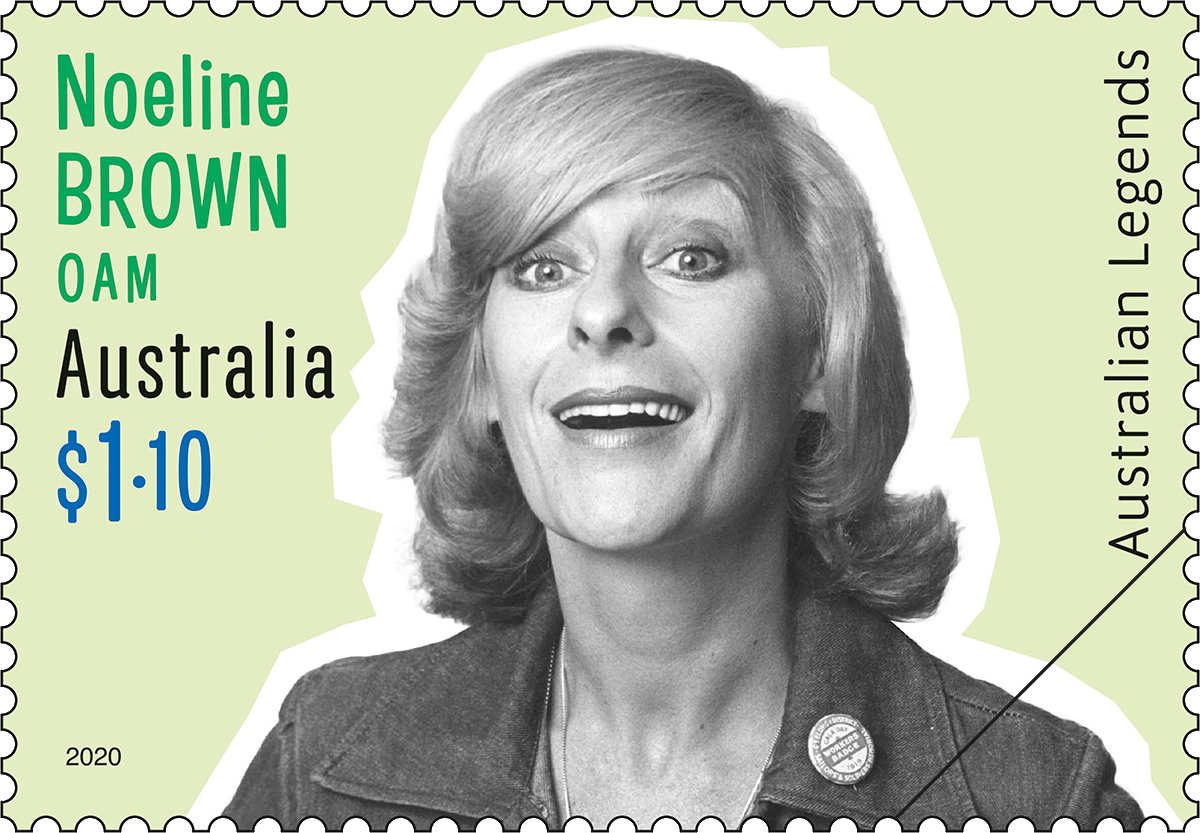 $1.10 Noeline Brown OAM
Television skit comedy and variety shows have launched the careers of many Australian comedy stars. During the 1960s and 70s, Noeline Brown starred in several classics, including “The Mavis Bramston Show” and “The Naked Vicar Show”; Noeline in rehearsal for the latter is featured on the stamp. A Logie award-winner, Noeline Brown also featured on hit television game show “Blankety Blanks”, with “the King” of variety television, Graham Kennedy, and has appeared in several stage productions. In 2017, Noeline Brown was awarded a lifetime achievement award from Actors Equity in honour of her performing career. 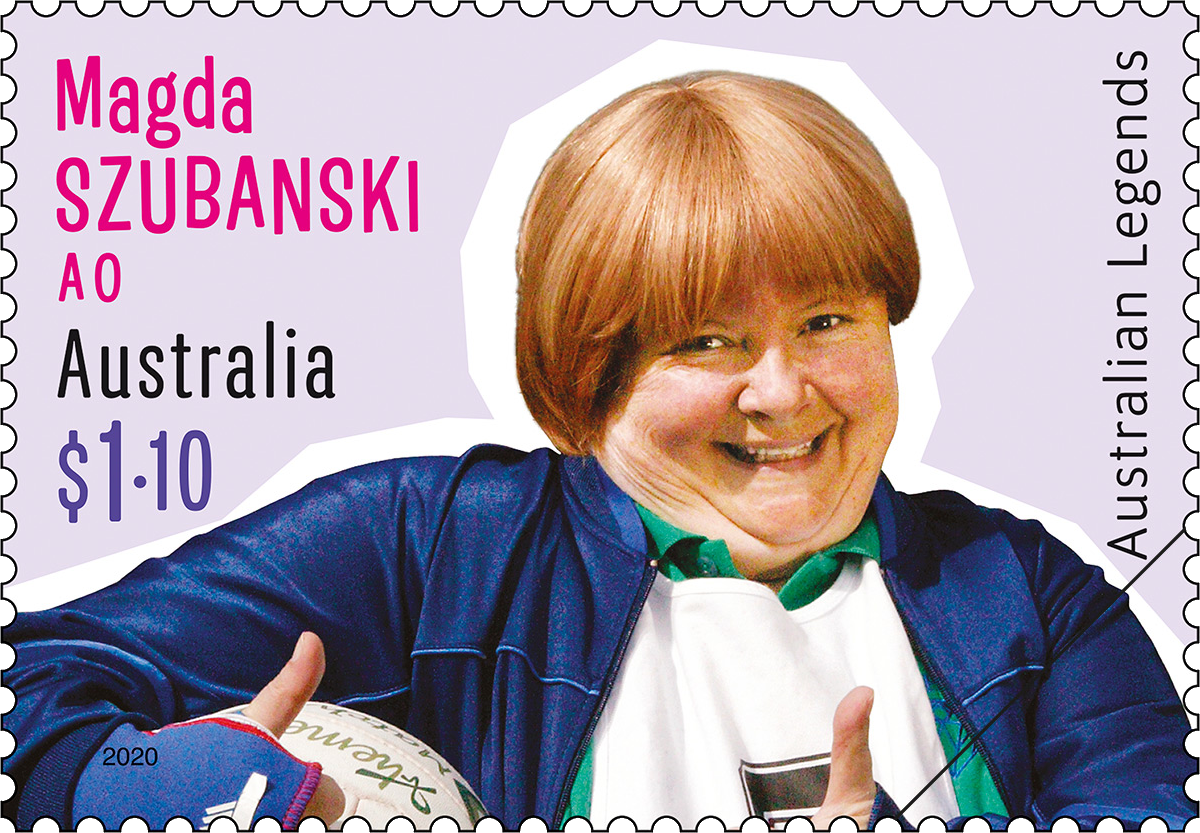 $1.10 Magda Szubanski AO
Satirical theatre revues have been early stomping grounds for Australian comedic talent. Out of university revues of the 1980s came “The D-Generation”, a band of comedians who became influential talents, including Magda Szubanski. Magda Szubanski’s multi-award-winning career in comedy writing and performance has produced much-loved characters in television’s “Fast Forward”, “Full Frontal” and “Big Girl’s Blouse”, as well as people-pleasing, accident-prone Sharon Strzelecki in “Kath and Kim” (depicted on the stamp). She has also starred in movie comedies such as Babe, and in numerous theatre productions. Magda Szubanski won the 2019 Fred Parsons Award for Outstanding Contribution to Australian Comedy. 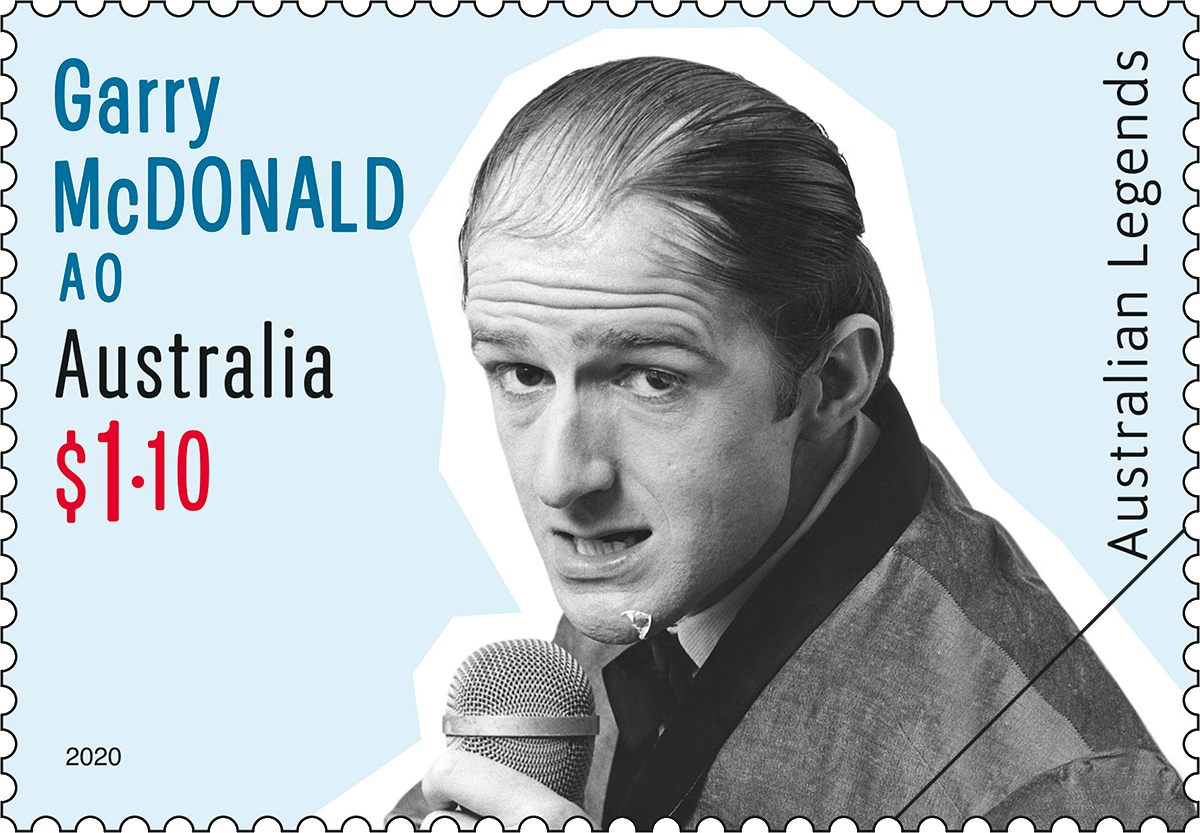 $1.10 Garry McDonald AO
Self-mockery and cynicism, with a hint of larrikinism, have been hallmarks of Australian comedy, as has the creation of satirical characters. Garry McDonald’s seemingly-naïve, ambush-style reporter Norman Gunston (pictured on the stamp) first appeared on “The Aunty Jack Show” in 1973 and then on “The Norman Gunston Show” until 1993, bewildering unknowing celebrities along the way. Logie-winning McDonald, a National Living Treasure, further endeared himself to audiences as the long-suffering Arthur Beare, in the television comedy series “Mother and Son”, and has since performed in numerous film and theatre productions. 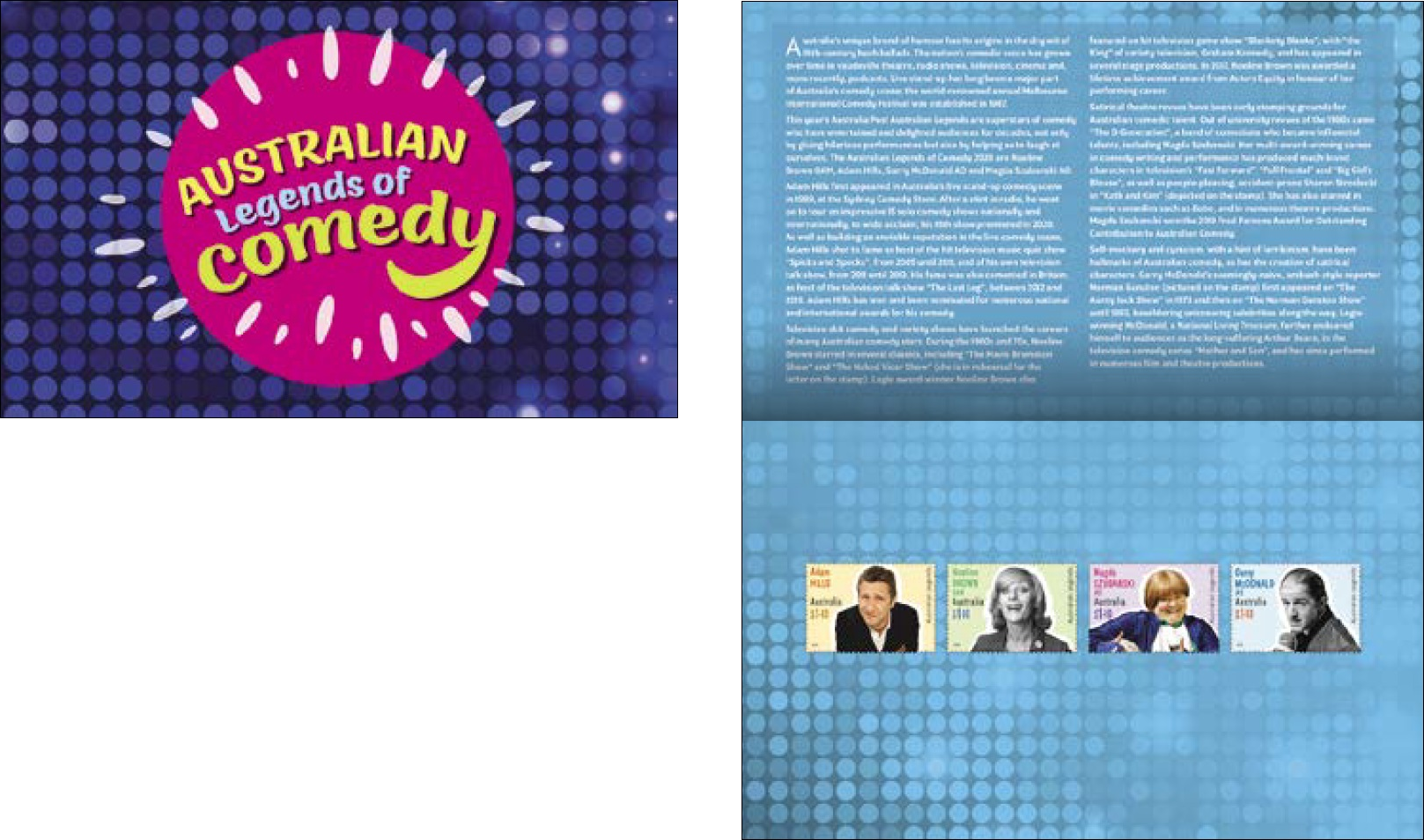 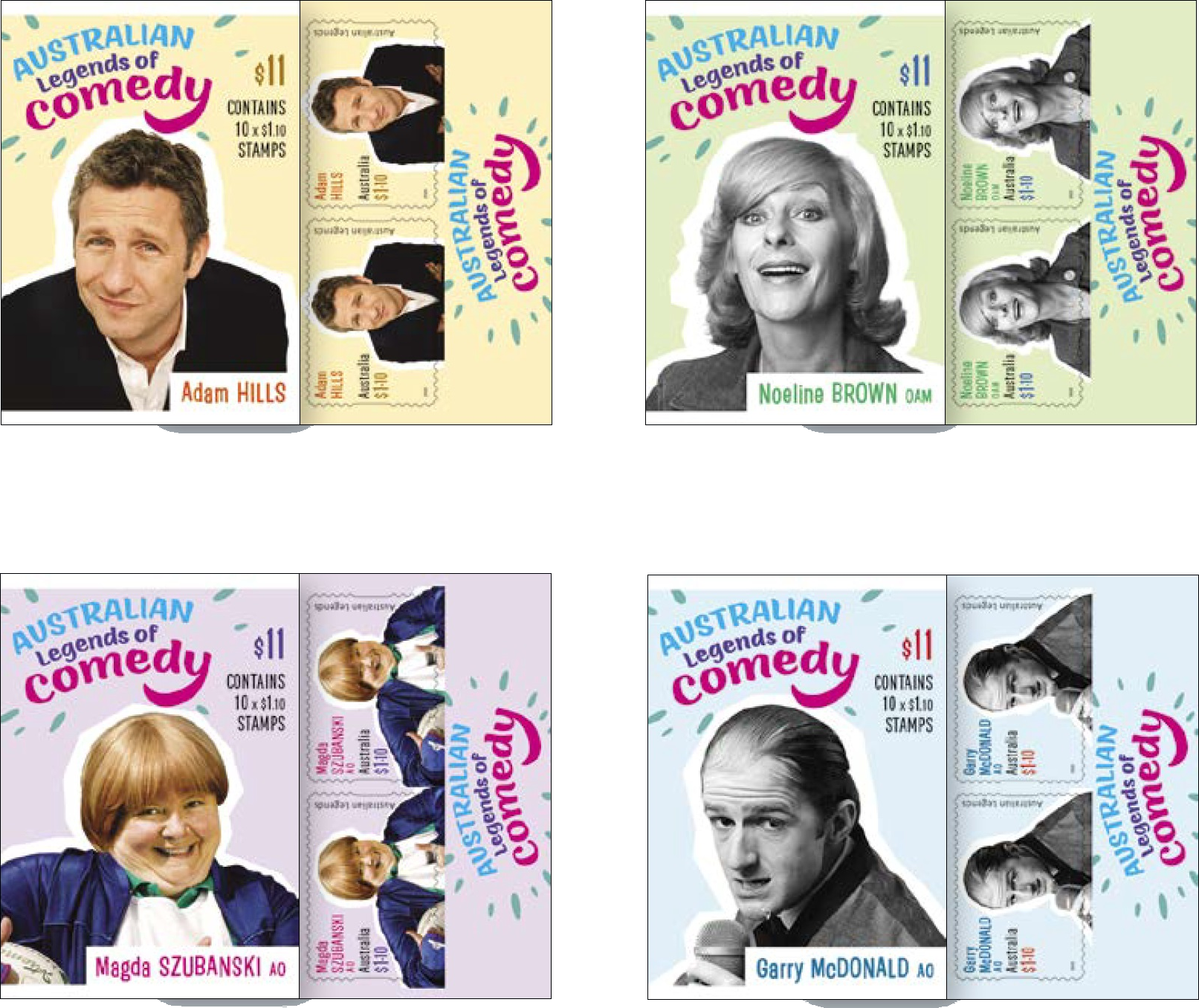 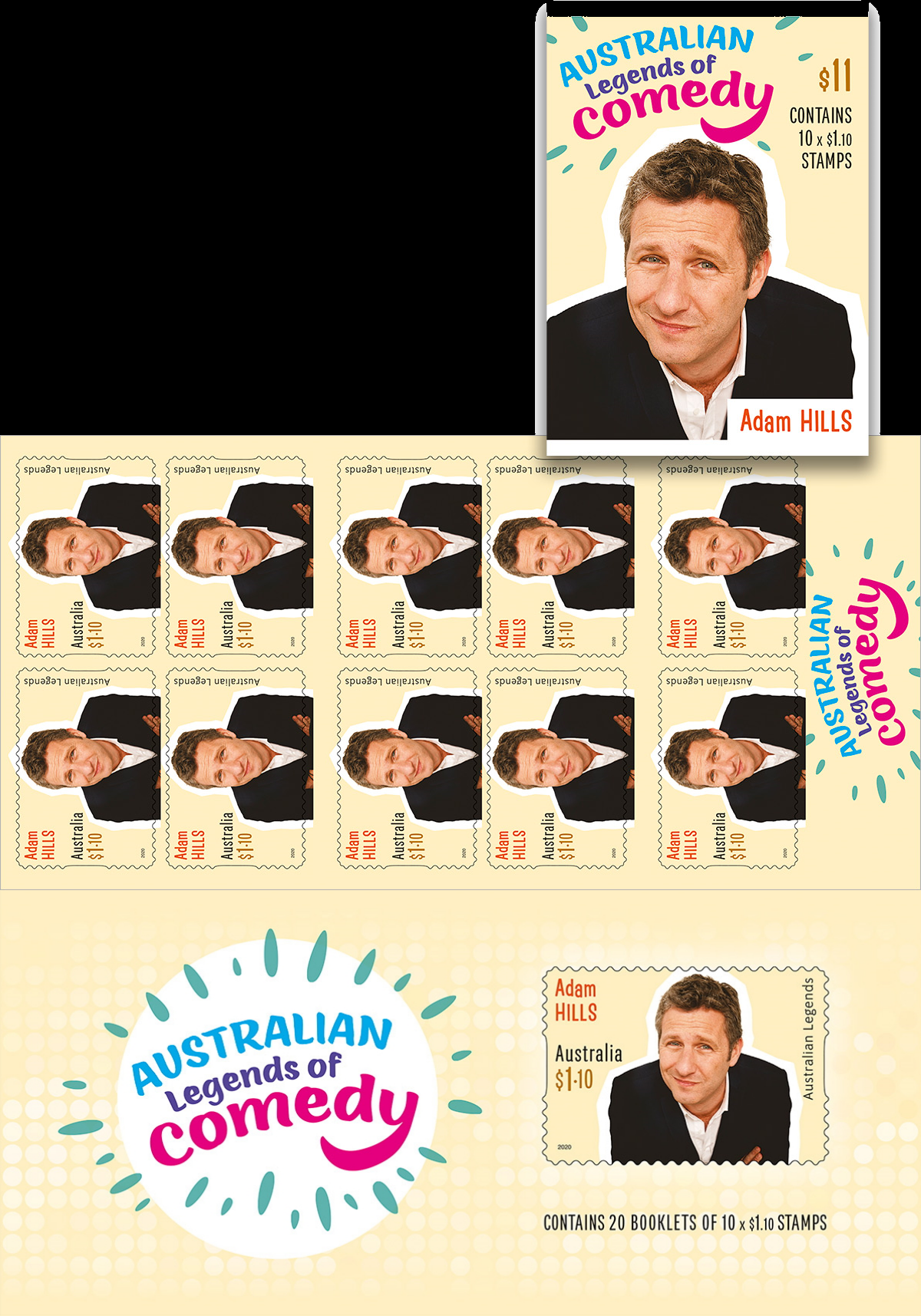 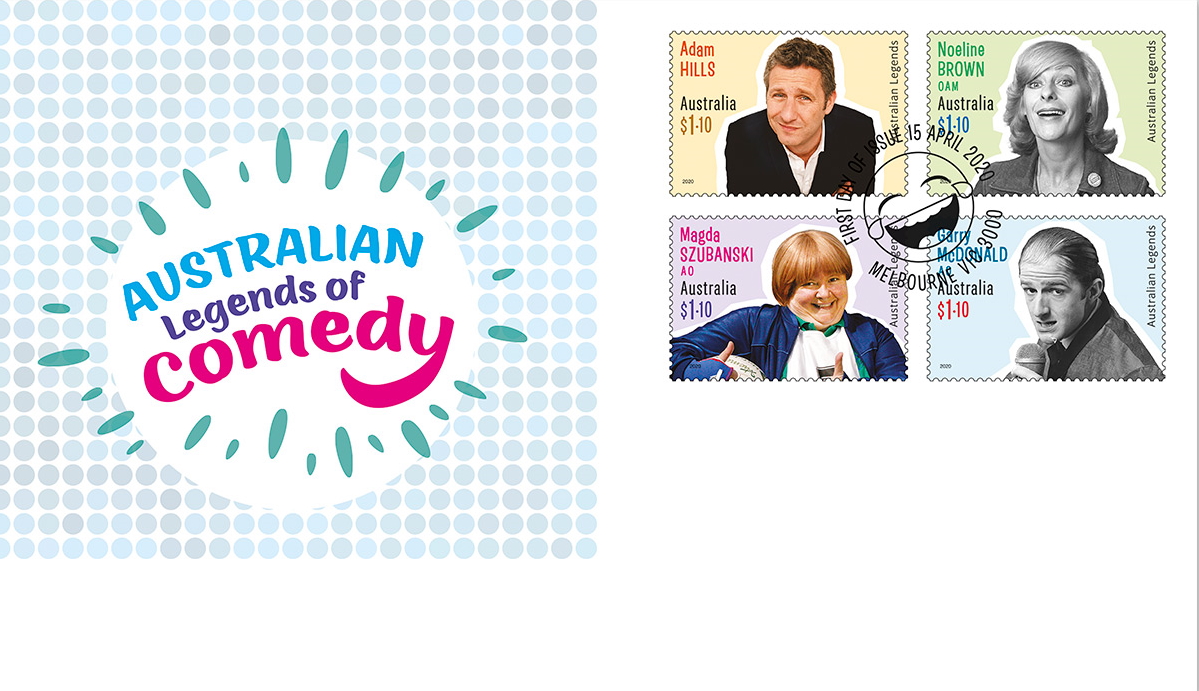 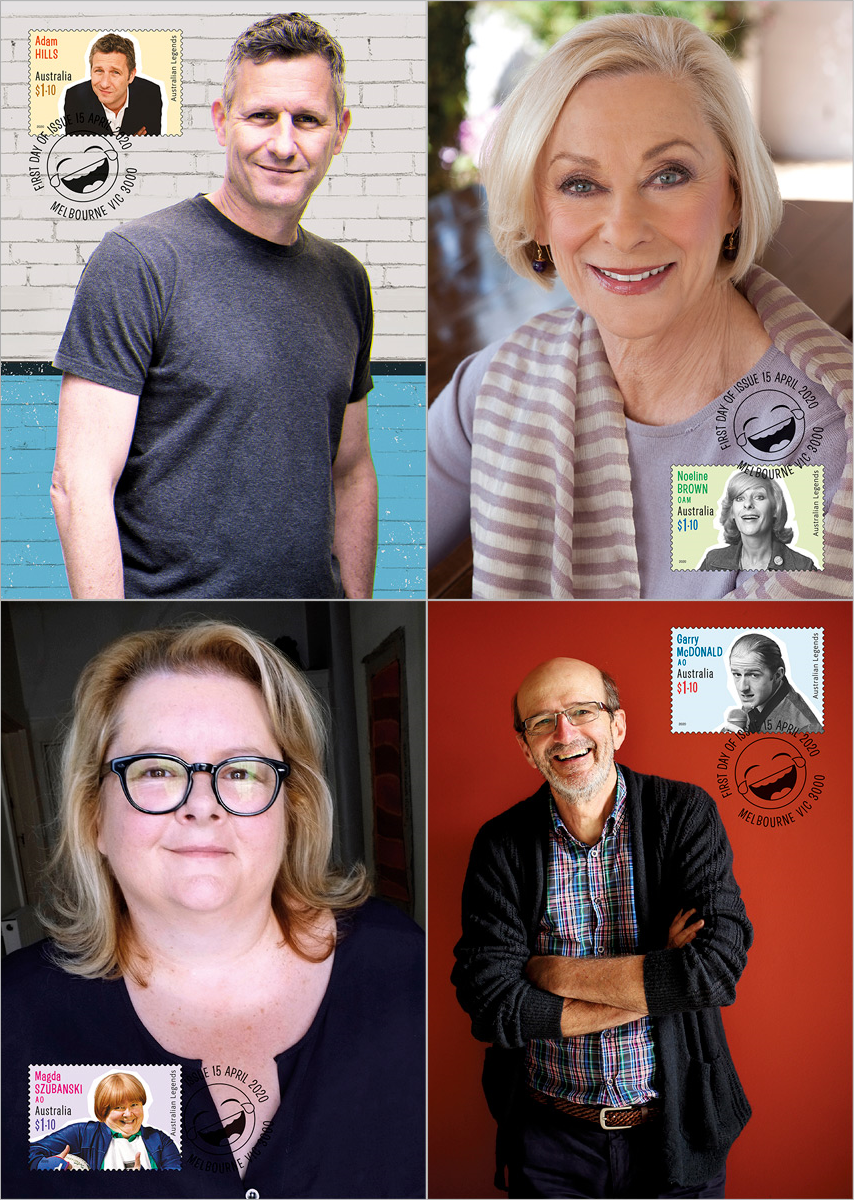 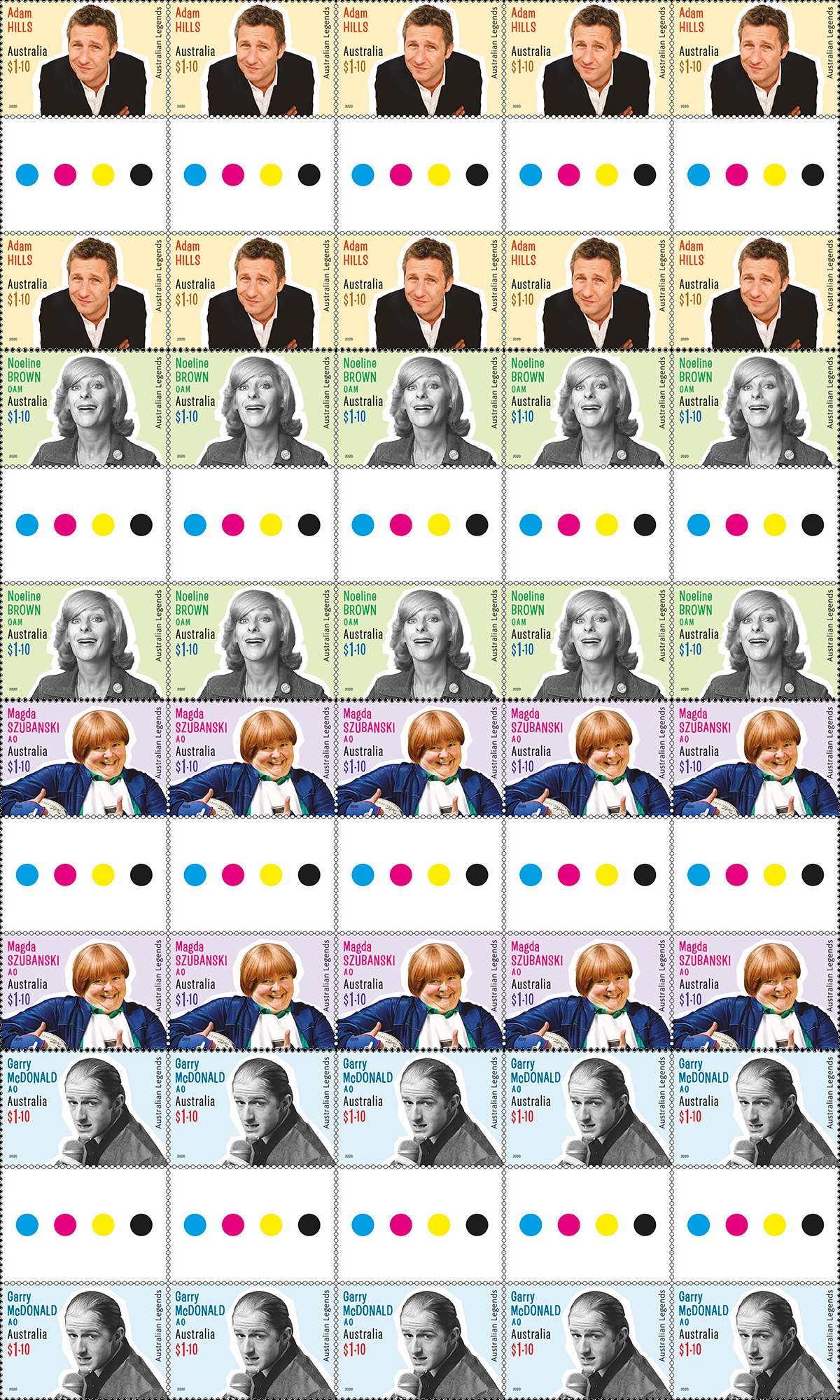 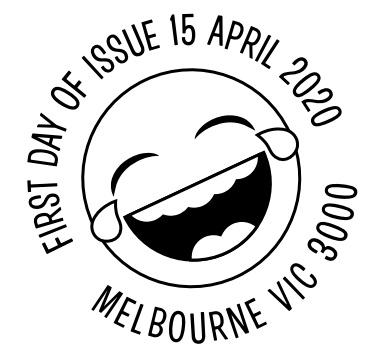