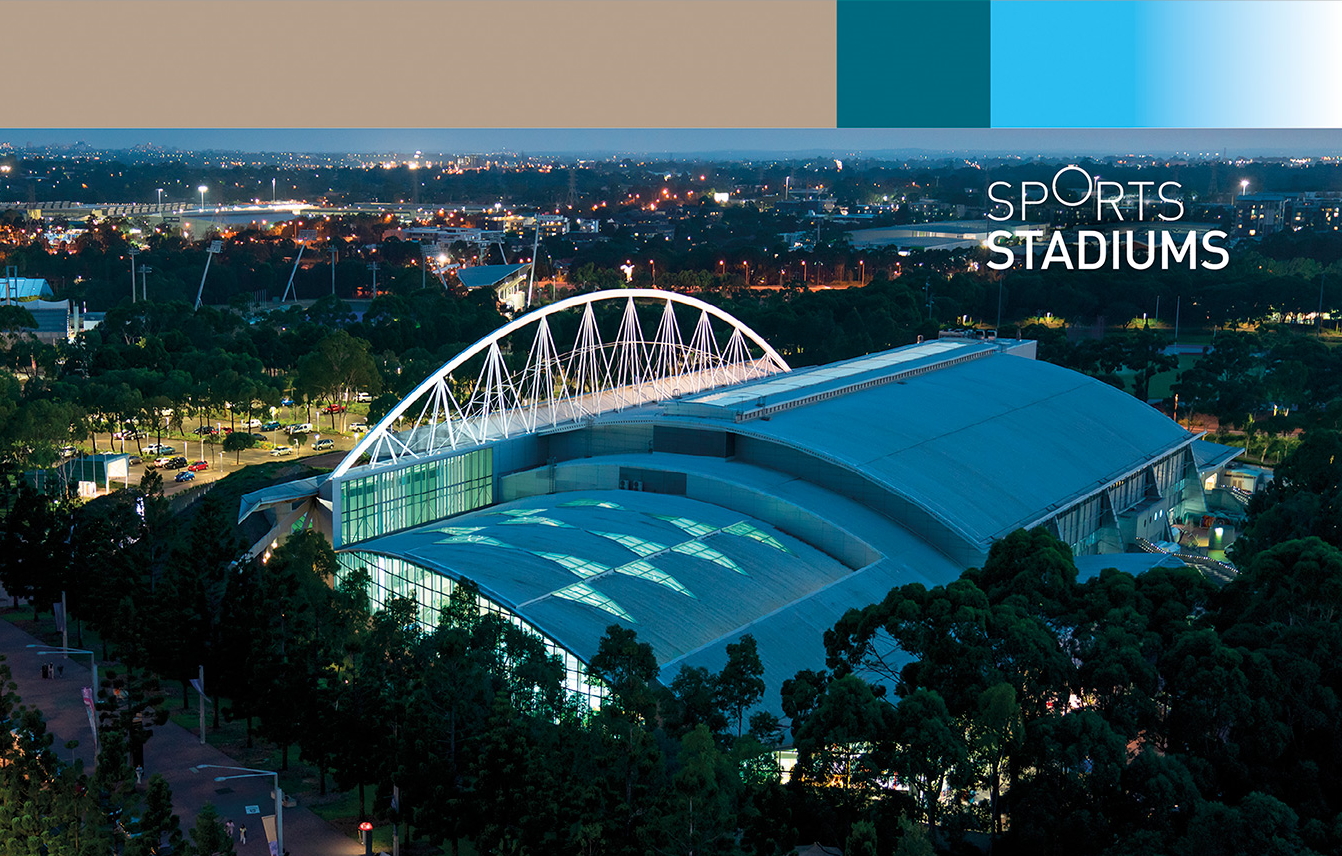 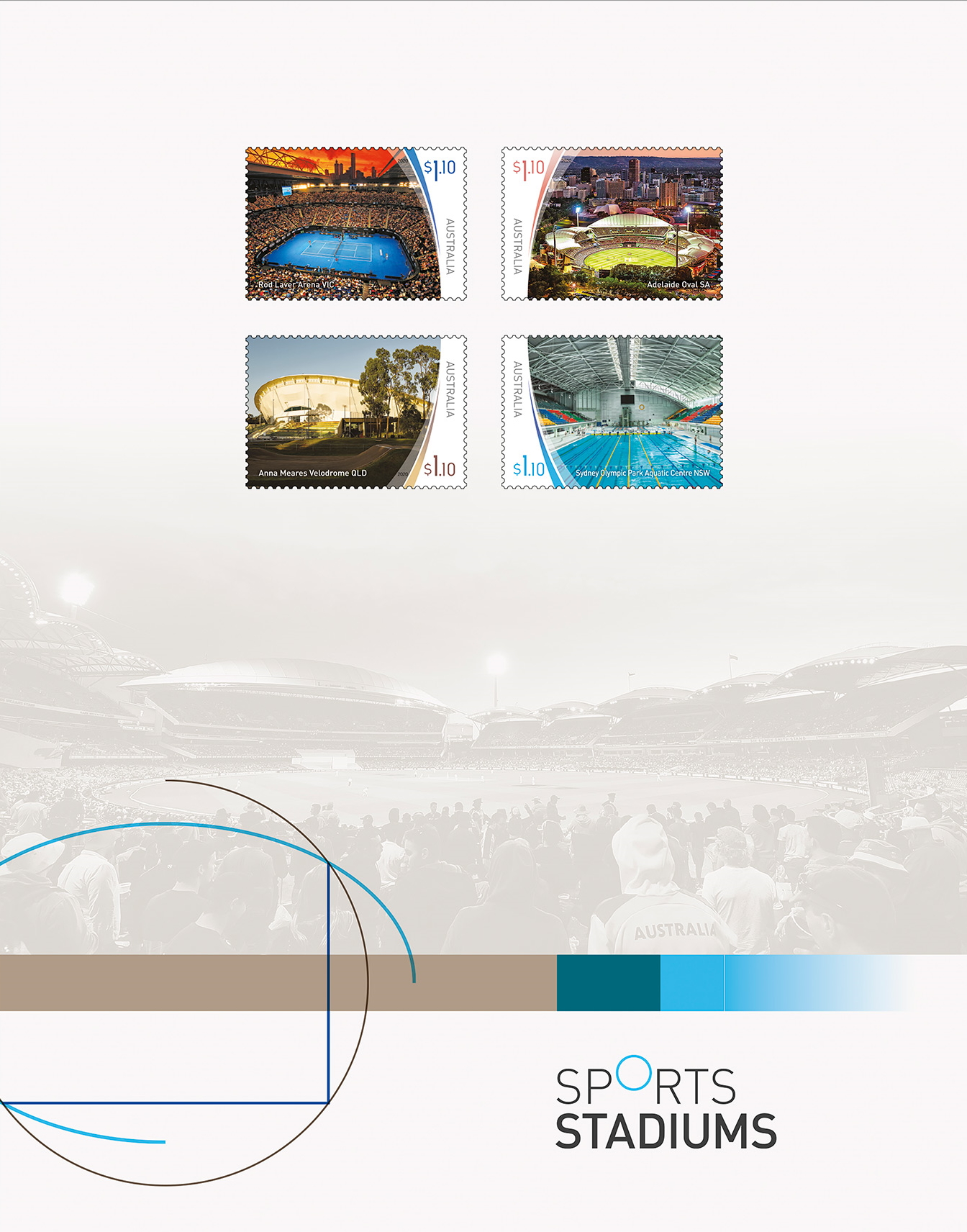 This stamp issue is the second in a pair recognising Australian sports culture through some of our key sporting venues. The stamps in this series recognises the cultural and architectural value of these venues as well as the popularity of the sports played within them.

Australia’s major sporting venues have contributed to our impressive international reputation as a nation that hosts, participates in and supports an impressive number of sporting events. As well as being physical symbols for sports, stadiums are often and increasingly bold architectural statements, incorporating state-of-the-art technology and becoming multi-purpose, with many also hosting music concerts and other cultural events. 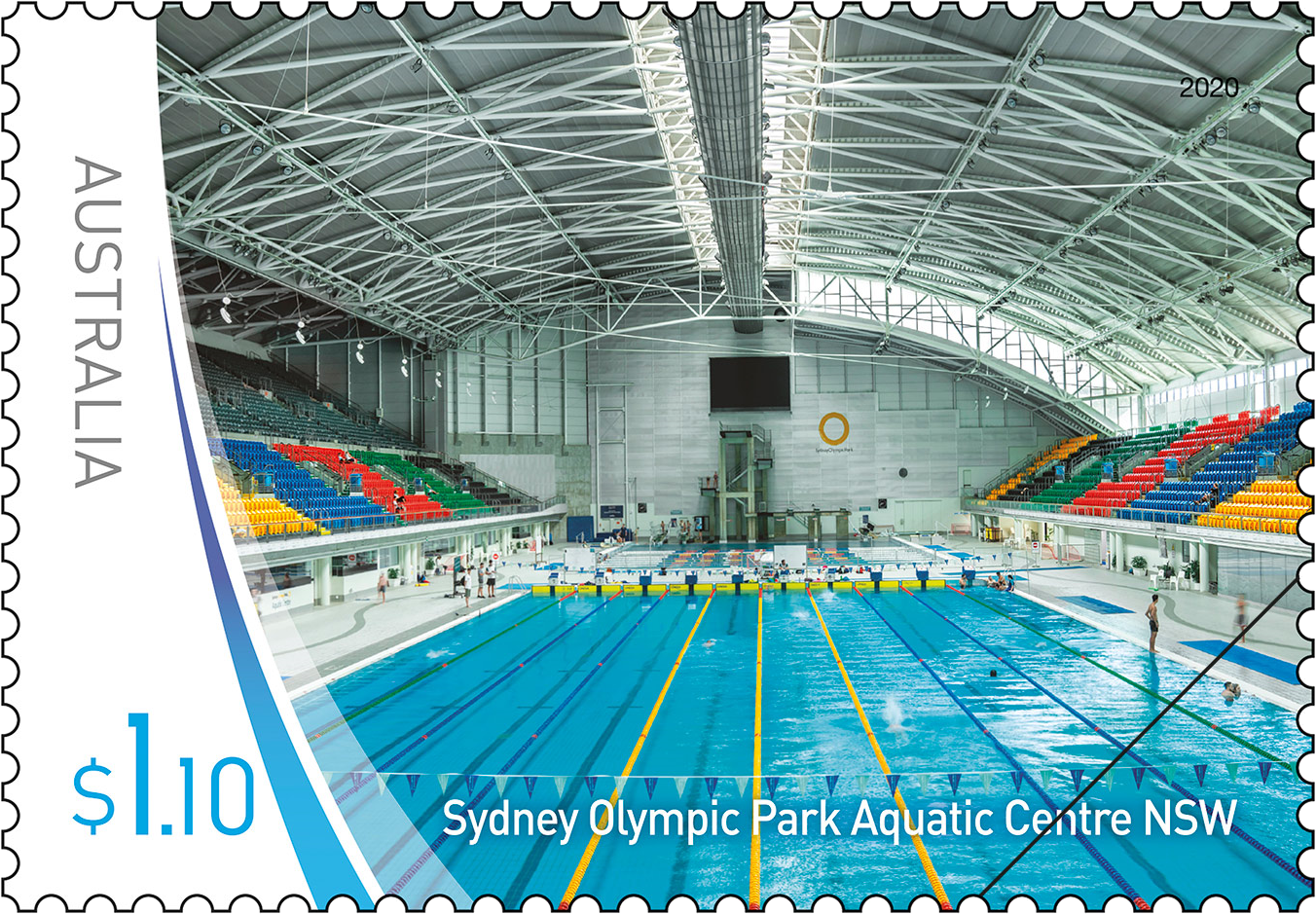 $1.10 – Sydney Olympic Park Aquatic Centre, NSW
Opened in 1994 and located at Homebush, Sydney Olympic Park Aquatic Centre was a key part of Sydney’s successful bid to host the 2000 Olympic Games. Then president of the International Olympic Committee Juan-Antonio Samaranch claimed it was “the best swimming pool I have seen in my life”. The centre combines competition with leisure facilities, comprising a 50-metre swimming pool, a diving pool, and utilities and leisure pools. When constructed, the main competition pool had equal of seating on either side, accommodating 4,500 spectators overall. For the Olympics, the seating on one side pool was dramatically increased to accommodate a capacity crowd of 17,000; the seating was later reduced for a crowd of 10,000.

The stamp photograph is by Ethan Rohloff. 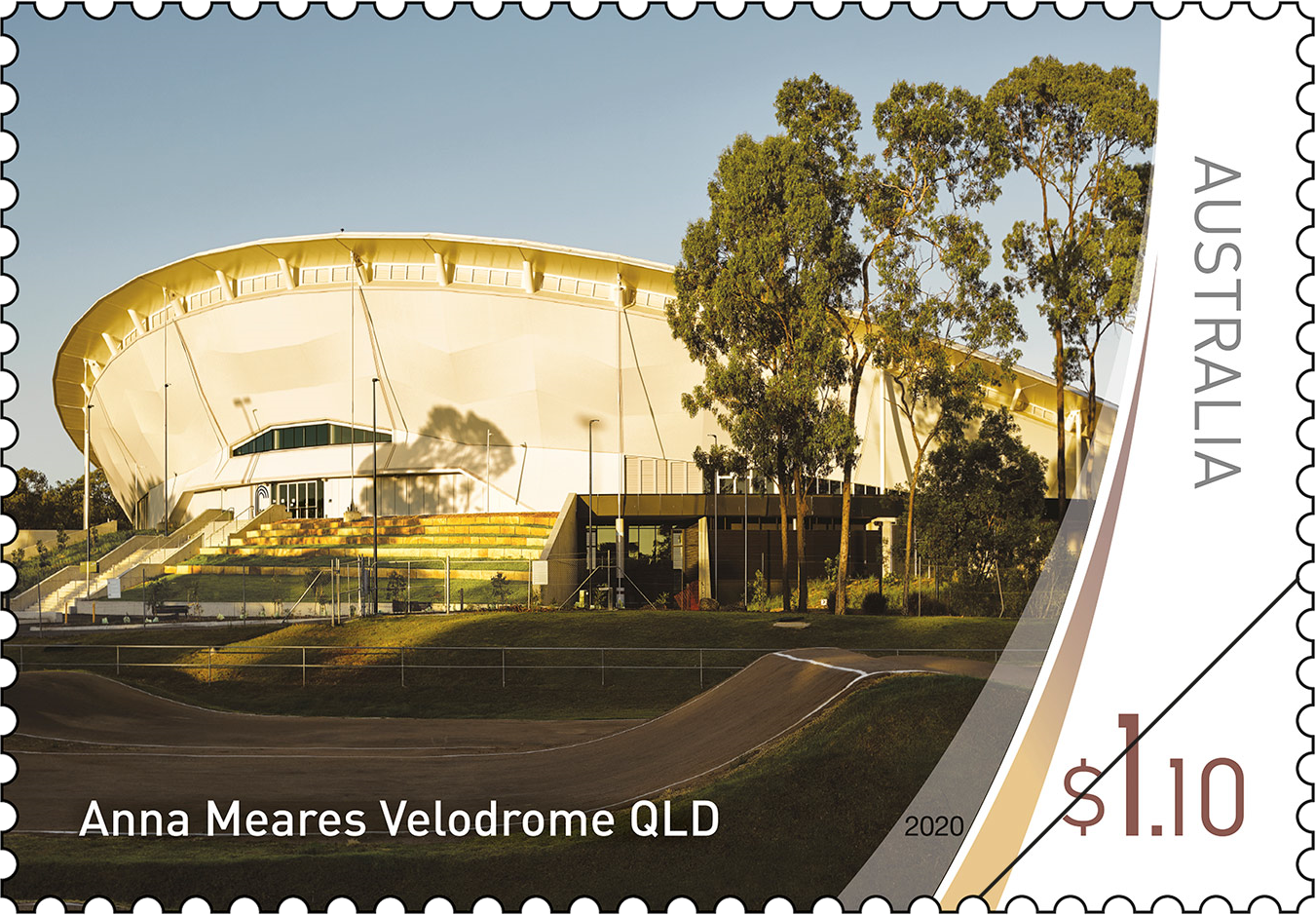 $1.10 – Anna Meares Velodrome, Qld
Named in honour of Australia’s former track cycling champion, the Anna Meares Velodrome was purpose-built for the 2018 Gold Coast Commonwealth Games. Opened in 2016, it comprises part of Brisbane’s Sleeman Sports Complex, located 15 kilometres from Brisbane’s CBD, in Chandler. The building has a large saddle-form roof over the 10,000-square-metre interior. Its walls and roof are clad with a combination of translucent and opaque tensioned membrane fabric. The track is a 250-metre circuit, with a steepest gradient at an angle of 43.9 degrees, and is recognised as a “wide track”, so well suited to team pursuit events. As Queensland’s first indoor velodrome, it is the key site for track cycling events in the state. It has fixed seating for 1,500, which can be supplemented, as it was for the Commonwealth Games, to accommodate a crowd of 3,900.

The stamp photograph is by Christopher Frederick Jones. 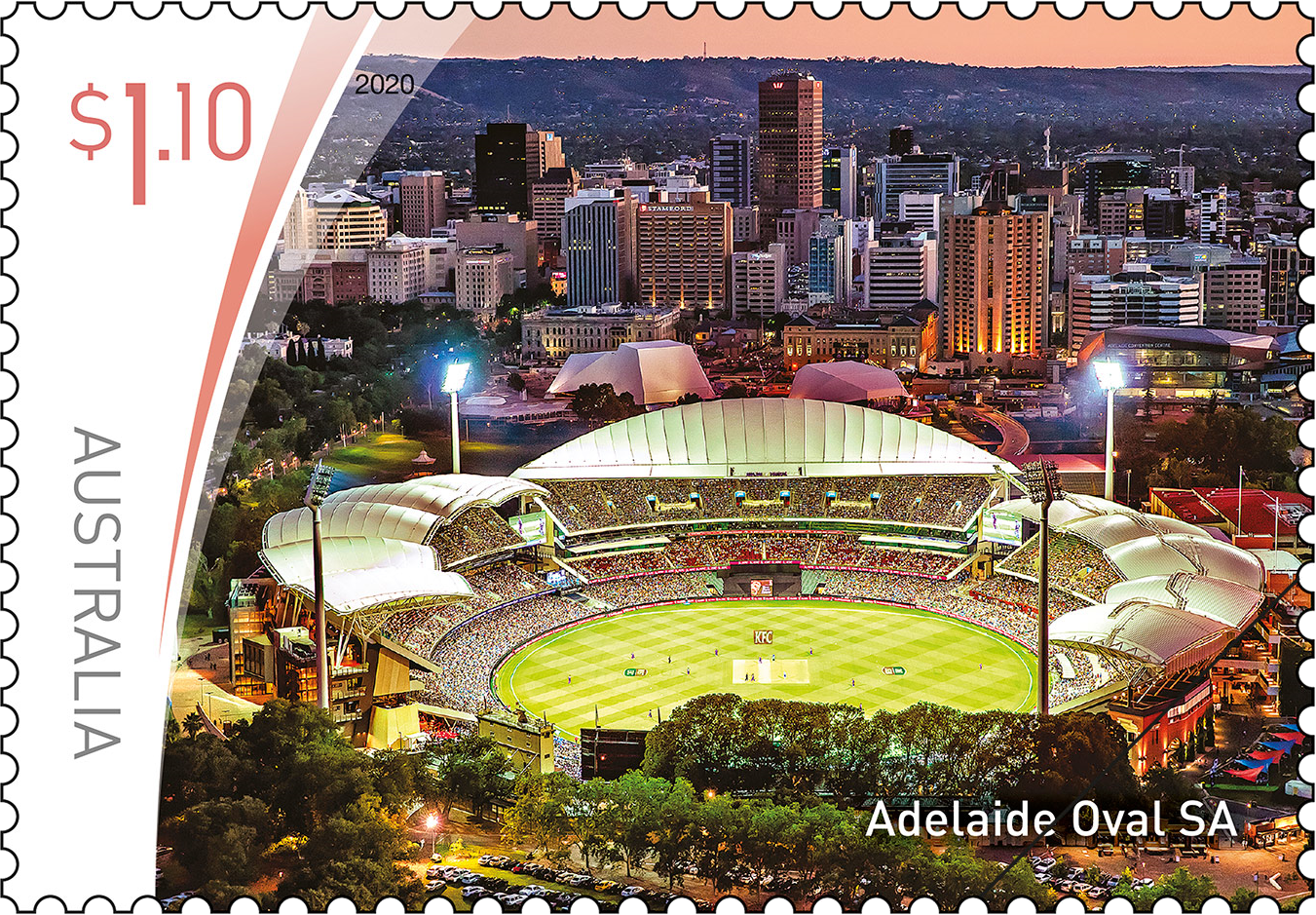 $1.10 – Adelaide Oval, SA
Located on the banks of the Torrens River, right near the city centre, Adelaide Oval was established in 1871, following the formation of the South Australian Cricket Association. The impressive and historic venue hosts international and domestic cricket and AFL football, as well as other sports, concerts, functions and major events. The venue’s recent major redevelopment, completed in 2014, transformed it into a world-class sports facility, while retaining its key historical aspects, such as its celebrated hill, grand Morton Bay figs, and scoreboard. Adelaide Oval’s three new grandstands – above which “float” sequences of shell-like roofs – can together hold a seated capacity crowd of more than 50,000 spectators, with space enough for another 3,000 fans on the grassy slopes of the hill.

The stamp photograph is by Hiro Ishino. 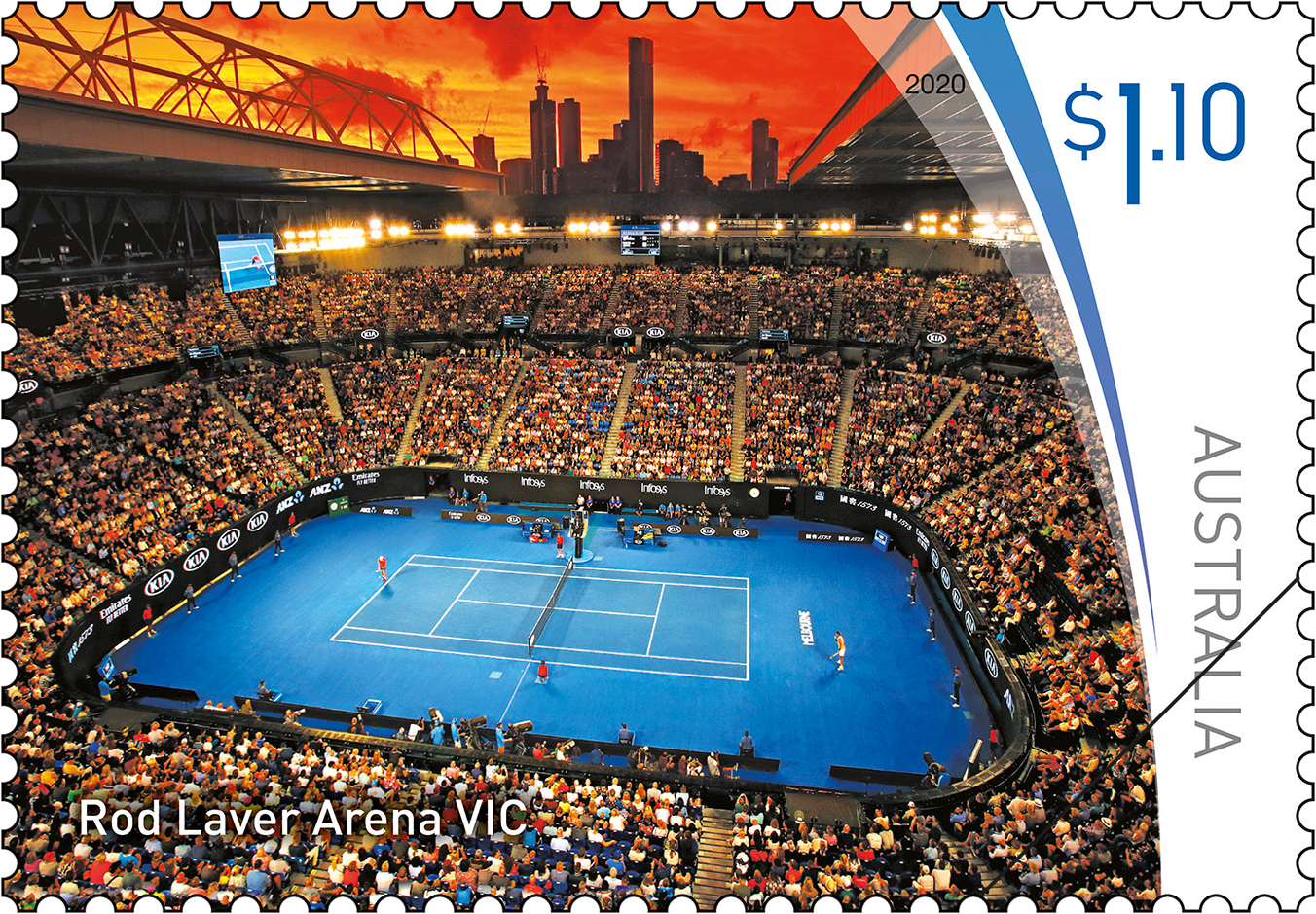 $1.10 – Rod Laver Arena, Vic.
Completed in 1988, and located at Melbourne Park, just east of Melbourne’s CBD, Rod Laver Arena was built as a focal point of national tennis and the new location of the Australian Open (which had been played at Kooyong since 1972). Its centre court seats almost 15,000 spectators, who can marvel at its retractable roof. In 2000, the venue (previously known as the National Tennis Centre at Flinders Park) was renamed Rod Laver Arena in honour of one of Australia’s most successful and internationally renowned tennis players. Completed in 2019, its most recent renovation comprises a new eastern entrance, featuring new dining and corporate spaces, along with increased player and spectator amenities.

The stamp photograph is by Scott Barbour, via Getty Images. 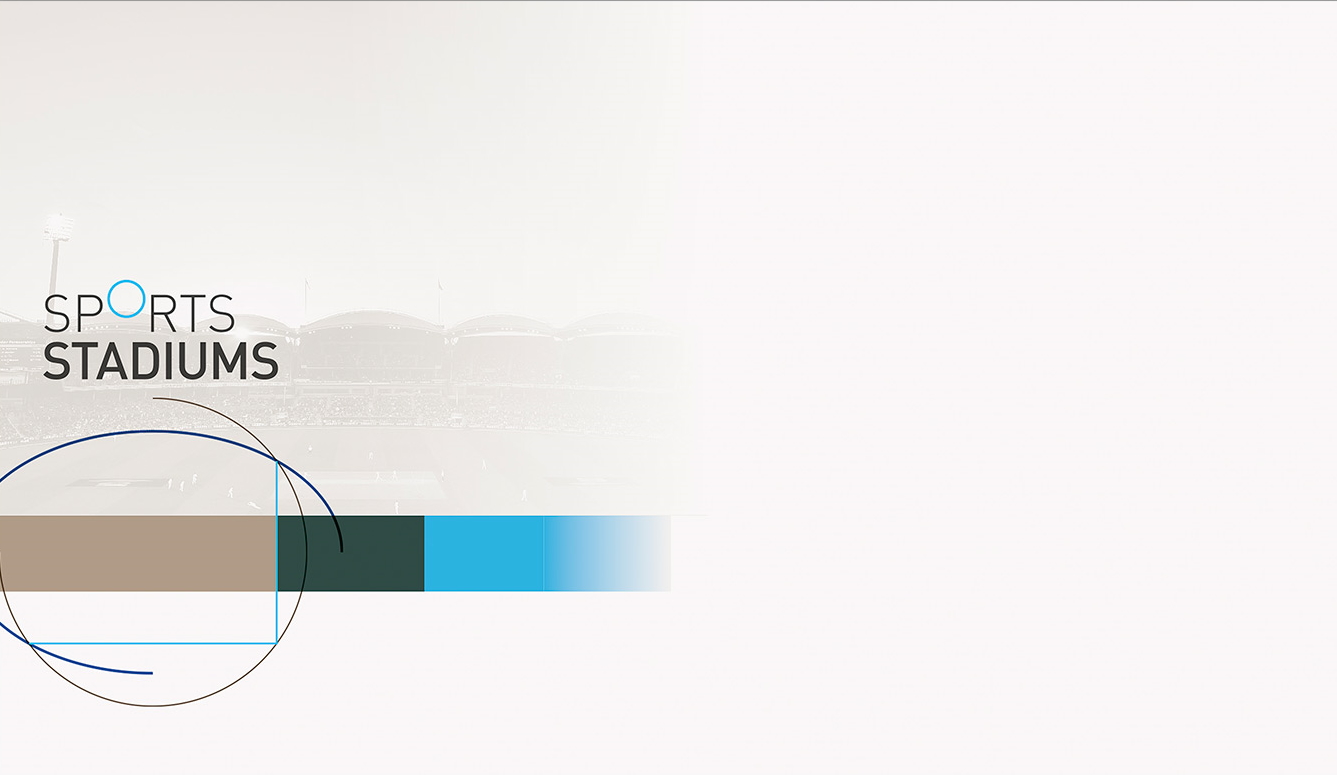 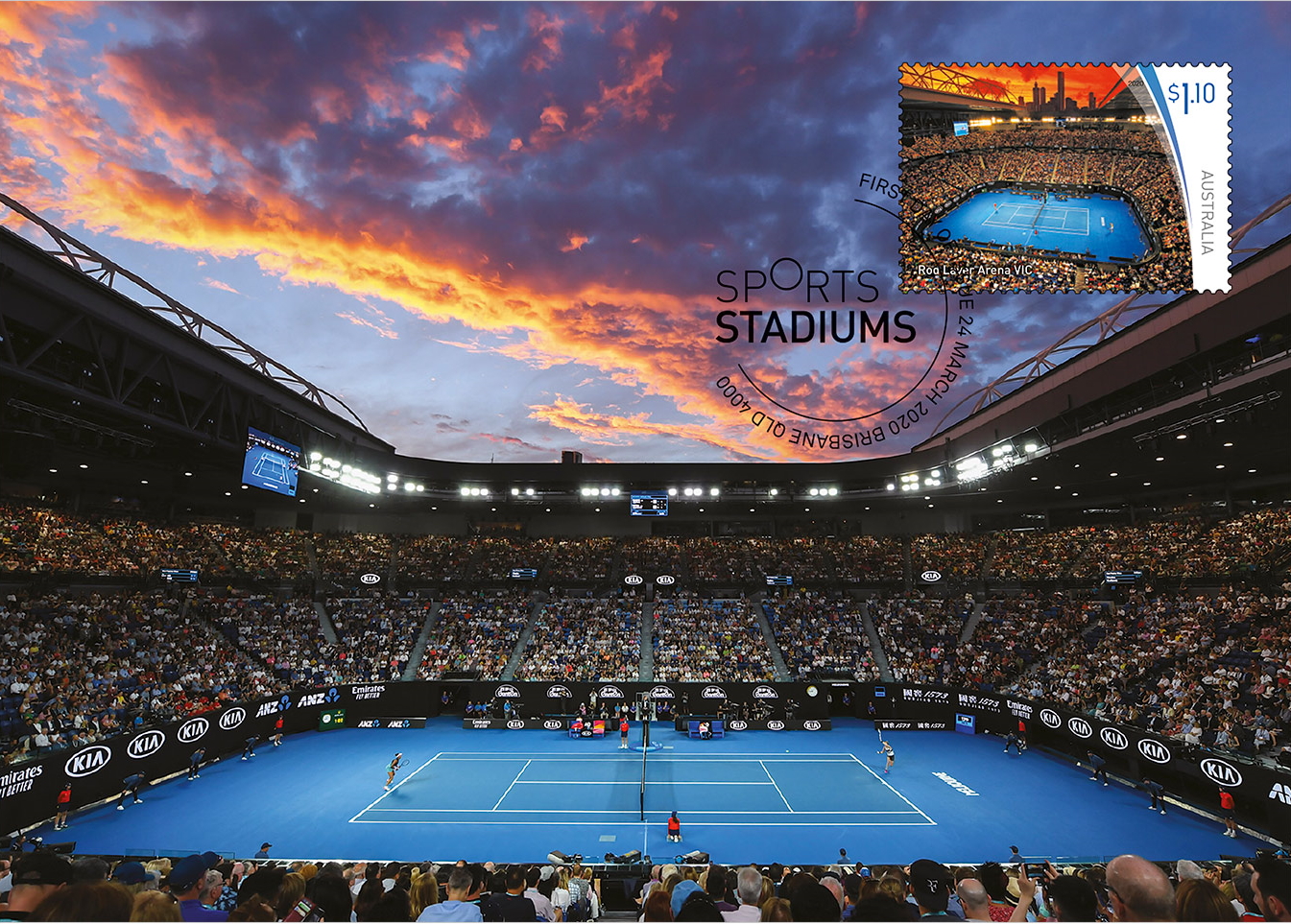 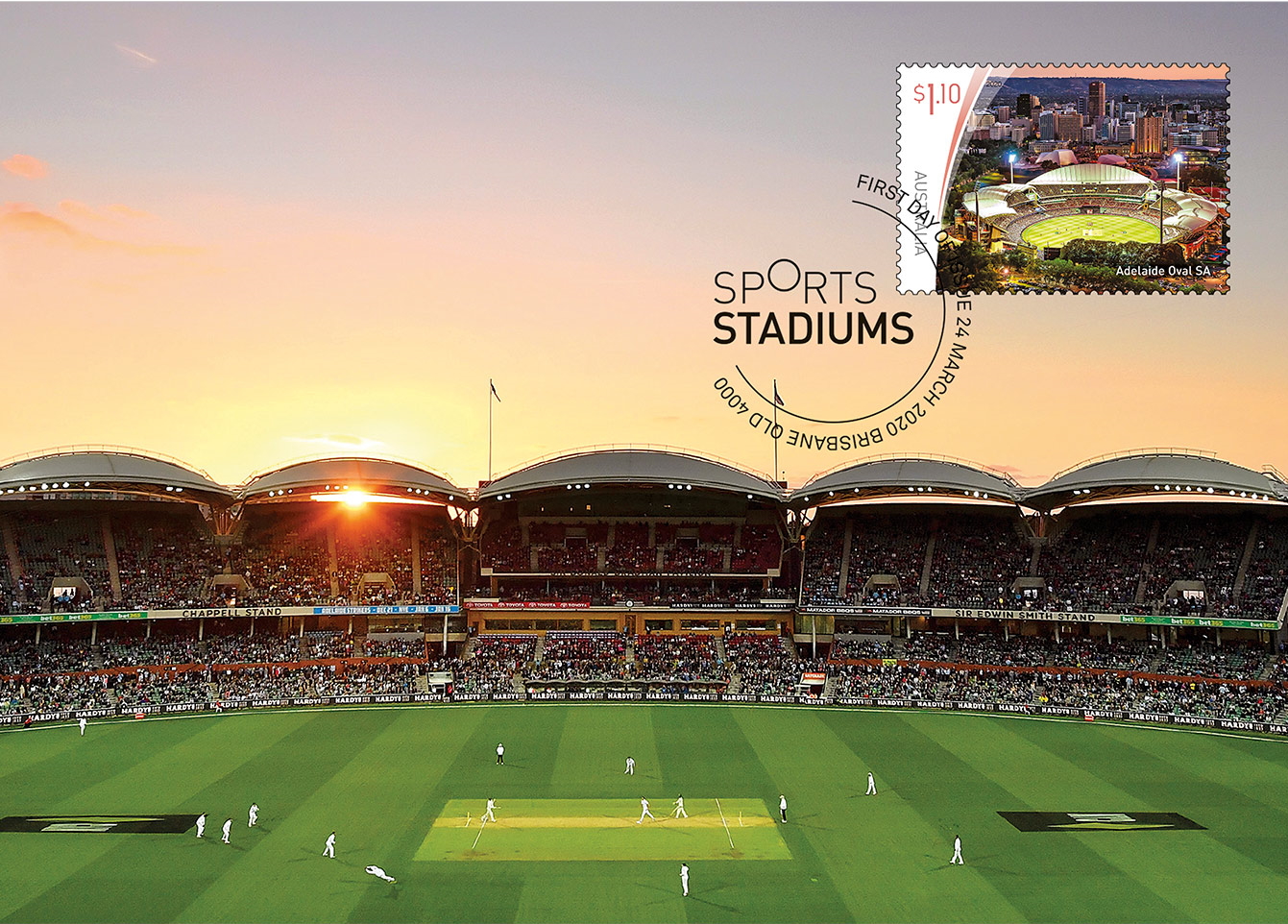 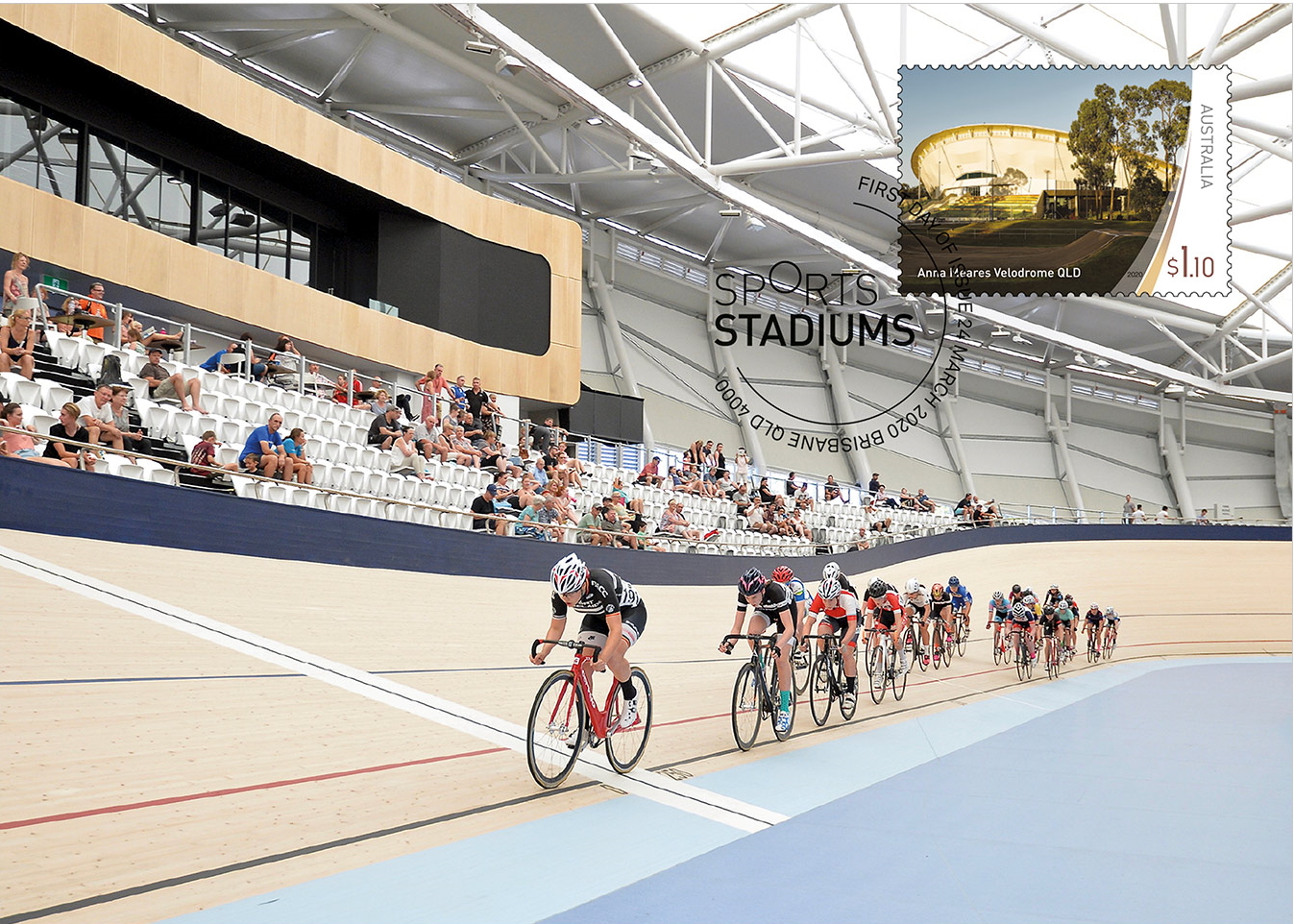 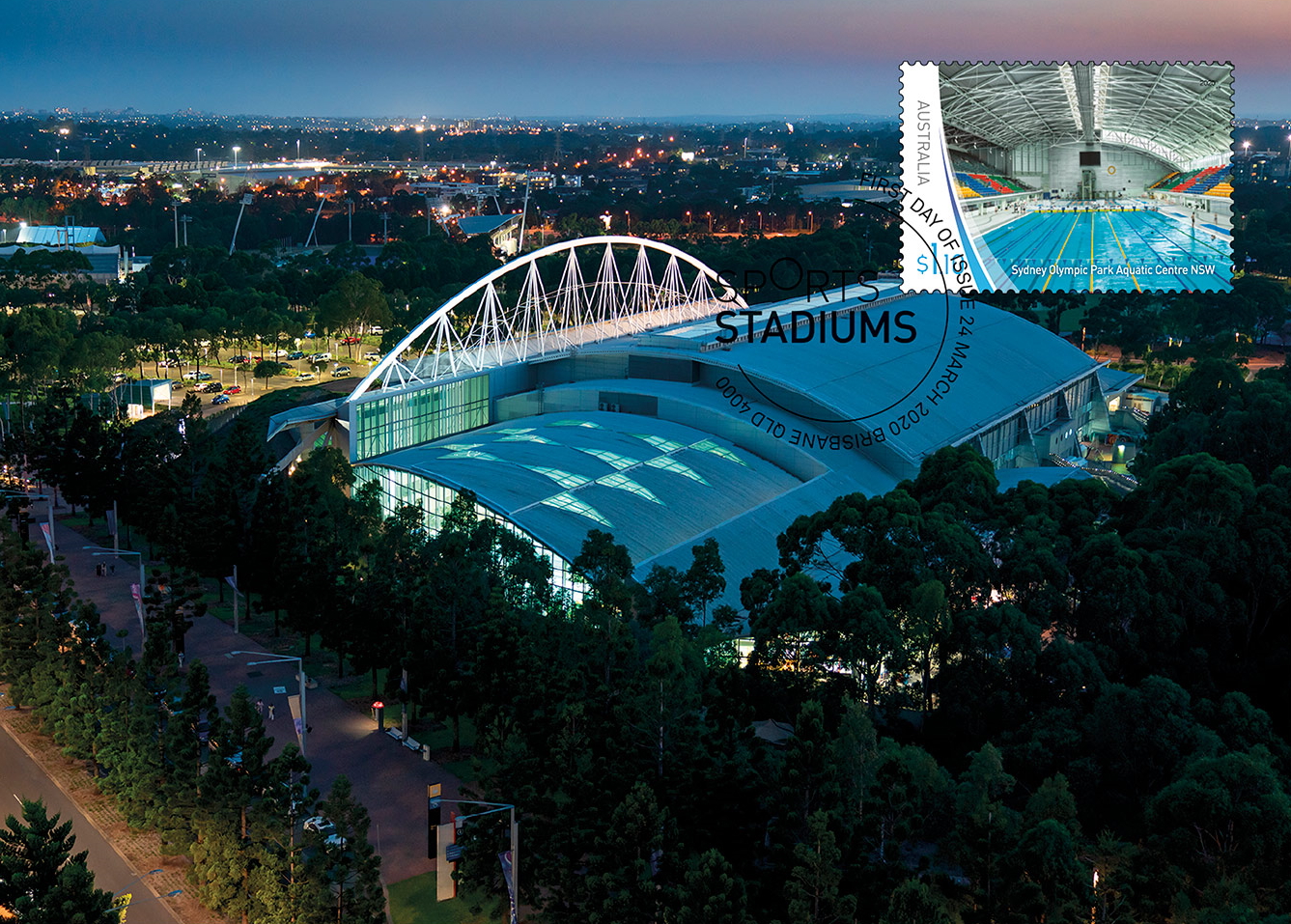 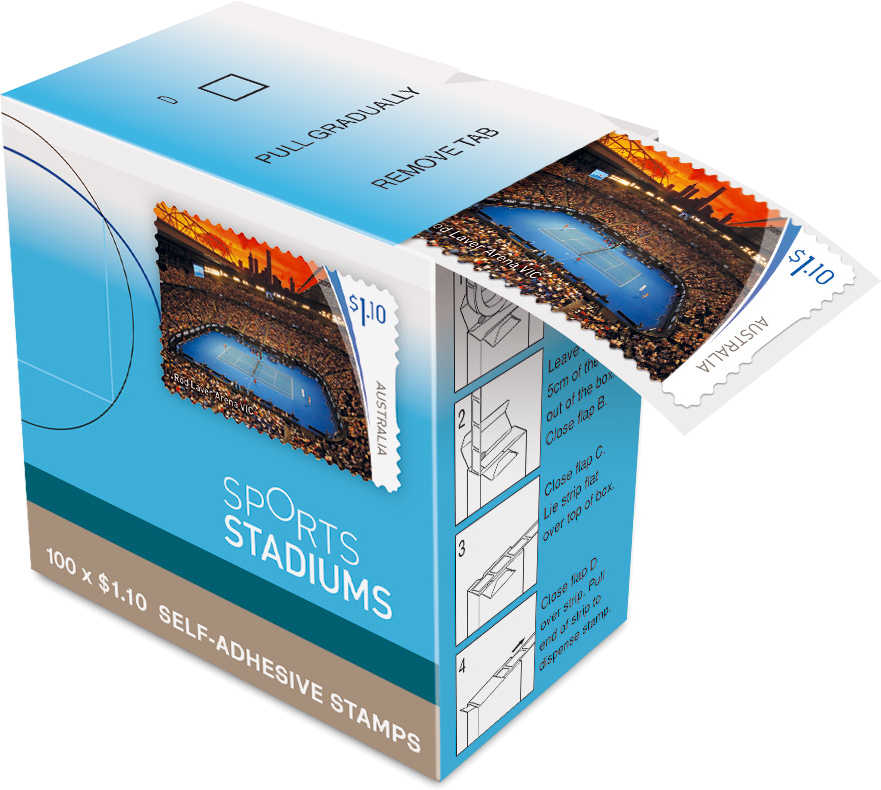 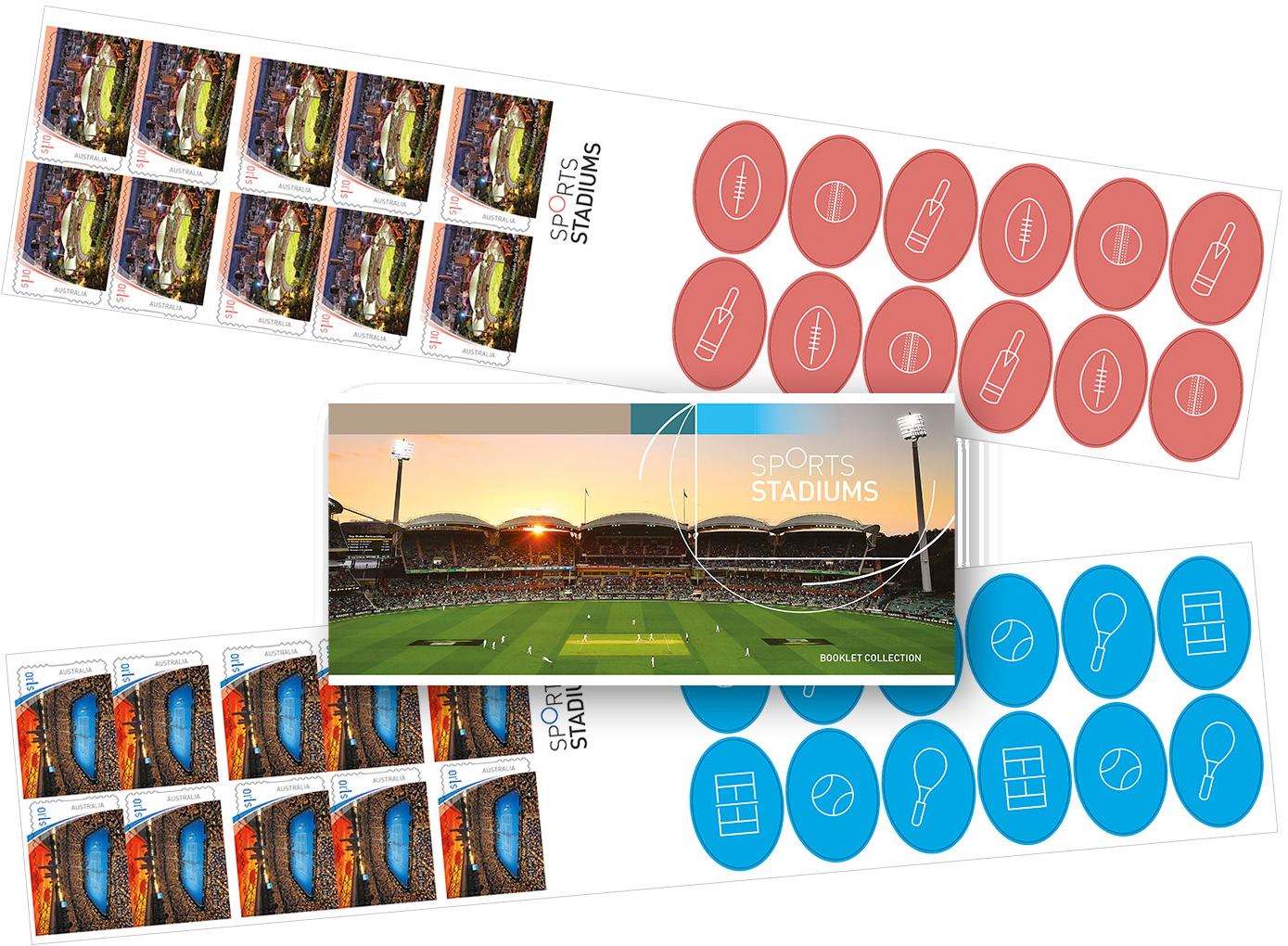 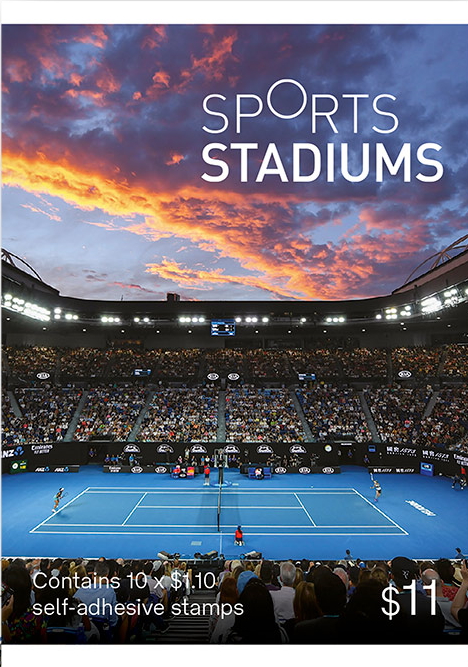 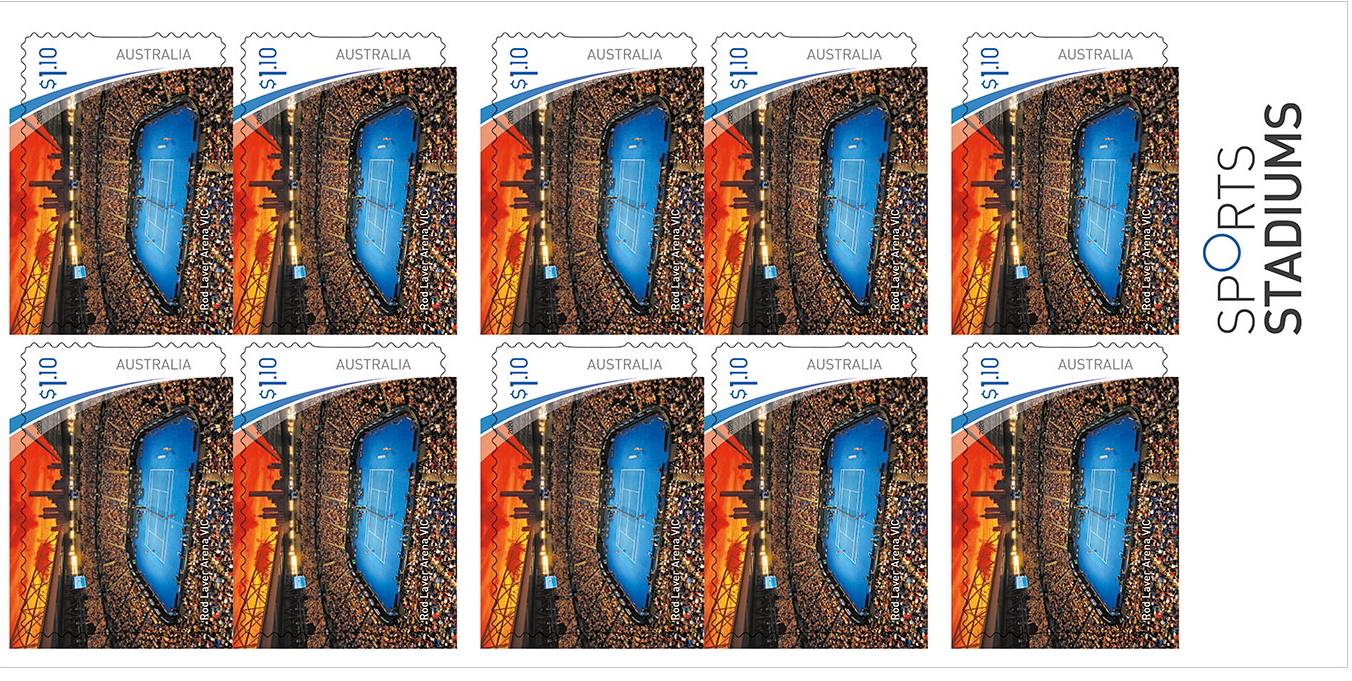 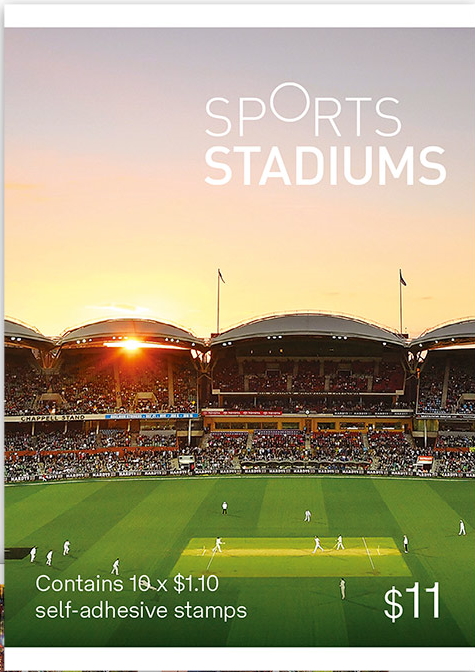 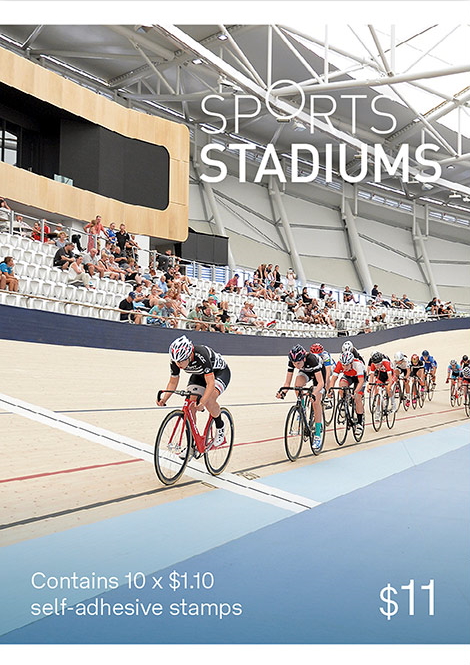 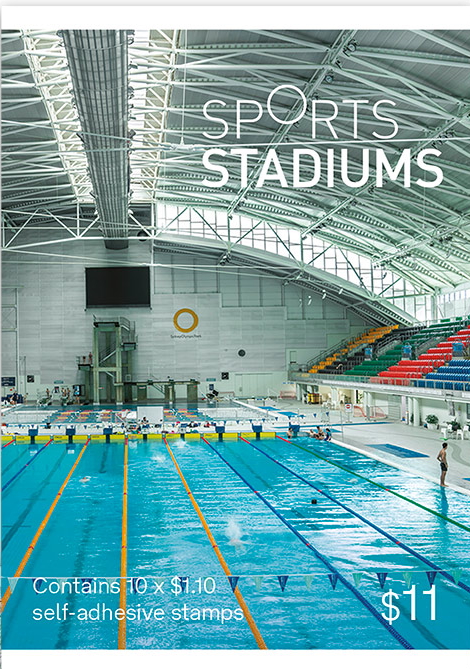 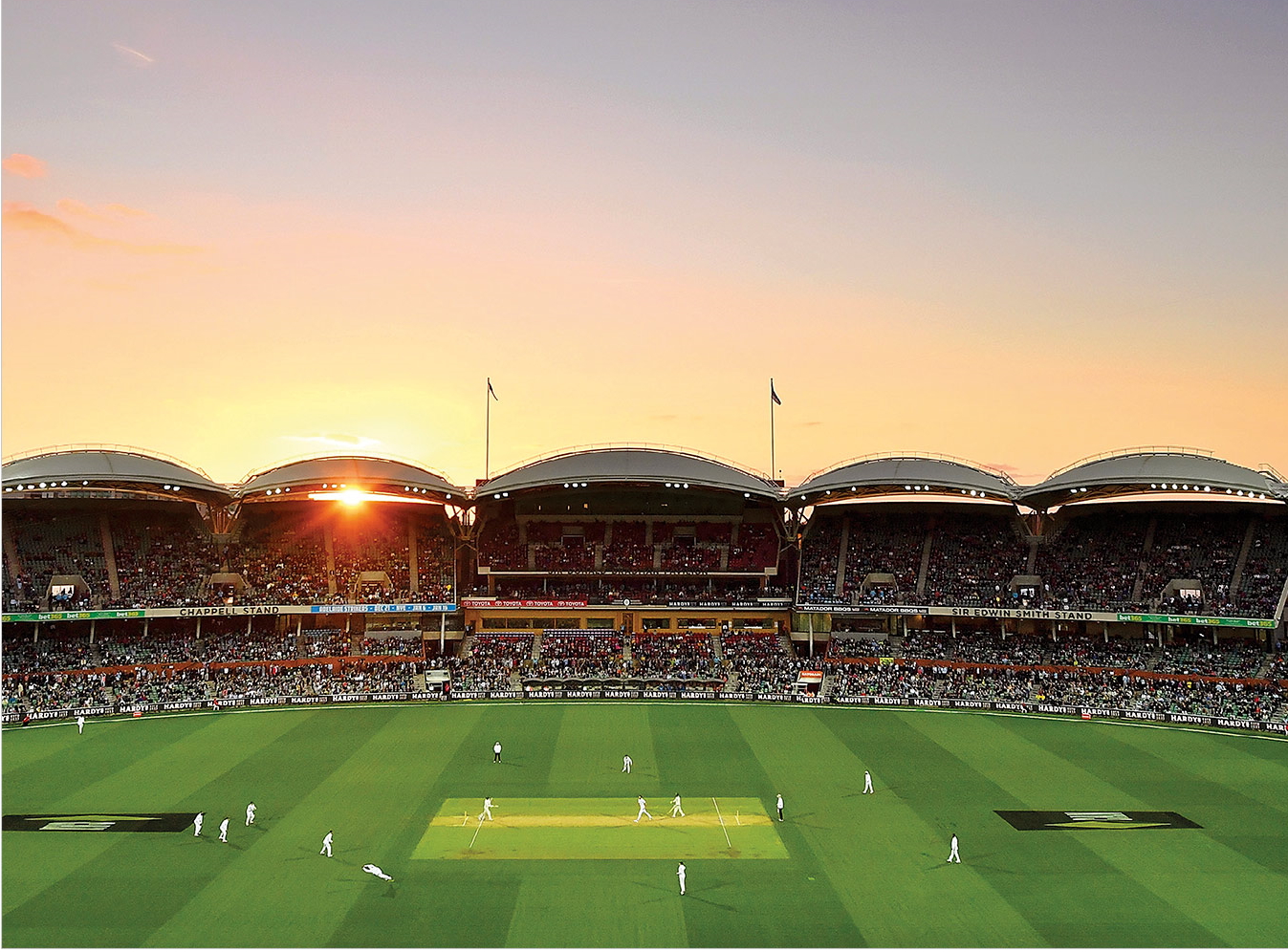 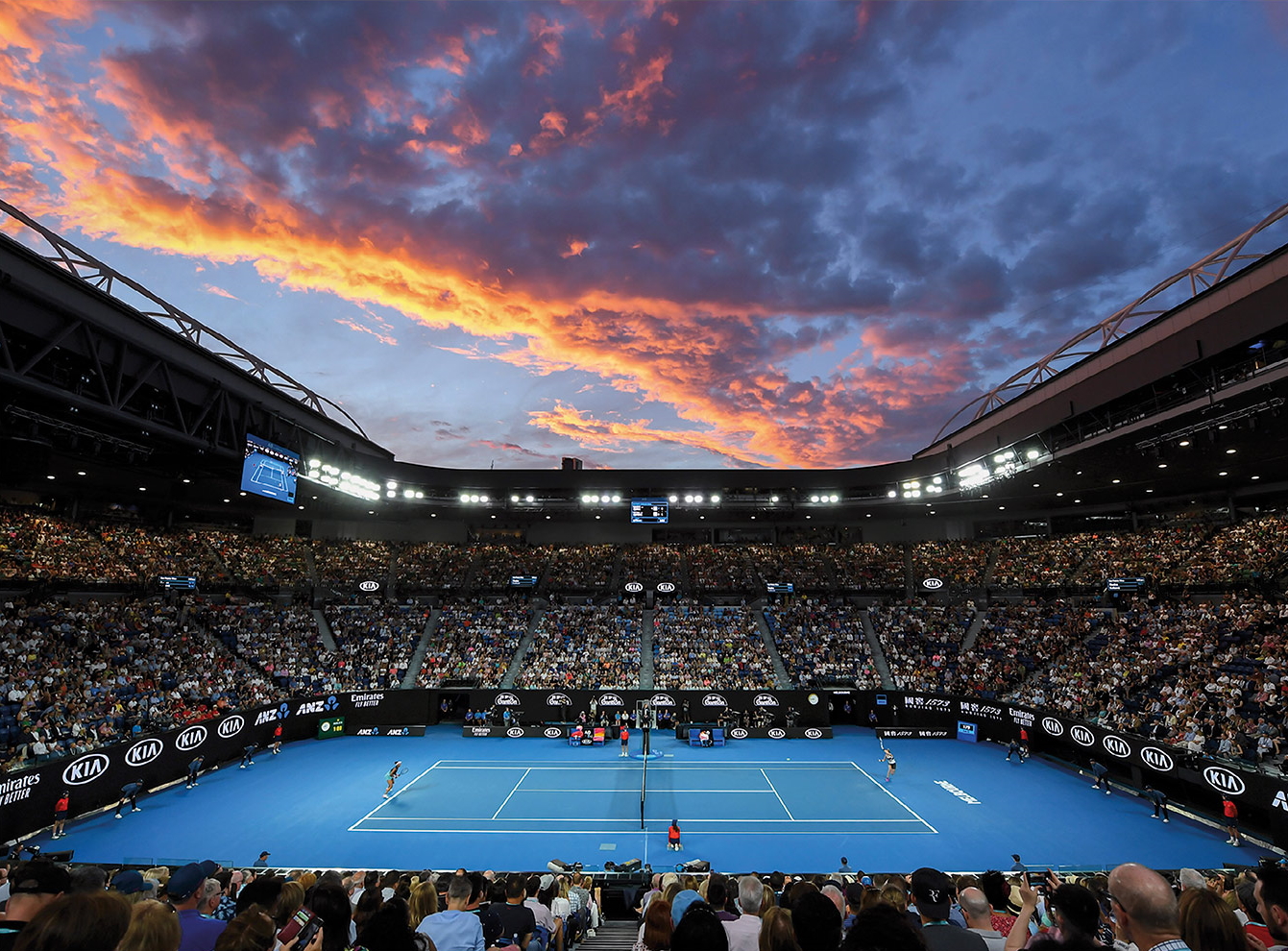