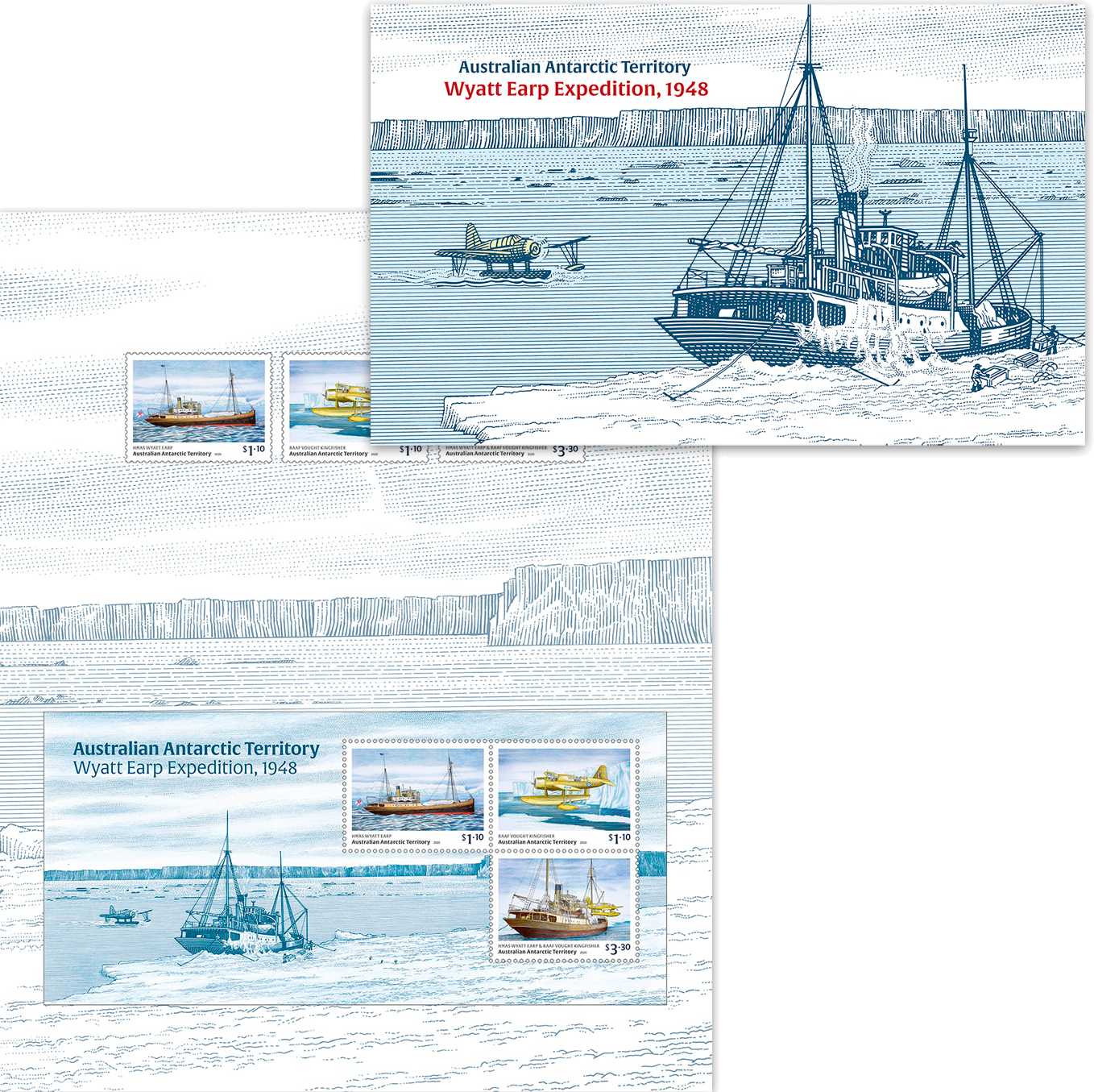 Departing Melbourne on 8 February 1948, the HMAS Wyatt Earp was Australia’s first sea vessel to voyage to Antarctica following World War II. The HMAS Wyatt Earp was requisitioned from the Australian Navy to undertake the first Australian National Antarctic Research Expedition (ANARE). The key aim of the ANARE expedition was to explore sites for a permanent research base in King George V Land, within the Australian Antarctic Territory, established by the transfer of sovereignty from Britain to the Commonwealth government in 1933. Scientific work would be conducted in several fields, coordinated by Senior Scientific Officer Dr Phillip Law.

While extreme weather and pack ice prevented the Wyatt Earp from reaching the Antarctic continent, the Vought Kingfisher floatplane, transported on the deck of the Wyatt Earp, undertook aerial surveying. Scientific observations and recordings were made, thereby securing the future of Australia’s research program. However, the 1948 expedition demonstrated that, despite that Wyatt Earp’s polar record, the ship was too small and underpowered for its role as an Antarctic research vessel.

The stamps and minisheet have been illustrated and engraved by Norwegian artist Martin Mörck, and printed using a combination of traditional intaglio techniques and offset printing. 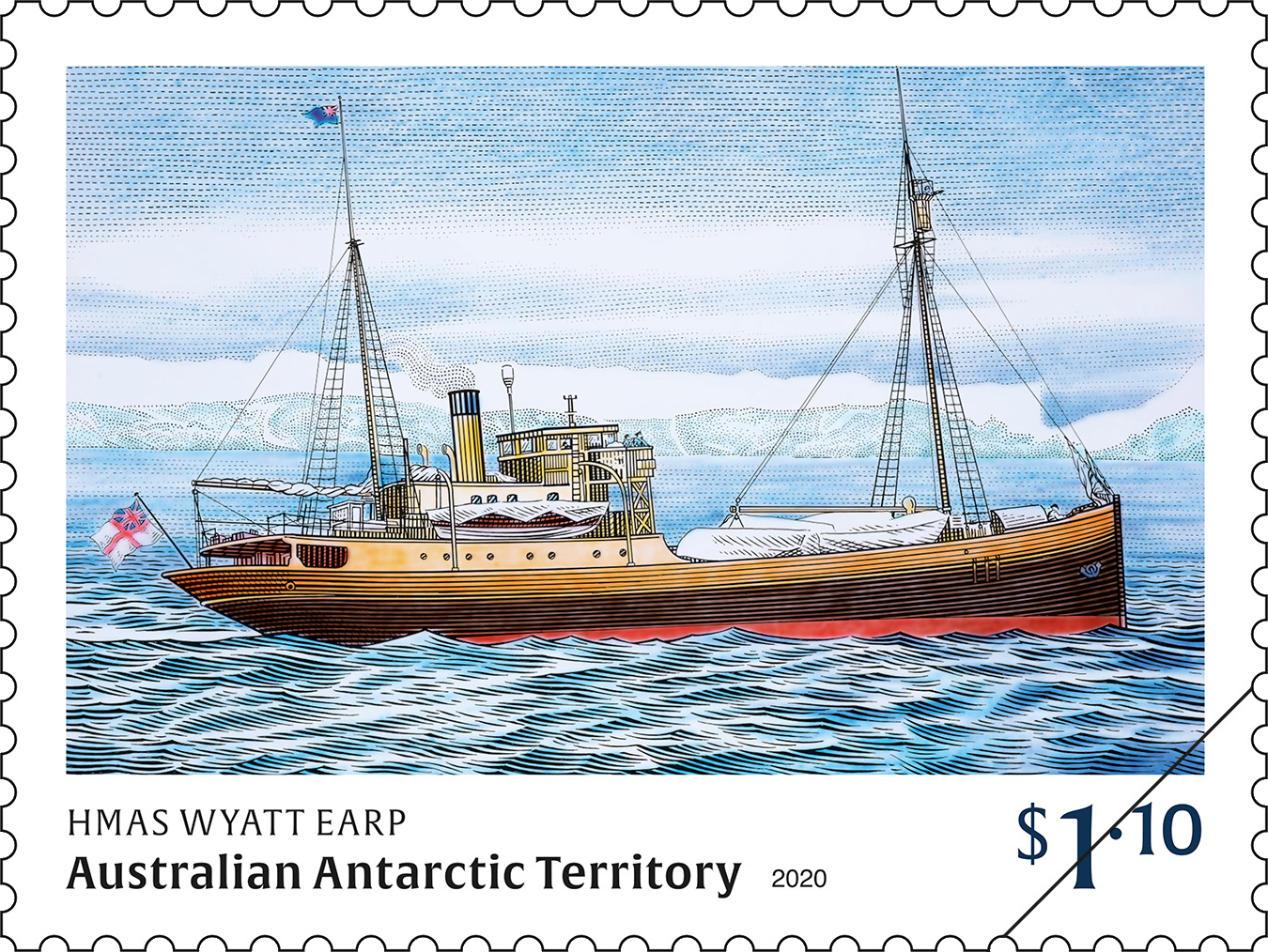 $1.10 – HMAS Wyatt Earp
Built in Norway in 1919 and first named the Fanefjord, the Wyatt Earp was purchased by the Australian Navy during World War II and named HMAS Wongala. The ship was used as an ammunition and stores carrier, and then as a guard support in South Australia. In December 1946, at the urging of Douglas Mawson, the Australian government planned to renew Australian Antarctic exploration and committed to significantly refurbishing the ship. Renaming it HMAS Wyatt Earp, the ship was readied for Antarctic service with the newly established Australian National Antarctic Research Expedition (ANARE) during 1947. 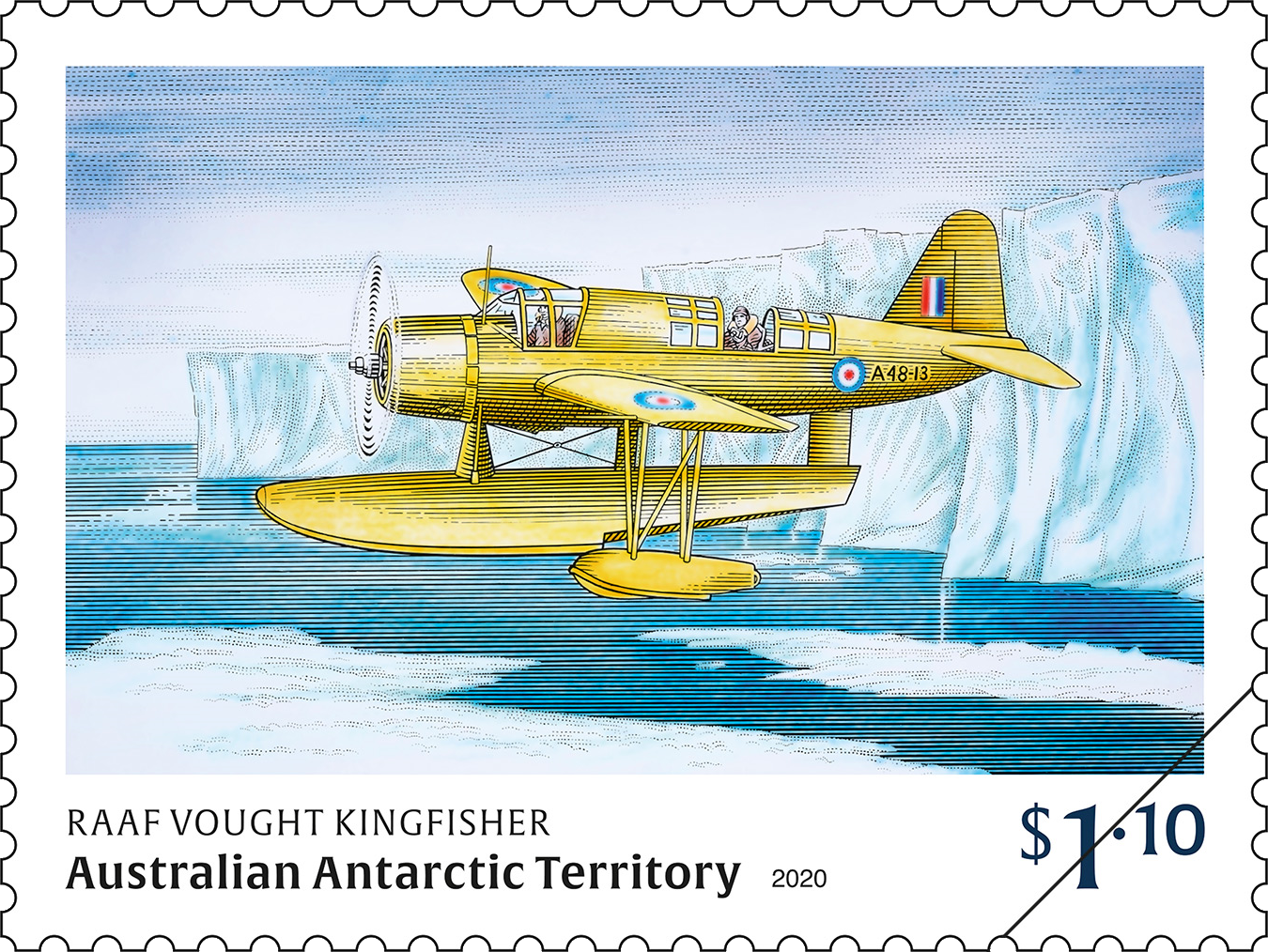 $1.10 – RAAF Vought Kingfisher
The RAAF Vought-Sikorsky OS2U Kingfisher was an observation floatplane with a 450hp engine built in the United States and used during the war. Australia purchased 18 such planes in 1942, including the one registered A48-13, which was used on the ANARE expedition. Some 10.31 metres in length, with a wingspan of 10.95 metres, the Kingfisher was painted yellow and an engine pre-heater was installed before it travelled to the frozen south. The small wooden-hulled Wyatt Earp carried the plane (with its float dissembled) on its deck, so that it could be used in aerial reconnaissance and surveying work. The Kingfisher made two one-hour reconnaissance flights near the Ninnis and Mertz glaciers, King George V Land, on 13 March 1948, before the expedition headed to the Balleny Islands. 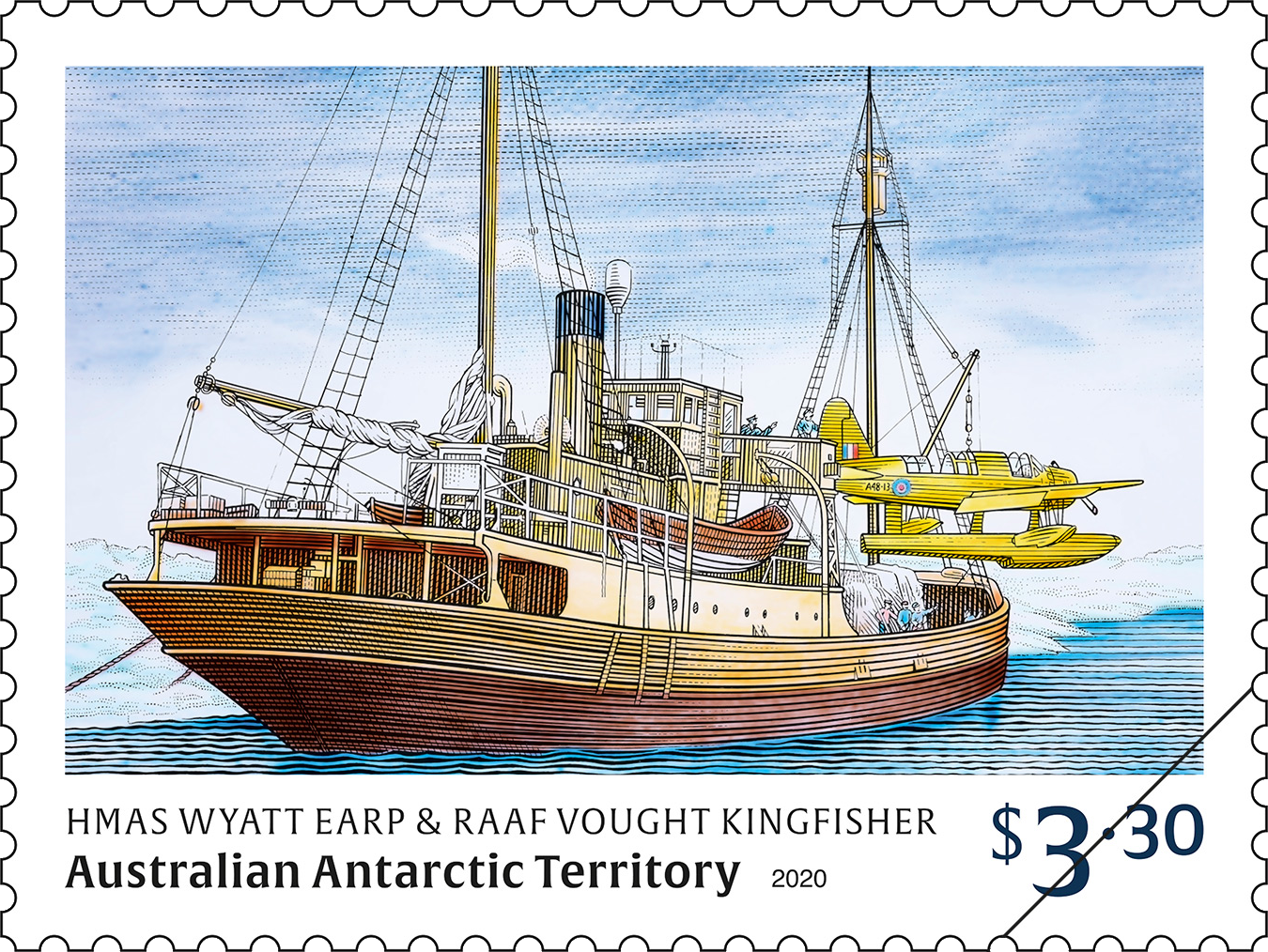 $3.30 – HMAS Wyatt Earp & RAAF Vought Kingfisher
This stamp design shows the relationship between the Wyatt Earp and the Kingfisher, with the latter suspended before being lowered into the water.

The AAT: Wyatt Earp Expedition, 1948 minisheet consists of the three stamps from the issue incorporated into a miniature stamp sheet.

Intaglio and the Incredible Art of Stamp Engraving

The stamp and minisheet design for the AAT: Wyatt Earp Expedition, 1948 stamp issue, which will be released on 31 March 2020, is a beautifully rendered scene that depicts the HMAS Wyatt Earp during the first of the Australian National Antarctic Research Expeditions (ANARE) in 1948, together with the RAAF Vought Kingfisher, an observational floatplane that was carried on board the Wyatt Earp, before being lowered into the water and completing two one-hour reconnaissance flights. The Wyatt Earp was unable to reach the icy continent, due to the pack ice and the vessel’s technical limitations, but the information collected and observations made by scientists during both the voyage and survey flights meant the expedition was not a failure. 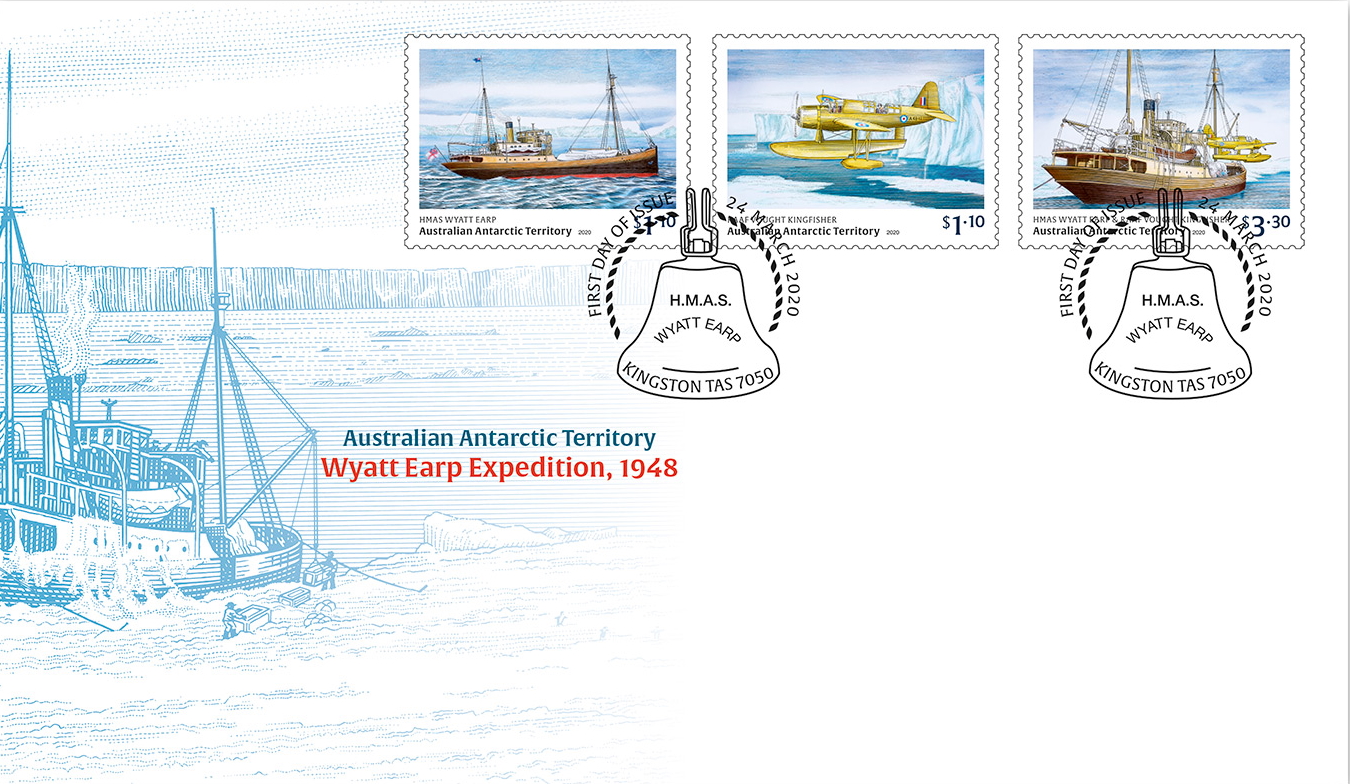 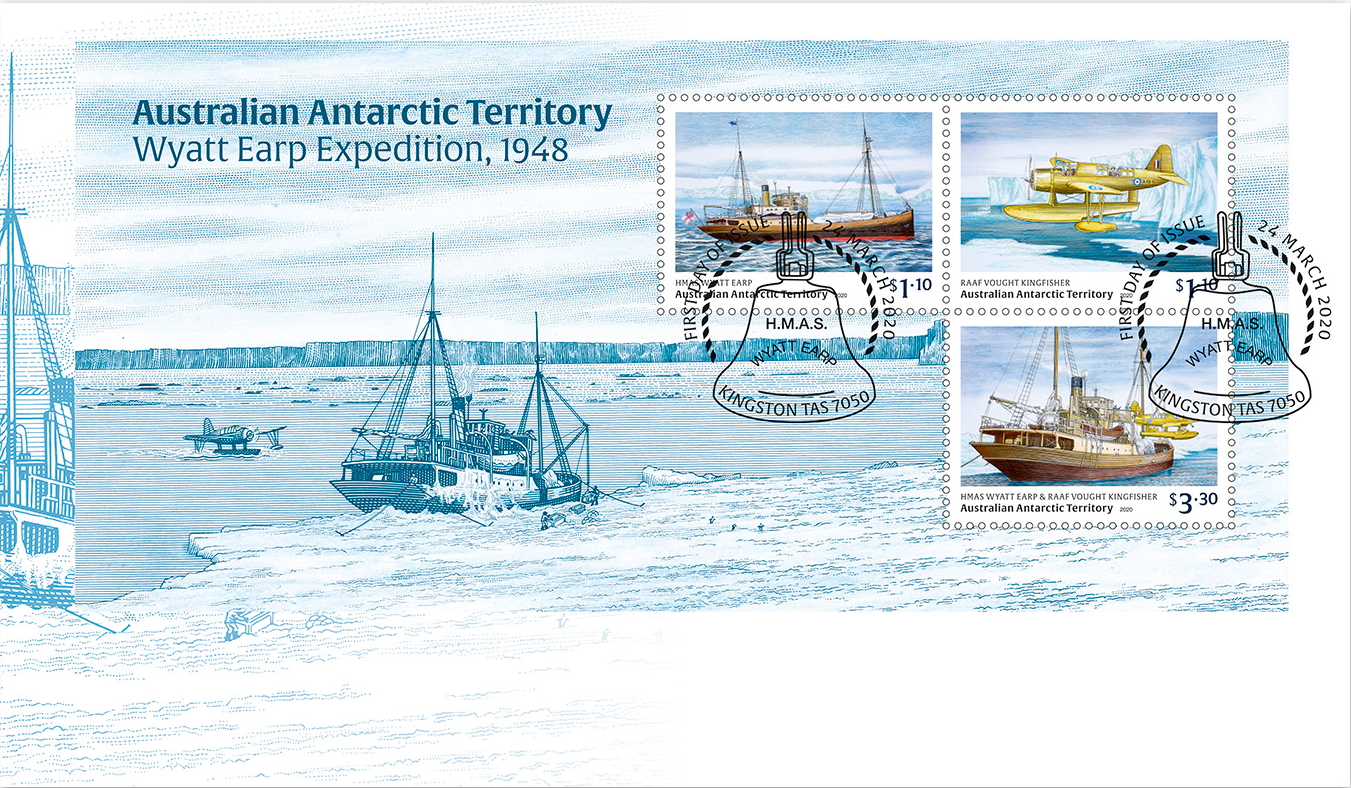 The stamps and minisheet have been illustrated and engraved by Norwegian artist Martin Mörck (pictured above), and printed using a combination of traditional intaglio techniques and offset printing. Mörck has produced more than 900 stamps, which contain more than 670 engravings, for numerous postal administrations in his 45-year career. He also works internationally in the field of banknote engraving.

Traditional intaglio involves printing an image made up of lines and dots that have been etched or engraved, by hand, onto a softened steel die using a tool known as a burin. The hardened die is then transferred, in stages, to a steel printing cylinder plate of multiple images. The printing cylinder plate is then inked, and then the excess ink wiped off, with the remaining ink filling the recessed grooves. The plate is forced against the paper under considerable pressure, the ink being sucked out of the grooves and onto the paper.

Today, however, production techniques have evolved. More than a decade ago, banknote engraving became digitalised. This meant that a precisely rendered pen and ink line drawing (that would have previously been produced by a burin on a steel die), was digitally scanned and sent to a laser engraving machine, which would cut the lines directly into the printing cylinder. This then progressed to all line work being drawn digitally on a screen by the artist, before being sent directly to a laser machine (a CTP machine, which translates to “computer to plate”), to produce the engraved printing plate. It took longer for the stamp world to progress to this technology, but now most postal administrations adopt this approach to intaglio printing, with France and Monaco being notable exceptions.

For this stamp issue, Martin Mörck began with small-sized drawings for the design, before producing a set of large-scale pen and ink drawings, to meet the requirements in relation to the line widths and spacing of the digital engraving. The drawing was then scanned and transferred directly to the laser CTP machine. The printing process was the responsibility of renowned specialty stamp printing company, Cartor, France. The evidence of Mörck’s intricate work is present in the beautiful line work visible throughout the designs. 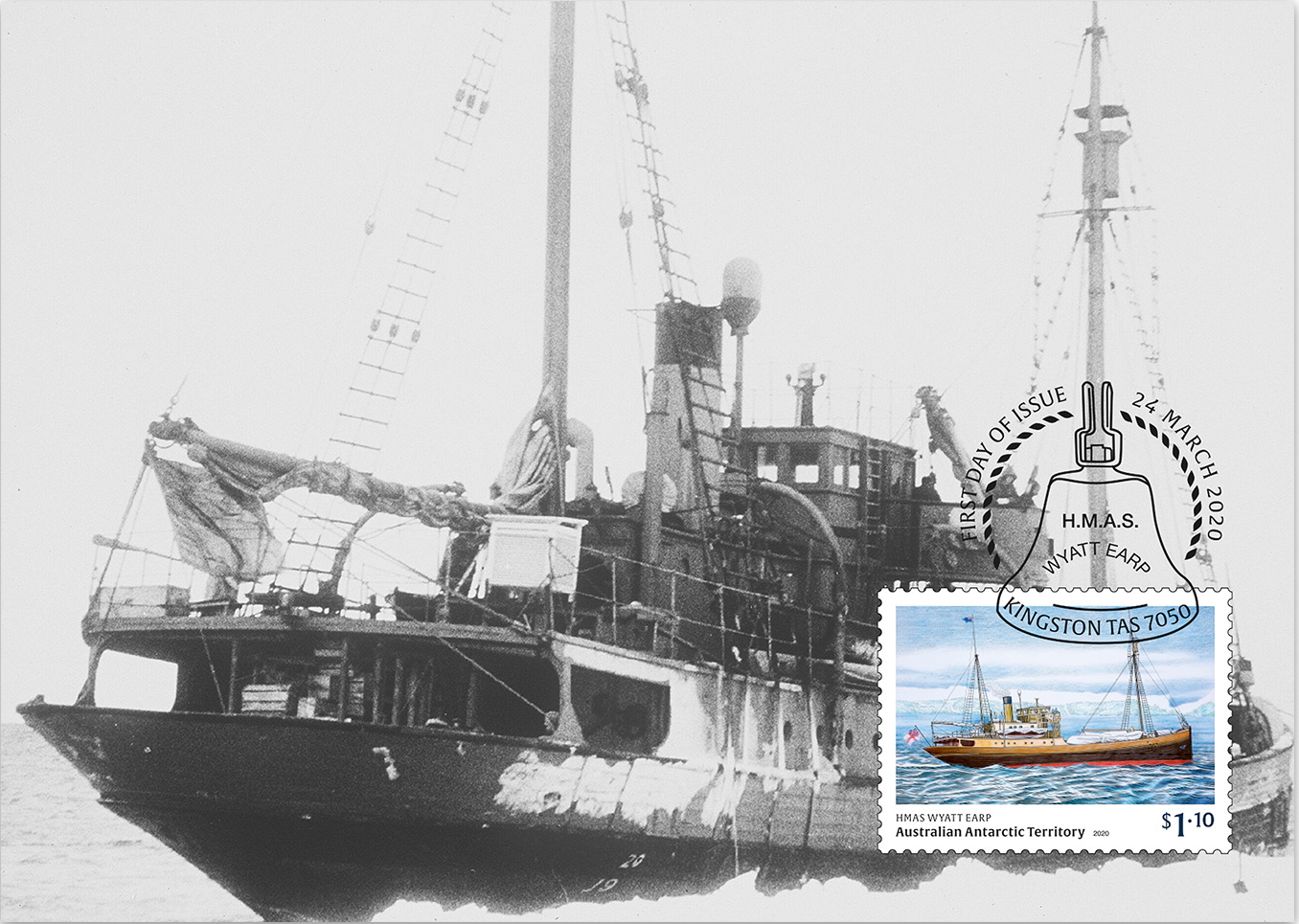 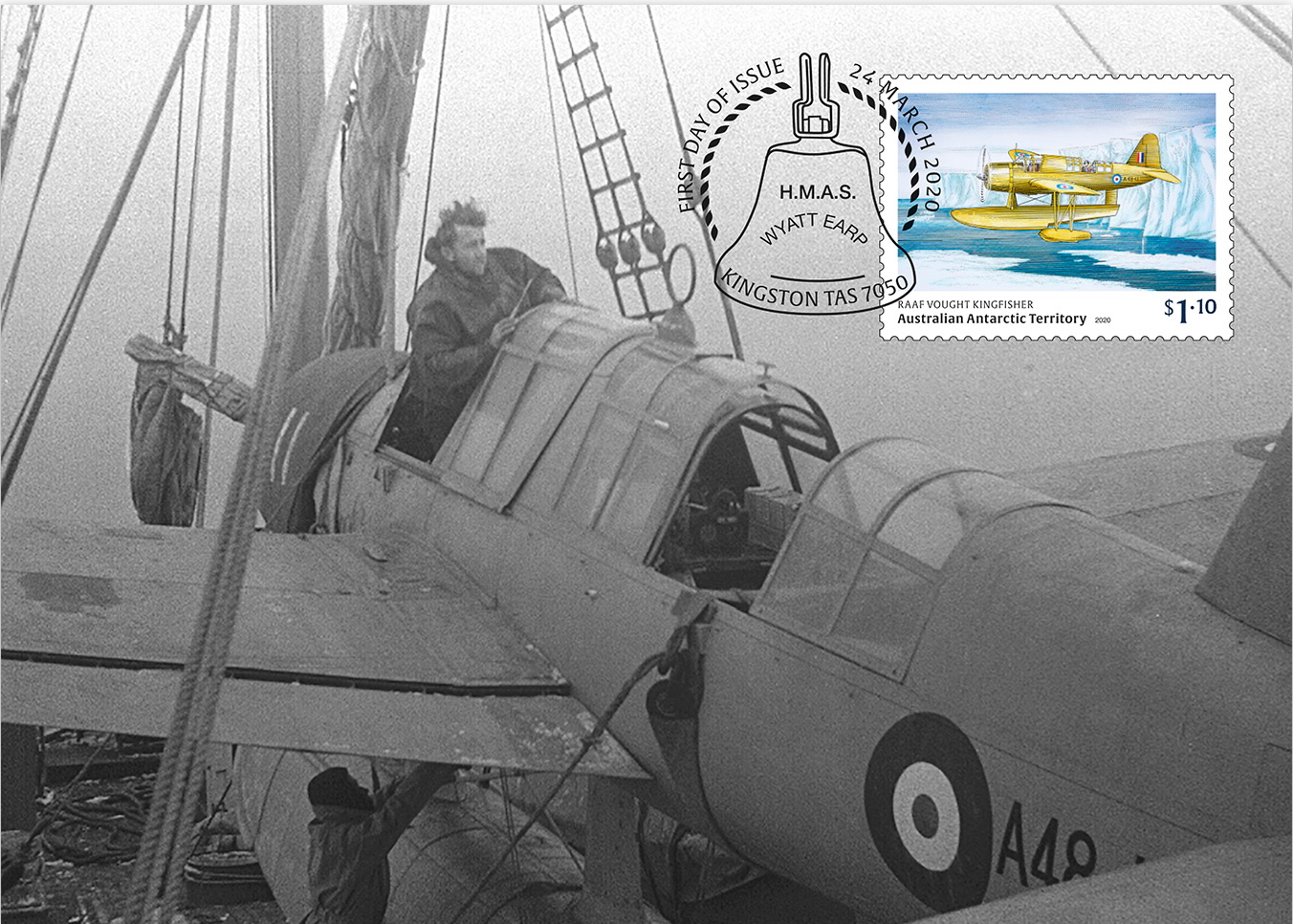 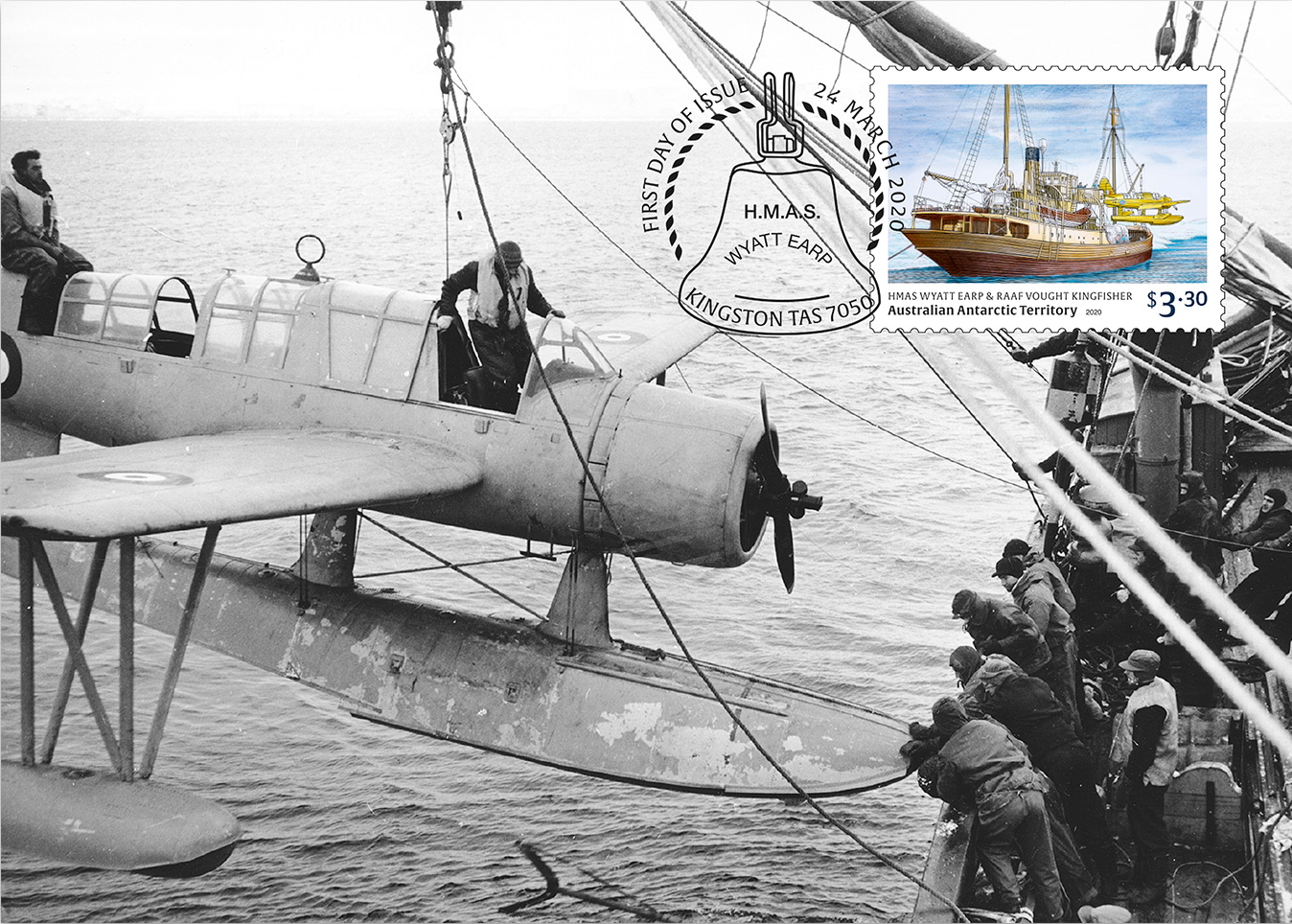 The last time Australia Post released an engraved stamp issue, in this case hand-engraved and printed wholly in intaglio, was in 2001. The issue, a joint issue between Australia and Sweden, was engraved by legendary stamp engraver Czeslaw Slania, who passed away in 2005 after a 55-year career. The stamp theme honours the 18th-century Swedish botanist, Daniel Solander, who accompanied Captain Cook on the Endeavour (1768–71). Slania also engraved four Australian stamps in 1994 Aviation Feats, which depicted the achievements of early Australian aviators.

While Slania hailed from Poland, Australia also produced several highly skilled stamp engravers of its own, who for years (specifically, from the 1930s to the 1970s) engraved the original steel dies used to print stamps via the traditional intaglio method, although sometimes part of the design was engraved using machinery. During this time period, around 30 billion Australian stamps were printed by intaglio. By 1973, intaglio had been replaced by multi-colour photogravure printing, and then again by offset lithography, the four-colour CMYK printing technique used for Australian stamps today.

Some of the key engravers during this “golden age” of Australian intaglio stamps include Thomas Harrison (1862–1934), who also managed the Note Printing Branch, Melbourne, and his son Ronald Harrison (1891–1968). Perhaps the best known is Frank Manley (1894–1976), who was recruited from England in 1929 to work as the chief artist and engraver in the Note Printing Branch. During his 30-year career, Manley designed and/or engraved numerous stamps for Australia and its territories. In fact, during the 1930s and 40s, he was responsible to engraving virtually every stamp die.

The postwar years brought a new wave of apprentice engravers, who trained for several years under Manley. The youngest, Peter Morriss and Bruce Stewart, joined the Note Printing Branch at age 16. Despite being told by Manley that he would need to train for seven years, at age 18 Morriss was allowed to engrave one stamp in the 1952 Papua New Guinea definitive series, making him most likely one of the world’s youngest stamp engravers ever. 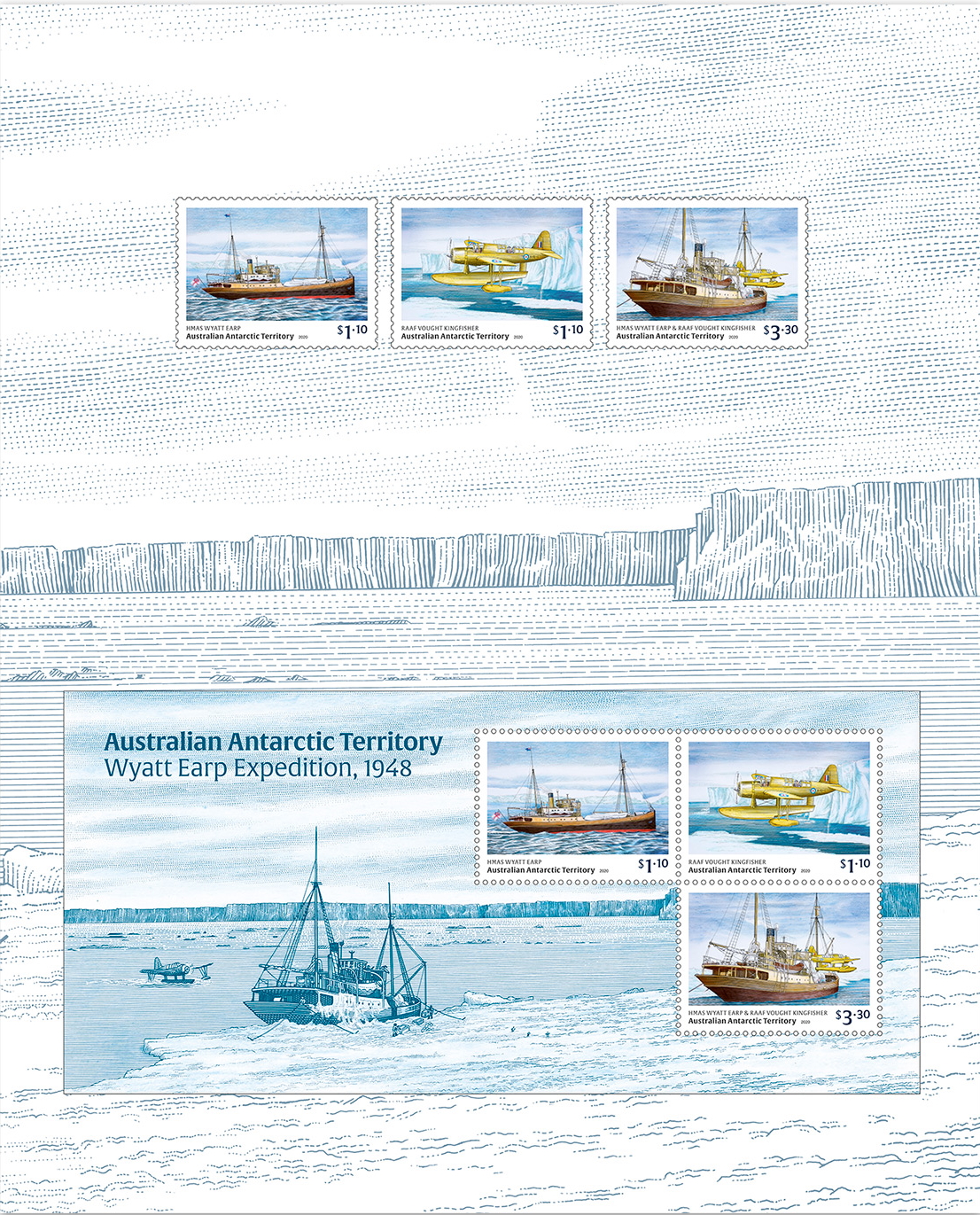 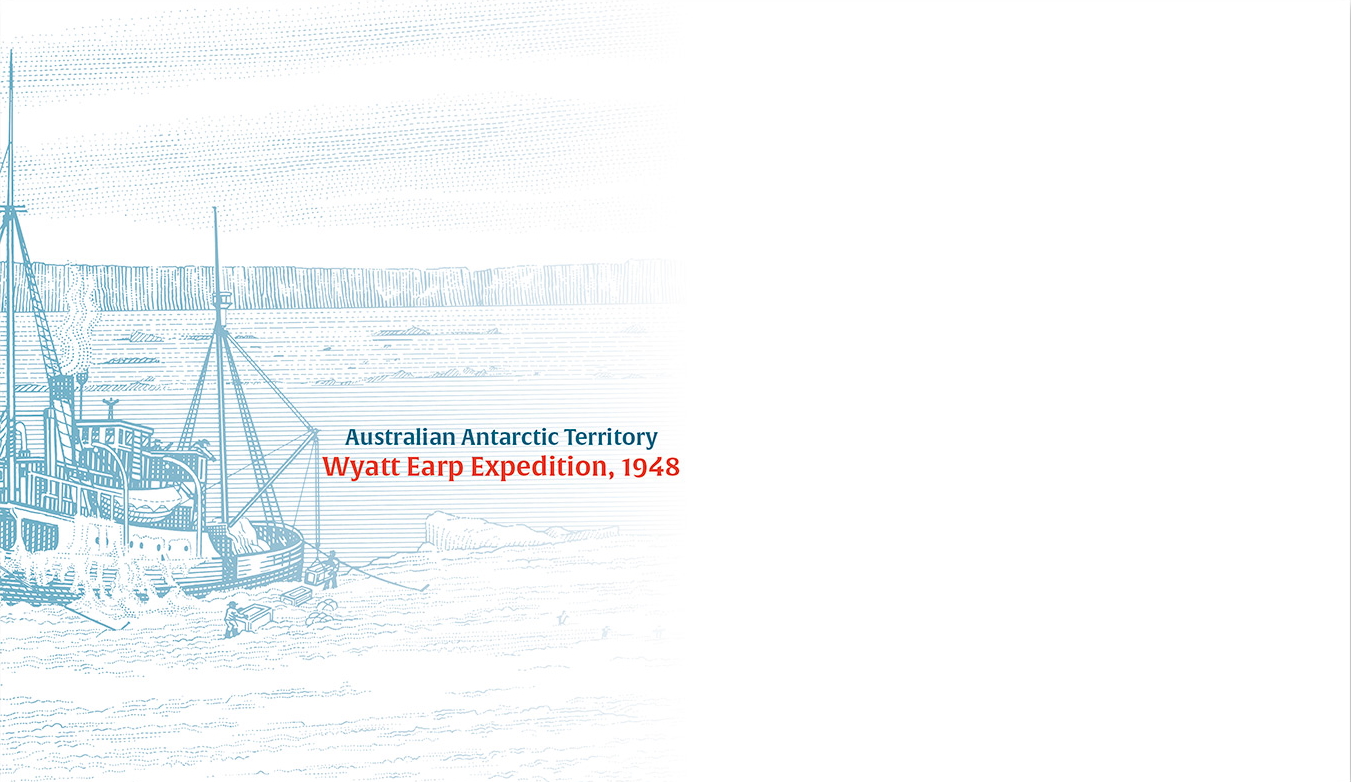 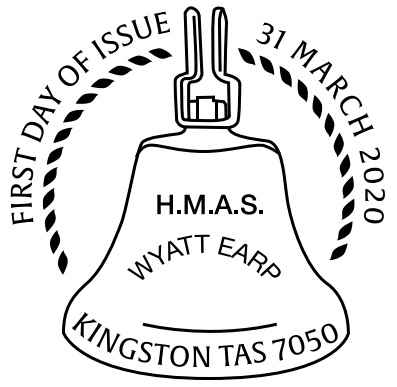