Cities of Serbia — Kruševac and Čačak

Kruševac
Kruševac is a city of exceptionally rich cultural and historical heritage. History in this city began to be written back in 1371, when Prince Lazar built Kruševac, choosing it for his capital.

Within the complex of Lazar’s Town, there is the Lazarica Church, which was dedicated by Prince Lazar to the Archdeacon and Martyr Stefan, the patron saint of the Nemanjić dynasty, and in honor of his firstborn son Stefan. There, the Serbian army took communion before going to the Battle of Kosovo. Not far from it, on the Square of Despot Stefan, a monument to Princess Milica by Zoran Ivanović, an academy-trained sculptor, was erected in 2018. 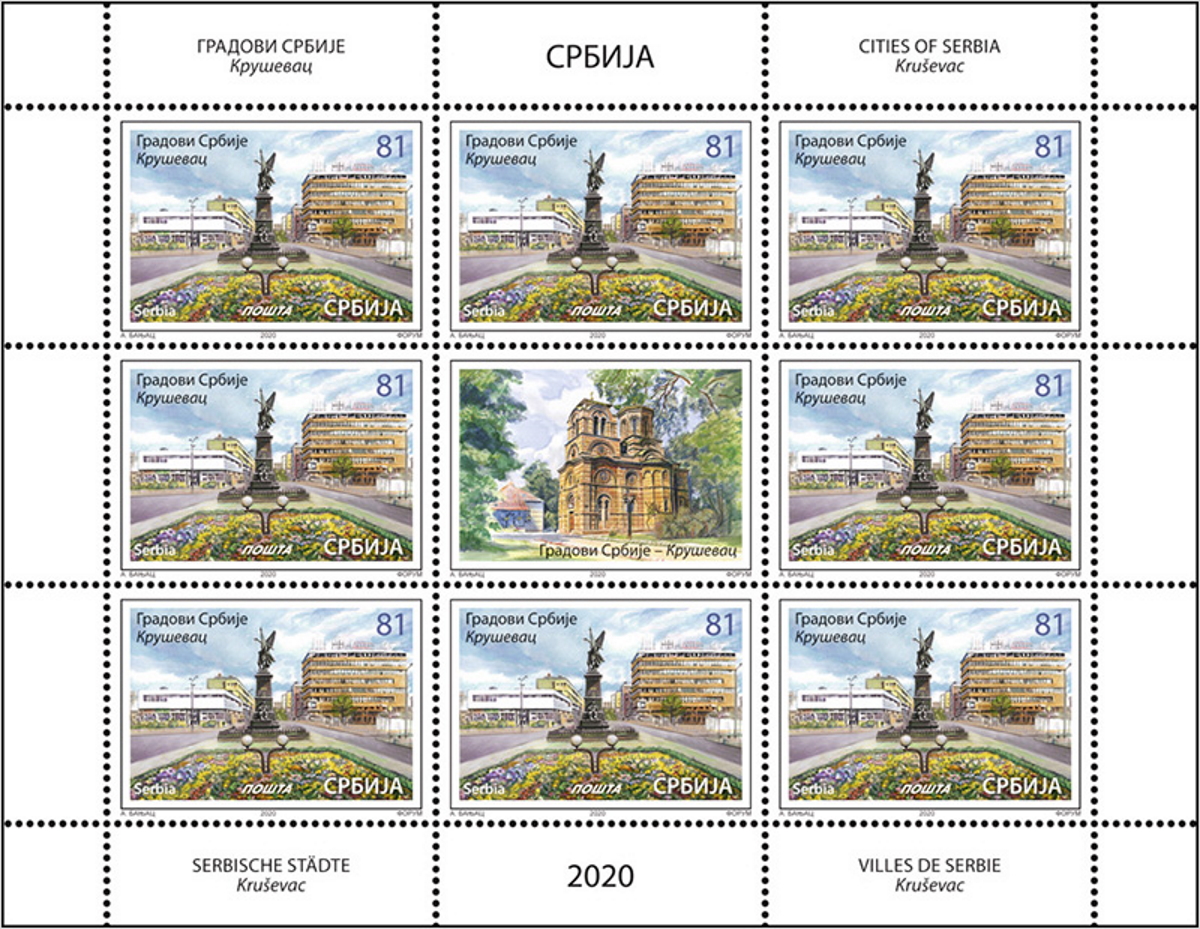 The City Government building (Načelstvo) with its magnificent interior represents one of the most beautiful architectural works from the beginning of the 20th century located in Kruševac. Mosaic Complex In Honour of Kruševac – the work of Mladen Srbinović inspired by the medieval history of Serbia, which adorns the premises of Načelstvo, consists of the wall and floor mosaics, stained glass windows and lunettes in the ceiling niches.

One of the oldest buildings in Kruševac is the Simić House, built before 1833, known as the place where Mileta’s rebellion was arranged. The centre of Kruševac is dominated by the symbol of the city – the Monument to the Kosovo Heroes, by sculptor Djordje Jovanović, which was awarded the Gold Medal of I Order at the 1900 Paris Universal Exhibition.

A memorial complex dedicated to the people from Kruševac and the surroundings who were shot in World War II – Slobodište, is located in the southern outskirts of the city. In the immediate vicinity of the town there is the Jastrebac Mountain, whose highest peaks Đulica (1491m) and Pogled (1481m) represent the natural boundary between Toplica and Pomoravlje regions. 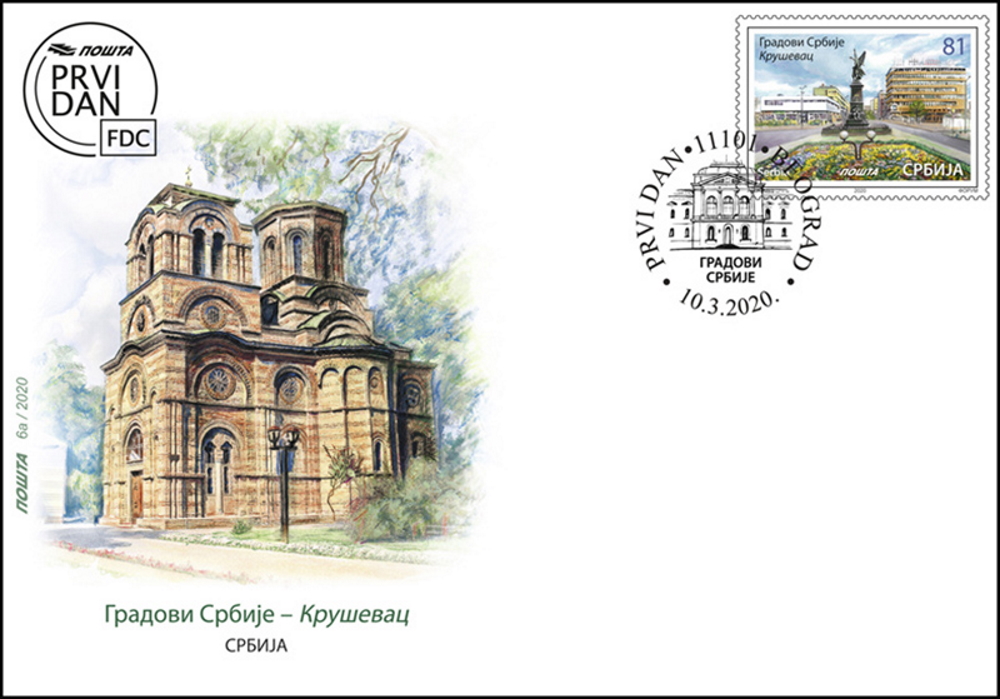 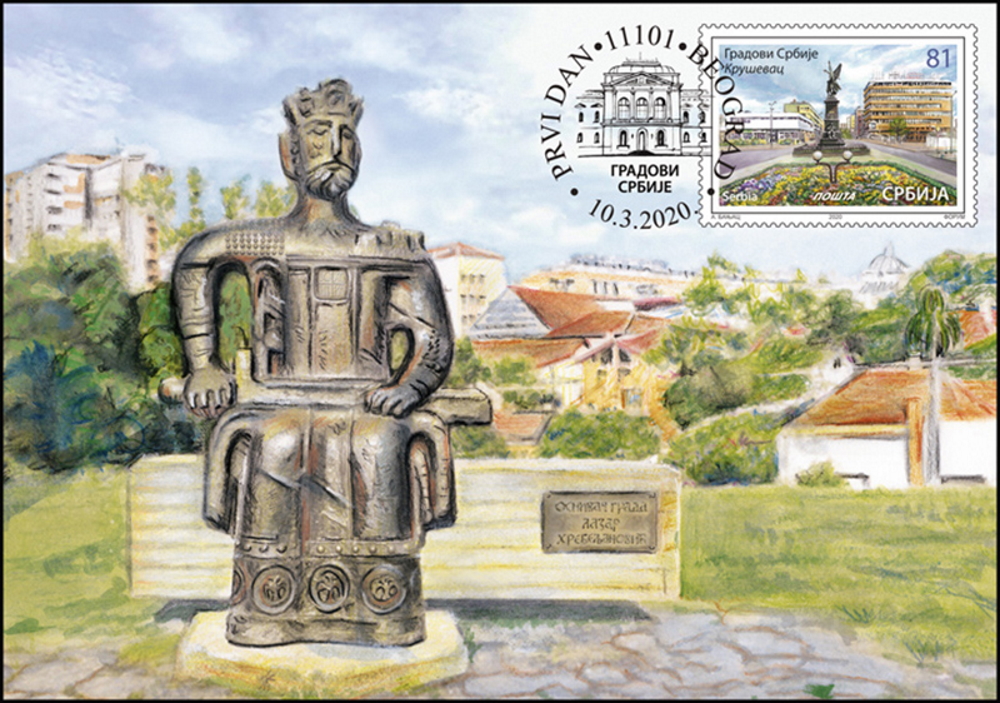 Ribarska Spa near Kruševac is one of the first Serbian spas, and due to numerous visits of the royals, it is still called the Royal Spa. Its most frequent guest was King Peter I, who found a cure for gout there.

The city of Kruševac is a member of the International Association of Peace Messangers Cities and the only city in the world to receive the “Messanger of Peace” and “Peace Medal” recognitions. The Monument to Peace, unique in the world, was erected in Kruševac.

Expert collaboration: Tourist Organization of the City of Kruševac. 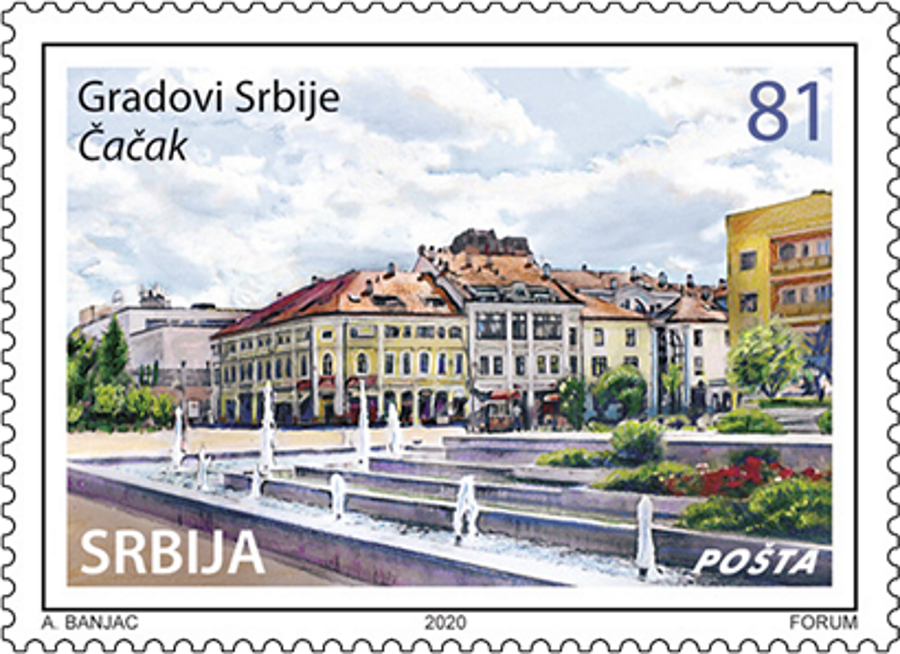 Čačak
Čačak is one of the biggest cities in Serbia, with a recognizable architecture and rich monumental heritage. There are numerous cultural monuments in Čačak, as well as sacral buildings and cultural institutions of national significance – the National Museum, the Church of the Ascension built in XII century and Artistic Gallery “Nadežda Petrović“. Also, famous archeological sites and cultural and historical monuments in Čačak are Roman spas and memorial complex on Ljubić Hill – the monument dedicated to the warriors of the First World War – The Four Faiths.

There are interesting and attractive tourist destinations in the Čačak area. Ovčar – Kablar Gorge – a region of exquisite features, a landscape with relief rich in river flows, lakes and diverse flora and fauna, medieval monasteries, thermo mineral springs of Ovčar Spa. Striking massifs of Ovčar and Kablar where West Morava river makes meanders, are recognizable symbols of this area. Atomic spa Gornja Trepča, a genuine pearl and of one of the main destinations of health tourism in Serbia, is located near the city of Čačak. 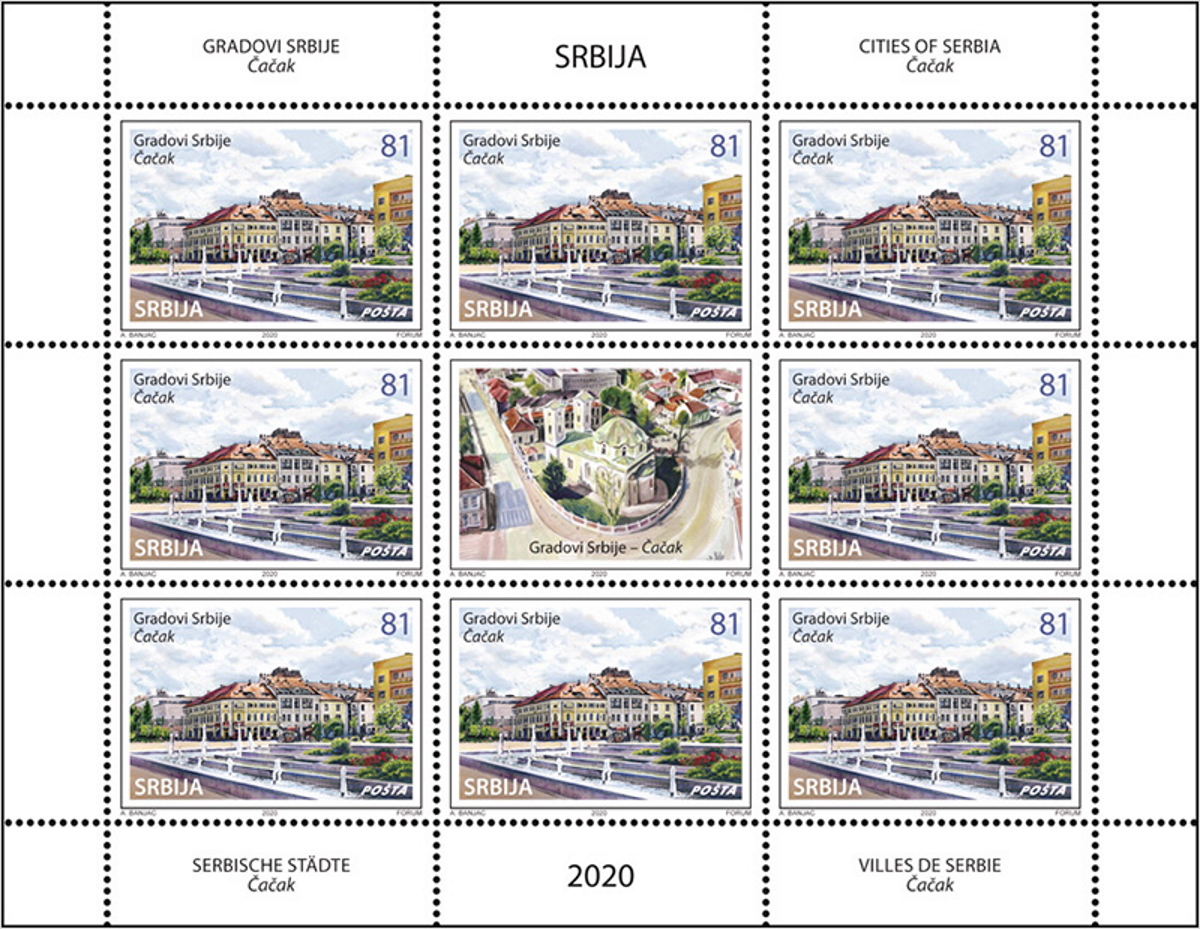 Being famous for exceptional gastronomic offer, numerous catering facilities and quality accomodation, Čačak is a city where a lot of events take place throughout the year. Čačak is also a city of sport, especially basketball, being the host to a great number of sporting events on a regular basis.

The city of Čačak with its surroundings has a rich cultural and historical heritage and numerous natural resources, which make it one of the most attractive destinations in the tourist region of Western Serbia. 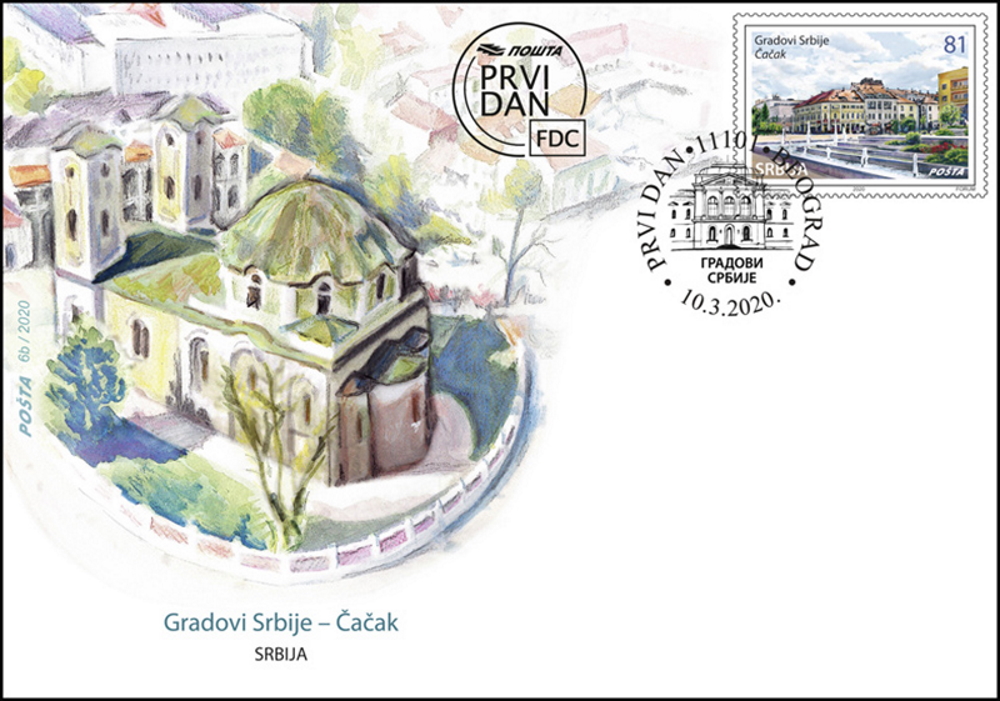 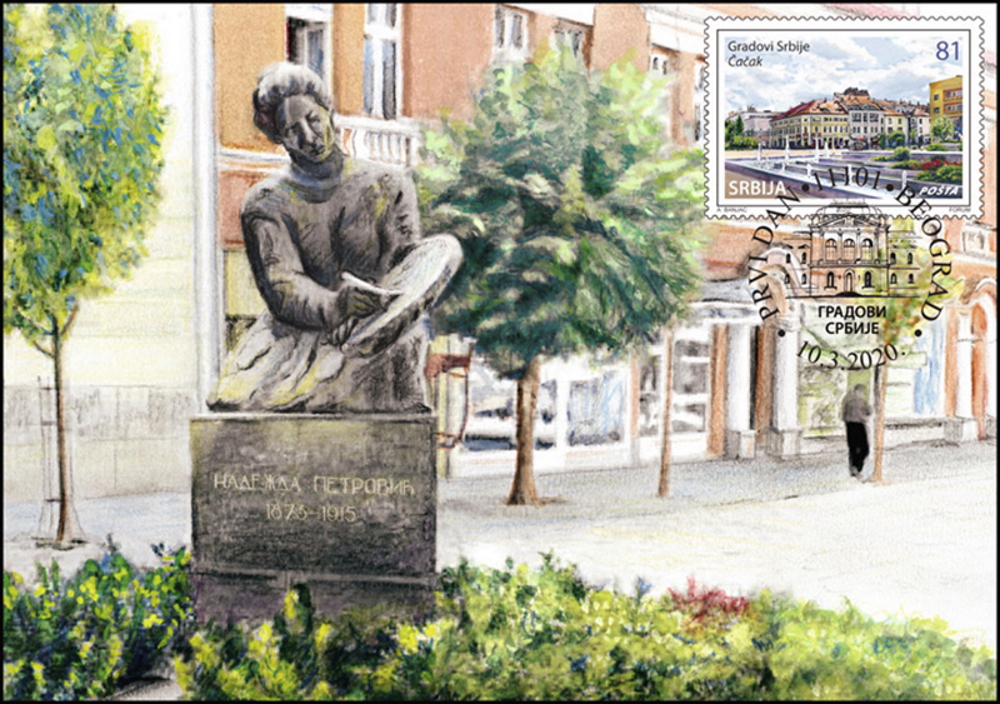 On the stamp: A Square with a Fountain; on the vignette and envelope: The Church of the Ascension; on the maximum card: The Monument to Nadežda Petrović.

Expert collaboration: Tourist Organization of the City of Čačak. 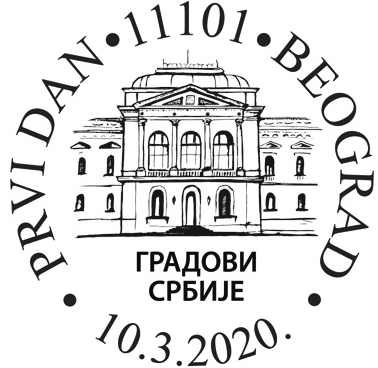