Heroes in the Defense of Donetsk Airport

Stamp “They survived! The concrete did not withstand!”

Face value of the stamp – V (corresponds to the tariff of sending ordinary letter up to 50 gr within Ukraine).
Size of the stamp – 28х40 mm.
Number of stamps per sheet – 9 (3х3).
Size of the stamp sheet – 135х152 mm.
Printing run of the stamp – 130 000.
Barcode – 4823027147079.
Order 19-3686. 12/04/2019; inscriptions: “The heroic defense of the Donetsk airport, which became a symbol of invincibility and bravery of the Ukrainian military, lasted from May 2014 to January 2015. For their courage and incredible resilience bordering on the physical capabilities of the common man, Ukrainian defenders were called“ cyborgs ”.
Artist of the stamp and postmarks – Andrii Yermolenko.
The stamp is multicolored; printing process – offset.
The stamp is printed by SE “Integrated Printing Plant “Ukraina” for Production of Securities”. 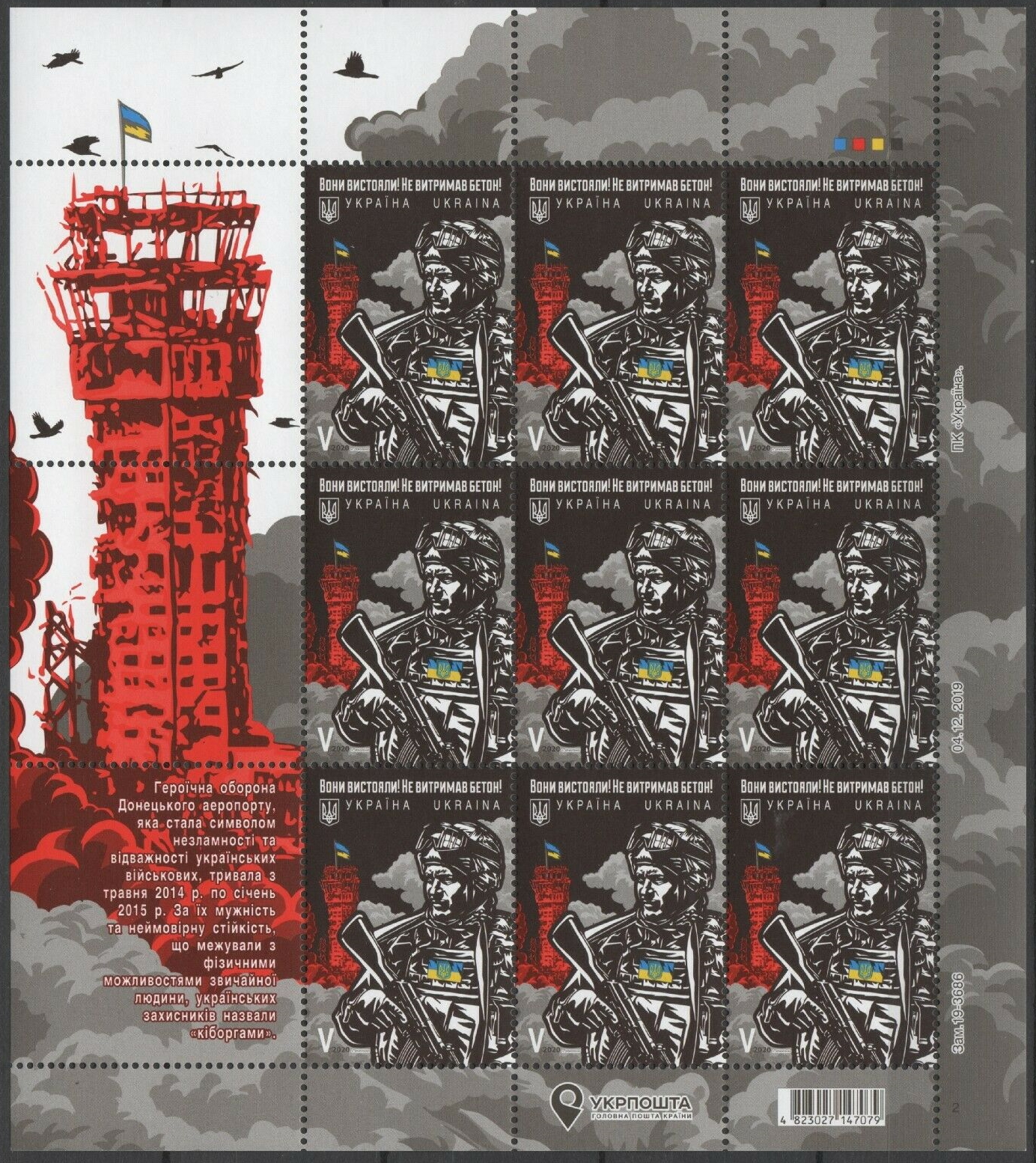 Donetsk Sergei Prokofiev International Airport (Міжнародний аеропорт “Донецьк”), located 10 km (6.2 mi), northwest of Donetsk, Ukraine, was destroyed in 2014 during the War in Donbass. It was built in the 1940s and 1950s and rebuilt in 1973 and again from 2011 to 2012. The airport is named after 20th-century composer Sergei Prokofiev, who was a native of Donetsk Oblast.

On 26 May 2014, separatists from the Donetsk People’s Republic with technical assistance from Russian mercenaries seized the airport soon after Petro Poroshenko won the 2014 Ukrainian presidential election. In response, Ukrainian forces launched air attacks to regain control of it from the belligerents. Two civilians and 38 combatants were reported dead, and the Ukrainian military regained control of the airport. Service at the airport has not resumed since the battle. 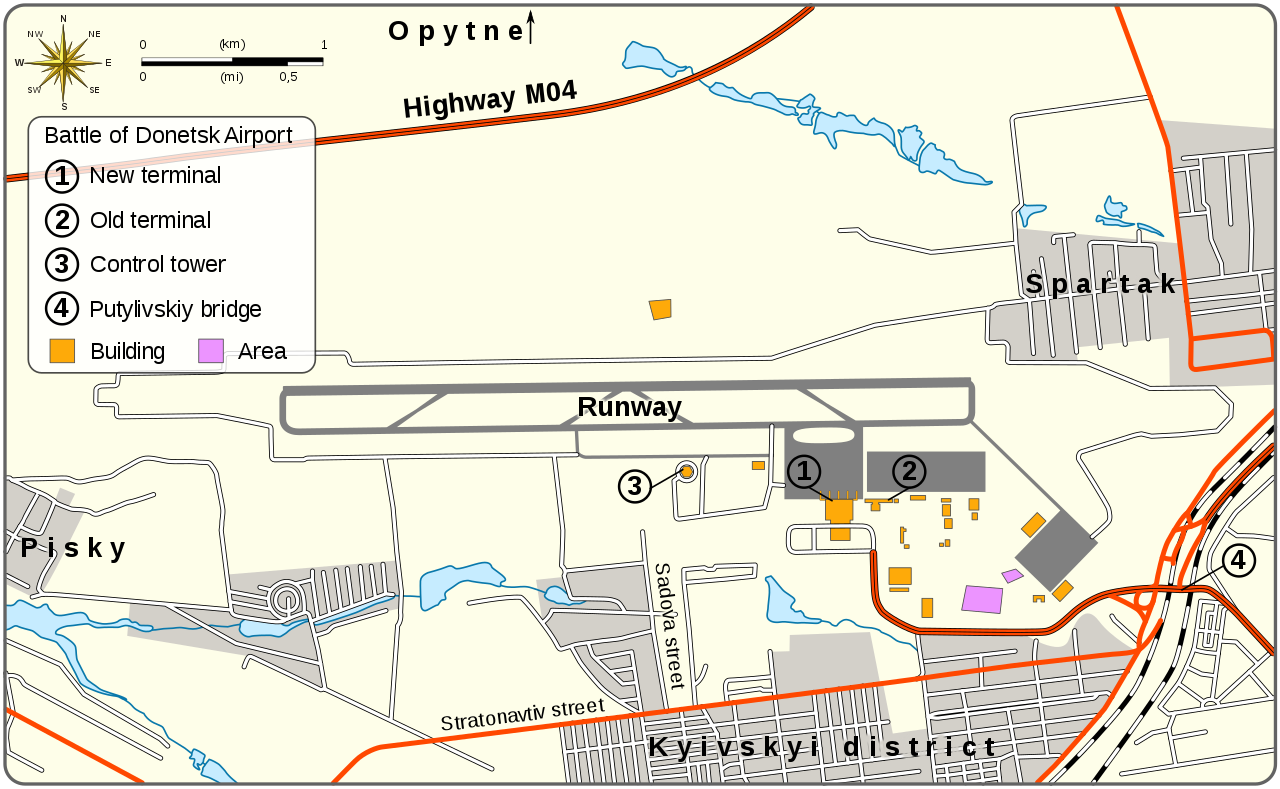 Sporadic skirmishes between DPR and Ukrainian forces continued at Donetsk International Airport following the signing of the Minsk Protocol on 5 September 2014. In late September, these minor incidents grew in frequency. Shelling and machine gun fire in the vicinity of the airport were reported on 23 September. According to one anonymous DPR intelligence officer who was interviewed on 25 September, “When they shoot, we reply to show them we’re here. They are very well armed inside. They have T-64 tanks and multiple rocket launchers. We don’t have what we need to get them out”. He also said that Donetsk airport was a “terrible headache” for the DPR. The airport lies to the north of insurgent-controlled Donetsk city proper, and provides a “convenient vantage point” for Ukrainian forces, allowing them to target DPR positions in Donetsk with artillery fire. “Tit-for-tat” exchanges between the parties to the conflict grew more serious in the days following 25 September.

Fighting between separatist forces affiliated with the Donetsk People’s Republic (DPR), and Ukrainian military and volunteer forces broke out at Donetsk International Airport on 28 September 2014, sparking the Second Battle of Donetsk Airport. At the start of the battle, the airport was the last part of Donetsk city held by government forces, and it lies between the separatist and Ukrainian lines of control. Heavy fighting over the airport continued into the new year, with some of the worst fighting having taken place in January 2015. On 21 January, DPR forces overran the government’s positions at the airport. The remaining Ukrainian forces were either killed, forced to retreat, or captured.

Over the course of battles for the airport, the airport complex suffered extensive damage from constant bombardments and change of hand between pro-government and proxy forces. The main terminal buildings, with their sturdy concrete construction, served as garrisons and shelters for soldiers defending the airport grounds, and as a result the buildings would be subjected to attacks and suffer extensive structural failures, most notably with the collapse of the massive roof over the new terminal building’s mezzanine. Similarly, the control tower was contested by opposing forces due to its strategic lookout point, but eventually collapsed in January 2015 during the final leg of the Second Battle of Donetsk Airport.

Since the fighting, the ruins of the airport have been cleared of rubble, leaving behind the concrete shells of the new terminal building and adjoining parking garage.

During the battle, the word cyborg (кіборг) was used to refer to the Ukrainian defenders of the airport. It was first applied to these soldiers online, and spread from there into the Ukrainian media. It refers to the way that the airport defenders were able to fend off constant attacks by DPR forces in close quarters with little sleep or support, just as science-fiction cyborgs are “indestructible half-men, half-machines”, or “superhuman”. The cyborgs have become part of Ukrainian national mythos, and are cast in a “near-legendary light” amongst many Ukrainians. The term “cyborg” is usually applied to the following units: 3rd Spetsnaz Regiment, 93rd Mechanised Brigade, 79th Airmobile Brigade, 17th Tank Brigade, and the Right Sector volunteer battalion.

Annually on 16 January Ukraine celebrates the Memorial Day of Cyborgs. 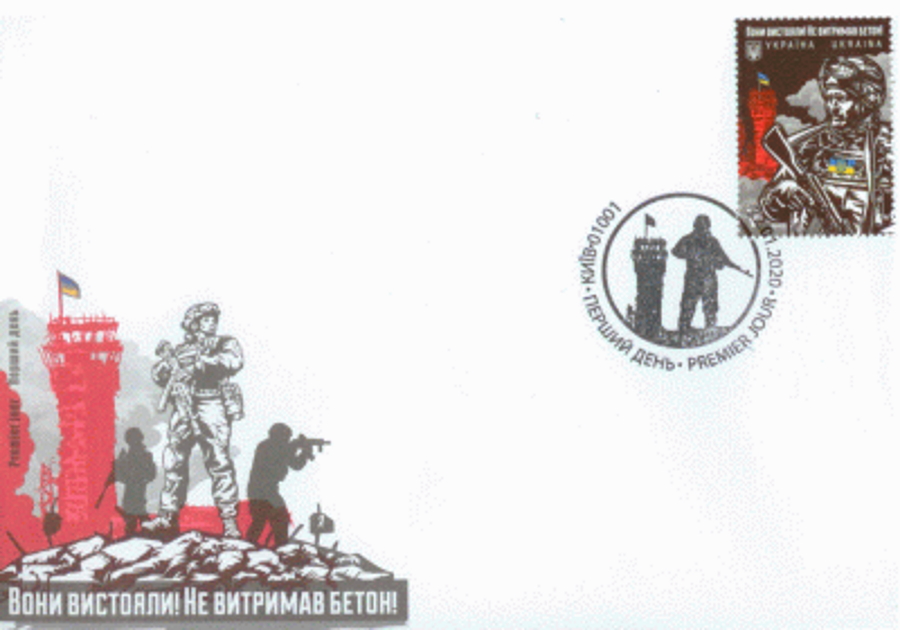