Please note: due to the conditions of Level 4 in the COVID-19 alert system, products will not be shipped until early May.

World War Two spanned nearly six years, and during that time New Zealanders lived through immense hardship, suffering and change. Through these challenging years they connected, worked together, rallied as citizens and solved problems both abroad on the battlefields and on home soil. During the war advancements in medicine, trade and manufacturing occurred worldwide – changes that we still benefit from today.

A cataclysmic event, the Second World War was fought out in territories, seas, and skies across the face of the earth and touched most of humanity. Notably, it would prove to be the most lethal conflict ever waged, killing some 60 million.

In 1945, the war ended with a total Allied victory over Germany and Japan marked, respectively, by VE Day and VJ Day. In the decades separating 1945 and 2020, New Zealand has experienced revolutions in politics, customs, and fashions. Consequently, the New Zealand that fought in World War Two can be difficult for modern eyes to recognise. However, towards the 75th anniversary of VJ Day, the war’s legacies remain relevant to understanding New Zealand today.

$1.30 Mobilising the nation
A soldier is met by a group of children in Wellington after his return from the Middle East on a hospital ship.

$1.30 HMS Achilles
In Auckland, crowds turned out to welcome HMS Achilles, returning to New Zealand after the Battle of the River Plate.

$1.30 Fighter pilots
New Zealand fighter pilots beside a Supermarine Spitfire in England, 15 July 1942. A single-seat fighter, the Spitfire established a formidable record during the Battle of Britain. It remains an iconic aircraft.

$1.30 Retreat from Crete
An injured soldier assisted off a ship in Alexandria, Egypt, after the evacuation from Crete.

$1.30 Women’s War Service Auxillary
Women from the Auxiliary Army Corp worked on a wide range of war-critical jobs as part of the defence effort at home.

$1.30 At rest in the Pacific
Members of the 3rd Division at ease at Vella Lavella, located in the Solomon Islands, c. 1944.

$1.30 Bomber Command
Members of 75 (NZ) Squadron at RAF Feltwell, England. They are passing a Wellington (Mk I), a four-crew, medium bomber that served as one of Bomber Command’s principal bombers in the early years of the war.

$1.30 Home Guard
Members of the Home Guard training in Waikato. Lacking uniforms, they have been issued with identifying armbands.

$1.30 Monte Cassino
Gordon Reid of the 4th Armoured Brigade in the ruins of Cassino, 18 May 1944. He is operating communication equipment and sits beside a Sherman tank.

$1.30 Peace Celebration in Wellington
A Wellington crowd on VJ Day, 15 August 1945, celebrating the end of the war. 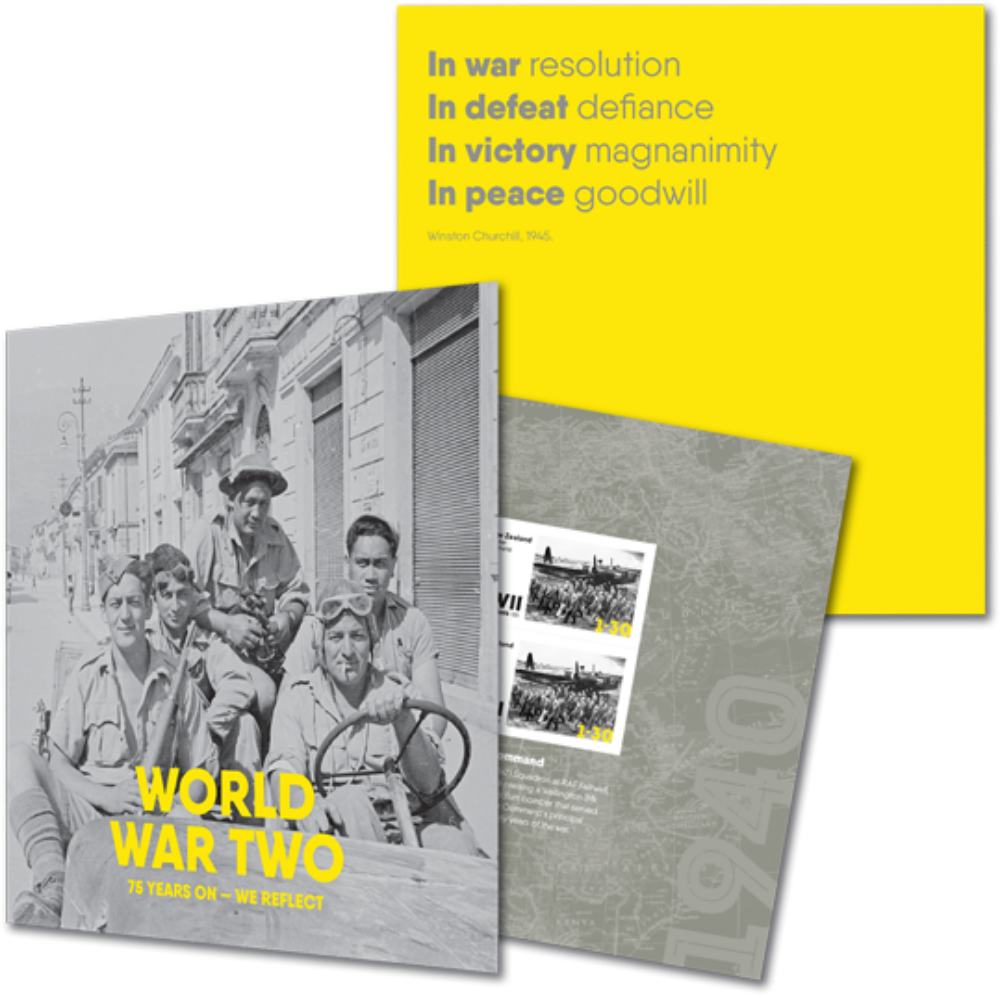 Miniature Sheet Booklet
Aided by historical photographs, this stamp issue reflects on the war years through 15 key themes and events. With this informative miniature sheet booklet, historian Steven Loveridge explores the ways in which the war affected New Zealanders, both overseas and at home. The booklet contains fifteen unique miniature sheets, each featuring two stamps. 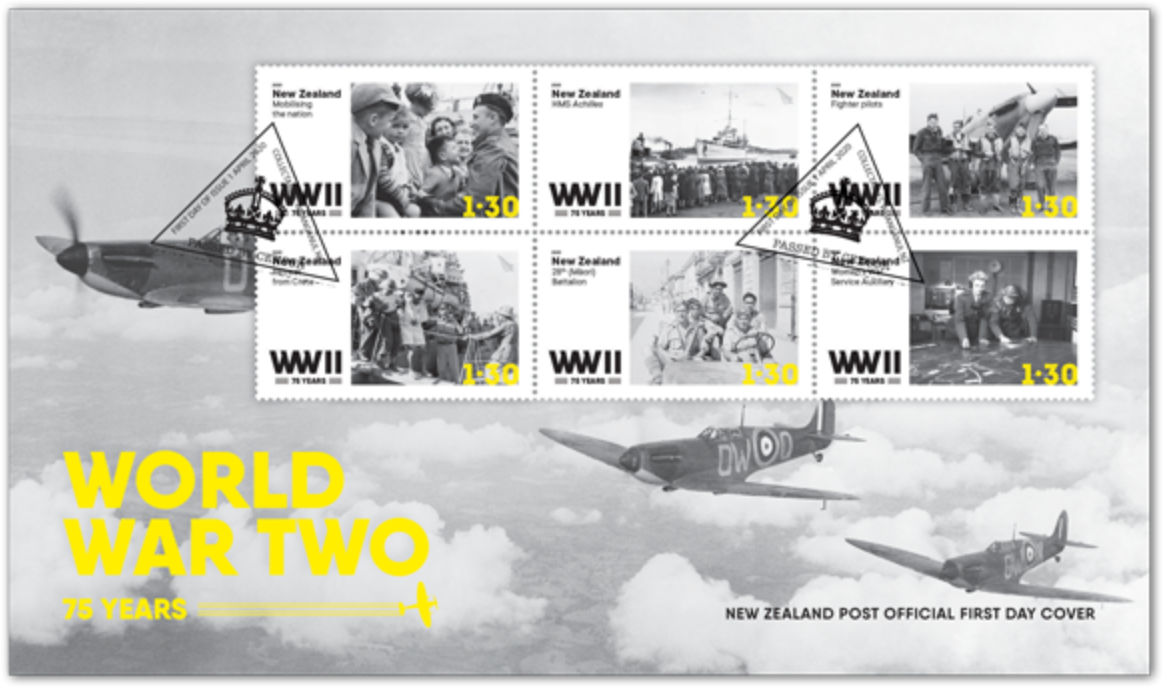 Spitfires: Spitfire 1As of 610 Squadron based at Biggin Hill, July 1940. Bernard Brown from New Zealand flew with the 610 but there were others who transitioned in and out during the Battle of Britain. 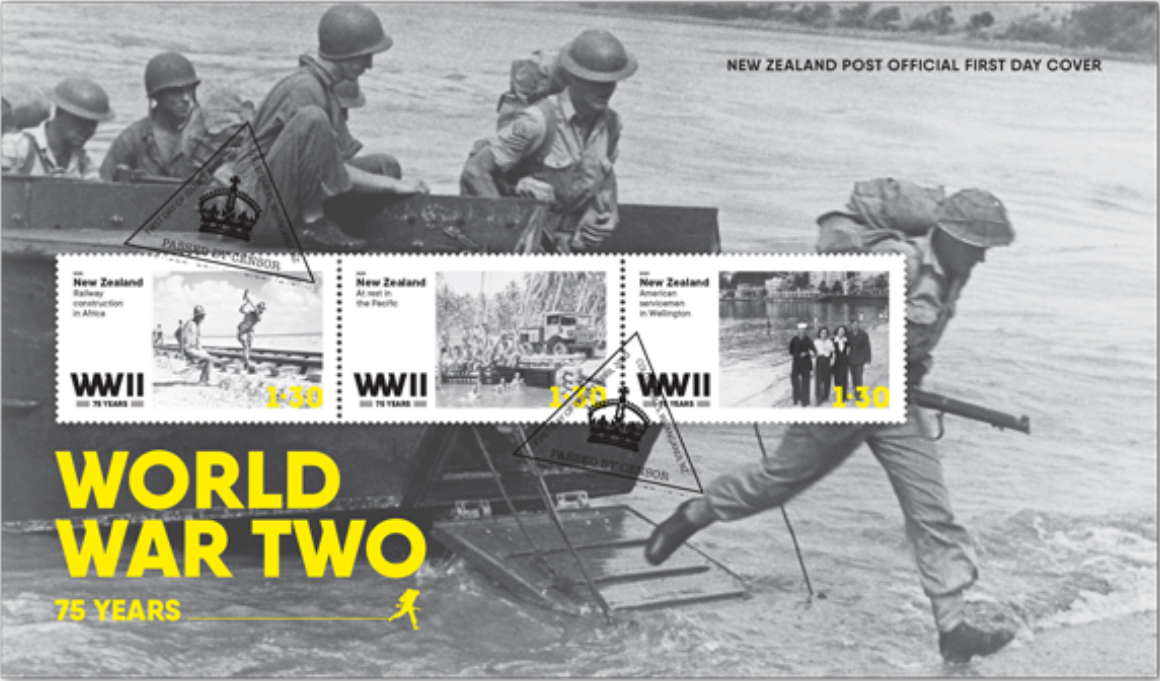 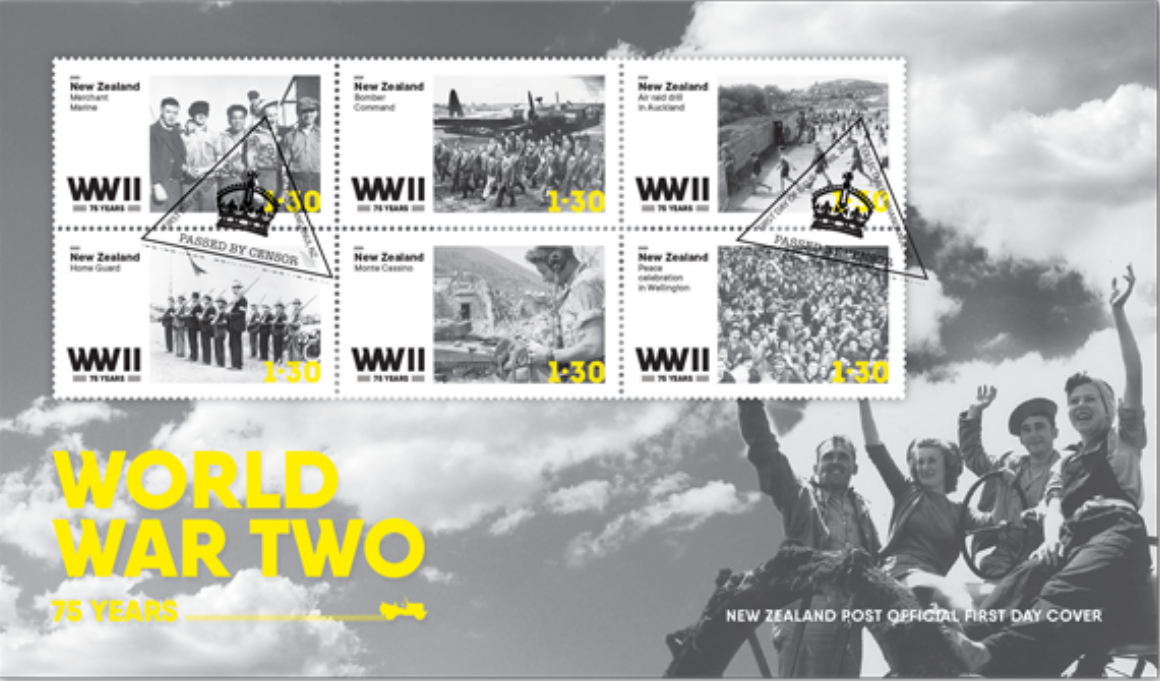 2020 WWII 75 Years Remembrance 2oz Silver Proof Coin
The Remembrance coin is a reminder of the impacts of WWII – the war took the life of one in every 150 New Zealanders. It changed the landscape of New Zealand society, and those impacts are still apparent today. This coin commemorates this anniversary with a wreath of native New Zealand flora. 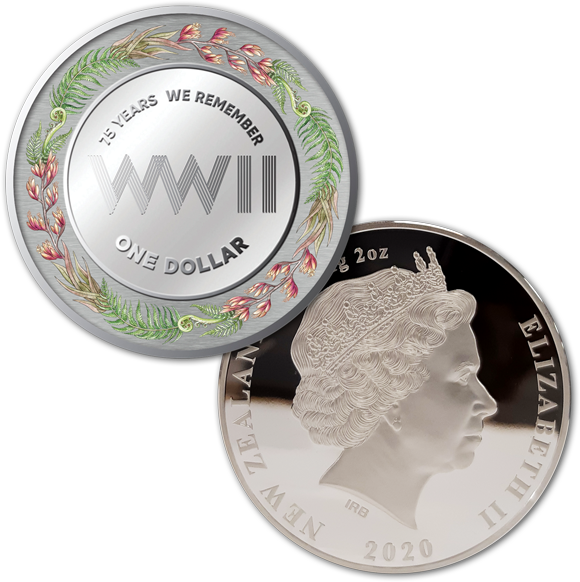 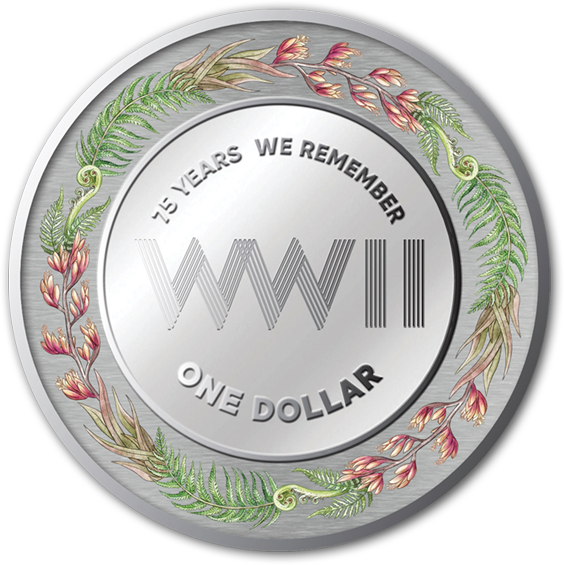 This coin features a remembrance wreath comprised of New Zealand native plants harakeke (flax) flowers and ponga (fern) koru and fronds. Among its many uses, harakeke is prized as a durable weaving material, and here symbolises the strength and unity of New Zealand communities as they endured six years of disruption, rationing and anxiety. Koru, the coiled, unfurled fronds of New Zealand ferns, the represent hope and new beginnings brought by the end of this terrible war. 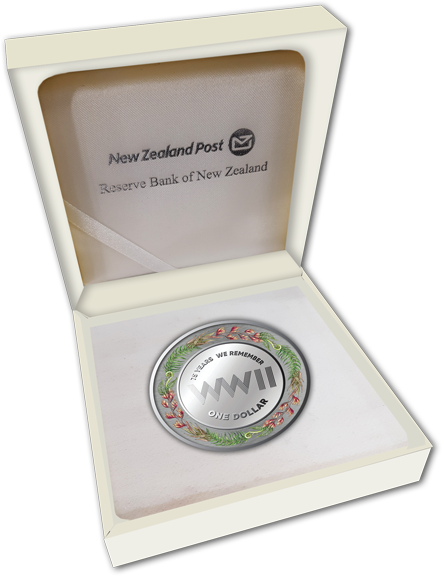