In te reo Māori, the indigenous language of Aotearoa New Zealand, kākāriki is the term used to describe the small parakeets found on the mainland and surrounding islands. All species and subspecies of New Zealand parakeet share the characteristic of green plumage, and kākāriki also serves as the word for this colour.

Kākāriki are small moss green-coloured parrots with a few blue flight feathers and long tails. Each species is diagnostically different, often with bright red or yellow feathering on the forehead and crown, near the eye and on the side of the rump. Like many of New Zealand’s native birds, they are threatened by introduced mammalian predators. 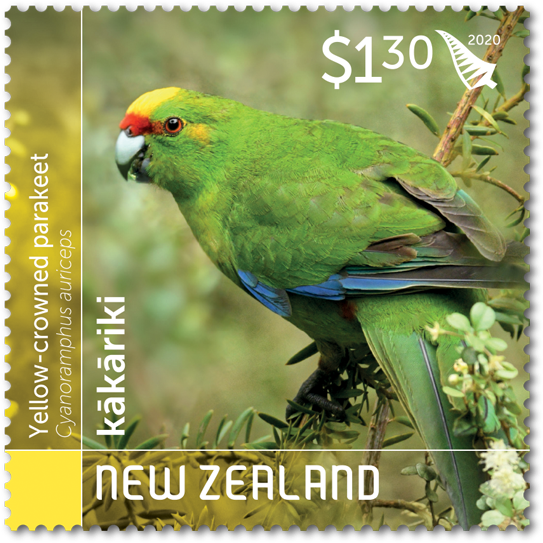 $1.30 Yellow-crowned parakeet
By feeding mainly on invertebrates, flowers and seeds in the canopy of beech and podocarp forests, and by nesting high up in trees, Cyanoramphus auriceps have been more resistant to the threat of mammalian predators than other species. 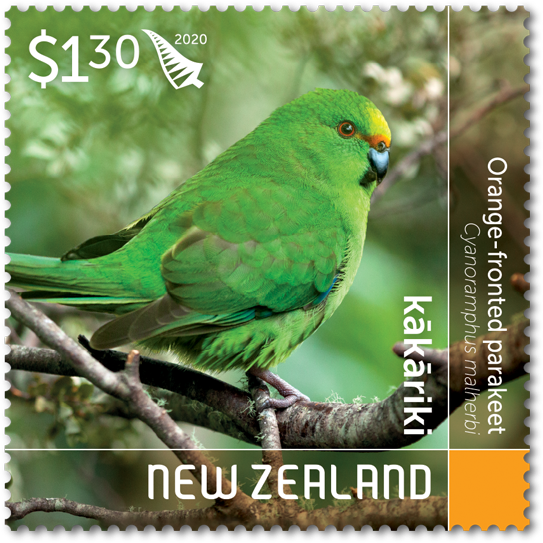 $1.30 Orange-fronted parakeet
Because they feed on invertebrates, flowers and seeds in the lower levels of the forest, Cyanoramphus malherbi are very vulnerable to predators, and so remain one of New Zealand’s most threatened birds. 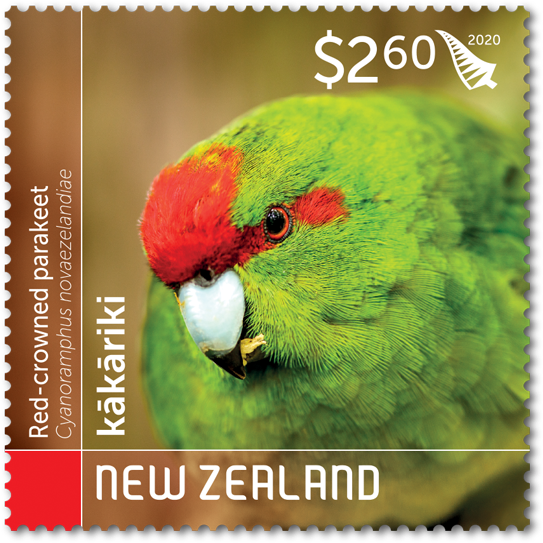 $2.60 Red-crowned parakeet
Cyanoramphus novaezelandiae have largely disappeared from the New Zealand mainland, but flourish on many islands from the subtropical Kermadec Islands to the subantarctic Auckland Islands, and many offshore islands of Aotearoa. 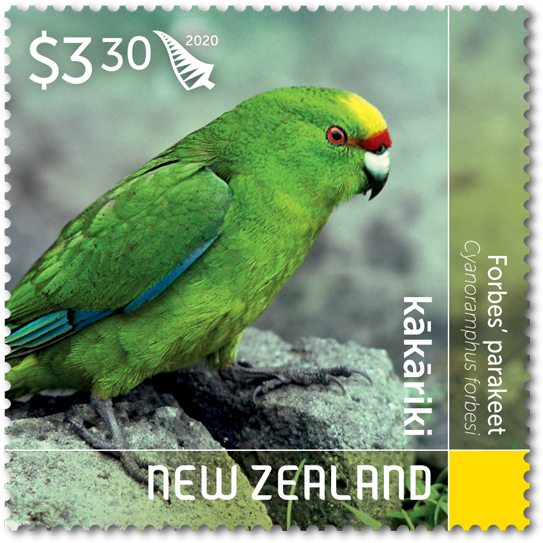 $3.30 Forbes’ parakeet
In the distant past, the ancestors of yellow-crowned parakeets reached the Chatham Islands, and slowly changed sufficiently to be recognised as a distinct species, Cyanoramphus forbesi. 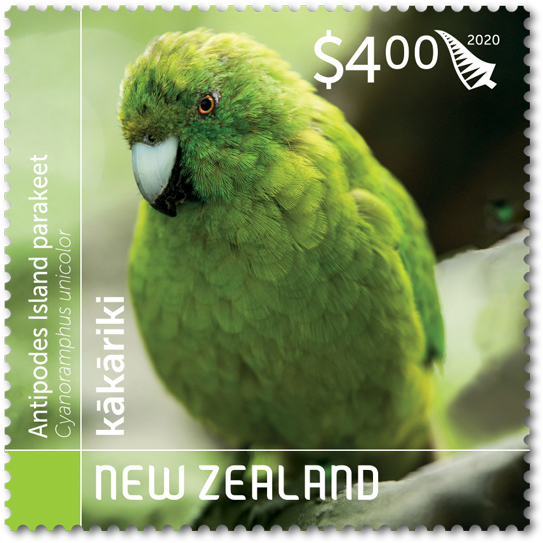 $4.00 Antipodes Islands parakeet
Although they can fly, Cyanoramphus unicolor prefer to walk and climb through vegetation. Unusually, they feed on fat from seabird carcasses, on broken eggs, and can occasionally kill small seabirds. 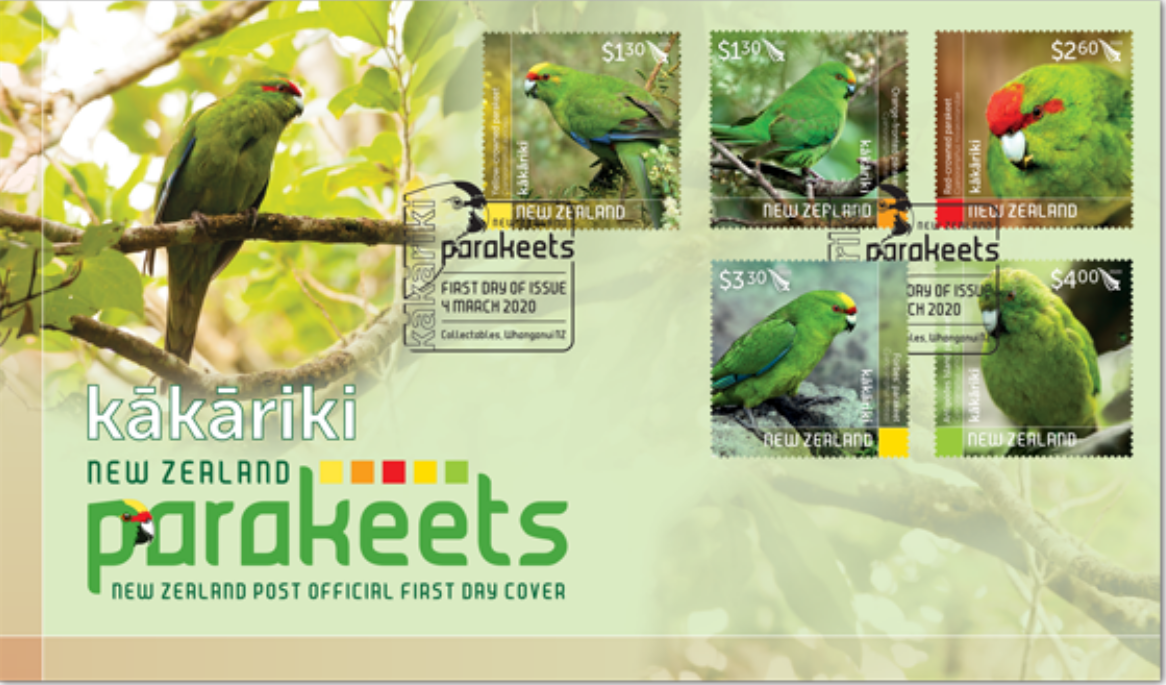 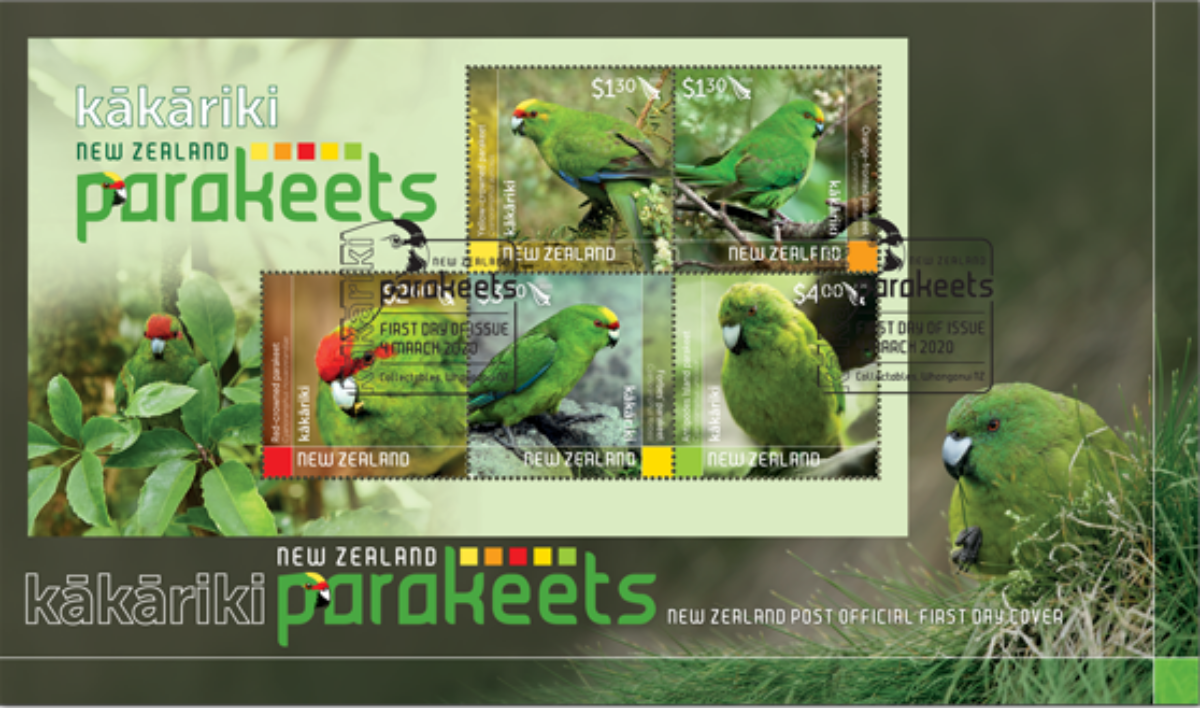 Miniature Sheet and First Day Covers
The miniature sheet and first day cover for this issue both showcase the striking red-crowned parakeet, while the first day cover captures the Antipodes Island parakeet nibbling on a spear of grass, just one item in its varied diet. 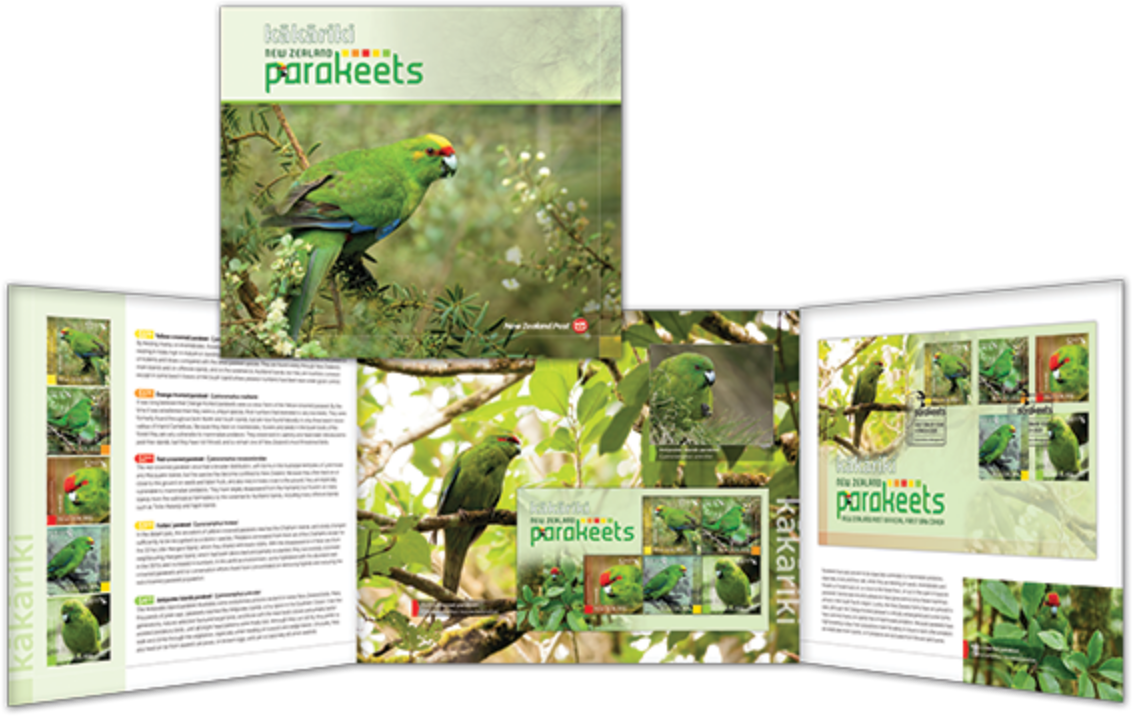 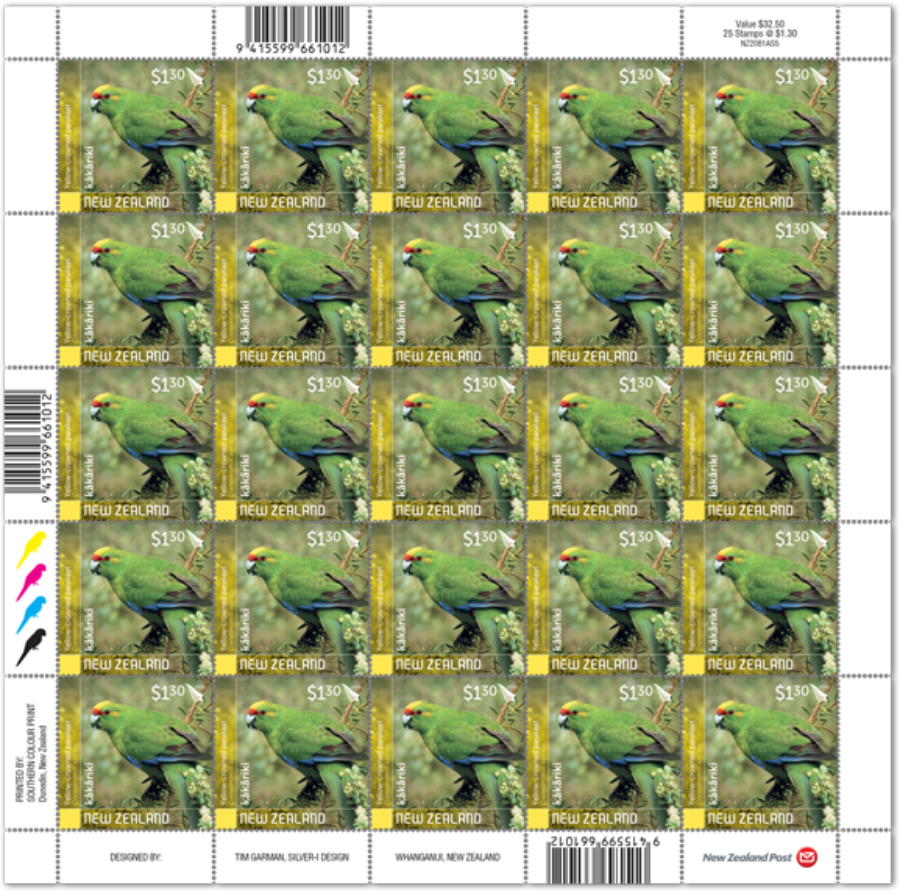 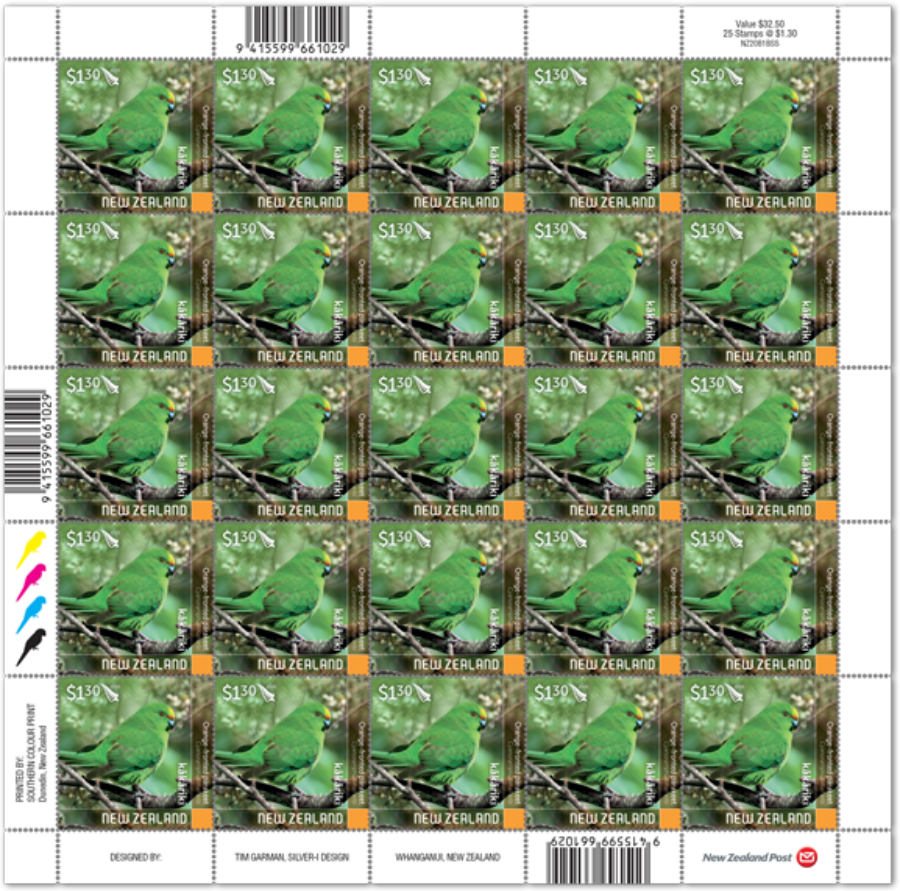 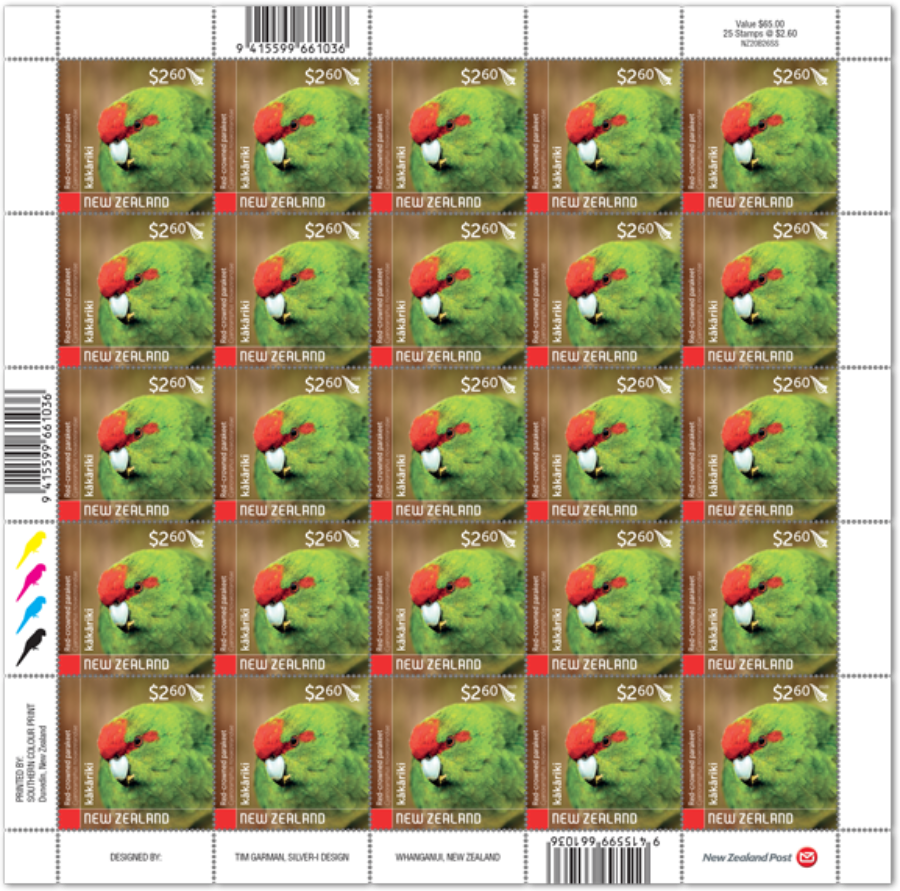 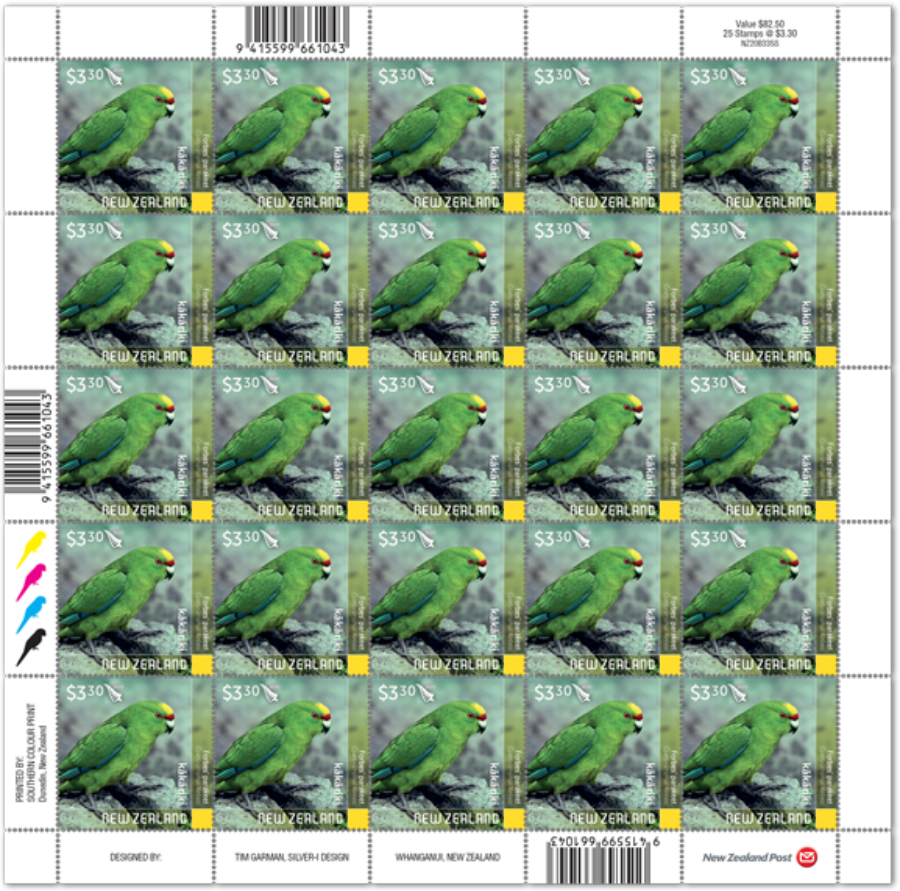 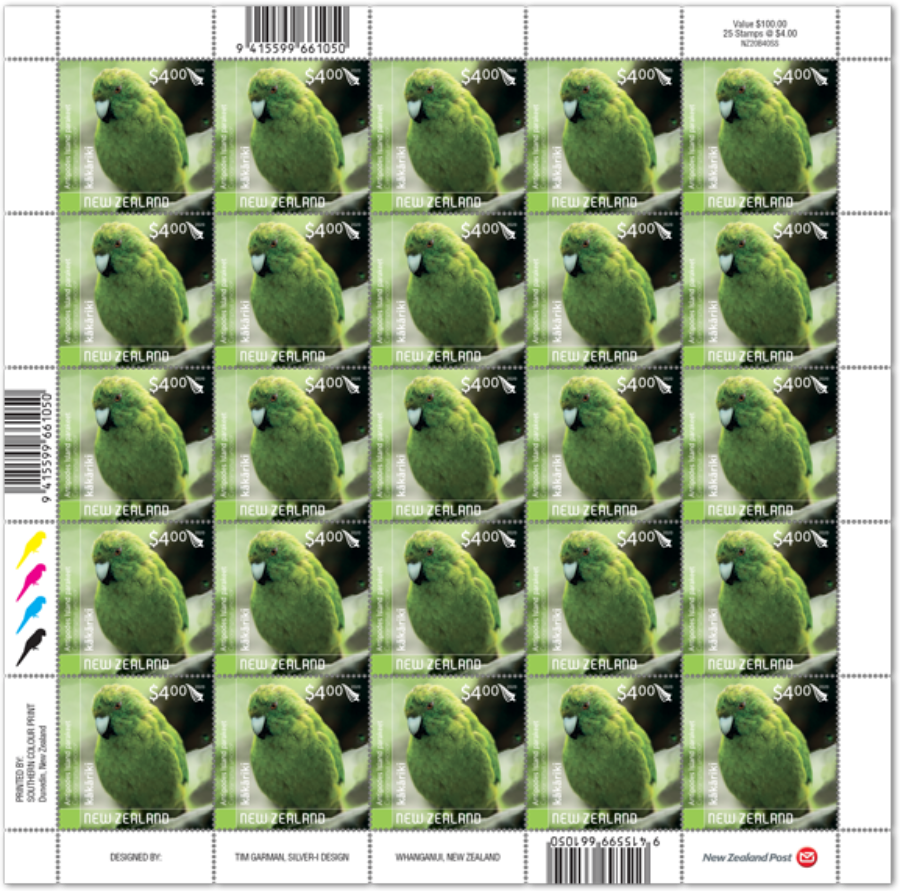