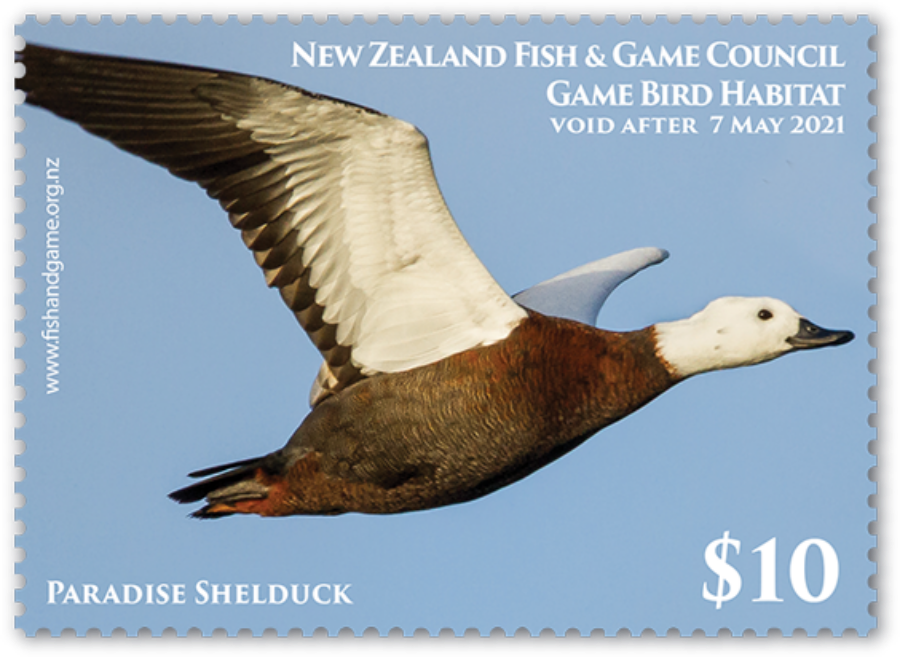 According to Virtual New Zealand Stamps,

“The New Zealand Game Bird Habitat Trust, established under the 1953 Wildlife Act, exists primarily to improve New Zealand game bird habitat, and secondarily to improve the habitat for other wildlife. The key purpose of the Game Bird Habitat Trust Board is to distribute funding for the development and enhancement of wetland habitat for the benefit of game birds and other wetland inhabitants.

The New Zealand Fish and Game Council commenced issuing $10 license stamps in 1994. The stamp is affixed to the game bird hunter’s license thus validating the license for the current year. $2 of the license fee goes towards establishment and protection of Game Bird Habitats. The stamps and related products such as miniature sheets and First Day Covers are also marketed by NZ Post with funding received going back to the Habitat Trust.“

World Wetlands Day, held every year on 2 February, marks the date of the adoption of the intergovernmental treaty the Convention on Wetlands. The New Zealand Game Bird Habitat Collection is issued every year on this date; the 2020 issue is the 27th in the series and features the paradise shelduck (Tadorna variegata). 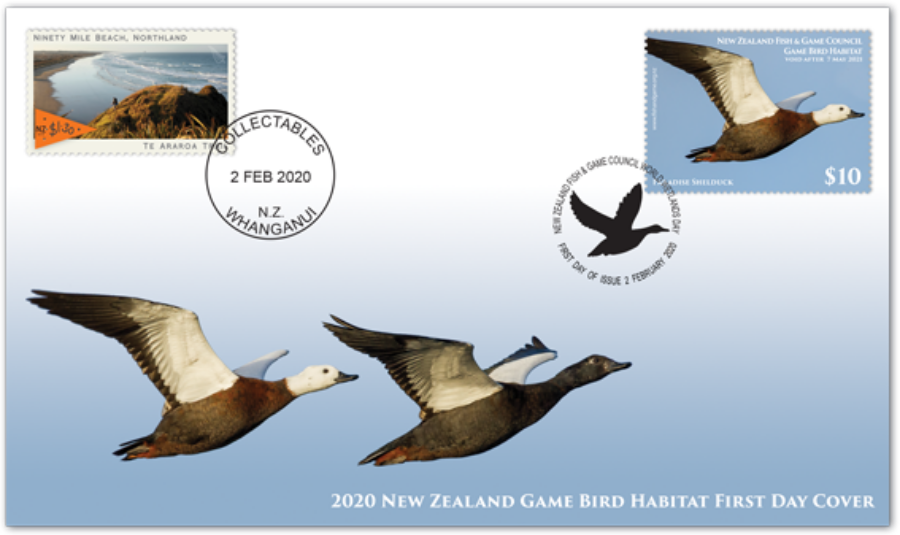 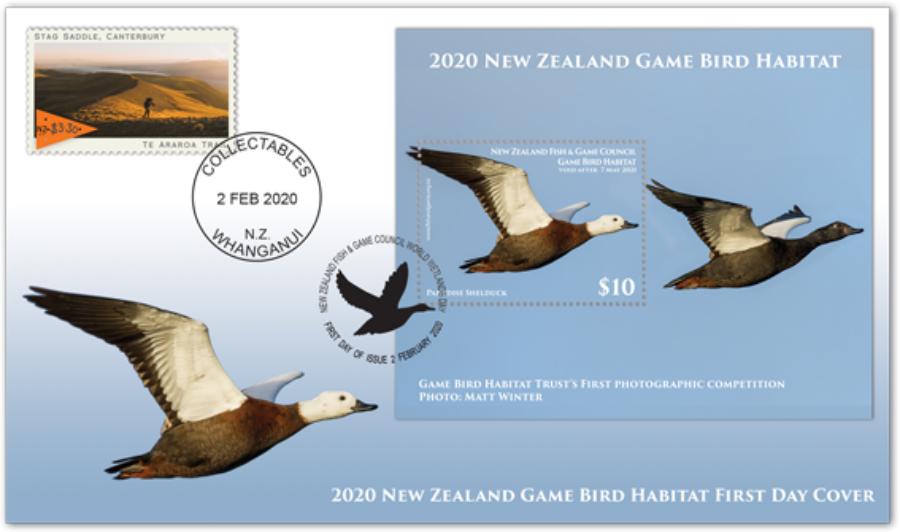 This image was captured by Matt Winter, the winner of Game Bird Habitat Trust’s inaugural photo competition for the annual stamp. Winter’s perfectly timed image capturing the hen and drake together was the standout of 72 entries.

Despite being hunted as a gamebird, the paradise shelduck population has dramatically increased in recent decades. It is currently New Zealand’s most widely distributed waterfowl, and the second most common after the mallard. They have be come so populous that farmers occasionally conduct legal culls. Larger than the average duck, this species could be mistaken for a small goose. The female of the species is the more striking bird, with chestnut colouring and a white head and neck, while her mate’s head is black and his body dark with tawny tints.

The paradise shelduck has benefited from the human modification of natural landscapes, another characteristic that makes this bird stand out from other native duck species. They are herbiverous, with a preference for pasture grasses and clover, but are known to eat a broad range of leaves and seeds, insects, and some aquatic plants and invertebrates. These birds usually mate for life, and pairs create a two-tone cry with their alternating calls. Pūtangitangi, their Māori name, refers to this call; a tangi is a lamentation for the dead. 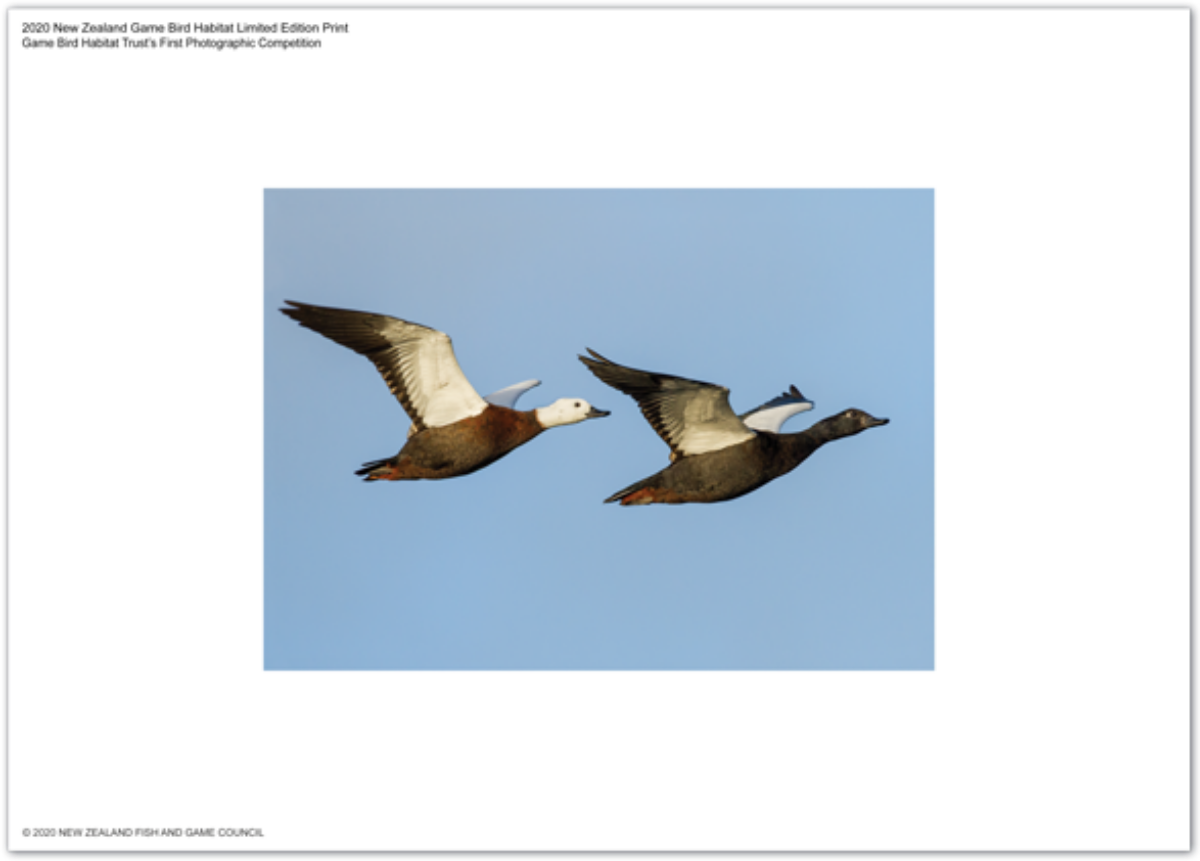 Limited edition hand-numbered and signed artist print. Each print includes two stamps, of which one is signed by the photographer, Matt Winter.