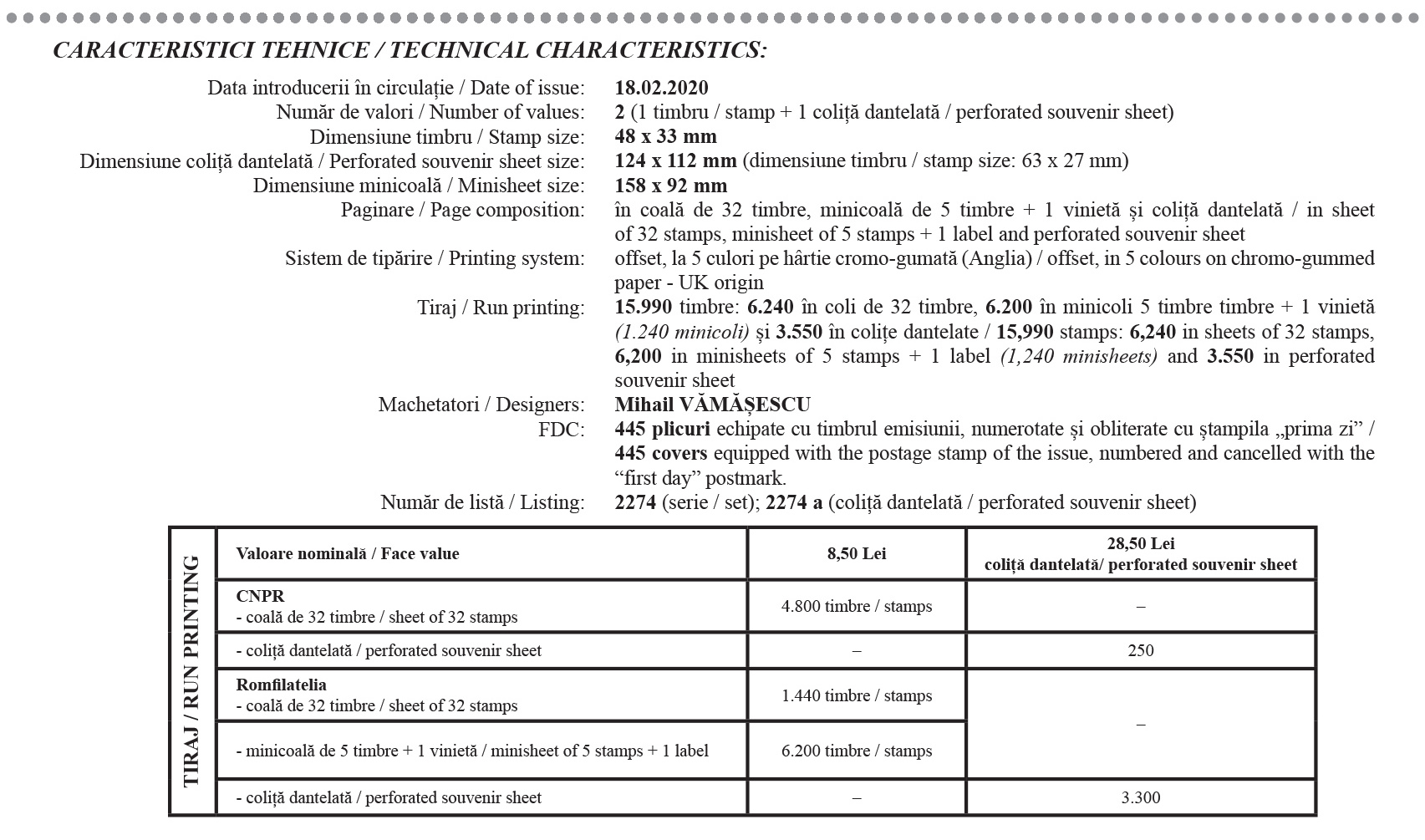 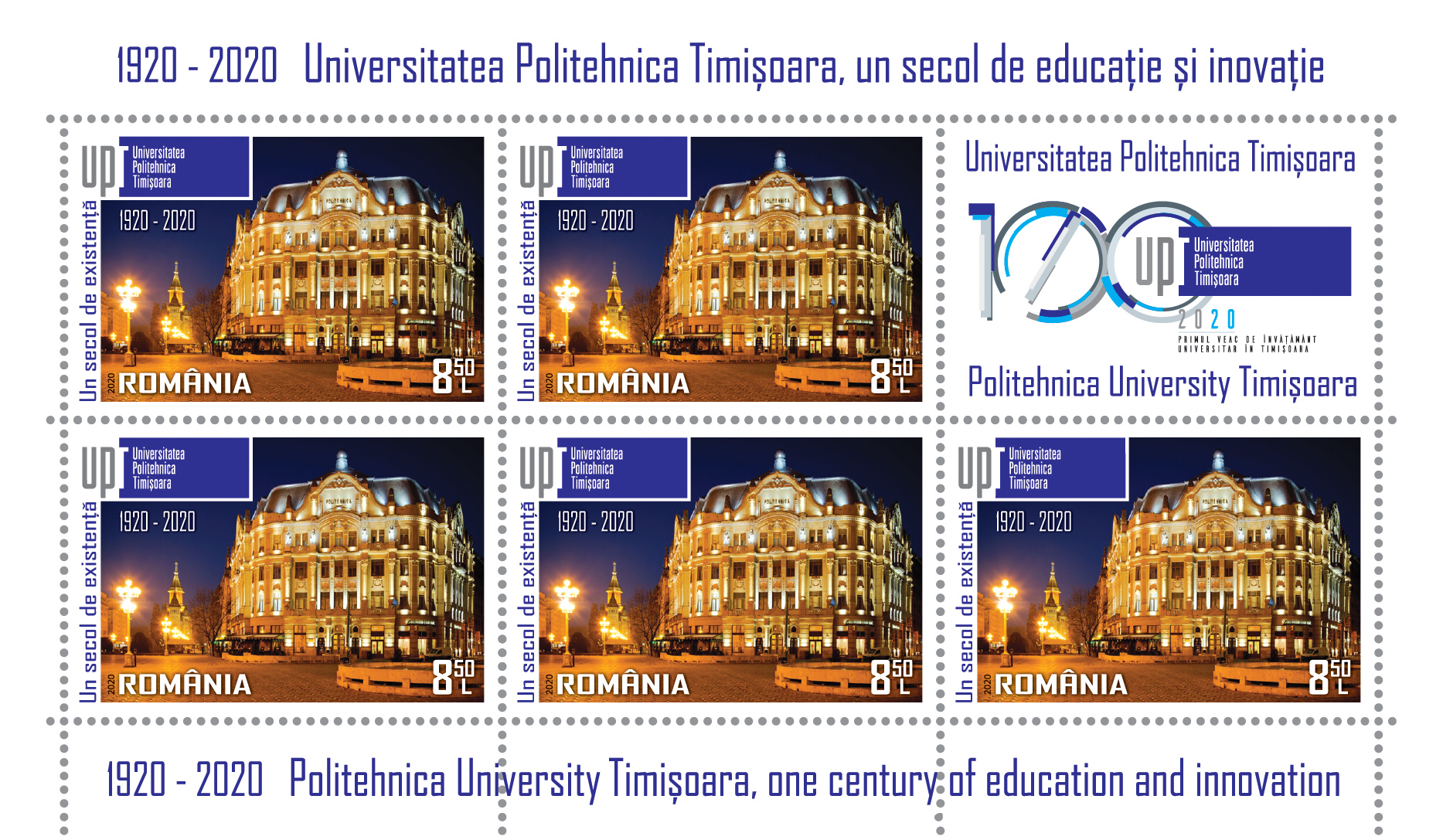 POLITEHNICA UNIVERSITY TIMIȘOARA, ONE CENTURY OF EDUCATION AND INNOVATION

The postage stamps issue, that contains a stamp and a perforated souvenir sheet, is dedicated to the anniversary of the Politehnica University Timișoara, which celebrates, this year, a century since its establishment and marks the Centenary of the first higher education institution in the west of the country.

On the postage stamp of the issue, with the face value of Lei 8.50, the current building of the Rectorate of the Polytechnic University of Timișoara is illustrated, next to the logo of the institution.

The perforated souvenir sheet of the issue, with the face value of Lei 28.50, presents a graphic composition that illustrates the historical course of the institution, as follows: the image of King Ferdinand along with the anniversary logo of the Politehnica University Timișoara associated with the image of the Lloyd Palace (in 1920), the current headquarters of the University Rectorate and the facsimile of the founding decree are illustrated on the stamp.

Lloyd Palace was the place where, 100 years ago, on May 23rd – 24th, 1920, the first philatelic exhibition in Greater Romania was organized. 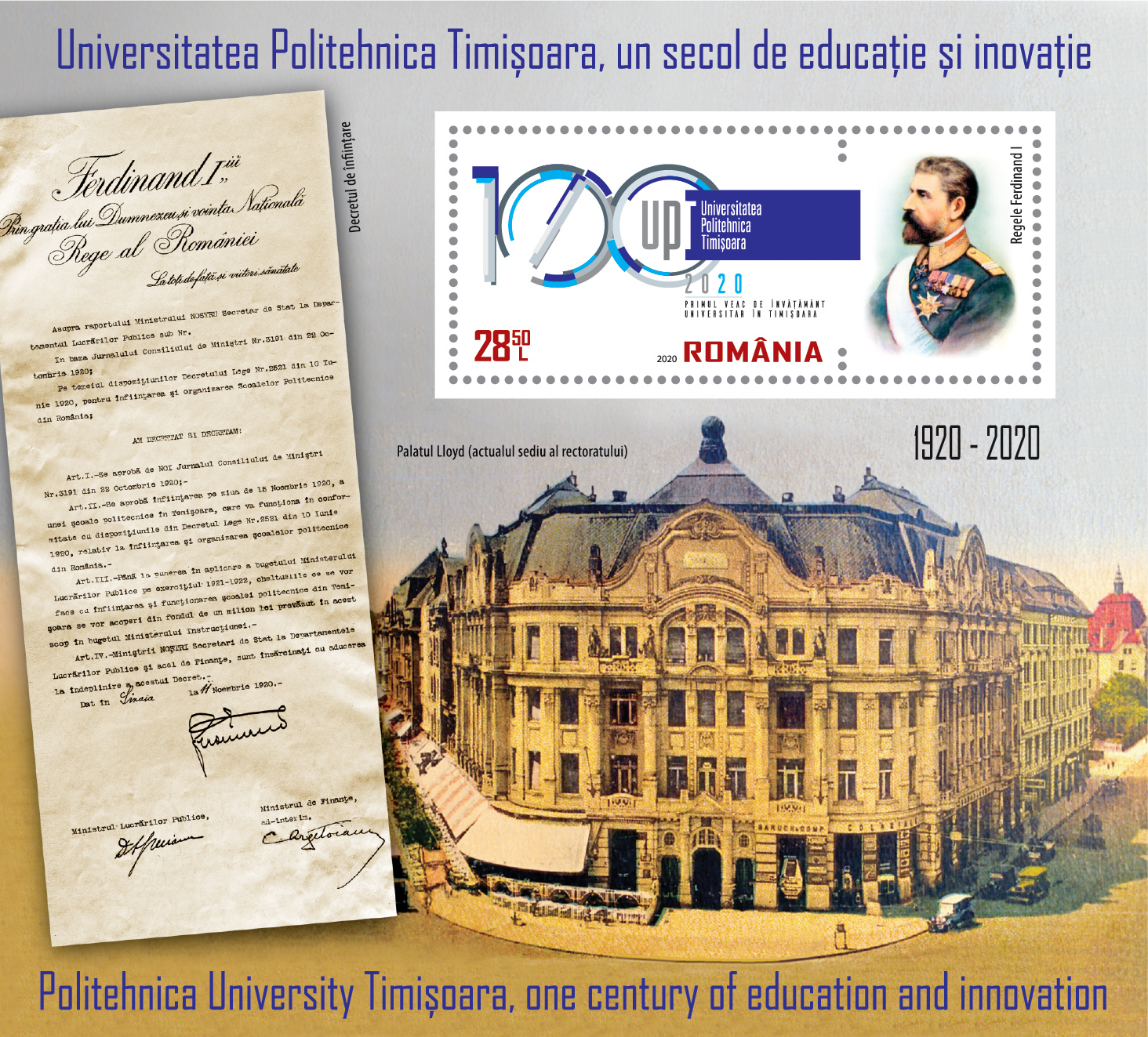 The Great Union of 1918 resurrects the hopes of Banat Romanians towards fulfilling a scientific and economic purpose, to truly identify the interest and requirements of most of the inhabitants of Banat, to establish a higher polytechnic school.

King Ferdinand I signed, on November 11th, 1920, the Decree Law on the establishment of the „Polytechnic School” in Timișoara, thus responding to the wishes of Romanians from Banat. We owe to this monarch, moreover, the memorable phrase spoken a few years later and which, in the meantime, became the motto of the university: “It is not the walls that make a school, but the spirit that reigns in it.”

Since its establishment, the Polytechnic University of Timișoara has kept the quality record of the educational act which, doubled by a scientific research activity at the highest level, has resulted in generations of well-trained engineers, specialists in their field, who have established in the country and abroad the prestige of the Polytechnic School.

The latest Times Higher Education ranking for the field of Engineering and Technology, the Polytechnic University of Timișoara is in the second place in the top of the Romanian universities and in the first place in the one of the technical universities. Also, in the US News ranking, the Polytechnic University of Timișoara ranks 573rd in the world ranking, out of the approximately 9000 universities that have in the portfolio of study and research programs in the field of engineering, an important contribution to this position having a reputation at a regional level (Europe, 33rd place).

On November 11th, 2019, when the Politehnica Timișoara entered its 100th year of its existence, performance was celebrated, one of the values that have always been the basis of its activity and which have led it to the prestige it enjoys today locally, nationally and internationally. 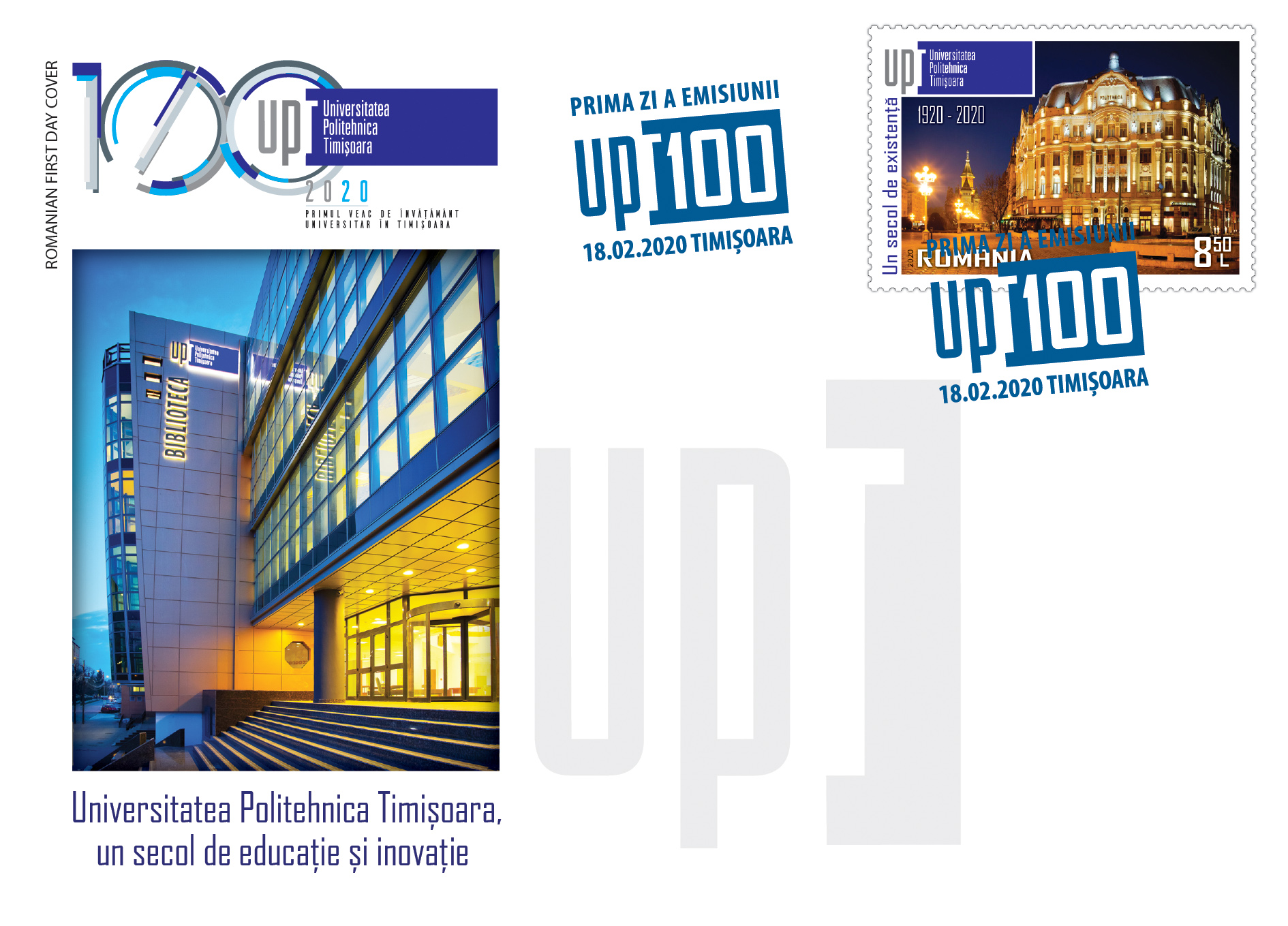 The First Day Cover of this postage stamps issue illustrates the image of the current Library of the Politehnica University Timișoara.

Romfilatelia thanks the representatives of the Politehnica University Timișoara for the documentary support given to the realization of this postage stamps issue.

The postage stamps issue “Politehnica University Timișoara, one century of education and innovation” will be available on Tuesday, February 18th 2020, in Romfilatelia’s shops network in Bucharest, Bacau, Brasov, Cluj-Napoca, Iasi and Timisoara and online on http://romfilatelia.ro/store/. The postage stamps issue is completed by “first day” cover, and as page composition in sheet of 32 stamps, minisheet of 5 stamps + 1 label and perforated souvenir sheet. 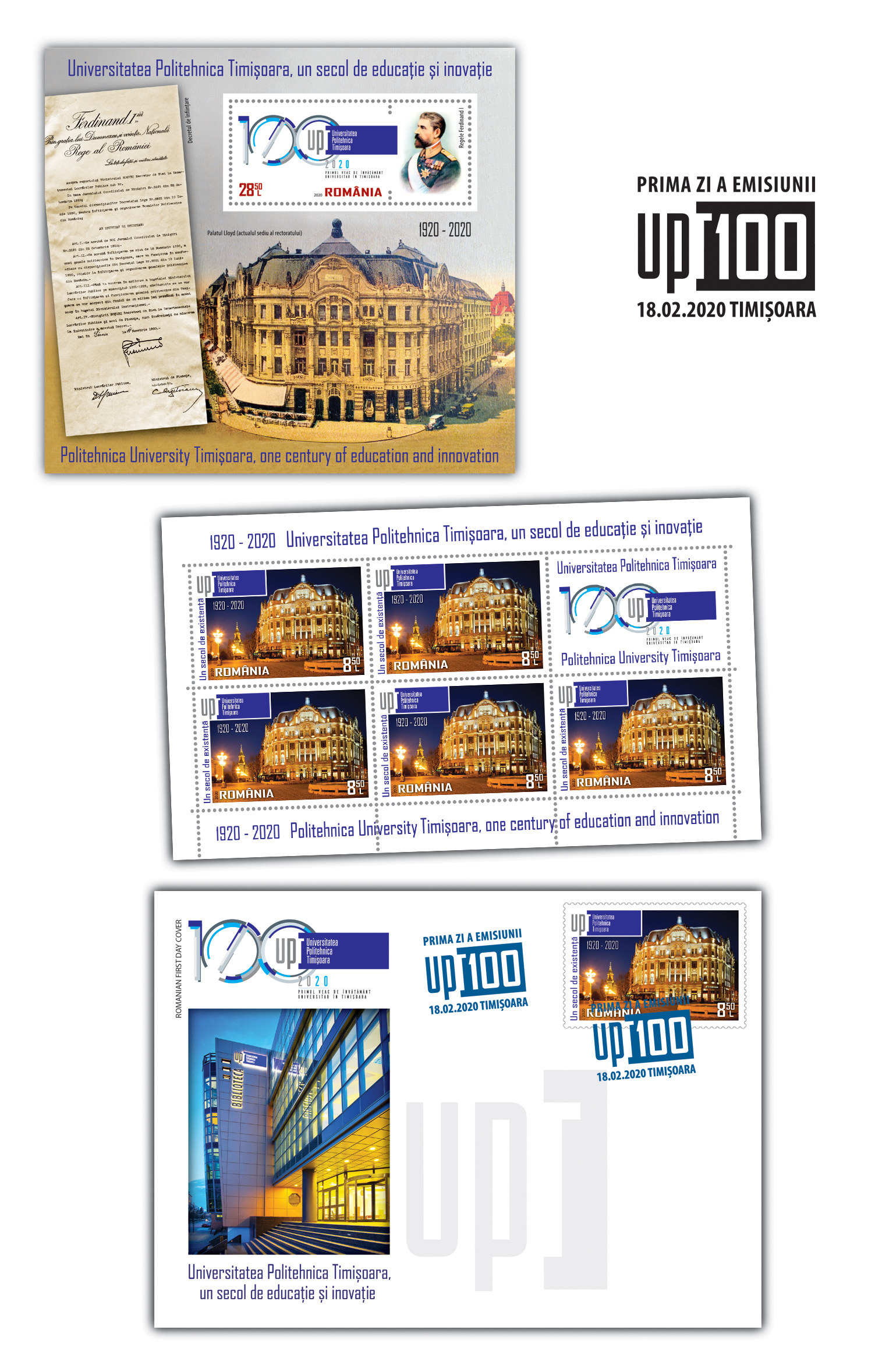