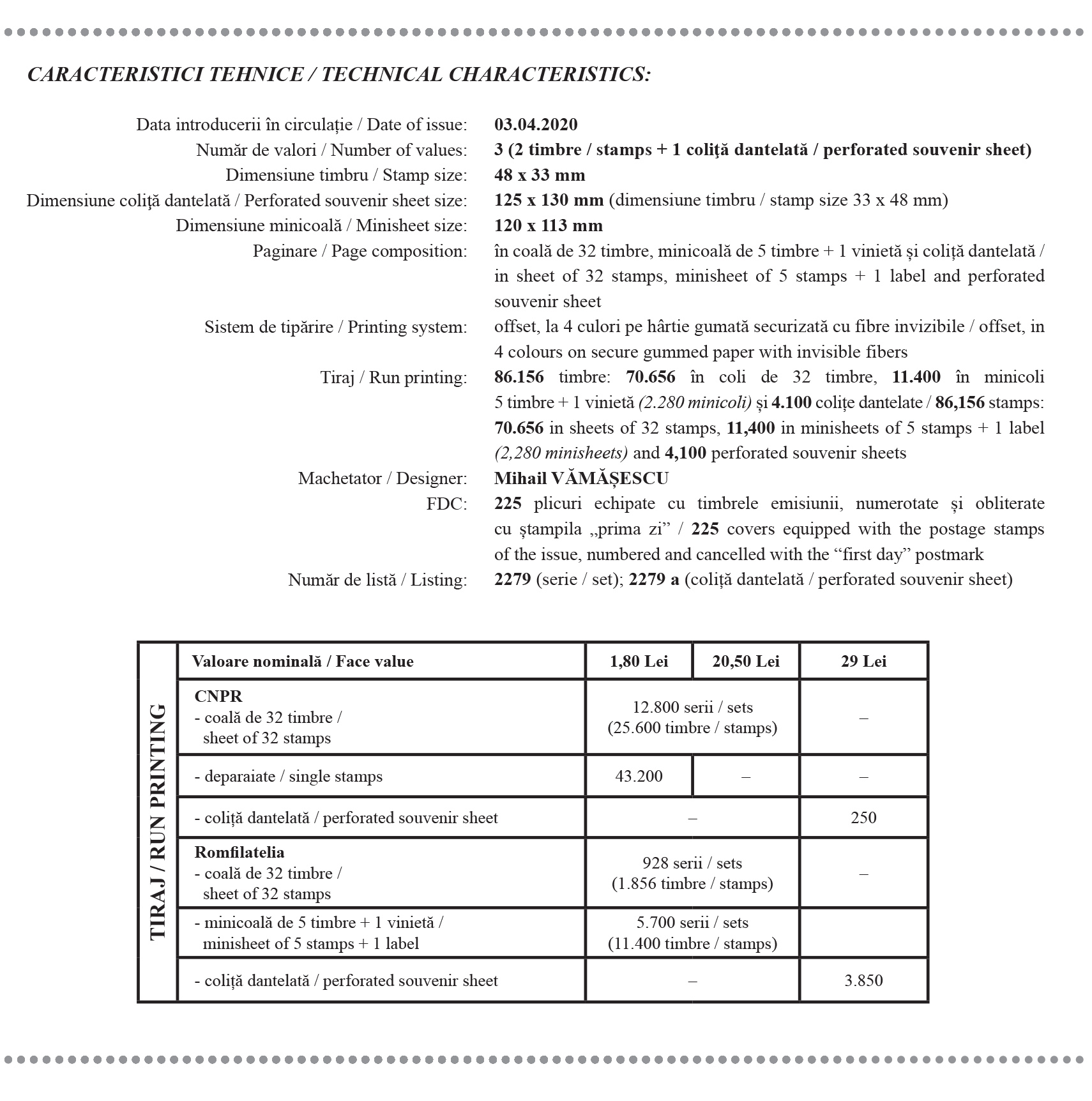 THE NATIONAL GRAND LODGE OF ROMANIA, 140 YEARS SINCE ITS ESTABLISHMENT

The issue, consisting of two postage stamps and a perforated souvenir sheet, brings to the attention of passionate stamp collectors’ novel aspects of the existence and activity of this fraternal society.

Freemasonry is a fraternal society the origins of which go back in time to the very cradle of humanity. Its efforts, directed toward perfecting the human being, are underpinned by the belief that love makes one a better, more enlightened, more just and more tolerant person, and a more useful member of society. 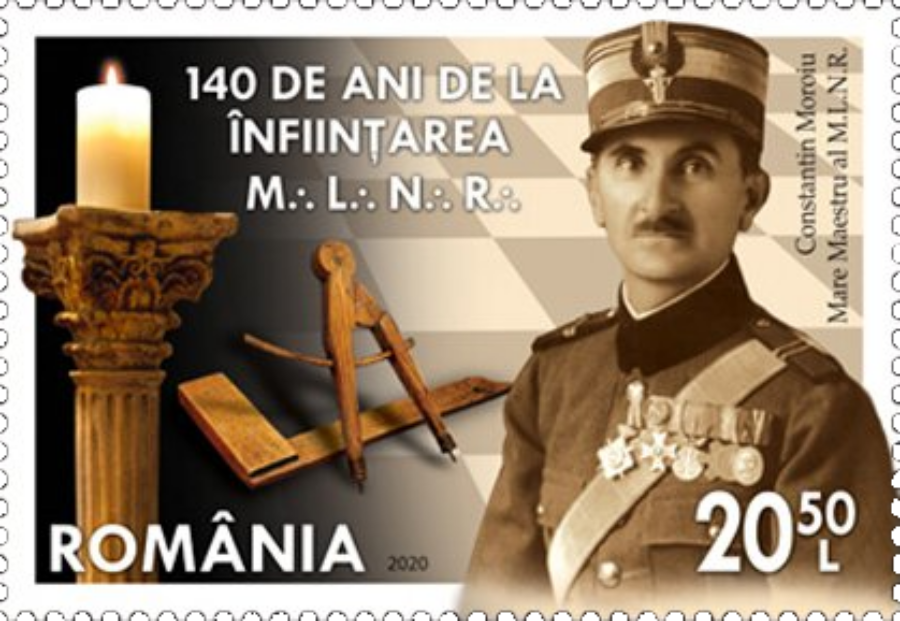 The Romanian Freemasonry has a long history, its beginnings being close to the establishment of the first Grand Lodge in London and Westminster (June 24th, 1717). In 1732, in Galati, the Loggia di Galazzi was founded, having as Venerable Master Prince Scarlat Ghica. In 1735 another Lodge was established in Iasi, the Venerable Master being Prince Constantin Mavrocordat. Masonic lodges were founded throughout the Romanian space, better known being the lodges St. Andreas zu den drei Seeblättern of Sibiu (1767) and Zu den drei Säulen of Brasov (1749). For a long time, great personalities of the Romanian history were initiated in masonry not only in the country but also in Obediences from abroad, among them counting I.C. Bratianu, C.A. Rosetti, Nicolae Balcescu, I.T. Ulic, Traian Mosoiu, Octavian Goga, Alexandru Vaida Voevod, Traian Vuia and many others.

he acquisition of the State independence of Romania in the war of 1877-1878 enhanced the actions in the masonic plan for the founding of a large Sovereign Obedience, since in the country a large number of lodges operated, under the Obediences of the Grand Orient of France, the Grand Orient of Lusitania or the Grand Orient of Italy. A first attempt was made on June 1st, 1859, I. C. Bratianu being considered Grand Master of the “Danube Star Grand Lodge”, and for 1861, with Ion Heliade Radulescu as Grand Master.

An important step was taken on May 7th, 1879, when Anton Costiescu (1840-1889), officer of the Romanian army, elite artilleryman and Venerable Master of the Sage of Heliopolis Lodge until June 1874. On May 1st, 1879, together with Basile-Constantin Livianu, he had promulgated the “Romanian Masonic Constitution”, in order to constitute the Grand Orient of Romania as “national and independent Sovereign Power”, with Th. Rosetti as Grand Master. The Grand Orient operated from May 7th, 1879 to December 15th, 1880. 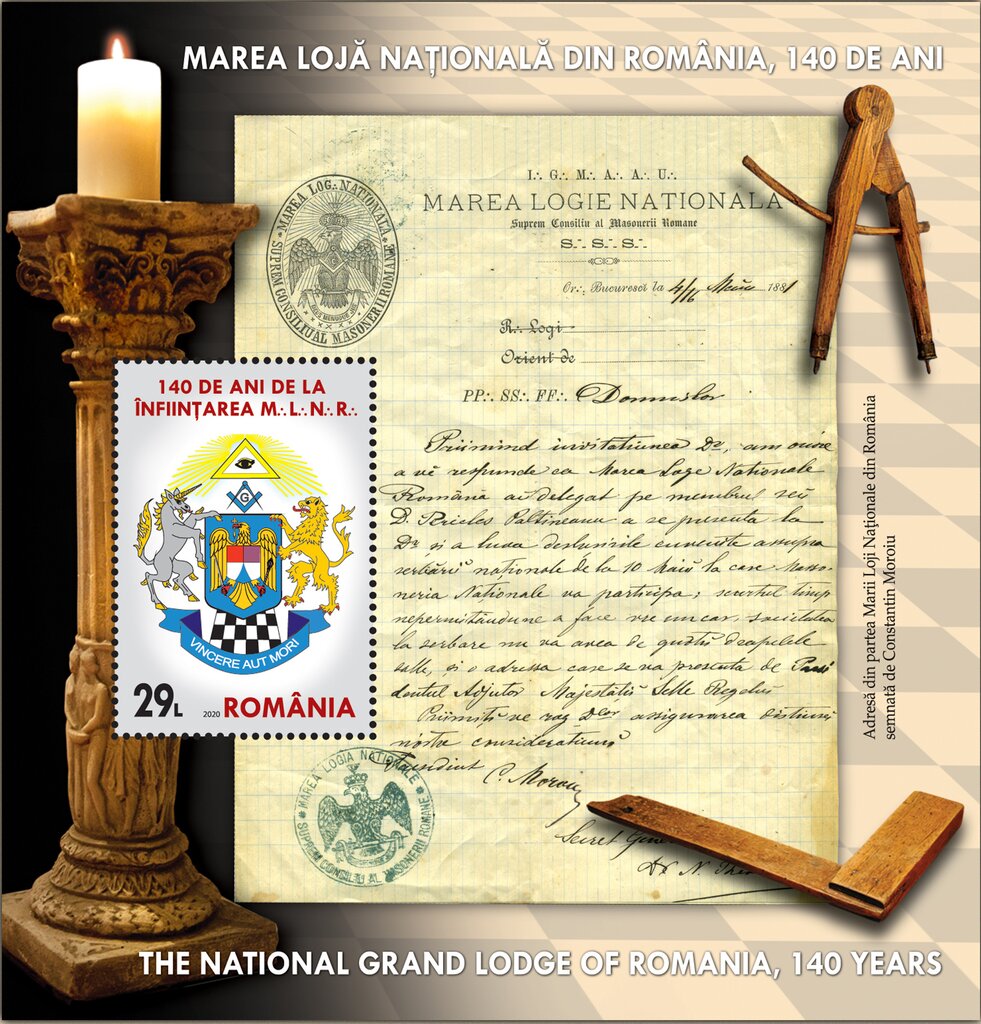 The official establishment of the National Grand Lodge of Romania took place on September 8th, 1880. Constantin Moroiu (1837-1918), an officer in the rank of captain, a participant in the War for the Independence of Romania and a very active philatelist, was elected Grand Master. Constantin Moroiu was initiated into the Sage of Heliopolis Lodge on June 9th/21st, 1874. On September 8th, 1880, he established the National Grand Lodge of Romania, with the contribution of the Brothers from the Danube Star, Ilfov Lodges and the Danube Star Capitulum. In 1881, he founded the Supreme Council of Primitive Ancient Rite of Memphis and the Supreme Council for Romania, and on November 22nd, 1882, the Grand Royal Arch Chapter. Between 1884 and 1886, Moroiu researched documents regarding the origin of Freemasonry in Romania, in the Italian archives in Florence, Naples and Venice. He established links with the Supreme Councils of Europe, was a Guarantor of friendship for many Grand Lodges and Supreme Councils, Grand Master of Honour of the Supreme Grand Council of several countries in Europe and America. In 1904, he participated in the Masonic Congress in Brussels. Until 1911, Constantin Moroiu has been the Grand Master and Sovereign Grand Commander, then dividing into two sections the Grand Lodge, remaining “Sovereign Pontiff”.

Constantin Moroiu pursued the preservation of the sovereignty and unity of the Romanian masonry, for which a single Constitution was adopted for the entire Masonic Order, which included the Grand Lodge and the rites with the specialised training workshops under their subordination. The drafting of the Constitution (320 articles) was completed on November 5th/17th, 1880, being published in Bucharest in 1881. From the very beginning at art. 1, the National Grand Lodge affirmed its deist and regular masonry status, proclaiming as the basic principle “the existence of the Divinity, the immortality of the soul and the solidarity of humanity”. Freedom of conscience was respected, as “a right of every human being; it excludes no one for its religious beliefs”, and the motto was that of regular universal Freemasonry: “Freedom, Equality, Fraternity”. 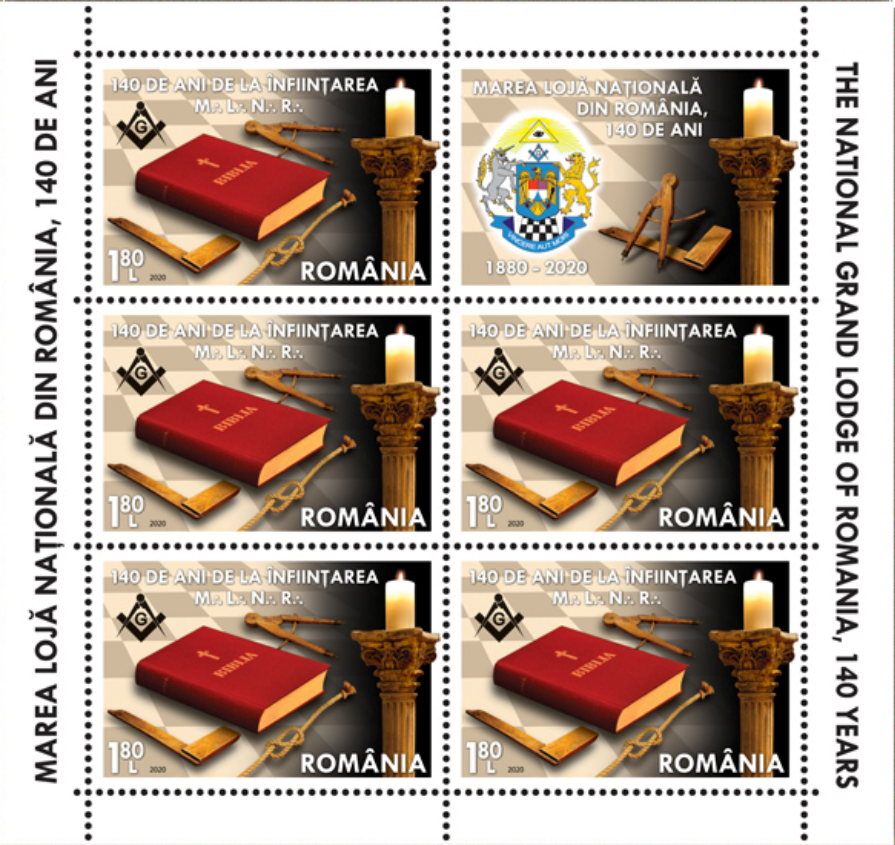 Forced to freeze operations in 1937, then in 1948, the National Grand Lodge of Romania resumed the Lights at the Convent on January 24th, 1993, held in the Hall of Mirrors, at the Vernescu House, having as Grand Master the Most Respectable Brother Nicu Filip, followed by the Most Respectable Brothers Adrian Dohotaru, Sever Frentiu, Vladimir Boanta, Gheorghe Comanescu, Ovidiu Chirovici, and since 2010, the Most Respectable Brother Radu N. Balănescu, recognized and respected in the world masonry, where he held the position of Chairman of the World Conference of Grand Regular Lodges, subsequently being awarded the title of its Honorary President Ad Vitam. 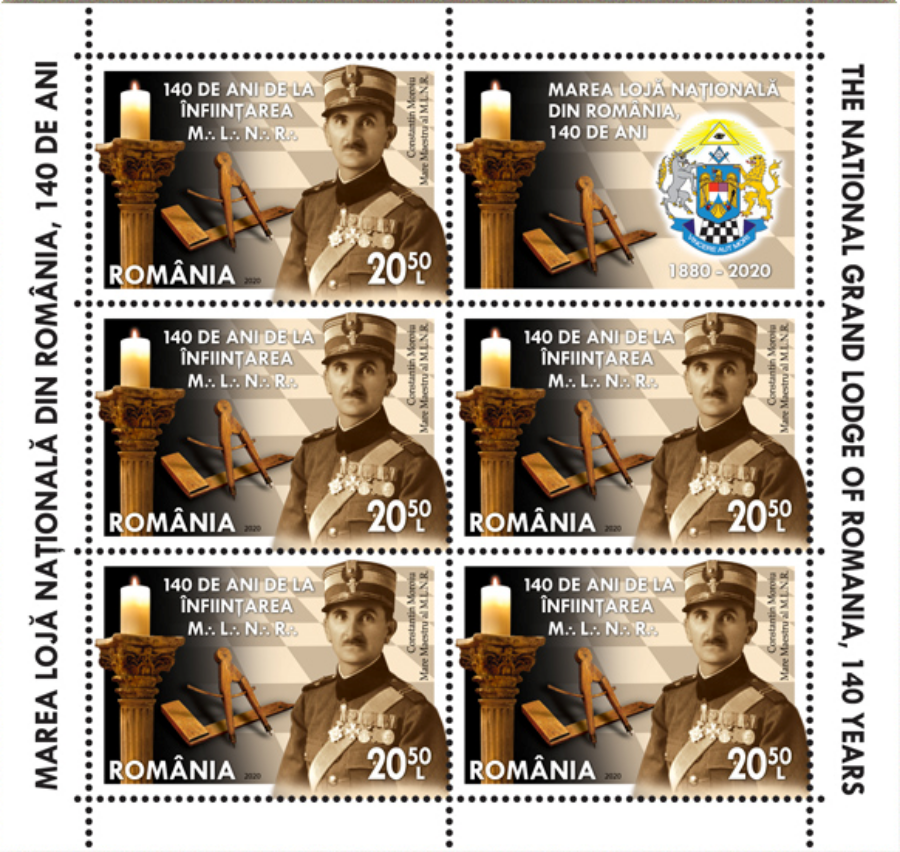 The postage stamp with the face value of Lei 1.80 presents as central element the Bible, around which Masonic symbols are represented.

On the postage stamp with the face value of Lei 20.50 lei illustrated the portrait of the First Grand Master, Constantin Moroiu, along with Masonic symbols.

On the perforated souvenir sheet of the issue with the face value of Lei 29, the following elements are graphically represented: the address signed by Constantin Moroiu from the National Grand Lodge of Romania regarding the delegation of Pericle Paltineanu to attend the Coronation Feast of May 10th, 1881, of King Carol I, the logo of the National Grand Lodge of Romania, alongside of Masonic symbols, the lit candle being also represented on the stamps, as unitary element.

The logo of the National Grand Lodge of Romania is represented on the First Day Cover.

Romfilatelia thanks to Mr. Radu Balanescu, Grand Master of the National Grand Lodge of Romania and R … L … Knights of the Temple for the documentary and photographic support granted for the achievement of this postage stamps issue.