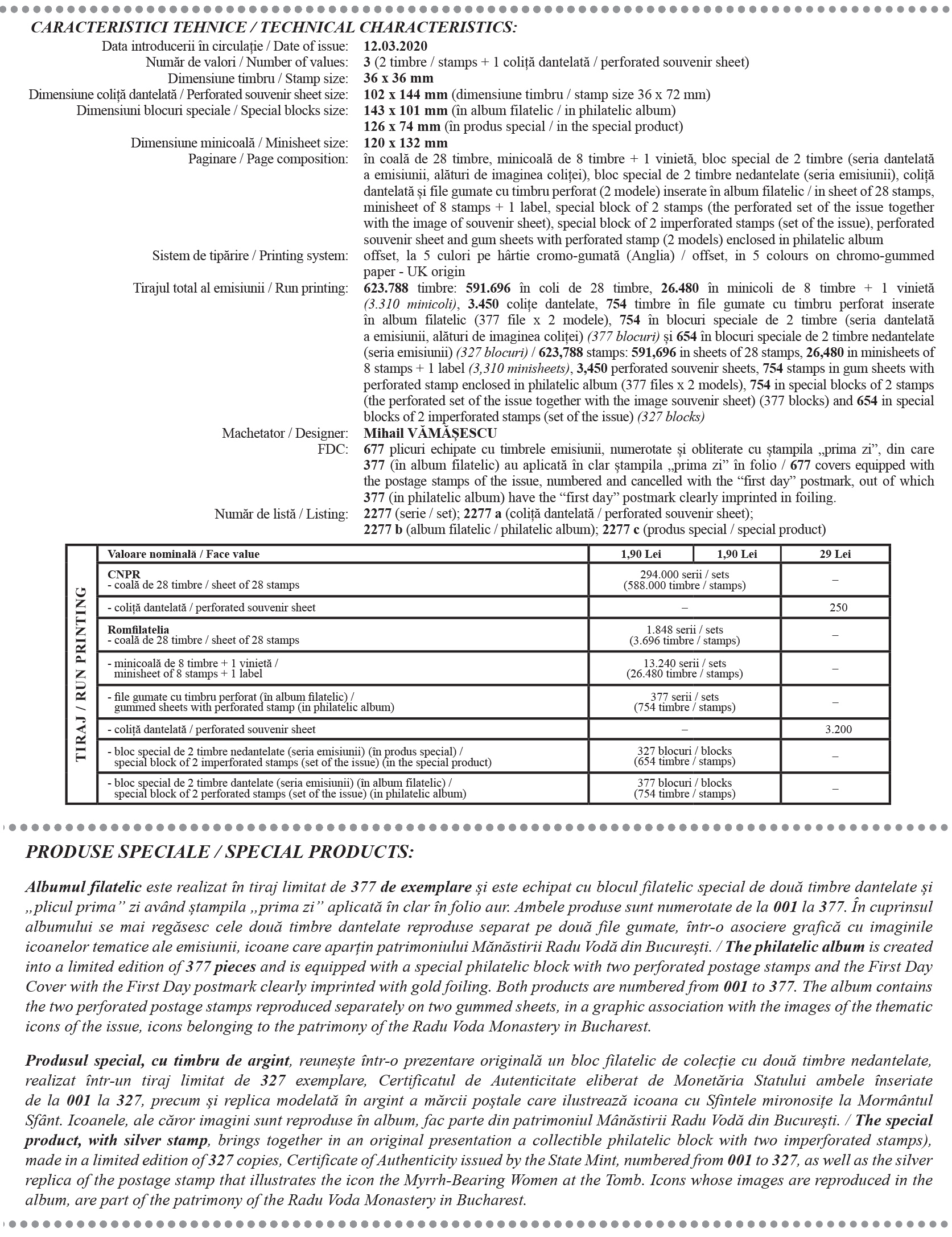 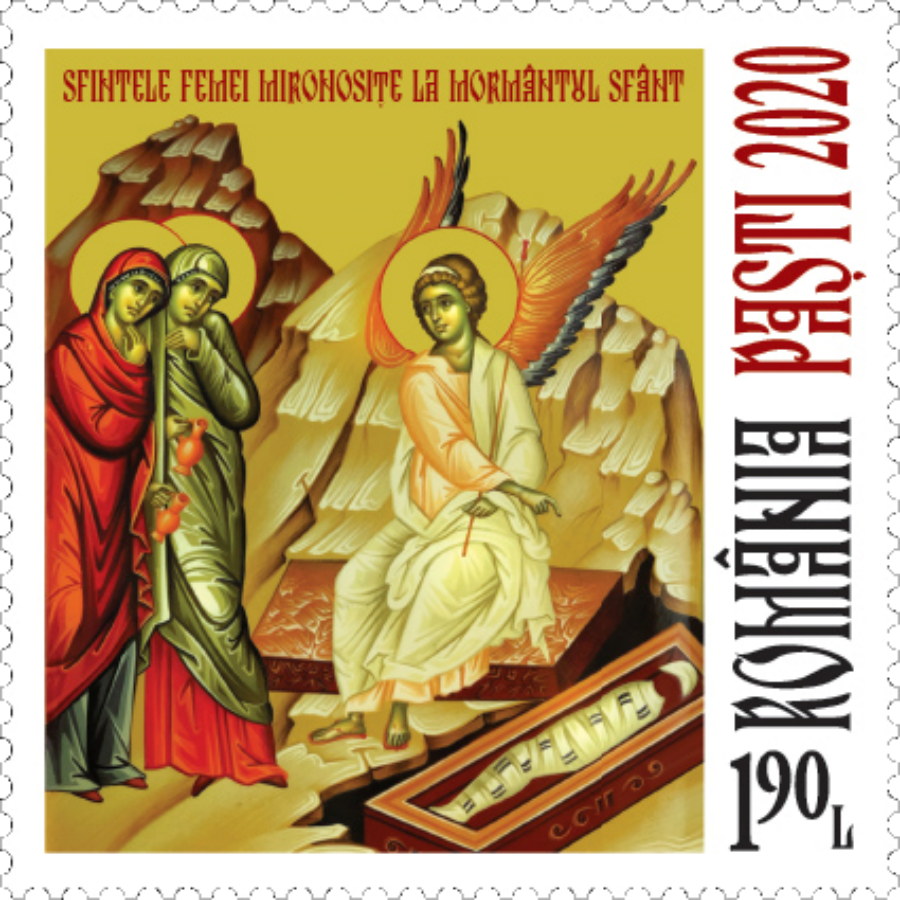 Easter begins, according to the Christian ritual, with a beautiful Sunday, inscribed on the Orthodox calendar as the Palm Sunday. It is the day that Jesus Christ, accompanied by a large crowd, entered Jerusalem. Laying over their cloths in His path, children, young men and elder people who had heard of His wonders welcomed Him with branches of persimmon in their hands, as the King of kings, as a victorious king over the kingdom of evil. “Hosanna to the Son of David! Blessed is he who comes in the name of the Lord! Hosanna in the highest heaven!”, they shouted. The perforated souvenir sheet with the face value of Lei 29 illustrates this scene suggestively.

After a few days, Jesus asks the disciples to prepare the place where the Last Supper will take place. In a large and beautiful gazebo, adorned with wallpaper and sofas, our Lord Jesus Christ took with his disciples what we call the Last Supper. Jesus sat at the table between Peter and John. For the last time, the disciples gathered around Him. Even the traitor Judah was among them. 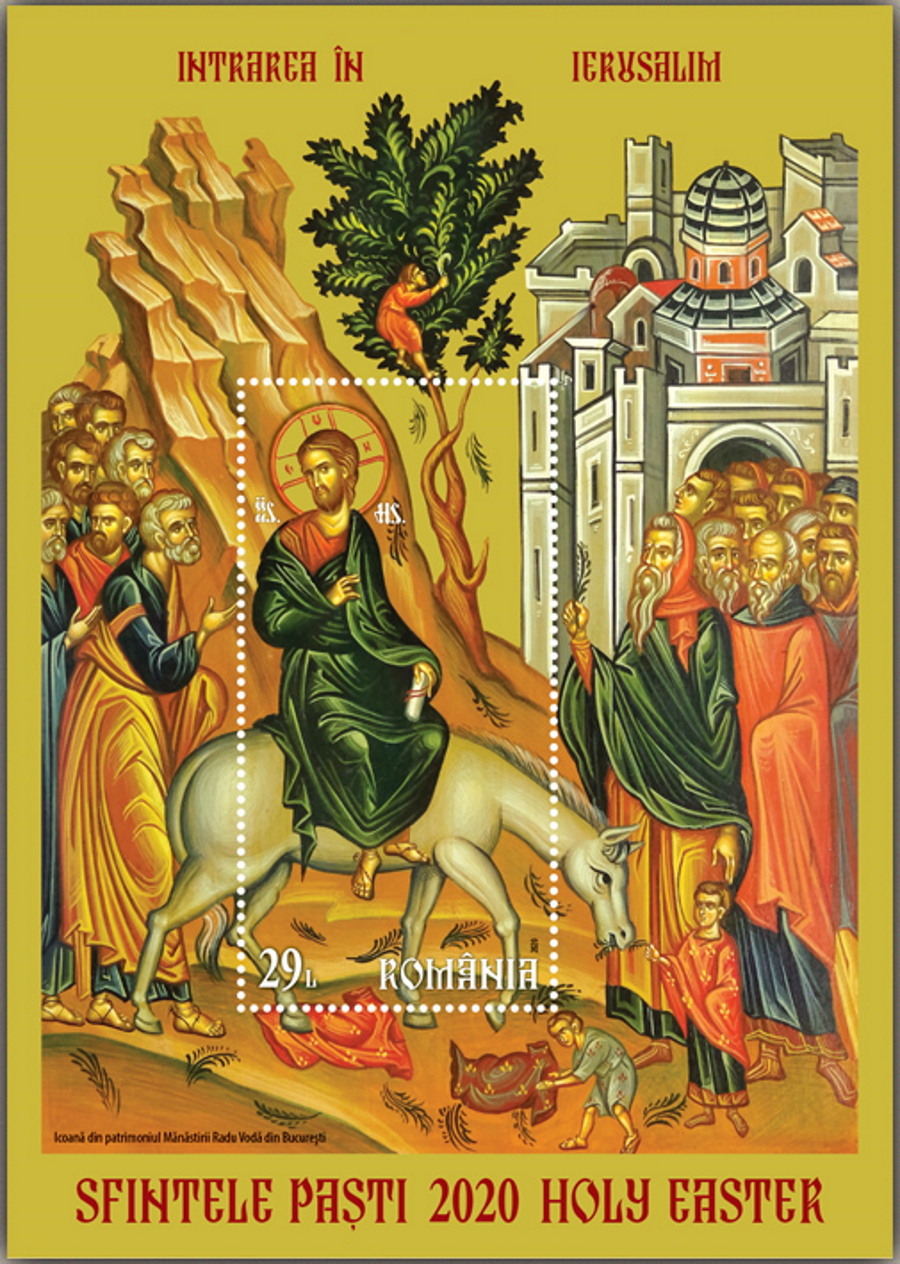 For the first time, at the Last Supper, the disciples of the Lord took Communion in a mystic way with the Body and Blood of Christ (symbolized by the leavened bread and red wine prepared for the meal). What did Jesus actually do? He offered each one according to his need: earthly food, a daily need, but also a soul food for the divine part of the human being, because the soul always longs for God.

In the darkness of the evening, the traitor Judas was doing his duty by offering to the messengers of the high priests, as a prisoner, Jesus. The crowd that cheered Him on the Palm Sunday later became hostile, demanding His death sentence. After the Sorrowful Way, a way of the ordeal, Christ was crucified, but according to biblical prophecies, He resurrected the third day. 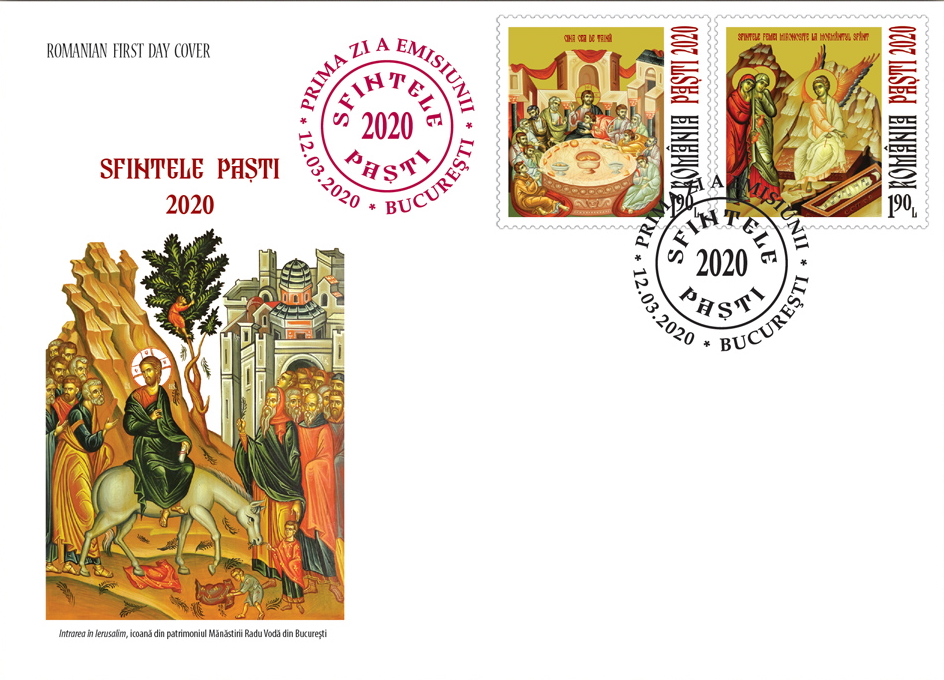 Known in the orthodox iconography as “The Myrrhbearers”, the two Marys who came to the tomb, with the thought of embalming with fragrances the dead body, found an empty tomb guarded by an angel, who said to them, “Do not be afraid. I know that you are looking for Jesus who was crucified. He is not here – he is risen, just as he said he would. Come and look at the place where he was lying. Then go quickly and tell his disciples that he has risen from the dead. And, listen, he goes before you into Galilee! You will see him there!”

The two postage stamps of the issue (with a face value of Lei 1.90 each) reproduce the images of the “The Last Supper” and “The Holy Myrrhbearing Women at the Holy Grave” icons, which are in the patrimony of the “Radu Voda” Monastery in Bucharest. 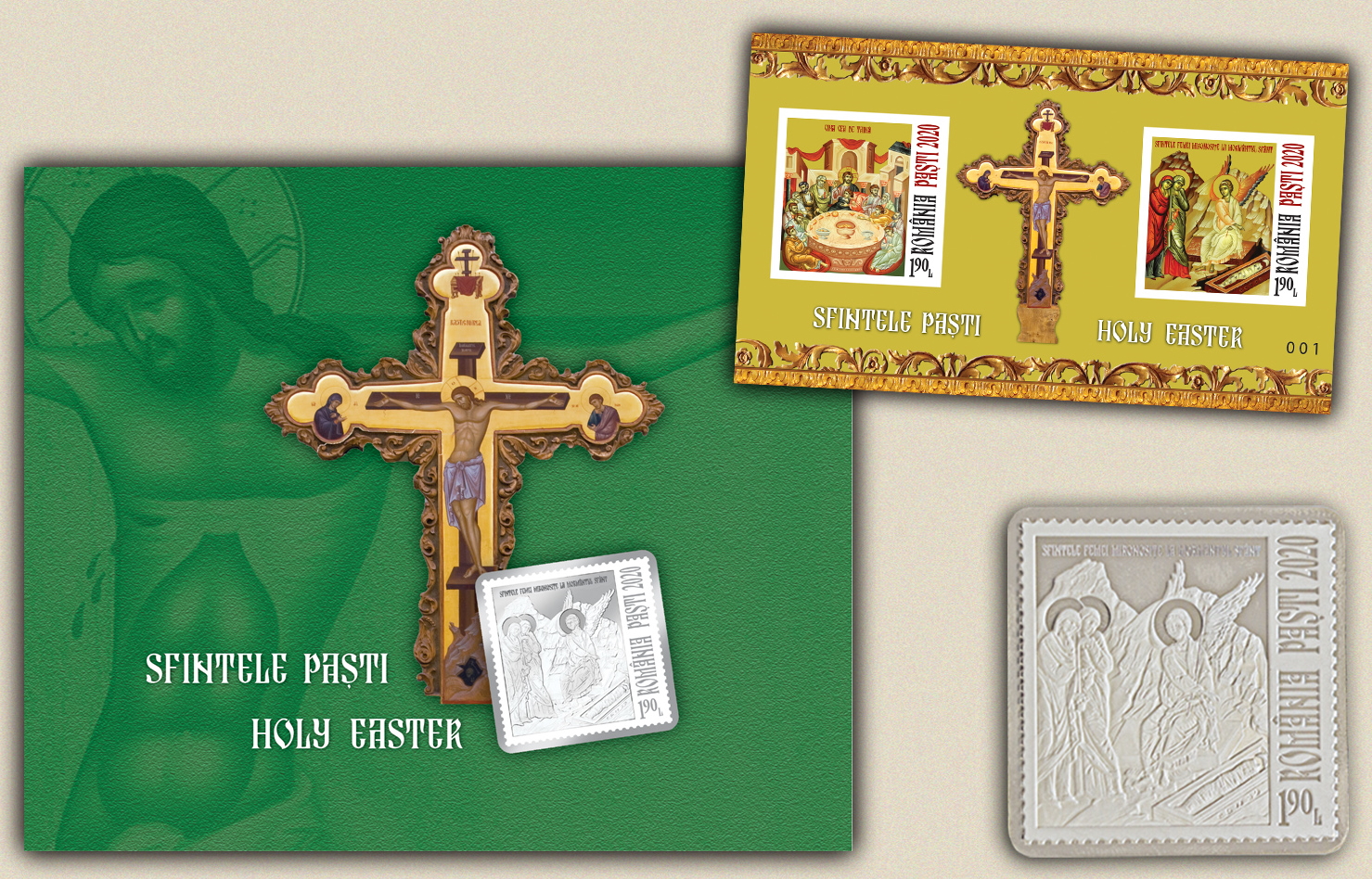 The keepers of the ancestral faith, the Christian faith, we, Romanians, must meet at the service on Holy Sunday of the Resurrection with the joy of a great holiday defined by a greeting of soul: Christ is Risen! He is Risen, indeed!

Romfilatelia brings thanks to the “Radu Voda” Monastery in Bucharest, for the blessing and the documentary support offered to the achievement this postage stamps issue. 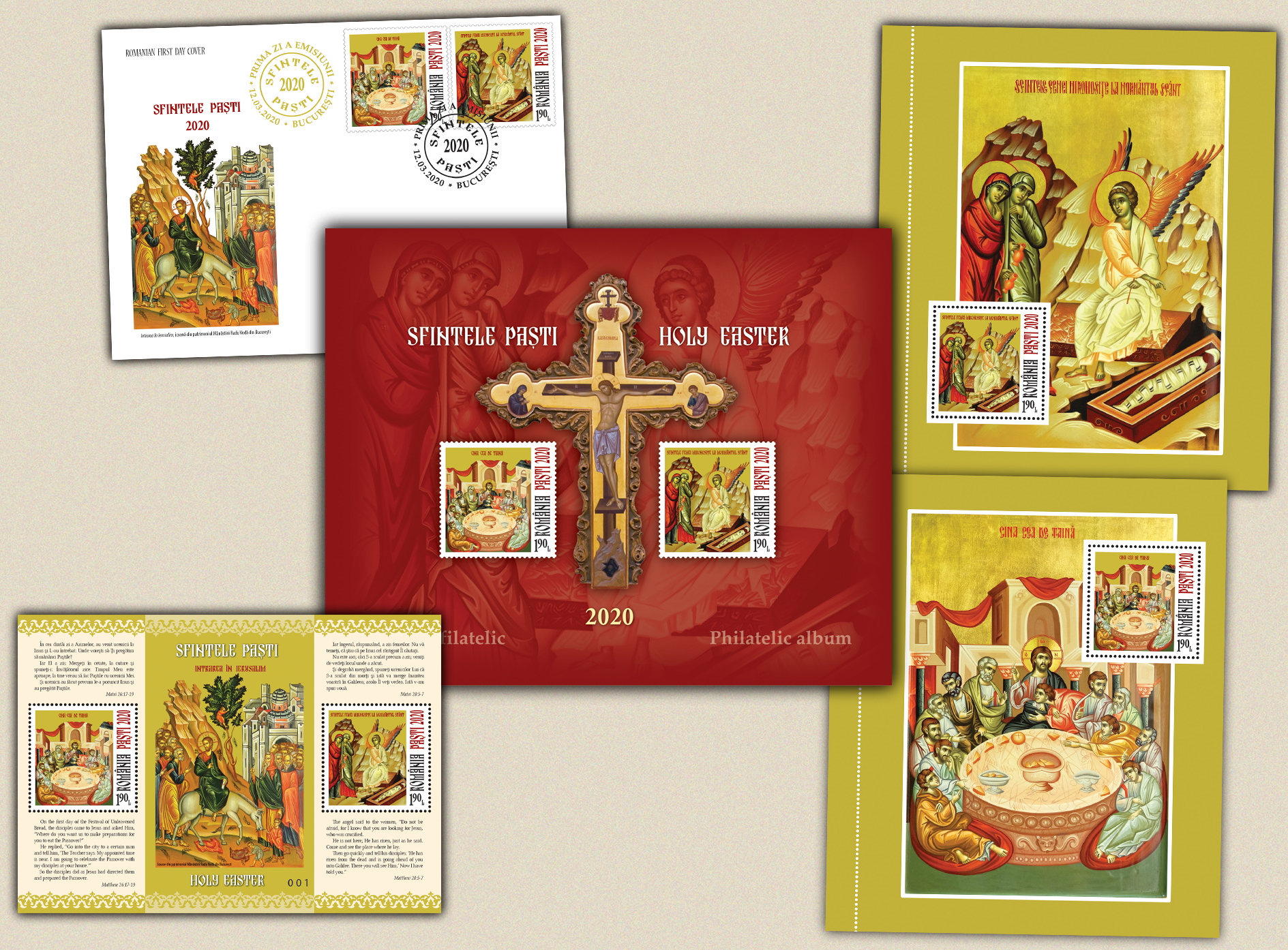 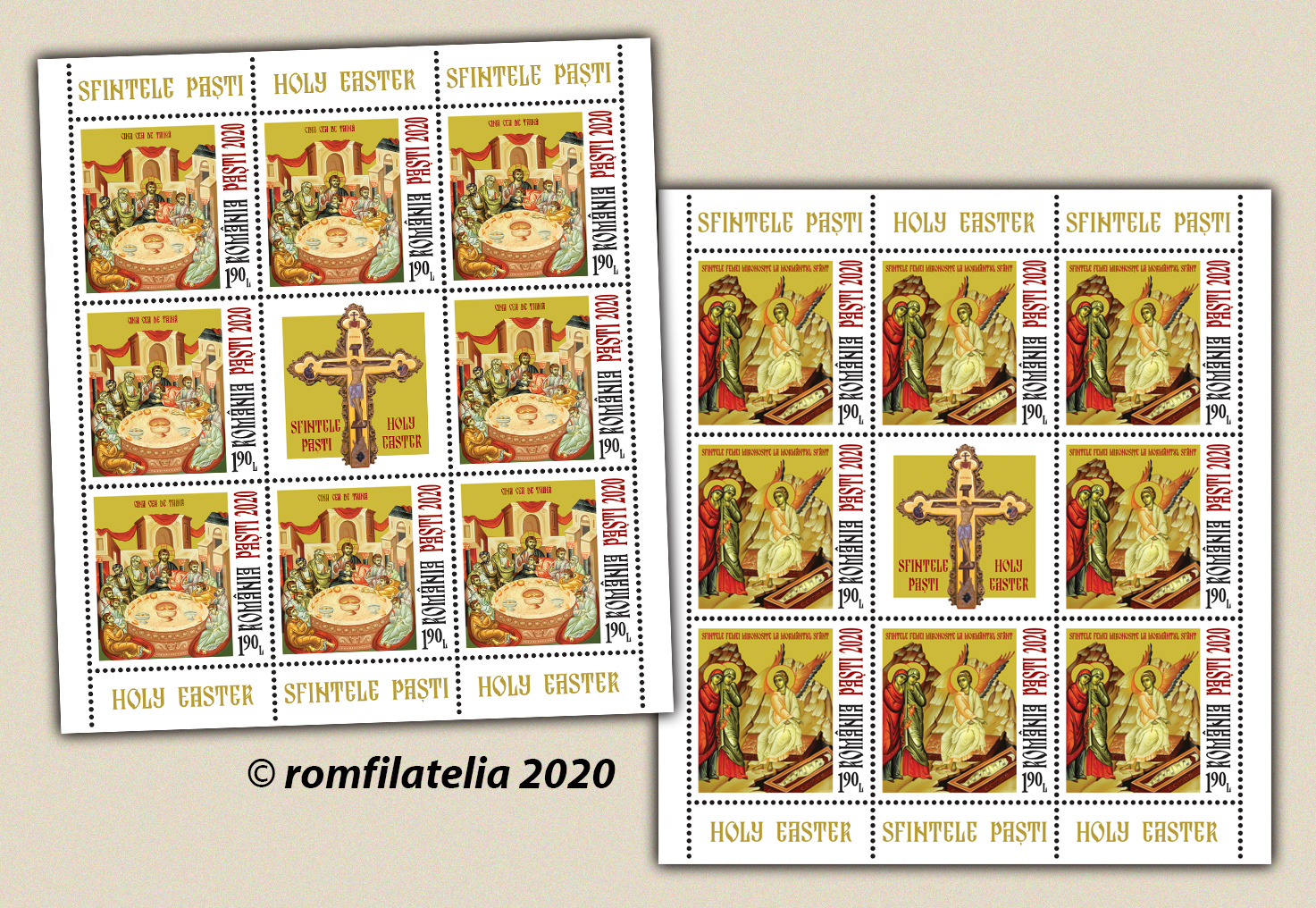