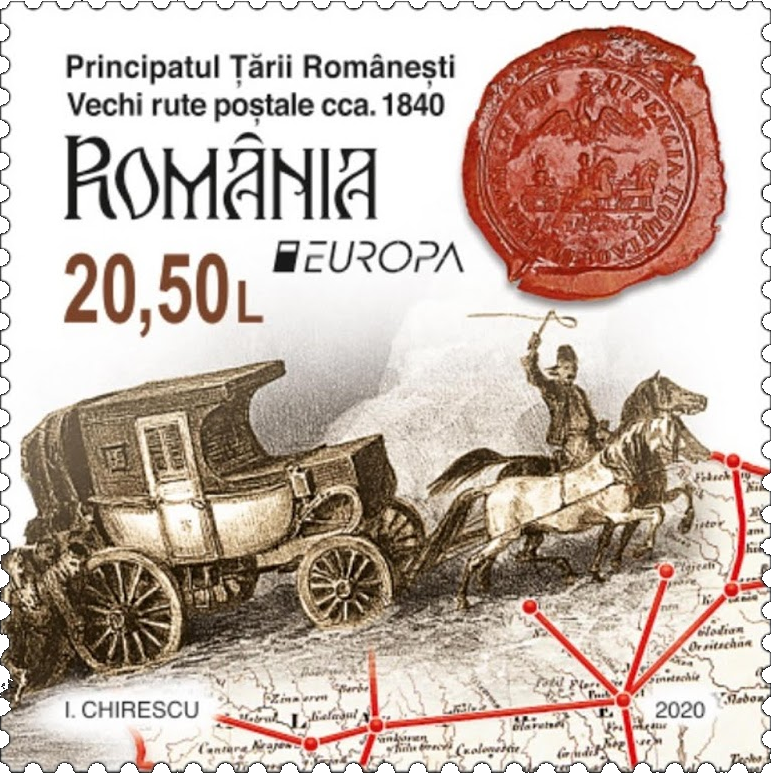 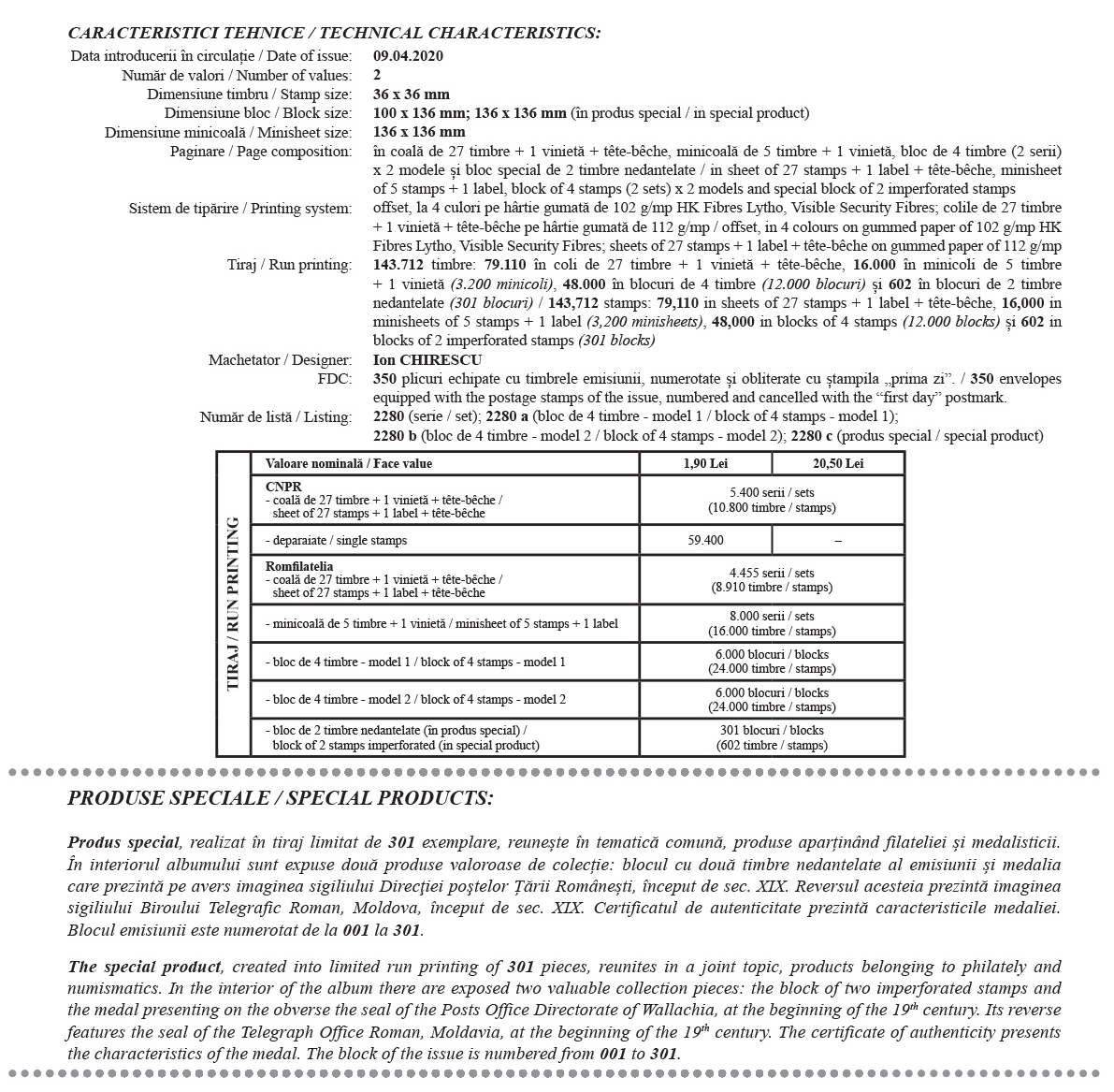 For this year, under the title Europa 2020, PostEurop, body of the Universal Postal Union, a United Nations specialized agency, has chosen the topic „Ancient postal routes”, a theme appreciated by collectors.

The issue consisting of two postage stamps, presented in an elaborate graphical manner, will be introduced into circulation on Thursday, April 9th.

In addition, the issue is completed by a special philatelic product with a medal presenting on the obverse the seal of the Posts Office Directorate in Wallachia. Its reverse features the seal of the Telegraph Office Roman, Moldova, at the beginning of the 19th century. 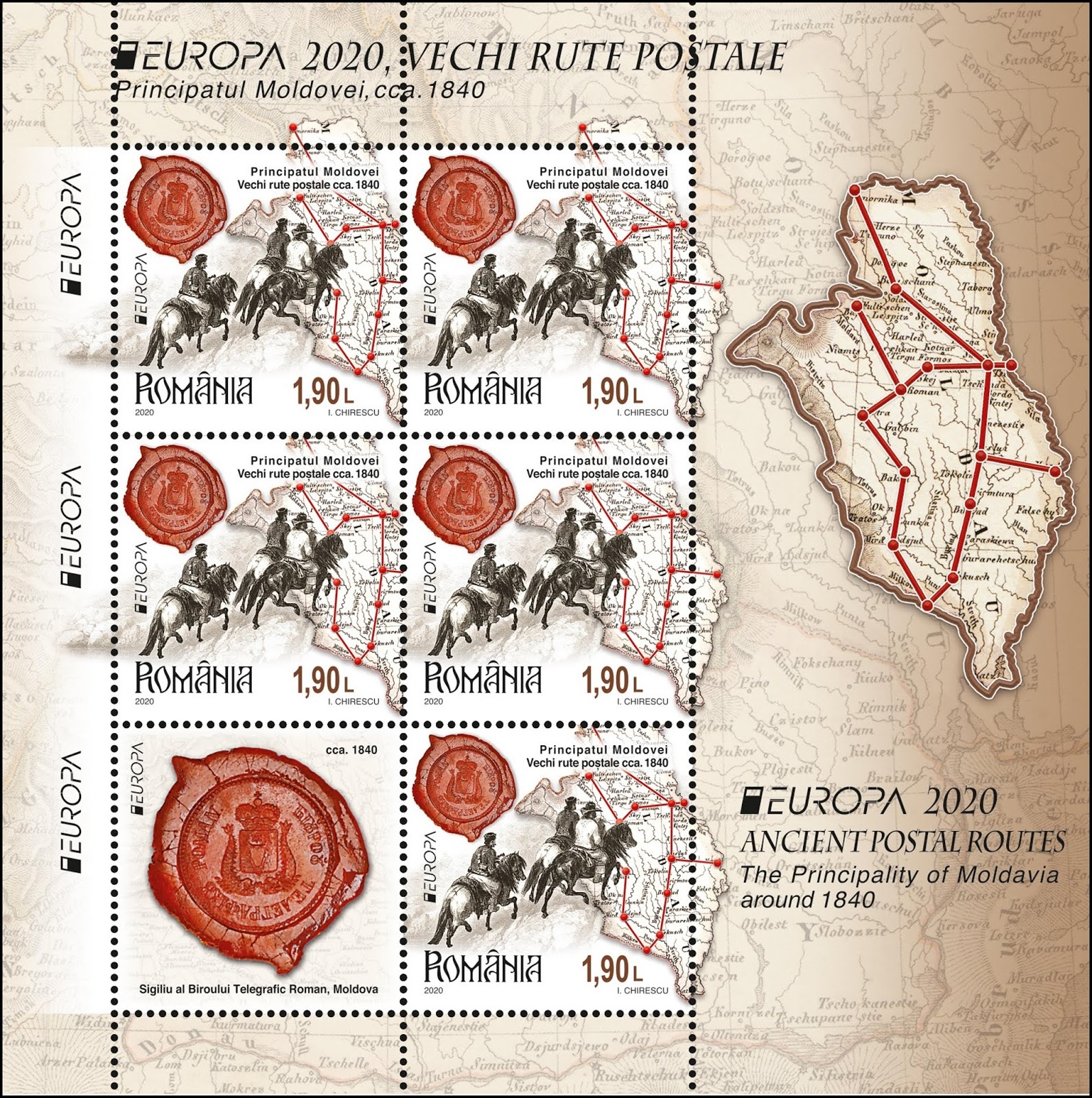 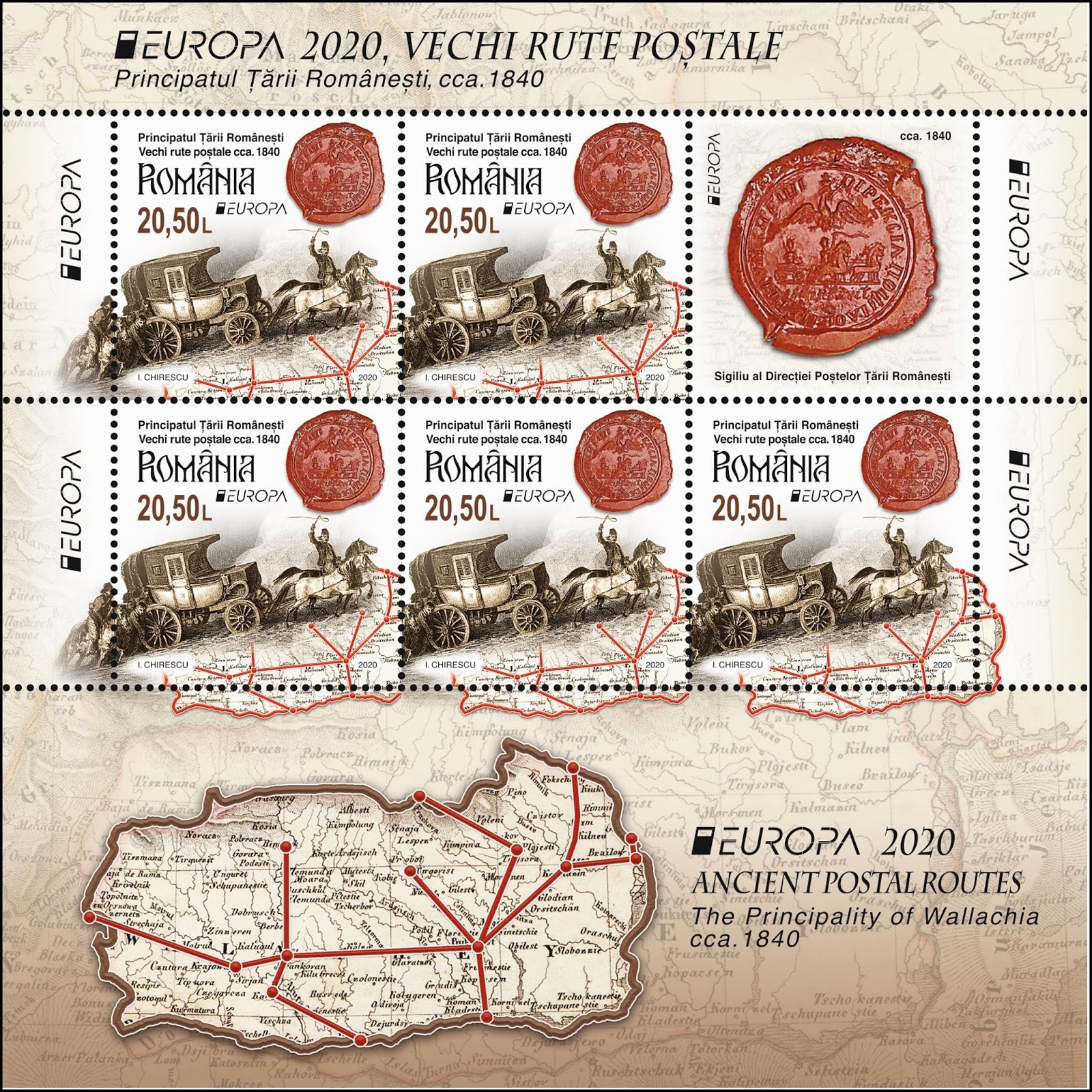 The need for mail transport dates back to ancient times. The first form organised and administered by the State was reported in the ancient writings as dating back from the time of the Roman Republic, with the introduction of the horseback mailmen service for fast mail and carriages for heavy transport mail. The emperor, the members of his house and the high officials of the empire benefited of this service, not the general public. Routes with regulated stops were organised from distance to distance, with stations and relays for feeding and changing horses, layover places. The stations and relays were run by civil servants appointed for a fixed period of time and who provided the supplies, services and supervised the staff. This form of organisation of the courier and postal service has been taken over and perpetuated over time, being considered to be the most efficient.

In the Romanian Principalities, in the 17th-18th centuries, the postal service was organised by the State and, with an authorisation from the Prince, individuals could also be transported by post chaise. The tolls for the maintenance of this postal service were incumbent upon the lower class population, the boyars and the civil servants being exempted. At the beginning of the 19th century, post relays called menziluri were set up, led by a menzil captain, where there were kept the horses and carriages (olace) needed to transport the State couriers, officials on a mission and persons authorised by the Prince to travel by post. For them, podorojna (n.t. written order to provide someone with post horses) travel documents were issued, on which the route, the name of the traveller, the number of horses necessary for transport, the date and the department were filled in. 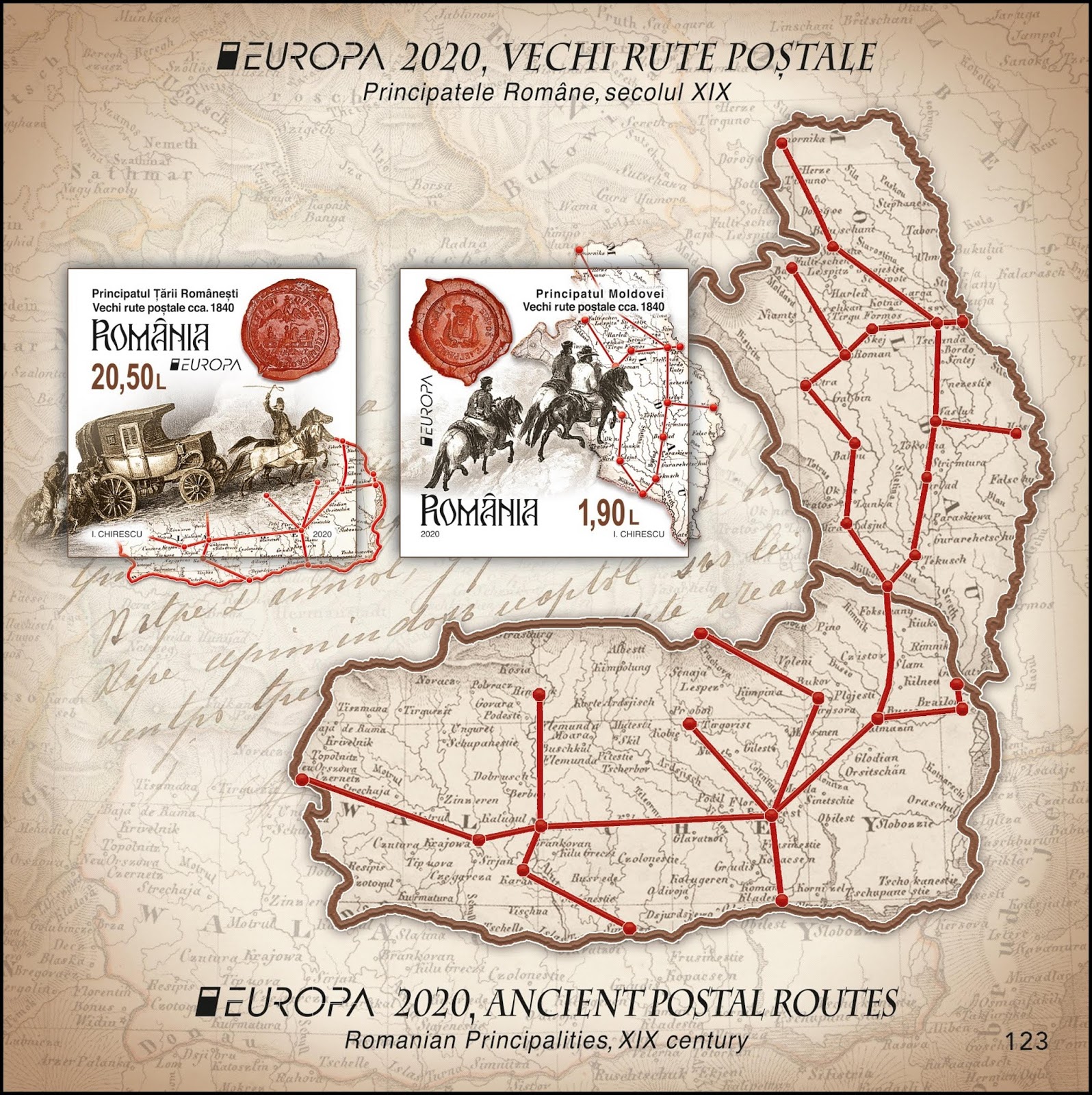 The postal service was provided from the budget of the country, but also from the taxes laid for transport and the tolls in cash or in kind collected from the population. The operation of the postal services was done by contractors with lease agreements concluded for periods of three or five years. The post directorates and post captains had special seals and stamps with the name of the post office or contractor. With the introduction of the Organic Regulation in the Romanian Principalities, in 1830, the fixed taxes by type of postal service, route and distance were introduced. A post relay had to have 20 horses and the stable had had to provide shelter for 30 horses.

The letters were charged according to the weight and the distance between the stations. By the agreement of 1833-1836, in Muntenia the contractors were allowed to double the tax per letter from 2 to 4 Parale / dram and by post office. As from August 1st, 1856, the tax for a standard letter was reduced to 2 Parale / dram.

In the Principality of Moldavia, the conditions for the execution of the postal services were negotiated by the State with four contractors, the contractor agreement effectively coming into force from 01.01.1852. 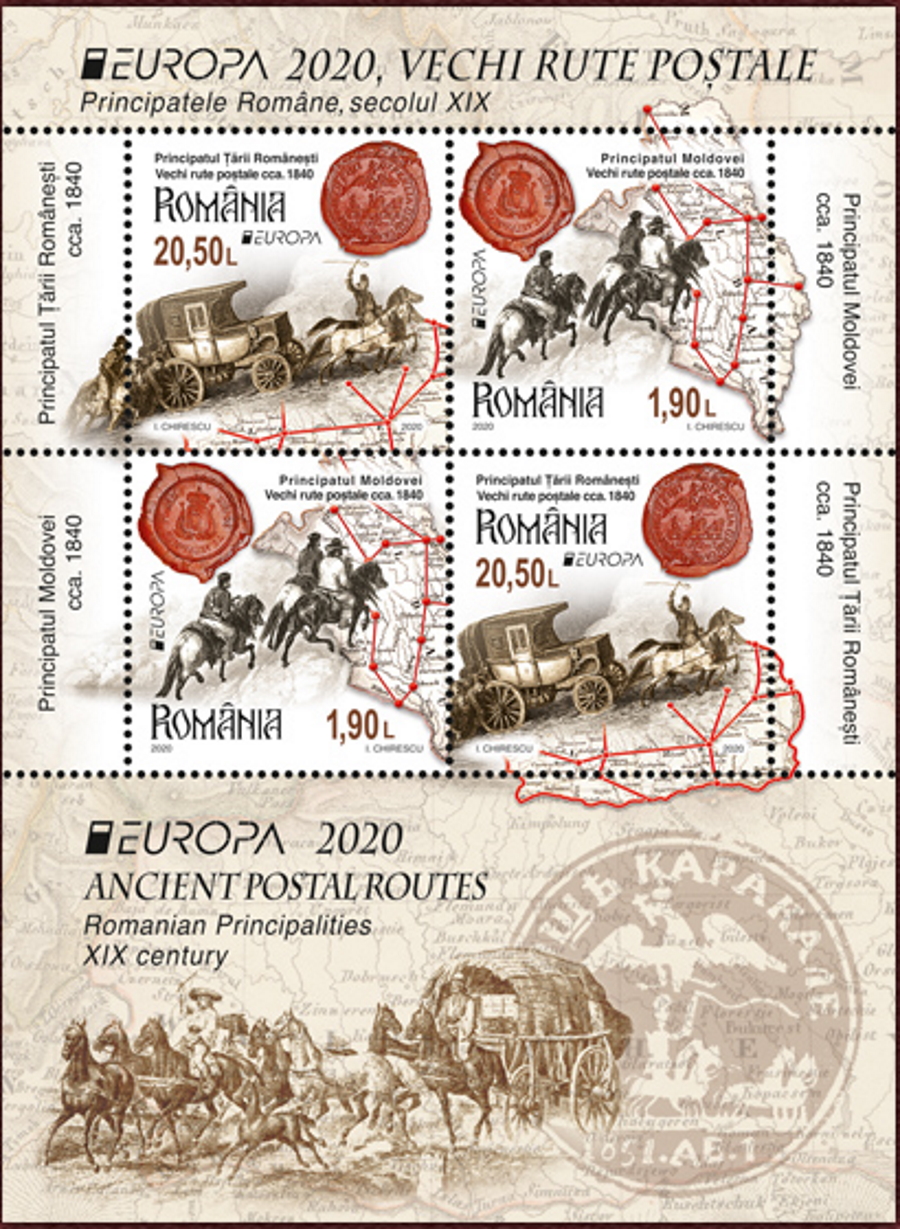 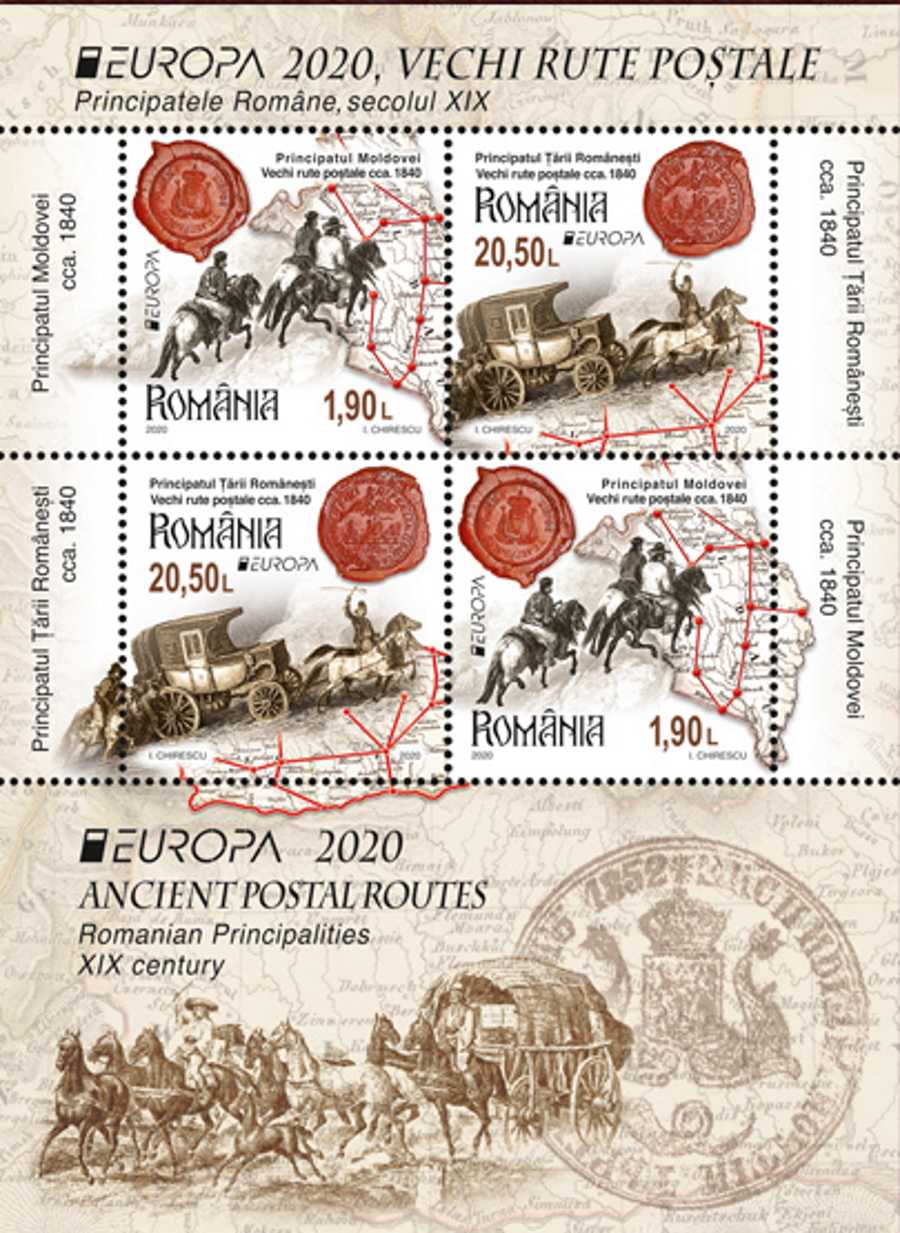 During the year 1851, the Administrative Council of Moldavia considered for debate the establishment of a service of post coaches that were to carry out bi-weekly drives transporting at the same time travellers, cargo, letters, packages, prints and money, with collection of taxes according to a special tariff. For travellers, in addition to the podorojna, a special print – a blanket or IHAM – was also issued, bearing the seal of the Ministry of Finance, which indicated the name of the traveller, the distance and the number of horses requested.

For these blankets, for each traveller, a tax of 5 parale by hour and by each horse registered in the blanket was levied. 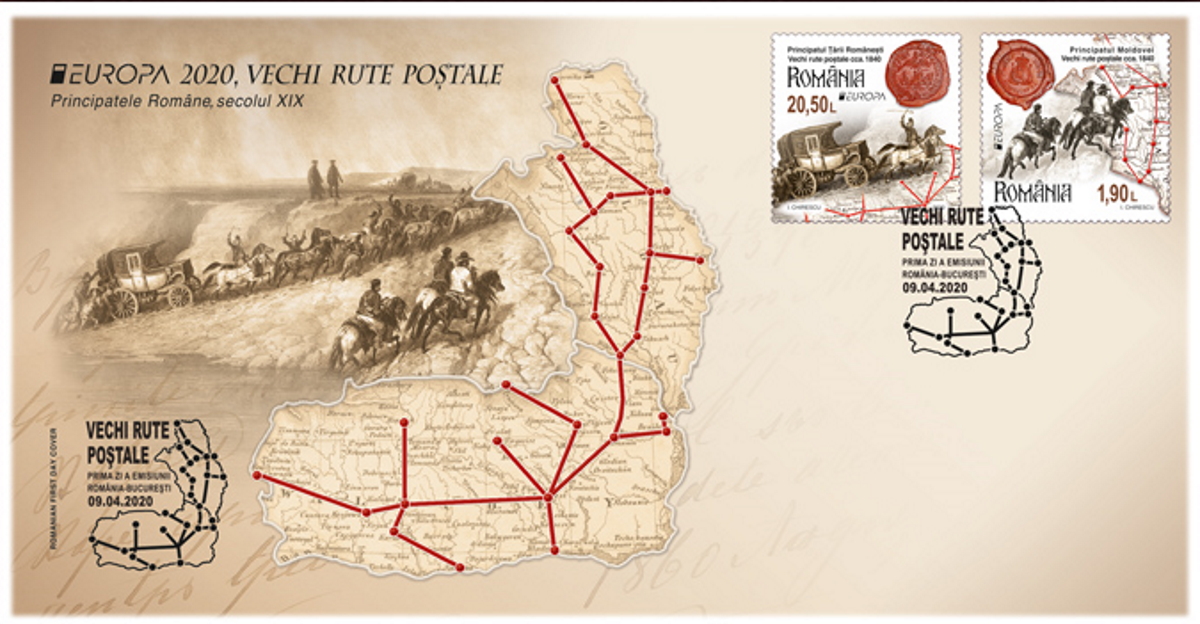 The example given by Moldavia, with the establishment of the post coach service, was immediately imitated by Muntenia, where, in April 1852, the first post coach on the Bucharest-Giurgiu route began to operate.

In the Principality of Wallachia, according to the agreement dated 1856-1861, the postal services were rented to 5 contractors: G. Zissu, C. Varzaru, A. Gheorghiu, A. Dumitrescu and Brezeanu and they were divided into 8 routes.

The postage stamp with the face value of Lei 1.90 graphically depicts the following elements: postal routes from Moldavia, detail from the lithography, Post riders in Moldavia, by Raffet (1839) and the seal of the Telegraph Office Roman, in Moldavia, around 1840. 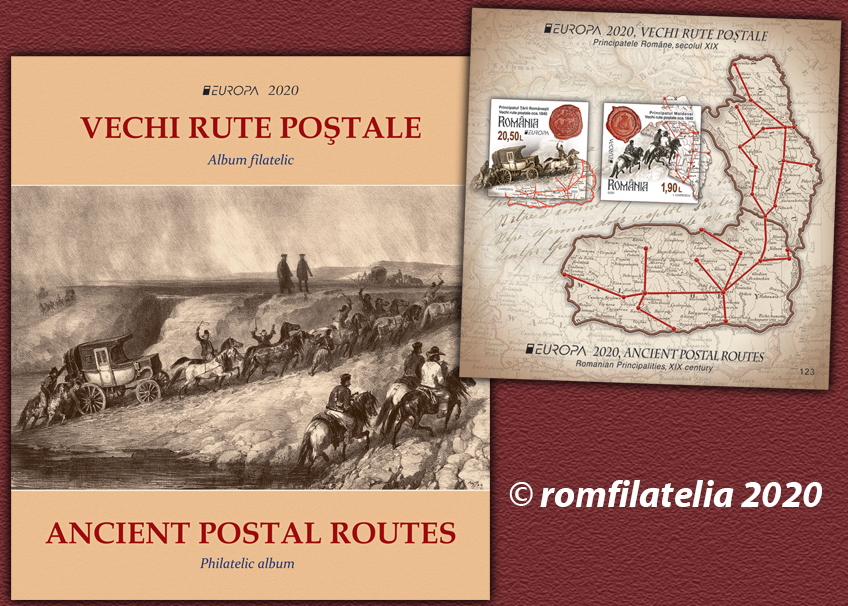 The postage stamp with the face value of Lei 20.50 illustrates the following elements: a post coach and postal routes within Wallachia, along with a detail from the lithography Post Coach Crossing Over the Buzau River, by Raffet (1839) and the seal of the Posts Office Directorate in Wallachia, around 1840.

The seals illustrated on the stamps are represented on postal documents from the collection of the Museum of Romanian Records.

The Romanian Principalities Map’s, used as background for the stamps and FDC layout, was taken from “Rümanien 1820-1872 – Fritz Heimbüchler, München 2002” and the routes were traced after “Istoria Poștelor Române, originea, desvoltarea și legislațiunea lor – Constantin N. Minescu, București, Imprimeria Statului, 1916 (pag. 153, 171)”, documents from the collection of the Museum of Romanian Records.