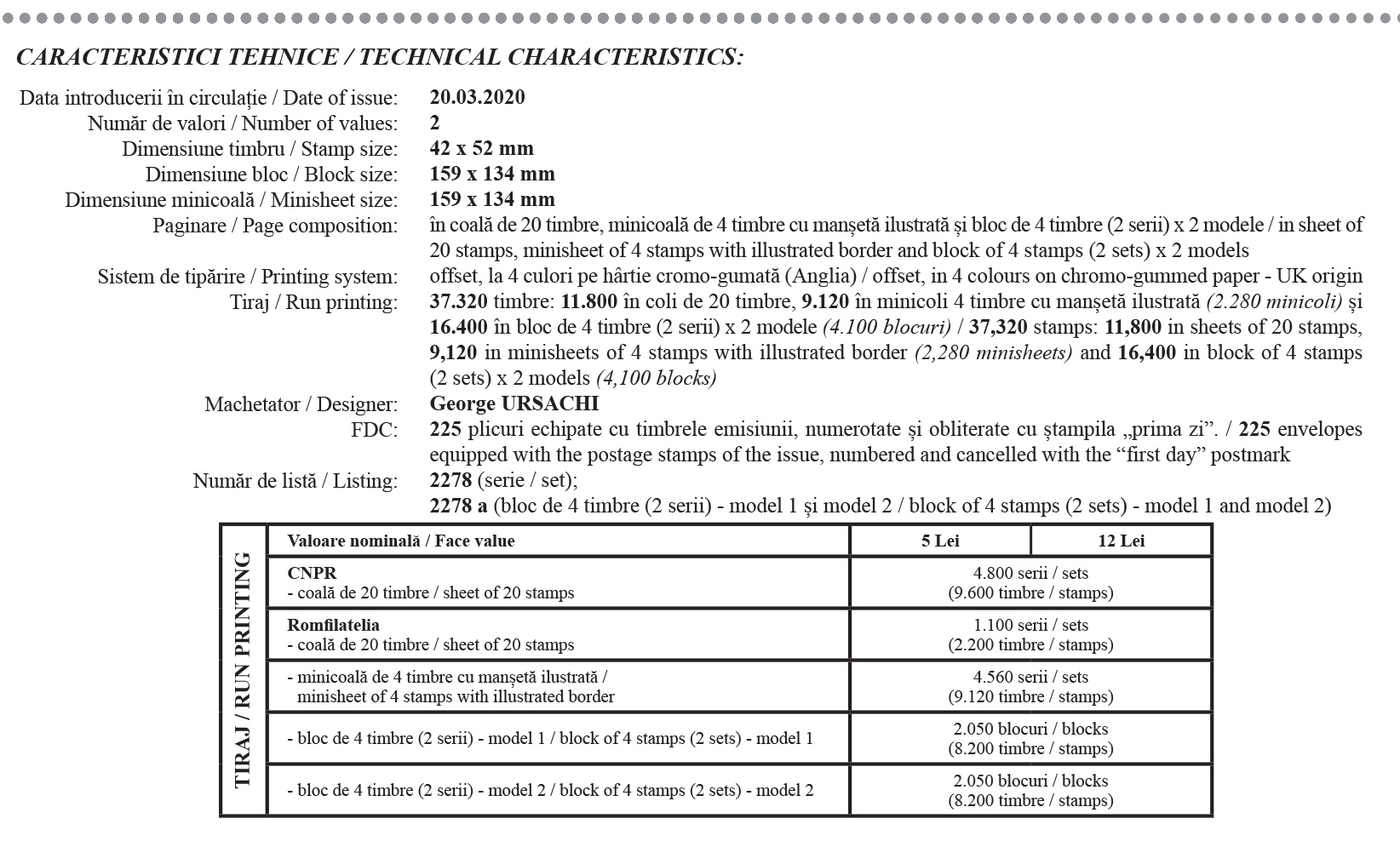 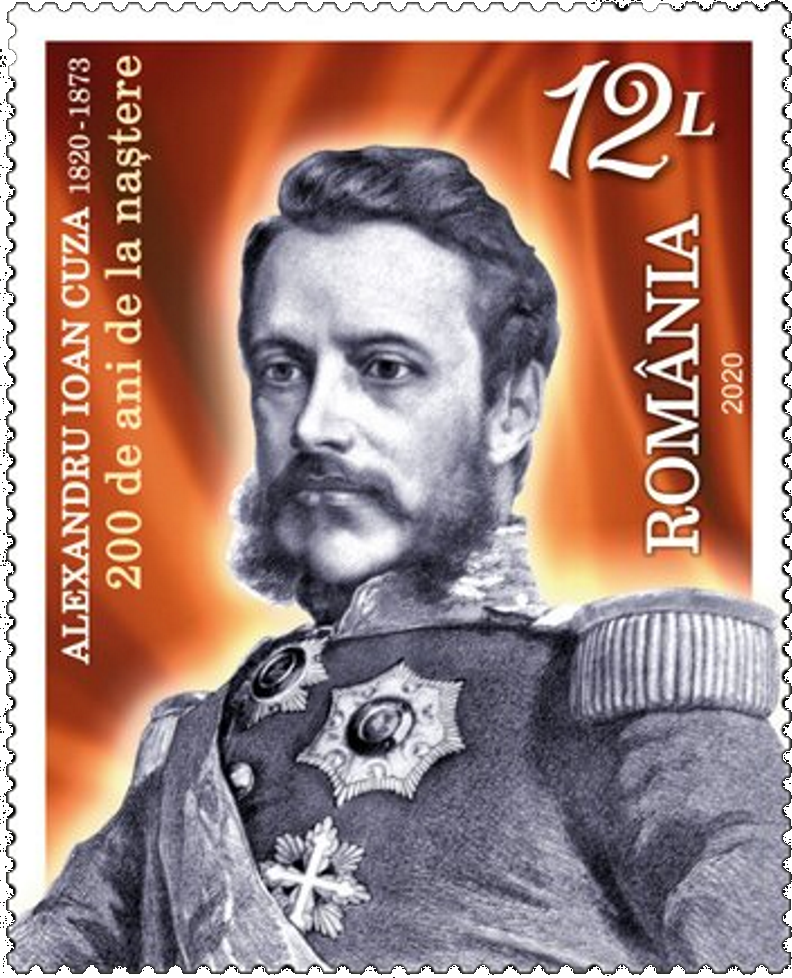 Alexandru Ioan Cuza was born on March 20th, 1820, in Barlad, in a family of Moldavian dignitaries (“dregator” in Romanian). He completed his studies in Iasi, where he has been colleague with Mihail Kogalniceanu and Vasile Alecsandri. In 1835 he was granted the high-school degree in Paris, then studied Law and Medicine, but he did not finish any of the faculties. In 1848 he has been among the speakers who took part in the assembly of revolutionaries at the Petersburg Hotel in Iasi, demanding democratic reforms. He was arrested after the collapse of the Revolution in Moldavia, but managed to escape and flee to Transylvania, where he attended the Great National Assembly in Blaj, in May 1848. 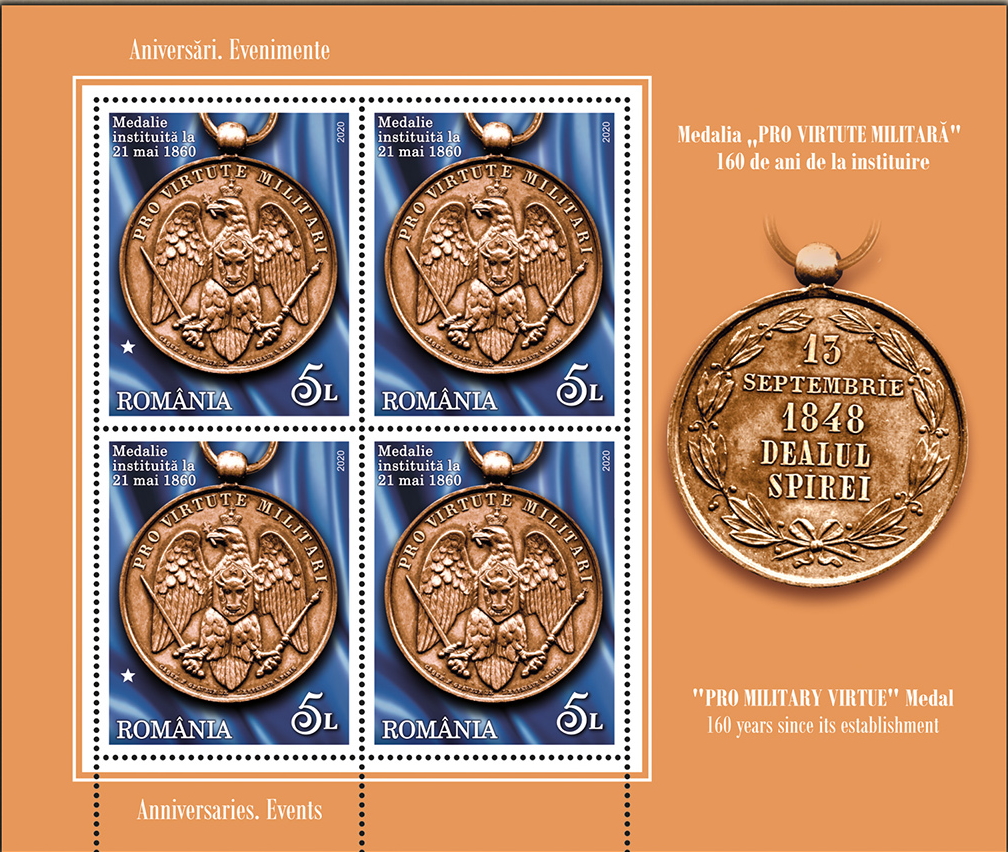 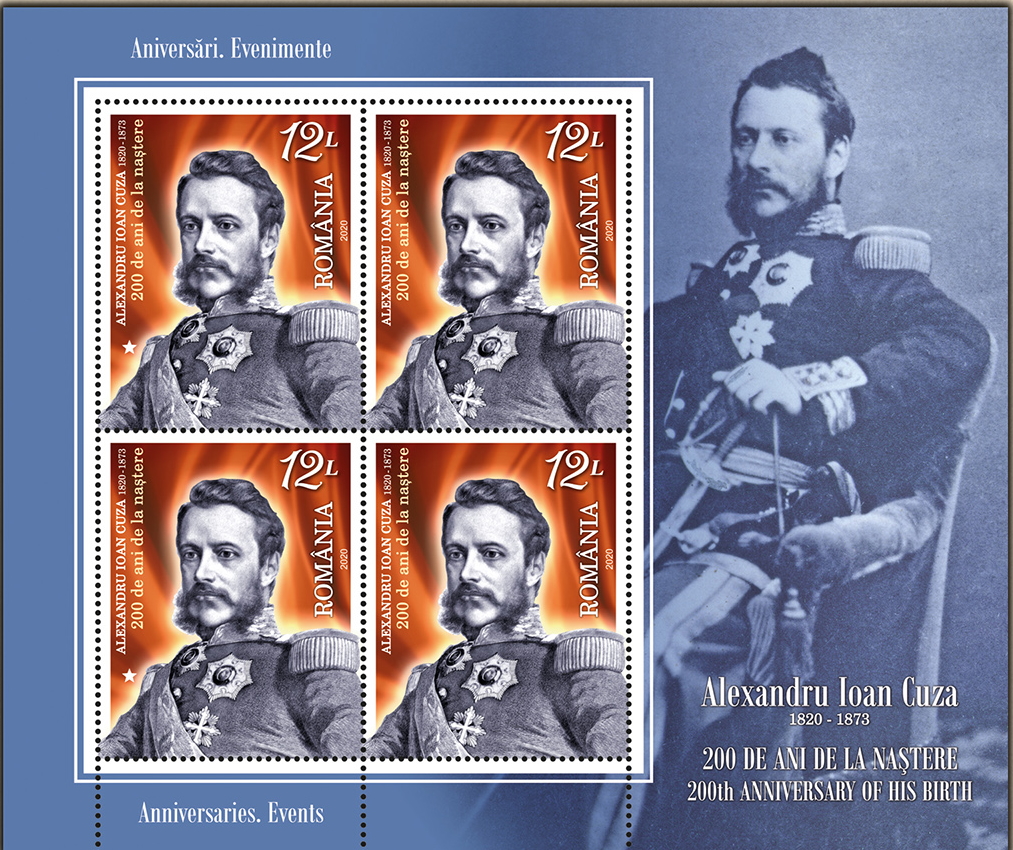 In the following years he held several positions in the Moldavian administration – chairman of the Covurlui Court (1849-1851 and 1855-1856), director of the Ministry of Interior (1851), burgrave (“parcalab” in Romanian) of Galati (1856). After the adoption of the 1858 Paris Convention, he was involved in the political reorganization of Moldavia, and eventually he was preferred to reign by both liberals and conservatives.

After the Union, Alexandru Ioan Cuza, supported by Mihail Kogalniceanu, initiated the first reforms to modernize the country. Under his reign, the Union was recognized by the Great Powers, the first unitary Parliament and the first unitary Government were created, and the electoral reform, the secularization of fortunes belonging to monasteries, the agrarian reform, the education reform, etc. were adopted.

Because he established an authoritarian regime, the Ruler was removed on February 11th, 1866 by the “monstrous coalition”, a group of liberal and conservative politicians, as well as militaries or merchants. Cuza was forced to leave the country, living in Vienna, Paris and Florence. He died on May 15th, 1873, aged 53, while undergoing treatment in the German city of Heidelberg. 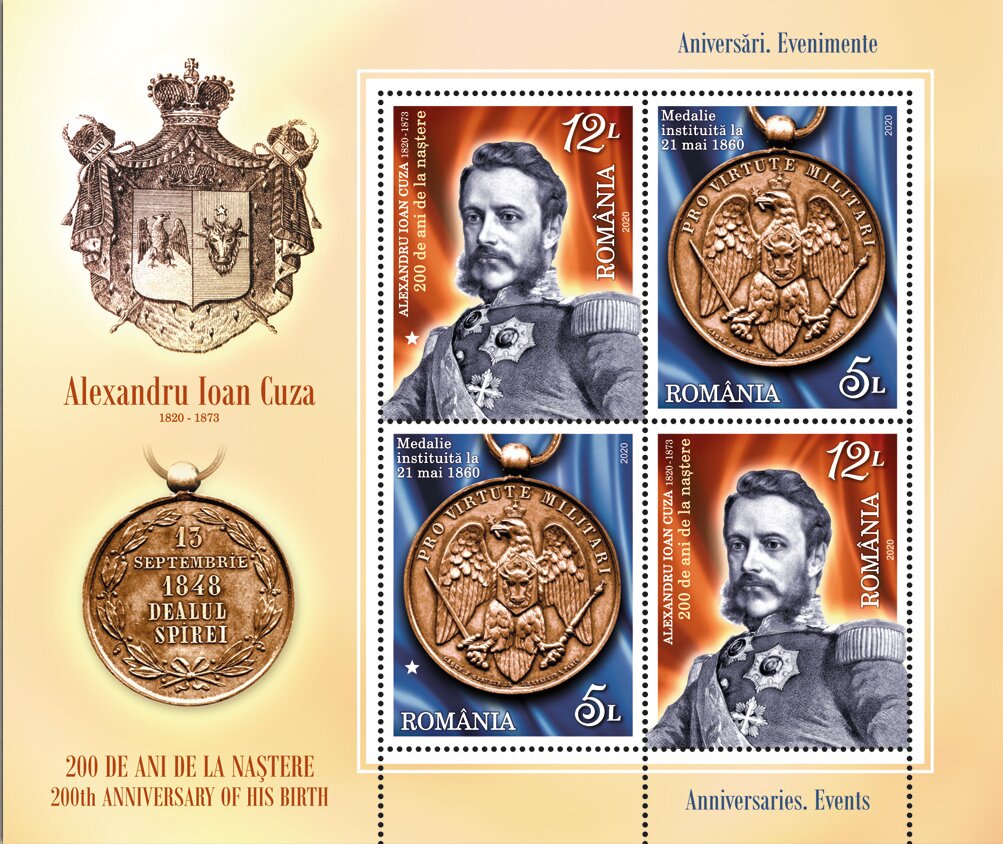 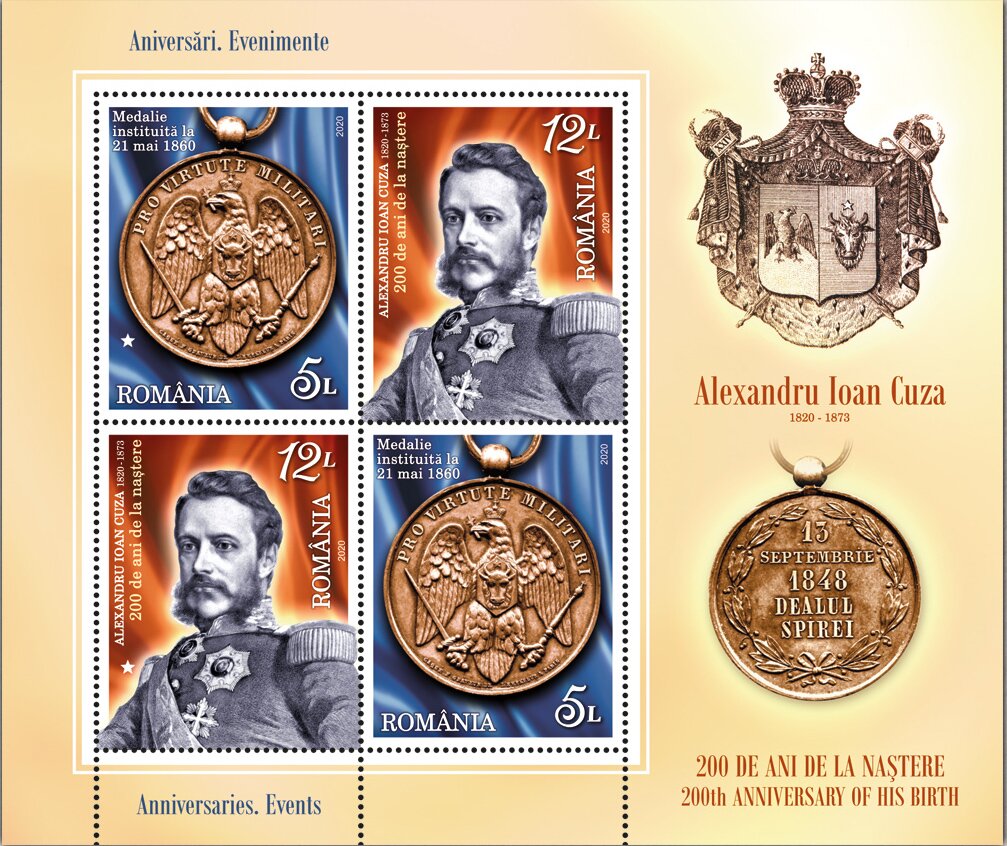 On the postage stamp with the face value of Lei 5 is represented the obverse of the “PRO MILITARY VIRTUE” Medal.

Cuza approved to mint a medal commemorating the fight on Dealul Spirei of the Romanian firefighters with the Turks, for which he issued the Royal Decree no. 78 of May 21st, 1860.

The decoration was made of bronze, round, with a diameter of 32.5 mm. On the obverse, as embossed pattern, it was blazoned a crowned eagle, with cross in the beak, with sword and sceptre in the two claws; on the chest it was the head of aurochs with the 5-pointed star between the horns. At the top, the inscription “PRO MILITARY VIRTUE” could be read, and at the bottom it appeared the name of the engraver from Paris, Caque F.

On the reverse of the medal (graphicaly represented on the illustrated border of the philatelic blocks of the issue) it was written: “September 13th, 1848, Dealul Spirei”. The blue ribbon had two stripes on each edge, one red on the outside and one yellow on the inside. 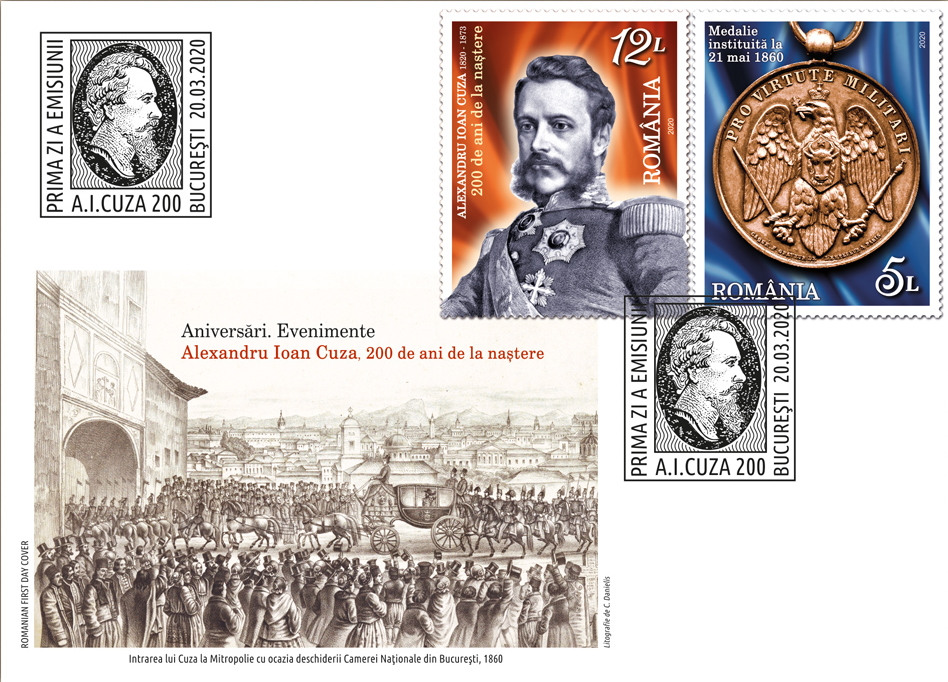 On the postage stamp with the face value of Lei 12 is represented the bust-portrait of Alexandru Ioan Cuza in military uniform.

On the First Day Cover is illustrated a lithography by C. Danielis, referring to Cuza’s Entry to the Metropolitan on the occasion of the opening of the National Chamber of Bucharest in 1860.

Romfilatelia thanks to Professor Corneliu Andonie from the National Military Museum “Kind Ferdinand I” and the representatives of the Romanian Academy Library in Bucharest and the City Hall of Iasi for the documentary and photographic support granted to this postage stamp issue.