Under the Soviet Union, the Kyrgyz SSR postal service was an integral part of the Soviet system. Kyrgyzstan (or the Kyrgyz Republic) declared its independence in August 1991 and issued its first postage stamps on 4 February 1992.  The nation has two designated postal operators — the original Kyrgyz Post (Кыргыз Почтасы. Kyrgyz Pochtasy SE) and the Kyrgyz Express Post LLC which issued its first stamps on 18 November 2014.

Pomegranates: A Gift of Nature 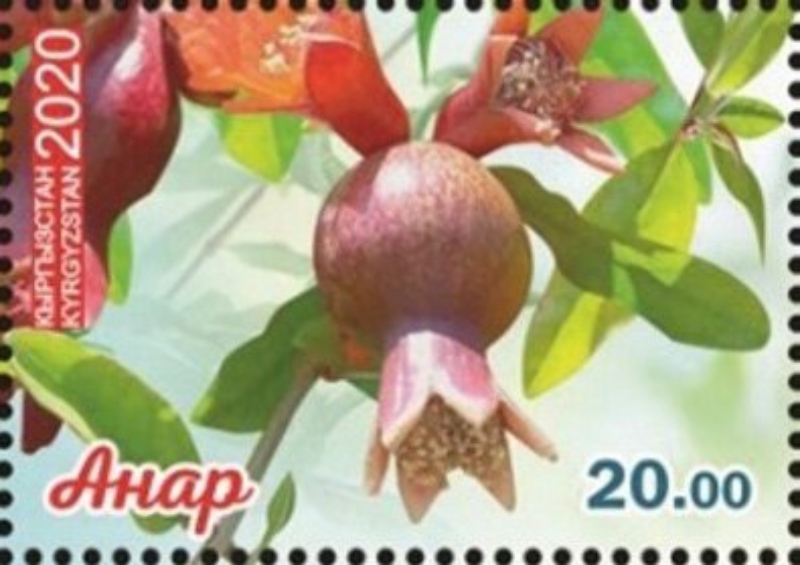 The pomegranate (Punica granatum) is a fruit-bearing deciduous shrub in the family Lythraceae, subfamily Punicoideae, that grows between 5 and 10 m (16 and 33 ft) tall.

The pomegranate originated in the region extending from Iran to northern India, and has been cultivated since ancient times throughout the Mediterranean region. It was introduced into Spanish America in the late 16th century and into California by Spanish settlers in 1769.

The fruit is typically in season in the Northern Hemisphere from September to February, and in the Southern Hemisphere from March to May. As intact sarcotestas or juice, pomegranates are used in baking, cooking, juice blends, meal garnishes, smoothies, and alcoholic beverages, such as cocktails and wine. 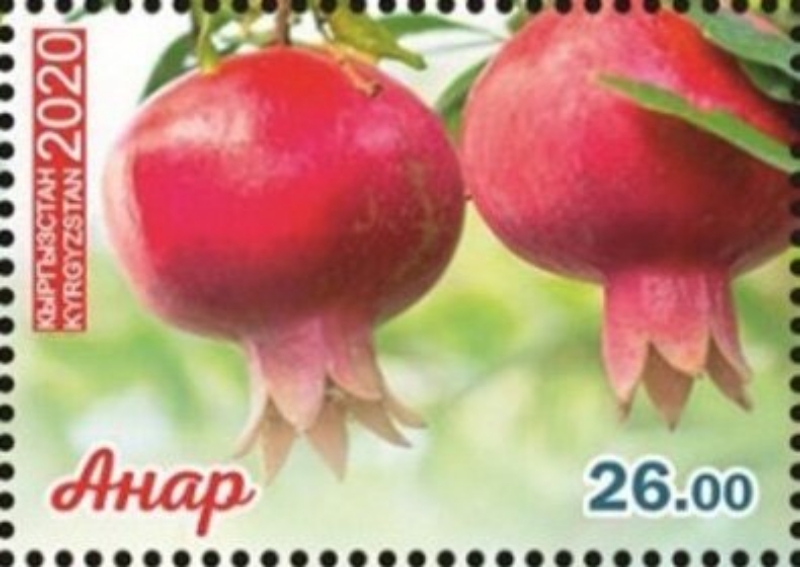 Today, it is widely cultivated throughout the Middle East and Caucasus region, north and tropical Africa, the Indian subcontinent, Central Asia, the drier parts of southeast Asia, and parts of the Mediterranean Basin. It is also cultivated in parts of Arizona and the San Joaquin Valley in California. In the 20th and 21st centuries, it has become more common in the shops and markets of Europe and the Western Hemisphere.

The name pomegranate derives from medieval Latin pōmum “apple” and grānātum “seeded”. Possibly stemming from the old French word for the fruit, pomme-grenade, the pomegranate was known in early English as “apple of Grenada” — a term which today survives only in heraldic blazons. This is a folk etymology, confusing the Latin granatus with the name of the Spanish city of Granada, which derives from Arabic.

Garnet derives from Old French grenat by metathesis, from Medieval Latin granatum as used in a different meaning “of a dark red color”. This derivation may have originated from pomum granatum, describing the color of pomegranate pulp, or from granum, referring to “red dye, cochineal”.

The French term for pomegranate, grenade, has given its name to the military grenade. 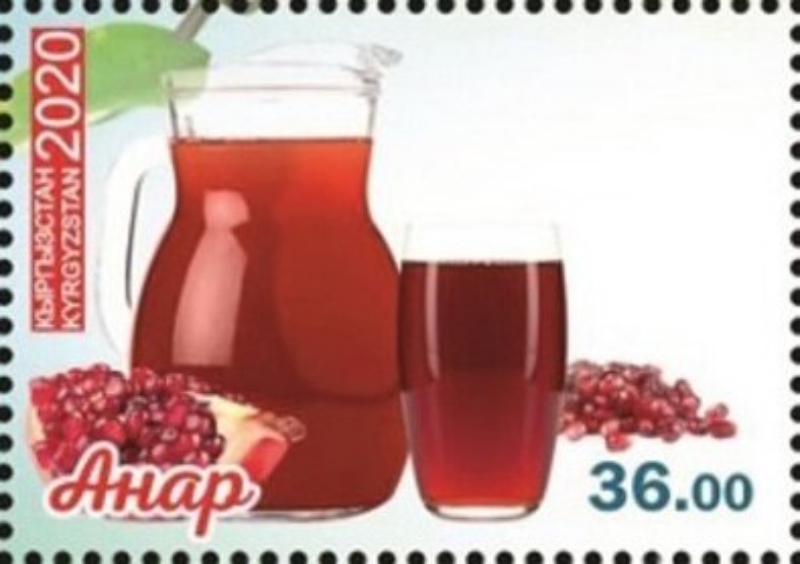 A shrub or small tree growing 5 to 10 m (16 to 33 ft) high, the pomegranate has multiple spiny branches and is extremely long-lived, with some specimens in France surviving for 200 years. P. granatum leaves are opposite or subopposite, glossy, narrow oblong, entire, 3–7 cm (1 1⁄4–2 3⁄4 in) long and 2 cm (3⁄4 in) broad. The flowers are bright red and 3 cm (1.2 in) in diameter, with three to seven petals. Some fruitless varieties are grown for the flowers alone.

Red-purple in color, the pomegranate fruit husk has two parts: an outer, hard pericarp, and an inner, spongy mesocarp (white “albedo”), which comprises the fruit inner wall where seeds attach. Membranes of the mesocarp are organized as nonsymmetrical chambers that contain seeds inside sarcotestas, which are embedded without attachment to the mesocarp. Containing juice, the sarcotesta is formed as a thin membrane derived from the epidermal cells of the seeds. The number of seeds in a pomegranate can vary from 200 to about 1,400. 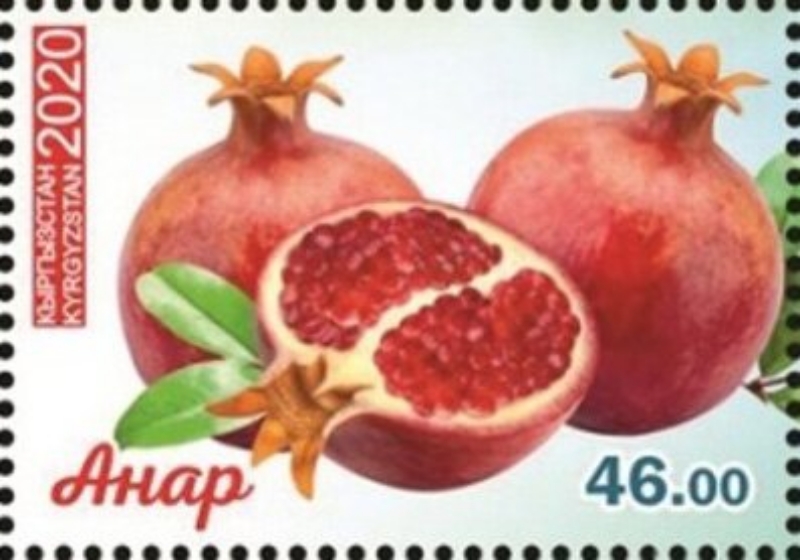 Botanically, the edible fruit is a berry with seeds and pulp produced from the ovary of a single flower.[ The fruit is intermediate in size between a lemon and a grapefruit, 5–12 cm (2–5 in) in diameter with a rounded shape and thick, reddish husk.

In mature fruits, the juice obtained by compressing the seeds yields a sour flavor due to low pH (4.4) and high contents of polyphenols, which may cause a red indelible stain on fabrics. Primarily, the pigmentation of pomegranate juice results from the presence of anthocyanins and ellagitannins.

P. granatum is grown for its fruit crop, and as ornamental trees and shrubs in parks and gardens. Mature specimens can develop sculptural twisted-bark multiple trunks and a distinctive overall form. Pomegranates are drought-tolerant, and can be grown in dry areas with either a Mediterranean winter rainfall climate or in summer rainfall climates. In wetter areas, they can be prone to root decay from fungal diseases. They can be tolerant of moderate frost, down to about −12 °C (10 °F).[16]

After the pomegranate is opened by scoring it with a knife and breaking it open, the seeds are separated from the peel and internal white pulp membranes. Separating the seeds is easier in a bowl of water because the seeds sink and the inedible pulp floats. Freezing the entire fruit also makes it easier to separate. Another effective way of quickly harvesting the seeds is to cut the pomegranate in half, score each half of the exterior rind four to six times, hold the pomegranate half over a bowl, and smack the rind with a large spoon. The seeds should eject from the pomegranate directly into the bowl, leaving only a dozen or more deeply embedded seeds to remove. 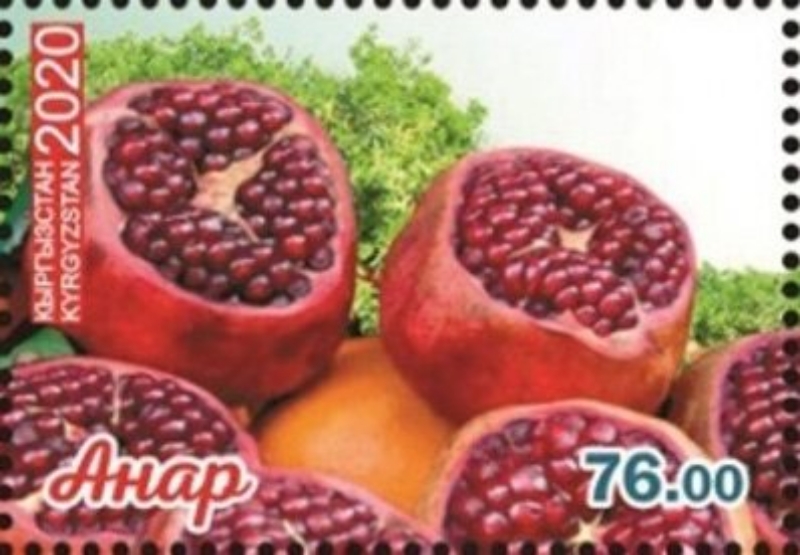 Pomegranate juice can be sweet or sour, but most fruits are moderate in taste, with sour notes from the acidic ellagitannins contained in the juice. Pomegranate juice has long been a popular drink in Europe and the Middle East, and is now widely distributed in the United States and Canada.

Grenadine syrup long ago consisted of thickened and sweetened pomegranate juice, now is usually a sales name for a syrup based on various berries, citric acid, and food coloring, mainly used in cocktail mixing. In Europe, Bols still manufactures grenadine syrup with pomegranate. Before tomatoes (a New World fruit) arrived in the Middle East, pomegranate juice, molasses, and vinegar were widely used in many Iranian foods, and are still found in traditional recipes such as fesenjān, a thick sauce made from pomegranate juice and ground walnuts, usually spooned over duck or other poultry and rice, and in ash-e anar (pomegranate soup).

Pomegranate seeds are used as a spice known as anar dana (from Persian: anar + dana‎, pomegranate + seed), most notably in Indian and Pakistani cuisine. Dried whole seeds can often be obtained in ethnic Indian markets. These seeds are separated from the flesh, dried for 10–15 days, and used as an acidic agent for chutney and curry preparation. Ground anardana is also used, which results in a deeper flavoring in dishes and prevents the seeds from getting stuck in teeth. Seeds of the wild pomegranate variety known as daru from the Himalayas are regarded as high quality sources for this spice. 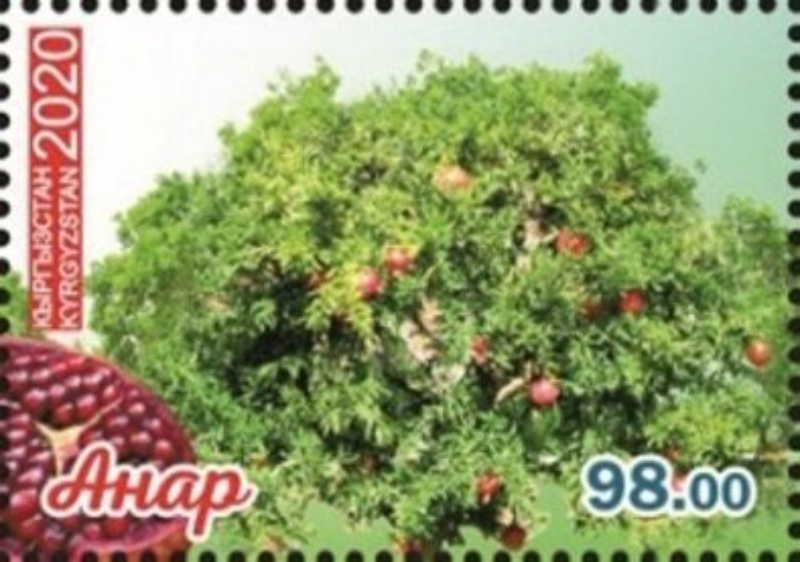 Dried pomegranate seeds, found in some natural specialty food markets, still contain some residual water, maintaining a natural sweet and tart flavor. Dried seeds can be used in several culinary applications, such as trail mix, granola bars, or as a topping for salad, yogurt, or ice cream.

In the Caucasus, pomegranate is used mainly for juice. In Azerbaijan, a sauce from pomegranate juice narsharab, (from Persian: (a)nar + sharab‎, literally “pomegranate wine”) is usually served with fish or tika kabab.

In Turkey, pomegranate sauce (Turkish: nar ekşisi) is used as a salad dressing, to marinate meat, or simply to drink straight. Pomegranate seeds are also used in salads and sometimes as garnish for desserts such as güllaç. Pomegranate syrup or molasses is used in muhammara, a roasted red pepper, walnut, and garlic spread popular in Syria and Turkey.

In Greece, pomegranate is used in many recipes, including kollivozoumi, a creamy broth made from boiled wheat, pomegranates, and raisins, legume salad with wheat and pomegranate, traditional Middle Eastern lamb kebabs with pomegranate glaze, pomegranate eggplant relish, and avocado-pomegranate dip. Pomegranate is also made into a liqueur, and as a popular fruit confectionery used as ice cream topping, mixed with yogurt, or spread as jam on toast.

In Mexico, they are commonly used to adorn the traditional dish chiles en nogada, representing the red of the Mexican flag in the dish which evokes the green (poblano pepper), white (nogada sauce) and red (pomegranate seeds) tricolor.