Chokri Belaïd (شكري بلعيد‎), also transliterated as Shokri Belaïd, was a Tunisian lawyer and politician who was an opposition leader with the left-secular Democratic Patriots’ Movement. Belaïd was a vocal critic of the Ben Ali regime prior to the 2011 Tunisian revolution and of the then Islamist-led Tunisian government. On 6 February 2013, he was fatally shot outside his house in El Menzah, close to the Tunisian capital, Tunis. As a result of his assassination, Tunisian Prime Minister Hamadi Jebali announced his plan to dissolve the existing national government and to form a temporary “national unity” government.

Belaïd was born in the town of Djebel Jelloud in Tunisia on 26 November 1964. He was a student activist in the 1980s. He worked as a lawyer and was also part of the defence team of former Iraqi president Saddam Hussein during his trial for crimes against humanity. He spoke out against a 2008 clampdown on miners, and was a noted political critic of Zine El Abidine Ben Ali, the strongman Tunisian leader in office for 23 years, whose 2011 self-exile to Saudi Arabia was the first tangible result of the Arab Spring uprisings. Belaid was also a poet, and one of his poems is dedicated to Lebanese intellectual Husayn Muruwwa, who was assassinated by Islamists in the late 1980s.

Belaid was married and had two daughters. The family lived in a rented apartment.

Belaïd was the coordinator of the far-left Democratic Patriots’ Movement, which was part of a 12-member umbrella organisation called the Popular Front. He identified with pan-Arabism and was active opponent of normalizing relations with Israel. and was a strong critic of the supporters of fundamentalist Islam, sometimes referred to as Salafists, whose confrontational tactics since the change of government in 2011 have prevented some plays and music concerts from being held in Tunisian cities. The Salafists also have been blamed for attacking the US Embassy in Tunisia in 2012.

Belaid was succeeded by Ziad Lakhdhar as secretary general of the party.

On 6 February 2013, as Belaïd was leaving his house in the neighborhood of El Menzah 6, Tunis, he was shot by Kamel Gaghgadhi, who later fled with an accomplice on a motorbike, four times in the head and chest. He was rushed into the Ennasr clinic, and died there. According to Tunis Afrique Presse, Belaïd died in hospital. Belaid had reportedly received multiple death threats in the days prior to his death. The night before he was killed, Belaid said; “All those who oppose Ennahda become the targets of violence.” Earlier that week, Belaïd said that the committees established out of the revolution were a “tool” used by the Islamists.

Following news of his death, police used tear gas to disperse thousands of people demonstrating in front of the Interior ministry in Tunis. Other protests spontaneously occurred in cities throughout the country, including Mezzouna, Gafsa and Sidi Bouzid, where tear gas was also used to disperse protesters. The interim President of Tunisia Moncef Marzouki cut short an overseas trip to Cairo as a result of the protests and assassination.

On 26 February, four radical Islamists were detained due to their alleged connections to the assassination of Belaid. The suspect in the murder was identified as Boubacar Hakim, a hardline Salafist.

On 2 October, Chokri Belaid defence committee spokesman Tayeb Oqaili claimed that, according to official documents, Abdulhakim Belhadj was involved in the killings of both Chokri Belaid and Mohamed Brahmi, pointing to links between the Libyan Islamic Fighting Group, Ansar al Sharia and the Ennahda Movement. The left-wing leader maintained that Belhadj apparently intended to carry out terrorist attacks in Tunisia, and trained the Ansar al-Sharia cell that killed the opposition politicians, all under close observation by Ennahda leaders Rashid al-Ghannushi, Hamadi Jebali and Samir Dilou, among others.

Prime Minister Hamadi Jebali called the killing “a political assassination and the assassination of the Tunisian revolution.” In a televised address, Jebali announced the formation of a caretaker government composed of technocrats, which would rule the country until a new election is held. The Islamist political party Ennahda issued a statement calling the attack a “heinous crime” that targeted the “security and stability of Tunisia”. The premises of Ennahda in the central town of Mezzouna and in the north-eastern town of El Kef were torched by demonstrators and the party’s office in Gafsa was ransacked. Four opposition parties, Belaid’s own Popular Front bloc, Nidaa Tounes, the Al Massar party, and the Republican Party, announced that they were pulling out of the national assembly and called for a general strike.

The assassination of Chokri Belaid prompted responses from the Tunisian intellectual community.

Belaid’s funeral service was held in Tunis on 8 February. It was attended by at least a million people amid clashes between police and protesters. His body was buried at Jellaz cemetery. The following day en Nahda called for its supporters to gather in Tunis. 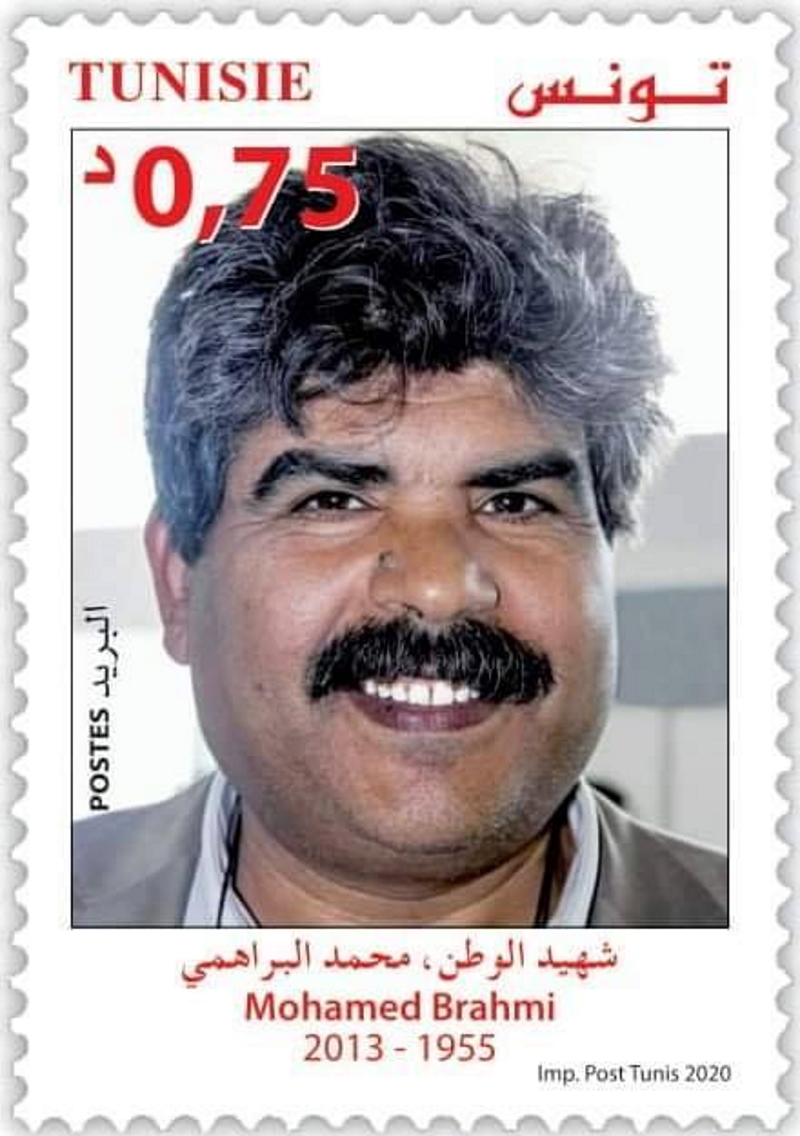 Mohamed Brahmi (محمد براهمي) was a Tunisian politician. Brahmi was the founder and former leader of the People’s Movement, which, under his leadership, won two seats in the constituent election in 2011.

Brahmi was born on 15 May 1955 in Sidi Bouzid, capital of the Sidi Bouzid Governorate. He graduated from his Alma Mater, the Higher Institute of Management at Tunis University with a Master’s Degree in accounting in 1982. After his graduation, he taught as a professor of economics and management for two years at the Technical College of Menzel Bourguiba.

Later, he worked in the Office of Irrigation, and then in real estate from 1985 to 1993. He did consultancy work as an auditor for the Technical Cooperation Agency in Saudi Arabia. From 2004, he worked as the manager of a real estate business specializing in residential properties.

Brahmi was an active member of the Arab Progressive Unionist Students until 2005, at which point he left and founded the Nasserist Unionist Movement, an illegal party under the Ben Ali government. After the Tunisian revolution, he founded the People’s Movement and became the general secretary of the group. The party later joined the Popular Front on 13 April 2013. However, Brahmi and other members of the movement left the front on 7 July due to criticisms of the movements’ central and regional leaders over cooperation with the front.

Brahmi was known for his socialist and Arab nationalist beliefs, particularly in the tradition of Gamal Abdel Nasser. He was a practicing Muslim. Although a member of the anti-Islamist Popular Front, he did not have a reputation for being especially critical of Islamists, and in fact had many friends in the ruling Islamist Ennahda Movement.

On 25 July 2013, Brahmi was fatally shot in Tunis outside his Ariana home in front of his wife and children by two men on a motorcycle. He received 11 bullets and died later that day in a hospital in Ariana district of Tunis.

Brahmi’s death followed the assassination of opposition leader Chokri Belaid, killed on 6 February 2013. The two were members of the same left-wing coalition. Interior Minister Lotfi Ben Jeddou told a news conference: “The same 9mm automatic weapon that killed Belaid also killed Brahmi.” The suspect in both murders was identified as Abu Muqatil al-Tunisi, a Salafist being sought on suspicion of smuggling weapons from Libya.

A state funeral was held for Brahmi and tens of thousands of people attended the procession to the Jellaz Cemetery in Tunis. During Brahmi’s funeral, protesters called for the government to be toppled, while police fired tear gas on them.

Following his death, hundreds of his supporters, including relatives and party members of the People’s Movement, demonstrated in front of the Interior Ministry’s building on Avenue Habib Bourguiba and blamed the incumbent Ennahda Party and their followers for the assassination. Hundreds of supporters also protested in Brahmi’s hometown of Sidi Bouzid.

After the protests, Education Minister Salem Labiadh submitted his resignation. The opposition minority in the national assembly called for the government to resign and dissolve the legislature, but Prime Minister Ali Larayedh said that the government would continue its work and set 17 December as the date for the scheduled general election (later postponed for the end of 2014). In January 2014, however, Ennahda replaced Larayedh with a technocrat.

On 19 September 2013, Tunisia’s interior minister told lawmakers the CIA informed authorities Brahmi was a target and said there had been a “failure” in the security services’ response. He announced an investigation had been opened.

In the 2014 election, his wife Mbarka Aouinia Brahmi, heading the Popular Front’s list in the Sidi Bouzid constituency, was elected a member of the Assembly of the Representatives of the People. On 4 December 2014, she was nominated for the post of the First deputy Speaker of the Assembly by the Popular Front, but was defeated with 33 votes against 157 votes for her contender Abdelfattah Mourou of Ennahda. Apart from the Popular Front (15 seats), only Afek Tounes (8 seats) had declared their support for her. She later criticized the pact of Nidaa Tounes with Ennahda, “the two parties of the political right, the one liberal and the other religious,” as she put it.