I believe the first reports I heard about the coronavirus now commonly known as COVID-19 was sometime in early January by way of a stamp trader in Suzhou, China.  He indicated a possible delay in sending a few philatelic items to me due to having to enter quarantine.  Not long after, the press here in Phuket, Thailand, began predicting lower numbers of Chinese tourists for the upcoming Lunar New Year celebrations. Phuket has a huge number of citizens with Chinese ancestry and our largest festivals each year are rooted in Sino Buddist culture.

By mid-February, COVID-19 was widespread in South East Asia as the pandemic took hold. I was already familiar with its cousin, SARS, having been caught in Beijing, China at the height of that crisis and spent much of the last period of the disease in Shanghai and Hong Kong (including “ground zero”, the Metropole Hotel in Kowloon).  This coronavirus became a worldwide threat not long after and the death toll took on frightening levels in places such as Iran and Italy.

The first philatelic rumblings related to COVID-19 began early in March with the online appearance of a pair of stamps, said to be slated for release sometime in April.  It soon transpired that these were simply preliminary designs and unpopular ones at that.  Eventually, a second design appeared in forums and social media groups and an official release was announced by China Post in late March. Just a few days before its scheduled 7 April issue, the stamp designs were deemed unsuitable and recalled.  I have written two articles about the announced design and its subsequent postponement here on Philatelic Pursuits and you can read them by following the links. The new design has now been announced with some subtle differences from the original and will be issued on 11 May.

On 17 March, the Islamic Republic of Iran issued a single stamp in its National Heroes series, entitled “Frontline Fighters of the Coronavirus.”  This was the first stamp to be released in what is shaping up to be a popular topical subject.

Vietnam released a pair of stamps under the title “Prevention and Control of the Coronavirus Covid-19” on 31 March in a variety of formats (perforated and imperforate stamps, sample overprints and maximum cards) but all were printed in very limited quantities.

In Europe, Switzerland announced and issued a semi-postal on 6 April, only available online and in full sheets with the surcharge going to people who urgently need help now. The money will be split between Swiss Solidarity and the Swiss Red Cross.

On 23 April, it was reported that Correios Brazil will release a set of five stamps in June but no design images have yet been publicized.  On 25 April, the website for the Isle of Man Post Office added a graphic and a dead link mentioning an eight-stamp set “celebrating frontline workers” under the hashtag #CarryUsThrough. Two days later, they began pre-sales for eight gummed stamps and eight self-adhesive ATM labels that were released on 4 May.

The Guernsey Post Office has announced COVID-19 stamps will be issued for the Bailiwick as well as the island of Alderney later in the year.  They have created a contest for children to design the stamps. The deadline for entries was 15 May.

There are also several semi-official releases that have surfaced.  One of these is a personalized miniature sheet created through Liechtenstein’s dieMarke.li service.  Called  a Briefmarkenblock, the stamps are valid for postal use but it is not an official Liechtenstein Post release. It was first seen in online stamp groups in mid-March.

Similar is a personalized sheet from Indonesia.  This one was created in a limited edition of just 1,000 copies which will be donated to COVID-19 charities and had a first day of sale date coinciding with World Health Day on 7 April.  The sheet contains two stamp designs.

A second pair of COVID-19 stamp images appeared online on 12 April, claimed to be “commemorative” stamps but there is no mention of these on POS Indonesia’s website or on the postal administration’s social media accounts.  Official confirmation was received by myself on 14 April and another individual on 15 April, although details are still sketchy as per a release date, sheet format, etc. The associated article will be updated as more information is forthcoming. As of 7 May, there has been no further news on this.

Several local stamp clubs in Spain are beginning to produce their own personalized stamps on the COVID-19 theme.  Appearing online in mid-April have been designs by the Cadiz Philatelic Society and the Calahorra (Rioja). Philatelic Society using the Tusello service of Correos, the Spanish postal service. According to their website,

“The TUSELLO service makes it possible to buy sheets of 25 stamps online, from the Correos Virtual Office.

This service means that you can transform images into real Correos postage stamps. You can also order personalised stamps with a QR image, generated from your MP4 video file.

Send in the design online.

The stamps are self-adhesive and presented in sheets of 25 stamps, produced by the National Mint.

The stamps are valid in Spain and abroad (taking into account postal charges in the country of destination).

There are up to four types of postal charges (A, A2, B and C) according to the destination.

A few fakes have surfaced as well. A design claimed to be from Sri Lanka circulated online in mid-March but emails to the postal administration revealed that there are currently no plans to issue a coronavirus-themed stamp. 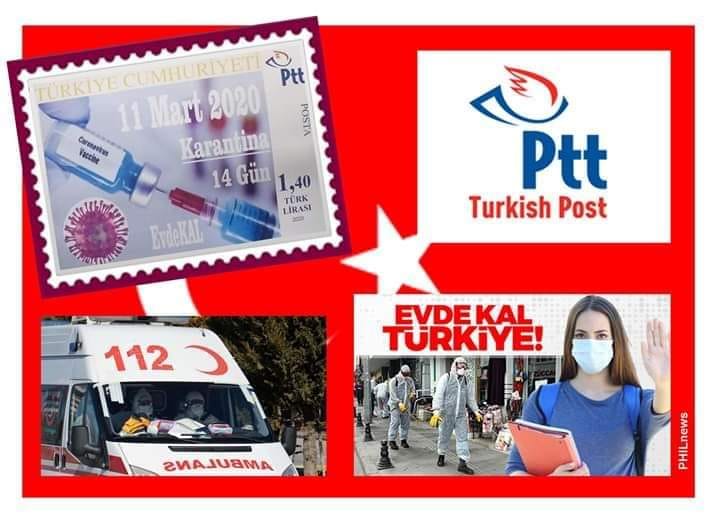 Similarly, there have been images shared online of stamps supposedly from Turkey and Lebanon that have not yet been confirmed to be official releases.  The Turkish design may be from another personalized sheet.  The website of Liban Post is currently secured behind firewalls due to cyber-attacks and a stamp release cannot yet be confirmed.

The next confirmed release was due on 10 April by  BH Pošta, one of three postal administrations that release stamps for Bosnia Herzergovina but it is not yet known whether the stamp was released on that date or not.  A perusal of their website today (12 April) revealed no mention at all of the stamp.

What else is out there? 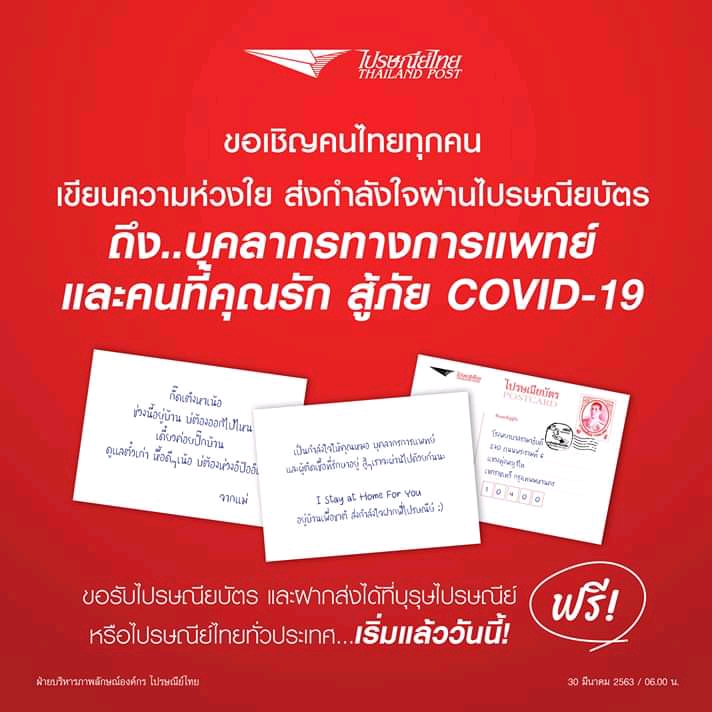 There are already a few forms of postal stationery available including a nice set of post cards from China which can be obtained with special coronavirus meter stamps.  Thailand Post was offering free pre-stamped postal cards prior to widespread provincial lockdowns; a few of these cards have surfaced bearing various rubber stamp markings applied by local post offices and collectors.

Postal markings in the form of official postmarks, unofficial handstamps, delayed and disinfected/fumigated chops and others have become a steady stream shared around social media.

Perhaps the best known of these are ink jet markings from Royal Mail in Great Britain offering support for members of its National Health Service (NHS).  These began to be applied to mail in late March and have been seen from at least three different major sorting centers.

A special pictorial cancellation had been scheduled by Croat Post to be used on 25 March in Zagreb.  However, a powerful earthquake struck on 22 March, destroying much including the Central Post Office.

Singapore Post is applying pictorial cancellations to mail with three different COVID-19 designs scheduled to be used between 7 April and 17 May.

POS Malaysia is also applying a COVID-19 slogan cancellation to its processed mail.

Vietnam has applied a pictorial postmark in red ink on some covers bearing February’s Love stamp as well as its COVID-19 release.  This is not a first day of issue marking.

A number of “Delayed in Transit” markings are surfacing as well.  The major distributors for North Korean stamp issues are in China and mail cannot be currently sent between the two countries.  First day covers for those stamps released during this crisis are having special hand-stamps applied explaining the delay.

Germany is beginning to return international mail to the sender as Deutsche Post has suspended operations. The sticker pictured above is being applied to mail sent to Germany and reads:

“Postal traffic to this country is interrupted.  Returning to normal is not predictable.  Return to sender.”

A “fumigated mail” marking has been seen on envelopes returned from Italy as well as a few “sanitized” markings from China.

It may be quite some time before the vast majority of Chinese markings are known outside of Southeast Asia.  Predominately pictorial, they often announce measures taken in the fight against the virus such as the initiation of the health-check mobile phone application.

On 21 April, the Karela Postal Circle in India began selling a commemorative cover with pictorial cancellation.

Another addition to a coronavirus collection could be the direct-mail postcard sent to every household in the United States under the name of President Donald Trump in late March and early April.

This is, of course, a developing topic(al).  There will be many more stamps to come issued using the Coronavirus COVID-19 theme as well as additional interesting postal markings and other ancillary items to seek out.

Many of us collectors are currently unable to go to work and sit sequestered in our homes with plenty of time to devote to our hobby.  Where I live in Phuket, Thailand, we are basically cut off from the outside world other than the Internet and television.  I cannot wait to see what treasures the postal carrier brings me once mail service begins anew.

Please, if you come across any additional Coronavirus-related postal history or philatelic creations, share them in the comments below.

All images of official releases are credited to the applicable postal administrations as linked in the original articles mentioned above; others used with explicit permission from collectors including Xu Wei, Mohammed Aziz, Achour Philnews, Thai Stamp Museum, Tem Choi Viêt Nam and Wiparat Charoensuk, and implied permission via Twitter and Facebook postings in public forms.  All are shared under the Creative Commons license.