One Giant Leap — Exploring the Moon and Space 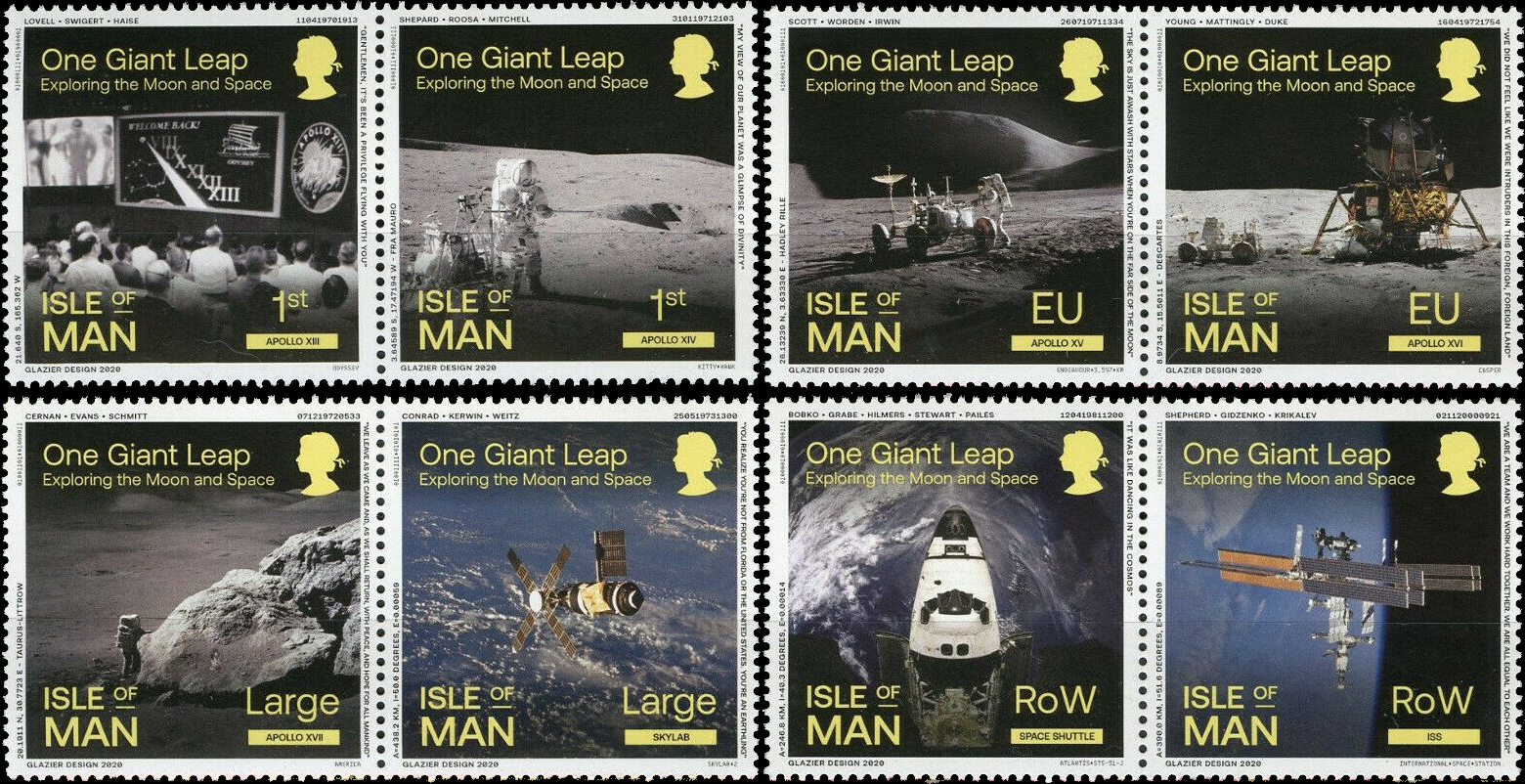 The Isle of Man Post Office is pleased to present a set of eight stamps titled “One Giant Leap, Exploring the Moon and Space.” The issue continues the story of NASA human spaceflight, which commenced with “One Small Step” issued in April 2019.

It has been our great honour and privilege to work with George Abbey and NASA to create this second set of stamps marking over 50 Years of Lunar Exploration and mankind’s further exploration of space, symbolically themed around that ‘One Small Step’ Neil Armstrong took on the surface of the Moon in 1969 and the ‘Giant Leap’ forward for humanity. We have studied the Moon for millennia; it governs our tides, our planting seasons, even the rhythm of our bodies, it is an ever-changing constant in our lives, but it is that ‘one small step, but giant leap’ that marked the beginning of human exploration beyond the confines of our planet. Our continued fascination with space has led to satellites and space stations, rockets and now visionary plans for a return to the Moon. 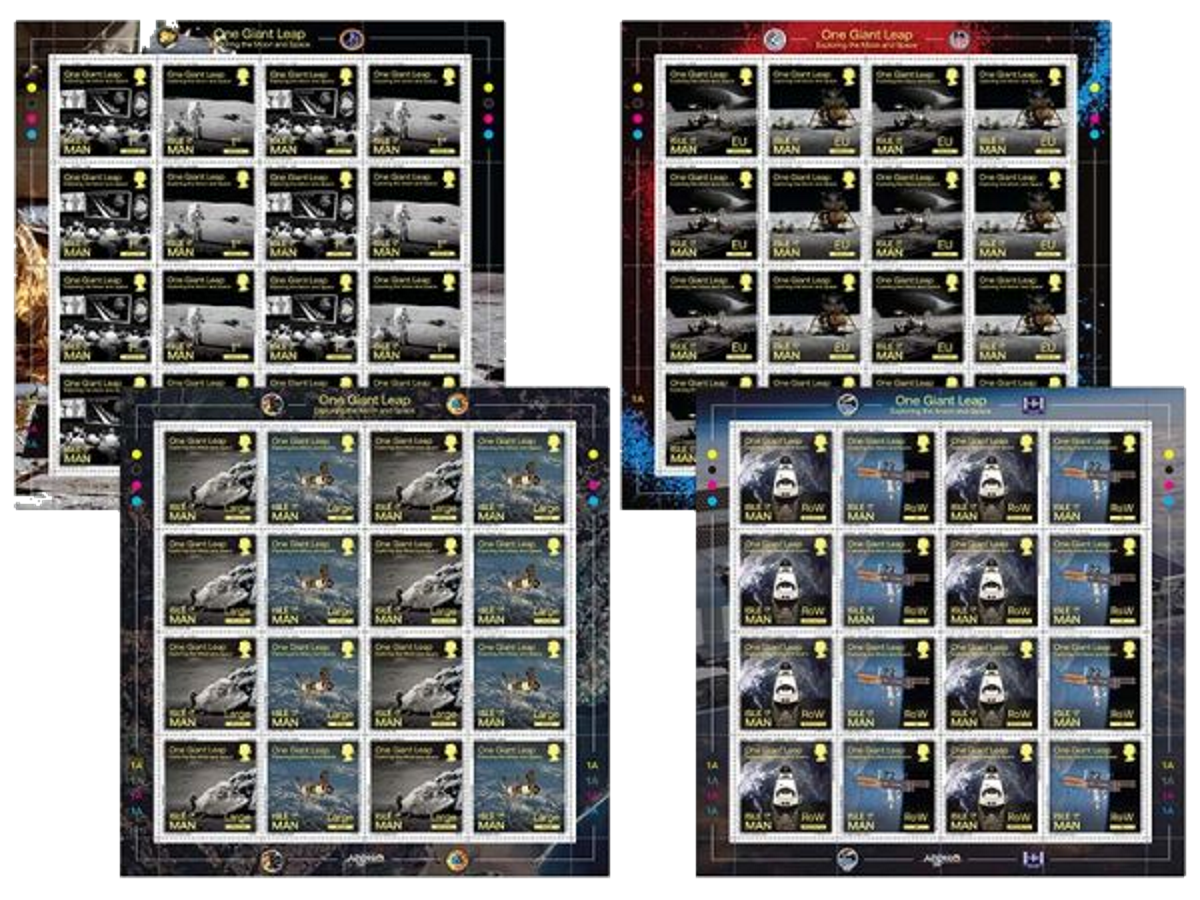 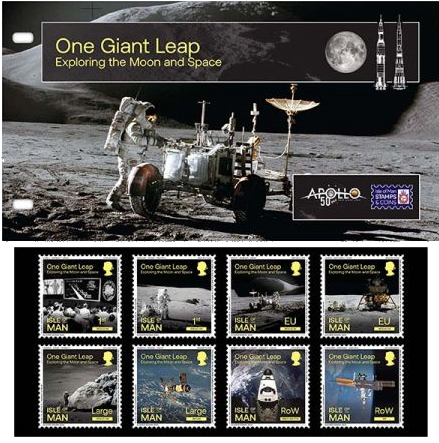 Our stamps feature the Apollo XIII-XVII Missions, Skylab, the Space Shuttle and The International Space Station (ISS), and cover the development of human space flight from the pioneer flights to the Moon, through cooperation with Russia in the later Apollo and Skylab era, to the Space Shuttle, through to the modern era of the permanently occupied ISS. The story is one of ongoing cooperation and endeavour; without that great spirit that exists between the various worldwide space agencies there would not be a current or future international mission. The cover of our issue is graced by Nicole Stott, who served as a flight engineer on the ISS exhibitions. 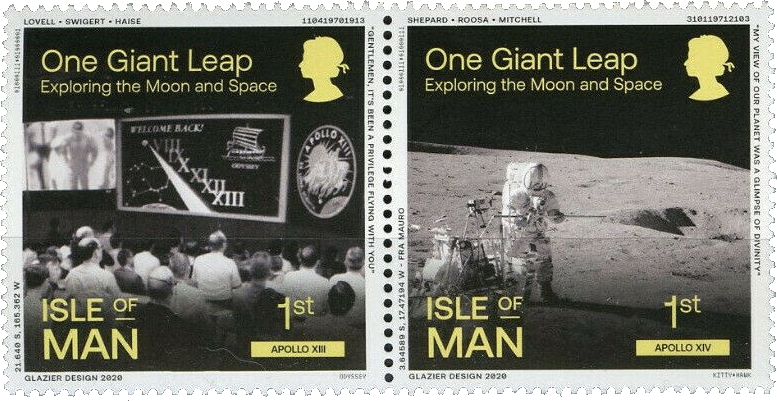 Our first stamp features the Apollo XIII mission control room during post-recovery ceremonies. Flight Director Gene Kranz stated: “Failure is not an option” and this has become the mantra for NASA’s approach to safe exploration. To the left of the image are the GPS coordinates of the splashdown site for the mission. Upper right we have the launch date of the mission. The Apollo XIII crew is listed and the quote is from Commander Jim Lovell: “GENTLEMEN, IT’S BEEN A PRIVILEGE FLYING WITH YOU”.

Our second stamp features Apollo XIV Commander Alan B. Shepard Jr. standing beside the rickshaw-type equipment carrier unique to this mission. Included upper right is the date and time that the mission launched from Earth. To the bottom left of the image are the GPS coordinates and the name Fra Mauro, the landing point on the Moon. The Apollo XIV crew is listed and the quote is from Lunar Module pilot, Edgar Mitchell: “MY VIEW OF OUR PLANET WAS A GLIMPSE OF DIVINITY”. 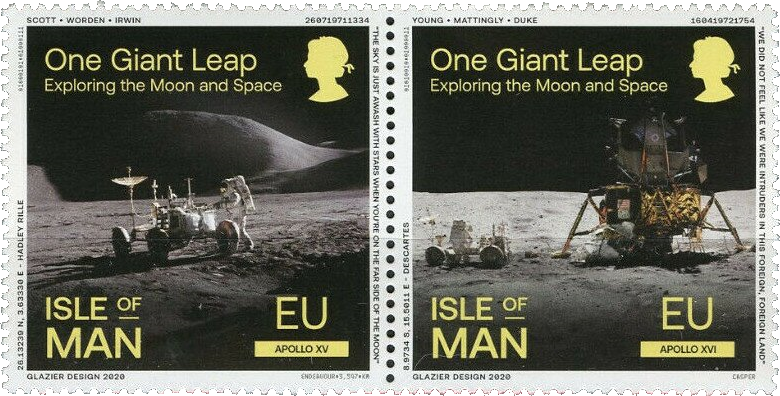 Our third stamp features the Lunar Module pilot James B. Irwin near the Lunar Roving Vehicle during the first Apollo XV lunar surface extravehicular activity. Included upper right is the date and time that the mission left the Earth. To the left of the image are the GPS coordinates, and the name Hadley Rille of the landing point on the Moon. The crew is listed and the quote is from Apollo XV Command Module pilot Alan Worden: “THE SKY IS JUST AWASH WITH STARS WHEN YOU’RE ON THE FAR SIDE OF THE MOON”.

Our fourth stamp features Apollo XVI Lunar Module pilot Charles M. Duke Jr. on the lunar surface. Included upper right is the date and time that the mission left the Earth. To the left of the image are the GPS coordinates and the name Descartes, the Apollo XVI landing point on the Moon. The crew is listed and the quote is from Charles Duke: “WE DID NOT FEEL LIKE WE WERE INTRUDERS IN THIS FOREIGN, FOREIGN LAND”. 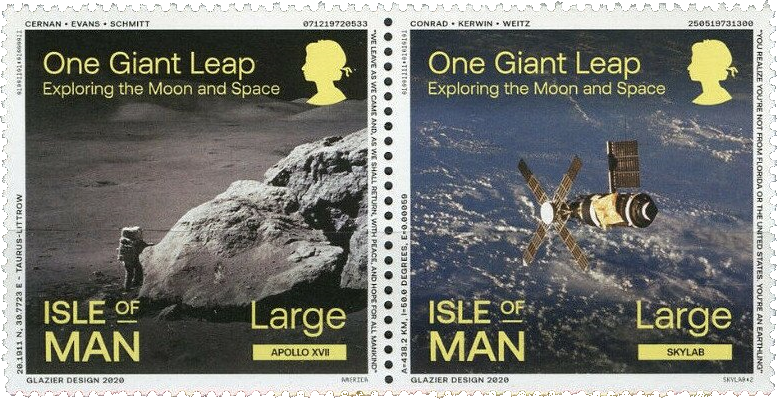 Our fifth stamp features the Lunar Module pilot Jack Schmitt next to a large boulder during the Apollo XVII mission, the final Apollo mission to the Moon. Included upper right is the date and time that the mission left the Earth. To the left of the image are the GPS coordinates and Taurus-Littrow, the landing point on the Moon. The Apollo XVII crew is listed and the quote is from Commander Gene Cernan: “WE LEAVE AS WE CAME AND, AS WE SHALL RETURN, WITH PEACE, AND HOPE FOR ALL MANKIND”.

Our sixth stamp features the Skylab Space Station taken from the departing Skylab 2 Command/Service Module during Skylab 2’s final fly-around inspection. To the bottom left of the stamp are the coordinates that show Skylab’s initial insertion orbit. Included upper right is the time and date of the launch of the first crewed mission to Skylab. The Skylab 2 crew is listed and the quote is from former NASA astronaut Nicole Stott: “YOU REALIZE YOU’RE NOT FROM FLORIDA OR THE UNITED STATES. YOU’RE AN EARTHLING”. Nicole is a long-time friend of the Isle of Man Post Office. 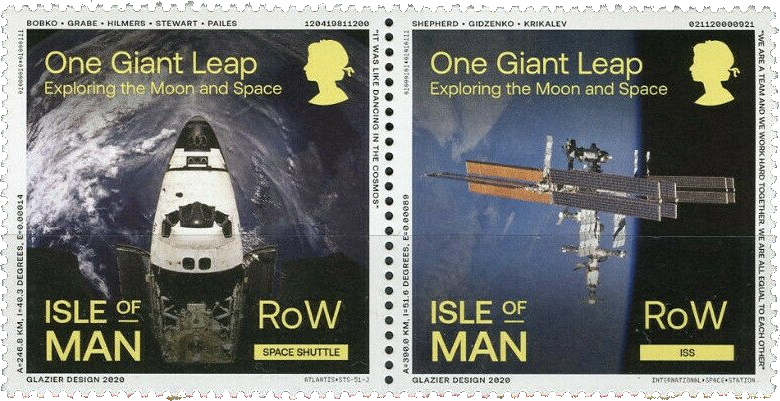 Our seventh stamp features a view of the Space Shuttle Atlantis as seen from the Russian Mir Space Station during the STS-71 mission. Included upper right is the launch date of the first Space Shuttle Columbia’s STS-1. To the left of the image are the coordinates of the initial orbital insertion. The crew of the first flight of Atlantis STS-51J is listed and the quote is from the STS-63 mission Commander Jim Wetherbee: “IT WAS LIKE DANCING IN THE COSMOS” referring to when Discovery approached within 37 feet of the Mir Space Station for the first ever rendezvous.

Our eighth stamp features the International Space Station taken from the Space Shuttle Atlantis as the orbiting complex and the Shuttle performed their relative separation. Included upper right is the date that the first crew arrived at the Space Station. On the left of the stamp are the coordinates of the ISS (the ZARYA module) initial insertion orbit. The crew from this first mission is listed and the quote is from UK astronaut Tim Peake: “WE ARE A TEAM AND WE WORK HARD TOGETHER. WE ARE ALL EQUAL TO EACH OTHER”. Peake visited the ISS in 2015. 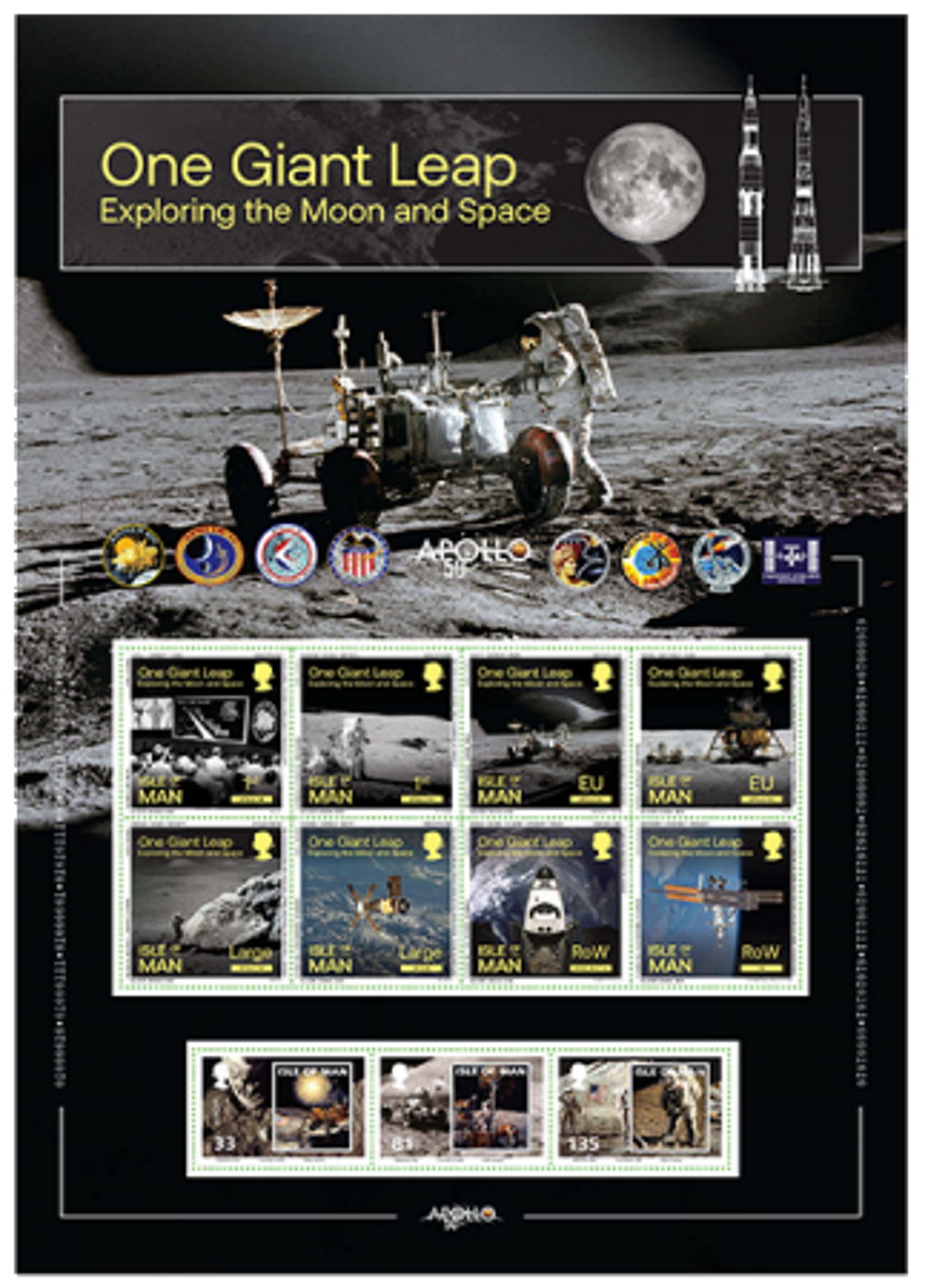 This special sheetlet includes the full eight stamp collection protected within a deluxe folder, featuring the most iconic imagery from the Apollo space missions.
Featured also is three stamps (completing the six from which the first three feature on the One Small Step Sheetlet) featuring artwork by the late Alan Bean, for whom we dedicate this collectable.

Available in Mint or Cancelled to Order, this special sheetlet includes the full eight stamp collection presented alongside astonishing imagery from this remarkable collection and our 2009 stamps which were issued to mark the 40th anniversary of this significant event.

Presented in a complementary wrap which features additional text and imagery, this really is the perfect token to mark this incredible moment in history.

We dedicate this sheetlet to Alan Bean, fourth man to walk on the Moon. 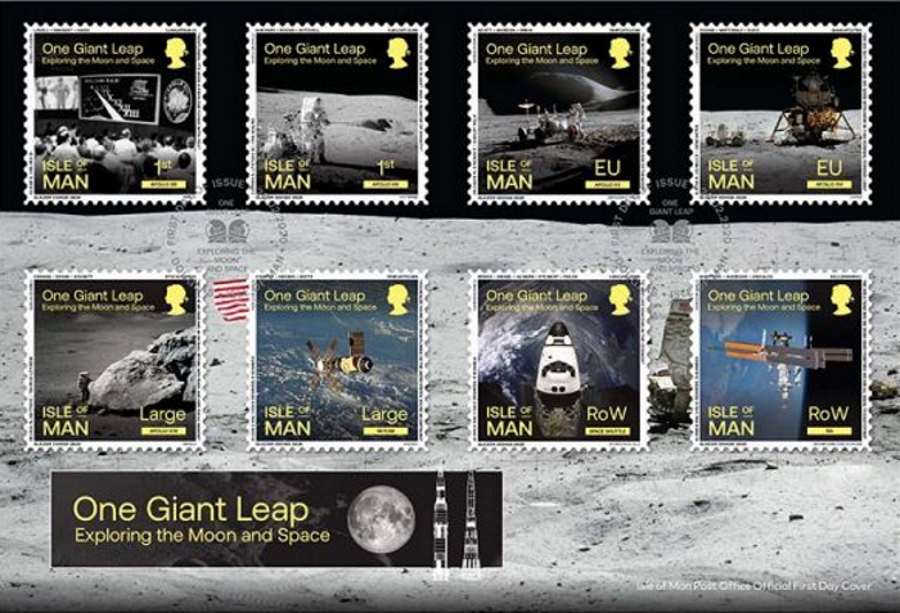 The beauty of space is captured perfectly with this striking first day cover which features all eight stamps, cancelled with a special space themed postmark. The issue text is written by George Abbey who worked with NASA during the Apollo missions and was director of the Johnson Space Center during the NASA Shuttle – Mir Program.

The eight incredible stamps which commemorate one of humankind’s greatest achievements – setting foot on the surface of the Moon are showcased on this inticately detailed envelope.

Featuring a very special postmark, cancelling the stamps for the first day of issue, inside you will also find evocative issue text written by George Abbey. 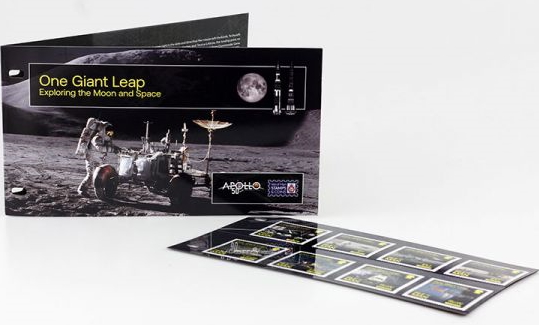 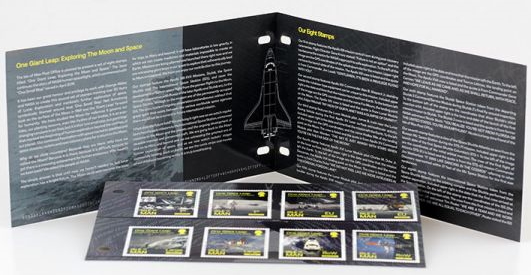 The front cover of this four page, glossy folder displays iconic imagery from the Apollo XV mission, with the Lunar Roving Vehicle – the first lunar surface extravehicular activity taking centre stage. Inside you will gain incredible insight into the missions displayed on all eight stamps, with issue text written by former director of the Johnson Space Center – George Abbey.

All eight intricately detailed, mint condition stamps from this phenomenal collection are perfectly showcased within this four page, glossy folder.

Alongside the stamps, the beauty of space and the astounding technological advancements that have proved pivotal within the lunar programmes of the past 50 years are brilliantly captured through the use of imagery and issue text which has been written by former director of the Johnson Space Center, George Abbey.

Also featured is iconic imagery and detailed insight into the missions displayed on the stamps including;

1st Class Value (2): Astronaut Alan B. Shepard Jr. holding a portable workbench during the mission’s second extravehicular activity on the surface of the Moon.

Large Letter Value (1): Scientist-astronaut Harrison H. Schmitt (the only geologist to have ever visited the Moon), is photographed standing next to a lunar boulder at the Taurus-Littrow landing site.

Rest of World Value (1): Fish-eye view of the Space Shuttle Atlantis as seen from the Russian Mir space station during the STS-71 mission.

Rest of World (2): An image of the International Space Station photographed from the space shuttle Atlantis as the orbiting complex and the shuttle performed their relative separation in the early hours of 19th July 2011. 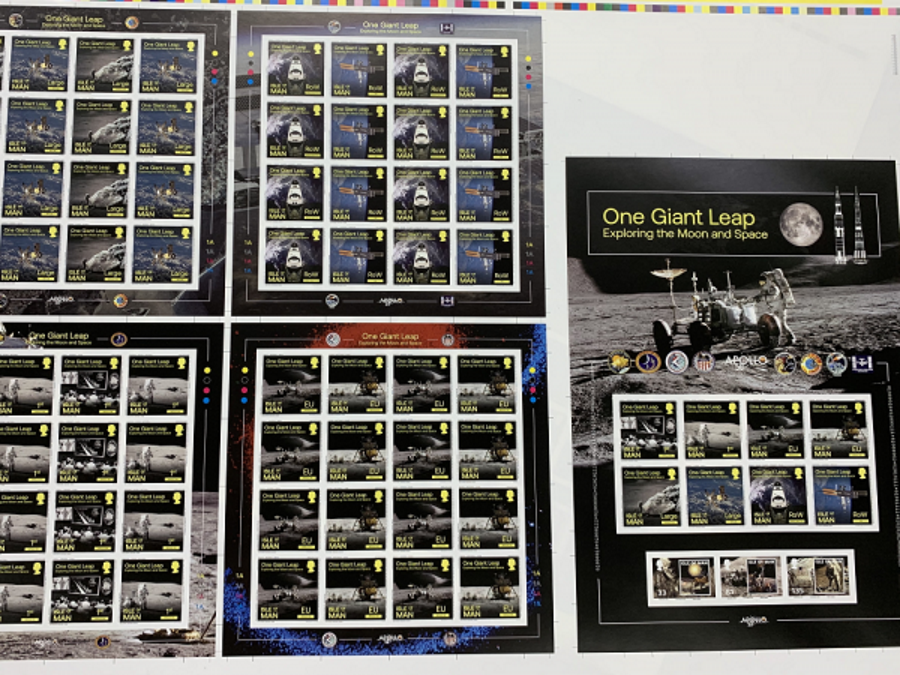 For the true collector of stamps we are delighted to present this very special, limited edition of only 35 uncut self adhesive printer’s sheet. This pane is individually numbered as a limited edition and comes complete with a Certificate of Authenticity.

For the true collector of stamps we are delighted to present this very special, limited edition uncut self adhesive printer’s sheet. This pane is individually numbered as a limited edition and comes complete with a Certificate of Authenticity.

The sheet is exactly what rolls off the printer’s press and foiling machines, with the colour bars and grip left in place. Unsurprisingly, these sheets are rarely released to the public.

Featured is a sheet of each of the four stamp values along with a commemorative sheetlet. There is strictly only 35 available. 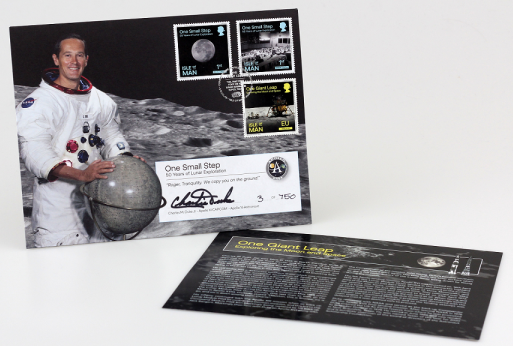 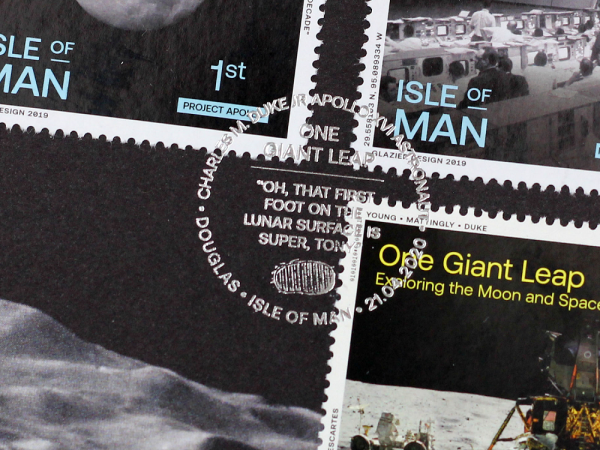 Exclusive to Isle of Man Post Office we are honoured to present this very special, limited edition of only 750, signed cover by astronaut and Moonwalker Charles.M.Duke.

* If you are ordering this product using a special promotion code please call +44 1624 698430 or email stamps@iompost.com as any discount cannot be applied online.

Charles M. Duke acted as Capsule Communicator (CAPCOM) for Apollo 11 and was lunar module pilot for Apollo 16, walking on the Moon on 21st April 1972.

We are therefore honoured to present this limited edition, hand signed cover to offer collectors the opportunity to own something extremely precious.

The front cover is graced with two stamps from our ‘One Small Step’ issue (acknowledging Charles Duke’s role as CAPCOM in Apollo 11) and also the Apollo 16 stamp from our ‘One Giant Leap’ issue, featuring Duke on the surface of the Moon. Also featured is a special postmark detailing the date of the astronaut’s Moonwalk – 21st April.

Inside you will find an illustrative card, featuring insightful information about the Apollo missions.

Available to pre-order now and strictly limited to only 750 worldwide. 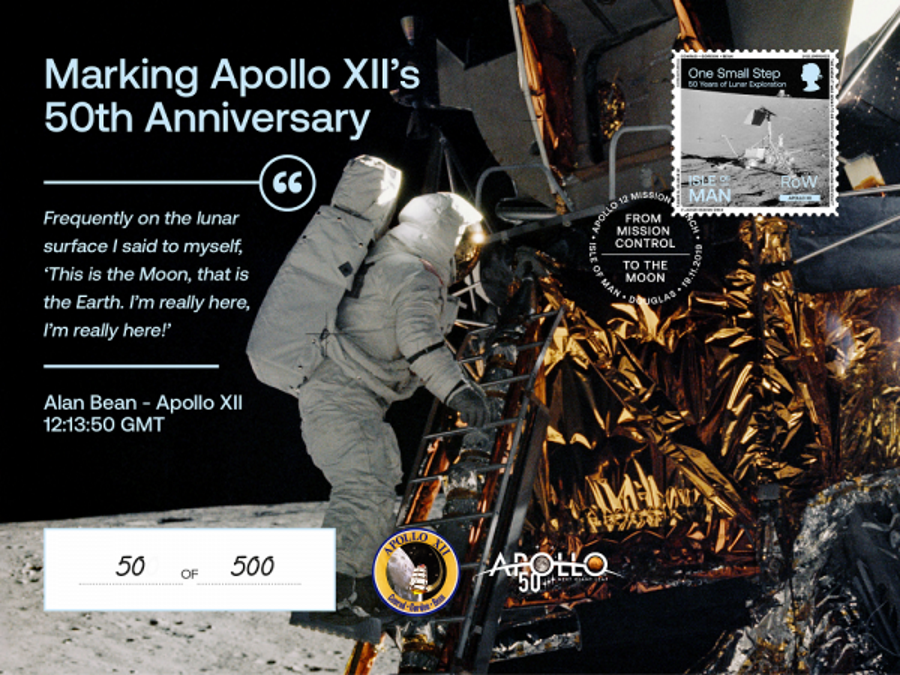 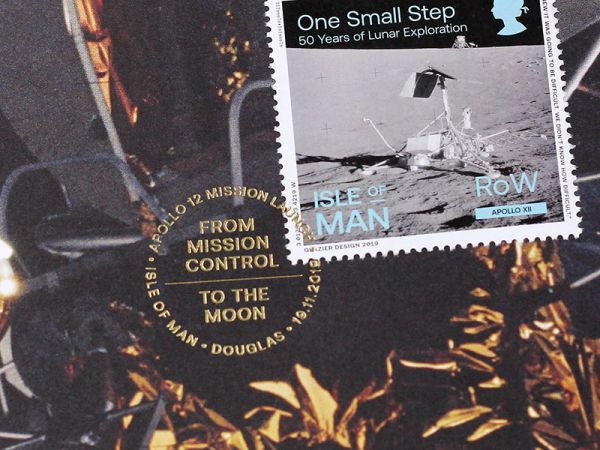 We are proud to introduce this brand new commemorative cover to mark the 50th anniversary of Apollo 12, the second manned mission to land on the Moon. Our cover pays tribute to Alan Bean who was the lunar module pilot on Apollo 12 and the fourth man to walk on the Moon.

The launch took place from the Kennedy Space Center on 14th November 1969 and landed 50 years ago on 19th November 1969.
The cover is complete with a special postmark featuring the date of the Moon landing 19.11.2019.