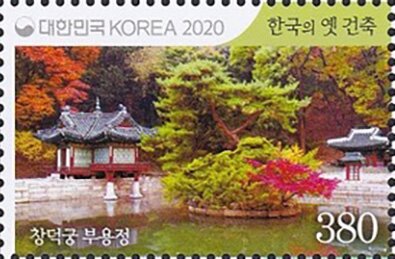 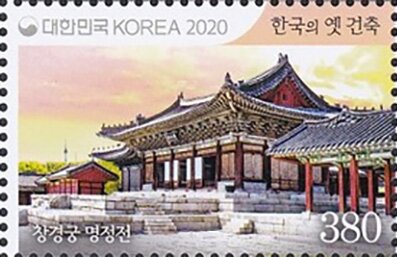 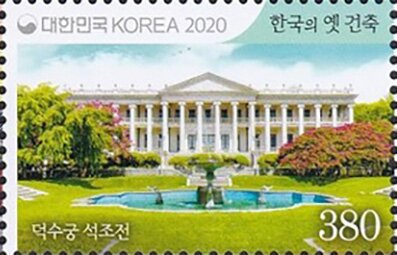 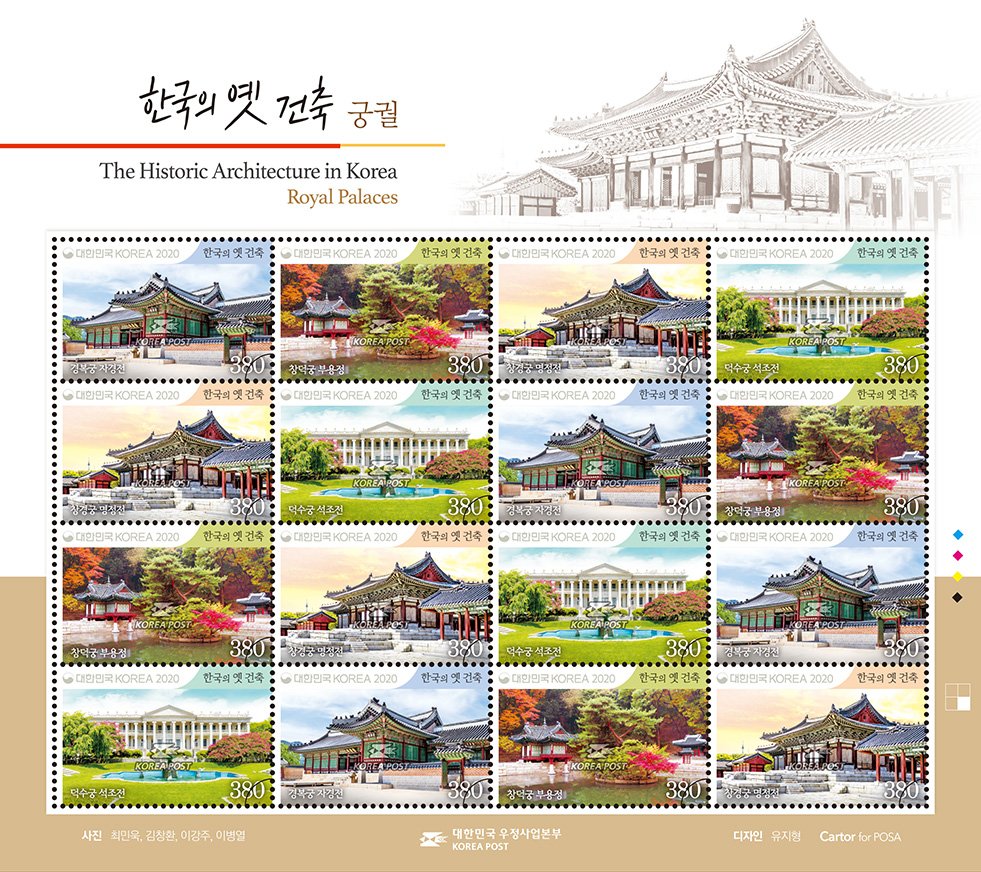 KoreaPost released the stamps in a commemorative (souvenir) stamp sheet of 16 (4×4) stamps of 380 won each, printed by Cartor for POSA.

(News from 우정사업본부 / KoreaPost) On 26 February 2020 KoreaPost issued a series of four stamps showing “Historic Architecture in Korea”, in this particular case (parts of) the royal palaces of Korea. Besides a “regular” set of stamps the stamps were also issued as a set with the same subjects, but with a different printing method including gold foil and embossing.

KoreaPost released the stamps in a souvenir stamp sheet of 4 (2×2) stamps printed by Cartor for POSA. Notice that even though the subjects are identical the values of these four stamps are significantly higher than those of the “regular” stamps in this series. The stamps in this version of the series are also slightly larger than those in the original series. 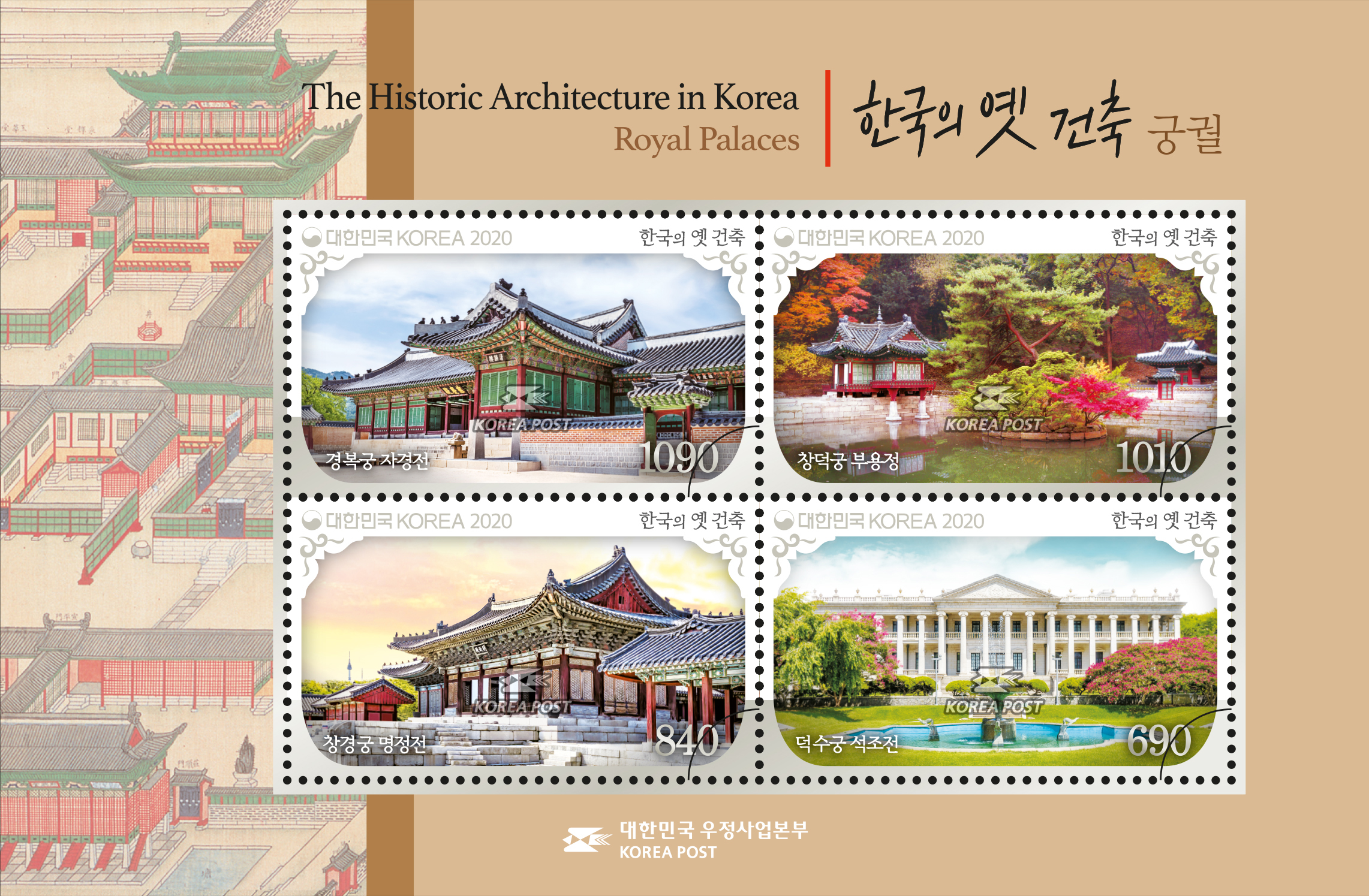 Many people visit the old palaces within Seoul, when they are unable to find time in their busy lives to truly escape the urban tangle of the city, because they can enjoy the simple act of viewing the beauty of the curved roof tiles and colorful dancheong (a type of traditional Korean decorative coloring on wooden buildings). Korea Post is issuing “The Historic Architecture in Korea (Royal Palaces)” as commemorative stamps, featuring four beautiful royal palaces in Korea, to pay homage to Korea’s historic architecture with long, enduring history.

‘Jagyeongjeon Hall of Gyeongbokgung Palace’ is a building that was constructed in 1867 (4th year of King Gojong’s reign) for Queen Sinjeong, King Gojong’s stepmother, on the site of Jamidang, which was used as the king’s bedchamber during the early Joseon period. In 1873 (10th year of King Gojong’s reign), Jagyeongjeon Hall was lost to a fire and reconstructed. Three years later, however, there was another fire, and the building was repaired in 1888 (25th year of King Gojong’s reign). Jagyeongjeon Hall, which was used as a bedchamber for queen dowagers during the late Joseon period, was 44 kan (traditional unit of measurement used in Korean architecture). With the bedroom, or Bogandang, located in the northwest to preserve warmth during the winter, Jagyeongjeon Hall was placed in the center. The attic, Cheongyeonlu, was placed to the southeast to stay cool during summer. Dozens of houses, walls, and doors in its vicinity were lost, mostly during Japanese colonial rule, but Jagyeongjeon Hall went through several repairs and still survives today. It is the only building among the bedchambers in Gyeongbokgung Palace which has been preserved since the reign of King Gojong. According to Gunggwolji , a book about palaces during the late Joseon period, ‘Buyongjeong Pavilion of Changdeokgung Palace’ was built under the name ‘Taegsujae’ in 1707 (33rd year of King Sukjong’s reign) and it was rebuilt and renamed ‘Buyongjeong’ in 1792 (16th year of King Jeongjo’s reign). Here at Buyongjeong Pavilion, King Jeongjo held a east to congratulate those who passed the civil service examination and also enjoyed flowers and poetry with his courtiers. Buyongjeong Pavilion holds great historic and artistic value as a building that exemplifies the culmination of Korean architectural beauty with its breathtaking proportions and the contrasts in its unique ‘+’ shape floor plan, spatial layout, and architectural decorations.

‘Myeongjeongjeon Hall of Changgyeonggung Palace’ was constructed in 1484 (15th year of King Seongjong’s reign), but it was lost to fires during the Japanese invasions of Korea and rebuilt in 1616 (8th year of King Gwanghaegun’s reign). Unlike Geunjeongjeon Hall of Gyeongbokgung Palace or Injeongjeon Hall of Changdeokgung Palace, which are two-story buildings, Myeongjeongjeon Hall is a one-story building with 5 kan in the front and 3 kan on the sides. It was mostly used as a place to have courtiers deliver new year`s greetings to the king, host other big national events, or welcome foreign delegates. It is the oldest wooden building in the Joseon royal palaces and it is recognized as a valuable historical building for architectural history research thanks to the fact that the building preserves the architectural style of the early Joseon period. ‘Seokjojeon Hall of Deoksugung Palace’ is Korea’s first Western-style building, which broke ground in 1900 (4th year of King Gwangmu’s reign) and finished construction in 1910 (3rd year of King Yunghui’s reign) under the Korean Empire (Daehan Empire). Unlike other Joseon royal palaces, the building integrates the functions of the royal bedchambers and the office chamber. As it was used for multiple purposes, including those of the royal bedchamber, its original form has been worn down quite a lot. Restoration efforts began in October 2009, and it was opened as ‘Seokjojeon Daehan Empire History Museum’ in October 2014.

“The Historic Architecture in Korea” features two types of post stamps, a full sheet and a souvenir sheet. The souvenir sheet adheres to international standard fees per region. Go in person to visit the four royal palaces of Korea that are featured on the post stamps, and have a good time interacting with history. 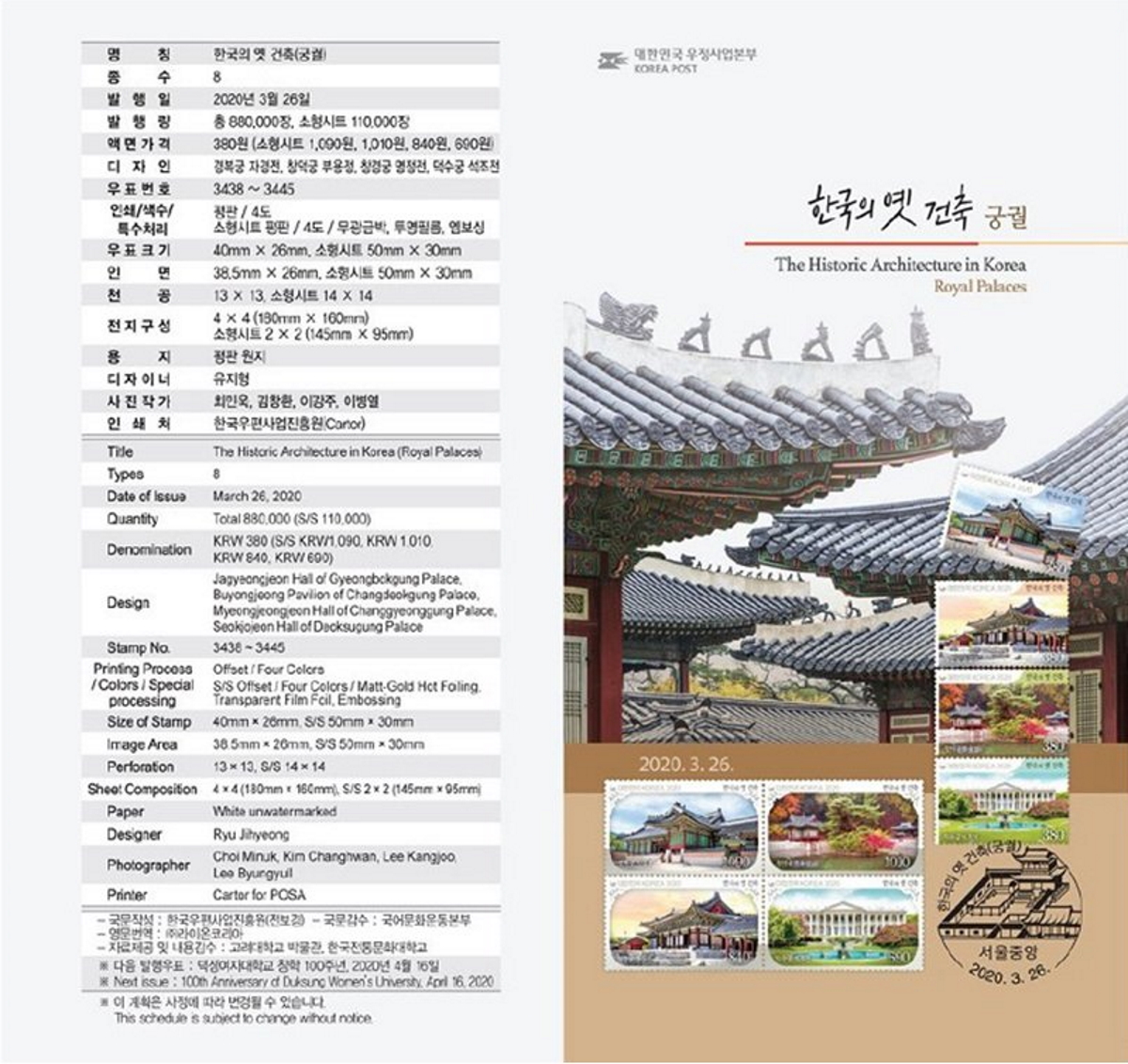 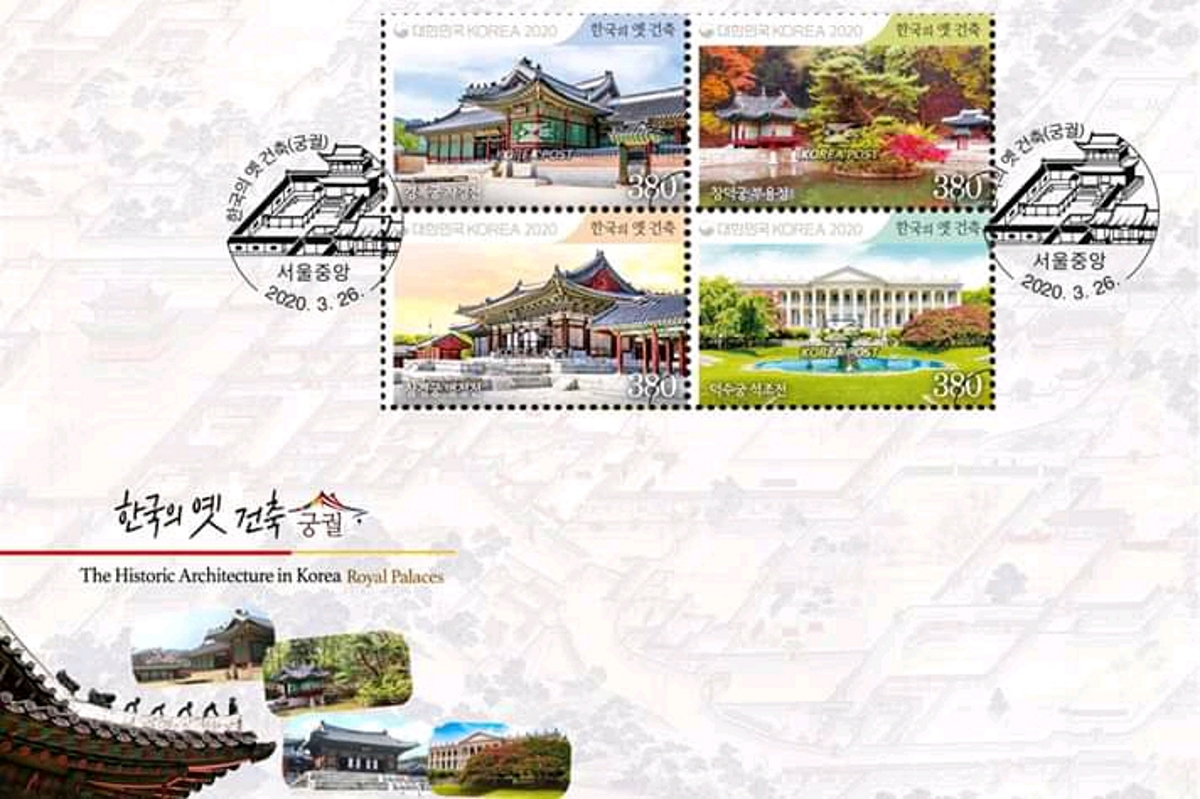 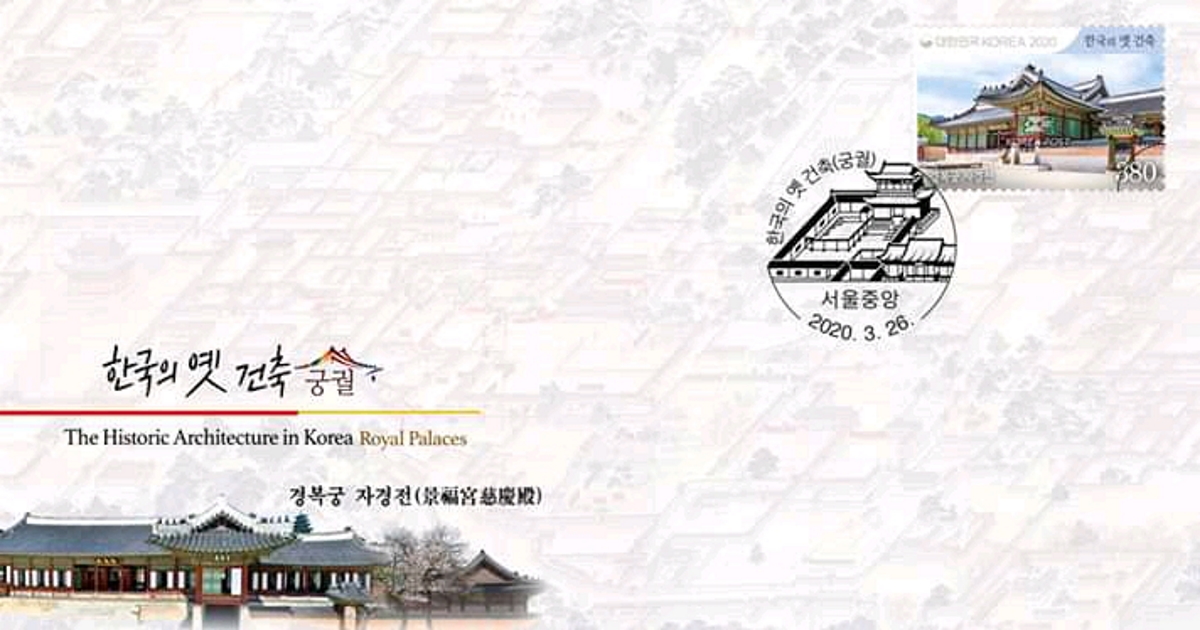 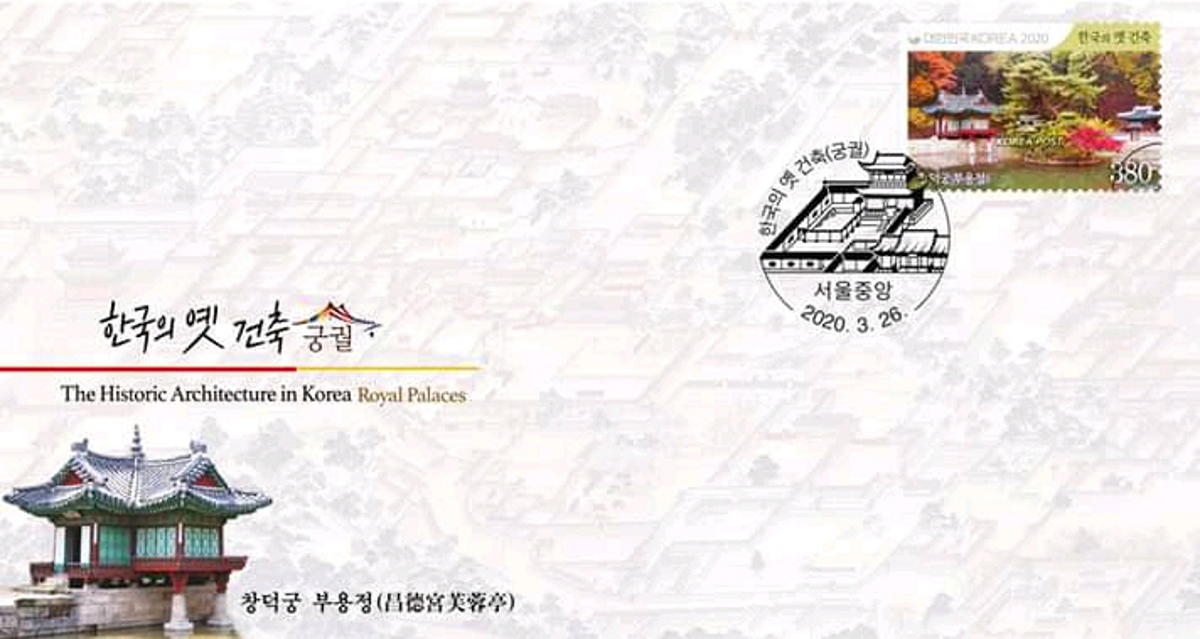 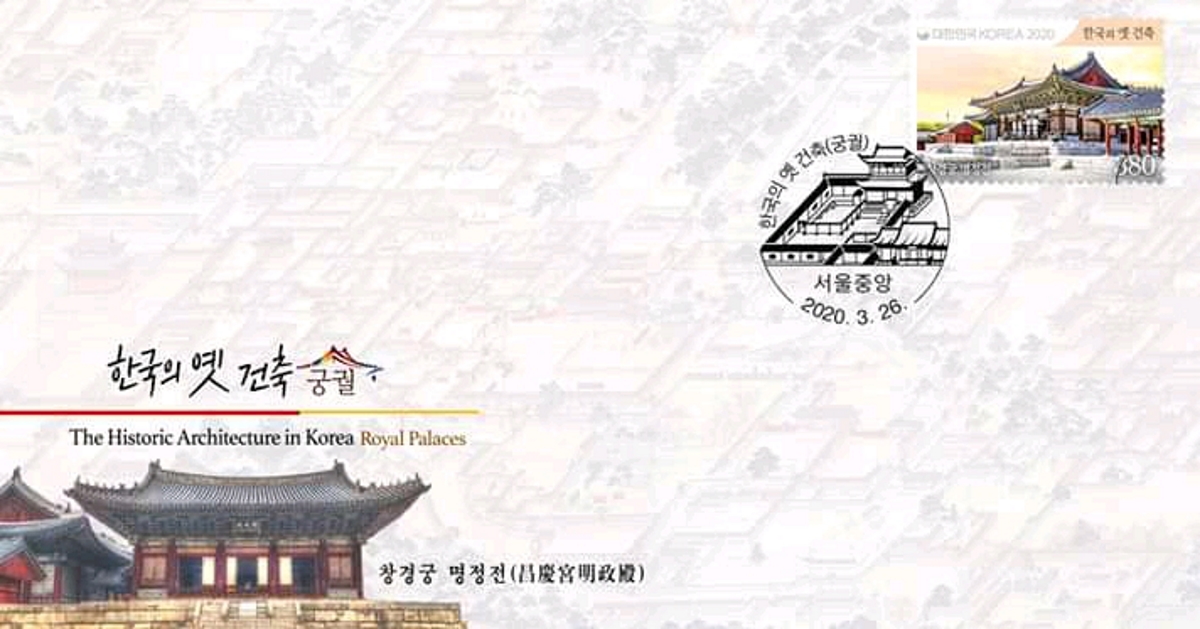 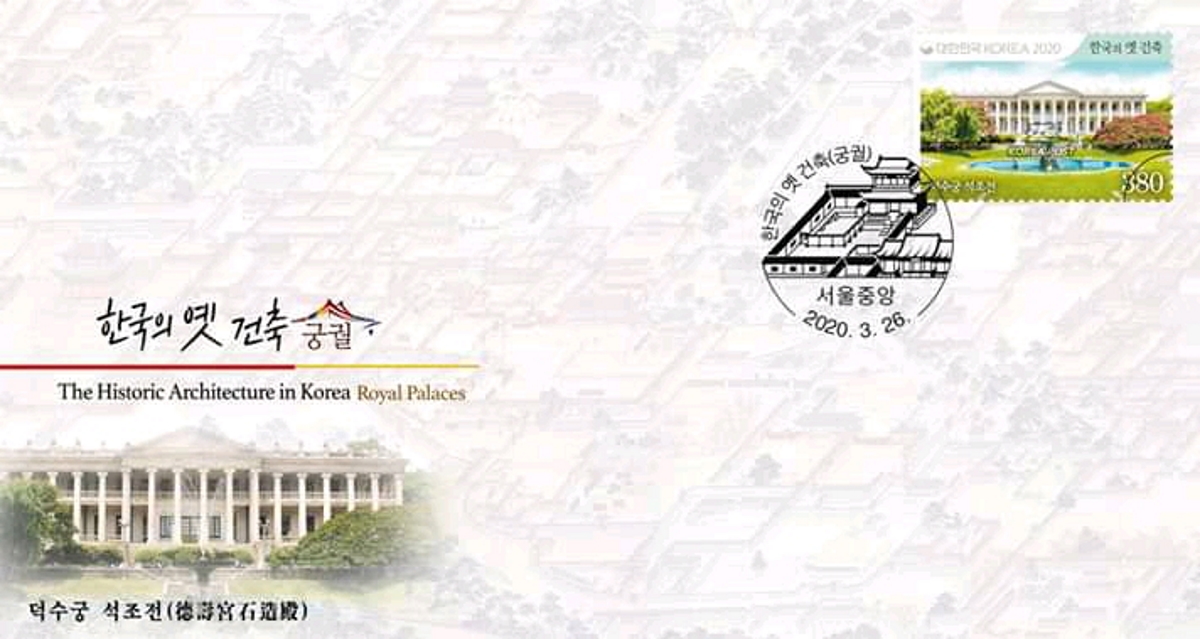 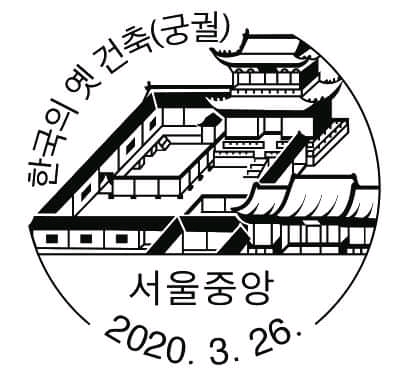