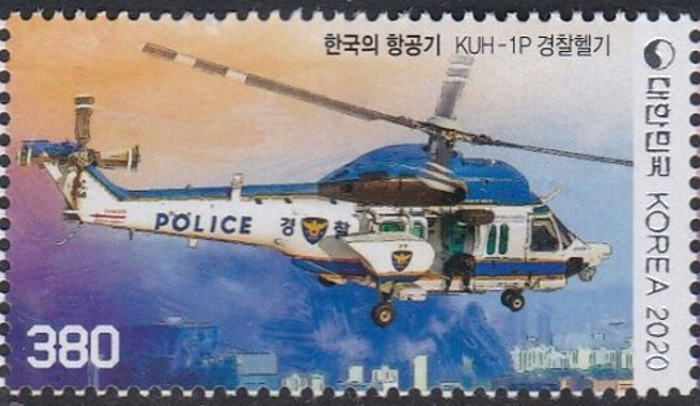 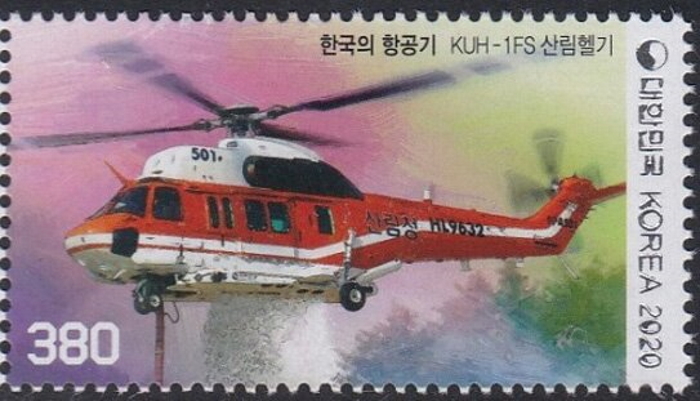 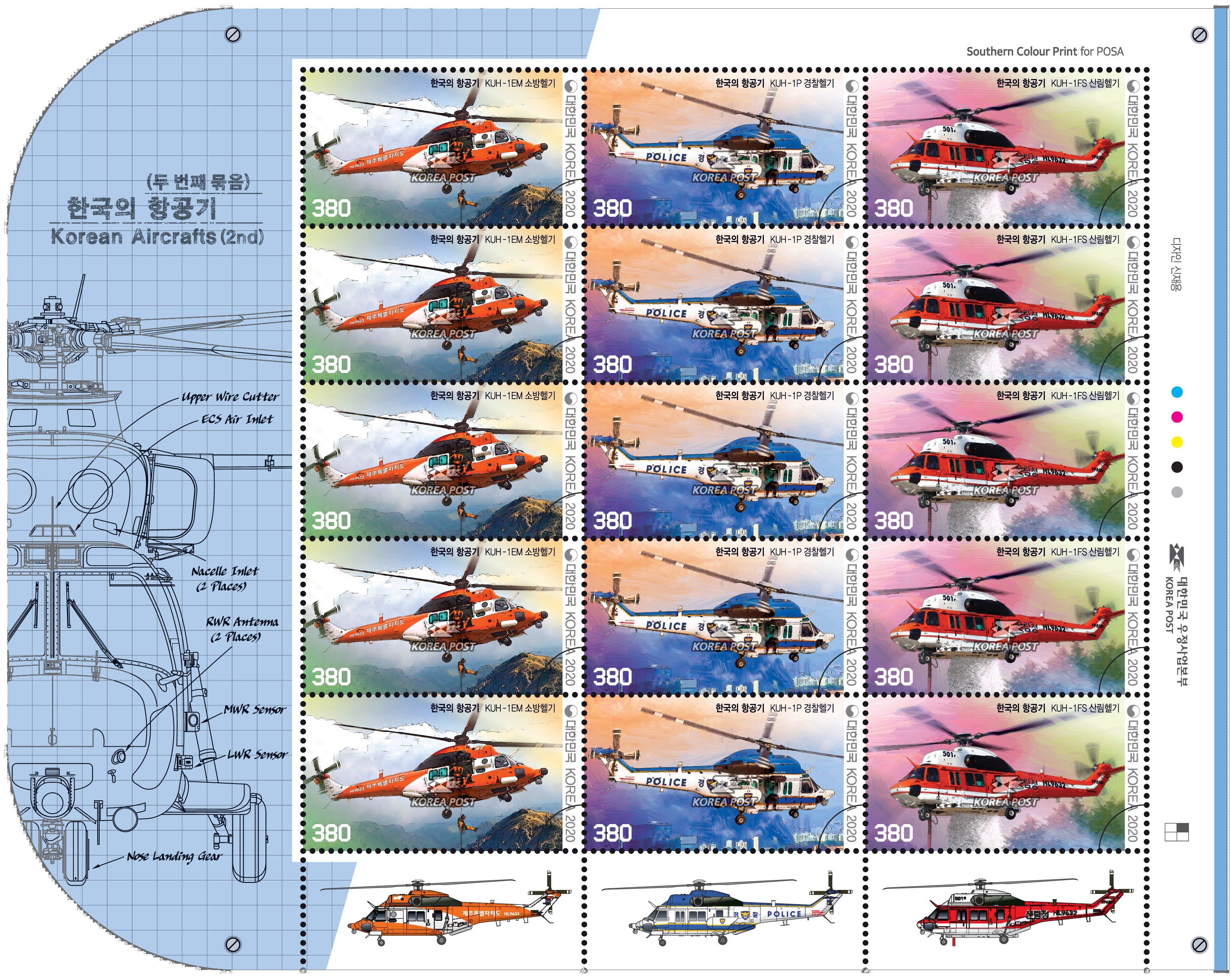 (News from 우정사업본부 / KoreaPost) On 20 March 2020 KoreaPost issued a series of three stamps showing aircraft produced in Korea, the second in the series showing Korean aircraft. These aircraft are the KUH-1EM, the KUH-1P and the KUH-1FS, which are all helicopters produced by Korea Aerospace Industries. These helicopters were the result of the “Korea Helicopter Project – Korea Utility Helicopter (KHP-KUH)”, which is still visible in the helicopter designations through the KUH abbreviation.

KoreaPost released the stamps in a commemorative (souvenir) stamp sheet of 15 (3×5) stamps of 380 won each, printed by Southern Colour Print for POSA. 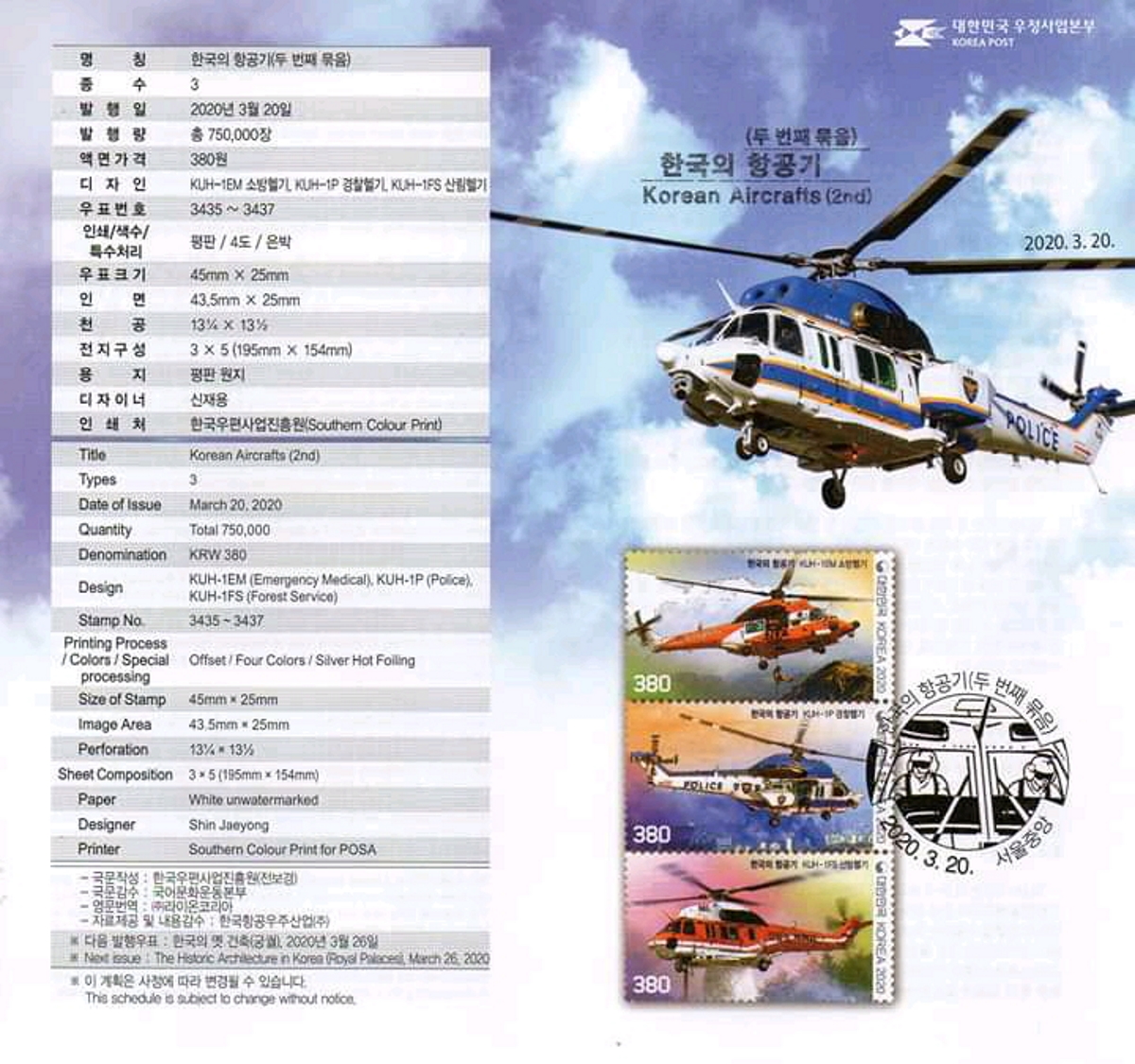 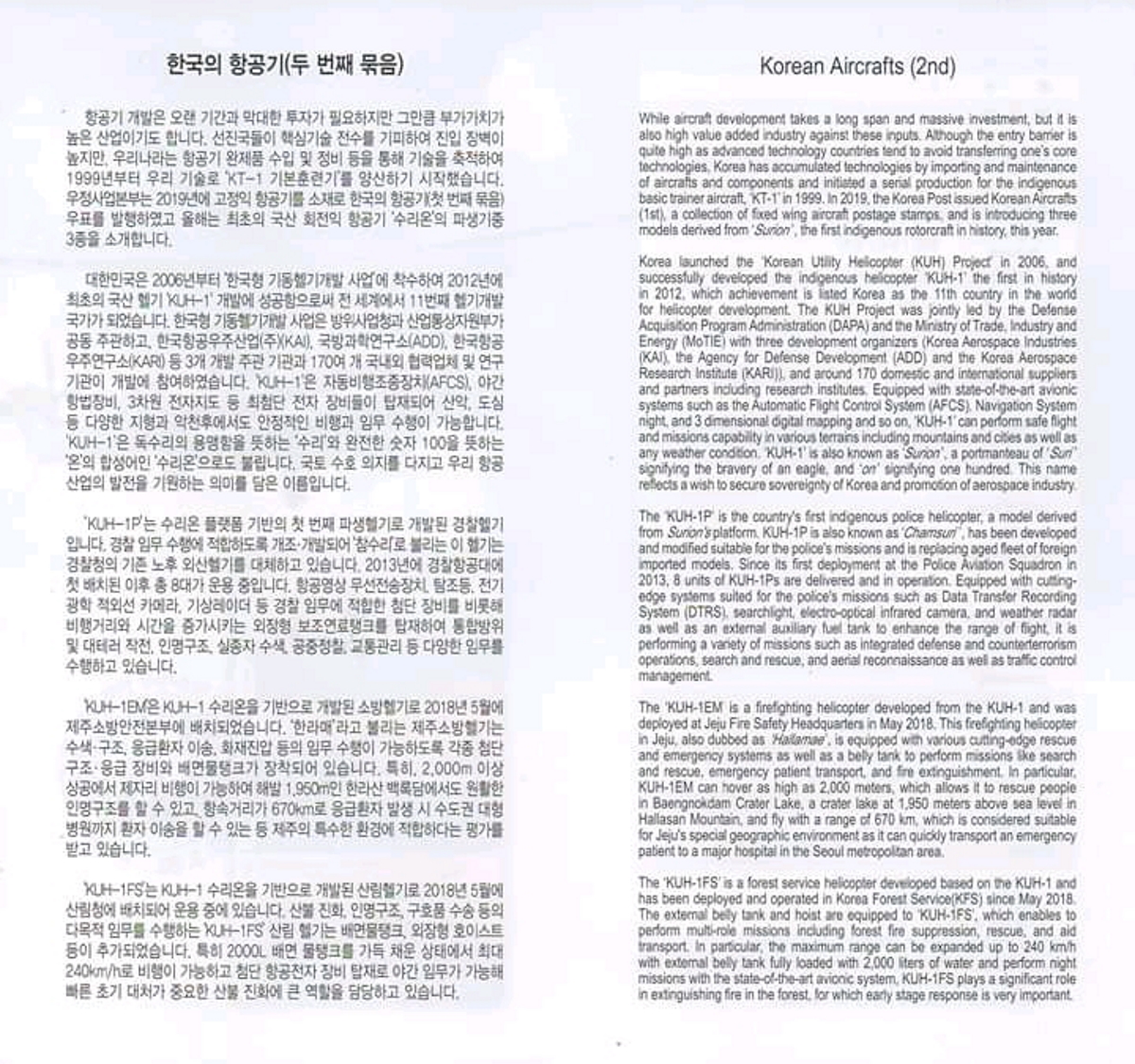 While aircraft development takes a long span and massive investment, but it is also high value added industry against these inputs. Although the entry barrier is quite high as advanced technology countries tend to avoid transferring one’s core technologies, Korea has accumulated technologies by importing and maintenance of aircrafts and components and initiated a serial production for the indigenous basic trainer aircraft, ‘KT-1’ in 1999. In 2019, the Korea Post issued Korean Aircrafts (1st), a collection of fixed wing aircraft postage stamps, and is introducing three models derived from ‘Surion ’, the first indigenous rotorcraft in history, this year.

Korea launched the ‘Korean Utility Helicopter (KUH) Project’ in 2006, and successfully developed the indigenous helicopter ‘KUH-1’ the first in history in 2012, which achievement is listed Korea as the 11th country in the world for helicopter development. The KUH Project was jointly led by the Defense Acquisition Program Administration (DAPA) and the Ministry of Trade, Industry and Energy (MoTIE) with three development organizers (Korea Aerospace Industries (KAI), the Agency for Defense Development (ADD) and the Korea Aerospace Research Institute (KARI)), and around 170 domestic and international suppliers and partners including research institutes. Equipped with state-of-the-art avionic systems such as the Automatic Flight Control System (AFCS), Navigation System night, and 3 dimensional digital mapping and so on, ‘KUH-1’ can perform safe flight and missions capability in various terrains including mountains and cities as well as any weather condition. ‘KUH-1’ is also known as ‘Surion ’, a portmanteau of ‘Suri ’signifying the bravery of an eagle, and ‘on ’ signifying one hundred. This name reflects a wish to secure sovereignty of Korea and promotion of aerospace industry.

The ‘KUH-1P’ is the country`s first indigenous police helicopter, a model derived from Surion`s platform. KUH-1P is also known as ‘Chamsuri ’, has been developed and modified suitable for the police`s missions and is replacing aged fleet of foreign imported models. Since its first deployment at the Police Aviation Squadron in 2013, 8 units of KUH-1Ps are delivered and in operation. Equipped with cuttingedge systems suited for the police`s missions such as Data Transfer Recording System (DTRS), searchlight, electro-optical infrared camera, and weather radar as well as an external auxiliary fuel tank to enhance the range of flight, it is performing a variety of missions such as integrated defense and counterterrorism operations, search and rescue, and aerial reconnaissance as well as traffic control management.

The ‘KUH-1EM’ is a firefighting helicopter developed from the KUH-1 and was deployed at Jeju Fire Safety Headquarters in May 2018. This firefighting helicopter in Jeju, also dubbed as ‘Hallamae ’, is equipped with various cutting-edge rescue and emergency systems as well as a belly tank to perform missions like search and rescue, emergency patient transport, and fire extinguishment. In particular, KUH-1EM can hover as high as 2,000 meters, which allows it to rescue people in Baengnokdam Crater Lake, a crater lake at 1,950 meters above sea level in Hallasan Mountain, and fly with a range of 670 km, which is considered suitable for Jeju`s special geographic environment as it can quickly transport an emergency patient to a major hospital in the Seoul metropolitan area.

The ‘KUH-1FS’ is a forest service helicopter developed based on the KUH-1 and has been deployed and operated in Korea Forest Service(KFS) since May 2018. The external belly tank and hoist are equipped to ‘KUH-1FS’, which enables to perform multi-role missions including forest fire suppression, rescue, and aid transport. In particular, the maximum range can be expanded up to 240 km/h with external belly tank fully loaded with 2,000 liters of water and perform night missions with the state-of-the-art avionic system, KUH-1FS plays a significant role in extinguishing fire in the forest, for which early stage response is very important. 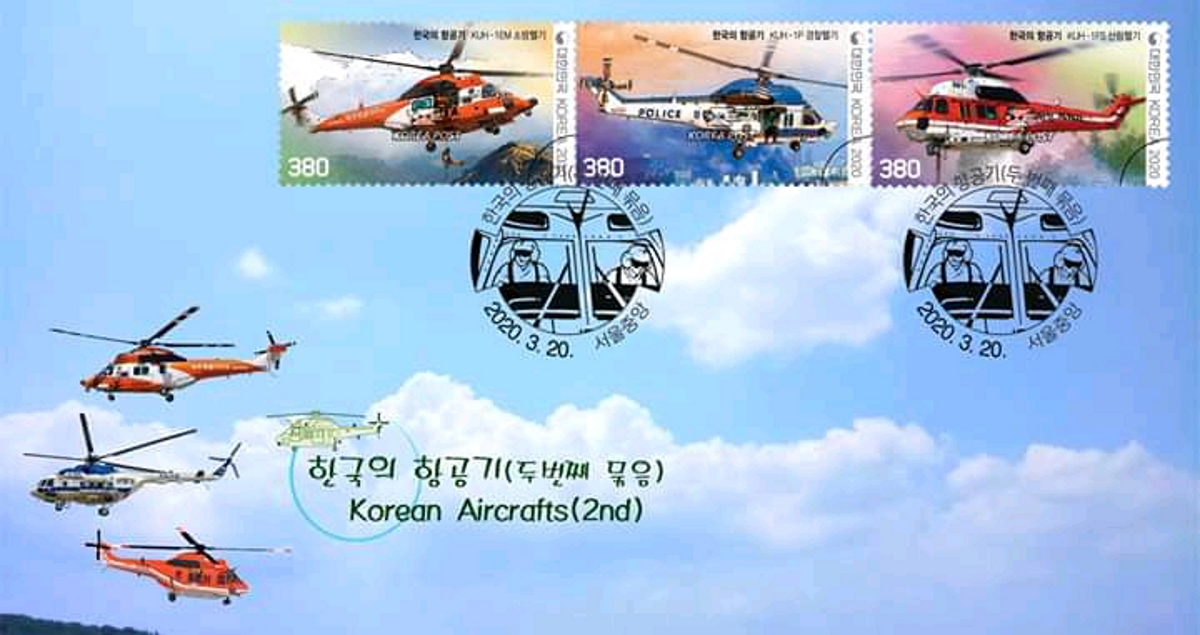 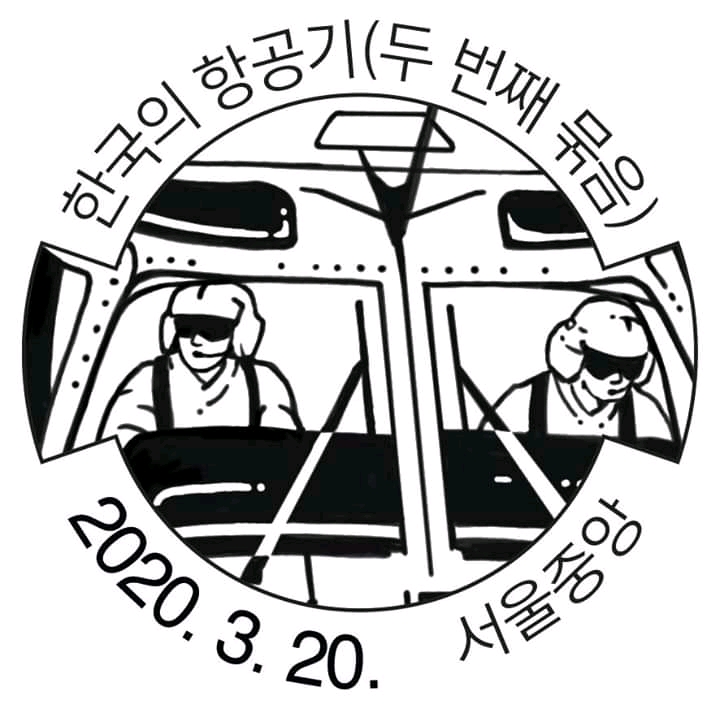