The mountainous geography of the Principality of Andorra has always played a role in external communication. It is an inconvenience made no easier by the harsh winter climate, which can occasionally make communication with the region impossible, and the scattered, isolated homes of its population.

However, its natural features actually provided a means of communication, as the Valira river connects Andorra la Vella with La Seu d’Urgell. On-foot couriers used to travel along this first route with the correspondence on the back of their mules in order to maintain communication between the two towns.

In 1730, La Seu opened its own post office to handle the post coming into and from Andorra.

As there was no official delivery service, the recipients themselves had to collect their post after receiving word from person responsible in the Consell General (General Council of Andorra).

Between 1750 and 1780, it was decided that the person responsible for the post in the Consell General would provide an unofficial post delivery and collection service for the towns in the valleys. A short time later, the system of on-foot couriers was established. They would carry the post with their mules twice a week, from Andorra la Vella and Sant Julià de Lòria to La Seu d’Urgell.

In 1877, Spain appointed Tomás Rossell i Moles as the official in charge. In addition to selling stamps for use in the Principality, he collected and delivered correspondence from La Seu.

This structure was maintained until 1927, when a Royal Order created a Central Administration in Andorra la Vella with staff from Correos. It consisted of six postmen, several on-foot couriers and even a car driven from Andorra la Vella to Encamp.

When the road connecting La Seu d’Urgell and Andorra la Vella opened in 1913, the mule transport was replaced by the first buses and cars. 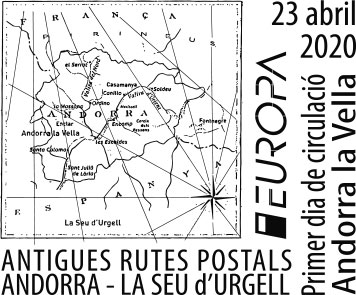