Carolina Plandolit i Pelati was the second wife of Guillem d’Areny i Plandolit, the third baron of Senaller y Gramenet, and one of the most well-known descendants of the Areny-Plandolit lineage, one of the most powerful families of the Principality of Andorra.

Carolina Plandolit was his first cousin, betrothed to the baron following the tragic death of his first wife, Maria Dolors Parrella i Fivaller, who was killed by the Infantry Colonel, Blas Durana, as she did not return his love.

From her marriage with the baron she had ten children, who maintained the D’Areny-Plandolit lineage through their surnames.

Following the death of the baron in 1876, a dispute began between the children of the two marriages, which marked the beginning of the family’s decline.

Carolina Plandolit was born in Sans, on a unknown date in the last quarter of the nineteenth century. She died in Barcelona on 9 February 1902.

The stamp’s motif is composed of a portrait that Carolina Plandolit has in the Casa Museo d’Areny-Plandolit, in the parish of Ordino, with the Pyrenees in the backdrop. 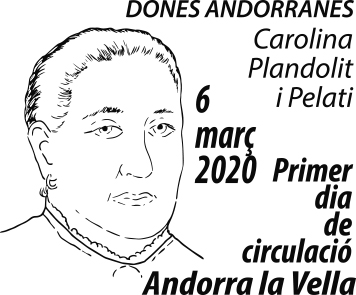