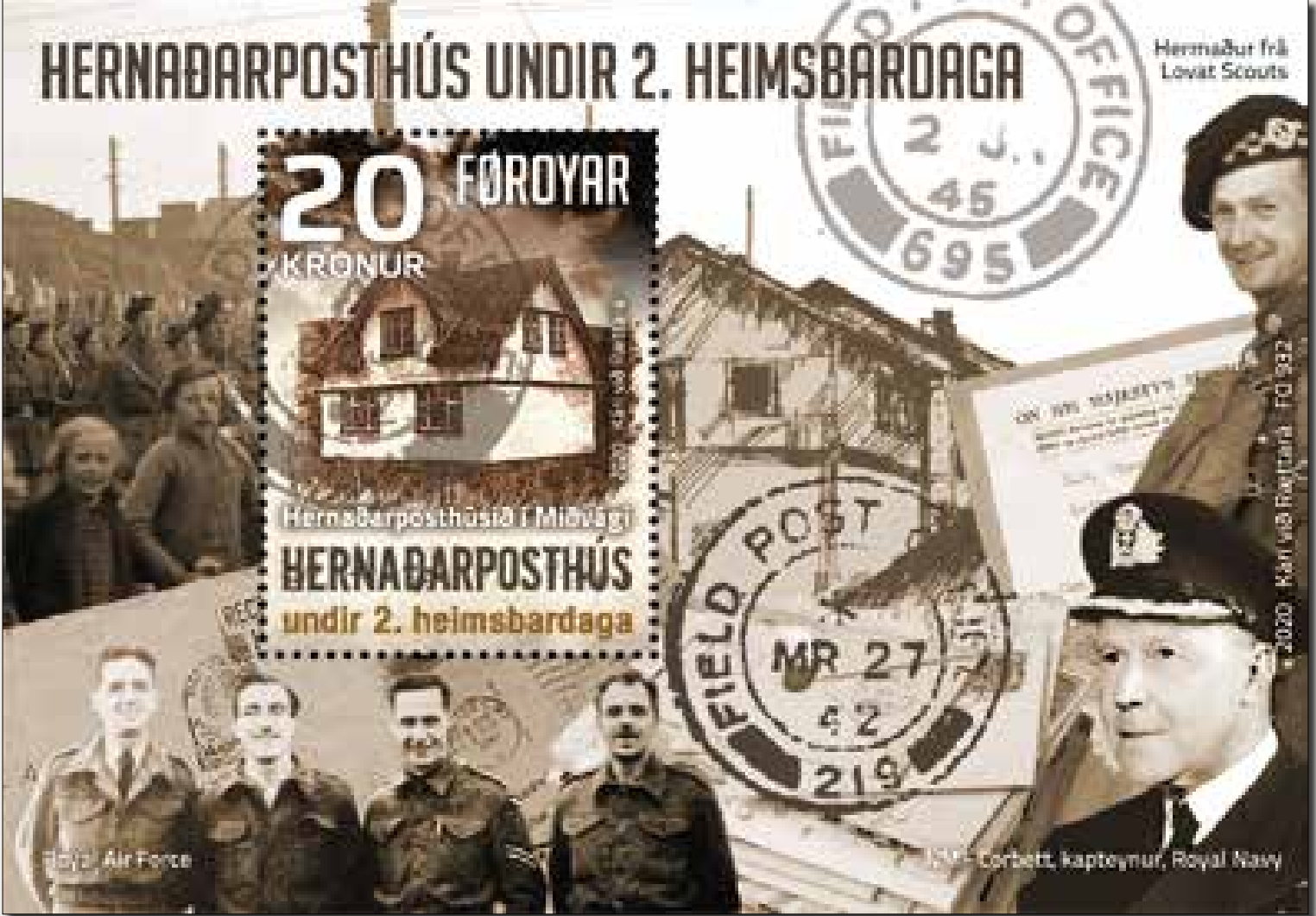 On the left of the sheet, you see the Lovat Scouts who served on the Faroes as an infantry unit from 25 May 1940 until 10 June 42. Below the Lovat Souts you see unidentified Royal Air Force (RAF) Personnel from the RDF (Radar) station at Eiðiskollur. Eiðiskollur was one of the five radar stations manned by the RAF on the Faroes in WW2.

An Unidentified Soldier of the Lovat Scouts is pictured on the right side. The bag on his chest held his respirator (‘gas mask’). And below you see the photo of Captain NMF Corbett, Royal Navy. He was the Naval Officer in Charge and Fortress Commander Faroe Islands from November 1941 until March 1945. He was also the senior British officer on the Faroes.

After German forces invaded and occupied Denmark on 9th April 1940 Britain acted quickly to secure Denmark’s territories in the North Atlantic by sending forces to Iceland and the Faroe Islands. On the 10th April Winston Churchill had addressed the British Parliament on the need to undertake this military action, describing the Faroe Islands as “a strategical point of great importance”. At this time Churchill was yet to become Britain’s wartime leader but was First Lord of the Admiralty, the Government minister responsible for the direction of the Royal Navy (RN). As well as denying the enemy the use of the Faroes the RN had plans to use the deep anchorages such as Skálafjørður for its own major battleships (although this ambition was never to be realised). In these circumstances it is no surprise that the first British forces on the Faroes were a unit of Royal Marines – the infantry arm of the RN. This initial force was small, less than 200 lightly armed Marines were landed in Tórshavn on 13th April.

By the end of May the Marines had returned to Britain having been replaced by a more substantial Army unit, some 500 Lovat Scouts, a Territorial Army regiment from the Highlands and Islands region of Scotland. Pretty soon afterwards other Army units were also being deployed to the islands. These included significant numbers of Royal Engineers (RE) and Pioneer Corps units to oversee and effect necessary construction tasks and Royal Artillery (RA) to install and operate gun batteries protecting key locations from attack by sea or air (after June 1940 the Faroes came within range of the Luftwaffe operating from airbases in Norway). The entrance to Skálafjørður the Royal Navy’s deep water anchorage, was protected by batteries of coastal guns at Fort Skansin, Strendur and Nes and the remains of those can still be seen to this day at all three locations.

So even just a few weeks into the establishment of the British Garrison on the Faroes, which included a small Royal Naval detachment of approximately 175 men, there were a significant number of troops there and it was necessary to ensure the smooth and timely transmission of mail to and from them. The RE’s duties included some activities that might not immediately be associated with engineering skills and one of these is the fact that they were responsible for the Army’s mail services. Records reveal that on 3rd May 1940 Field Post Office (FPO) number 219 was allocated to Army Post Office (APO) number 400 for use in the Faroes. Maybe the canceller was brought to the islands with the Lovat Scouts in May but, as no known usage of it has been seen before late June, it is more likely that it was not received there until a few weeks afterwards.

At its peak the British Garrison in the Faroes totalled some 7,000 personnel. The most significant increase in  numbers occurred when the decision was made to go ahead with the construction of an airfield and a flying boat base. From their initial occupation of the islands the British had carried out surveys seeking a potential location.

Eventually the island of Vágar was chosen as “the least impossible site to build an airfield”. Construction work began in 1942 and whilst it was underway the Royal Air Force (RAF) operated flying boats on Sørvágsvatn. At its peak, there were over 3,500 military personnel on just this one island – far outnumbering its then civilian population. Of this total some 1,200 were from specialist construction units of the Royal Engineers alongside over 2,000 members of the Pioneer Corps and with additional RA batteries from August 1942 onwards.

Consequently a further FPO, number 611, came into operation at Miðvágur, on Vágar, being formally allocated to that location on 21st May 1942, although it may have been several weeks after that date before it came into operational use there. Its final known use was in March 1944. Only one of the three runways originally planned was ever completed. By then the Battle of the North Atlantic was essentially won and improvements to the operational ranges of the aircraft available to the Allies also meant that more patrols could be carried out from airfields in Scotland or Iceland.

RAF Vágar ceased operations in October 1944 and, on 15th December 1944, the airfield was transferred from the British to the Faroese authorities (although British records at that time recorded the opinion that “it was unlikely ever to be safe for civilian operations”). Fortunately that prediction proved to be inaccurate although it was some time before it was proved to be so. There were to be some commercial flights in 1946 but that service was short-lived and it was not until the 1960s that regular commercial services became operational. However, with the benefit of hindsight, it can be argued that the construction of the airfield has proved perhaps to be the most enduring and useful legacy of the British occupation.

The third and final FPO that operated in the Faroes was number 695. This was allocated for use on 13th March 1943 and employed in Tórshavn until September 1945 when the last of the regular Garrison left the islands. (A small detachment of Royal Navy and then RAF personnel continued to man the LORAN station that had been erected at Skúvanes on Suðuroy until the end of 1946 when Danish naval personnel fully took over its operation). FPO 695 was clearly a replacement for FPO 219 but the reason behind this change is unclear and there was a period of several months when use of their cancellers overlapped.

Recent research in the Faroes has led not only to the identification of where the FPOs were located but also the discovery of some near contemporary photographs of the buildings they occupied. The one in Tórshavn was in the basement Tinghúsvegur 45 (nowadays renumbered to be 49). This was the home of Hans Joensen (Hansemann) and family and they continued to live in the upper storeys of the house. The 35KR stamp shows a pencil drawing of this house made by the well-known Faroese artist Ingálvur av Reyni.

The building occupied by the Miðvágur FPO had been built in the 1930s and its present day address is Bótalsvegur 11. The Hansen family who had lived there, moved to Leirvík after the property was requisitioned by the British military. An image of the property has formed the basis of the design of the 20KR stamp.

What about the personnel who worked in the FPOs? Surprisingly we can identify one of those who wielded the FPO 219 canceller on military mail leaving the islands. He was an NCO in the Royal Engineers, Sergeant Kenneth Williamson who, in correspondence after the war with a leading early collector of Faroese philately and postal history, confirmed that this was amongst his duties from his arrival in the Faroes in September 1941 until sometime the following year. However much Williamson appreciated that duty he certainly enjoyed his posting to the islands, researching their natural history and culture in his spare time and also meeting his future wife there, becoming one of the several British servicemen who married local girls. Williamson’s wedding to Esther Rein, the youngest daughter of Niels and Hansina Rein of Landavegur, Tórshavn, took place in the Havnar Kirkja on 14th March 1944.

On his return to Britain after the war, Williamson wrote “The Atlantic Islands: The Faeroe Life and Scene”, which was published by Collins in 1948 and which was for many years the definitive English text on the islands. 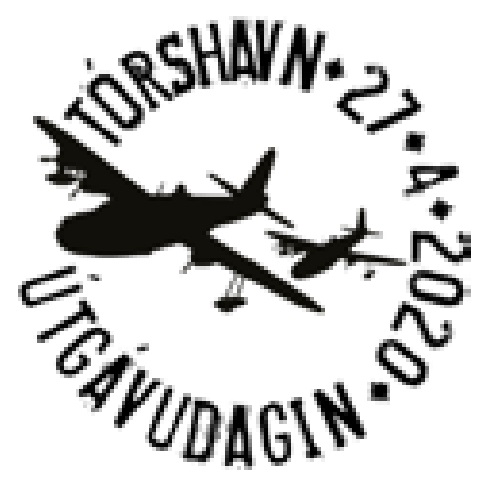