SEPAC — Artwork in the National Gallery

A brightly coloured row of birds meets the eye, all in profile, slightly shifted to the rear of each other, each on its own small elevation. Strong yellow, blue, green and red fields light up in between the brown and black surfaces of the birds’ plumages. Even if the patterned colour surfaces lend the arrangement a decorative touch, we clearly note that the subject matter is pigeons. And should you have any doubt, the stamp sheet carries the inscription: “Moon Pigeons”, a title indicating the fantasy world to which these pigeons belong.

The fragile images on paper is one of four having survived time by something of a miracle. These images were created during the first part of the 19th century. They were originally mounted in a glass frame and hung up in the living room of a family at Sandoy. However, due to stove heating the frame fell apart and the sheets were preserved in an old Bible. They were then totally forgotten until they finally reappeared and were sold to the Faroese Art Society in 1954. A fifth and final picture later found its way to the Museum’s collection as a donation from another branch of the family.

Thanks to the family at Sandoy we know the name of the artist. He was one of the family’s ancestors, known as Díðrikur á Skarvanesi. Due to the pictures’ age and artistic quality, Díðrikur must be considered first Faroese artist, creating his works some hundred years before “Faroese art” became a recognized concept starting with the renowned painter Samuel Joensen-Mikines and his successors.

Díðrikur á Skarvanesi (1802-65) was a farmer from the island of Stóra Dímun. He concluded his life in the village of Skarvanes in Sandoy, from which he has his nickname. However, Díðrikur í Kárastovu, which was his actual name, was hardly any ordinary peasant. We know that in 1828 he was living in Copenhagen and may have returned to the Faroes in the spring of 1829 at the earliest. The Copenhagen stay has given rise to the suggestion that he was studying at the Royal Academy of Arts.

These five drawings are the only ones that we know with certainty that were created by Díðrikur á Skarvanesi. They are made in gouache, i.e. water colour with high pigment concentration as well as a white dye which solidifies the colours while dimming them at the same time. Most of the birds in Díðrikur’s gouaches are wild Faroese birds. The gouaches must also have been made in the Faroe Islands, because according to ornithologist Jens-Kjeld Jensen there is a white-speckled raven among the birds in the paintings, a species which was found in the Faroes at that time but is now extinct. The appearance of the fulmar may also indicate
at which time the gouaches were made, since this species first started breeding in the Faroe Islands in 1839.

Birds and their eggs were an important nutritional supplement in Díðrikur’s time. He would himself have followed the tradition of catching birds and collecting eggs which means that he literally had the motives at hand in close proximity. With the birds arranged in a row, his gouaches are reminiscent of posters in numerous scientific books of ornithology published in Europe and America in the 18th and 19th centuries. Where, and if, Díðrikur has seen such books cannot be ascertained, but we know that sometime between 1835 and 1840 he worked for a pastor who served a parish in the northern part of Streymoy island and was deeply interested in nature.

The style of the gouaches, however, is anything but a realistic and detailed reproduction of scientific bird painting. We know, nevertheless, of decorative stylizations close to Díðrikur’s representation from Scandinavian art. In this case the Swedish Dalhäst (traditional carved, painted wooden statue of a horse originating in the Swedish province of Dalarna) could be a relevant parallel. In any case, the style of the gouaches clearly indicates that the artist did not frequent the Academy of Fine Arts in Copenhagen with its ideals in classical art. Neither does Díðrikur in Kárastovu appear in the Academy’s student records.

As to the “Moon Pigeons”, we may wonder about the sizes. Today, the Faroese “mánadúgva” designates the common wood pigeon (columba palumbus), but according to Jens-Kjeld Jensen this species was extremely rare in the Faroe Islands in Díðrikur’s days when woods and forests were non-existent. Actually, the name refers to the rock pigeon (columba livia) which was far more frequent. Unlike the wood pigeon, it lays its eggs once a month from spring to mid-summer. It is in this mundane sense that “moon pigeons” must be understood.

There is some evidence, however, that Díðrikur á Skarvanesi became seduced by the poetic character of the term. On another sheet of paper we find a much more realistic rock pigeon in bluish plumage. In the artist’s mind it gave way to the more imaginative and colourful creatures in the Moon’s Pigeons artwork. 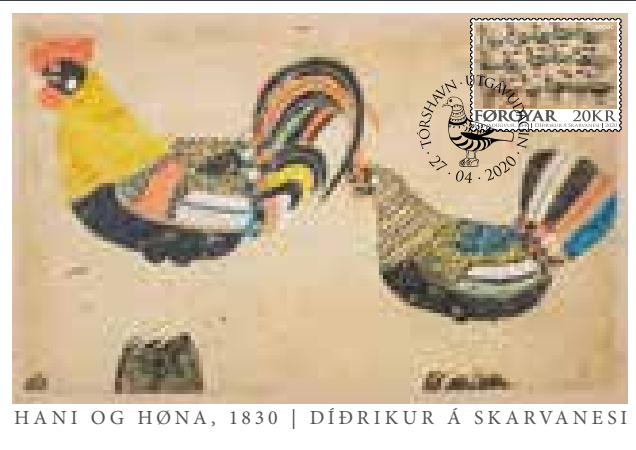 In connection with the Sepac 2020 stamp issue we also issue a poster and a postcard. The poster is printed in quality paper and the size is 420 x 297 mm (A3). It has the motif of the stamp: Maanens Duuer. Limited edition as only 100 posters have been printed.
Price: 95,00 DKK

The postcard has the size of 170 x 120 mm and illustrates another artwork by Díðrikur á Skarvanesi from the same period, ”Hani og høna” (Rooster and Hen).
Price, postcard: 7,00 DKK
Price, maximumcard: 27,00 DKK 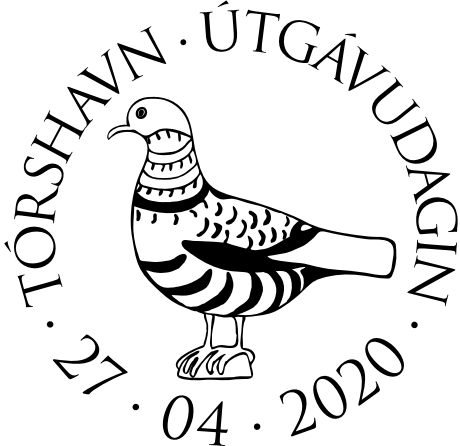