On April 16, 2020, Her Majesty the Queen celebrates her 80th anniversary. H.M. Queen Margrethe II was born on April 16, 1940, at Amalienborg. She was the daughter of King Frederick IX and Queen Ingrid, born Princess of Sweden.

Margrethe Alexandrine Þórhildur Ingrid, which is her full name, became Queen of Denmark on January 14, 1972 and has now reigned for 48 years.

Celebrating the Queen’s anniversary Posta is issuing a souvenir sheet featuring the Queen. The motif is the Faroe Islands’ official present to the Queen on the occasion of her 40th regent anniversary in 2012. The present was a painting of the Queen by artist Edward Fuglø.

Bird Song And Animal Language She Was Able To Understand

It bears a keen resemblance to an adventure, a legend from days of old. And to some extent, it is also an adventure superbly expressed in Edward Fuglø’s painting.

Shown in regal profile, the Queen sprouts up from the Faroese coast, surrounded by a large number of animals, preferably birds. One comes to think of adventures in which wild animals come to the aid of a hero or heroine in distress. This is actually the case here, as evidenced by the title which the artist has given to his painting.

The title consists of a slightly altered quote from a well-known Faroese folk ballad, Sjúrðarkvæði, more specifically the first part of the ballad Regin Smiður (Regin the Smith): “She was well acquainted with birds and beasts of wild”. Strictly speaking, it’s Sjúrður, the hero of the ballad, who suddenly understands bird language after having killed the dragon Frænir and tasted its blood. However, thanks to the change of “he” to “she” in the title, it is the Queen who understands messages conveyed by the animals – an elegant compliment indeed.

The birds are as follows: Oystercatcher, the shag , the great skua , the razorbill, the fulmar, the common eider, black-backed gull, the guillemot, the puffin, the artic tern, the gannet, the common murre, the hooded crow, the raven, the starling and the whimbrel – all Faroese birds. In addition we have the ram and the hare, the only four-legged creatures found in Faroese nature. Along with the birds they form group of eighteen – corresponding to the number of islands in the Faroese archipelago.

The Queen’s profile has been stylized and gilded as on a minted coin. Thus, she is transformed into an icon vis-à-vis the naturalistically painted animals. She is not merely a person, but an institution as well. It is also in this regal role that most Faroese get to meet Queen in a direct way, namely through the coins bearing her likeness.

The Queen is depicted in her green dress with a cloak, which at the same time hints at the verdant landscape of the Faroe Islands. Here we find small flowers belonging to the native Faroese flora – also eighteen in number corresponding to the number of islands. The stylized flowers are patterned into the Queen’s attire indicating that she has become draped, most becomingly, in the Faroe Islands.

But the adventure doesn’t end here. Thanks to the numerous birds and the Queen’s iconic profile, the painting also contains a reference to Nolsoyar-Páll’s national romantic ”Ballad of the Birds” from ca. 1800. Here a conflict which arises between the native Faroese population and the Danish authorities is depicted in the guise of an allegory – a battle between small birds and ferocious birds of prey – with the king in the shape of an eagle protecting and watching over his people.

However, everything is not pure idyll in Edward Fuglø’s painting. There is also room for humorous commentary. To be sure, the Queen has become an integral part of the Faroese landscape and is accompanied by her faithful companions representing the islands’ wildlife. However, the sturdy ram, being the Faroe Islands’ symbol in the Coat of Arms, looks a bit menacing with its lowered head, seemingly ready to give her a push over the edge. Thus, the Faroese independence movement also gets a slight hint in the artwork! 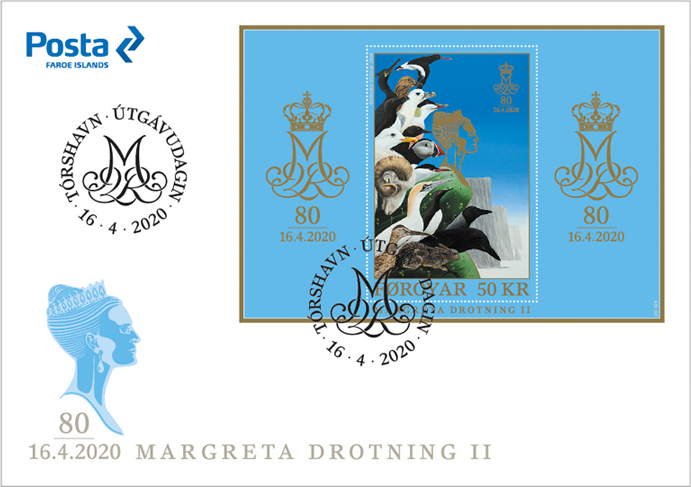 Although the Queen’s profile is at the centre, Edward Fuglø’s work is far from being a portrait in the conventional sense. It is an allegory, i.e. a mental depiction reading somewhat like a challenging tale of the relationship between the Queen and the Faroe Islands. In this way, the picture is typical of Edward Fuglø’s art which always features rich content, as evidenced by the title of the painting which in this case plays a central role in decoding the content.

The style is figurative pop art inspired by photography and advertising, with surreal leaps between different levels of reality. Of these, the most striking breach of reality is the portrayal of the Queen’s profile as minted on Danish coins. In the painting, the artist achieves this with a gilded aluminium relief attached to the artwork’s wooden plate. Thus, the painting gives the impression of a collage composed of various materials.

The past and present meet in Edward Fuglø’s painting, fairy tales and allegories on one hand, humour and modern art expressions on the other. Both formally and substantively, this is a work of abundance which in an ingenious, loving and humorous way, pays tribute to the Queen as the Regent of the Faroe Islands for 40 years. 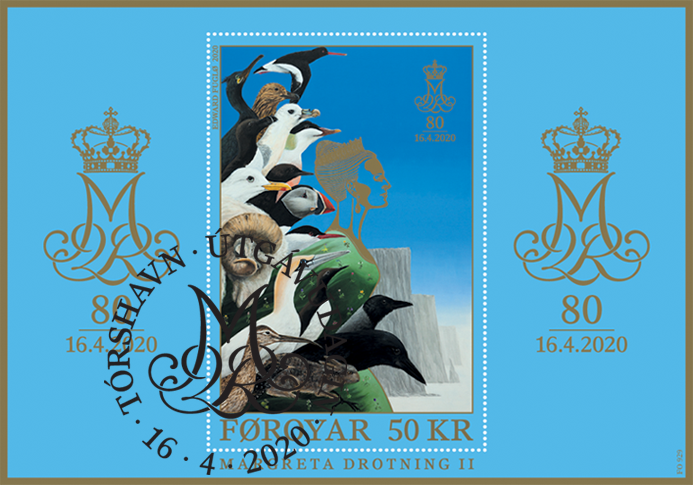 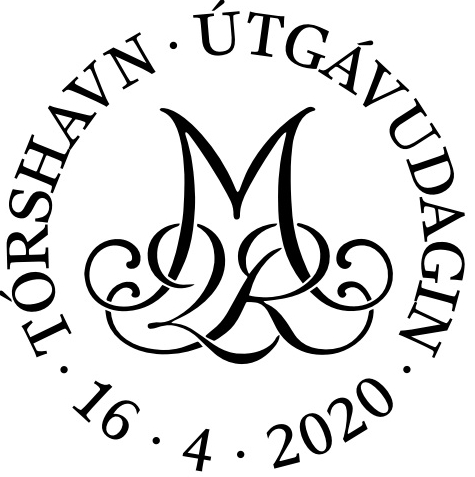 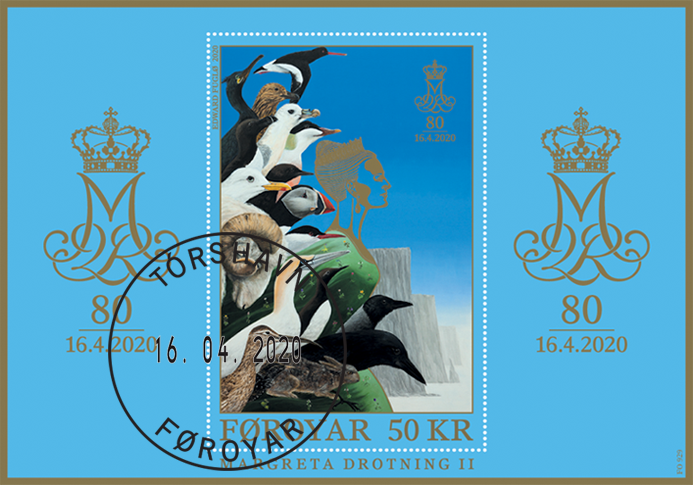 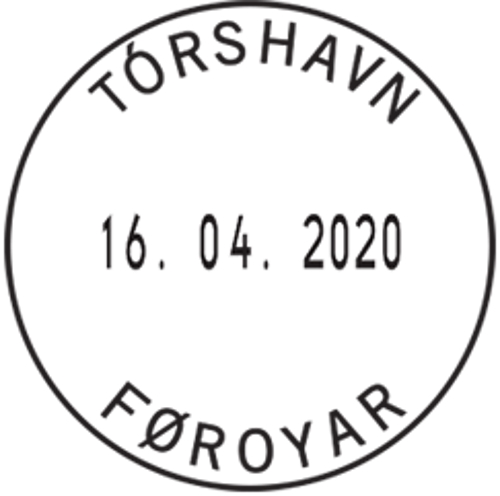 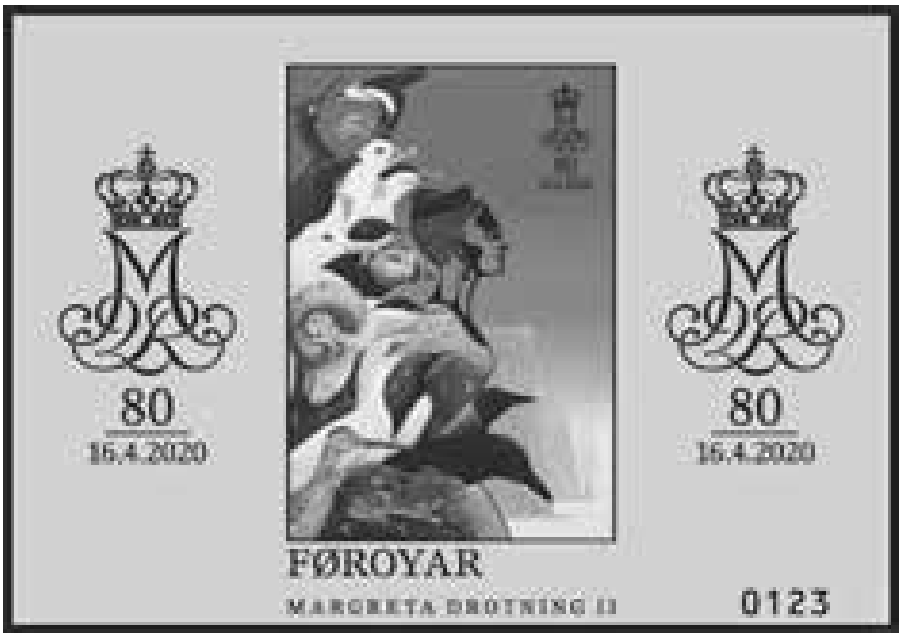 A black print of the mini-sheet has been produced in a limited edition! It is included in the 2020 Yearbook at no additional cost, but is also available separately.
The black print is numbered and printed in 1.500 prints of which only 400 will be sold separately. Size: 10 x 7 cm. Price: 150,- DKK