A short time after the 1890 postage stamps were issued, new versions of the higher Kreuzer values were issued in 1891, with new Gulden stamps following five years later.

The reason for issuing new stamps so quickly was the risk of confusion between the colours, which, in some cases, were extremely similar. In addition to this, the dark background made it difficult to discern the postmark on the Gulden stamps. The risk of confusion was solved by introducing a new design: for the 20, 24, 30 and 50 Kreuzer stamps, the emperor’s portrait is shown in profile facing left as for the 1890 stamps, but it is no longer surrounded by an oval frame, instead being placed in a decorated octagonal one. Furthermore, instead of being printed in round fields, the denominations in black ink were now printed in plain hexagonal frames, making them easier to read. In general, the colours were retained. However, thanks to the new frame shape it was easier to distinguish the higher value Kreuzer stamps from the lower ones. By contrast, for the two stamps with denominations in Gulden, on which the emperor’s head is turned to the right, only lightercolours were used: the dark blue of the 1 Gulden stamp was now replaced by a subtle greyish violet, and the 2 Gulden stamp became sea green rather than dark carmine. The postmark is much easier to see against the lighter background. 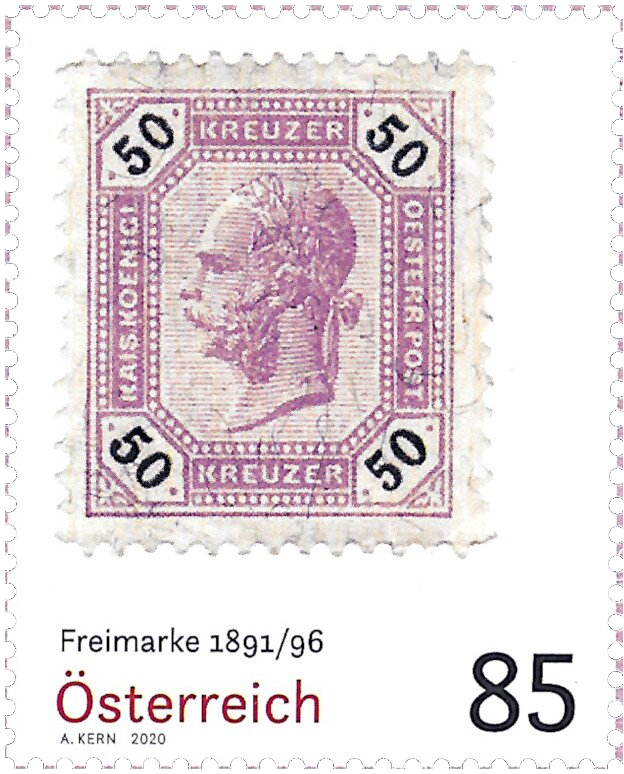 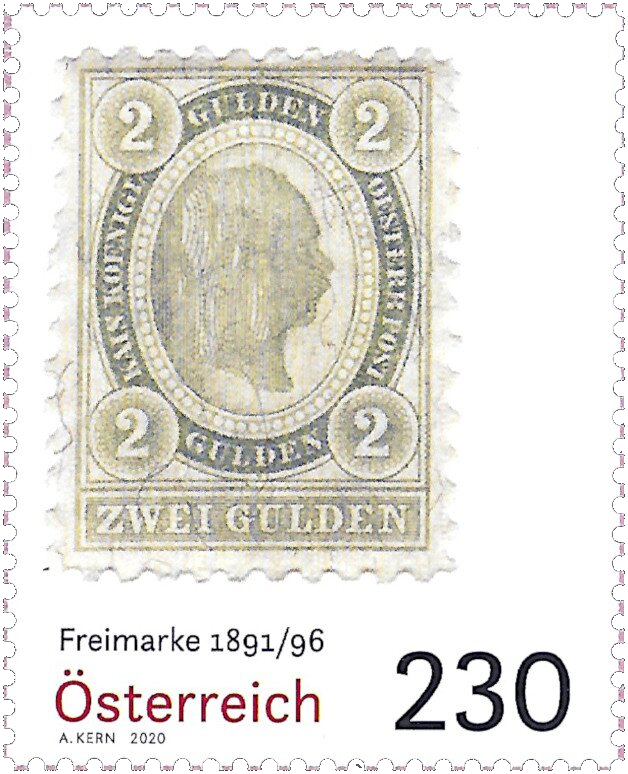 The end of the Gulden

The new Kreuzer stamps were issued on 16th March 1891, with the Gulden ones only following on 1st February 1896. Along with the lower Kreuzer values from the 1890 issue, both types were valid until 30th September 1900. In 1892, however, the currency of Austria- Hungary changed, with the Gulden being replaced by the Krone. From 1900 Gulden ceased to be a valid currency, as a result of which new stamps with values in Krone and Heller were required, these being issued on 1st December 1899.

Like the previous issue, the stamps issued in 1891/96 were printed on paper with fibres running through it, with no watermark and with various types of perforations. Over time the paper used changed from a hard, glassy, yellowish-grey to a soft, white variety. As in the previous issue, the Gulden denominations were printed using intaglio printing.

The stamp block shows a 50 Kreuzer stamp and a 2 Gulden stamp set against a pink background, the design of which is based on the Kreuzer stamp. 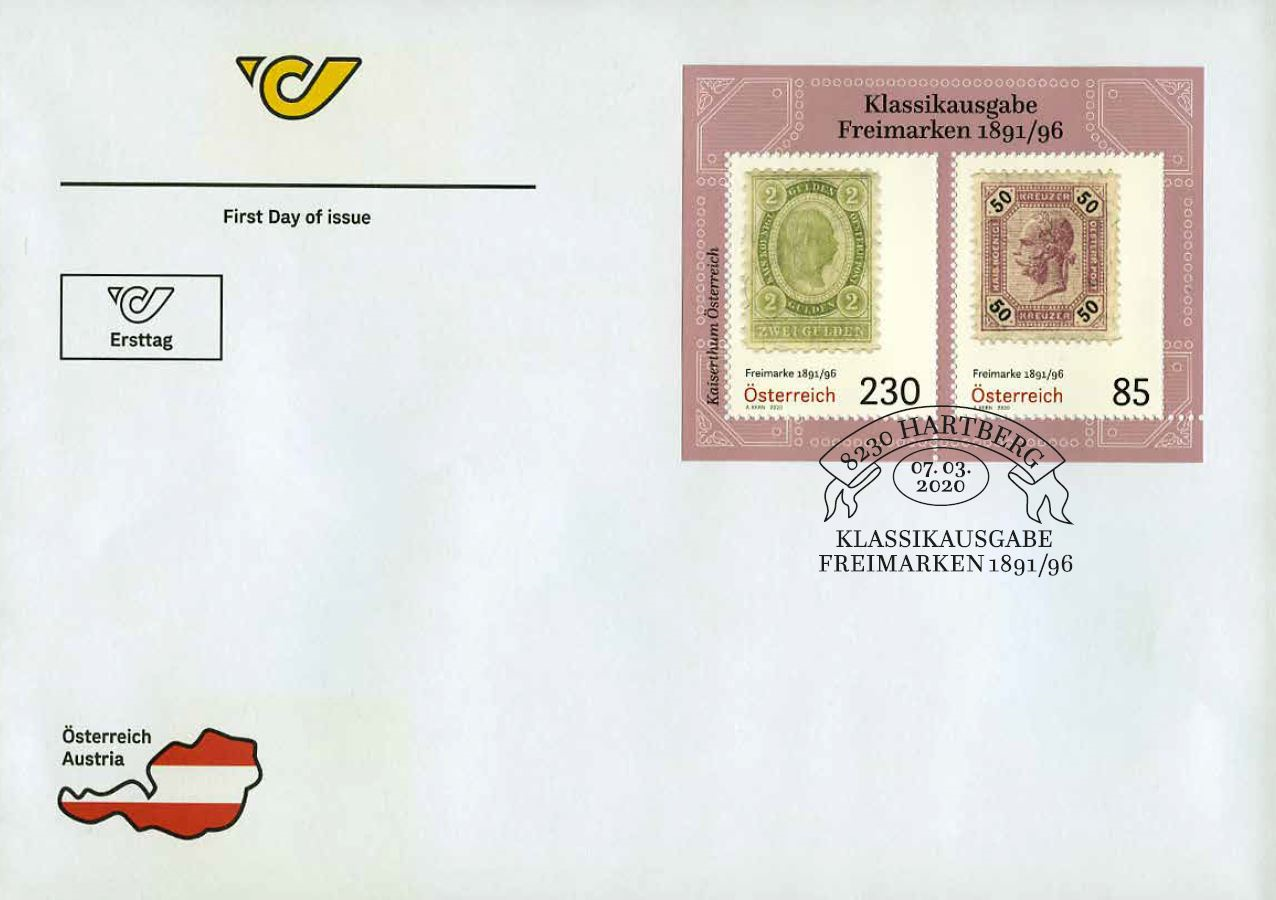 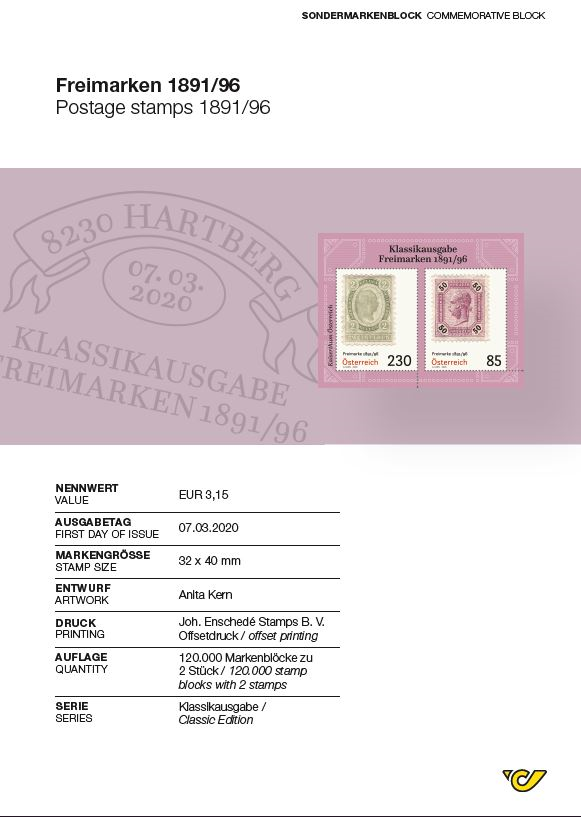 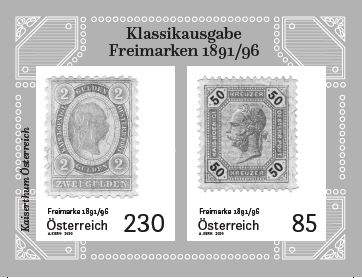