The Declaration of Arbroath (Declaration o Aiberbrothock in Scots, Declaratio Arbroathis in Latin and Tiomnadh Bhruis in Scottish Gaelic) is the name usually given to a letter, dated 6 April 1320 at Arbroath, written by Scottish barons and addressed to Pope John XXII. It constituted King Robert I’s response to his excommunication for disobeying the pope’s demand in 1317 for a truce in the First War of Scottish Independence. The letter asserted the antiquity of the independence of the Kingdom of Scotland, denouncing English attempts to subjugate it.

Generally believed to have been written in Arbroath Abbey by Bernard of Kilwinning (or of Linton), then Chancellor of Scotland and Abbot of Arbroath, and sealed by fifty-one magnates and nobles, the letter is the sole survivor of three created at the time. The others were a letter from the King of Scots, Robert I, and a letter from four Scottish bishops which all made similar points. The Declaration was intended to assert Scotland’s status as an independent, sovereign state and defend Scotland’s right to use military action when unjustly attacked.

Submitted in Latin, the Declaration was little known until the late 17th century and is unmentioned by any of Scotland’s major 16th century historians. In the 1680s the Latin text was printed for the first time and translated into English in the wake of the Glorious Revolution, after which time it was sometimes described as a declaration of independence.

The Declaration was part of a broader diplomatic campaign, which sought to assert Scotland’s position as an independent kingdom, rather than its being a feudal land controlled by England’s Norman kings, as well as lift the excommunication of Robert the Bruce. The pope had recognised Edward I of England’s claim to overlordship of Scotland in 1305 and Bruce was excommunicated by the Pope for murdering John Comyn before the altar at Greyfriars Church in Dumfries in 1306. This excommunication was lifted in 1308; subsequently the pope threatened Robert with excommunication again if Avignon’s demands in 1317 for peace with England were ignored. Warfare continued, and in 1320 John XXII again excommunicated Robert I. In reply, the Declaration was composed and signed, in response, the papacy rescinded King Robert Bruce’s excommunication and thereafter addressed him using his royal title.

The wars of Scottish independence began as a result of the deaths of King Alexander III of Scotland in 1286 and his heir the “Maid of Norway” in 1290, which left the throne of Scotland vacant and the subsequent succession crisis of 1290-1296 ignited a struggle among the Competitors for the Crown of Scotland, chiefly between the House of Comyn, the House of Balliol, and the House of Bruce who all claimed the crown. After July 1296’s deposition of King John Balliol by Edward of England and then February 1306’s killing of John Comyn III, Robert Bruce’s rivals to the throne of Scotland were gone, and Robert was crowned king at Scone that year. Edward I, the “Hammer of Scots”, died in 1307; his son and successor Edward II did not renew his father’s campaigns in Scotland. In 1309 a parliament held at St Andrews acknowledged Robert’s right to rule, received emissaries from the Kingdom of France recognizing the Bruce’s title, and proclaimed the independence of the kingdom from England.

By 1314 only Edinburgh, Berwick-upon-Tweed, Roxburgh, and Stirling remained in English hands. In June 1314 the Battle of Bannockburn had secured Robert Bruce’s position as King of Scots; Stirling, the Central Belt, and much of Lothian came under Robert’s control while the defeated Edward II’s power on escaping to England via Berwick weakened under the sway of his cousin Henry, Earl of Lancaster. King Robert was thus able to consolidate his power, and sent his brother Edward Bruce to claim the Kingdom of Ireland in 1315 with an army landed in Ulster the previous year with the help of Gaelic lords from the Isles. Edward Bruce died in 1318 without achieving success, but the Scots campaigns in Ireland and in northern England were intended to press for the recognition of Robert’s crown by King Edward. At the same time, it undermined the House of Plantagenet’s claims to overlordship of the British Isles and halted the Plantagenets’ effort to absorb Scotland as had been done in Ireland and Wales. Thus were the Scots nobles confident in their letters to Pope John of the distinct and independent nature of Scotland’s kingdom; the Declaration of Arbroath was one such. According to historian David Crouch, “The two nations were mutually hostile kingdoms and peoples, and the ancient idea of Britain as an informal empire of peoples under the English king’s presidency was entirely dead.”

The text makes claims about the ancient history of Scotland and especially the Scoti, forbears of the Scots, who the Declaration claims originated in Scythia Major and migrated via Spain to Britain, dating their migration to “1,200 years from the Israelite people’s crossing of the Red Sea”. The Declaration describes how the Scots had “thrown out the Britons and completely destroyed the Picts”, resisted the invasions of “the Norse, the Danes and the English”,[3] and “held itself ever since, free from all slavery”. It then claims that in the Kingdom of Scotland, “one hundred and thirteen kings have reigned of their own Blood Royal, without interruption by foreigners”. The text compares Robert Bruce with the Biblical warriors Judas Maccabeus and Joshua.

The Declaration made a number of points: that Edward I of England had unjustly attacked Scotland and perpetrated atrocities; that Robert the Bruce had delivered the Scottish nation from this peril; and, most controversially, that the independence of Scotland was the prerogative of the Scottish people, rather than the King of Scots. This should be taken in the context of the time – ‘Scottish People’ refers to the Scottish nobility, rather than commoners. In fact it stated that the nobility would choose someone else to be king if Bruce proved to be unfit in maintaining Scotland’s independence.

The most widely known English language translation was made by Sir James Fergusson, formerly Keeper of the Records of Scotland, from text that he reconstructed using this extant copy and early copies of the original draft.

G. W. S. Barrow has shown that one passage in particular, often quoted from the Fergusson translation, was carefully written using different parts of The Conspiracy of Catiline by the Roman author, Sallust (86–35 BC) as the direct source:

… for, as long as but a hundred of us remain alive, never will we on any conditions be brought under English rule. It is in truth not for glory, nor riches, nor honours that we are fighting, but for freedom – for that alone, which no honest man gives up but with life itself.

In 1998 former majority leader Trent Lott succeeded in instituting an annual “National Tartan Day” on 6 April by resolution of the United States Senate. U.S. Senate Resolution 155 of 10 November 1997 states that “the Declaration of Arbroath, the Scottish Declaration of Independence, was signed on April 6, 1320 and the American Declaration of Independence was modeled on that inspirational document”. However, although this influence is accepted by some historians, it is disputed by others.

2020 is the 700th anniversary of the Declaration of Arbroath’s composition; an Arbroath 2020 festival was arranged but postponed due to the COVID-19 pandemic. The National Museum of Scotland in Edinburgh planned to display the document to the public for the first time in fifteen years. 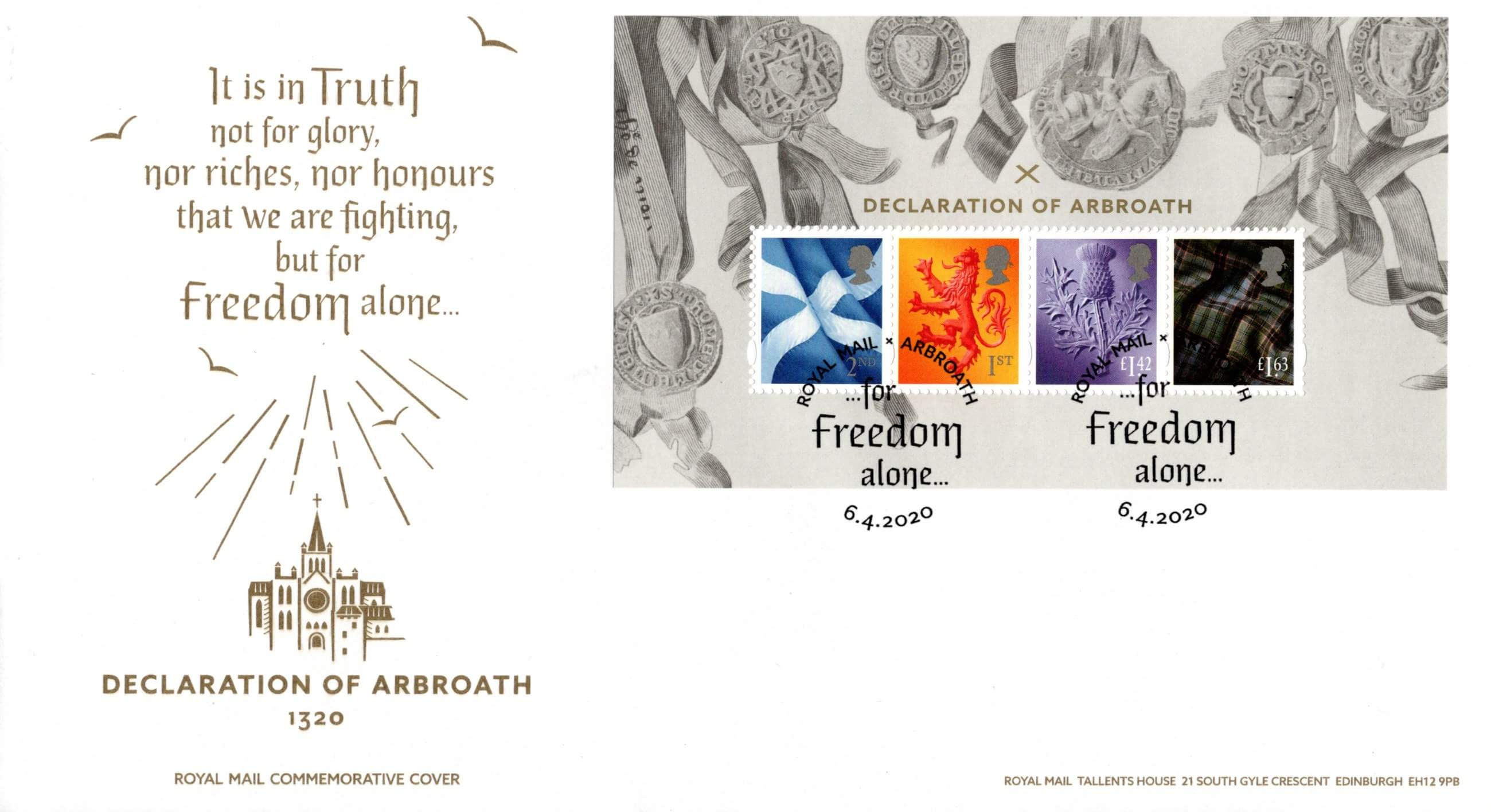 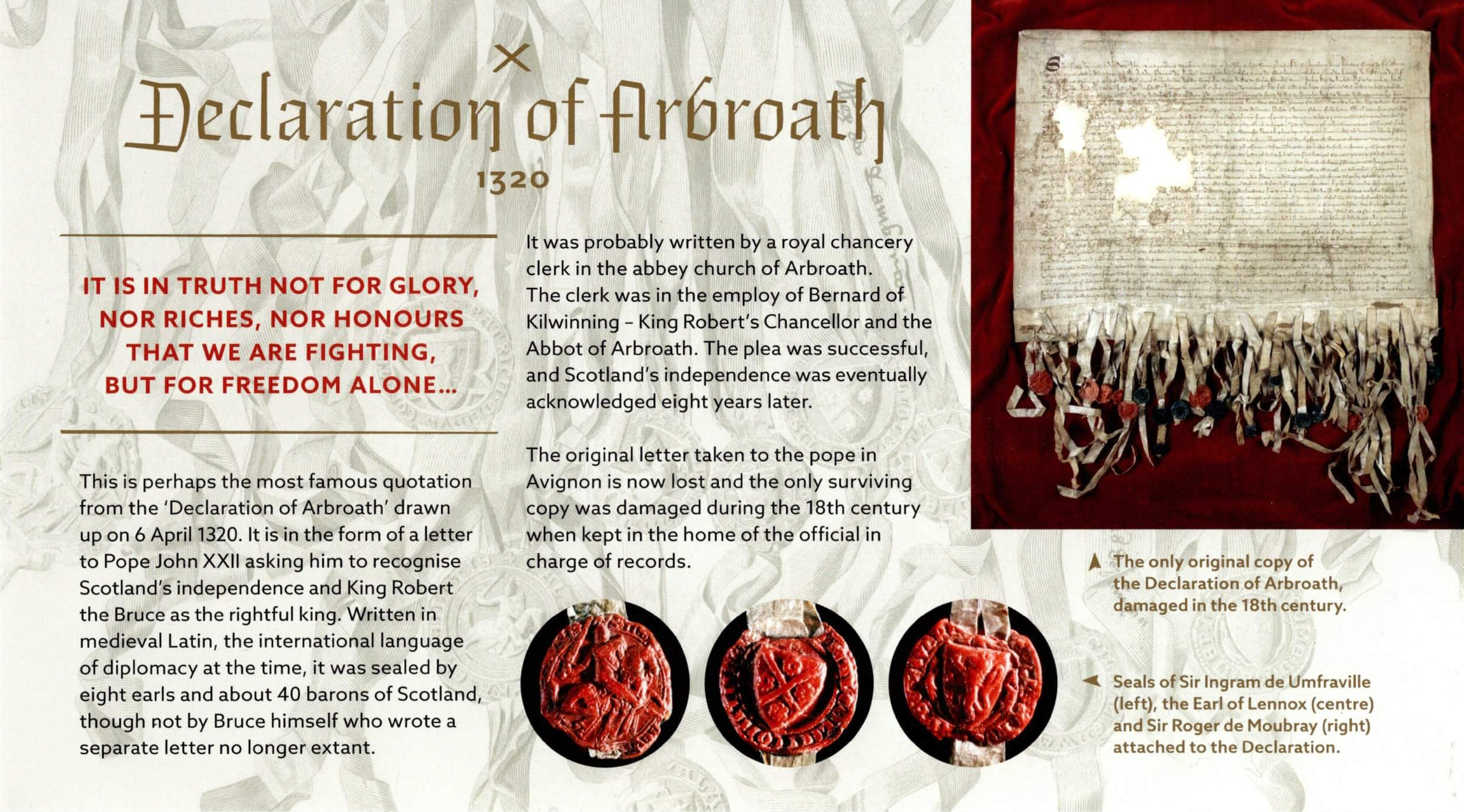 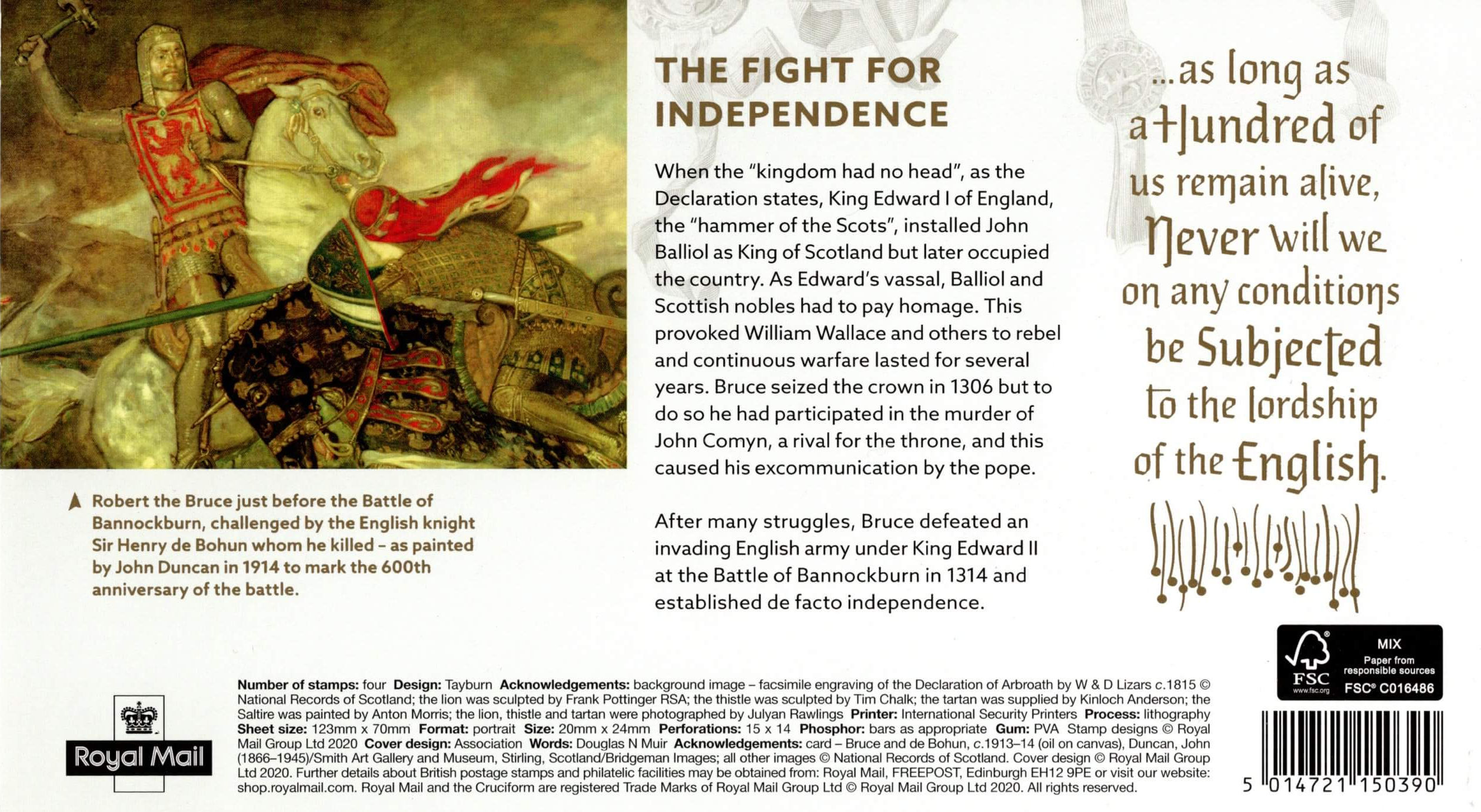