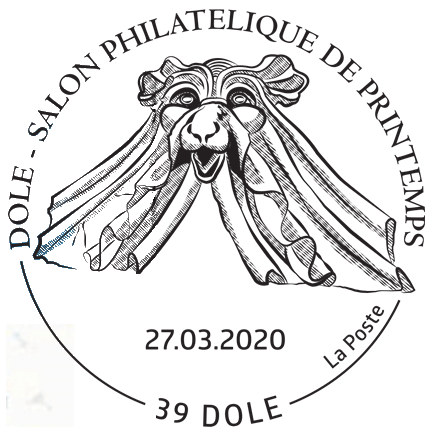 Each year, a stamp is issued on the occasion of the Philatelic Spring Fair. It will be available in preview from Friday 27 to Sunday 29 March 2020. It is Dole, in the Jura, which will host this event.

Dole, a town in eastern France, a sub-prefecture built on the banks of the Doubs, is known around the world as the hometown of Louis Pasteur. Clinging to a limestone spur, crossed by the Doubs and numerous canals, the city of Dole quickly developed around river activities (tanneries, mills, etc.).

In the XI thcentury, the city became the capital of the county of Burgundy and came under the domination of the Empire. Throughout the Middle Ages succeed Dole of emperors, such as Frédéric Barberousse, counts and dukes of Burgundy, like Charles the Bold. Very coveted, as much by the Habsburgs as by the Valois, the city is repeatedly the scene of clashes, as in 1479 when the city was razed by French troops. However, it remains in the hands of the Habsburgs (German then Spanish). The weakening of these during the Thirty Years War prompted France to resume the conquest of the county and its capital. Dole falls in 1678, the capital is moved to Besançon, the ramparts are destroyed, the city is now under French domination. The Dolois can boast a rich architectural heritage, the oldest traces of which date back to the 1st century AD – there are also many bridges, the most original of which is undoubtedly the Roman bridge – and a very important religious heritage. . The Collegiate Church of Notre-Dame, among others, built during the second half of the 16th century on an old religious building, presents the characteristics of Franc-Comtoise architecture: sober and elegant.

It is therefore good to walk in Dole … The historic heart will delight lovers of beautiful buildings and history; the proximity of the Jura vineyards and the local gastronomy will delight the most gourmets.

Dole is a French commune, located in the department of Jura in the Bourgogne-Franche-Comté region. It is part of the cultural and historical region of Franche-Comté, of which it was the capital until 1676.

It is with 23,708 inhabitants in 2017 the most populated city of the department of which it is one of the sub-prefectures . Its inhabitants are called the Dolois and the Doloises.