Irish women have long been pioneers and innovators both at home and abroad. Amongst the visionaries who encourage the continuation of their successes in a new generation of women in Ireland are: 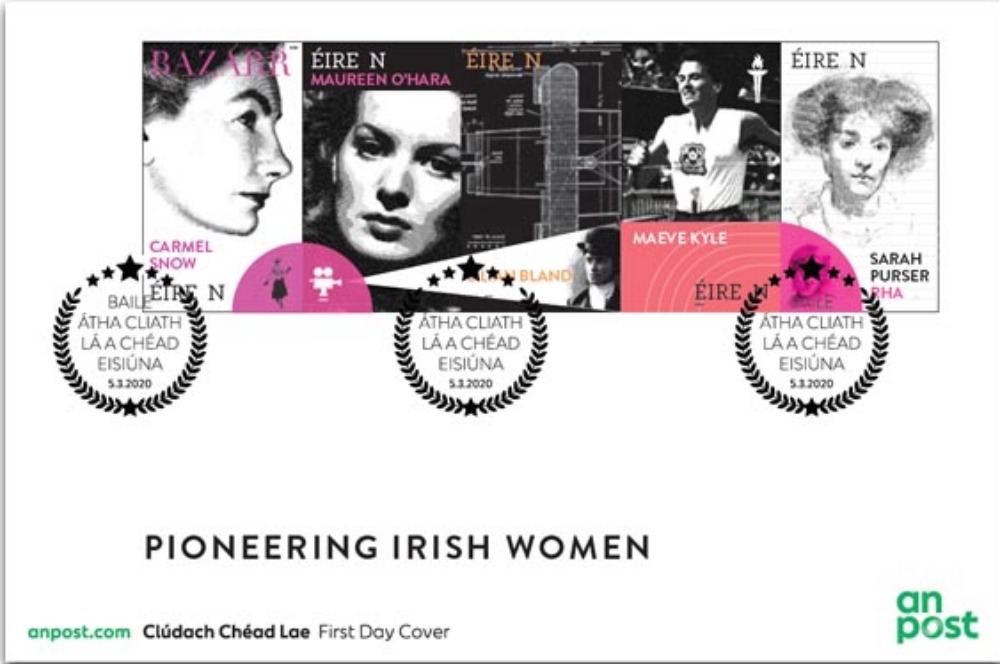 Hollywood legend, Maureen O’Hara, whose family roots are in Kells, is to feature on a postage stamp being issued by An Post for International Women’s Day.

Five ‘Pioneering Irish women’ are being celebrated in a set of colourful new stamps. These women chieved international recognition in fashion, film, aviation, athletics and art: Carmel Snow, editor-in-chief of the influential US ‘Harper’s Bazaar’ magazine from 1934 to 1958; Maureen O’Hara, a renowned Hollywood film actress and recipient of an honorary Academy Award in 2014; Lillian Bland, the first woman in the world to design, build and fly an aeroplane having built the ‘Mayfly’ in 1910, and successfully completed her first flight that same year; Maeve Kyle, was the first woman to represent Ireland at the Olympics in 1956, and also Ireland’s first triple Olympian and Sarah Purser, portraitist and stained glass artist was the first female member of the Royal Hibernian Academy in 1924.

Designed by Oonagh Young at Irish firm Design HQ, the stamps are available at the GPO, Dublin, selected post offices nationwide and online at anpost.com/shop, with free delivery.

Maureen O’Hara took on studio bosses, the US legal system, the tabloid media and American presidents at various stages during her lifetime.

In her memoirs, ‘Tis Herself’ Maureen Fitzsimons, to use her original name, recalls her father, Charles Stewart Parnell Fitzsimons, as a decent, honest man, born to farming folk outside Kells. “It was a country farm and many hands were needed to keep it running smoothly,” she writes. “Daddy, when he was a young lad, was one of 13 sons who helped his father work the land.”

Her father’s real passion was soccer. He played gaelic football until he was caught at a soccer match once and was kicked off the team, victim of the infamous ‘ban’.

“He later bought into Shamrock Rovers, and swore he would never go to another gaelic football match again,” O’Hara says. “He never did.”

The actress often returned to Kells in later years to visit her uncle Frank, a blacksmith on Farrell Street, and meet her many relations, some of whom still live in the area.

“Of course, Meath and Dublin were mortal gaelic football enemies, so it was a bit of a miracle that my parents ever married,” the actress recalls. “Mammy was a city girl and daddy was from the country. She was a Protestant and he was a Catholic. She eventually converted.”

When they married, they moved into a six-bedroom house in Ranelagh, Dublin, the house in which their six children were born, of which Maureen was the second oldest.

From her earliest days, Maureen was determined to become the greatest actress of all time. She went to elocution and drama school, singing and dancing classes, and, when she was 10, joined the Rathmines Theatre company. She began winning amateur acting competitions and feis events and, by 13, was hired to perform classical plays on Radio Eireann.

In 1934, she joined the Abbey, starting at the bottom of the ladder, painting scenery, building sets and sweeping floors, and eventually three years later was cast in a lead role.

She never got to play it, as she was spotted by American singer Harry Richman who brought her to London and introduced her to Charles Laughton, who, having seen her in a screen test, immediately signed her up with Mayflower Pictures on a seven-year contract.

It was the start of a film career which was to see her become one of Hollywood’s greatest stars, playing opposite all the leading men of the day from Tyrone Power and John Wayne to Henry Fonda and Jimmy Stewart.

Her first major film was as Esmerelda in ‘The Hunchback of Notre Dame’, in 1939, with Charles Laughton. Filmed in America, she recalled how they were scheduled to shoot one of the most important scenes in the film on the day World War II broke out, when Quasimodo rings the bells in the bell tower for Esmerelda.
Laughton began ringing the bells until it grew into something that transcended the film.

“The intensity of it grew, until I was shaking from the power of it. The sound was almost deafening. Everybody, including the director, was so overcome we all forgot we were shooting a scene. Dieterle forgot to call ‘cut’ when the scene ended, and Laughton kept ringing the bells until he collapsed.”

Afterwards, Laughton told O’Hara that it was all the people going out to fight in the bloody war he was thinking of while ringing the bells.

Alfred Hitchcock directed her in ‘Jamaica Inn’, and her first major film with John Ford was ‘How Green Was My Valley’ in 1941. But she’ll be best remembered for ‘The Quiet Man’, which was seven years in the planning with Ford, and saw her begin a life-long friendship with co-star John Wayne.

In order to get the financing for ‘The Quiet Man’, they had to agree to shoot a western, ‘Rio Grande’, as Republican Pictures thought the Irish-based film would be a flop.

Her brother, Charlie Fitzsimons, also an actor as well as a barrister, and Lee Lukather selected all the locations for John Ford, and shooting began on 7th June 1951. In the famous scene where she smacks John Wayne, O’Hara admits that she had a hairline fracture in her wrist after it.

Maureen Fitzsimons, whose name became O’Hara as Fitzsimons was thought too long for film posters, hadn’t a great amount of luck with husbands. Her first marriage to George Brown was forced upon her before she left London to film in America; her second husband, Will Price, was an alcoholic who beat her while she was pregnant, and almost left her bankrupt, and when she found happiness with pilot Charlie Blair, he was killed in an air crash.

She claimed there were  questions to be answered over Blair’s death in 1978. His aviation company had associations with the CIA, and she also suggests that he may have known too much about the location of various nuclear weapons during the Cold War. There was resistance from the powers that be in Washington to her burying her husband in Arlington Cemetery, and she had to threaten President Jimmy Carter with a long fight if she wasn’t allowed bury him there. The President then personally approved a well-located grave.

PRESEDENTIAL RUN-IN
It wasn’t her first run-in with a US President. She was shocked, when at dinner with President Roosevelt in 1941, he asked her “Don’t you know Ireland is a communist country?”

“He wasn’t asking a question at all, but stating a fact. I was astounded and insulted. I told him in no uncertain terms ‘I’ve never heard such rubbish in my life’. His eyes widened and I felt the weight of stares on me, but I continued anyway.”

But the President had his mind made up. When the actress applied for dual nationality in 1946, American as well as Irish citizenship, she was asked in court to forswear her allegiance to Great Britain.

She told the court officer she couldn’t do that, as she was Irish, and her allegiance was to Ireland. It transpired that everywhere she had filled in ‘Nationality, Irish’ on her application form, it had been crossed out with a pen and ‘English’ written. She said she would only do it if referred to as an Irish citizen.

The court clerk told her she’d need a court order. “‘Fine’,” I said. “‘When shall I come back to the court?’” The case was heard immediately,

And the judge challenged her assertions, too. “We kept going over it and going over it, back and forth, but I wouldn’t give an inch. I couldn’t. Finally, he said: “We’re going to have to find out what Washington thinks.”

Washington was contacted and said she was a British subject. She told them what to do with their American citizenship, but before she had left the courthouse, the judge relented. It was the first time in the history of the USA that the American government had recognised an Irish citizen as being Irish. Eamon de Valera, the Taoiseach, issued a statement backing her and formally requested to Washington that Irish citizens should not be classified as subjects of Great Britain.

O’Hara had another courtroom outing when she became the first movie star to win a libel case against an industry tabloid.

Confidential magazine reported that she had been carrying out lewd acts with a man in a cinema in Hollywood. The jury was even brought to the cinema to see the seat where the action happened. But, on the day in question, she was filming in Spain, and her passport proved her innocence.

The actress, known as the ‘Queen of Technicolour’, was upset at times that she wasn’t getting good scripts, because film bosses reckoned anything she was in would sell. She charts her stormy relationship with director John Ford, and her close friendship with John Wayne, known to her as ‘Duke’.

THAT WHISPER
“No matter what part of the world I’m in, I’m always asked – what did you whisper into John Wayne’s ear at the end of ‘The Quiet Man’?” she said. John Ford wanted Wayne to look shocked and told her what to say. “At first, I refused, I said no, I couldn’t say that to Duke but Ford wanted a very shocked reaction from Duke, and said I’m telling you, you are to say it.”

Having no choice, she agreed, on condition that it never be repeated or revealed to anyone. After the scene was shot, they told Wayne of the deal, a pact was made, and nobody knows what she said. Ford and Wayne brought it to their graves, as did Maureen O’Hara.

“Curiosity about the whisper has become a great part of ‘The Quiet Man’ legend. I have no doubt as long as the film endures, so will the speculation,” she said.

in 2014, Maureen O’Hara was given a prestigious Honorary Oscar Award from the American Academy. The Award was presented at the American Academy of Motion Picture Arts and Sciences’ annual Governor’s Ball in Hollywood as acknowledgement of a lifetime body of work by an extraordinary Irish woman. She died in October 2015, aged 95, having returned to Kells three years earlier to receive the Freedom of the town.