Issue Date: Saturday, September 26, 2020
Illustrated obliteration 1st day in the 92 cities receiving the Feast of the Stamp
Due to the COVID-19 pandemic, the Stamp Festival was postponed from March 28 to autumn 2020, between the end of September and mid-October, depending on the possibilities of each organizing association.
Check the FFAP website for information about each city – which will become clearer over the weeks – to find out if and when it will be held in the city of your choice.
The first day broadcasts that were cancelled during the containment dates indicated are those of the Feast of the Stamp which was postponed from September 26.
General sale on Monday, September 28, 2020 Info
Face value: €1.94 See fares as of September 28, 2020
Postage of the green letter of 20 to 100g for France, Monaco, Andorra and postal sectors (army)
Sheet with horizontal stamps – Serration : 13
Total dimensions: 105×71.5 mm
Colors In: polychrome
Printed in Offset
Issued to 400,000 copies 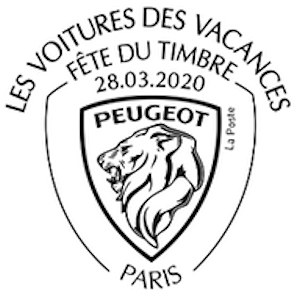 In 1937, France organized its first Stamp Day (Journée du timbre) and issued its first stamp commemorating the event in December 1944. This became the Stamp Festival (Fête du timbre) in 2000. It is organized each year by the French Federation of Philatelic Associations, in partnership with Phil @ poste and ADPhile, with one hundred cities participating each year. In such a way, philately is brought to the widest range of people as is possible.

The Stamp Festival usually takes place on a weekend in February or early March. However, in 2020, it was  originally postponed to the weekend of March 28 and 29 due to municipal elections. This will be the third year to feature Automobiles as the theme of the stamps. Due to the COVID-19 pandemic, the Stamp Festival was postponed from March 28 to autumn 2020, between the end of September and mid-October, depending on the possibilities of each organizing association.

The 0.87 euro stamp features a Peugeot 202 Cabriolet while the 1.94 euro souvenir sheet portrays a Peugeot 404 Berline.